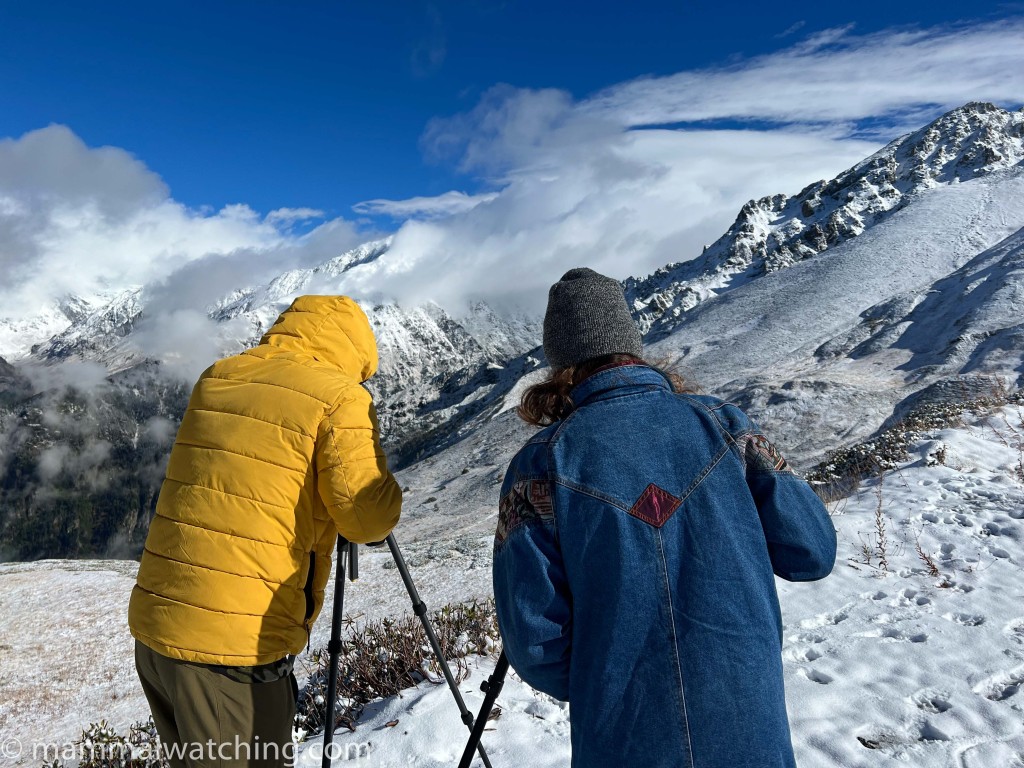 Looking for Western Turs near Mestia

I visited Georgia for a few days in 2017 and vowed to return after missing (the usually easy to see) Eastern Turs: too little time; too many clouds. In September 2022 my son and I went back.

The world has two species of tur: Eastern and Western. Eastern Turs are usually easy to see around the mountain village of Kazbegi. Western Turs were much more difficult. Back in 2017 I was told that the species were now only found in Russia – or areas controlled by Russia – and were off limits.

But in 2019 mammalwatcher Frans De Schamphelaere told me his contacts might be able to help me find a Western Tur in Georgia, though the species was far from easy (Frans guides trips to the region too). 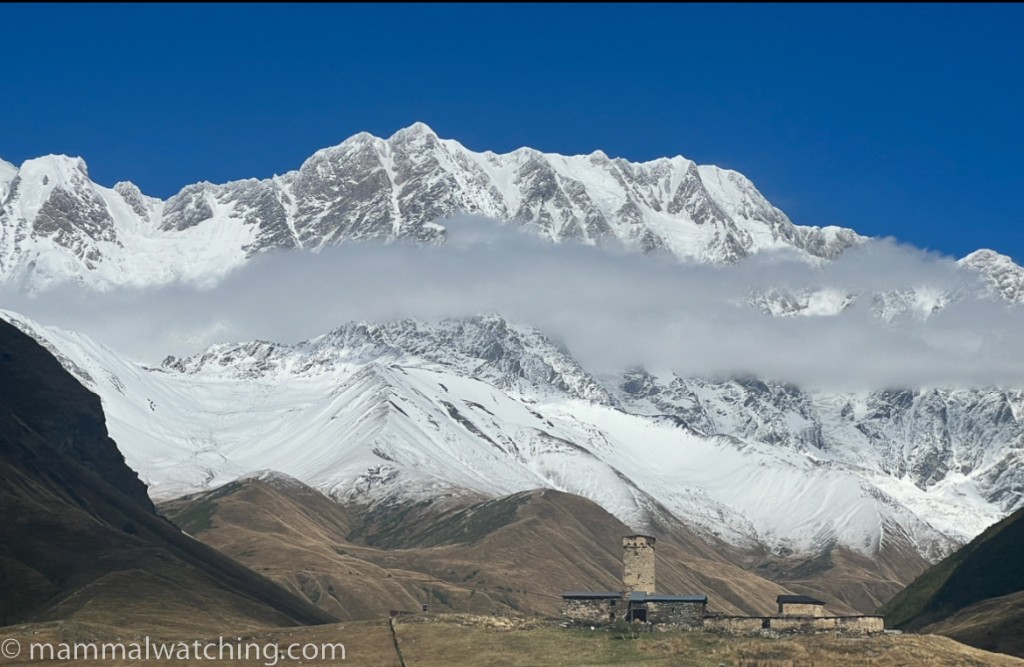 I contacted Frans for the latest post-pandemic information. He connected me with Gocha Kakuli, from a local bird tour  company, Batumi Birding, who have direct links to conservation in Georgia. After some negotiations about the duration and cost of the trip I settled on hiring a guide for a 3 night trip to Mestia.

Gocha hooked us up with Nika Kerdikoshvili, (find him on Facebook) who was also then independently recommended to me by Chris Townend from Wise Birding. Nika was fantastic. 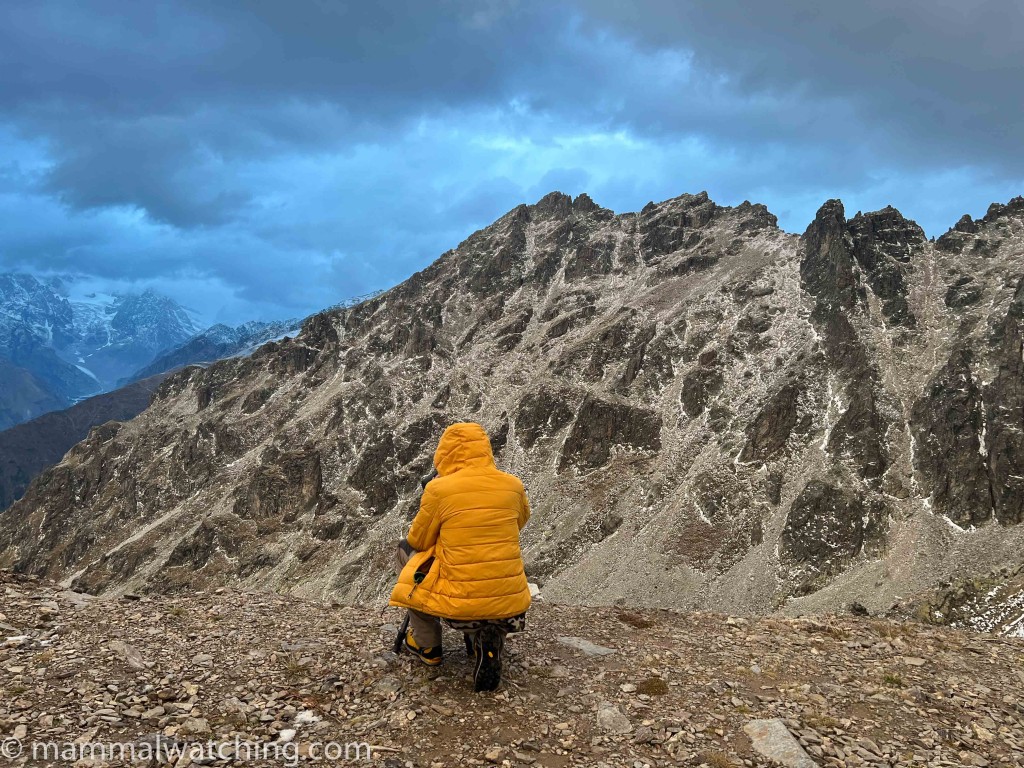 Nika is s a zoologist and spends most of his time working to protect mountain ungulates, particularly Turs. He knows the two species as well as  – probably better – than anyone. He is also one of the world’s great goat spotters. More on this later. Plus he was happy to do all driving, and had no fear of mountain bends or speeding tickets. If Formula 1 ever comes to Georgia then I will be betting on Nika as a wild card entry, particularly if he’s driving a Budget Rentacar SUV. Incredible.

Driving aside, Georgia is an easy country to travel around. The food is delicious and very cheap. There are religions – those which worship baked cheese and bread – that  believe the afterlife is a well stocked Georgian Restaurant. I booked hotels though Booking.Com and Expedia which were comfortable and very affordable. And when Nika wasn’t around I could usually find someone who understood English or my hand signals.

Google claims it takes 8 hours to reach Mestia from Tbilisi.  It took Nika 6. It would have taken me 12. We spent three nights in the village, in Beko’s Garden Inn which was clean and cosy and $40 a night.

Nika planned to focus our efforts on two areas. One spot, 45 minutes from Mestia, offered a slim chance to spot Western Tur. The other, a valley above the village of Nakra, right on the border with Russia, gave a better chance. Though Nika said we would have a much better chance if we spent a week hiking in the mountains: a three day walk could get us to a valley where he nearly always saw the Turs.

But we didn’t have a week so put our hopes on spending the evening and early morning  close to Mestia on our first and last days, with the two full days in between above Nakra. 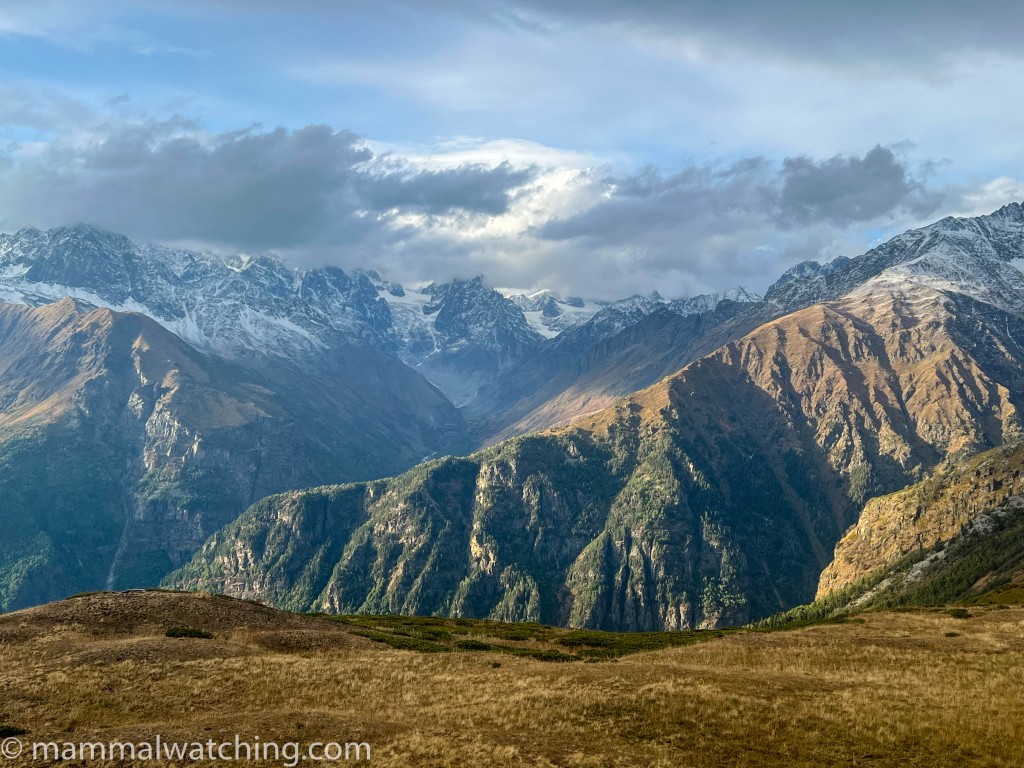 Hunting is a Georgian national pastime, and the few hundred Western Turs left in Georgia are under real pressure. If someone wants details of the places we went then send me an email, but Nika asked me not to share them here. Primarily because the local hunters believe the Western Turs have largely disappeared. The few animals that are left are now so wary that they are all but impossible to spot without scopes and without Nika looking through them. So even if with our location details I would imagine your chances are extremely slim without Nika’s help. Spotting these goats made Snow Leopards seem easy.

To complicate things further, reaching the site above Nakra involves navigating a series of tracks that are a long way away from ever appearing on Google Maps. You will also need special police permits as the area is right on the Russian border. Gocha had to organize these for us in advance. 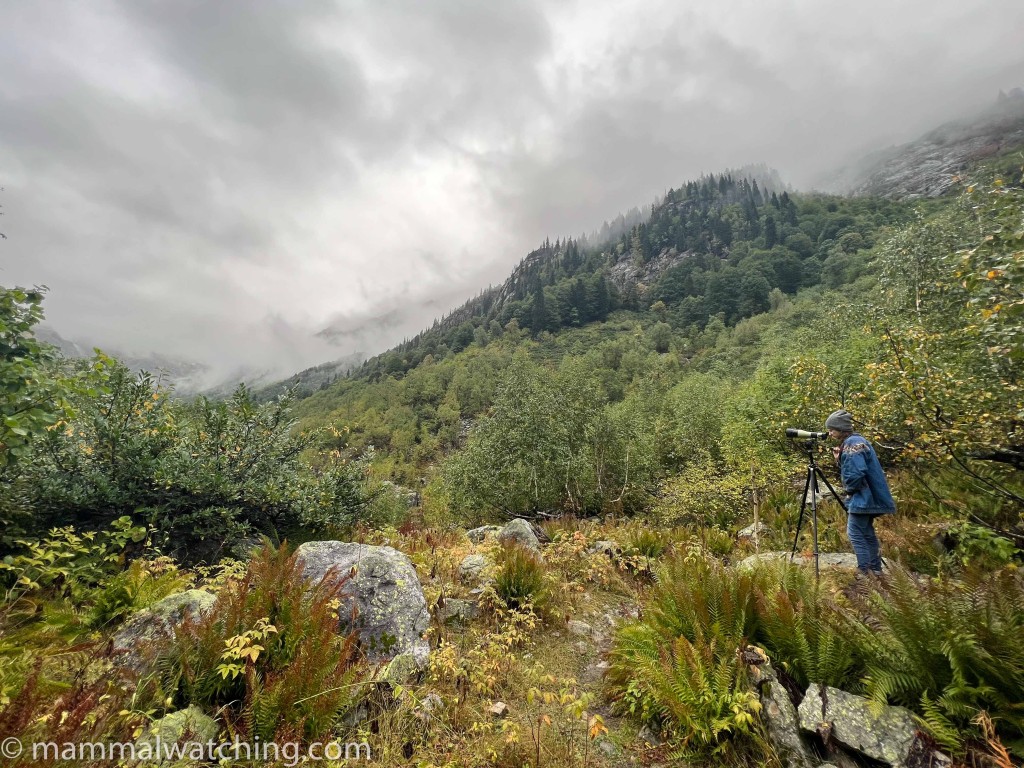 Looking for Western Tur above Nakra

We landed in Tiblisi at o5.30, met Nika, collected our unlucky rental car, and got to Mestia by 15.30. At 1700 Nika took us to the first tur spot. Turs spend most of the day lurking in shadows on the rocky mountain side. They usually only appear around dusk to move down the mountain to feed at night. 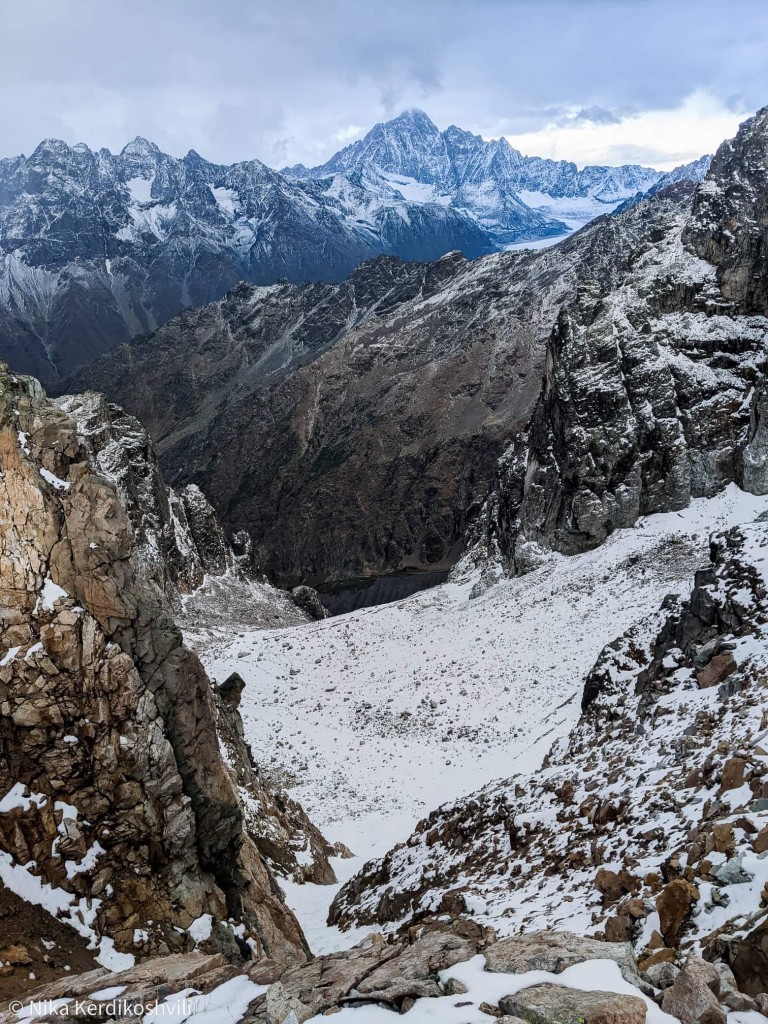 We saw no mammals during our first evening.

We left at 0500 the next morning for Nakra, arriving at the police post at the very end of the track at 0700. And it started to rain. Heavily. The three of us stayed in the car an waited. All day. I woke up every hour or two. Looked out the window. And closed my eyes again.

By 1730 the clouds were still hanging low but the rain was easing so we walked a kilometer up the valley in case the clouds cleared before sunset. Occasional 30 second windows of opportunity would open through the clouds, but – not surprisingly – we did not spot a Tur. A Stone Marten on the road back to Mestia after dark was the only mammal. Not long after the sun set the rain stopped and the skies were a mass of stars. Tomorrow would be different.

It wasn’t. This was a Georgian remake of Groundhog Day. Though look carefully and you could notice that the rain was a little heavier and the clouds a little thicker. We didn’t even try to walk up the valley today. Most of the drive back to Nakra was along a river that used to be the car track.

I spent dinner eating enormous quantities of cheese bread and counting my losses. How was I ever going to see a Western Tur? At one point I found myself contemplating joining the Red Army for a few days to  get posted to the other side of the border,

Even Nika was no longer radiating the optimism he had managed to maintain so far. We now had only a few hours the next morning before we had to leave for Tbilisi so Patrick could catch a plane.

But … but .. but the weather forecast was flirting with me: sunshine at 9am it teased.

It had snowed overnight in the mountains. The first snow of winter. This – Nika said – was a good thing for tur spotting. It would encourage the animals to stay lower down the mountain and the white background would also make them less camouflaged.

But at 0700 the clouds were thick and low and largely shrouding the mountains. We started scanning. By 0900 the view was more sunlit than cloud covered. And at 1000 Nika quietly announced “I’ve got them”.

I did a joyful jig as I walked to his scope and stared through it. After 2 minutes realized he must be talking about the two tiny rocks in the middle of the scope. I was far from convinced they were alive. And then one moved. 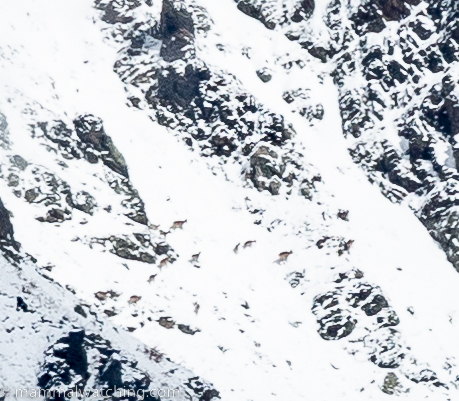 And then we saw two more. And another. And then there were 16 Western Turs. 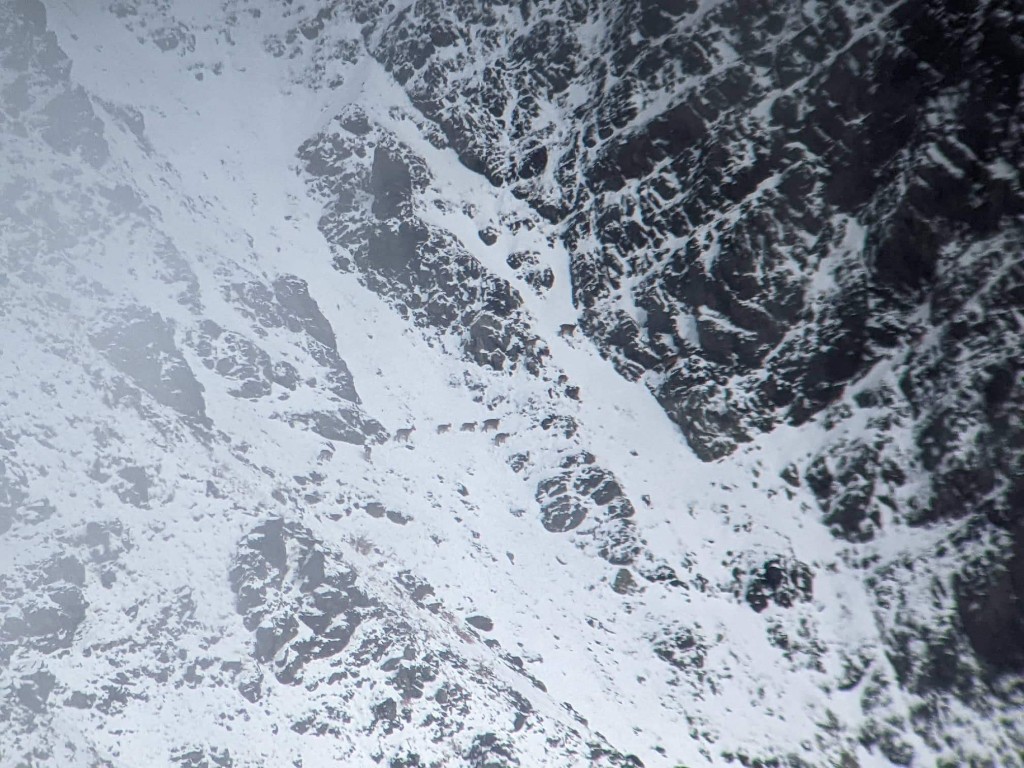 It is hard to exaggerate how difficult these were to find. Especially the two that Nika spotted first:  motionless animals sitting down.

Here is a picture of the mountainside taken though a 500mm lens after the animals had moved to the middle of a snow field and were much easier to spot. 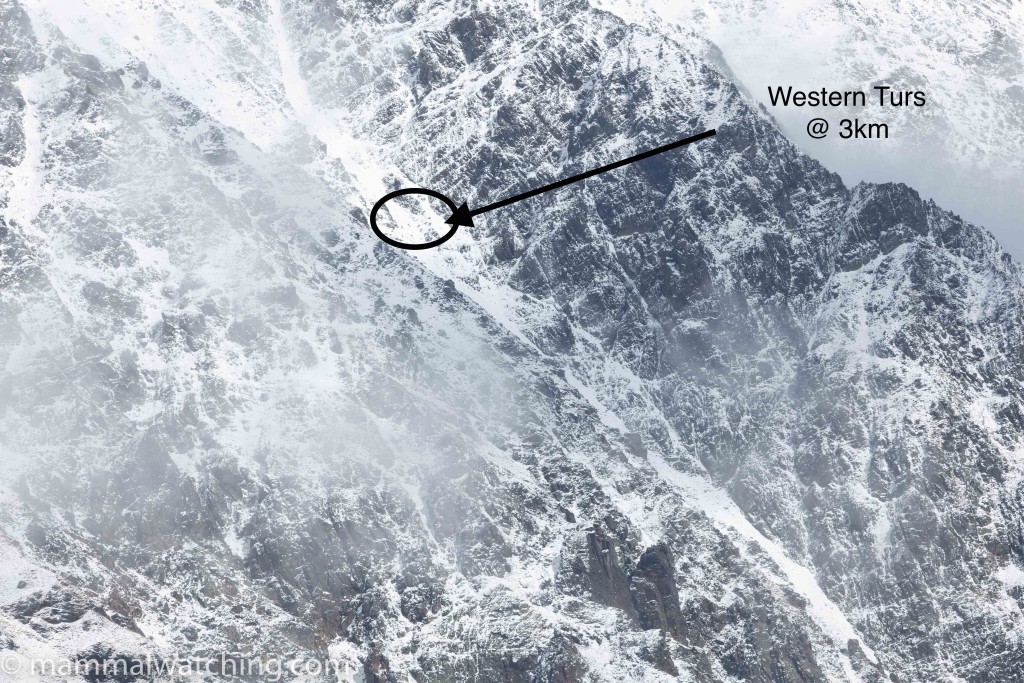 We spent the rest of the day driving back to Tbilisi on the slow and spectacular road through the mountains, Europe’s highest village (Ushguli) and some of the best scenery I had ever seen. In 24 hours we had run the full gamut of mammalwatching emotions from rain soaked turless misery to sunny post Tur ecstasy. Life was good again. 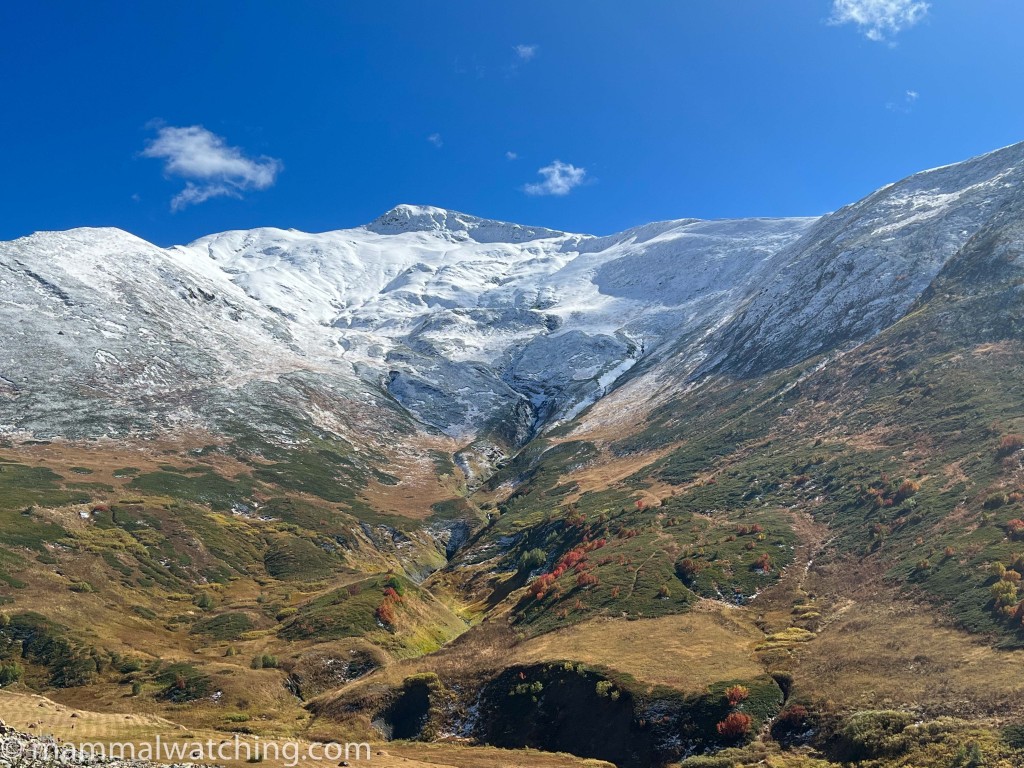 And, with some supersonic driving, Nika even managed to get Patrick to the Katski Pillar monastery before sunset. No mammals there but it was worth a look. 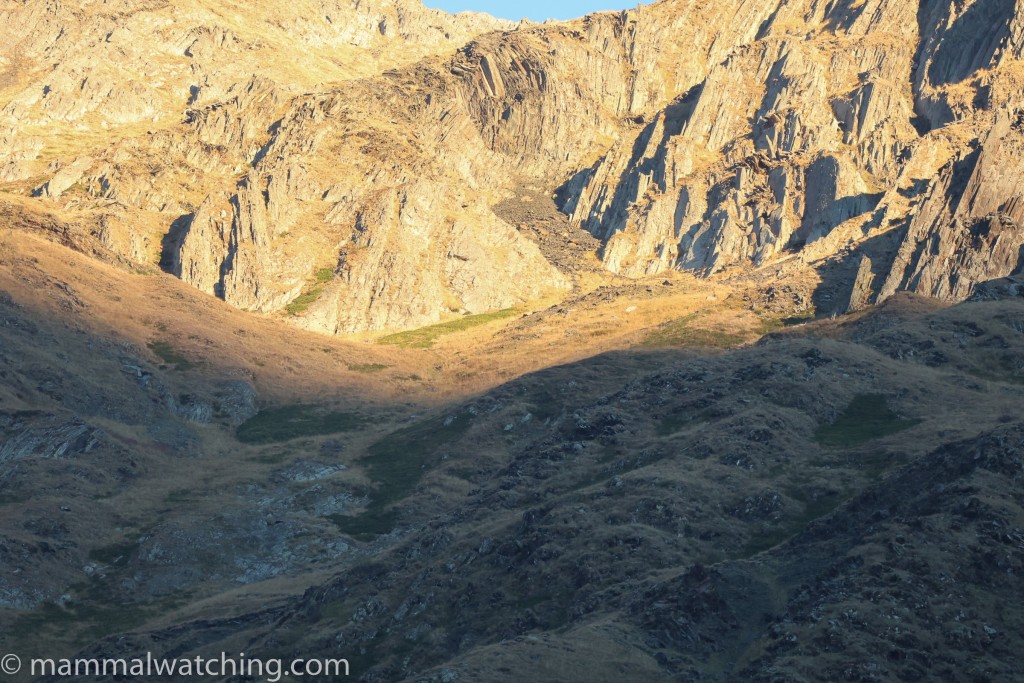 Most of the reports on the Georgia page have information on the Eastern Turs at Kazbegi.

It takes about 3 hours to drive to this popular little tourist town from Tbilisi. I drove down alone for a night after putting Patrick on a flight back to the UK. The town sits on the border with Russia, a border that Russia had closed a day or two earlier largely – I suppose – to stop Russian’s from escaping conscription.

Thousands of trucks were parked along the highway, stranded and unable to enter Russia. The town itself was full of Russian tourists. I got the sense that the locals were not too thrilled about this. 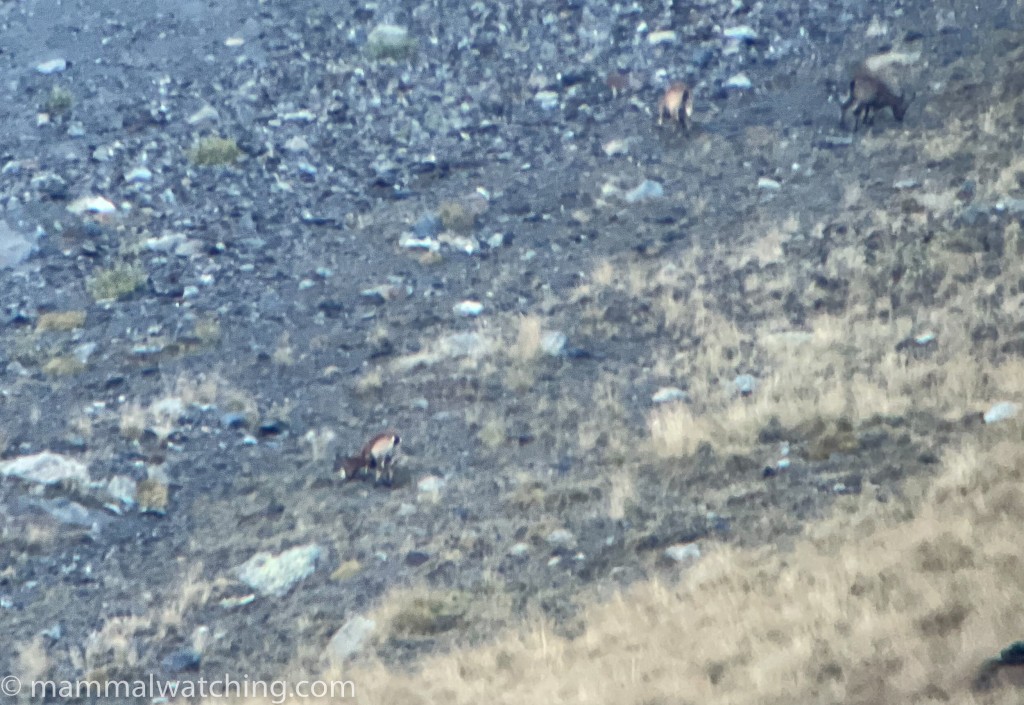 The weather was good and I saw Eastern Turs well – but distantly – in the last hour of sunlight and at dawn the next morning. You can likely spot them on any of the mountains towering over the village, by scanning from vantage points around the village itself. Frans recommended this spot and this spot and I saw Turs through a scope at both places. There are chances of seeing Wolf, Bear and Lynx anywhere here. 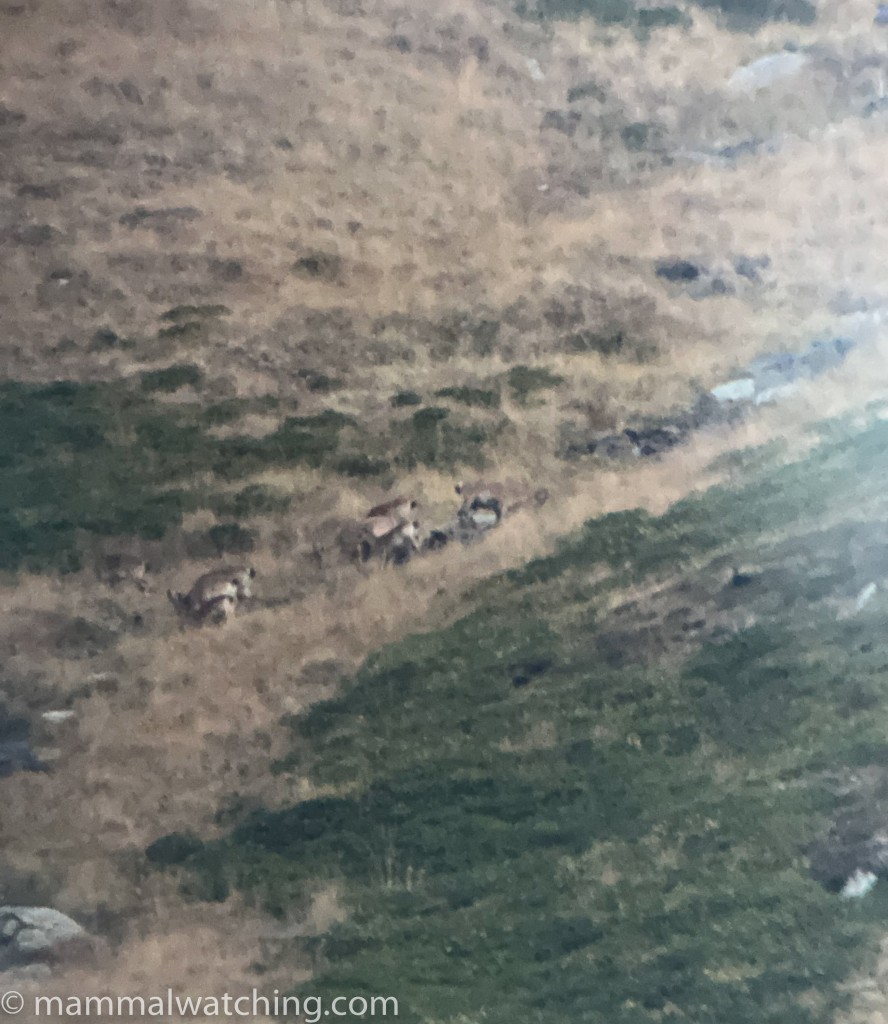 Rubbish pictures – digi-scoping is not my thing it seems – but good views.

And just like that I had seen all of the Capra goats.

A very big thank you to Frans De Schamphelaere (who was also giving me real time help in Kazbegi), Gocha from Batumi Birding for setting this up and – of course – the legendary Nika Kerdikoshvili. These are the guys you need on your team if you are going to see a Western Tur. 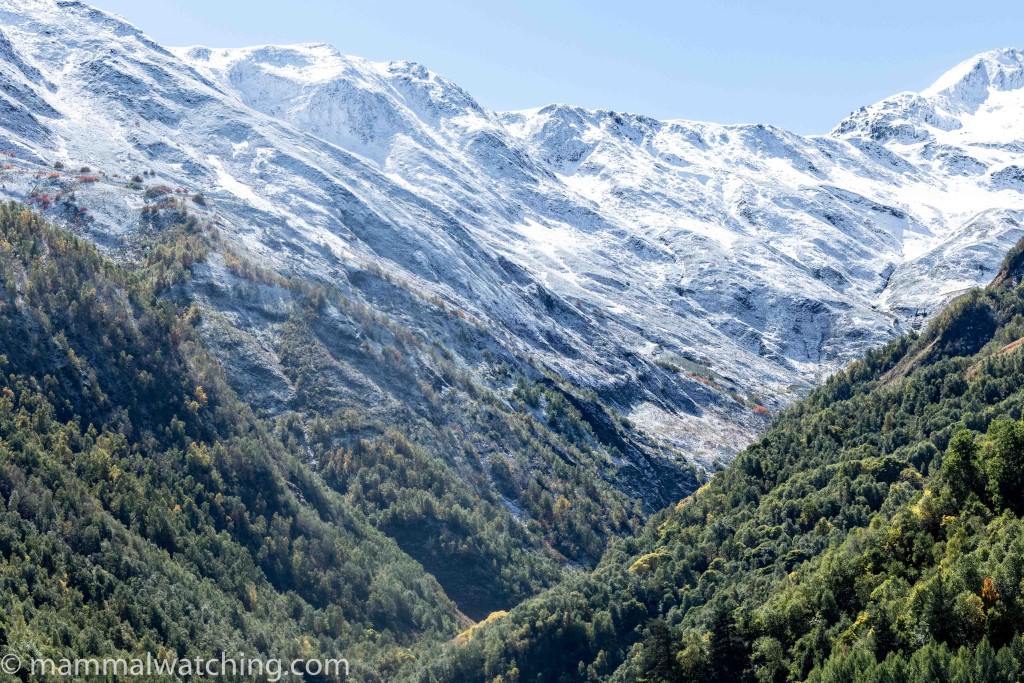