I spent a month mammal watching in S.E. Asia during the early part of the rainy season in September 2004. There were plenty of animals to see, though wherever I went people would tell me that mammals (or at least the ones I was looking for) were easier to see during the dry season … but I suspect that is true only of certain species. I’d been told the opposite when I had visited Thailand during the dry season! Perhaps because the questions I asked related only to the species I hadn’t seen, the answer might be expected….

Primates and squirrels were easiest to find in the very early morning (from just before dawn for the next two hours or so). The late afternoon was generally less good, and I tried to catch up on sleep most days after lunch, so don’t know much about mammal activity then. Spotlighting was fairly hit and miss: the abundance of animals was hard to predict or relate to the vagaries of weather or moon cycle. Heavy rain seemed to make the animals hard to find, but (and based on one night in particular) I found the hours immediately after heavy rain to be particularly productive for seeing stuff, especially along the road, along which I imagine some species may choose to travel to avoid the sopping went forest. 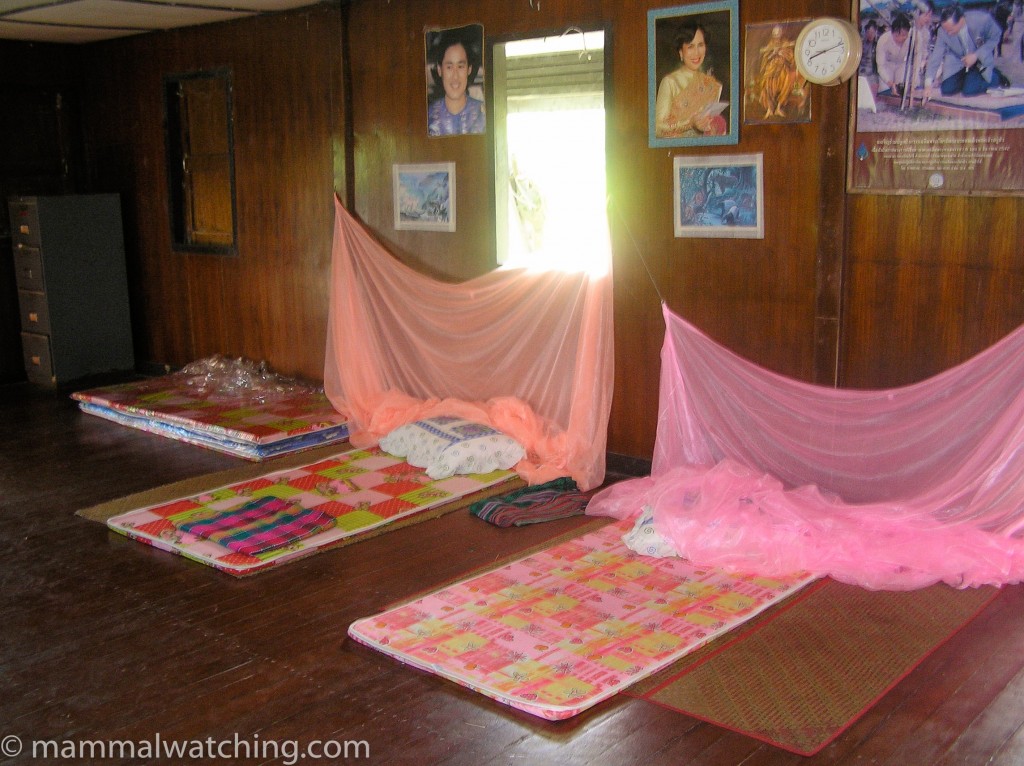 I used the wildbirdeco tour company for some of my stay in Thailand and then travelled on through Southern Thailand and Malaysia with a friend, who used to be one of their guides, Rattapon Kaichid, aka “Tu”. Tu now offers his own tours as a guide. He is a truly excellent naturalist and an extremely nice guy. 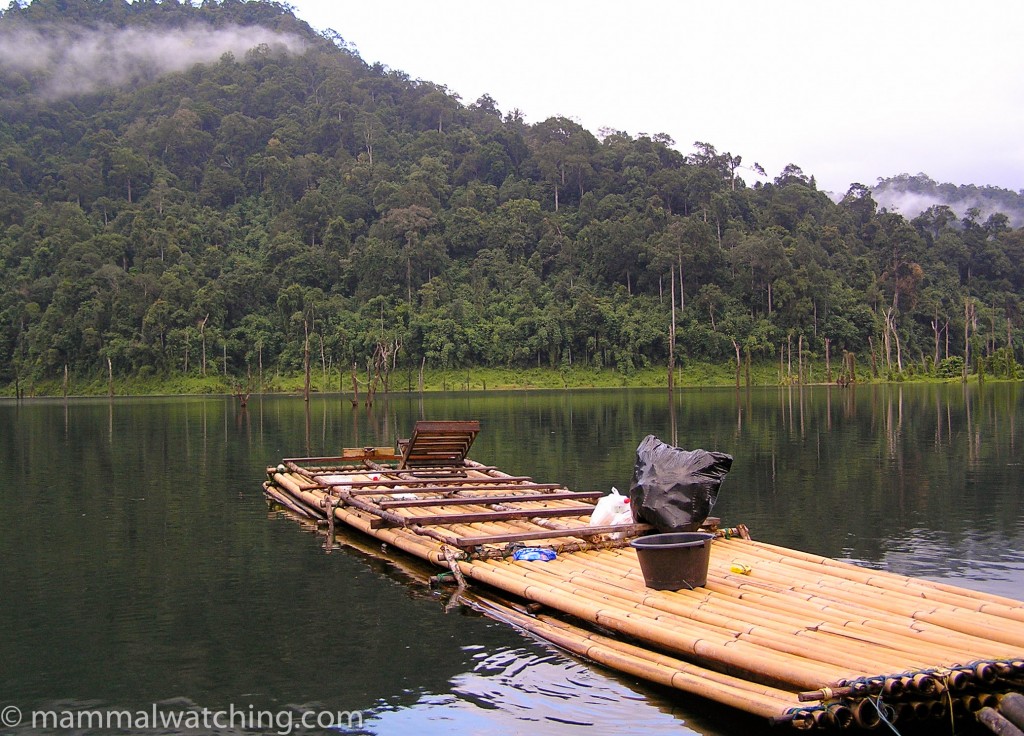 Klong Yar: The view from the front door

I stayed at the Klong Yar Wildlife Research Substation for three nights. This floating shack, the size of a portacabin, had no power or water, other than the river. I was apparently their first paying guest.

The substation is set in a spectacular stretch of riverine forest, two hours upriver from the Ratchaprapha Dam near Khao Sok national park. This is pristine jungle, with no villages and just the occasional passing fisho. A fantastic place, and all the wildlife watching was done from the long boat which made for a very relaxing stay. 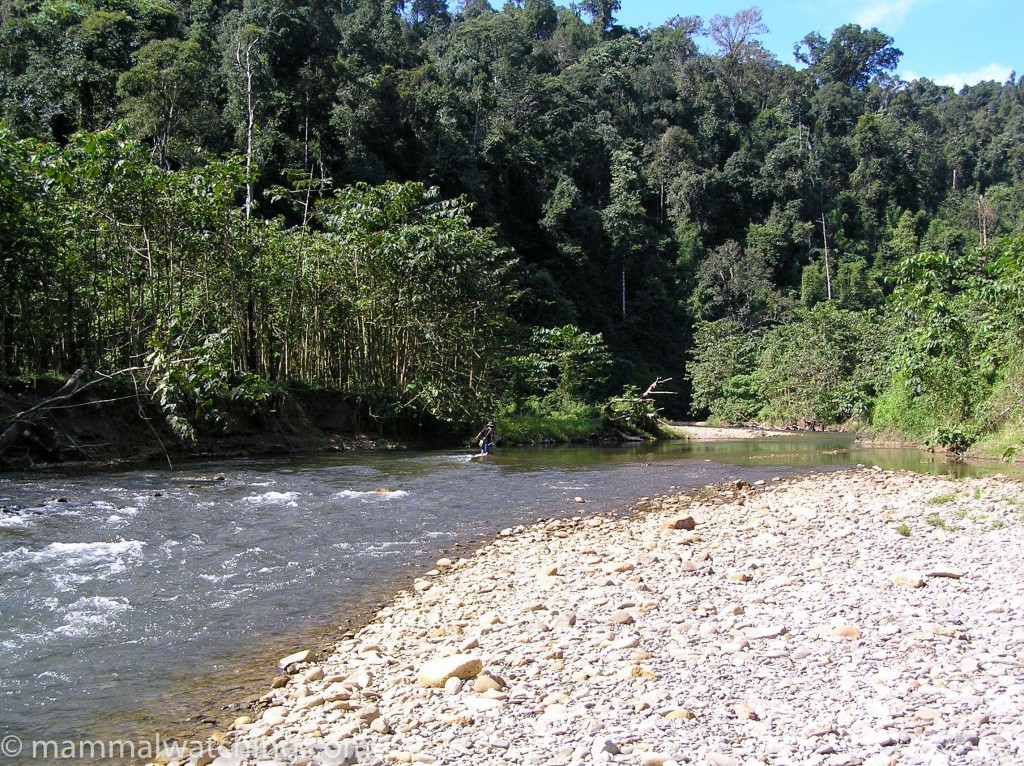 The full moon, and rainy season, didn’t – I was told –  help the mammal spotting. But Smooth-coated Otters were quite common: I saw several in the early and mid-mornings in the main river and a tributary. The best technique to see these was to sit quietly on a likely looking stretch of river and wait. Rivers with deep pools seem popular with both this species and Small-clawed Otters, which were said to be equally common (though I missed them). Both species are active all through the day though perhaps more so in the early morning.

This is also a very good area to see Serow and I just missed several and one had been feeding on the river bank opposite the accommodation for three mornings immediately before my arrival. But despite spending many hours spotlighting for them I missed them, though others in the camp saw them while we were out looking. Early morning and night are the best times to look. 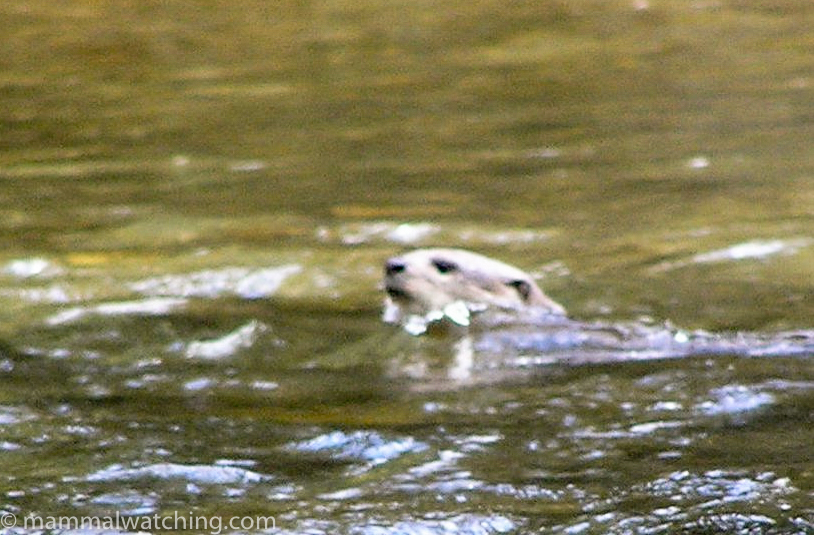 Spotlighting from the long boat found Yellow-throated Martens, a Colugo, a Leopard Cat, Slow Loris, Lesser-Mouse Deer, Sambar and Northern Red Muntjac. During the day Dusky Langurs were common, as were White-handed Gibbons. I saw a Black Giant Squirrel and a Wild Boar and we heard Banded Langurs too. 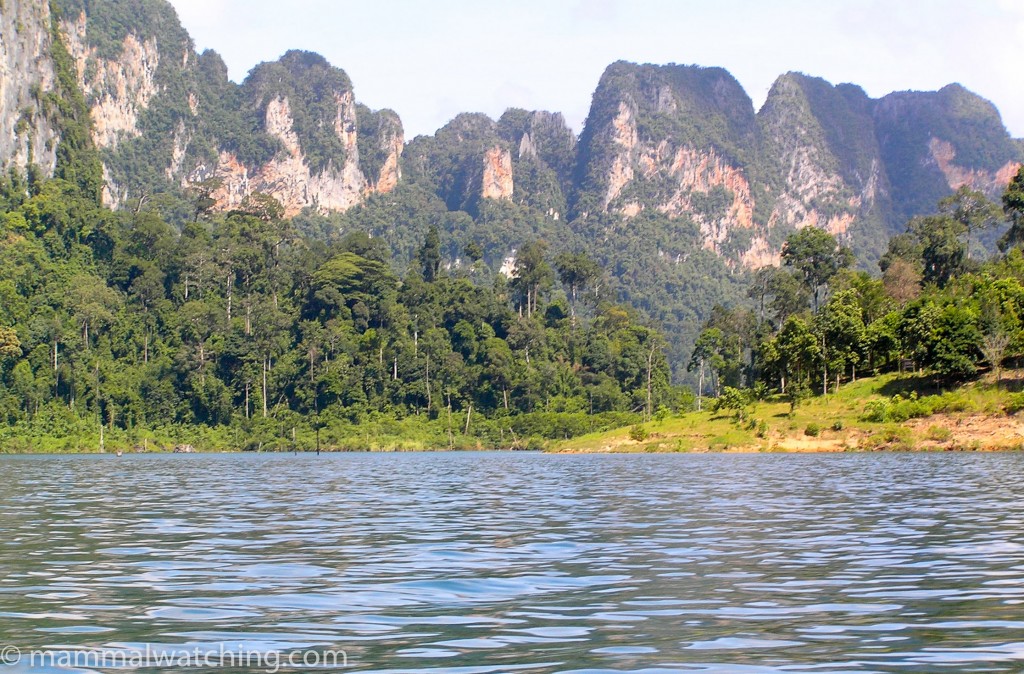 There’s a large colony of Flying Foxes (Pteropus vampyrus) near the national park rest house, quite near the Ratchaprapha Dam, and this is also a favoured spot for Serow watching. But we didn’t see them there either, much to the disbelief of my boat driver and chief spotter.

This is a fabulous place to stay, where Tapir are not uncommon and Clouded Leopard and Sun Bear are fairly regular visitors to the salt licks inside the forest. I want to return in the dry season.

I only spent a night here en route south, as I’d already visited this park in January 2004. Intermediate Roundleaf and Black-bearded and/or Long-winged Tomb Bats were common in the cave above the temple in the village, where there was also a single Intermediate Horseshoe Bat (all species were ID’d with the aid of a very nice spotting scope and a very powerful spotlight). We spotlit a Common Palm Civet around the café that’s about 3 km up the main trail in park: it was a regular visitor we were told. Banded Palm Civets are quite often reported here too. 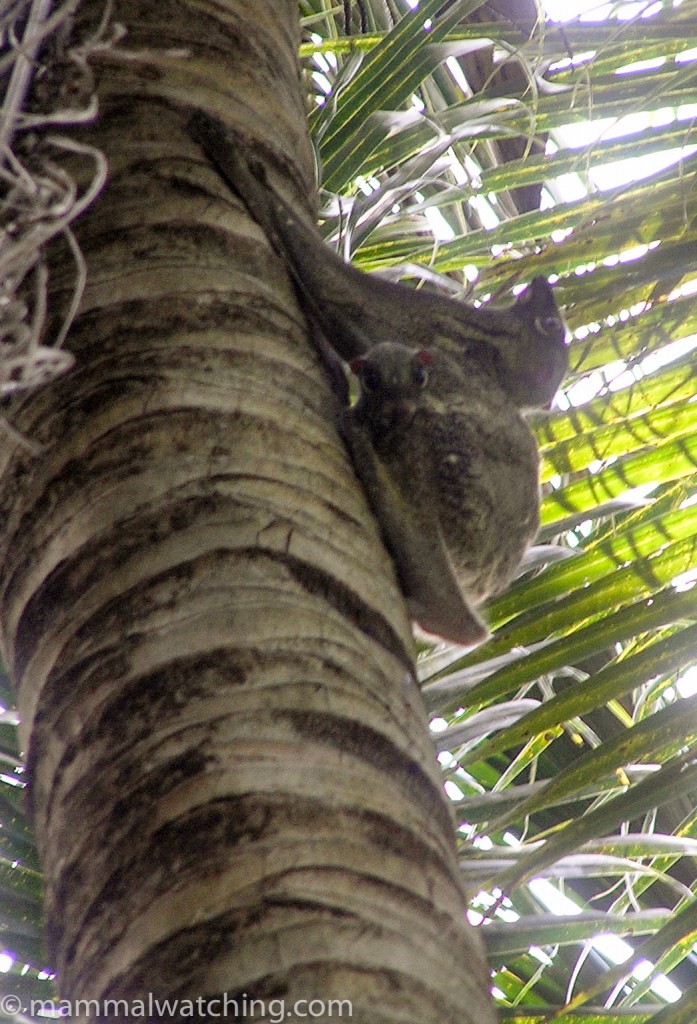 Despite the official advice to defer all non-essential travel to this part of Thailand I was assured by the locals it was safe, and I didn’t get the sense of any security worries as I was travelling around. I stopped en route at a village on the outskirts of Budo National Park to watch a Colugo that the locals had been staking out for Tu in the coconut palms. She was carrying a baby and we had wonderful views as she glided over our heads at 4 p.m.

Hala Bala is famous for its hornbills, but there are some nice mammals too. Tigers are occasionally reported from here, and the park is reputed to have a good population of pangolins. I was told that  a large number of pangolins smuggled over the Thai border were supposedly released here by the authorities after they apprehended the smugglers.

The weather was very wet while I was there. Spotlighting in the drizzle found several Red Giant Flying Squirrels and little else. In the early morning we saw Slender and Black-banded Squirrels and a Black Giant Squirrel, as well as Dusky Langurs. We heard Agile Gibbons and Siamangs (the former are commonly seen, the latter rarely so) but didn’t see any of either flavour. I trapped a Polynesian Rat near the accommodation.

One of the park rangers, Kla – who is studying bats – showed me roosts of Lesser False Vampire Bats (Megaderma spasma) and Bicolored Roundleaf Bats(Hipposideros bicolor) both roosting in culverts about 500m from the centre. We set a harp trap that night, despite the torrential rain, and caught a single Malayan Horseshoe Bat (Rhinolophus malayanus). 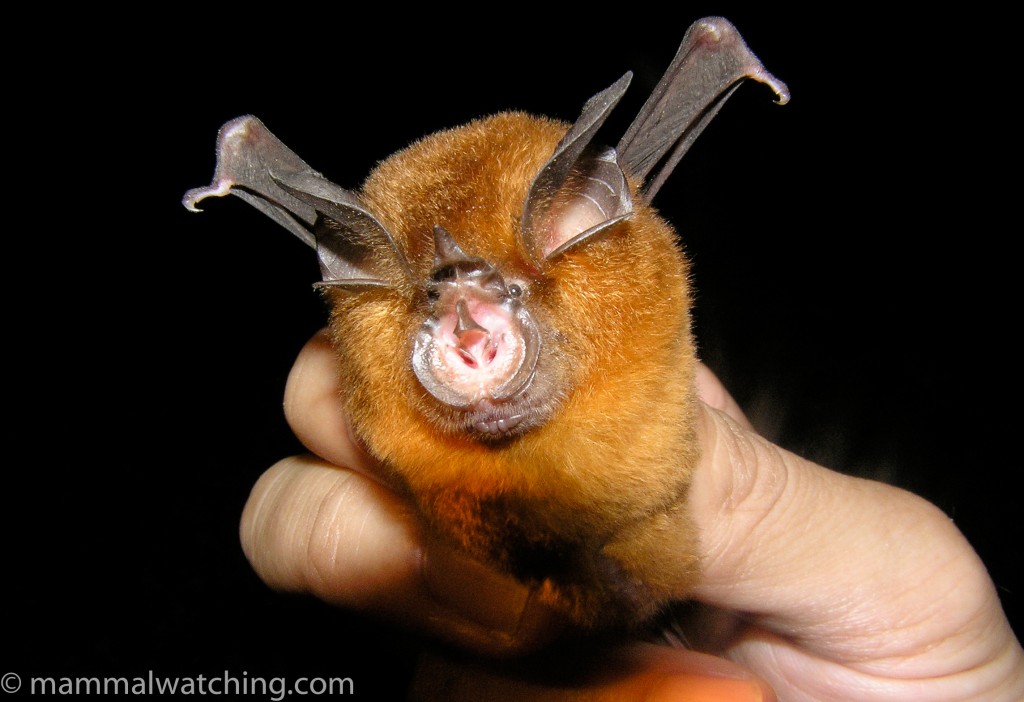 To set the trap I had to carry all the aluminium poles (pointing up to the sky) while riding pillion on the back of Kla’s motorbike as we sped along a mountain pass, at dusk, with no headlight, in the pouring rain, with lightning cracking directly overhead. I was genuinely surprised to survive. Once I recovered I saw some more Red Giant Flying Squirrels and little else while spotlighting that night.

Somewhere else to return to and hopefully do some more intensive bat catching.