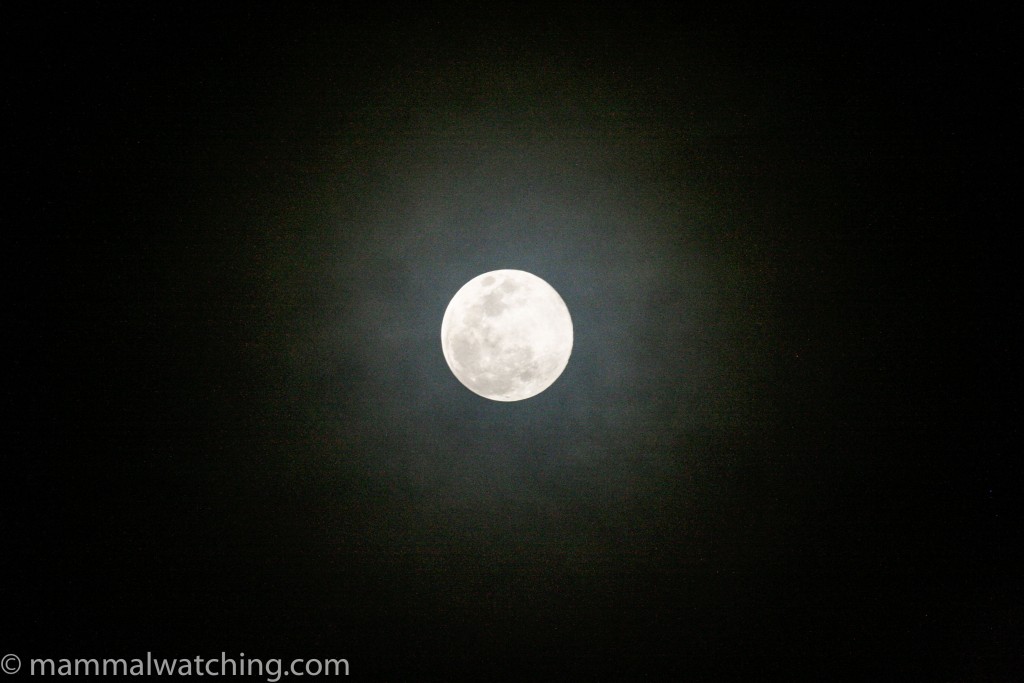 I was in Bangkok for work and had a free weekend in December 2007. This was my fifth visit to Thailand and it was getting progressively harder to see new mammals, especially within a day’s drive of Bangkok. But my mate Tu, who has recently set up his own guiding business, is well connected and he thought a return trip to Hui Kha Kaeng National Park could be productive. I’d visited there in 2004 and was disappointed then because the park (actually a wildlife sanctuary) was very strictly controlled and we were not allowed to drive anywhere. But now Tu knew ‘someone’. 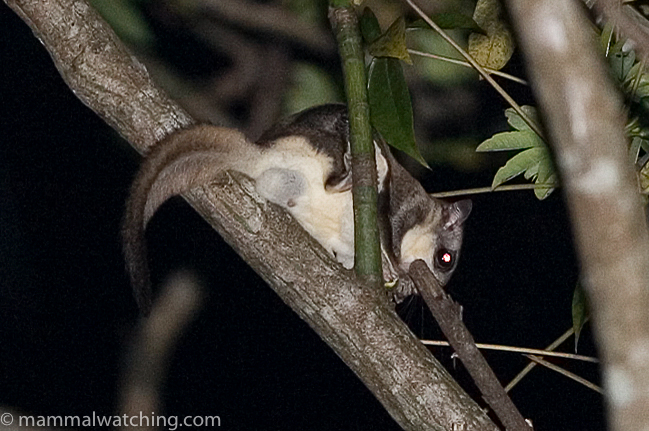 Hui Kha Kaeng (HKK) is a world heritage site. It is part of complex of protected areas that cover a massive tract of Thailand’s western forest and boasts just about all of Thailand’s larger mammals, including Tapirs, Clouded Leopards, Golden Cats, Wild Water Buffalo and Banteng. And it was the Banteng I particularly wanted to see because they are relatively common in HKK and very hard to find elsewhere.

We arrived late at the Thong Phak substation at one of the park entrances. We weren’t allowed to drive into the park after sunset so set up camp and went for a pre-dawn walk along the road into the park. The only mammals were a Variable Squirrel and some Long-tailed Macaques, both post-dawn and back at the substation. Some tracks on the road were, the gate guard said, from Banteng. They were huge.

The park HQ is 10 km down the road and Tu had arranged a research bungalow and a guide for us there; privileges not usually granted to tourists. We spent the afternoon in a hide that we set up overlooking a bend in the river a few kms from the HQ, where there was a chance both for Banteng and Short-clawed Otters. While we were eating lunch – and before moving into the tent – three Dholes popped up about 20 metres from us. Needless to say they didn’t hang around. The next four hours were spent sitting in the tent. No mammals. Mr Hua, our guide, went off to spend the afternoon at a different bit of the river and saw four Banteng. Bugger. 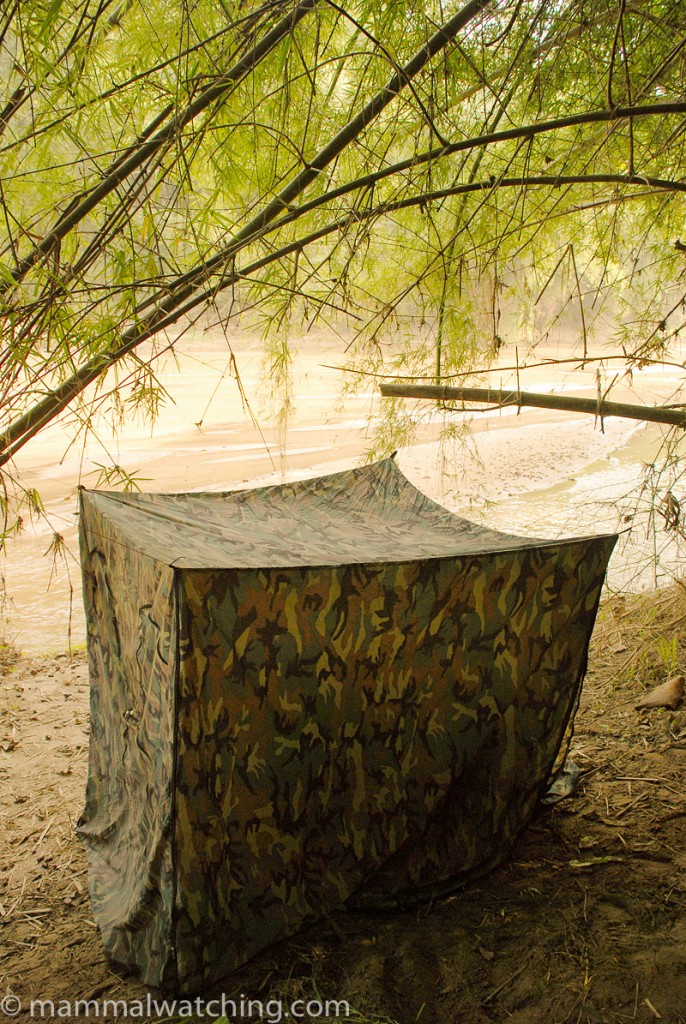 As a special favour, the rangers allowed us to take a night drive along the road from the HQ to the Thong Plak substation. It was a full moon so we weren’t sure whether it would be any good. It was. Sightings included a couple of Siamese Hares (common in HKK), four separate groups of Sambar Deer, a Northern Red Muntjac and a couple of Golden Jackals (the Jackals were rather more attractive than teh species usually looks in India or North Africa). 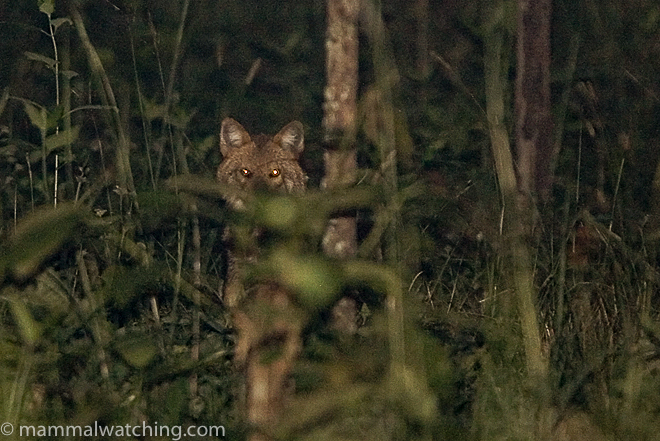 The road passes a salt lick and a massive male Banteng was in residence. Judging by the number of tracks we saw, these animals must be quite common, though sightings are by no means guaranteed. 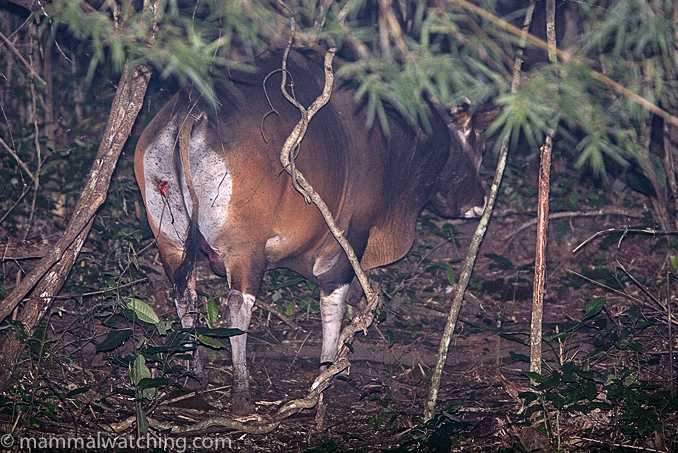 We spent the next day back in our tent hide, this time overlooking a natural salt lick a couple of kilometres north of the HQ. It was riddled with tracks and during the walk in at about 8 a.m. we saw an Elephant just off the trail. 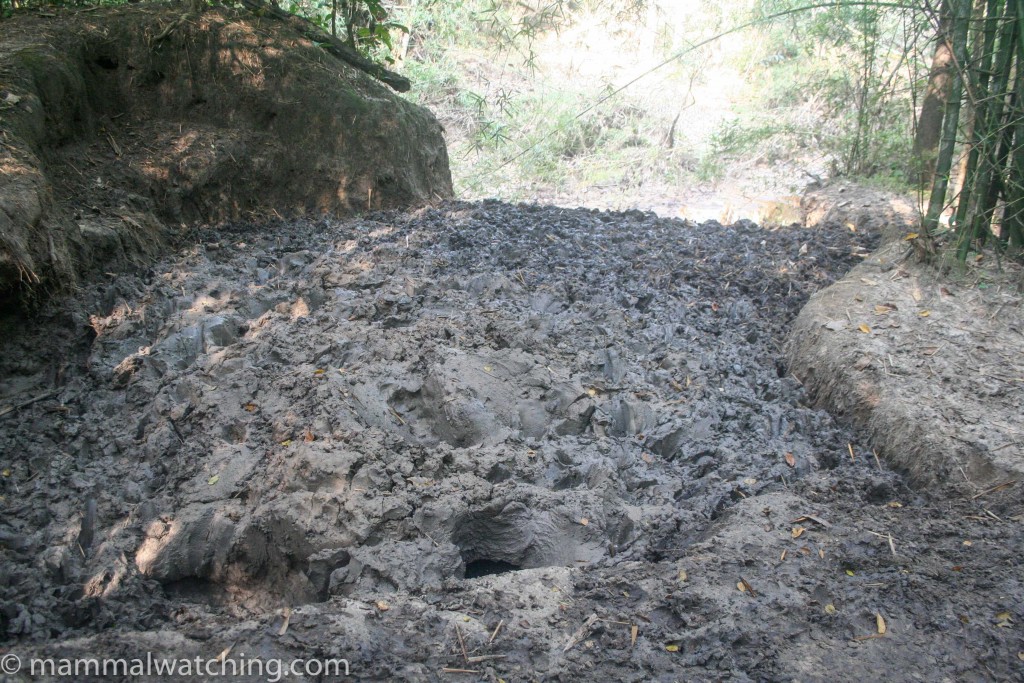 Salt Lick with a stack of tracks

But that was the only mammal for the next 8 hours. In HKK there is always a chance at a salt lick of seeing one of the park’s 170 Tigers, or Tapirs, Sun Bears or other commoner stuff. But we weren’t lucky, perhaps because the wind shifted and was blowing from our tent towards the salt lick. As we were packing up I wandered off for a few minutes to investigate a woodpecker. I got back to find an Elephant about 10 metres from where the tent had been and coming closer. Tu and Mr Hua were in a state of quiet panic: about as close as I have ever seen the karma-filled Tu come to panic. This was because: a) I had disappeared and was in danger of getting squashed; and b) more importantly, all our bags were a few metres from the Elephant and in even more danger of getting squashed. Elephants killed a ranger a year ago. 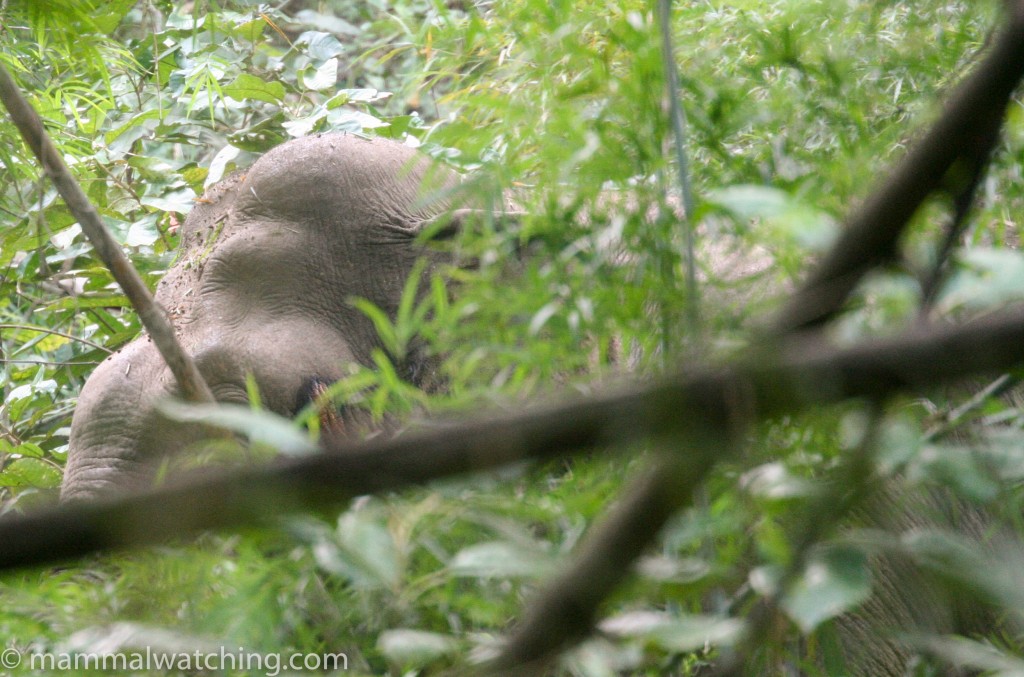 After some discussion about the risks we made a dash for our bags and cameras. The Elephant let out a trumpet and I thought we were going to get charged. But he decided to bolt in the other direction.

I saw a Grey-bellied Squirrel on the adrenalin-charged walk back.

The night drive had been a one night only favour and so we took a walk around the headquarters for our second evening. The moon was at its fullest and exceptionally bright. Indeed tonight was the night of Thailand’s Loy Kra Thong full moon festival, the biggest full moon festival of the year. It was Saturday night and the park was busy with tourists, many of whom were floating small candles down the river. Some of the rafts were made of lotus flowers. Others of bread. But not the kind of bread that floats. No, I have no idea…..

The moon was bright enough to read a book by. But despite this, a small tree near the car park was alive with small flying squirrels that appeared to be White-bellied (Temminck’s) Flying Squirrels (Petinomys stetosus). Field guides show this species as being confined to two discrete populations in the very north and south of the country but this was a species I had also seen, or so I thought, in Pang Sida NP, to the north-east of Bangkok. The tree was quite small and so we got prolonged views of some of the animals: their grey cheeks and white bellies were quite obvious. 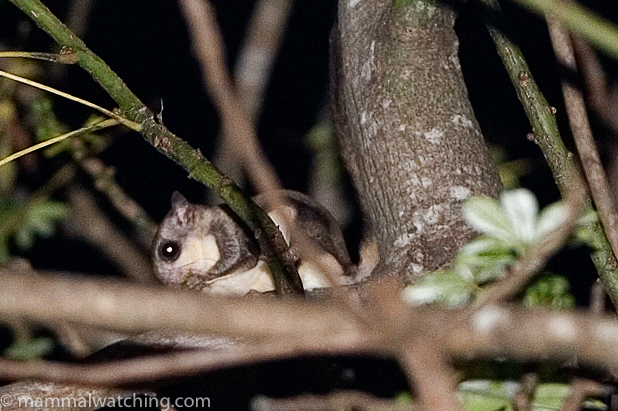 Apart from another Siamese Hare we didn’t see anything else.

The next morning we set up the tent at dawn on the river bank near camp. A Sambar Deer made a brief appearance, some White-handed Gibbons were calling and a Burmese Striped Tree Squirrel was directly above us. By 9 a.m. we gave up. I got a good look at a Northern Treeshrew on the walk back and a Northern Red Muntjac was by the river near the restaurant when we arrived for a late breakfast. Small-clawed Otters are occasionally seen from the restaurant though we were not lucky.

We decided to leave HKK and head for a quieter and less restrictive park for our final night. Mae Wong, a couple of hours north, seemed like the best bet. I’d visited there in 2004 and seen quite a lot.

Hui Kha Kaeng is a fabulous park. With time and connections it offers a better than usual chance of seeing some really nice stuff including Banteng, Tapirs, Tigers (we saw tracks near camp), Dholes and Leopards. Other species seen occasionally include Clouded Leopards, Golden Cats, Hog and Ferret Badgers and Pangolins. But unless you can pull some well connected strings to arrange to drive at night or visit the salt lick, it is, I reckon, unlikely that you are going to see a great deal.

Mae Wong and HKK are parts of the same forest complex. Mae Wong National Park is based around a mountain, and a 47 km road runs up the hill from the gates to the summit camp site. We didn’t camp at the top because the site was unusually busy so stopped instead about 30 km up, at the Khun Nam Yen campsite.

On the drive in a Red-cheeked Ground Squirrel ran in front of the car and a dusk walk along the road found a Northern Treeshrew and Grey-bellied Squirrels. It was a full moon again but there were some patchy clouds. We set off just after sunset for a long night drive down to the main gate and back. After a few kilometres some bright red eyeshine eventually revealed itself as belong to a Bengal Slow Loris (it would have been difficult to ID without Tu’s spotting scope). There was a small flying squirrel in the same tree.

A few kilometers further on we picked up a Common Palm Civet and a few kilometers further some bright eyeshine in the fork of a smallish tree turned into a white face, and then a white face with a large brown body and long tail attached. A Binturong! This has been on my top five animals to see in Thailand since I first visited. Although not uncommon they are quite hard to find unless you stake out a fruiting fig tree and get lucky. A fabulous animal.

Mae Wong is a good spot to see a range of the smaller mammals, largely because of the long road through the park along which you are allowed to spotlight (rather than because the animals are particularly numerous). During my first night here in 2004 I saw Yellow-throated Martens and Malayan Porcupines plus an enormous Bowers’ White-tailed Rat. Once again I recommend it, but pack some warm clothes. 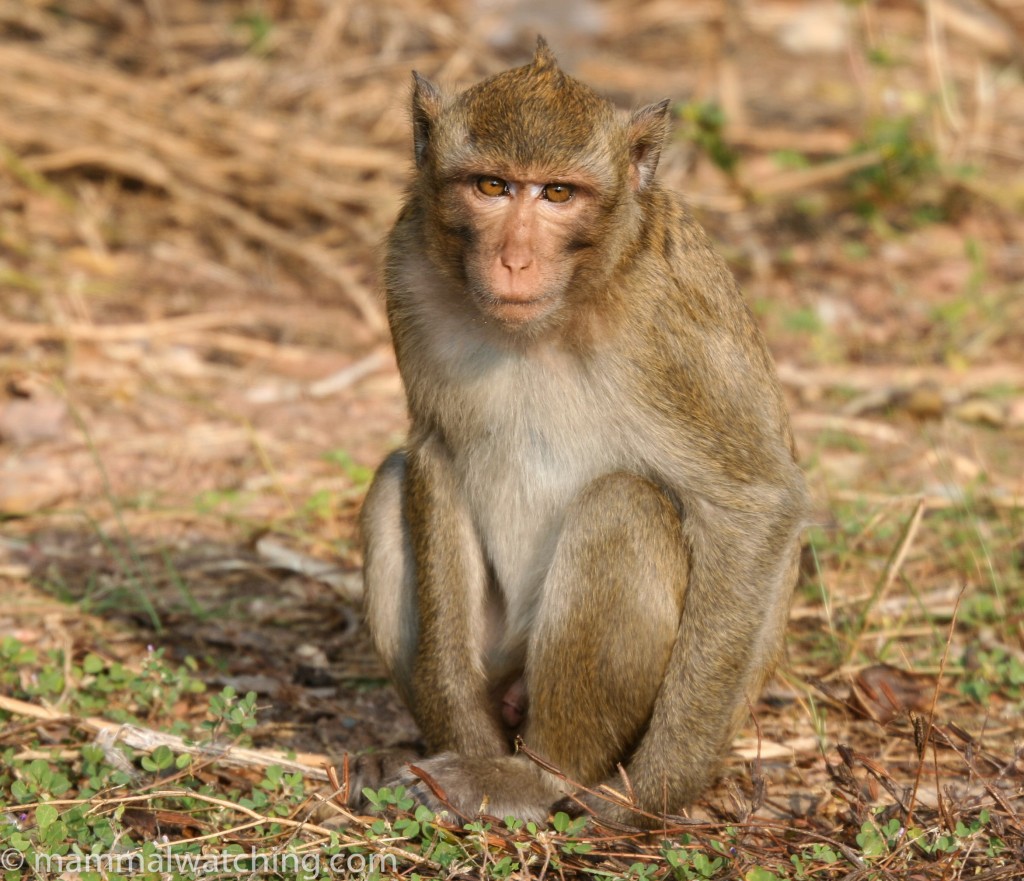 On the way back to Bangkok we stopped at the small temple at Khao No (on route 1 directly east of Mae Wong). A nearby cave has Thailand’s largest bat colony (presumably Wrinkle-lipped Bats). Access wasn’t particularly easy. So instead we visited a couple of very accessible caves right behind the temple and though they weren’t swarming with bats there were at least two species. 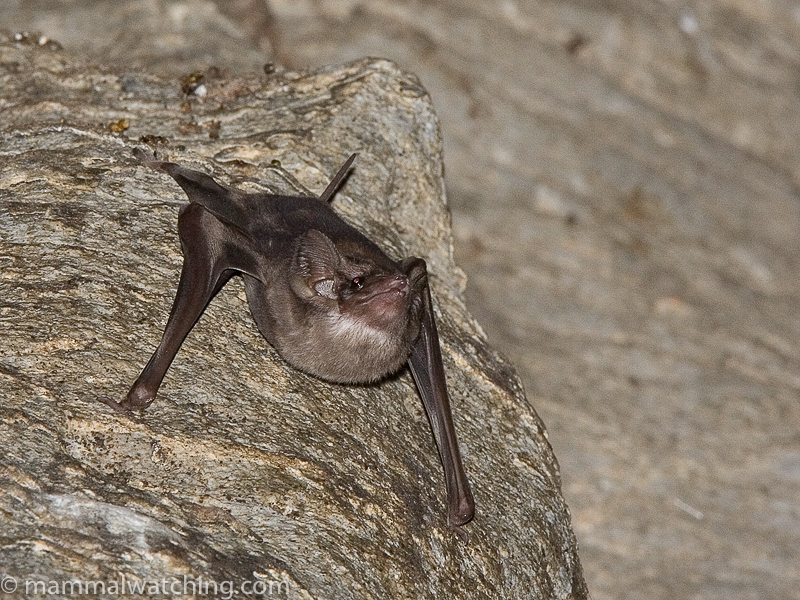 Long-winged Tomb Bats, with their naked chins, and a few tiny Horsfield’s Myotis (Myotis horsfieldii ) were in the cave. At least I think the latter were this species, given their colouration and way the wing membrane attached to the feet just above the toes (but as always I am ready to be corrected). The temple is also home to a plague of Rhesus Macaques. 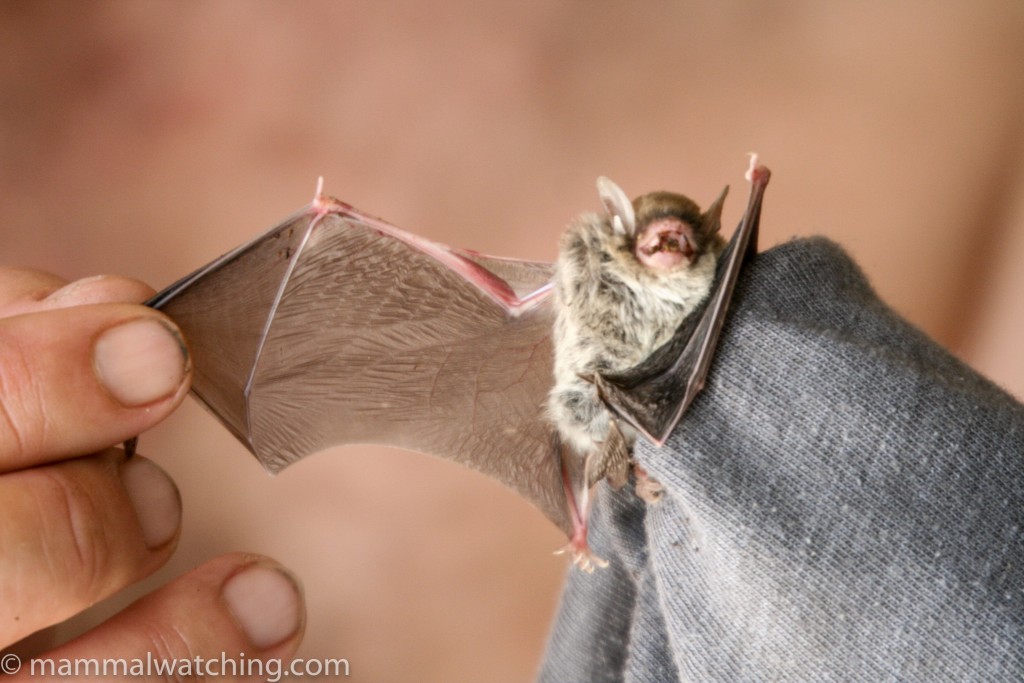 Thanks to Tu and his partner Jan for a great trip. Tu’s knowledge of the Thai fauna, and his willingness to stay up all night looking for it, are unparalleled.

This trip was spent during a particularly bright full moon and it got me thinking, because the likely success of spotlighting under a full moon has long been a moot point. I am increasingly convinced that the full moon doesn’t make a great deal of difference, at least not when you are in a vehicle which the animals see approaching. On foot it may be a different matter. But the activity of potential owl prey like the smaller flying squirrels over the two nights in HKK and then again in Mae Wong suggests that there might not be a great deal of correlation with the moon. But if you have a night when a full moon rises late, my guess is that the hours of darkness before it comes up might be better than later on. But this is mere speculation.