During a one week stay in February at the Pousada Rio Roosevelt in the state of Amazonas, Brazil, we saw a number of good primates notably Prince’s Bernhard’s Titi Monkey and Marca’s Marmoset, in addition to Peruvian Spider Monkey, Brown Woolly Monkey (common here), White-nosed Bearded Saki, as well as White-fronted and Brown Capuchins and Bare-eared Squirrel Monkey. I also had what appeared to be an Amazon Dwarf Squirrel, but this species apparently isn’t supposed to range east of the Rio Madeira? We didn’t see much else here mammal-wise in large part due to the high waters. At the end of the dry season at this location (November) I have also seen Brazilian Tapir, Red Brocket Deer, Southern Amazon Red Squirrel, Collared Peccary and a few other species. Jaguars are seen regularly (indeed in November 2008 I chose to go upstream on my final morning; the other group present went downstream and were rewarded with an adult crossing the river). Andy Whittaker has seen Short-eared Dog here. 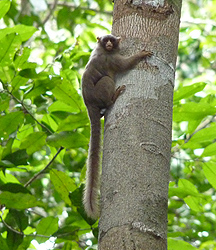 In a quick visit to Pakaas Palafitas Lodge in Guajará-Mirim in the state of Rondônia on the border with Bolivia we saw Brown Titi Monkey and more Bare-eared Squirrel Monkeys. We also saw a few Brown-throated Sloths. Both river dolphins can be seen from the lodge here, though inexplicably we missed them this time around – that said, I heard one surface in the river below while I was having an afternoon dip in the pool.

Speaking of Short-eared Dog, Duncan Ritchie and I saw this species extremely well last year (October 2009) at a distance of 25 metres when one walked out onto the path in front of us at the Pousada Rio Azul in the state of Pará, 120 km drive from Alta Floresta, Mato Grosso. This location is very reliable for White-faced Spider Monkey, White-nosed Bearded Saki and Red-handed Howler. Tapir is seen reliably in the dry season.