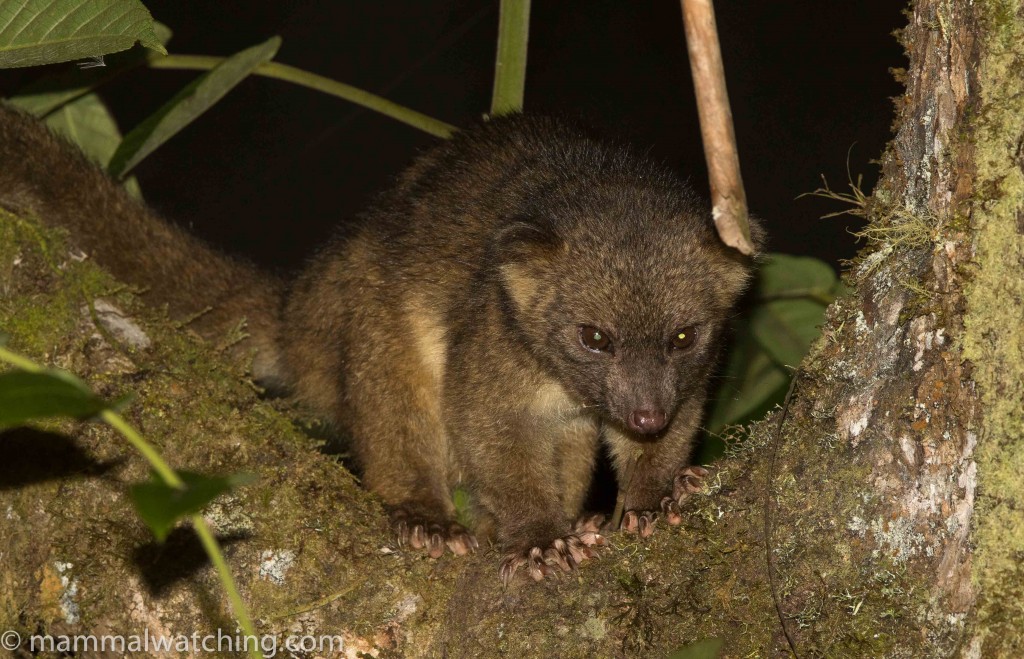 Good morning from Xining China, where a 12 hour time difference has given me the jet lag I needed to find time to finish this report before I hit the Tibetan Plateau.

I’d wanted to visit Bellavista Lodge since hearing it was THE place to see the recently described Olinguito, and visited for three nights over the Labour Day weekend in early September 2015.

Bellavista, which is up at 2200 metres, is only 2.5 hours west of Quito and the very helpful lodge office in Quito can arrange pick up and drop off there depending on what time of the day you want to travel. 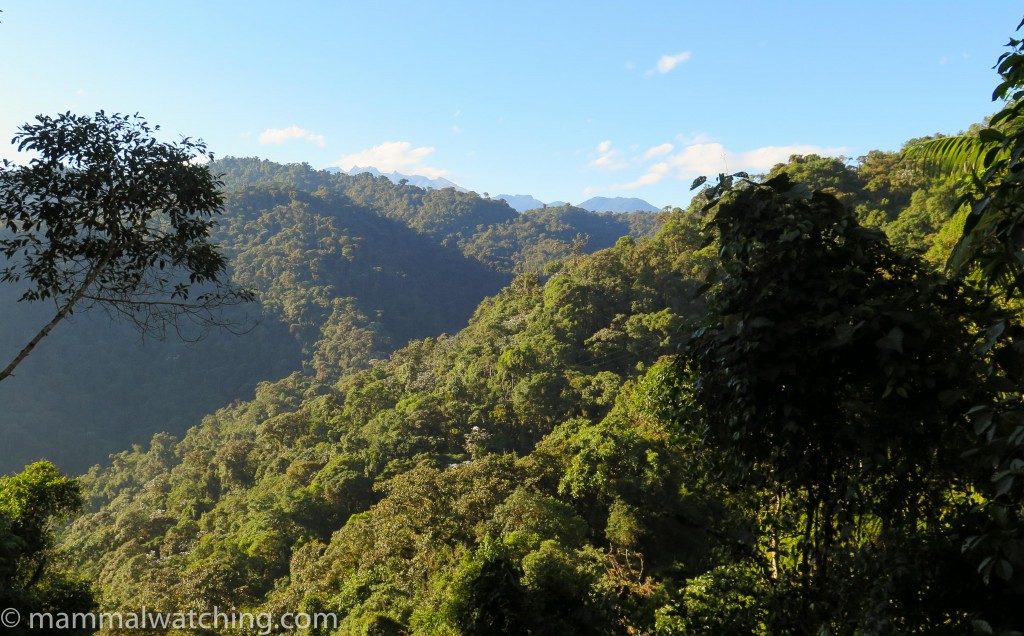 The lodge is comfortable, though the rooms are pretty close together, and as a result sometimes less tranquil, than some ecolodges I’ve stayed at. The food was tasty, and the staff could all have won an “Ecuador’s friendliest people” competition. A network of trails around the lodge offer options for hiking. Although guides, all of whom spoke English, were available, most of them were leading groups of people and we preferred to walk on our own. 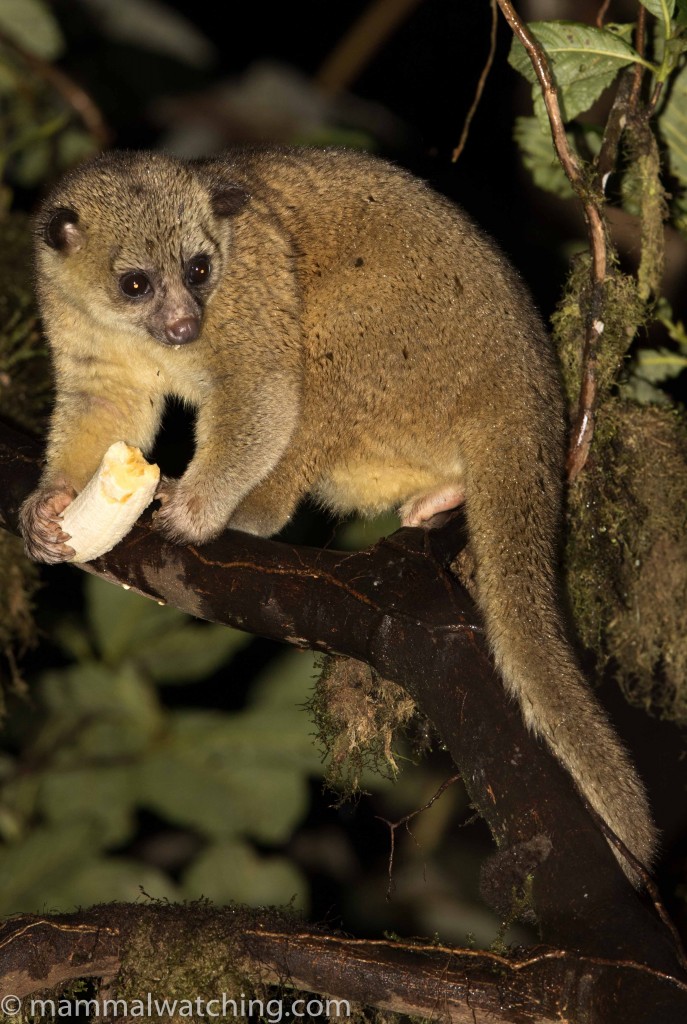 September is the end of the dry season (which runs July through October). The mornings were clear, with clouds building up during the late morning every day, and a few drops of rain during the first two afternoons, and heavier rain during the last afternoon and evening. It didn’t get much above 70 F during the day, and was in the low 50s at night. 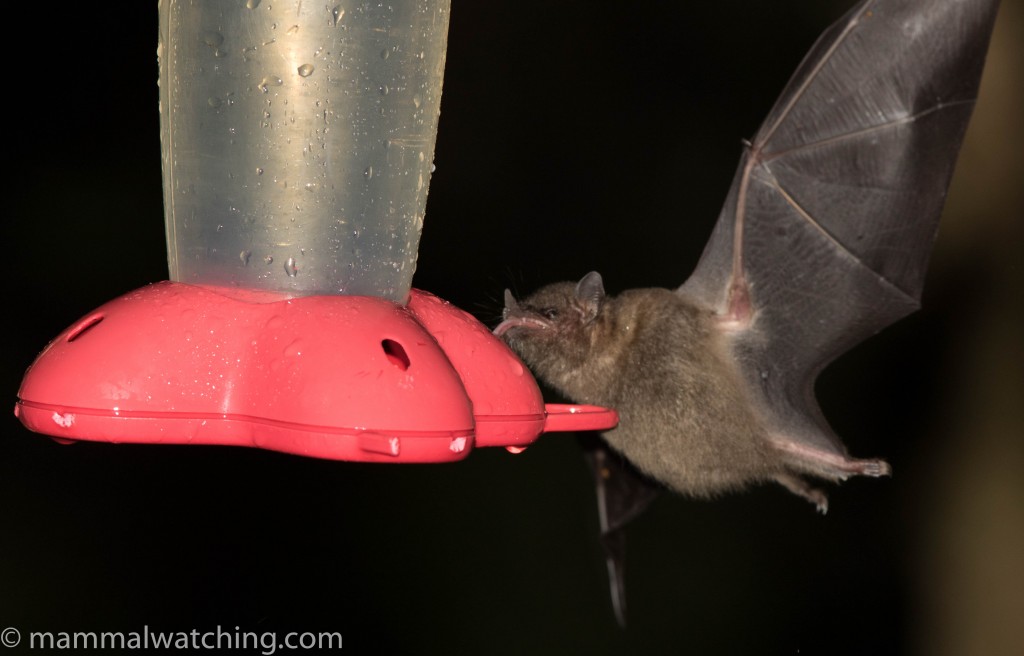 The birding seems pretty good, with swarms of hummingbirds around feeders at the lodge during the day. The kitchen also hang bunches of bananas from trees, primarily for the Olinguitos to feed on at night. 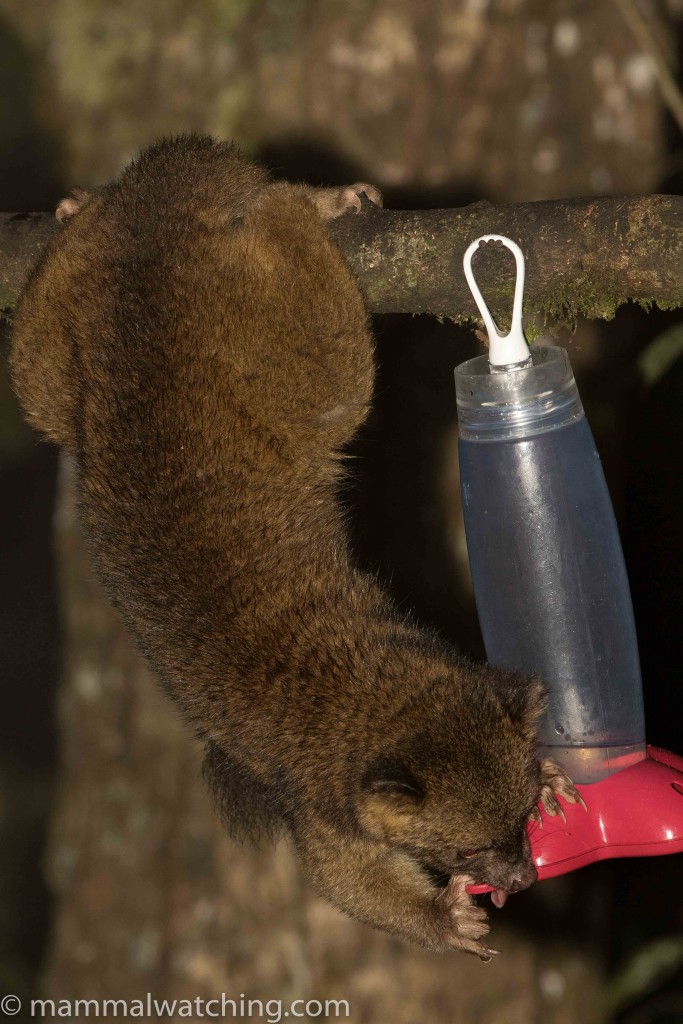 Mammal activity changes, of course, but while we were there, Olinguitos and Kinkajous were visiting the bananas every night from about 7pm and were very easy to spot. Though the faces of the the two species are quite different if you are in any doubt then look at the tails. 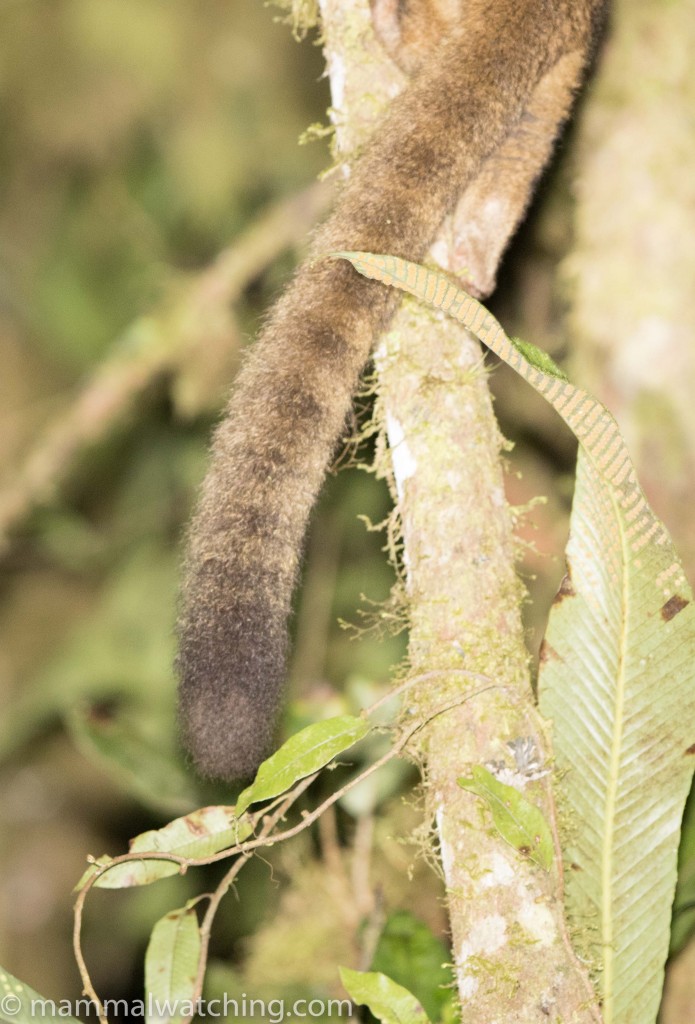 Kinkajous will nearly always wrap the end of their tail around a tree branch when stationary, whereas Olinguitos’ tails – which are much bushier at the tip than the tapering tail of a Kinkajou – are not at all prehensile. 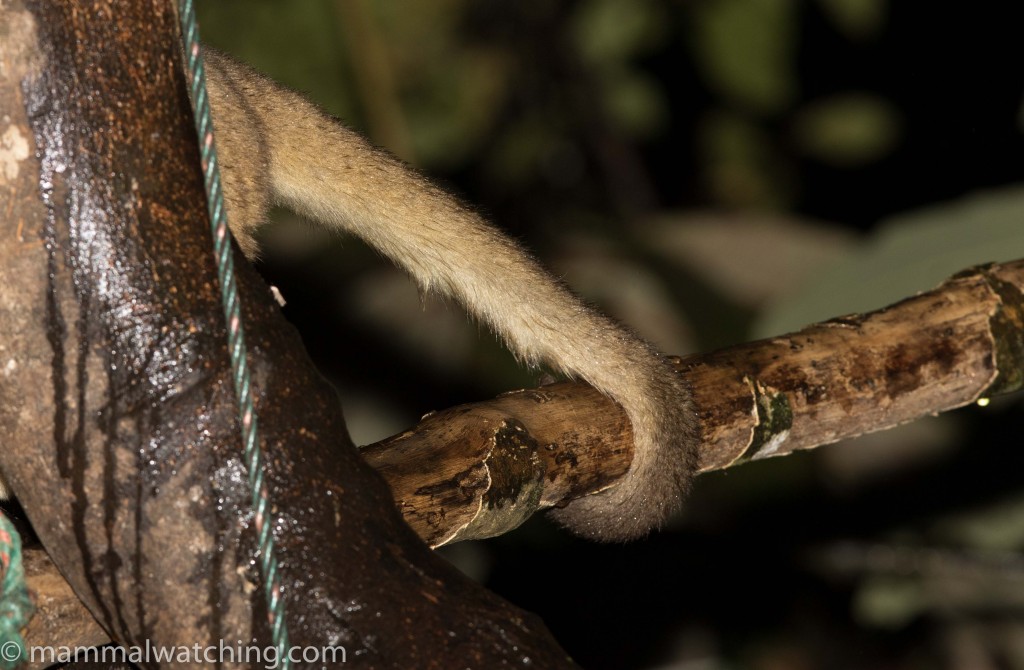 The two animals have quite different faces too, with the Kinkajou considerably heavier than Olingos and Olinguitos. 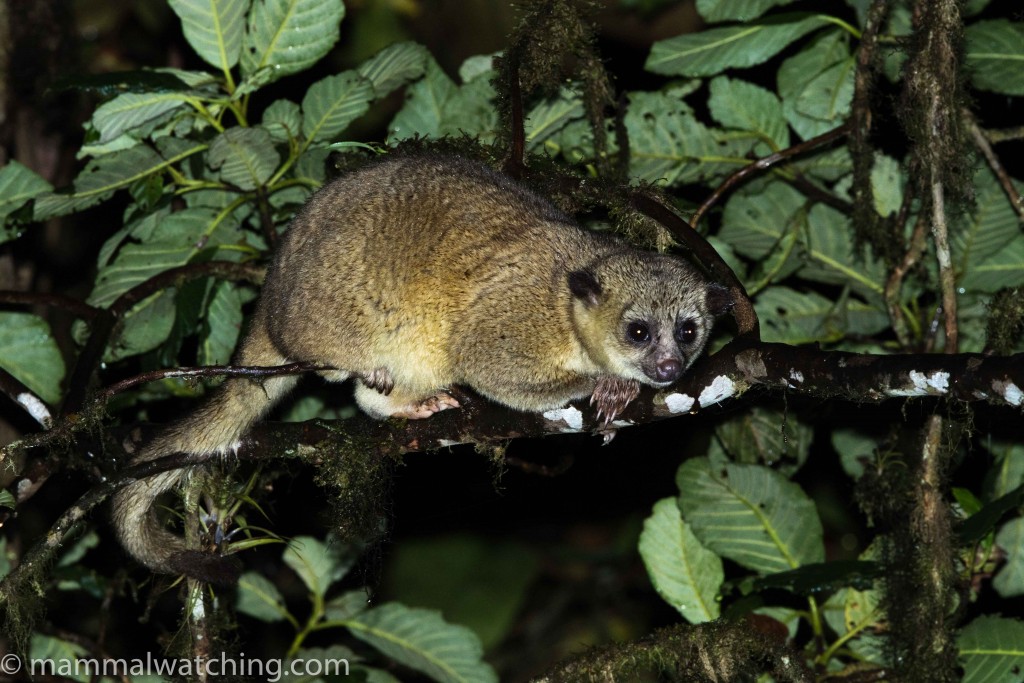 Comparing the larger, blonder Kinkajou with the slimmer, browner Olinguito is not always so easy in the field. 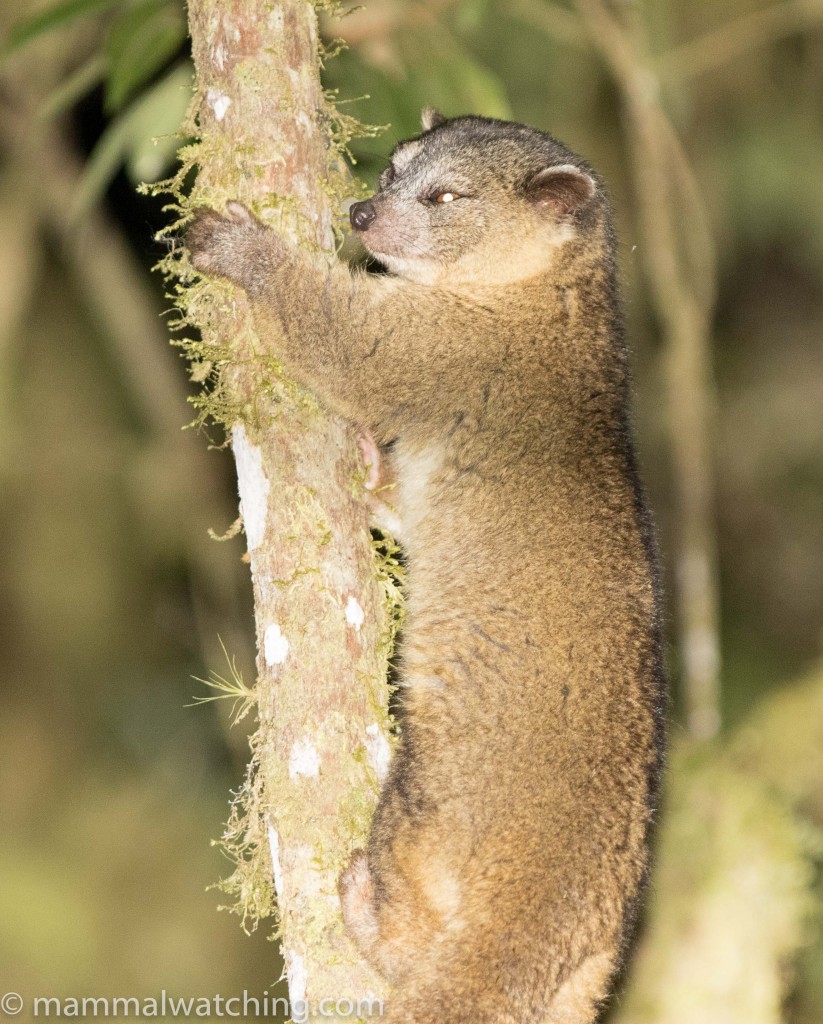 Andean White-eared Opossums, another recent split, were also easy to find. They seem to have a rather uneasy relationship with the Olinguitos and Kinkajous, though it was difficult to know who was more uneasy of whom. But, although one of the guides told me that the opossums had been quite difficult to see over the past few weeks, I saw several each evening. Great looking things. And if you cannot see one on the bananas or the hummingbird feeders then try the area around the compost bins. 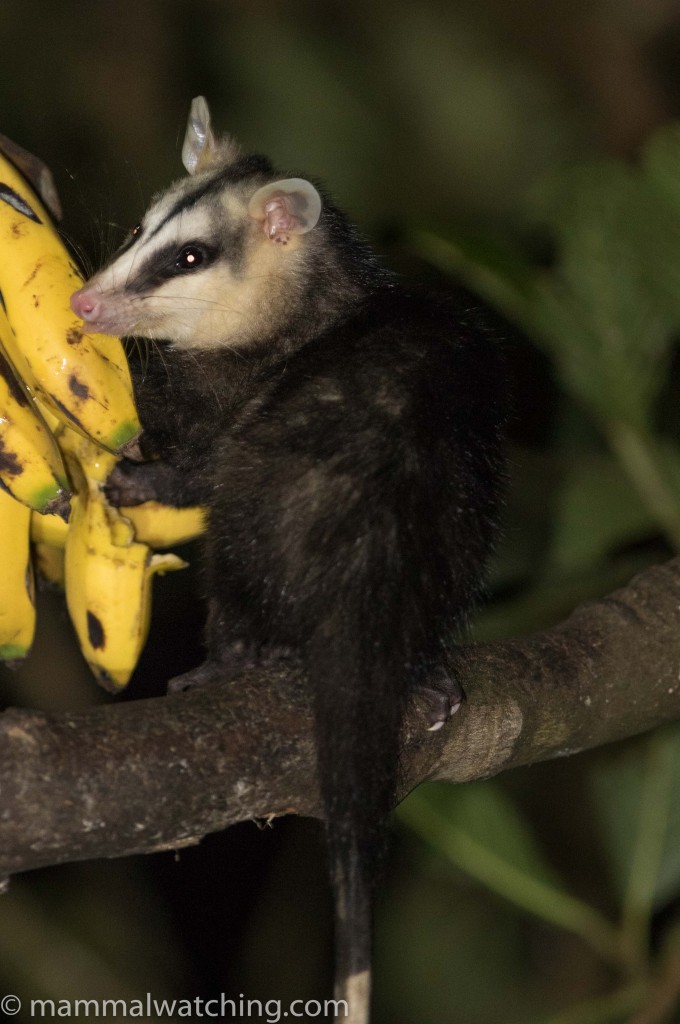 Bats also visit the hummingbird feeders, but not until about two hours after sunset, which was surprisingly late. I took a bunch of photos and they all appeared to be one of the anoura (tailless species), apparently Anoura fistula, according to Nelson one of the more experienced guides there. This was something that the scientist who first described the species had told him during a visit to the lodge so I was pretty confident in the ID and Fiona Reid also confirmed all my photos appeared to be of that species. Interestingly my third lifer of the trip: and all three of which had been described in the past 10 years. 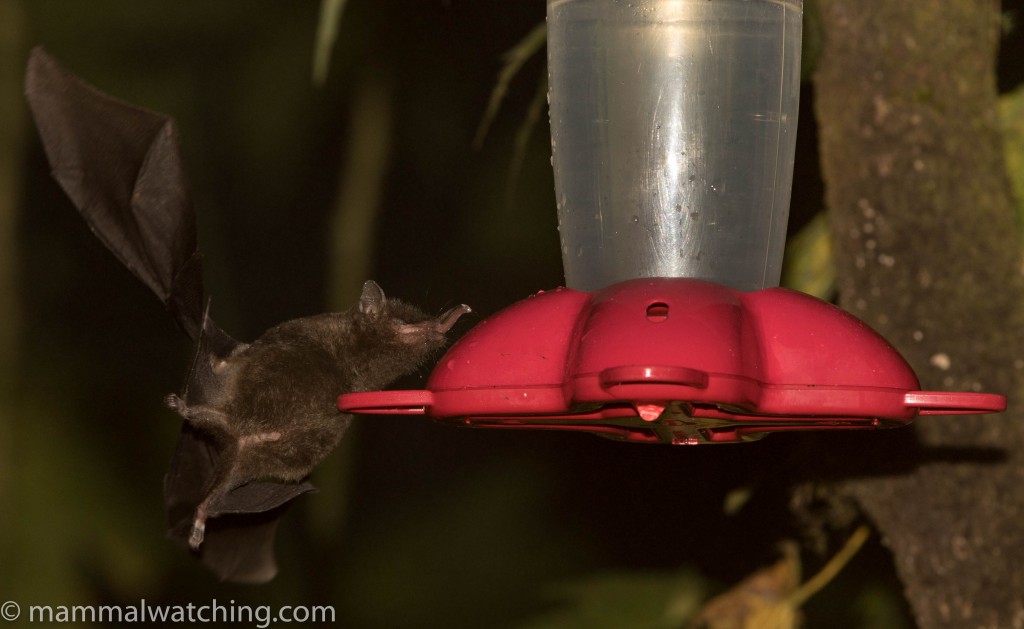 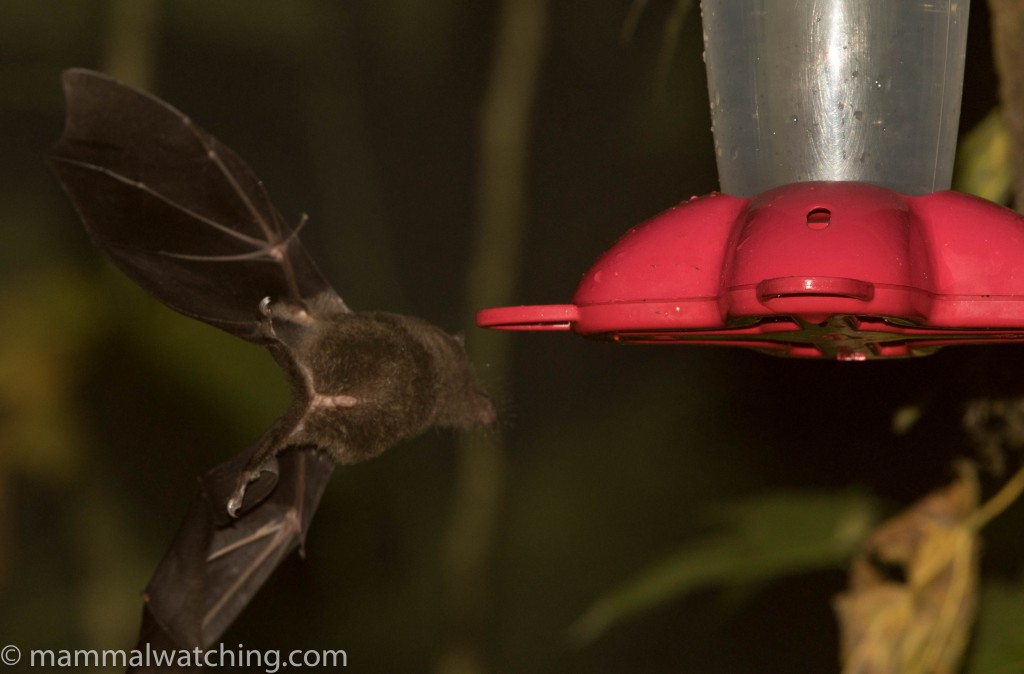 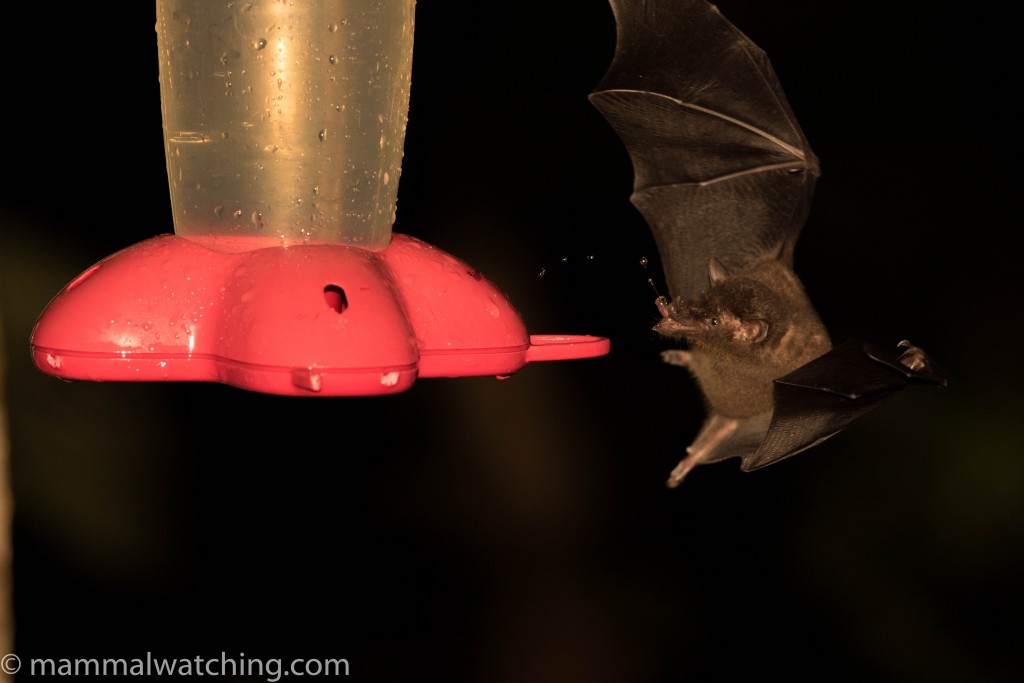 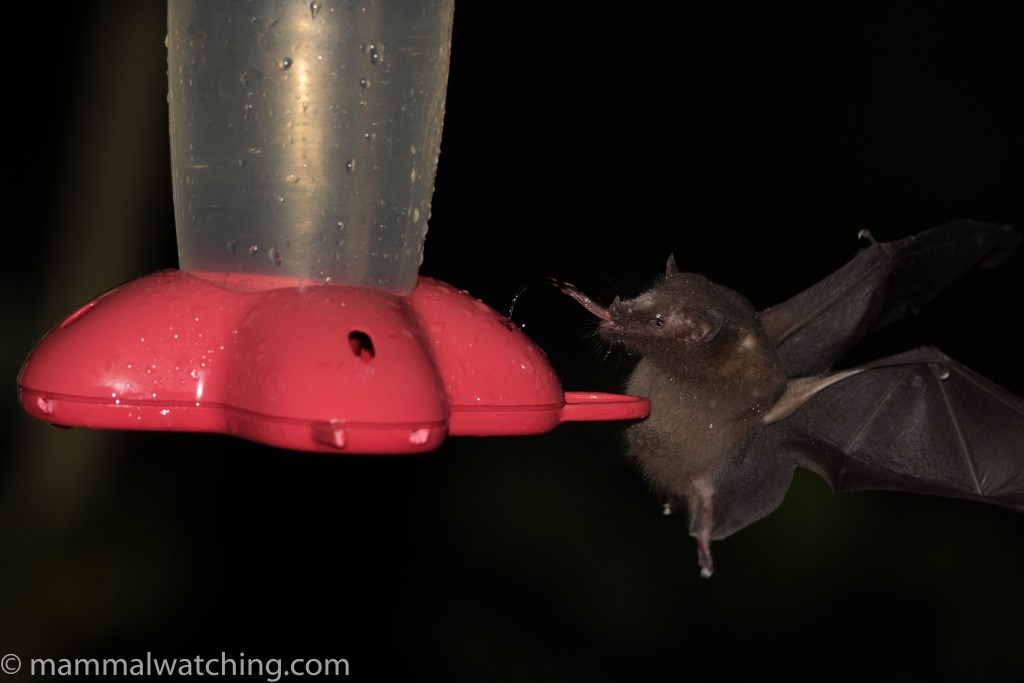 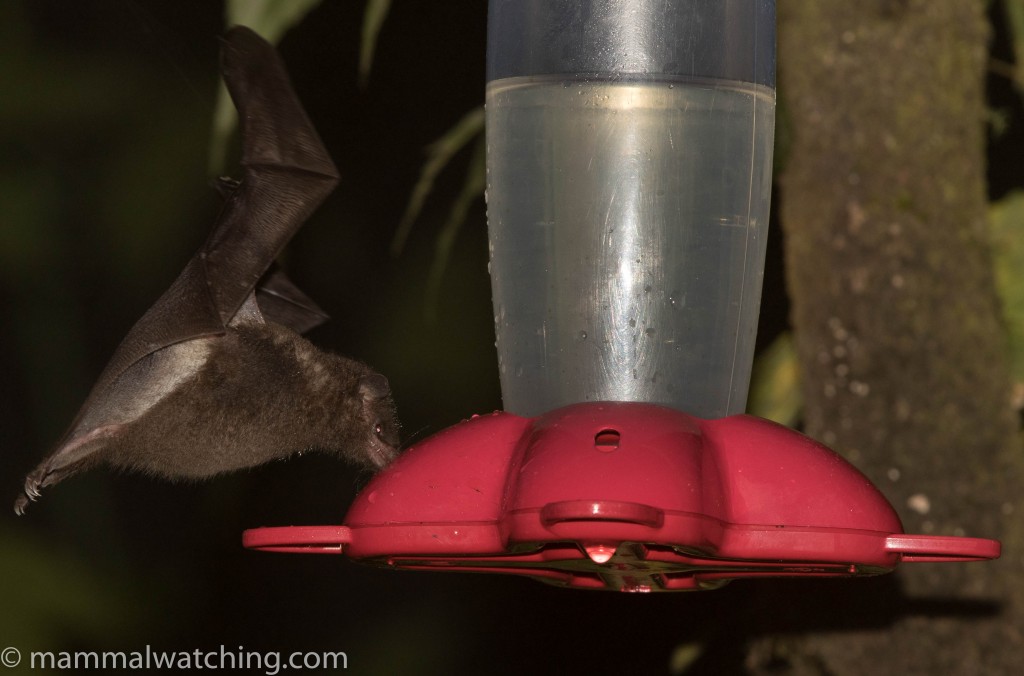 I spent the days hoping to see a Tayra: at least one Tayra had been visiting every day to feed on bananas, particularly in the early morning, until about a week before I arrived, but hadn’t been seen since. The consensus among the guides was the lack of rain meant they weren’t moving around so much. I am not sure about that, given Tayras’ tolerance for dry habitat. But the animals didn’t show and this species is now my official bogey beast.

Indeed the only mammals I saw during the day were the Red-tailed Squirrels, very common around the lodge. 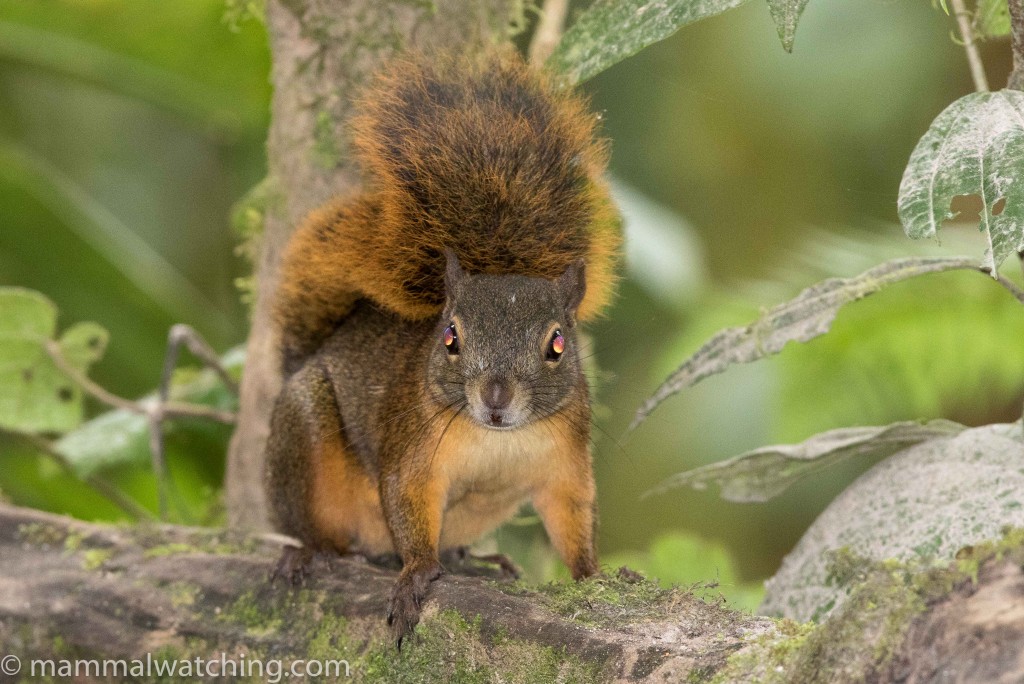 I got permission to set 25 Sherman traps around the property. I caught nothing in the bamboo forest for the first two nights, but on the last night moved the traps and caught two animals. The first, in the compost bins, is one of the Oryzomys Rice Rats and after further investigation seems most like to be a Grey-bellied Nephelomys (Nephelomys moerex), a recently split species whose type locality is down the road in Mindo. There doesn’t seem to be much else of this size in the area. 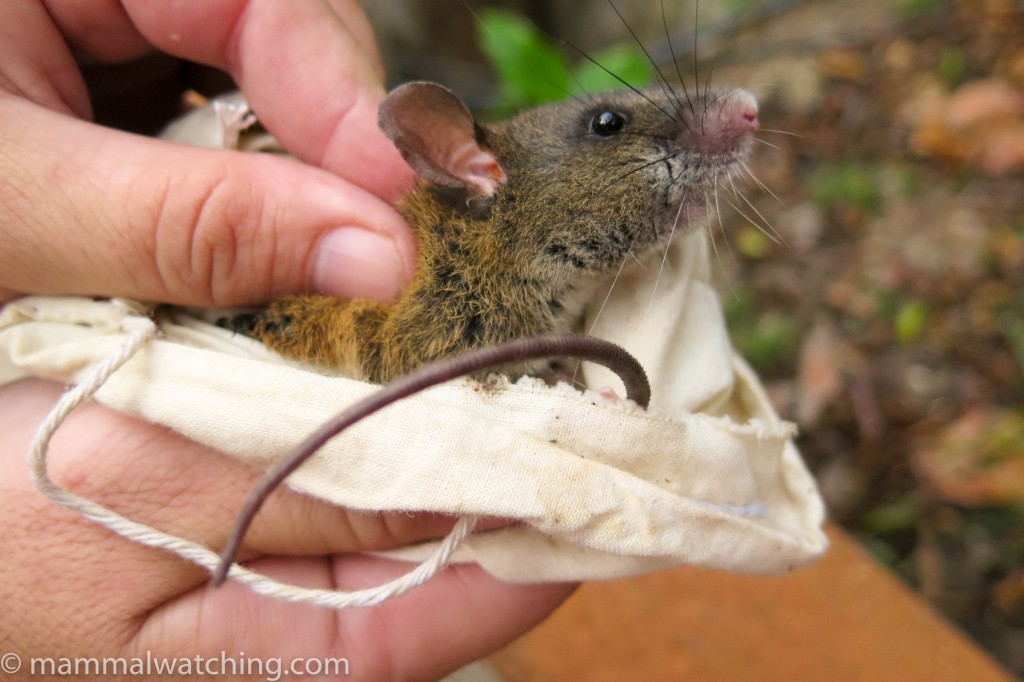 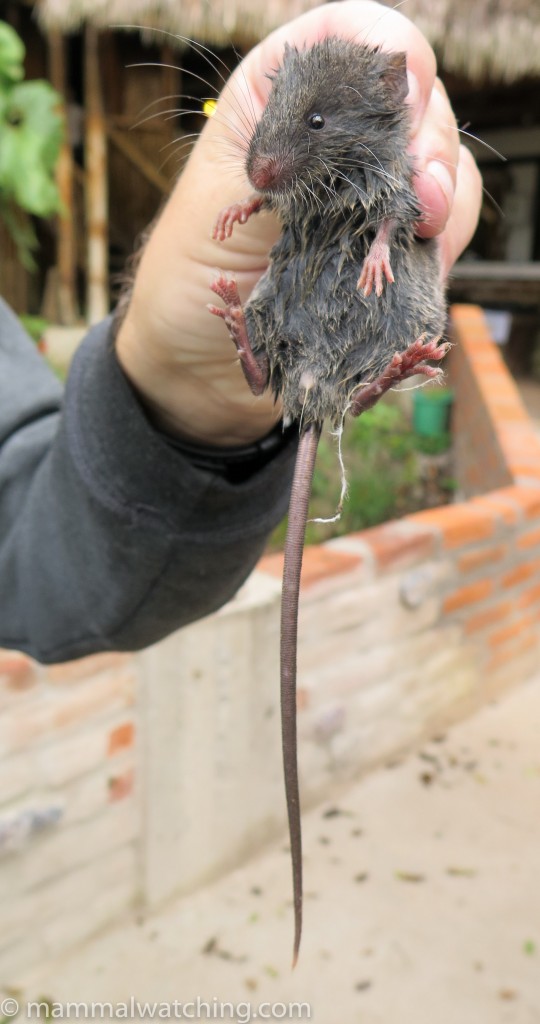 I caught another animal in the woodpile just outside the lodge gates. Dark and long-tailed it wass one of the Thomasomys genus, but I am not optimistic that I will ever get this species ID’d to below genus level.

There are a range of other species at Bellavista. Long-tailed Weasels are not uncommon and Mountain Coatis are seen occasionally, usually near the bananas. Though the lodge doesn’t often organise spotlighting trips it might be possible: Nelson had seen what he was sure was an Ocelot two weeks earlier while looking for owls. Oncillas are frequently recorded on the camera traps, as are Spectacled Bears which are becoming more frequent it seems: the cook had seen one near the lodge at 5 a.m. a week or two before my visit. 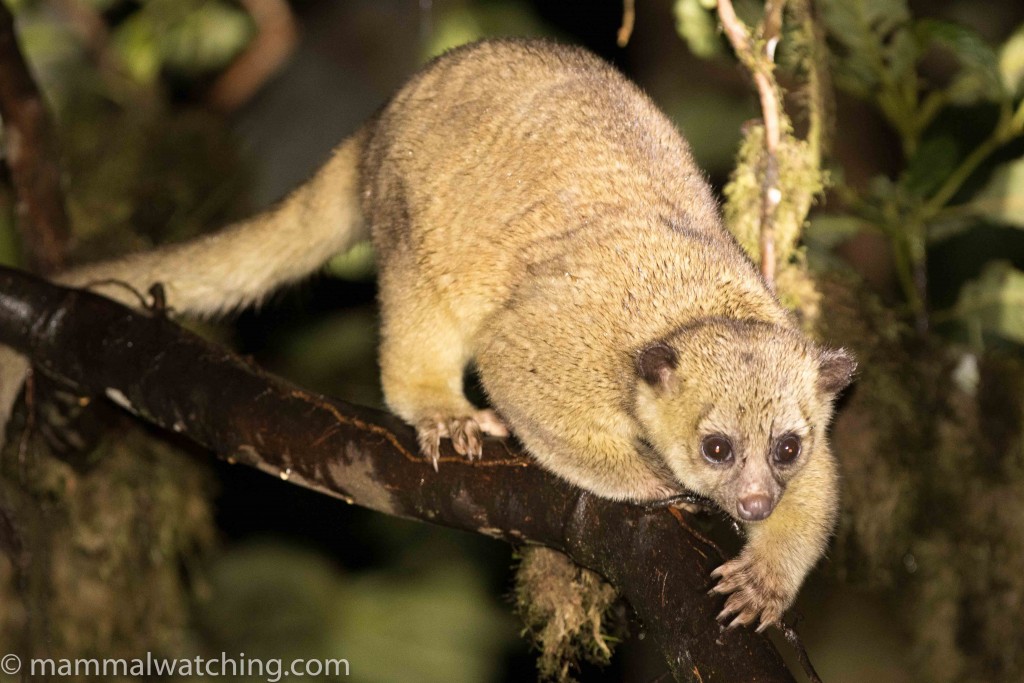 Bellavista’s convenience to Quito, and the Olinguito in particular, makes it the perfect spot to spend a couple of nights at the end of a trip around this wonderful country. Just don’t tell me if you see a Tayra. 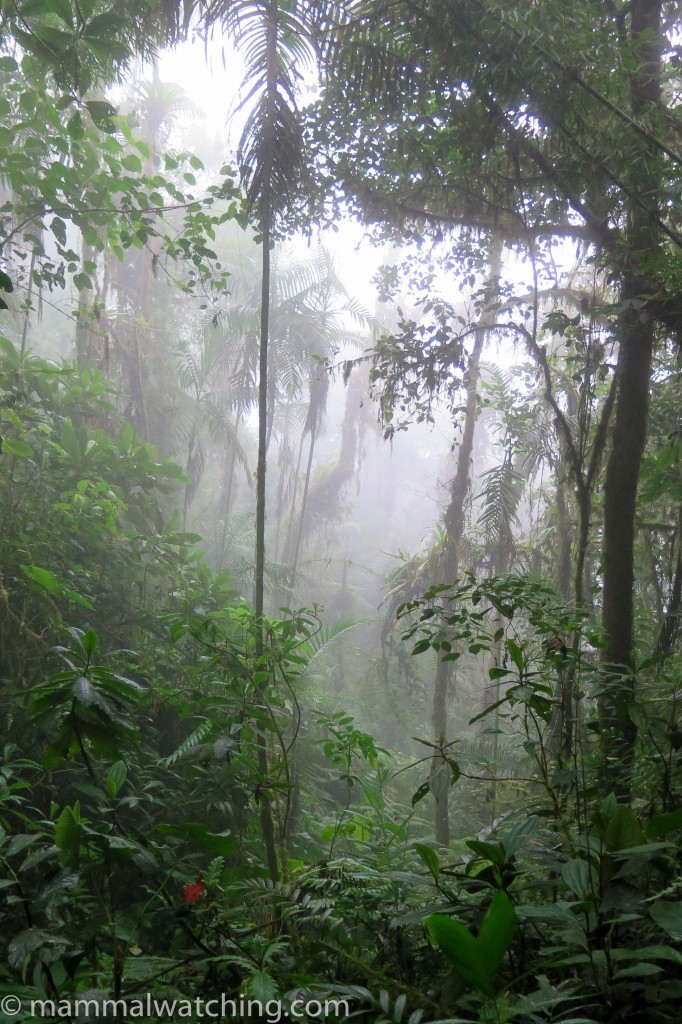