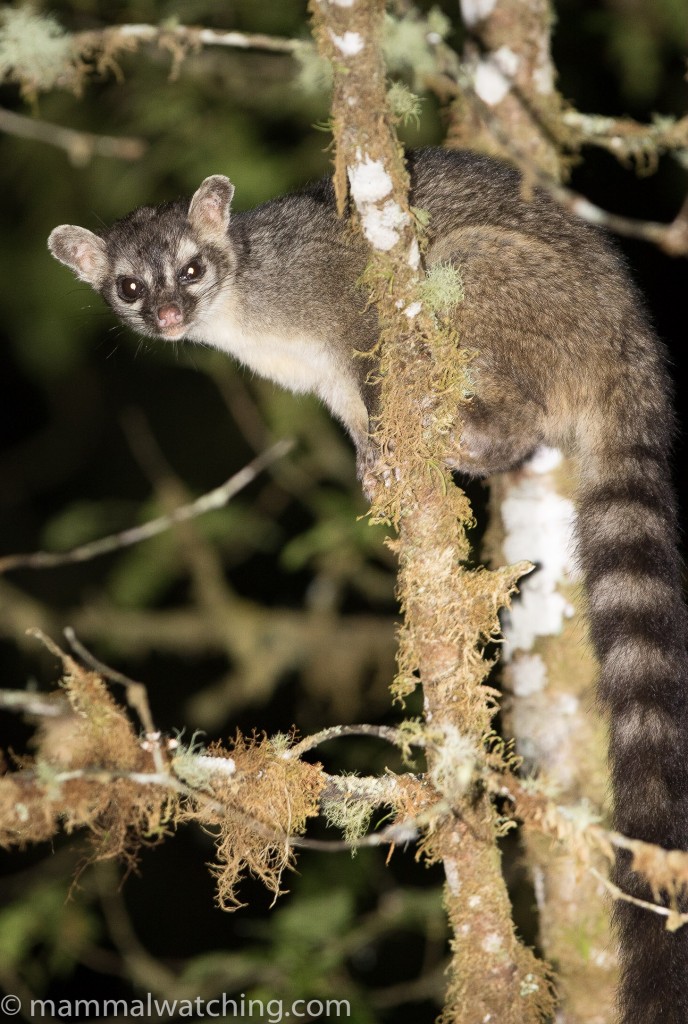 In early 2016 I was wondering where to take my kids for a long weekend from New York during their Easter vacation. And then Cheryl Antonucci started posting pictures of Cacomistles all over facebook. Panama: great idea!

This wasn’t a super intense mammal trip and I won’t write a long report, but will add a few details to supplement Cheryl’s report. I followed very much in her footsteps and took my kids to three of the same locations she had visited: Colon, for Panamanian Night Monkeys; Coiba Island, for the endemic Agouti and Howler Monkey subsecies; and Los Quetzales lodge for Cacomistles and more. 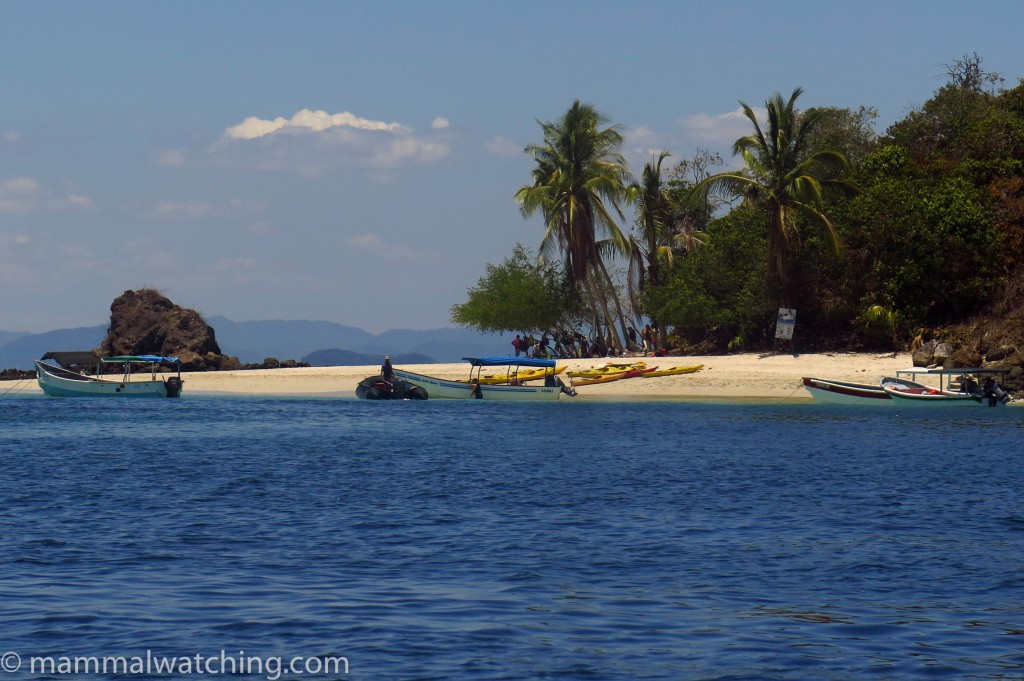 Organizing the trip was pretty straightforward. I booked everything over the internet and hired an SUV from Hertz at the airport. The first thing to note is that car hire prices on Expedia do not bear much resemblance to the actual cost in Panama which includes expensive, government-mandated, compulsory insurance, even if you have purchased Expedia insurance or get it through your credit card. So don’t pre-pay for insurance until you arrive, and expect the actual bill to be about twice what Expedia tell you (though it was still not unreasonable). 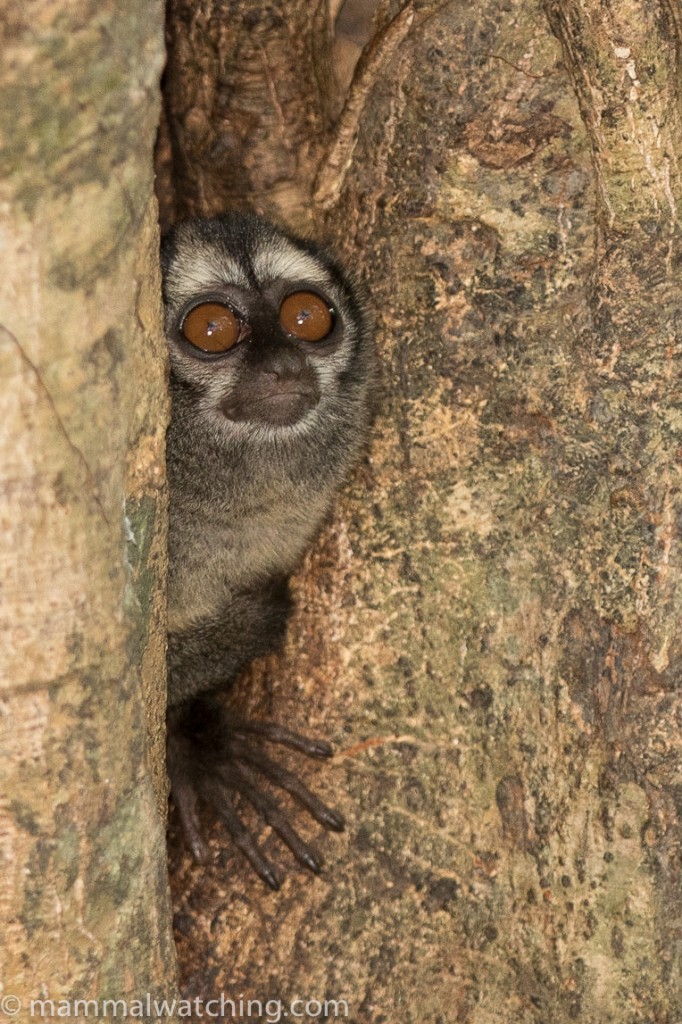 Our first stop was a night at the Melia Hotel in Colon. It should take an hour and a half from the airport but Google maps insisted we take a road that didn’t exist. This wasted a bunch of time: there is no turn off towards the hotel from the Panama-Colon freeway, whatever Google tells you. You need to get off of the freeway first and take back roads to get to the hotel. 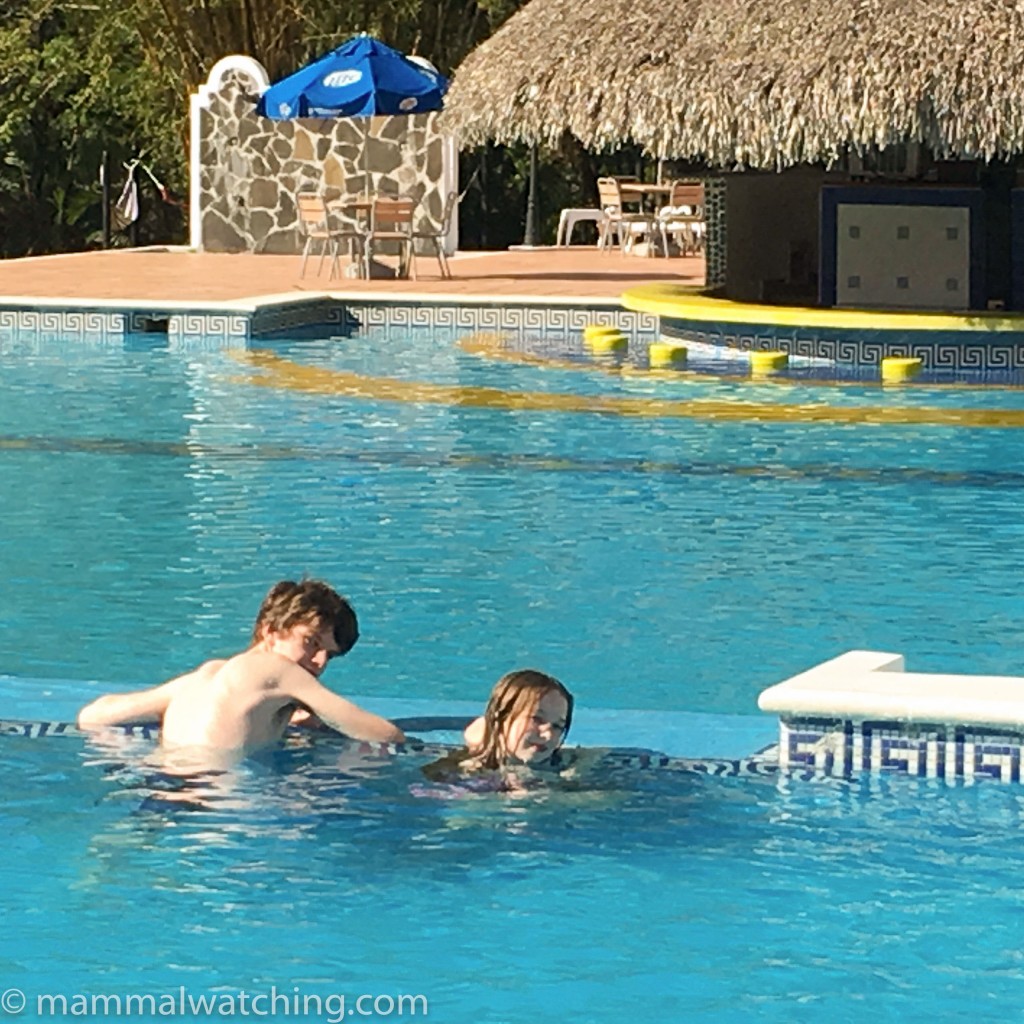 The entire journey from guard gate to blue tank is about 30 seconds, and the tank is in the corner of a small parking area next to the back of the hotel. Post-monkey watching we relaxed and enjoyed the very nice hotel pool for the rest of the morning. 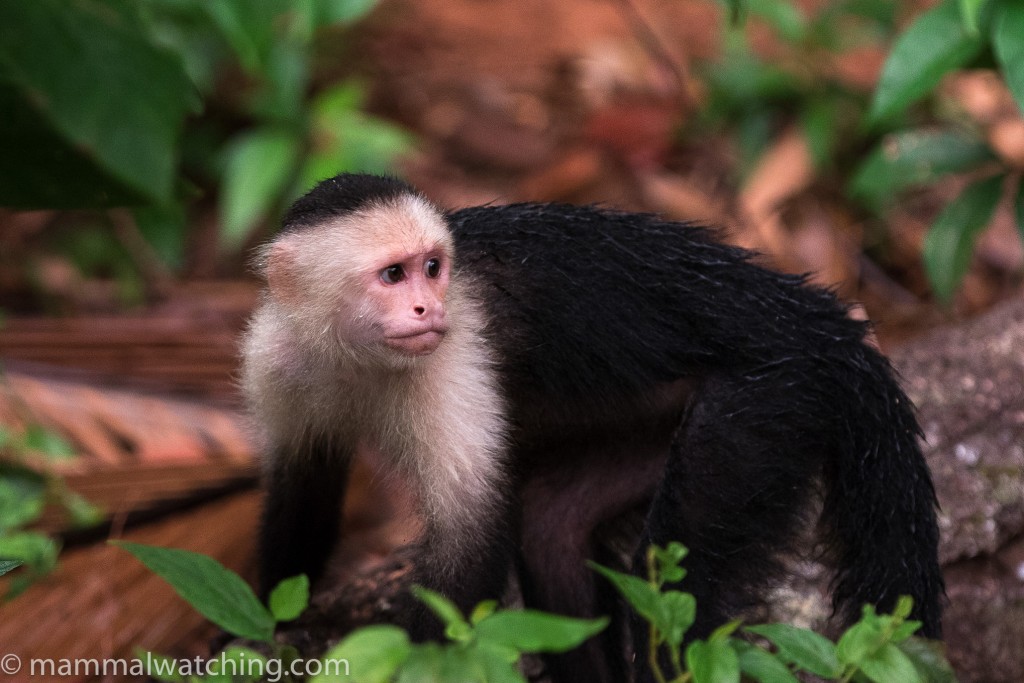 It took about five hours to drive across Panama to the very hospitable Hotel Heliconia right in front of Coiba Island. The guest house has some resident Proboscis Bats, and occasionally sees armadillos, tamanduas and other stuff – including Honduran White Bats – in the garden. 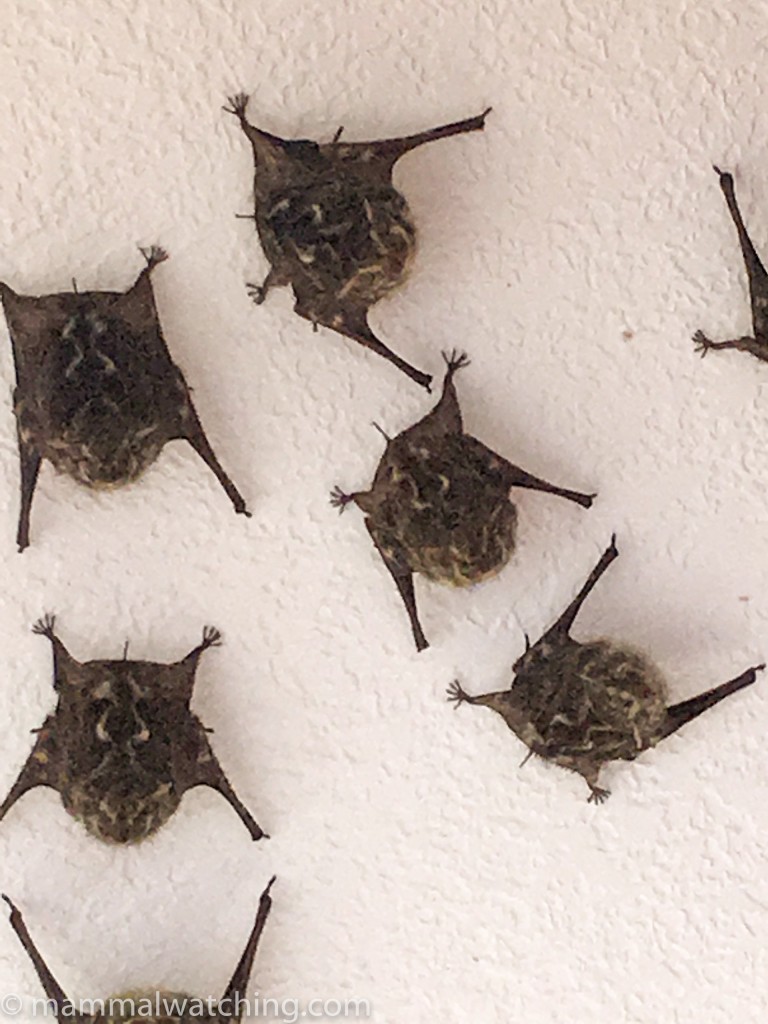 Loes and Kees, a Dutch couple, own both the hotel and Tanager Tourism, and specialize in organizing trips to Coiba. It is a fairly expensive trip, primarily because you need to hire a boat and driver for the three hour crossing to the island and you also need the boat to get around while you are there.

It is possible in theory to hitch a ride and camp on the beach (as I heard a couple of Americans saying they had done), but it is not straightforward. Apparently you need proof you have organised a trip back to the mainland or you may not be allowed to land. Moreover, from time to time people get stranded on the island and run out of food when their return trip fails to materialise. Day trips from Santa Catalina are possible too, though that would greatly reduce your chances of seeing the howlers. So we went with Kees. He guided – and cooked for – us on the island for our 24 hour stay and arranged everything perfectly. I doubt whether we would have seen the Howler’s without him. He’s also a very nice guy. 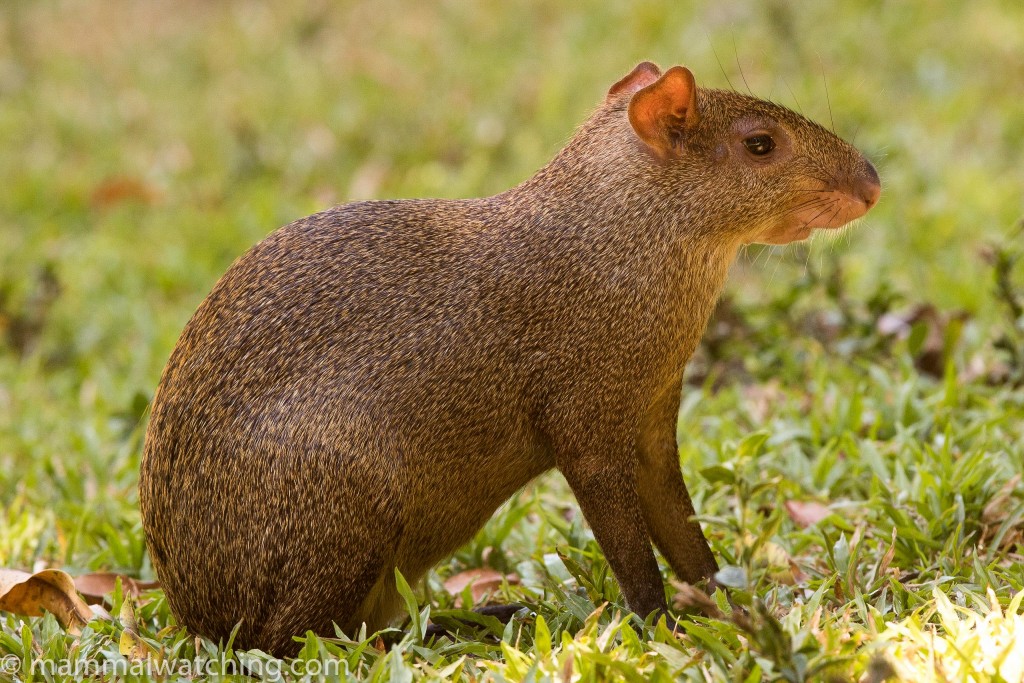 As Cheryl said, Coiba Agoutis are easy to see by the accommodation.

Kees knows the best stakeouts for the Coiba Howlers and we saw some along a trail that was a 10 minute boat ride from the accommodation area, after missing them on the trail to the hot springs. I heard them behind our room the next morning. 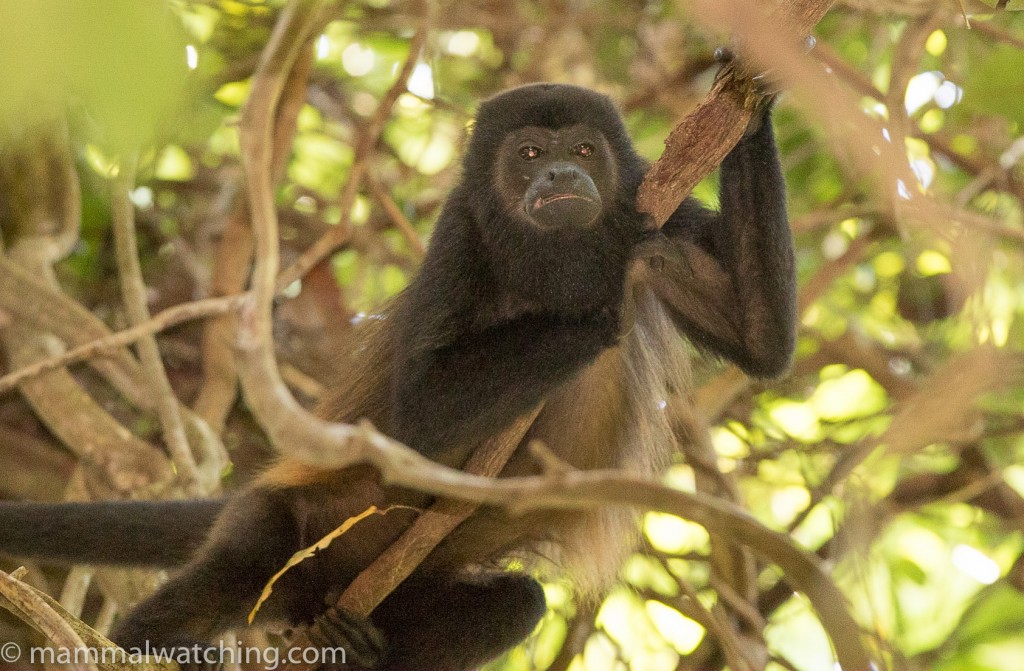 Opinion remains divided on whether the Coiba Howler is a full species or a subspecies of Alouatta palliata. For the moment I will follow the IUCN and not count it as a full species for my life list. In any case, Coiba is well worth a visit for the snorkeling alone: on one snorkel we saw four very large turtles and an impressively big White-tipped Reef Shark. 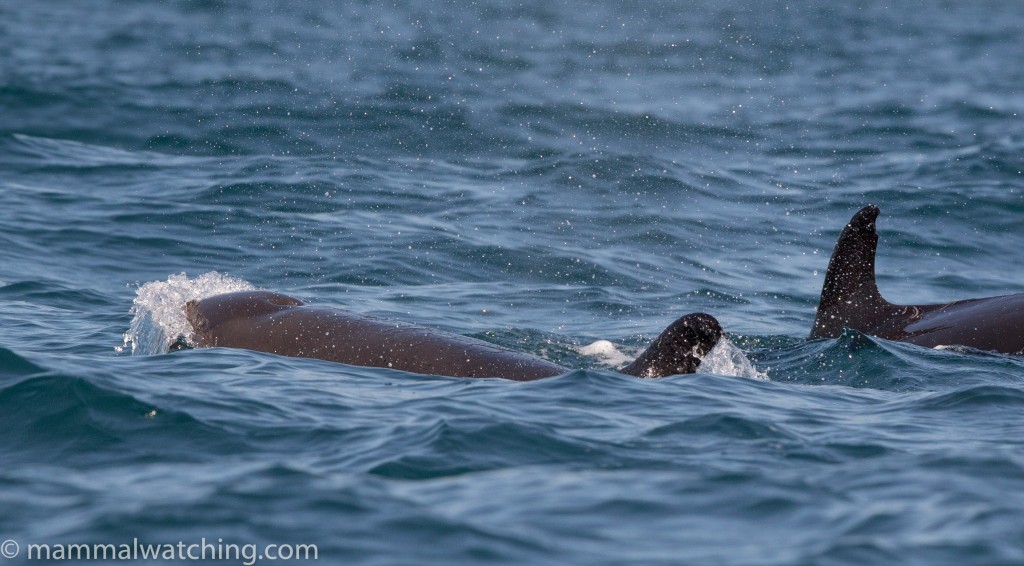 The area is also good for cetaceans. We had a stunning encounter with a pod of False Killer Whales close to the island as we arrived. A pod of 20 or so played around the boat for half an hour, repeatedly swimming just under our small boat, spy hopping and breaching around us. 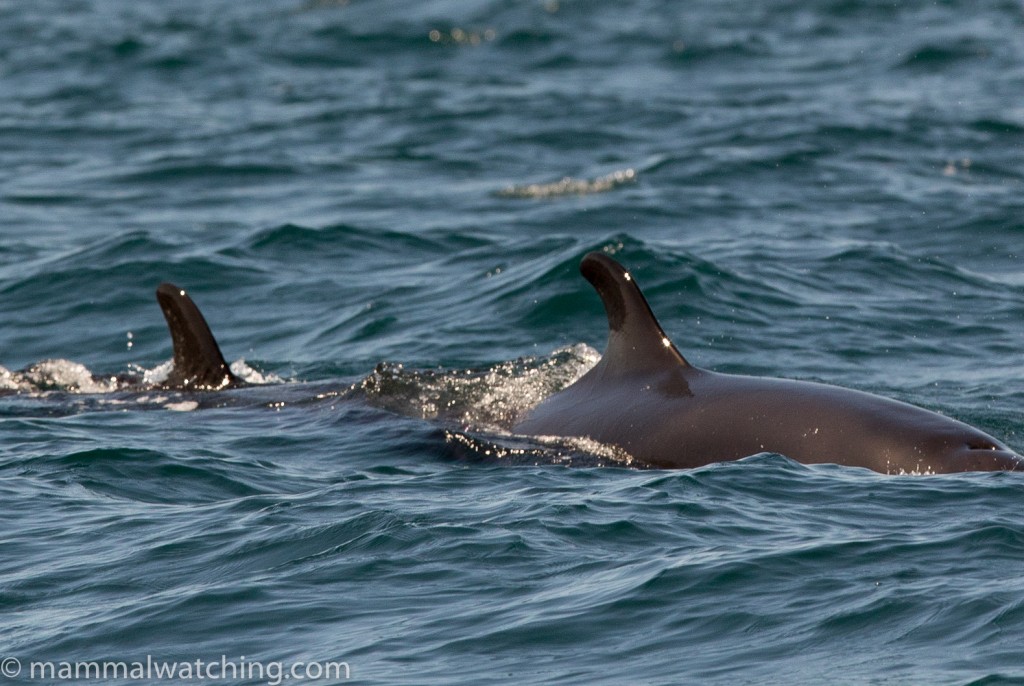 It is a species I have only seen twice before and both times they had been moving fast in the open ocean, so this was a really special sighting – one of my very best cetacean encounters ever. Kees has only seen False Killers twice before in five years arund the island so we were lucky. Here is some video to give a sense of the encounter.

The only other mammals we saw on the island were some White-throated Capuchins, both in the forest and by the accommodation.

On the way home we had a brief look at a few Bottle-nosed Dolphins which – I think – were travelling with a Pantropical Spotted Dolphin or two. There are other cetaceans in the area, including Humpback Whales during August and September which come to the waters to calve: the whale watching must be fabulous then. 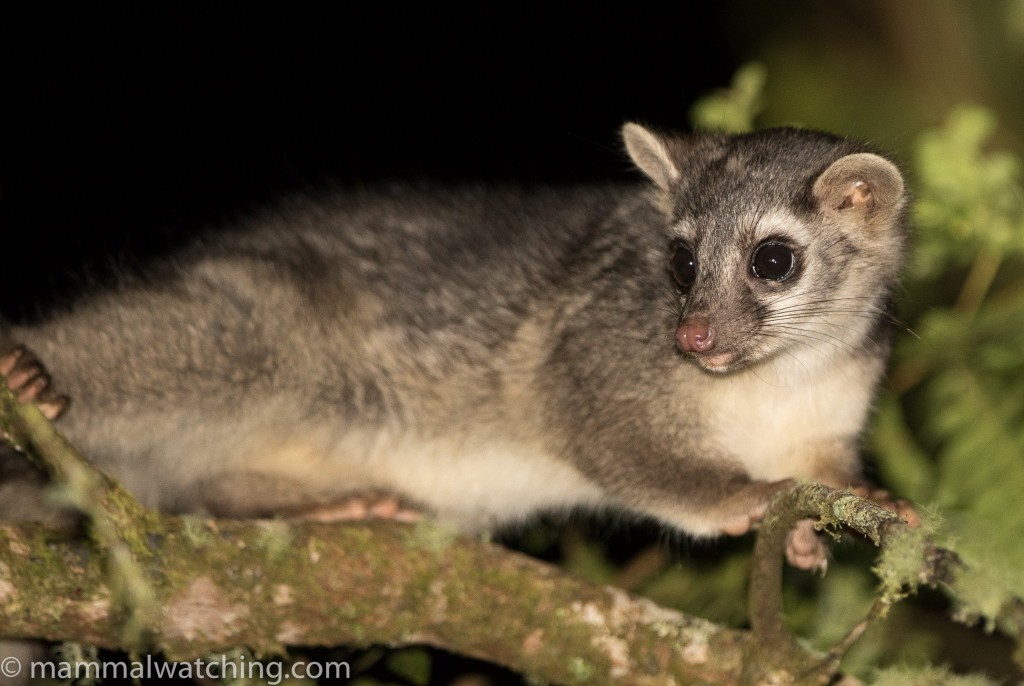 Our last stop was the fabulous Los Quetzales lodge. As Cheryl said you really should stay in Cabin 8 (or Cabin 9 at a pinch). These two cabins are the furthest from the main lodge, which means a 30 minute walk, or 30 minute 4WD trip, up a very steep and very rough track from the main lodge. These far cabins are in a gorgeous bit of cloud forest.

You have the area to yourselves when you get there and can arrange for the lodge to deliver meals or supplies to the spacious cabin. It is one of the nicest places I have ever stayed.

Five Cacomistles were waiting for us at dusk when we arrived at our cabin. I didn’t see any Kinkajous during our two night say (though they were presumably around), perhaps because I only spent an hour or so each night looking at the Cacomistles before going inside to watch horror movies with my kids. They are lovely animals (the Cacomistles… not my kids). 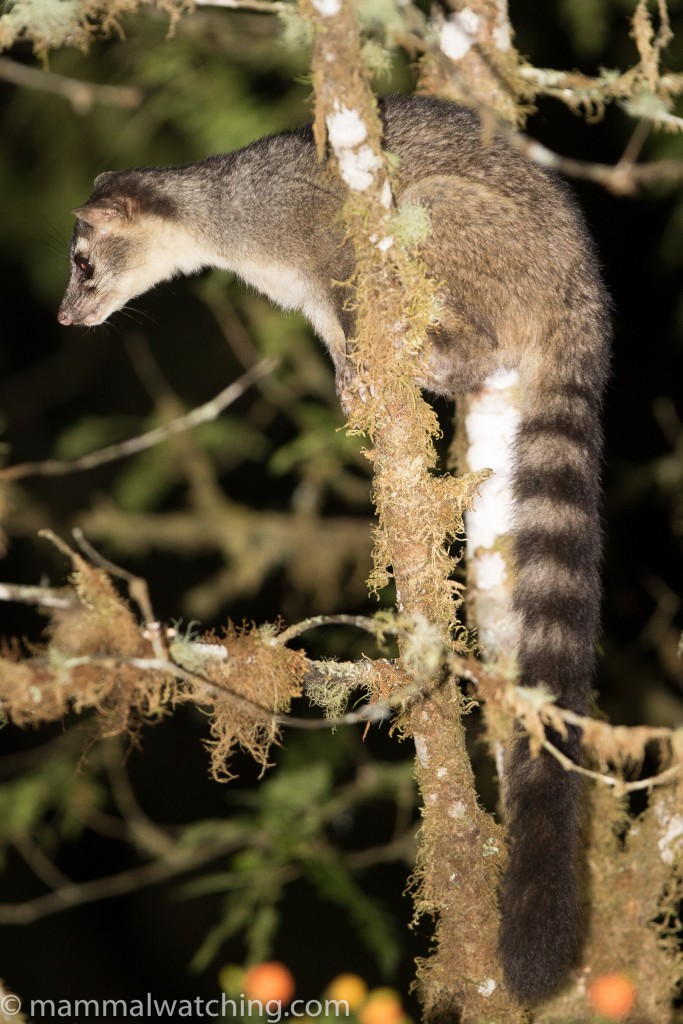 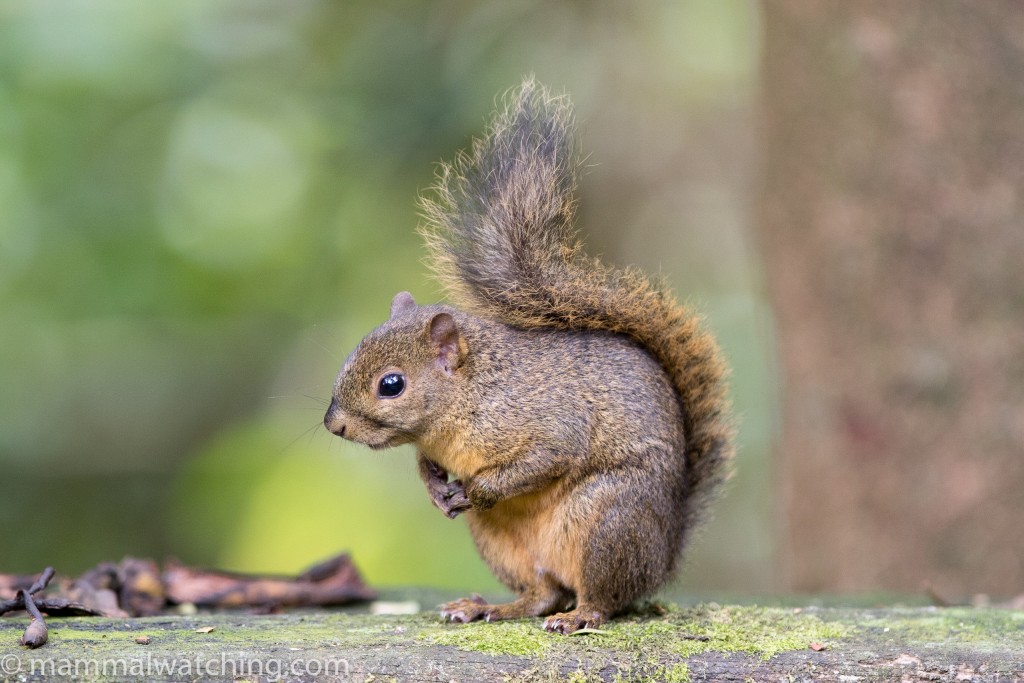 My son Patrick spotted a couple of Singing Mice under the feeding station the next morning which on closer inspection proved to be Chiriqui Singing Mice. 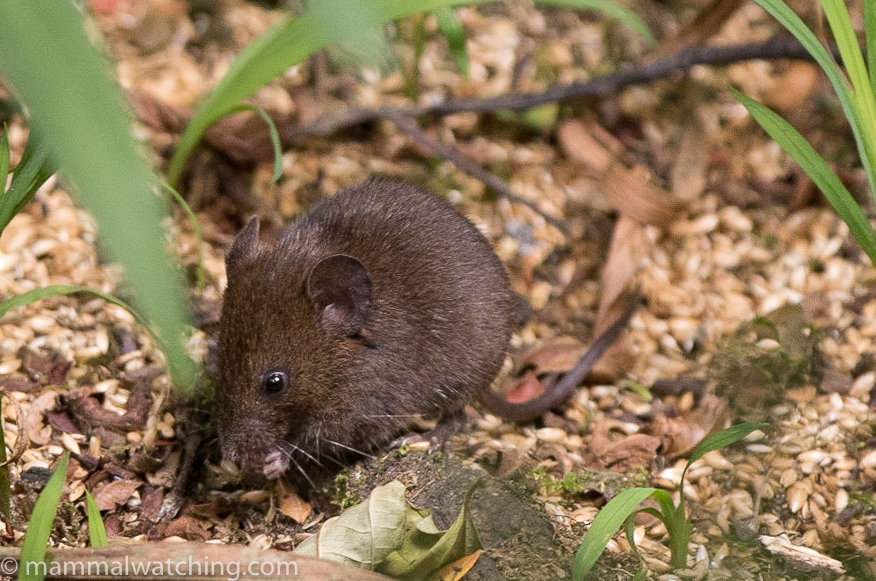 We also found a Montane Rice Rat, Talamancan Deer Mouse (a recent split from Mexican Deer Mouse) and a Chiriquian Harvest Mouse too (my 1498th mammal I believe). Oh and there were lots of Quetzals. 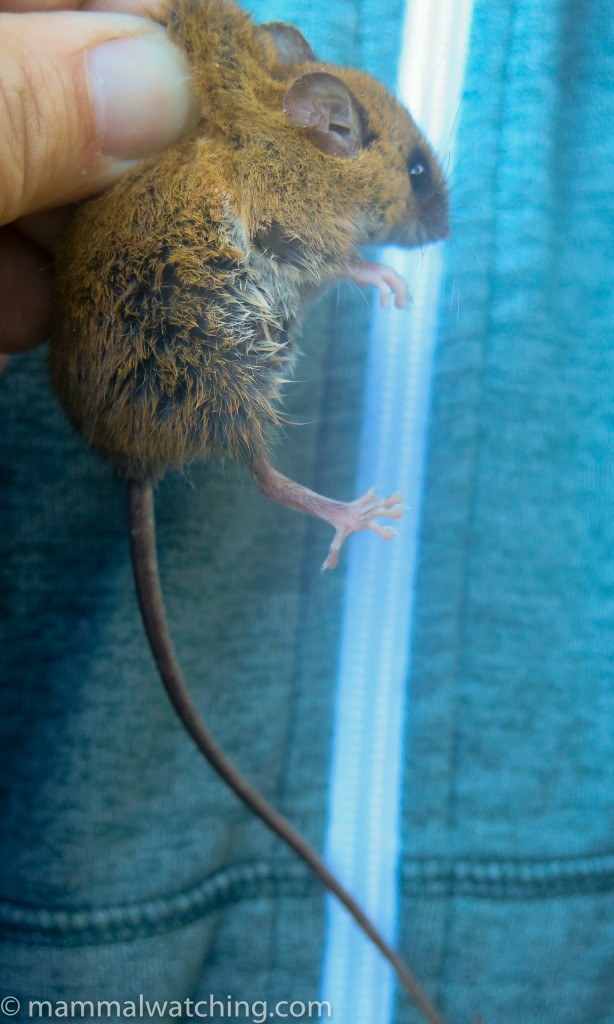 Although I walked the Los Minas trail three times – at mid-morning, dusk and dawn – I didn’t see an Alfaro’s Pygmy Squirrel. I suspect they prefer the smaller stunted trees such as those near the waterfall at the end of the trail, where I think Cheryl saw a squirrel, though that is just a hunch. 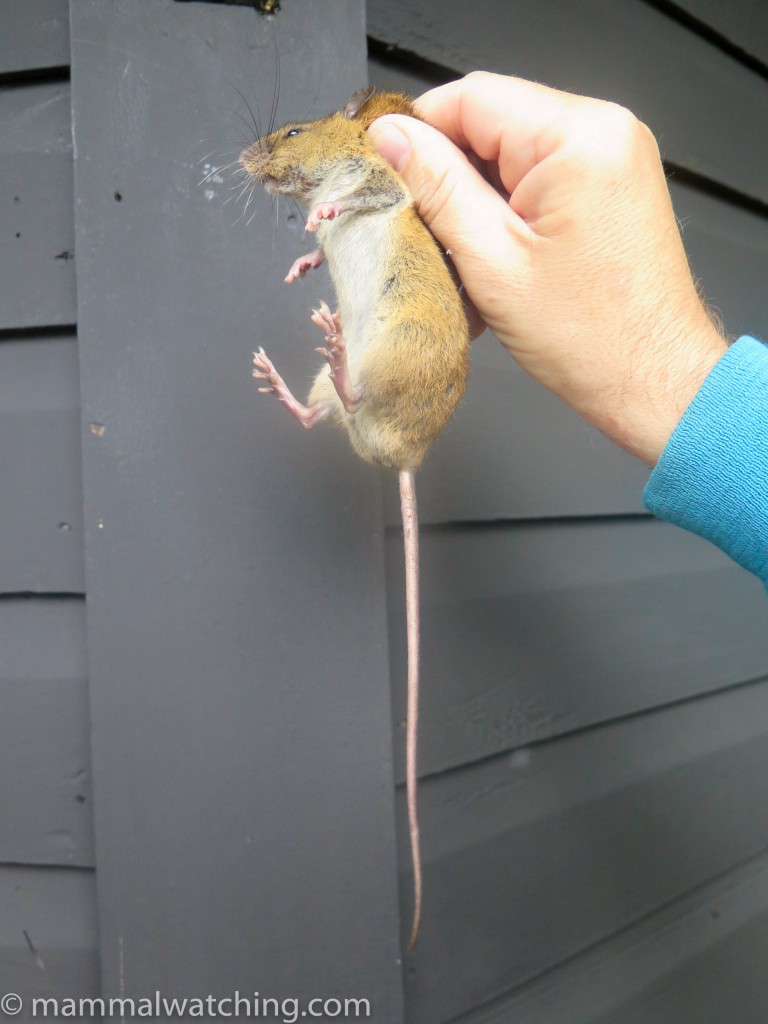 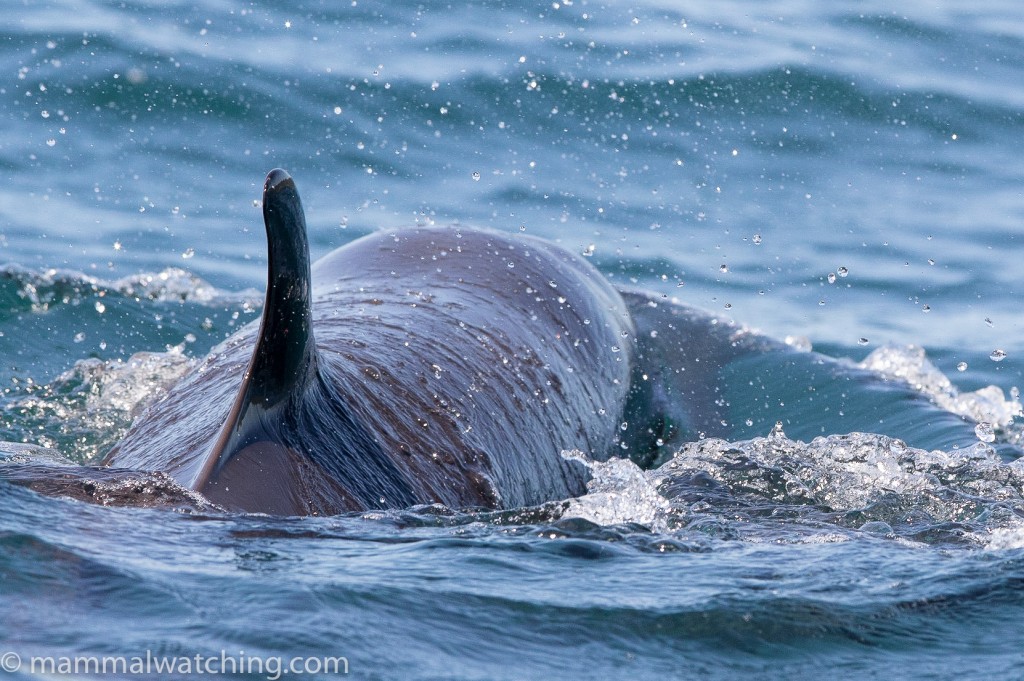