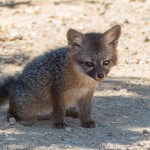 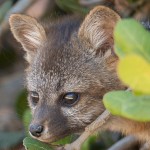 I had a free day and a half before leaving California, and checked out a few sites.

1. Tassajara Hot Springs: a charming Buddhist ashram with so many bats, it feels Neotropical. Mostly canyon bats and assorted myotis as far as I could tell. Mistnetting at the river pool below the kitchen should be a blast. The cook said that spotted skunks often visit the kitchen (particularly the place outside where people make themselves tea) at 9-10 pm. I waited from 8:30 pm till midnight and didn’t see any. The road (open only in summer) is not nearly as bad as the Springs’ website claims, and should be good for spotlighting, although I saw only one gray fox (and a Merriam’s chipmunk during the day). 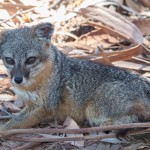 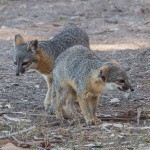 2. Prisoners Harbor, Channel Islands NP. Tame island foxes meet all arriving boats and hang around. I found a den with three fox cubs ~1 mile up Navy Rd., under a large shrub just before a huge wooden pole on the left side of the road. On the way back we saw a humpback surrounded a few dozen short-beaked common dolphins and California sea lions. To my surprise, there was one Guadalupe fur seal in that group. 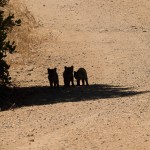 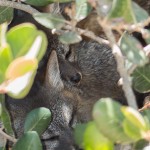 3. Someone on the boat told me that they saw some blackfish at Pt. Concepcion that morning, so I drove there and saw a pod of false killer whales just E of Government Point, about 100 m offshore. I jumped in the water and swam towards them, but, of course, had to stop 50 m away to comply with Marine Mammals Protection Act. A few animals approached me and gave great underwater views, but I had no wetsuit and had to leave after a couple minutes. Still a lot of fun, and an unexpected lifer.

P.S. I am now in New Jersey, and can guide personalized mammalwatching tours. We’ll look for rare, exciting local wildlife such as eastern cottontail, grey squirrel and feral cat. The price is $1000 per day, to compensate me for the trauma of leaving California.