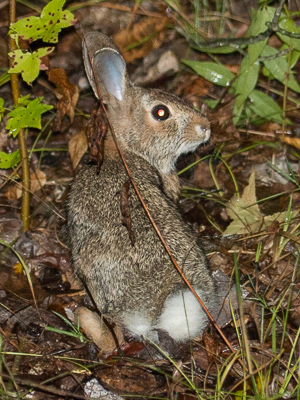 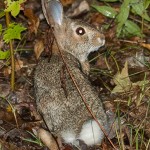 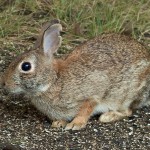 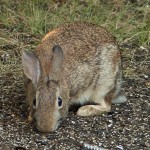 I checked out Thurstom Pond NWR last weekend. The spike in small rodent numbers reported last summer by Jon and then Venkat seems to be over. In a few hours I found just one southern bog lemming and a few runways of meadow voles. Eastern chipmunks are still abundant (as they are throughout the Northeast this year), and I saw one possible New England cottontail at the bird feeders. Three years ago that place had only eastern cottontails – perhaps New England cottontail is beginning to recover?

I then took a ferry to Block Island as there were recent reports of pilot whales seen from it, but saw only two harbor porpoises (they are not easy to see in Eastern USA, so might be worth it). The ferry is only $26 return.

On the photos are an eastern cottontail from Great Swamp NWR (New Jersey) and a possible New England cottontail from Thurstom Pond NWR (Rhode Island, 2 photos). The difference in ear length isn’t obvious until you actually measure the ears/head ratio on the photos, but note black line on the forehead, lighter hind feet, and more black on the ears. Eyering color and overall pelage are pretty much the same. New England cottontails at Cape Cod tend to be more distinctive; perhaps there is some hybridization going on?