Argentina: A weekend in Entre Ríos

I have long wanted to visit Argentina, even before I read Richard Webb’s 2013 report from El Palmar. But save for a brief excursion across the border from Brazil at Iguazu Falls in 2009, I had to wait until June 2017: a work trip to Buenos Aries gave me an opportunity to spend a long weekend in Entre Ríos province, primarily in El Palmar National Park.

It took about 4.5 hours to drive to the park from the airport with help from google maps and nerves of steel: negotiating the roundabouts and junctions in Buenos Aries is not for the faint hearted. Giving way to traffic is not in the local culture. 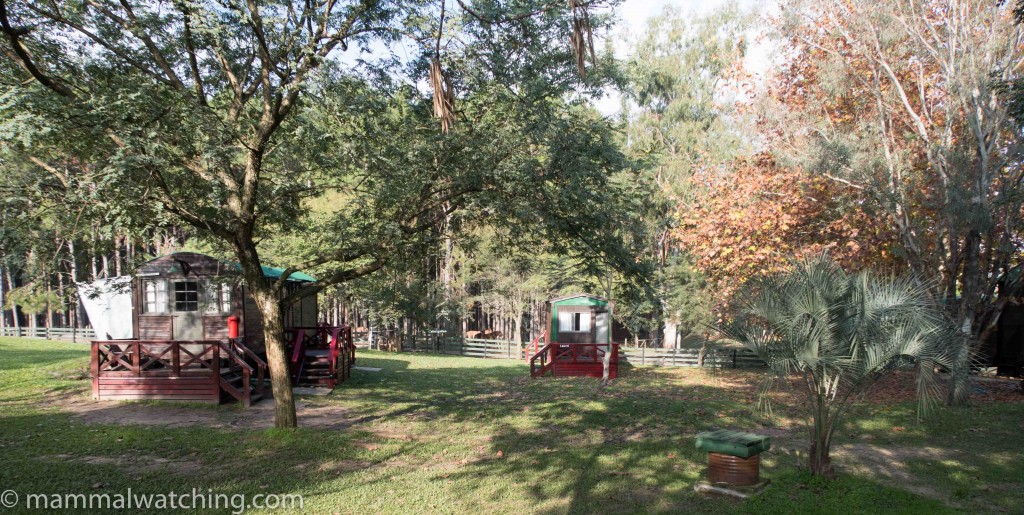 Like Richard and Phil Telfer I stayed in the really very nice Aurora del Palmar lodge, the closest accommodation to the park, though the park campsite was also a nice spot and would be a good option. Aurora is a working farm, with dormitories and train wagons to stay in. I took a wagon, now a lot more expensive than the $11 a night Richard had paid (more like $80 a night for B&B), but it was cozy and there was room for four had I needed it. The food was really good (and so was the wine) and the staff friendly. They gave me permission to set some mammal traps around the property. 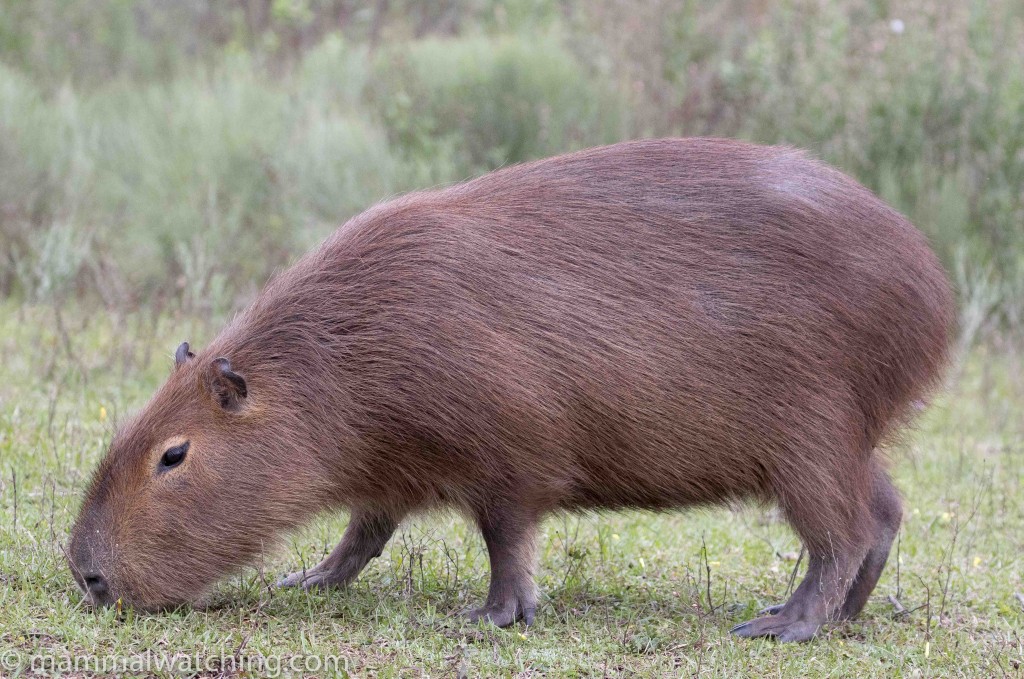 I got into the park late Saturday afternoon and will not add unnecessary details to those provided by Richard in his comprehensive report. Steve Morgan’s and Phil Telfer’s reports provide additional useful information. The park’s mammal list is comprehensive and the animals are for the most part quite tame. 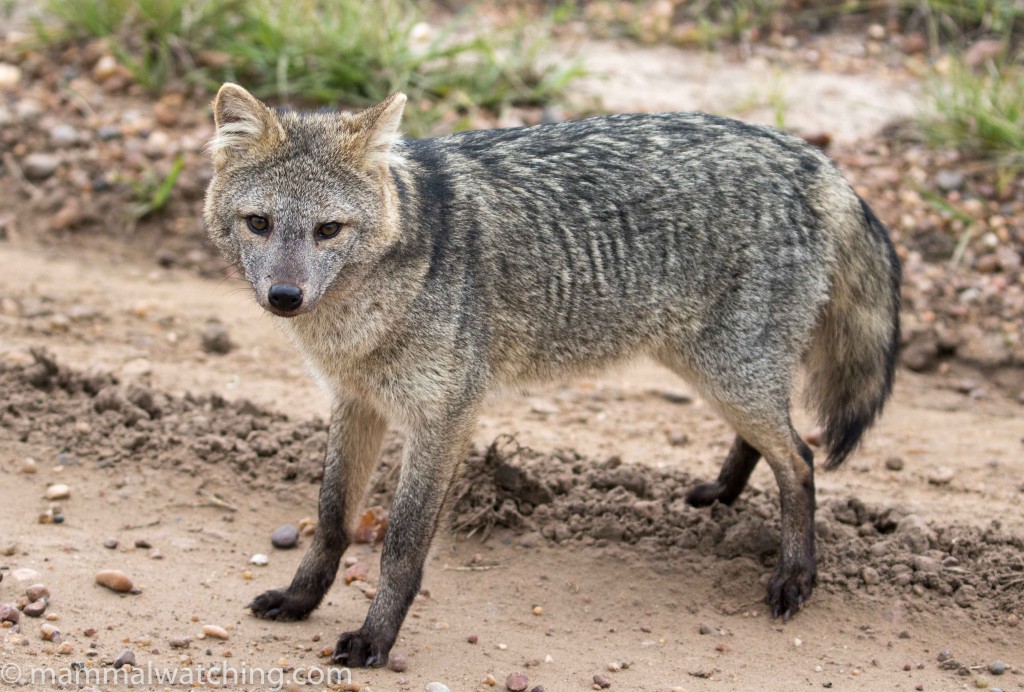 I saw a couple of Pampas Foxes half way down the Los Loros track, and a few Chital Deer crossed the road near the bridge at dusk. I spent a little time parked on the hill before the bridge scanning as Richard and Phil did. 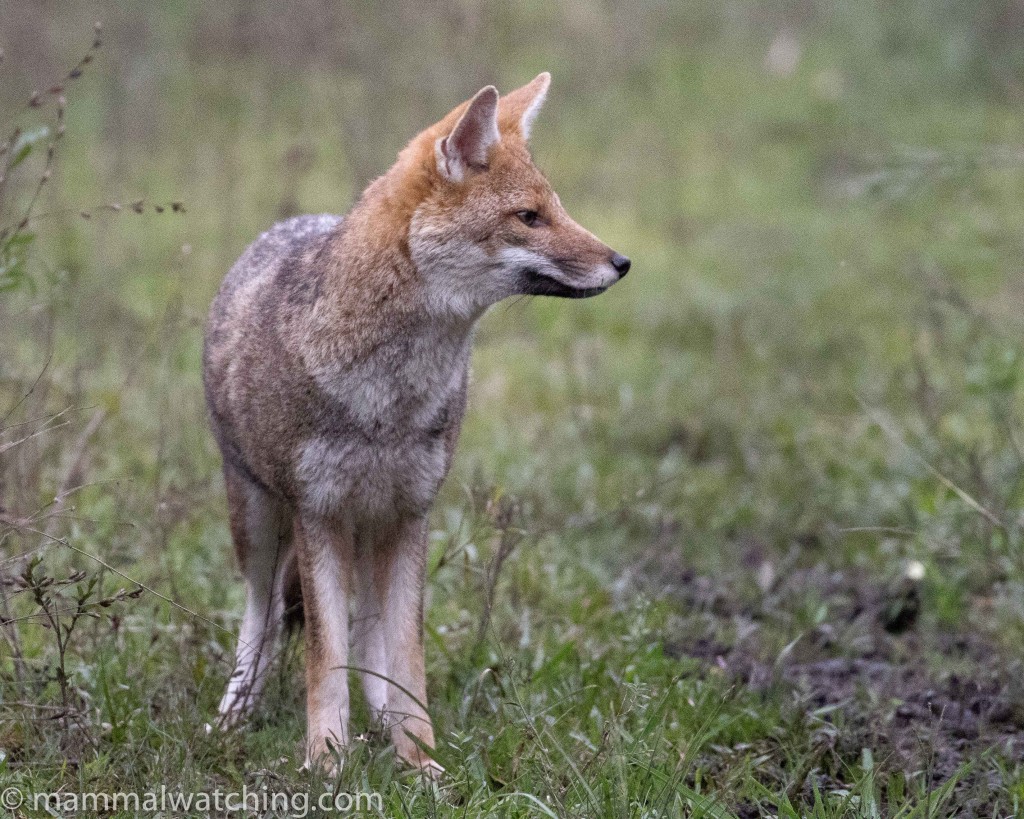 After dark on my first night I drove around with a spotlight for a couple of hours. The first highlight were the abundant – and I mean prolific – Plains Viscachas all through the campsite 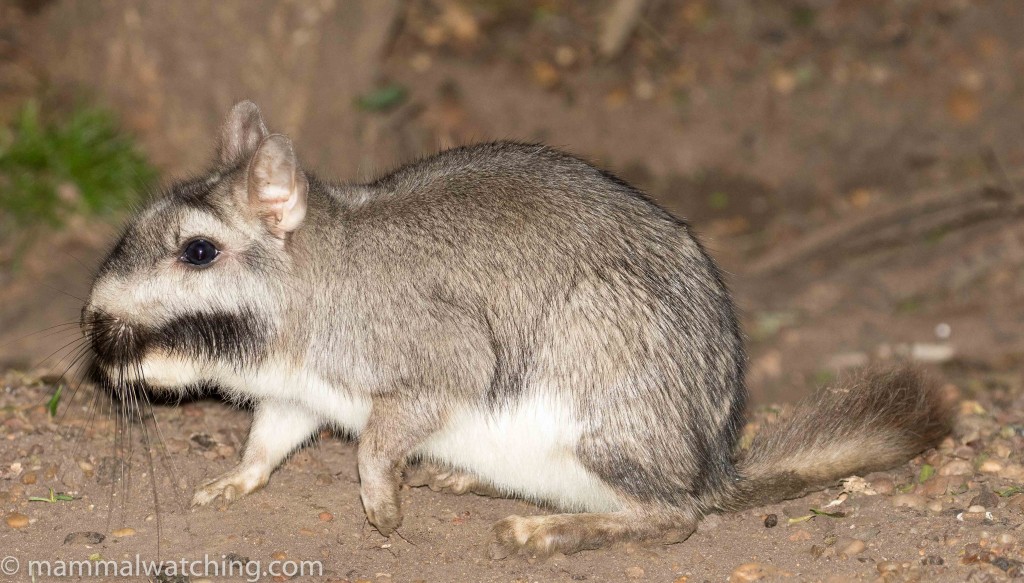 Back at the junction to the camping turn off I saw a rather hairy Six-banded Armadillo wandering across some open ground.

I tried to turn this into a Large Hairy Armadillo, something that hasn’t been recorded in the park but ought to be there. I don’t think this is quite hairy enough but I would love to be contradicted.

Driving slowly back to the gate, weaving between the Capybaras and Crab-eating Foxes, I saw a cat sitting by a pond (this was about half way down the main road): a melanistic Geoffroy’s Cat that sat with its back to me for a while. It seemed to have a greyish head and a dark chocolate back. 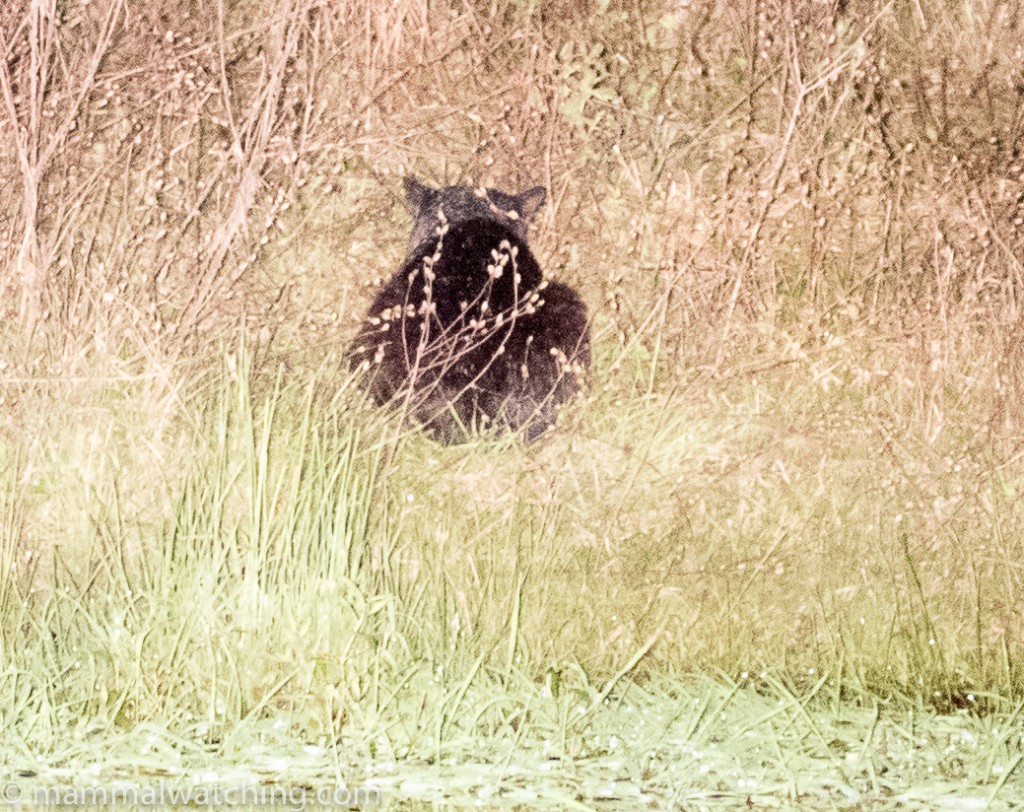 It then moved back into the vegetation closer to the road (perhaps because I was squeaking). I could see its face looking at me through dense vegetation from only 10 metres away but the only picture I could get was this dreadful one, with its back to me when I first saw it. But my photos were terrible. 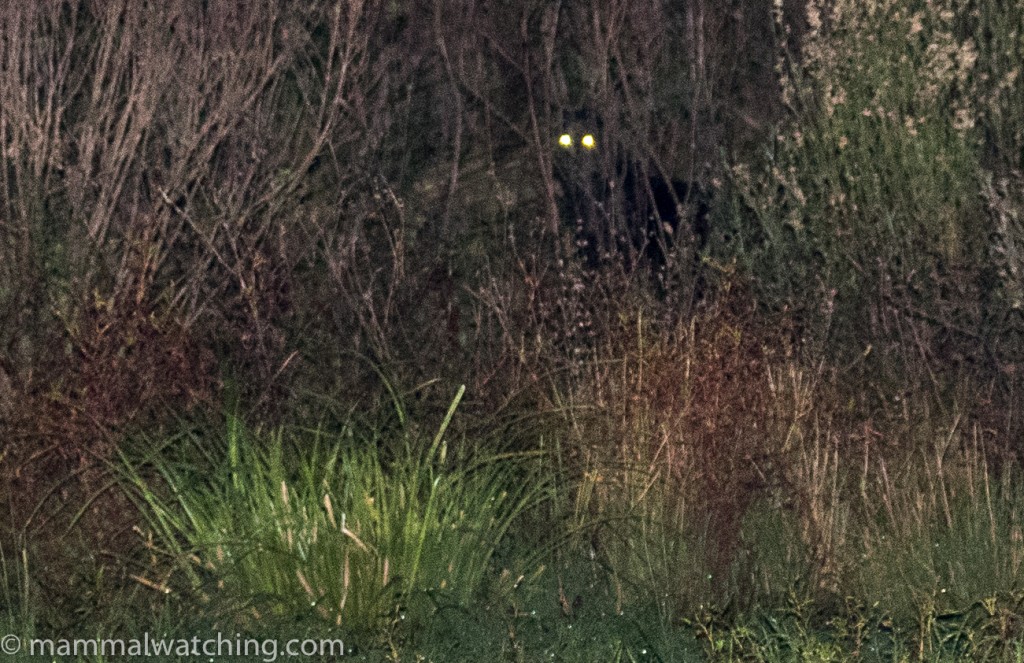 But, my prime target here were the Lesser Grisons. Both Greater and Lesser Grisons seem extremely hard to see across South America. But not in El Palmar. Richard and Phil had several encounters here. I have long had a theory that there is a good site for every mammal, its just that we don’t know where some of the sites are yet. El Palmar is the place for Lesser Grisons. 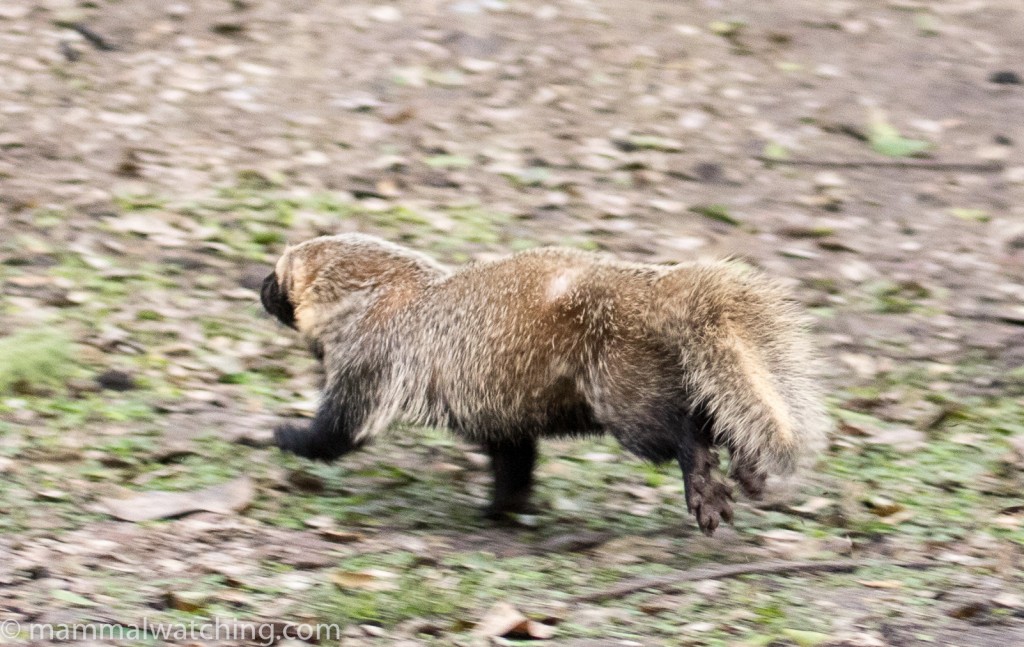 Phil told me he’d heard they were common in the campsite this time of year, which the helpful staff at the campground confirmed. Up to seven were running around earlier the day I arrived and I was told the Grisons come into the campsite in winter to hunt Viscachas.

I spent most of Sunday loitering around the empty campsite, eventually enlisting the help of both a guy in the office, and the owner of the cafe, to help find me a Grison. They both saw one before I did, and suggested to me that the animals were not co-operating because it was overcast and a little cooler than usual. Finally though, at 3 p.m., I got a brief look at a Lesser Grison running across the grass near teh campsite entrance. It bolted under the floor of a partially constructed wooden house just to north of the campsite entrance (on the left hand side if you are at the campground gates and looking towards the camping areas). 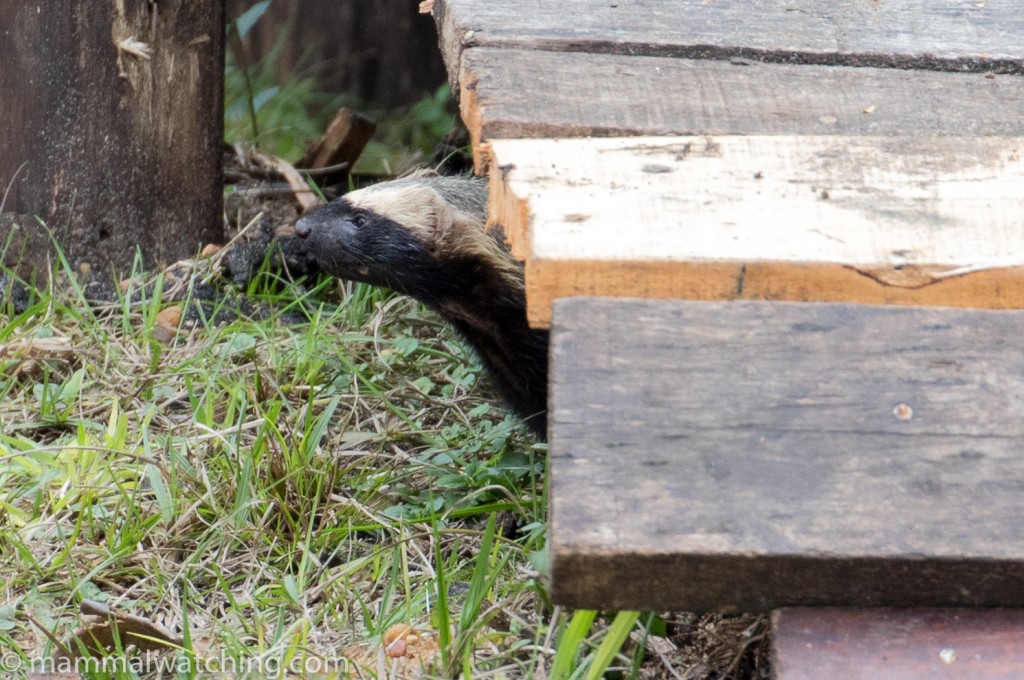 I sat down and waited. Fifteen minutes later I had a truly fabulous encounter as I watched one, then two, three, four and five Grisons emerge from under the house and belt across the open ground before holing up under a bush just 3 metres in front of me. 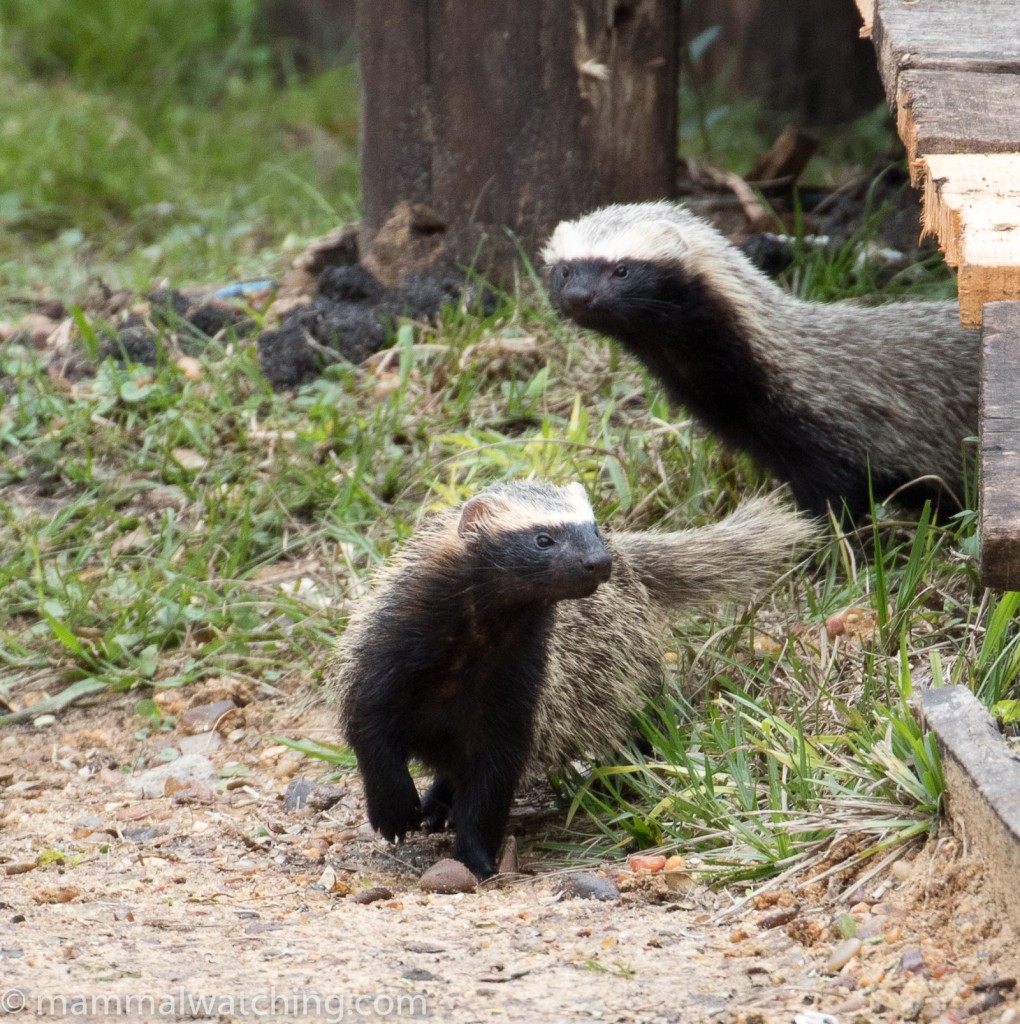 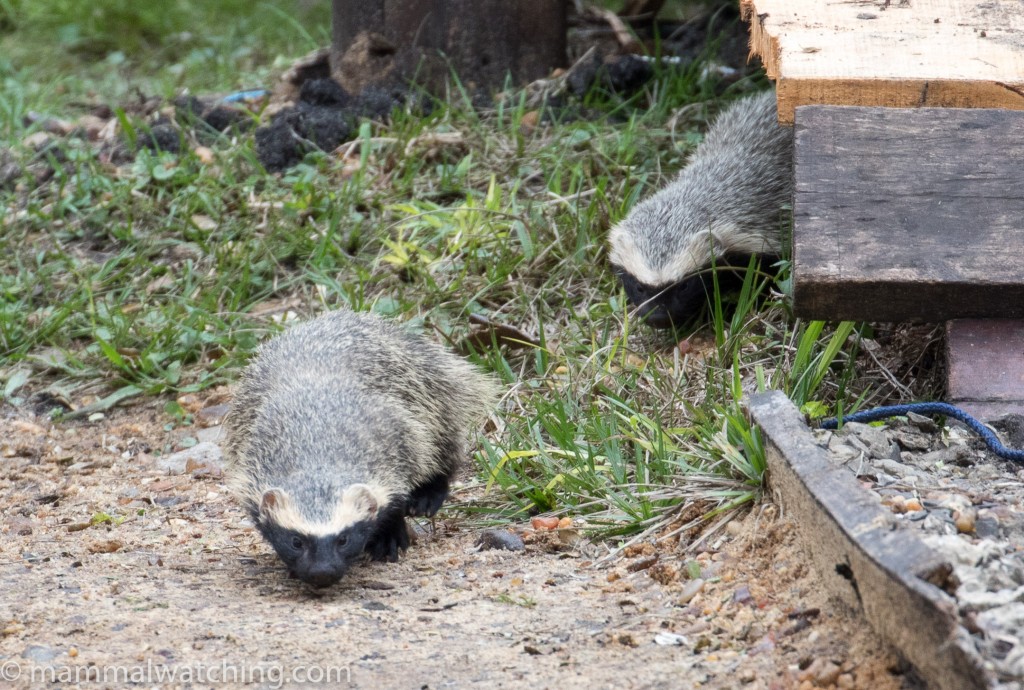 They loitered there for a while before continuing into a Viscacha burrow a few metres further on. Magical. And really fabulous – strange looking – beasts. 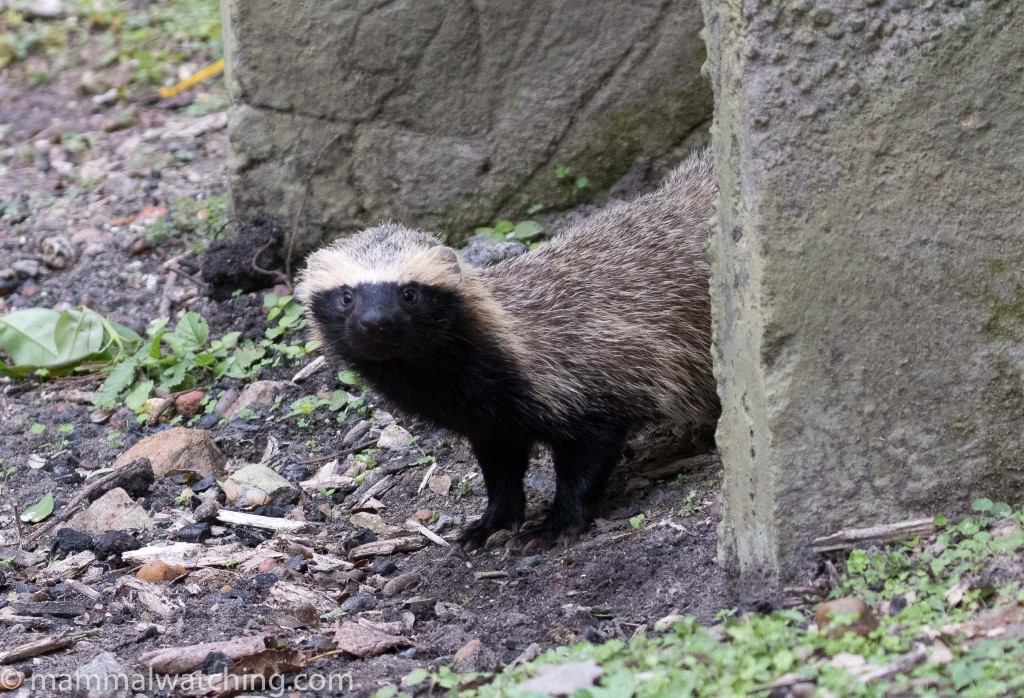 Sorry for going a bit overboard on the photos here: I love these animals!

I returned to the hotel before going back to spotlight in the park at 7 p.m. I had had no issues with any of the rangers on Saturday night (one had stopped to ask what I was doing when I had parked up to look at the Geoffroy’s Cat and was shining a light in its direction: but when I said “es un gato” he gave me a smile and a thumbs up). But a different crew were on duty that night. They stopped me not long after I got into the park – and just after I had a seen a Grey Brocket Deer – to tell me that spotlighting was forbidden. I understood (or thought I did) that so long as I kept my light on the road and didn’t point it directly into the bush it was OK. Apparently I was wrong. They stopped me an hour later and gave me a final warning: spotlighting, they said, was totally prohibited.

Moreover, by 8 p.m. they had closed off all the side roads with wooden barriers, something they hadn’t done on Saturday, though as I had left the park not long after 8 p.m. they may have done so later.

A pity that things are not as relaxed as they once were, but still an excellent park and with more effort than I put in around dawn and dusk still probably an easy place to see a Geoffroy’s Cat even without spotlighting.

On the way out of the park on Sunday night a rather small black cat jumped across the road, which may have been a domestic cat or another Geoffroy’s Cat. 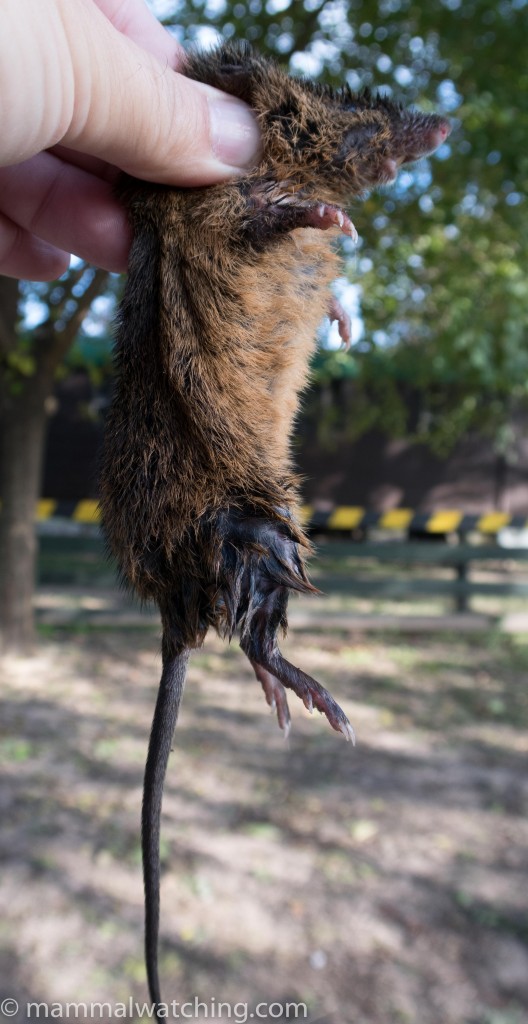 Though I set a bunch of traps in the long grass and scrub directly next to the lodge, the only mammals I caught on both nights were in the much more diverse vegetation alongside highway 14 (at the turn off to Aurora del Palmar)

My mammal traps on the first day held only one rodent, a Pygmy Rice Rat that I think must be a Black-footed Pygmy Rice Rat (Oligoryzomys nigripes). The other possibility from the genus on the park list is Oligoryzomys flavescens but both the measuerments and colouration was off for this species.

On the second day I was more successful, with half of the ten traps in the same line containing animals (but still nothing in my other traps). 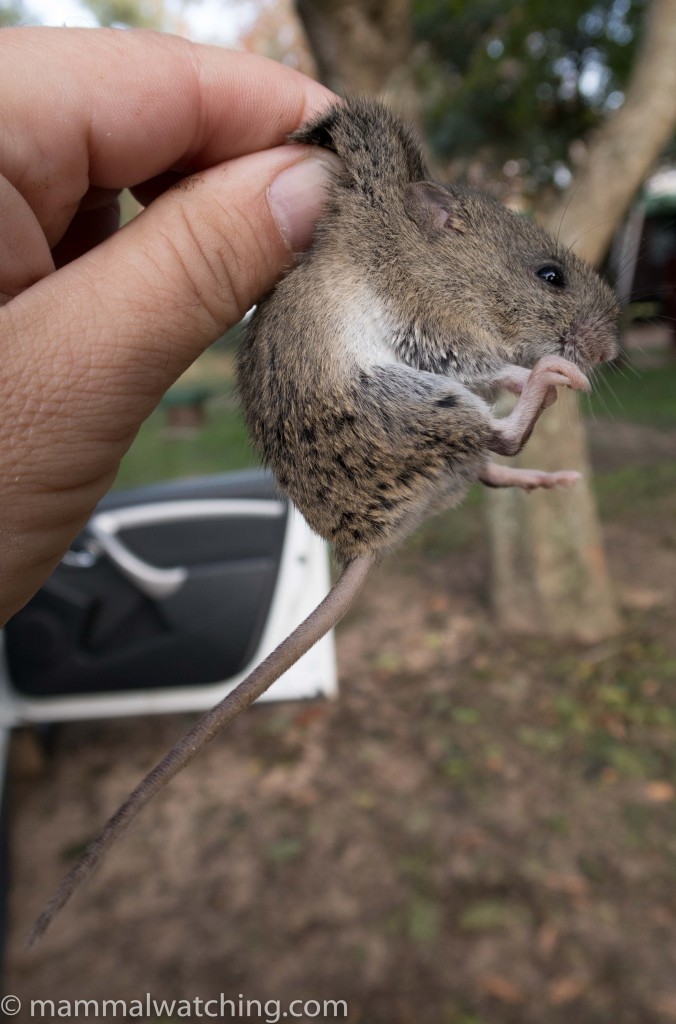 This caluromys gave me a bloodier bite than usual and lived up to its name of Crafty Vesper Mouse. The very similar Calomys callosus also occurs according to the park list, which may in fact be the same species. But the type locality for C. callidus is in El Palmar and everything seemed to fit with this animal. 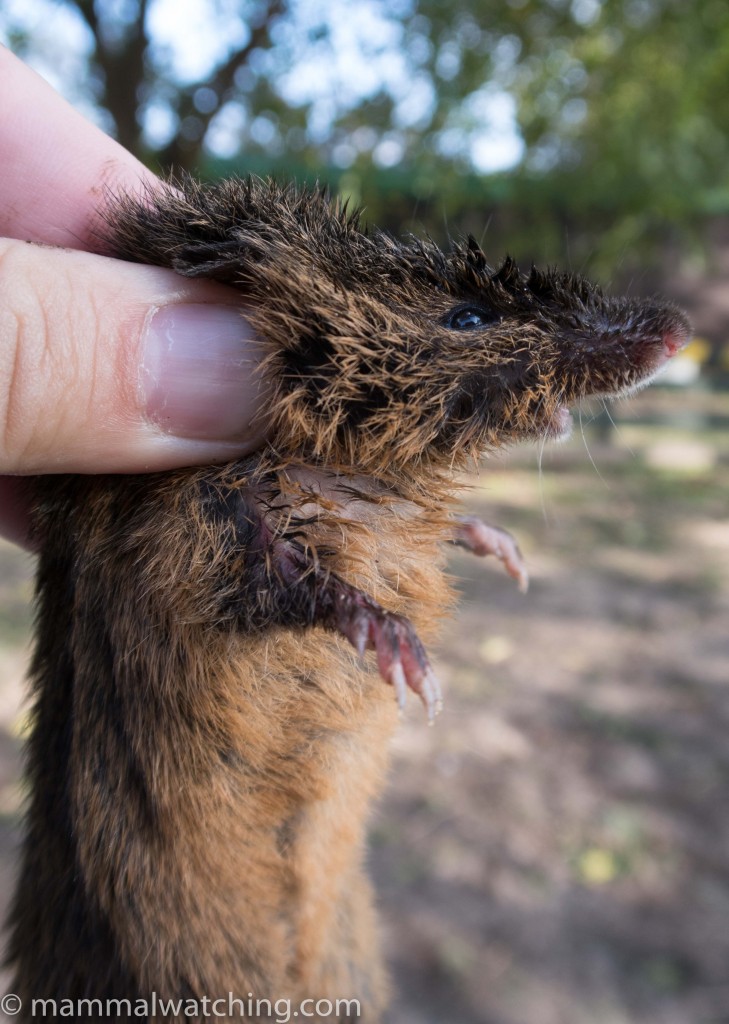 Next up were a couple of the very cool Red Hocicudo. A quite strikingly coloured and distinctive chunky beast. 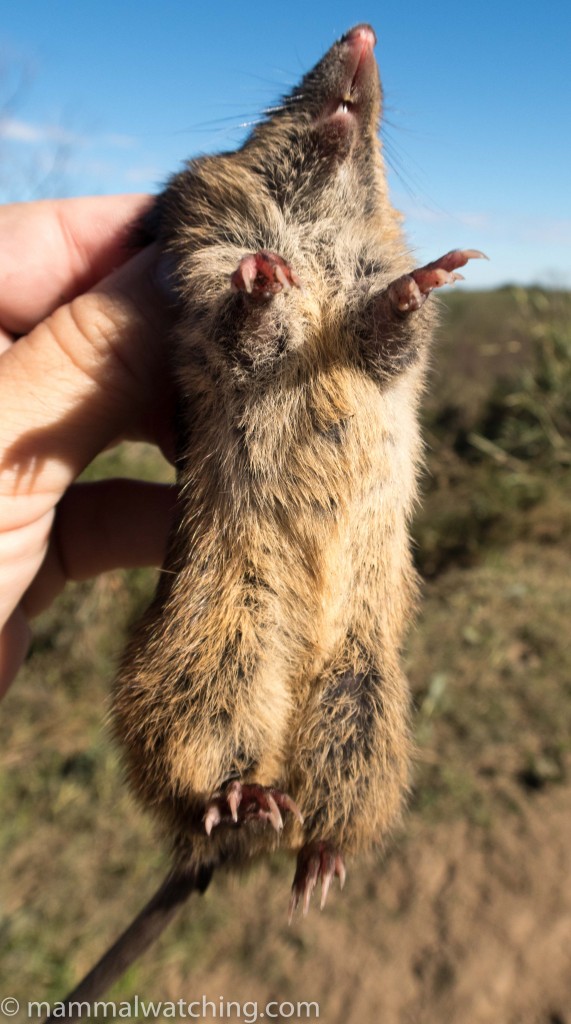 I also caught another Yellow Pygmy Rice Rat, albeit larger than the one from the day before. 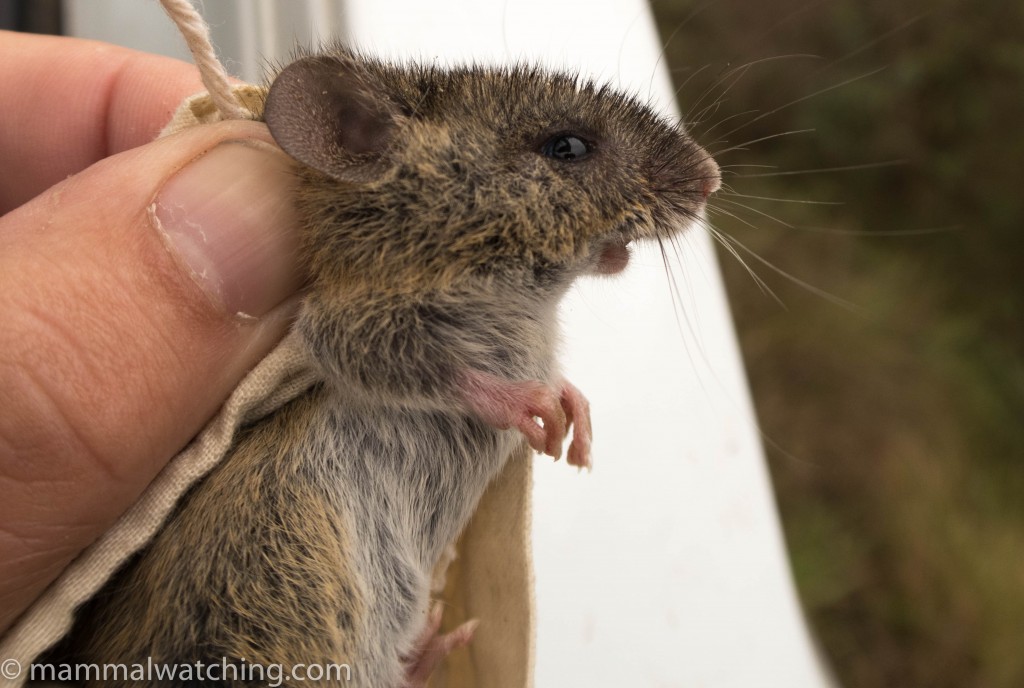 And this Azara’s Grass Mouse was the fourth species in the traps that morning. All of them lifers for me. 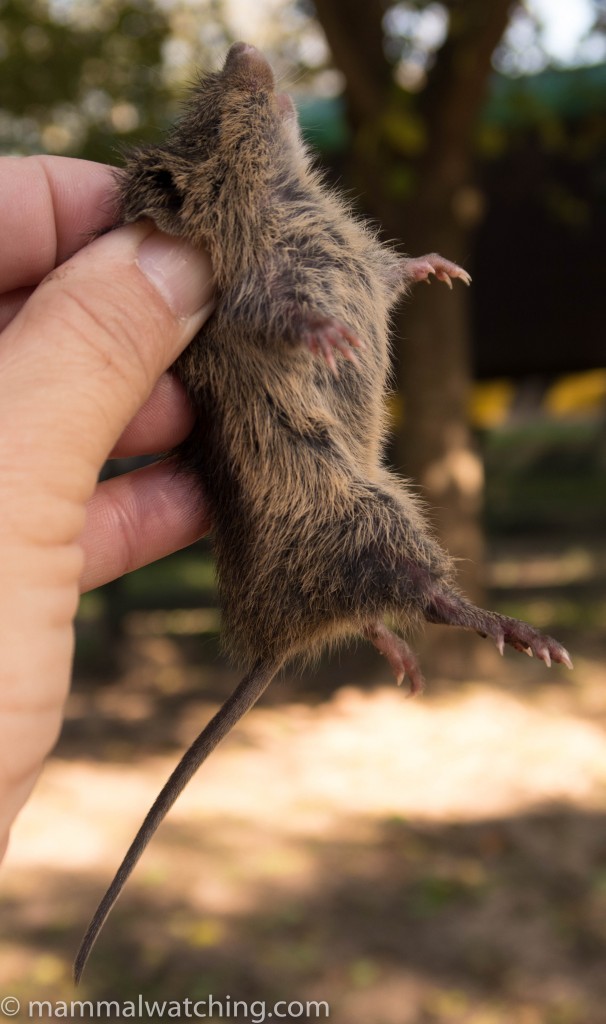 I had originally planned to spend three nights in Aurora del Palmar. But a school group was arriving on Monday, which coupled with my general success and the no spotlighting directive, meant I was ready to leave. I decided to head south and spend a night near Ceibas to look for Pampas and more Geoffroy’s Cats in the spot Richard Webb described. 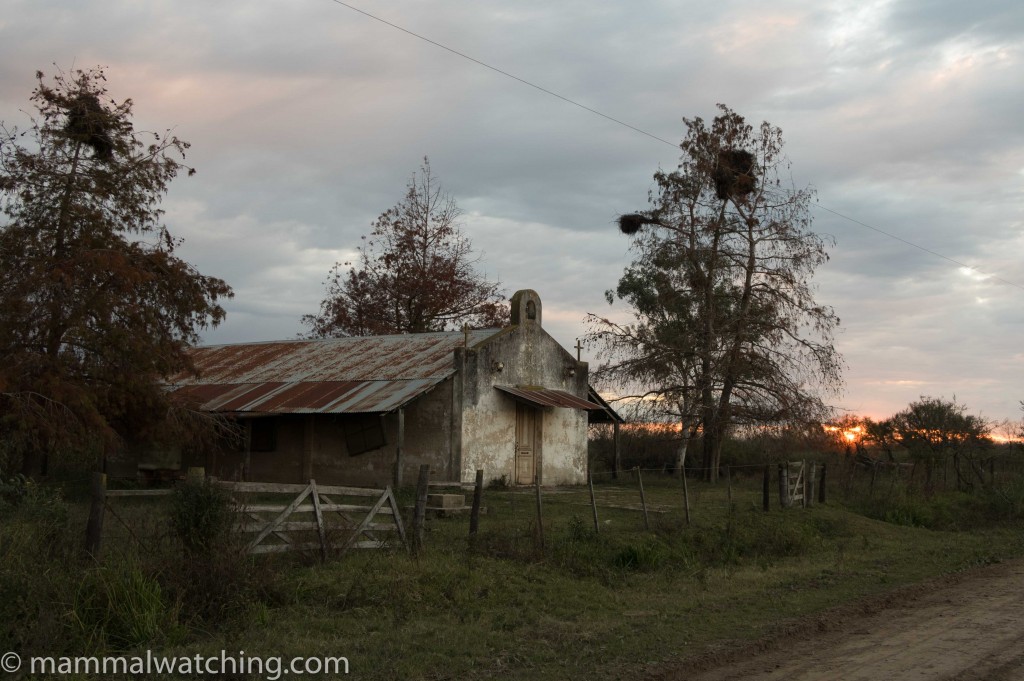 I stayed in Gualeguaychu, a small town with the some terrible road surfaces and countless intersections where it is not at all clear who has right of way. Standard practice seems to be to put your faith in a higher power, clench your teeth and go for it.

Talking of higher powers, if you visit you must put your faith in Richard’s directions not Google Maps. The latter to an offshoot of Ceibas on the west side of Rt 14., and hence in the wrong direction (yes I should have looked at a map first). There is however a shorter way to cut to the best area from the north, rather than driving al the way down to Ceibas, as Richard describes. And you can let Google Maps take you there if you follow directions to here, the fork in the road that Richard talks about, beyond which he saw a couple of cats.

The wetlands were glorious, full of birds and life, but when I got to the fork at the end of the road there was a titanic and very muddy puddle spanning the road. It was late and I had visions of getting my 2wd stuck: something that has happened so often in the past it isn’t funny any more. So I turned around and thought I would try my luck along the roads I had drive on, which certainly seemed like they could produce a cat. But I didn’t get down either of the roads that Richard saw his cats – and cat tracks – on in 2012. No cats, but I did see a couple of Coypu along the road.

I set some traps which I picked up early the next morning on my way to Buenos Aries. I caught three of what were late confirmed as Kemp’s Grass Mice (Deltamys kempi) (thank you Pablo Teta!). 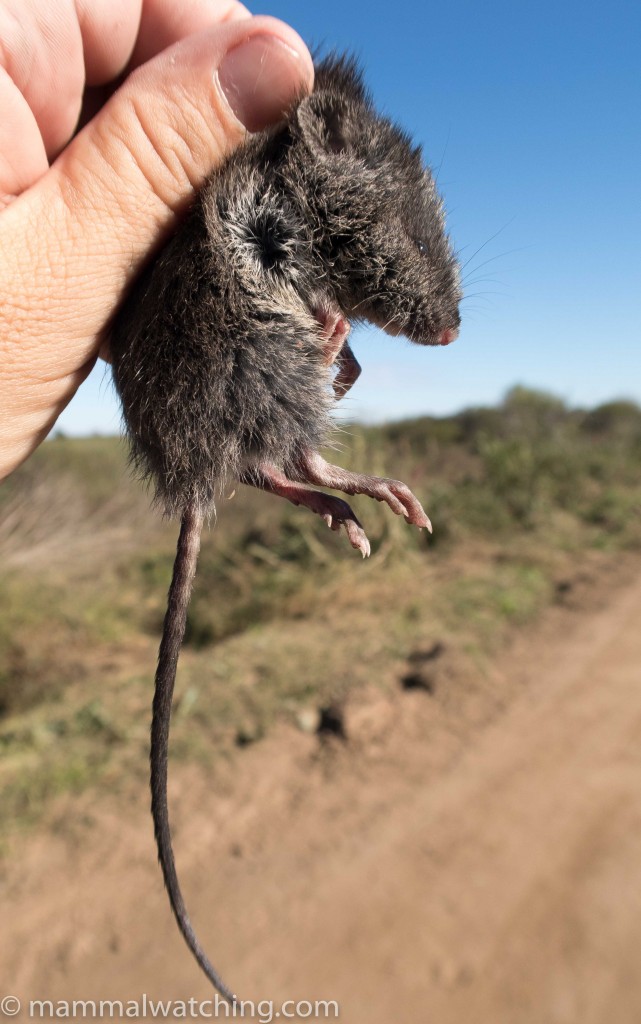 I also caught another Red Hocicudo, which was less strikingly orange than the two I had caught in Aurora del Palmar. 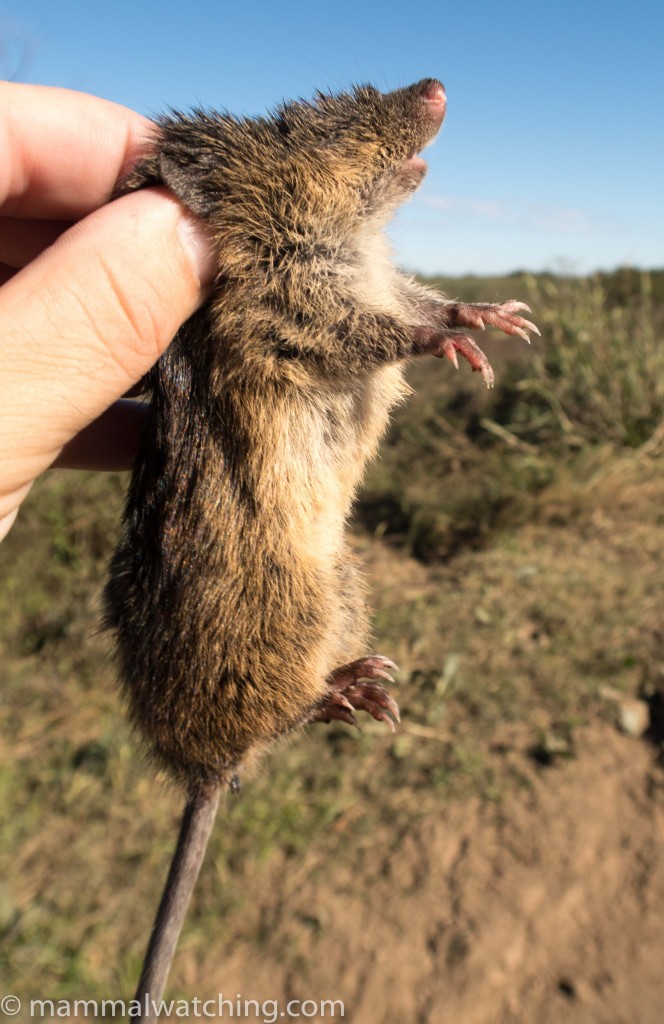 And from there is was back to Buenos Aries to put on a suit, start work and eat enormous quantities of steak. What a great city.

A fairly comprehensive list of the mammals of El Palmar is here. There is a chance for Pampas Cat, and a possibility of both Southern Long-nosed Armadillo and Large Hairy Armadillo (not yet recorded in the park but which ought to be around), so I had my eyes open for both of them. The other largish species I would like to have seen that I missed were Molina’s Hognosed Skunk, not uncommon along roads in the park after dark, and of course it would have been nice to have seen a Jaguarundi again. There were a few more rodents to find including the wonderfully named (and cute looking) Bunny Rat (Reithrodon auritus) and a couple of Tuco Tuco species. 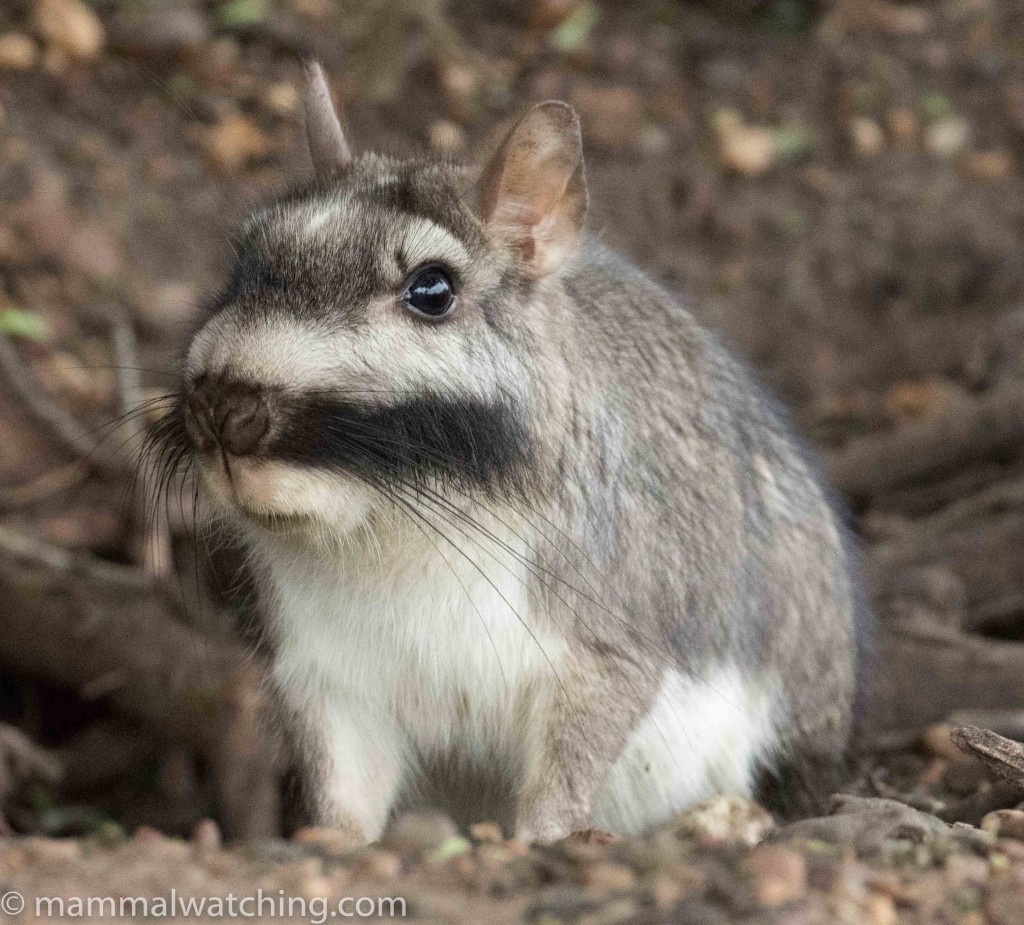