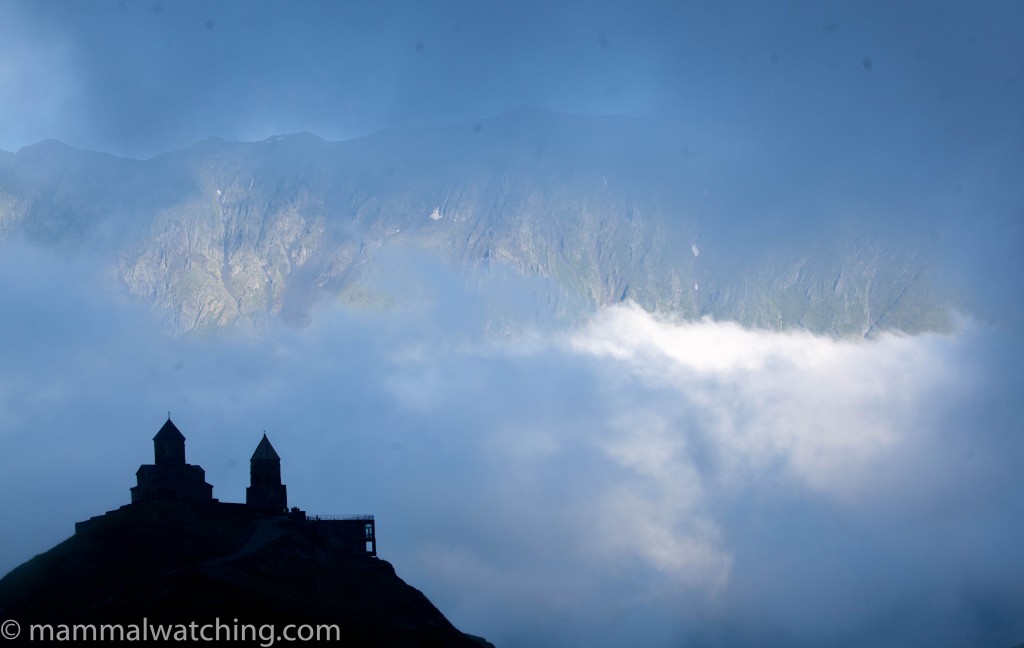 I visited Georgia for 5 nights in July 2017. I was travelling with my kids and tried to make the trip about more than mammals. I am not sure I succeeded: “more than mammals” is uncharted territory for me. But I certainly took the mammal watching a little easier than I would have done had I been on my own.

I, like just about everyone I spoke to who has been there, enjoyed the country very much. Georgia would be an easy place to travel around independently but I used a guide, primarily because I wanted to try to catch small mammals, something that I was told was not allowed anywhere without permission.

I used Bogdan Eriashvili. Bogdan works as a part-time guide with his father, Shota, a retired National Park mammalogist in Lagodekhi National Park. He organised our trip well and at a very reasonable price: in fact had we hired our own car and arranged a taxi to Yerevan in Armenia (our onward destination) it would probably not have been much more expensive than using Bodgdan. He – and his dad – are also good company and knowledgeable.

Shota does not speak any English so Bogdan organised everything. Communicating with him over email was easier than speaking in person, but I think we managed to understand each other most of the time. 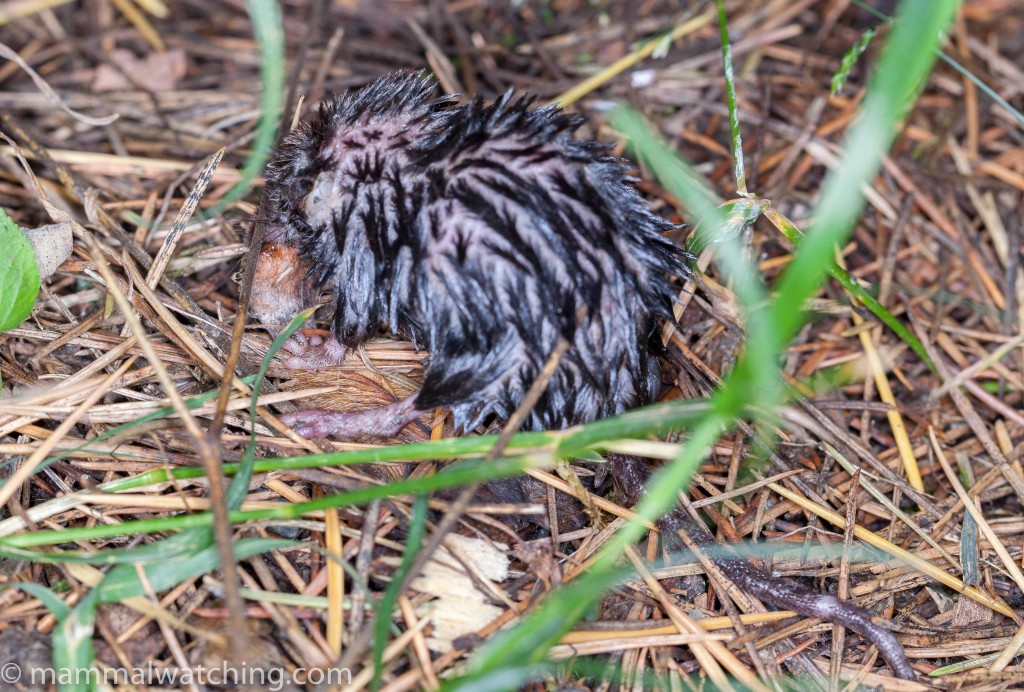 Georgia is home to both Eastern and Western Turs, the two only Capra goat species that I haven’t seen. After talking to Dominique Brugiere and others I learned that Western Turs are pretty hard to find: though they are sometimes seen in the mountains at Svaneti it can take a days to see one. They are easier to see in neighbouring Abkhazia, a breakway state that Georgia, and most of the world other than Russia, still see as part of Georgia. Entering Abkhazia from the Georgian side seems quite tricky at the moment.

Eastern Turs, however, should be easy to see. They are commonly – and conveniently – seen around the small town of Kazbegi (aka Stepantsminda) on the border with Russia, due north of Tbilisi. A decent population also lives in the mountains of Lagodekhi National Park in the east near the border with Azerbaijan. 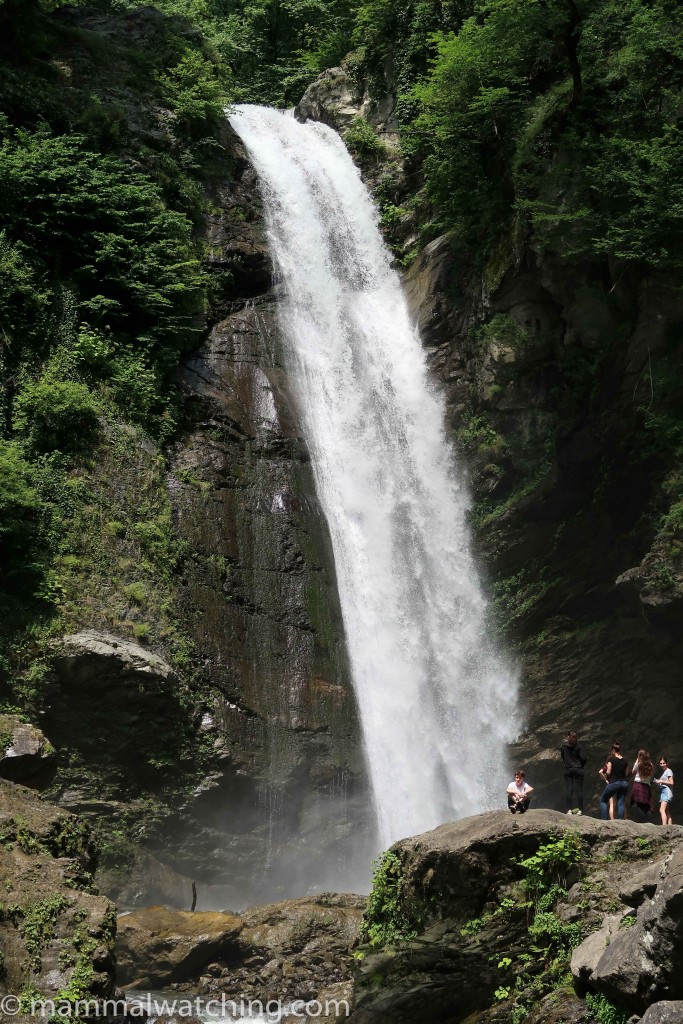 Eurasian Lynx aside (present but as hard to see as it is everywhere else), the other mammals I most wanted to see in the country were rodents or shrews. After chatting with Bogdan I decided to spent a night at Kazbegi to look for Eastern Turs and then three nights at Lagodekhi National Park to catch small mammals with his father. 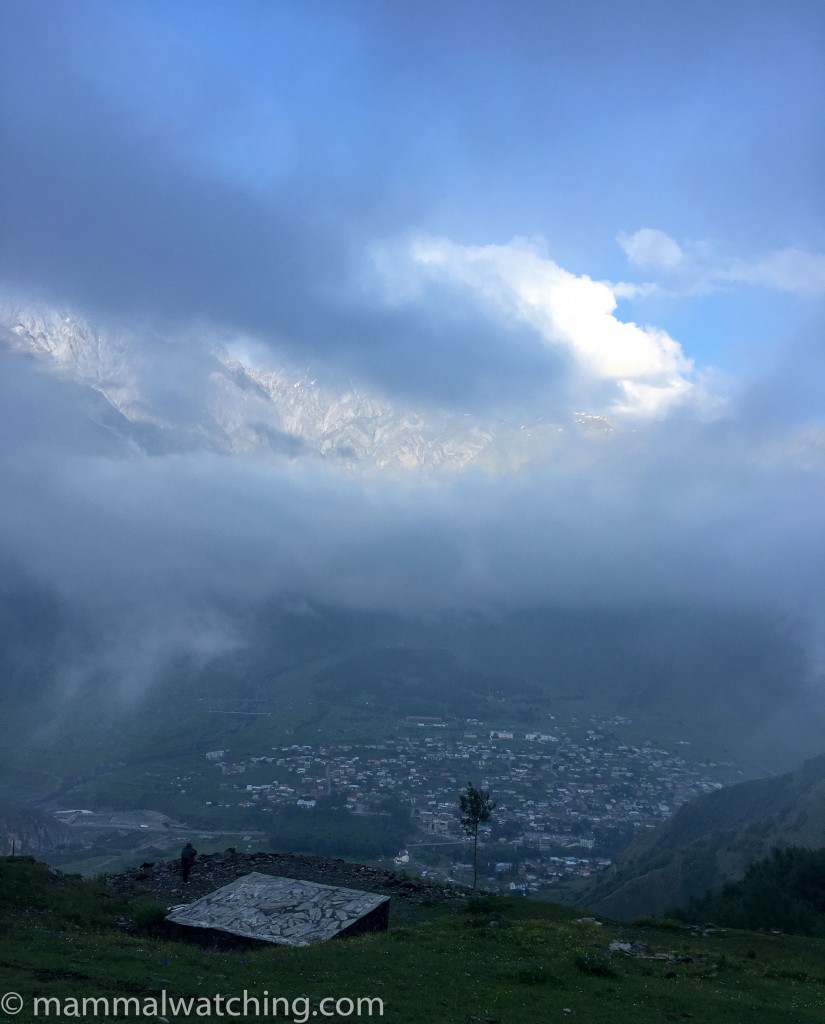 Eastern Tur habitat behind the clouds

Kazbegi, now often called Stepantsminda, is a three hour drive from Tbilisi and a popular tourist town. Eastern Turs should be fairly easy to find, with a scope, on the mountains on either side of the town. Unfortunately the weather was against us.

Late in the afternoon we took the (very rugged) road up to Gergeti Church. A scenic spot which gives a commanding view of the mountains. Its a popular spot with birders and Eastern Turs are often seen around here, though you need a scope. But we were encircled with thick cloud and mist and had just fleeting opportunities to scope out small sections of the mountains as they appeared then disappeared back into the mist.

We stayed in a small guest house on the east side of the village, at the base of the mountains. Bogan said in the morning we ought to be able to see Eastern Turs on the mountains we were backing onto. Early morning was the best time to catch the goats climbing up to their feeding grounds.

The clouds cleared over night but – spot on dawn – a thick wall of mist rolled down the valley and the mountains disappeared. Damnation! I guess I have been very lucky over the years because I am not used to bad weather getting in the way of mammal watching.

We spent the morning looking for Turs, driving the 10 km to the Russia border and scanning the hills en route, and eventually getting a twenty minute window of cloudlessness to look at the mountain behind the guest house. But – perhaps because now it was quite late in the morning – we didn’t see any animals.

At lunchtime we left for the five hour drive to Lagodekhi National Park in the east of the country. 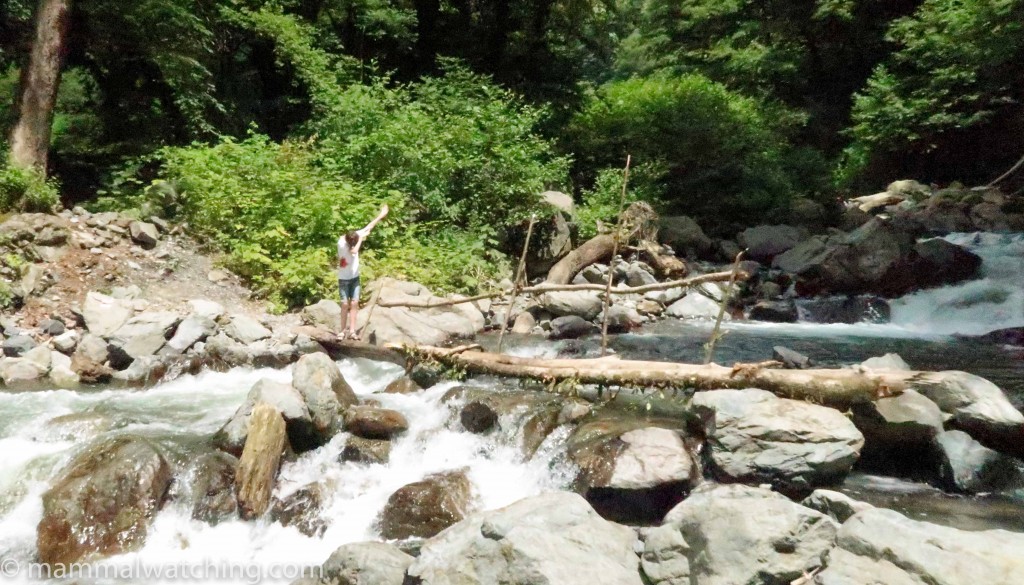 Lagodekhi Nature Reserve protects some 25,000 hectares of beautiful forest and the mountains above it. Bogdan grew up here, and his father, Shota, knows the park and its wildlife like the back of his hand after working in it for 50 years. He’s also impressively fit for a man of 79.  Though the park is strictly protected he is allowed to trap there and has spent years running small mammal trapping surveys. 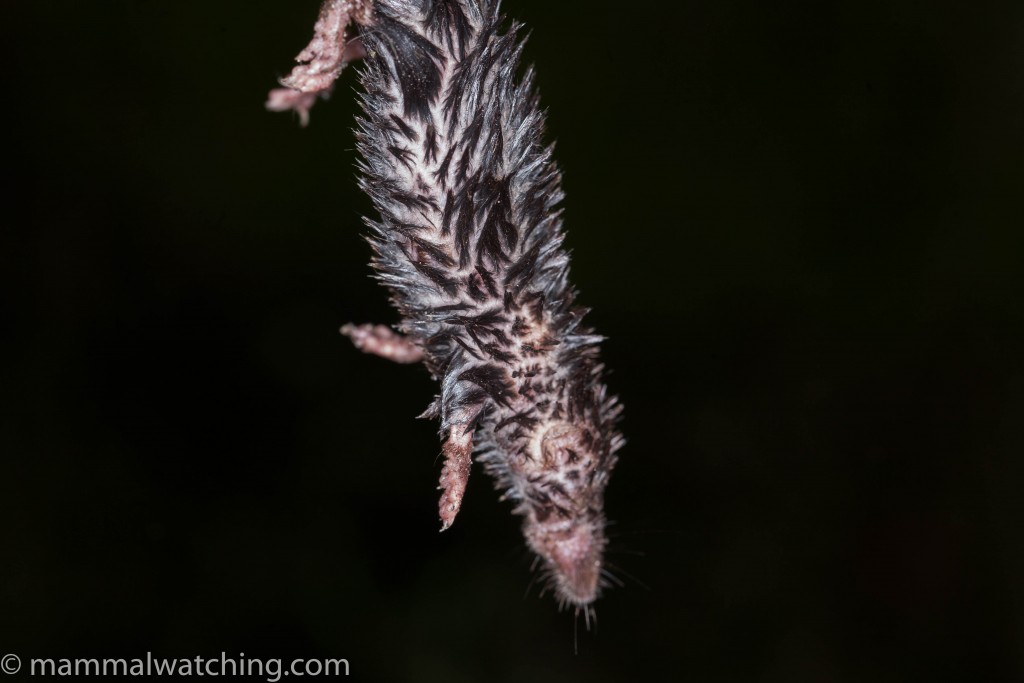 He had set 15 pitfall traps – just plastic water bottles with the necks cut off – before I arrived in areas good for the animals I most wanted to see: Transcaucasian Water Shrew, Radde’s Shrew and Major’s Pine Vole; all specialities from the Caucasus. I also asked if we could try to capture the more widespread Bicoloured and Lesser White-toothed Shrews, which are also present. And so he set traps in two locations. The forest near to the hotel ought to be good for the Water Shrew, Radde’s Shrew and Pine Vole. While an area of grassland, half an hour’s drive away, was better for the white-toothed shrew species, though numbers were low this year.

We stayed at the very comfortable and friendly Wald Hotel right next to the park HQ. 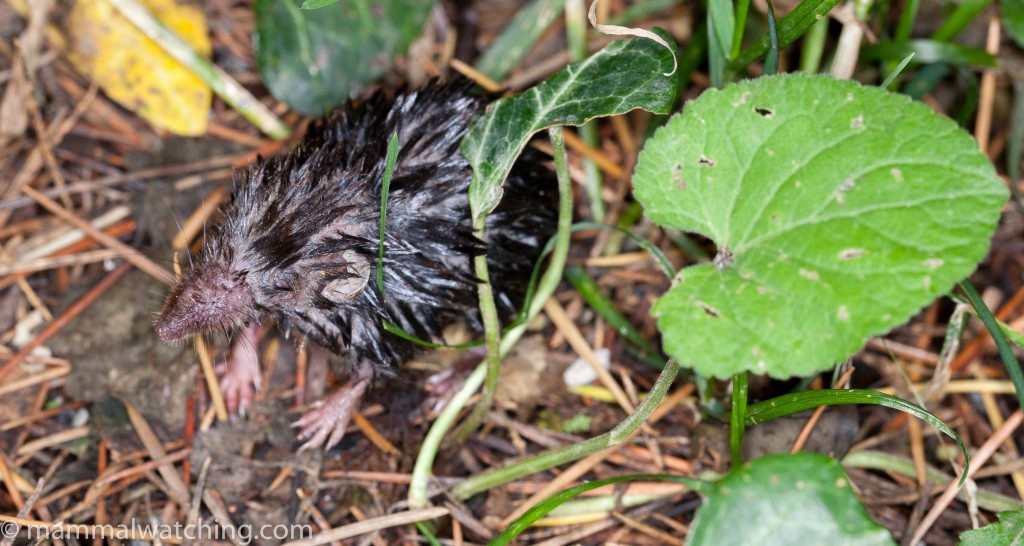 The weather was wet and unseasonably cool during our three nights there. The pitfall traps in the forest worked well and we caught Radde’s Shrews, and several Transcaucasian Water Shrews plus a couple of Major’s Pine Voles in a bottle set next to a little creek. Traps really need to be checked every 3 – 4 hours to prevent fatalities. 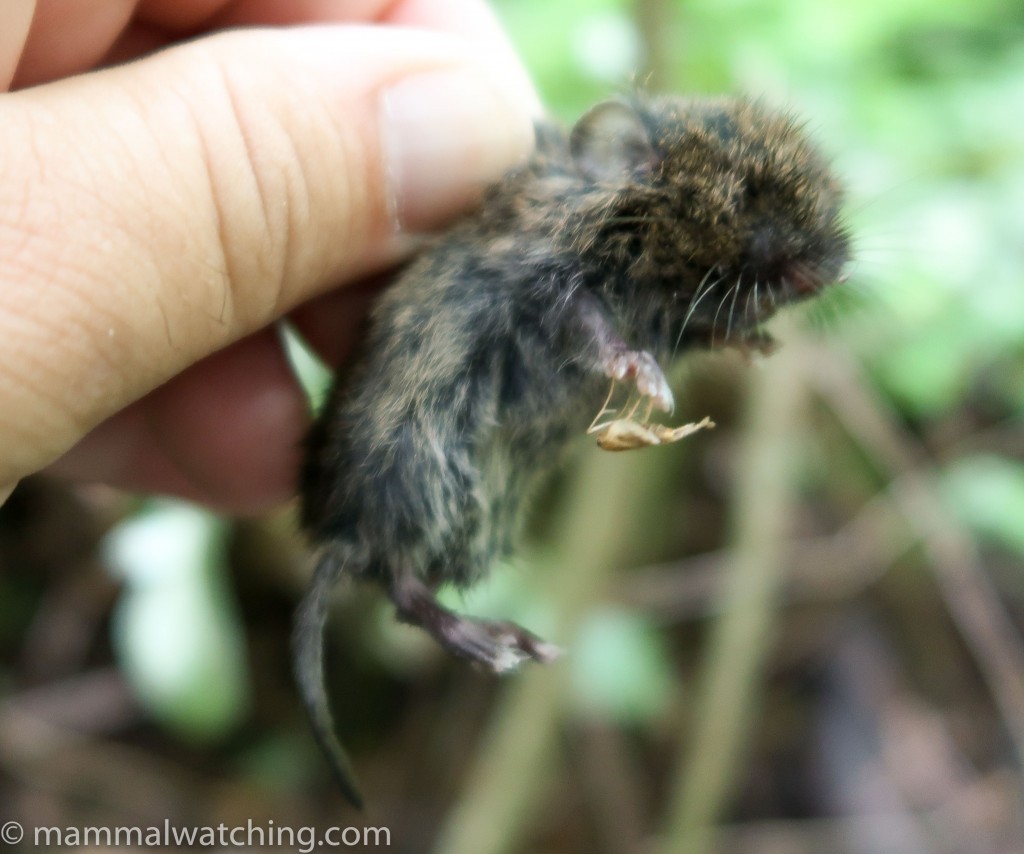 I made little effort to look for other mammals. A short spotlighting walk in the rain on my last night produced an Edible Dormouse but that was the only mammal I saw.

Lagodekhi also has a decent population of Eastern Turs, though they live high up the mountain and seeing them requires a two or three day expedition on horseback: it takes a day to trek up to the right area on horses from the park HQ.  Bogdan said such expeditions are quite straightforward to arrange and when I return to Georgia I plan to spend a weekend up here. 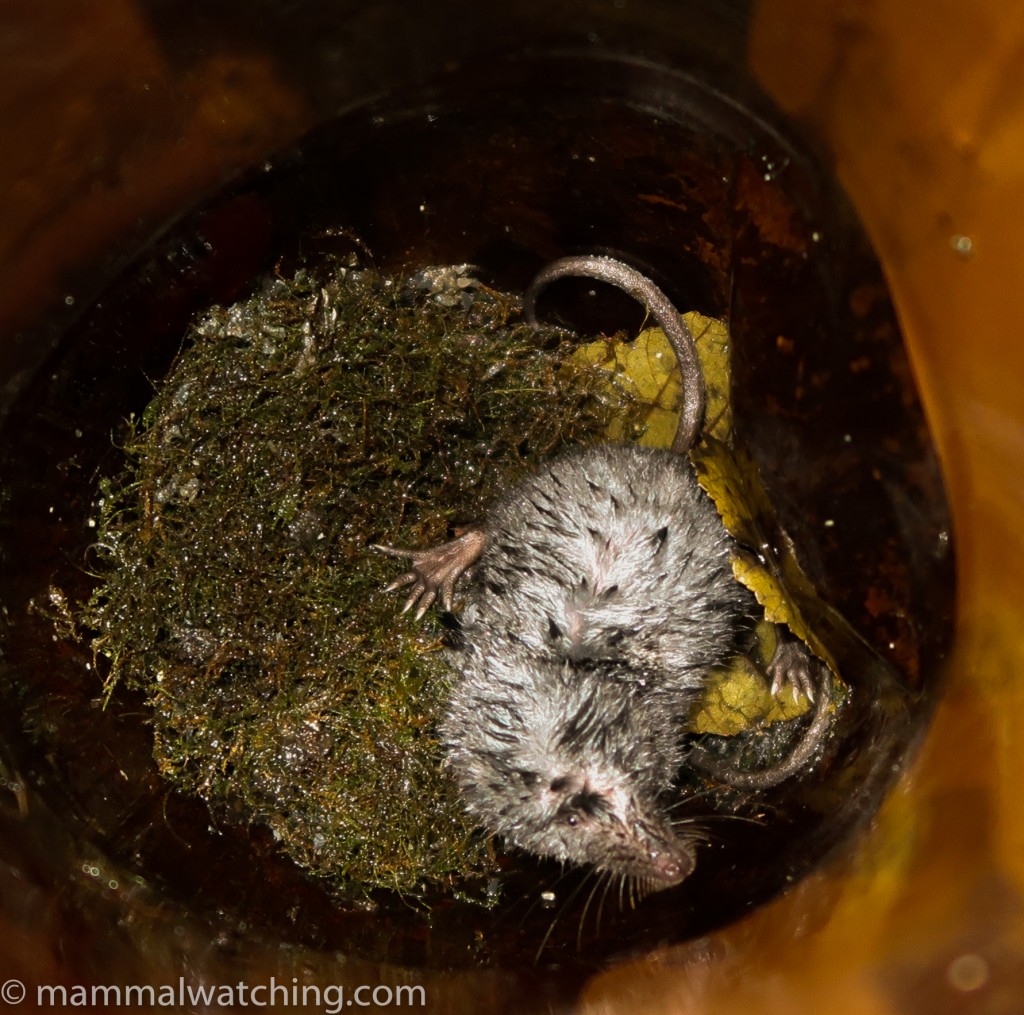 A big thanks to Bogdan, Shota and the several people who gave me advice before I visited. Georgia is indeed a special place and deserves more time than I could give it on this trip.