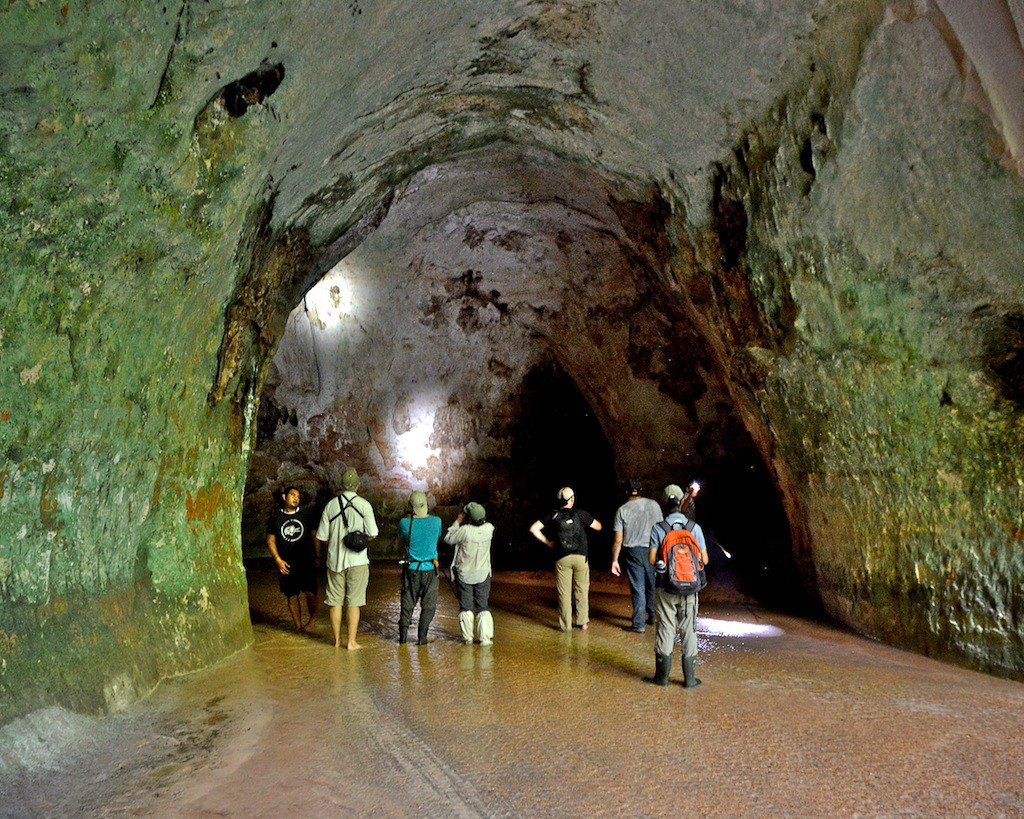 In late June 2017 I stepped off the wonderful M.V Dorinha in Manaus after our 2 week Amazon mega cruise with another four days left before I flew back to New York.

Amber and I had originally planned to take a ferry up the Solimoes River for seven hours with Micah Reigner and Jose Gabriel Martinez to look for Black Uakaris near Codajas. But our Black Uakari success on the last day of our river trip meant a change of plans. 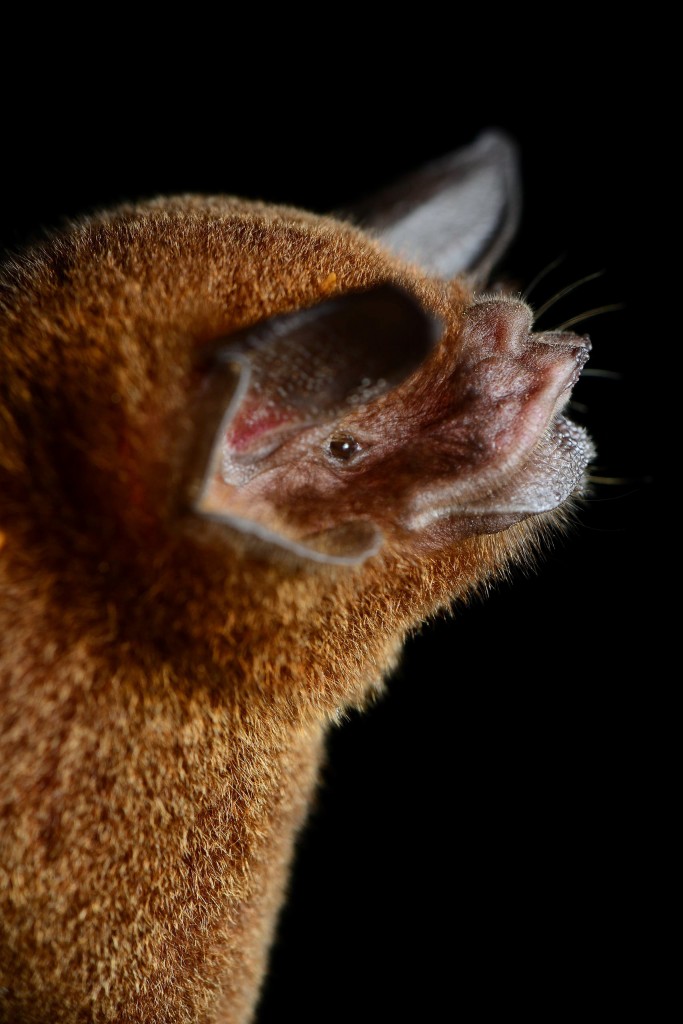 An hour after getting off the boat about half of the Dorinha group got on a minbus to visit a nature reserve near the city of Presidente Figueiredo, about 3 hours’ from Manaus. Cocks of the Rock are the usual draw here, but of course the real reason to visit are the bats. Cocks of the Rock nest in caves: and where there are caves there are (probably) bats….

We also heard rumours of various monkeys in the forest including Golden-handed Tamarins and spider monkeys (Guyanan a.k.a Black Spider Monkey presumably), none of which we saw. 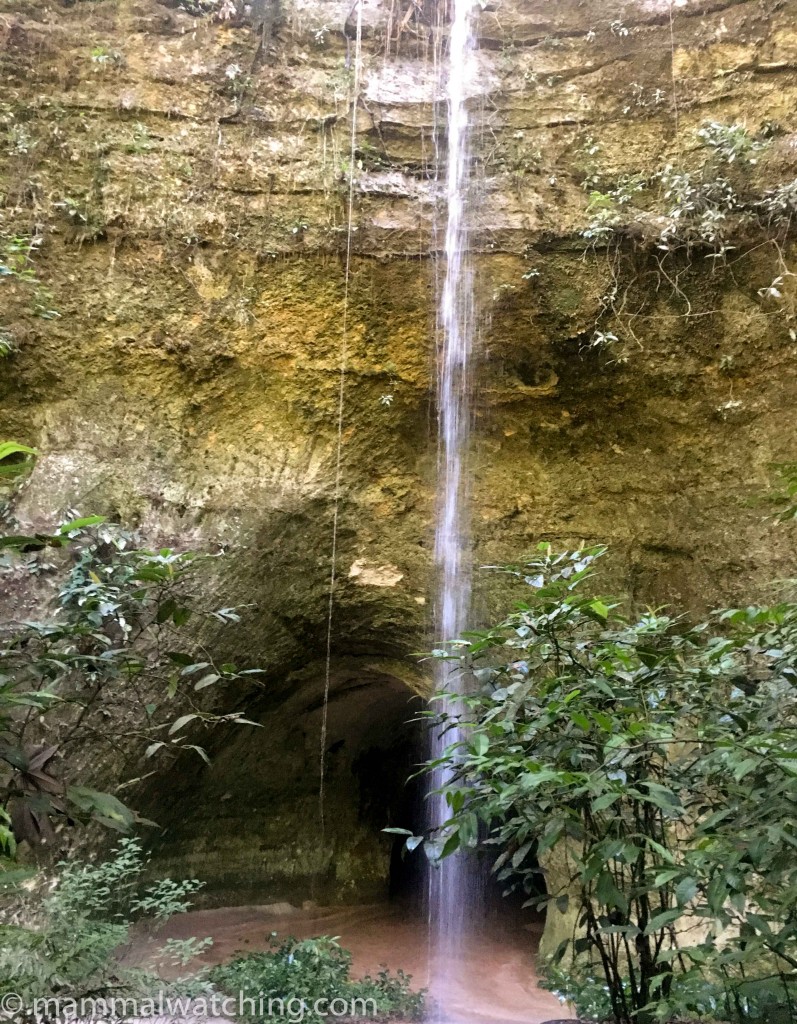 We picked up a local guide. I am not sure what he was supposed to do, but I am pretty sure he didn’t do it. We followed the main trail for about half an hour to a large cave behind a waterfall. 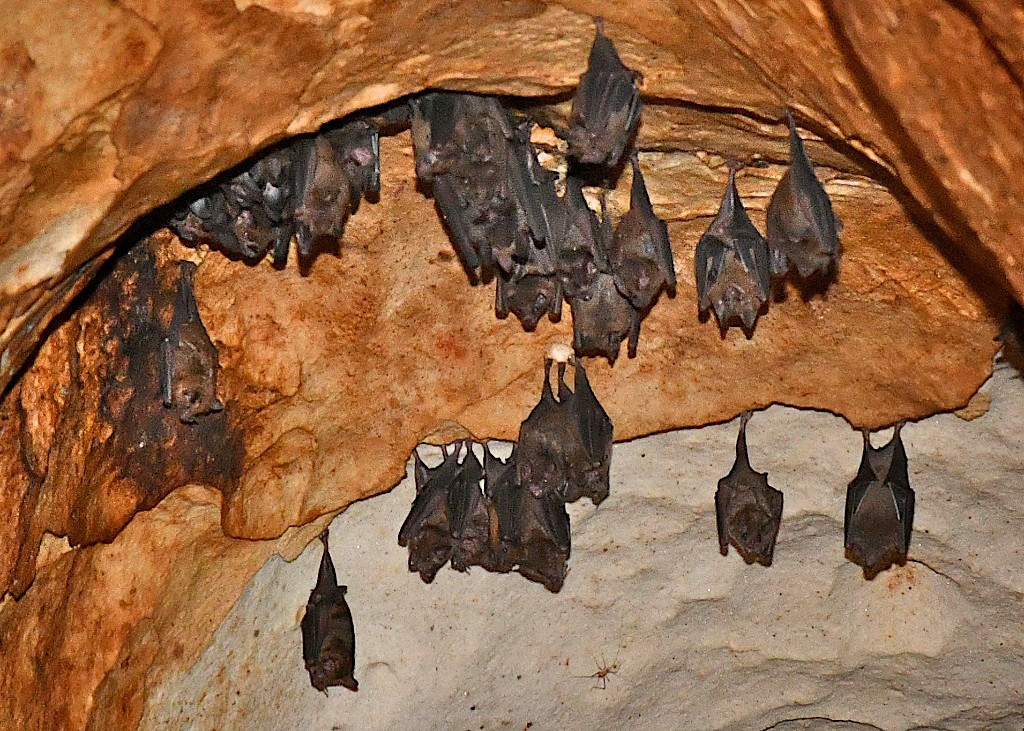 It contained several species. A bunch of Greater Spear-nosed Bats were an important milestone for both Charles Hood, his 700th mammal, and Judy Parish, her 500th.  Meanwhile Phil Telfer got dangerously close to his 1000th. 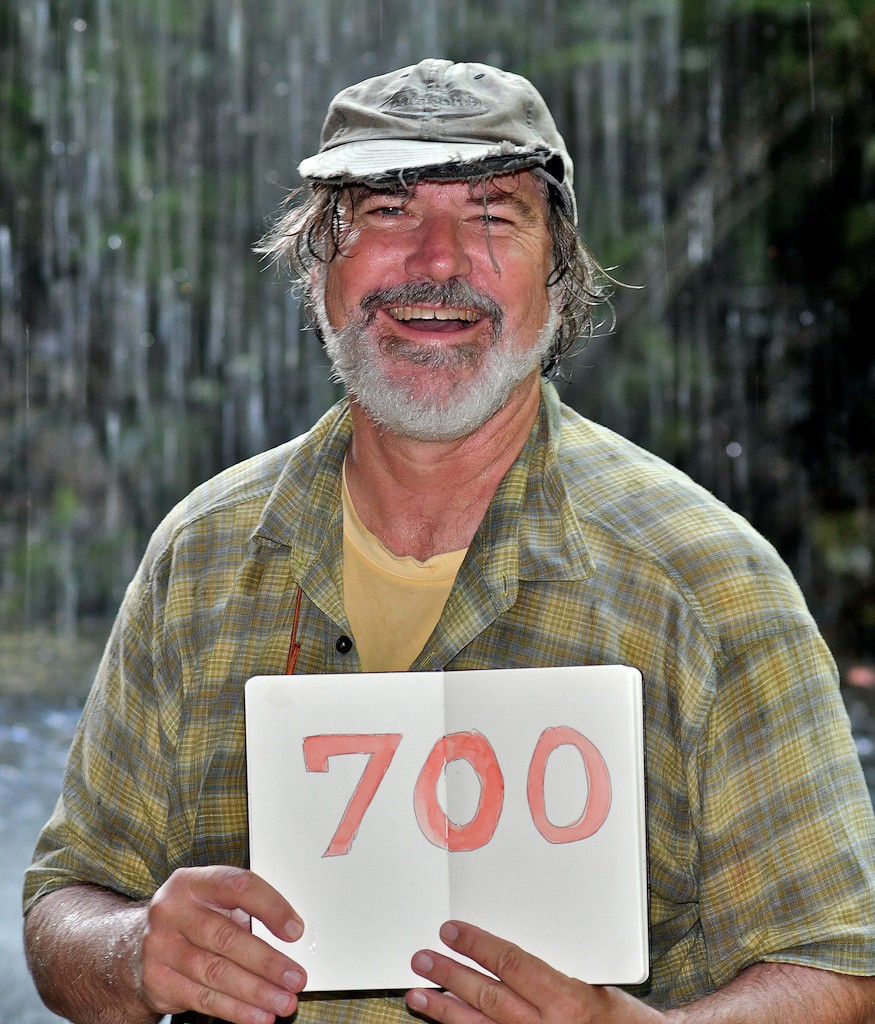 The cave also had some Rusty Moustached Bats, Pteronotus rubiginosus and Lesser Dog-like Bats, Peropteryx macrotis that Jose Gabriel and Marcelo were able to catch. 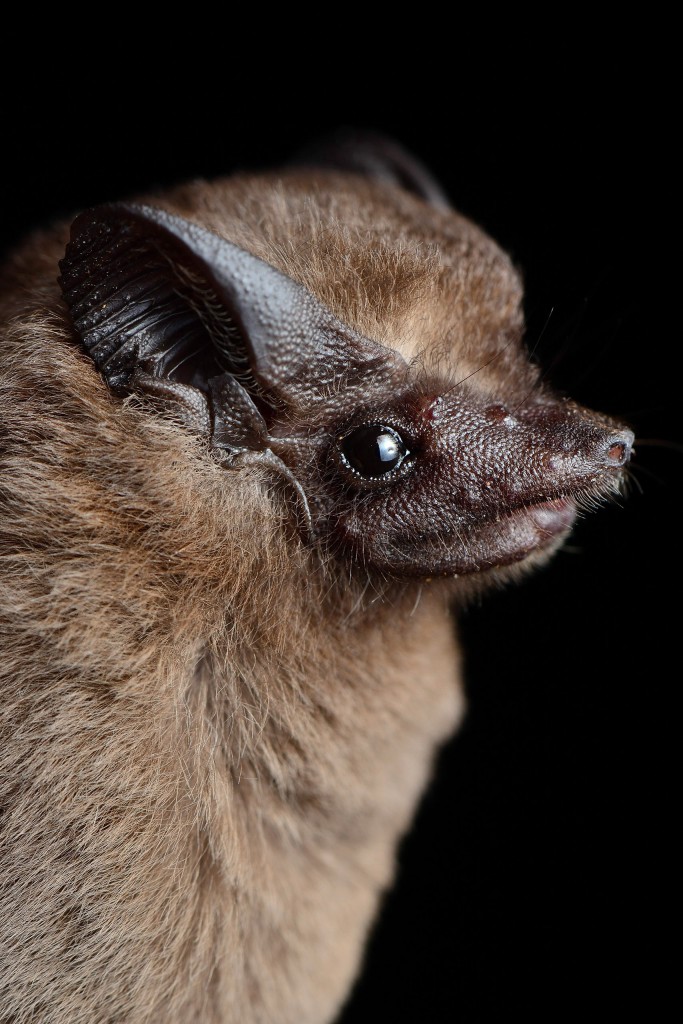 We carried on past the waterfall cave towards the Cock of the Rock lekking site. While most of the group went to look at the birds (disappointing I know!), Jose Gabriel, Marcelo and I kept on searching for bats.

In some small caves, near to where the birds were lekking, we saw a few Common Vampire Bats. Jose and Marcelo managed to net a tiny myotis from out of a high weephole in the ceiling.  A Silver-haired Myotis, Myotis albescens: a lifer for all of us other than Marcelo. 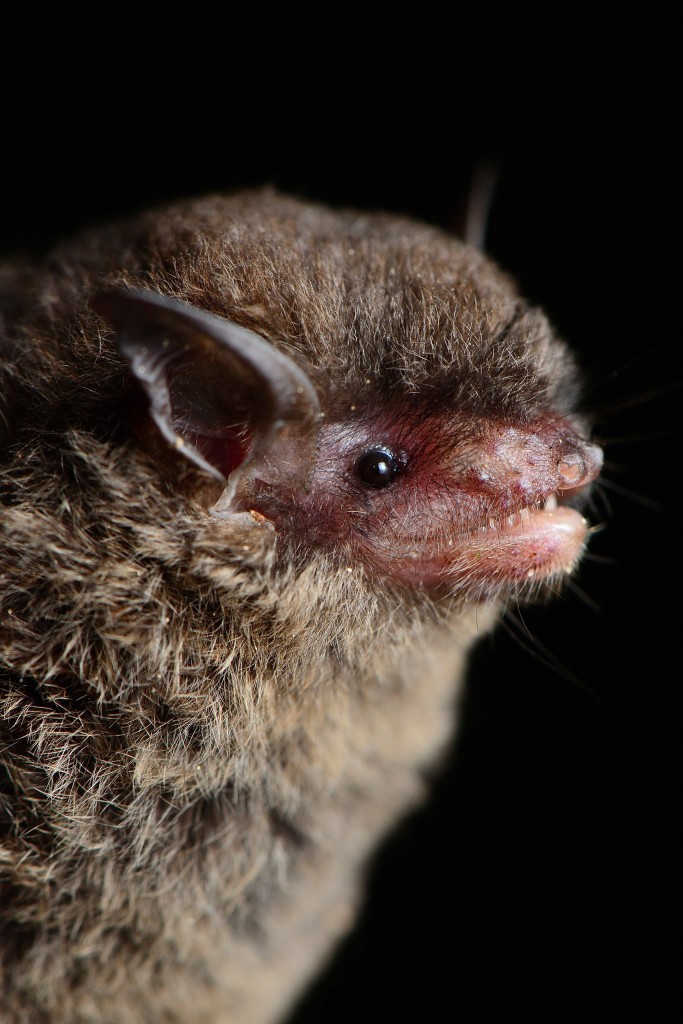 A Cock of the Rock put in an appearance. It didn’t distract us for long.

After lunch we visisted another cliff/cave area on a beach by the river (about 15 minutes along a trail that leaves from town).

There were lots of myotis here, some of which we caught, but all of which we decided were more Silver-haired Myotis. 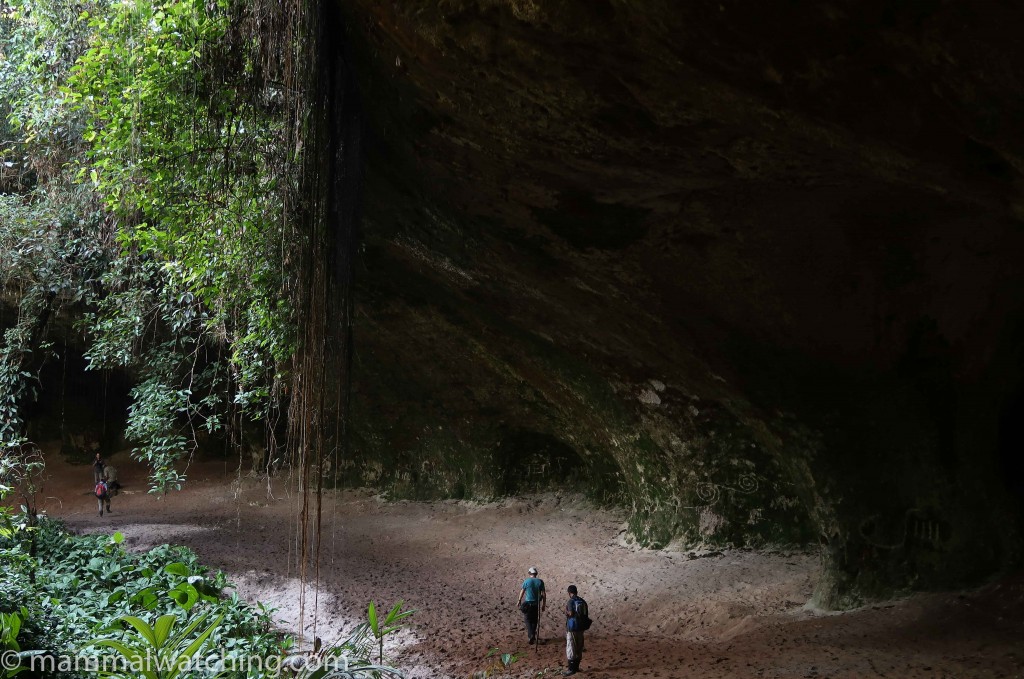 Back in Manaus we said goodbye to a bunch of people who were heading home. 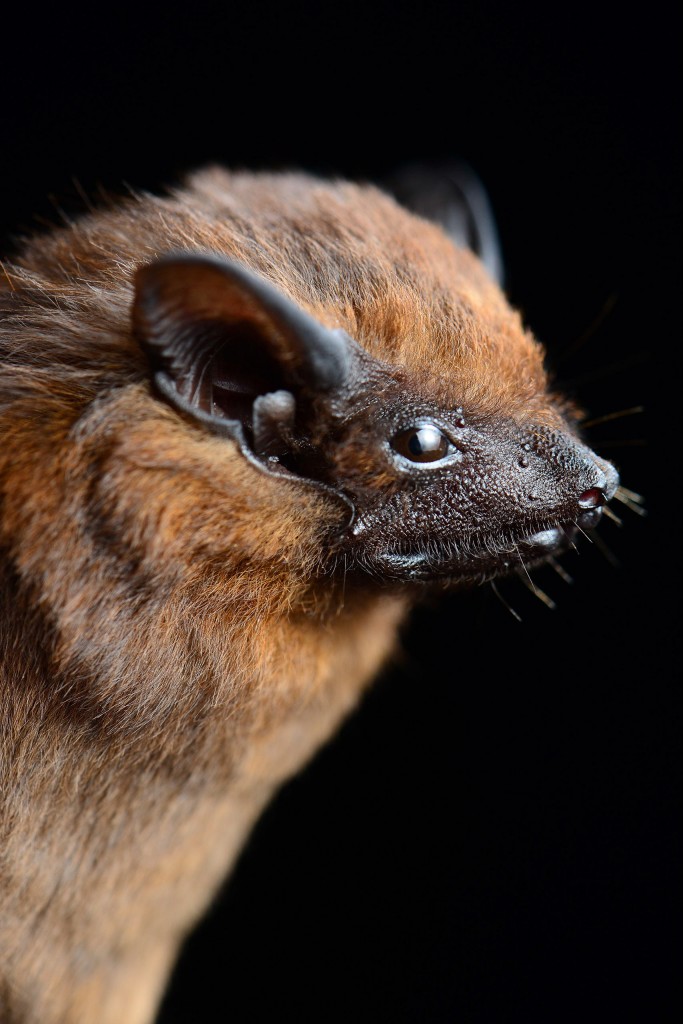 Amber and I, along with Jose Gabriel and Micah, spent the following two nights at Novo Airão.

The Dorinha’s captain, Junior, has a hotel in this little town, which is a three hour drive from Manaus on the west bank of the Rio Negro. The hotel used to be called “Hotel Tarantula” on account of the very many tarantulas living there (something I can attest to). Strangely this was not the best marketing ploy … and the place is now called the Amazonia Park Suites.  If you want to stay there it is probably easiest to talk to Junior. 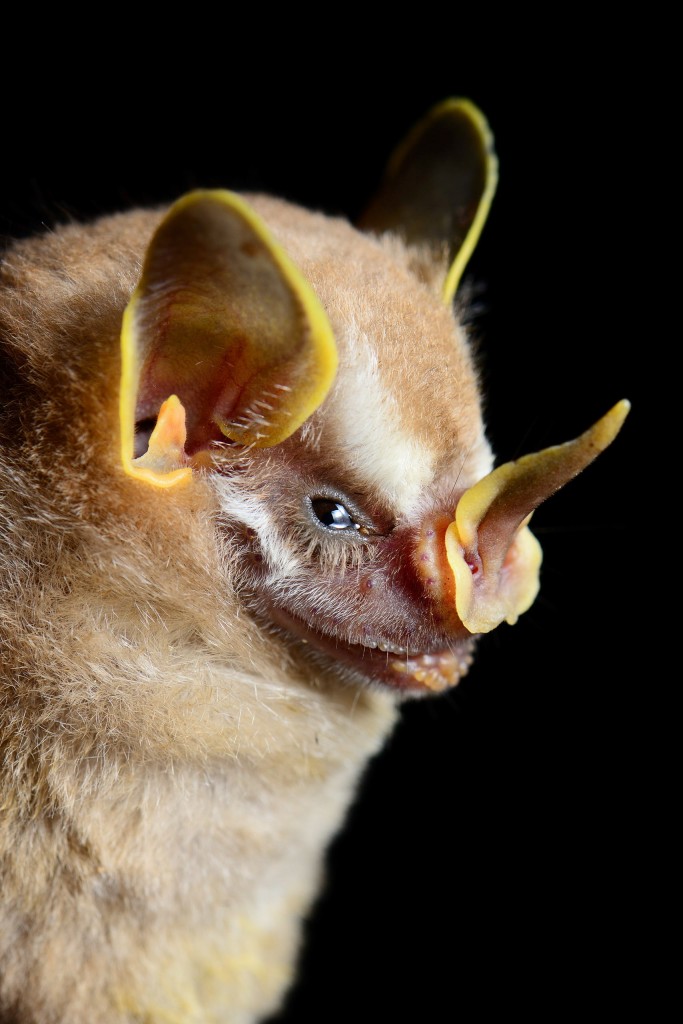 It was a pleasant base for the next two nights.  There are resident Noisy (Spix’s) Night Monkeys in the gardens, great food, nice rooms, a pool and a shitload of tarantulas. Junior arranged for a local forestry guy, Salim, to show us around. 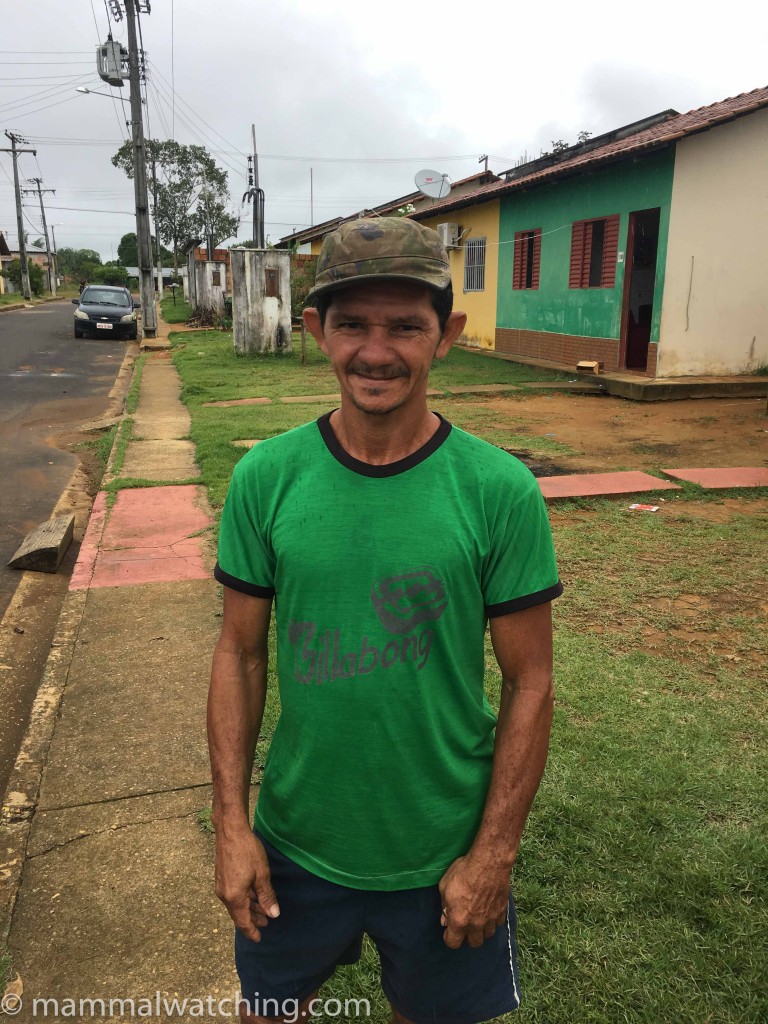 Salim’s a good guy to have around. One of those quiet people who probably knows everything about the forest even if he doesn’t always think to let you know.

Our main focus here was bats, and Jose Gabriel organised us as we put up several nets both nights we were there. On the first night we set nets within a hundred metres or so of the hotel. 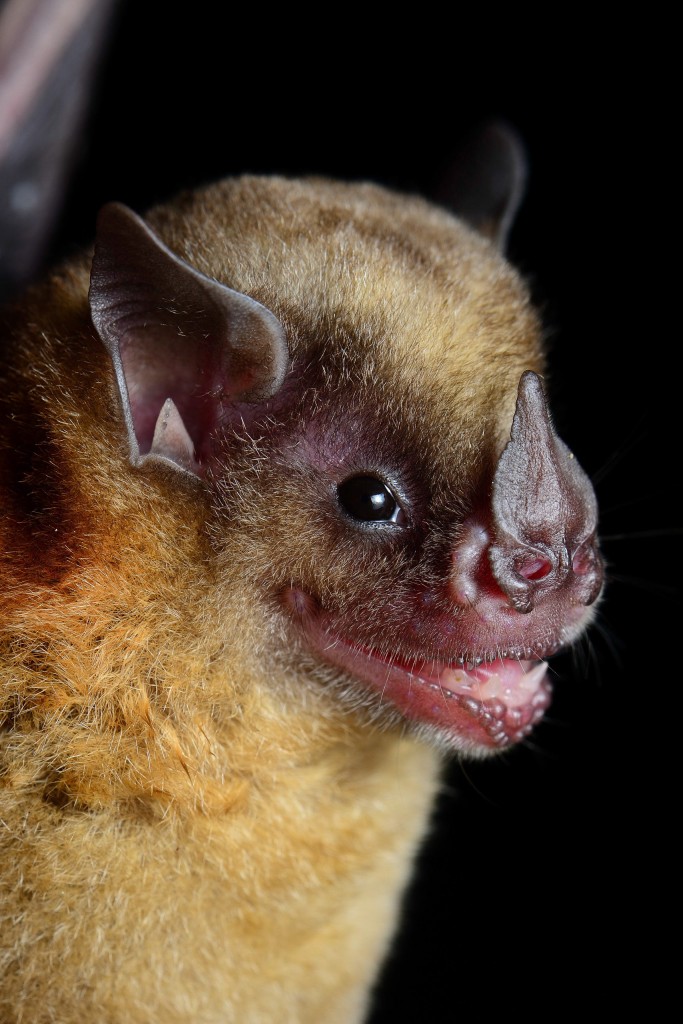 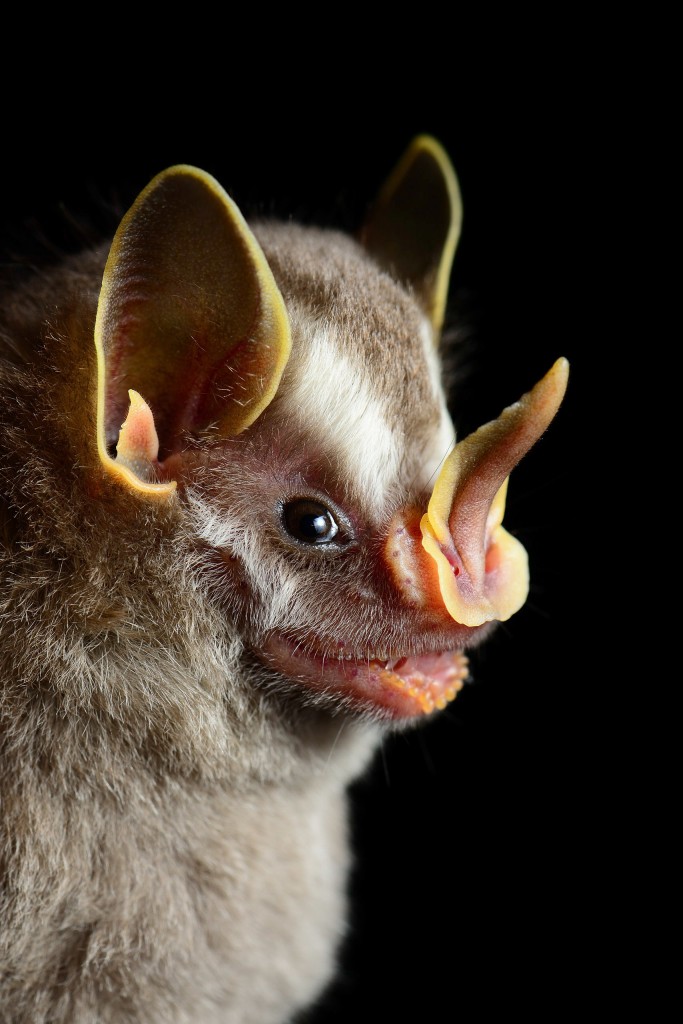 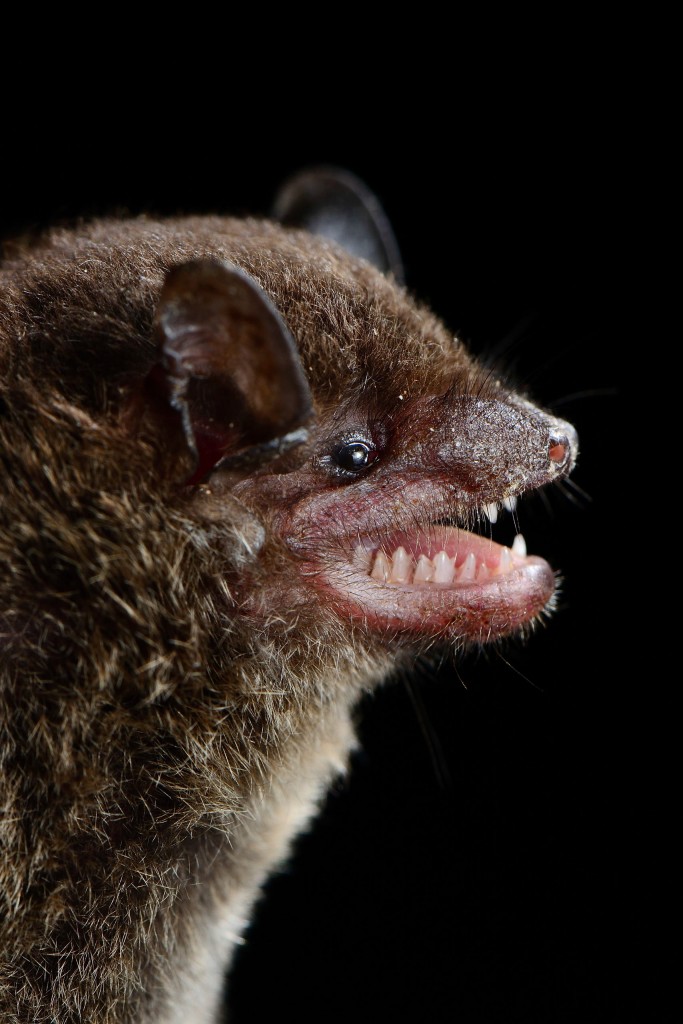 On our second night rain we set nets in some taller forest a few kilometres back down the road towards Manaus. It started raining pretty early which is perhaps why the batting wasn’t so good. But we caught more Great, Andersen’s, Dwarf and Brown Fruit-eating Bats. 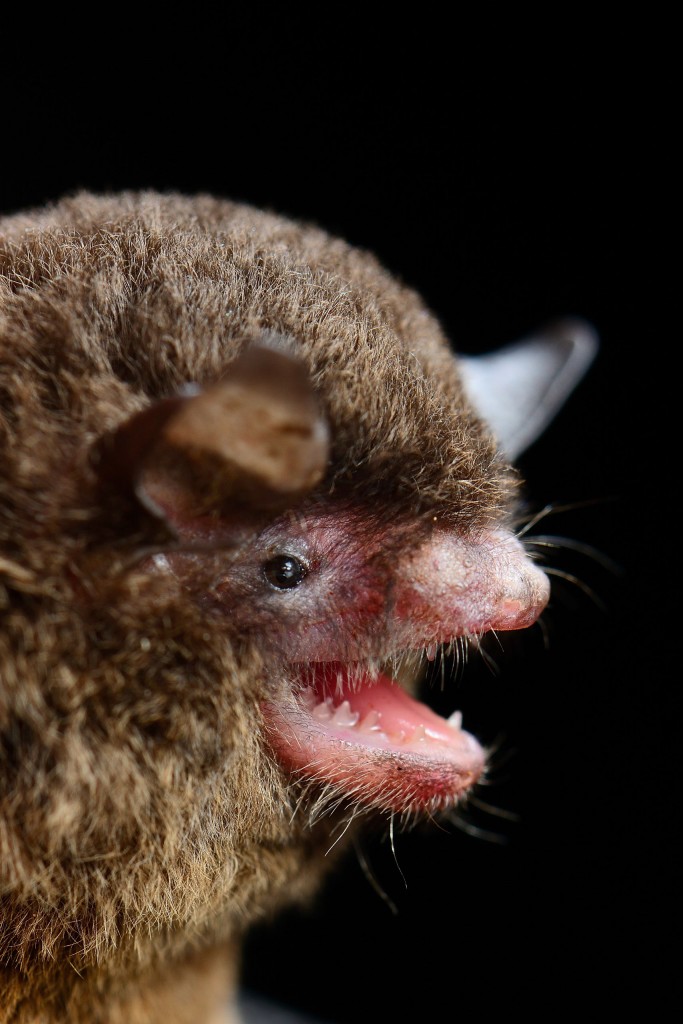 We also, of course, captured many of the ubiquitous Seba’s Short-tailed Bats as well as the first Tilda’s Yellow-shouldered Bat, Sturnira tildae of the trip: a species I had seen once before in Guyana. 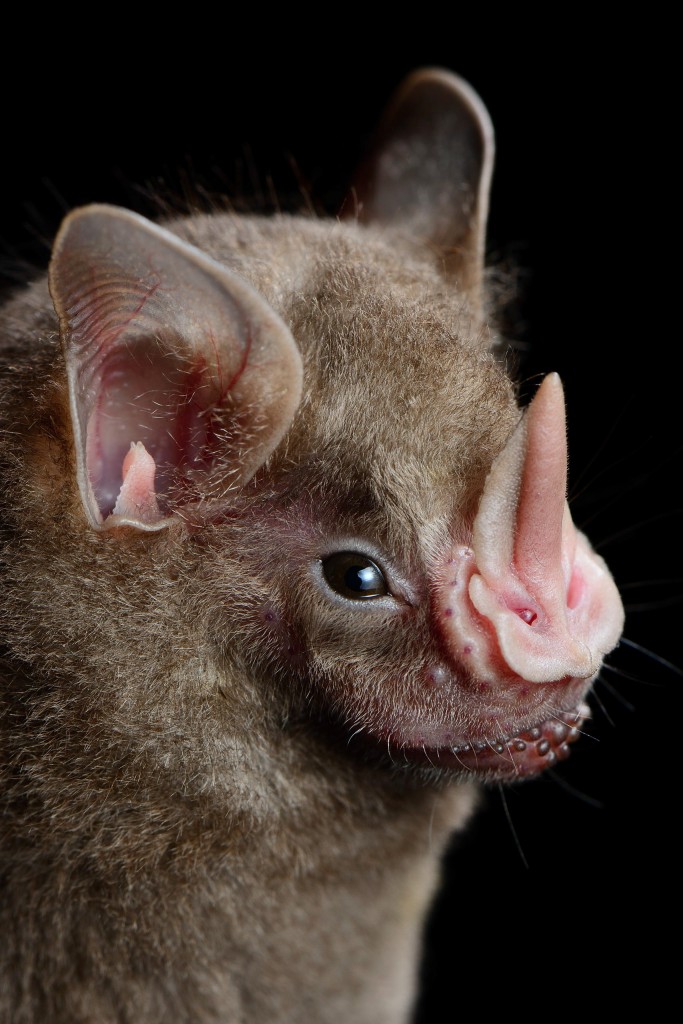 The rain was getting heavy by 10 p.m. and Jose was able to finally get some sleep, after batting til 4 a.m. the night before. 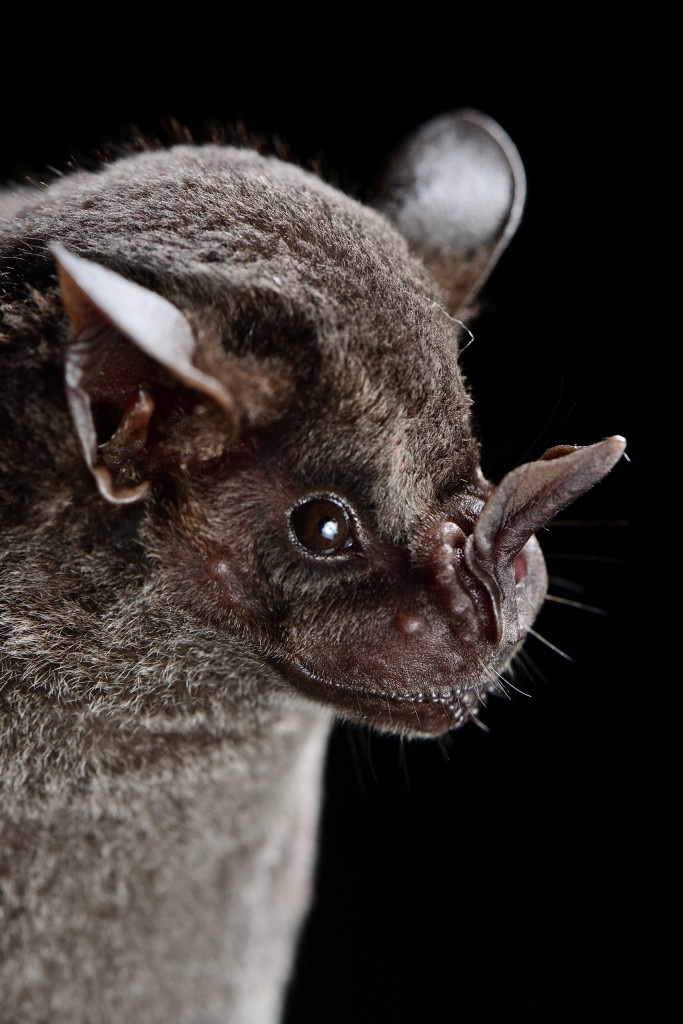 Mist netting aside, we looked for mammals during the day.

A buddy of Salim’s had seen a Bush Dog a couple of days earlier. Yes. A Bush Dog! Currently my most wanted mammal in South America. They seems about as rare in this area as everywhere else: this guy reckoned he saw once once every 6 months and he is in the forest every day. But this was a better chance than I’d ever had so Salim, and his friend, took us along the trail where he’d seen the animal (about 30km back along the road towards Manaus).

We saw a Brown-throated Three-toed Sloth as we were driving along the road, and Micah saw some rare parrots that got him excited in the forest. I can find out if anyone cares…

But no Bush Dogs sadly.

We did however visit a large fallen tree which Salim knew contained bats. The bats were deep inside and apparently one of the micronycteris species. They were also almost impossible to catch, about 10 metres inside the trunk which anything bigger than a Coati was going to have problems getting inside.

But we had a secret weapon. We had Jose Gabriel. 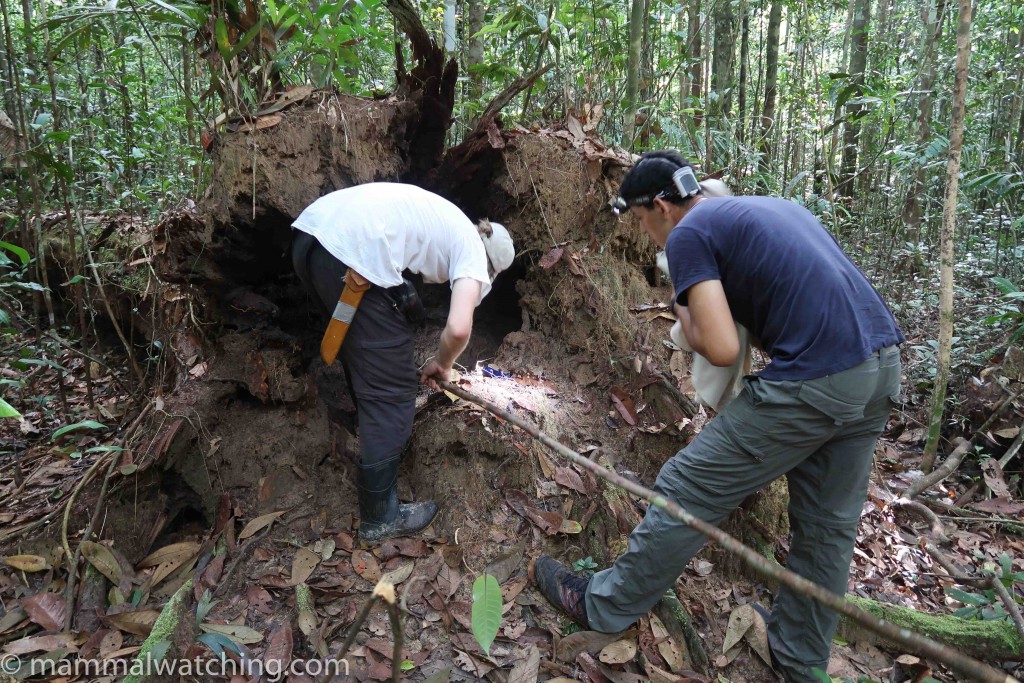 Jose was determined to capture a bat, so he put a net on a very long handle and crawled into the filthy tree. Micah and I took off our tee shirts to try to cover the exit behind me and stop the bats from flying out. Now trying to capture a tiny bat in a net at the end of a 5 metre stick, inside a tree, is not easy. The bats were spooked and start flying up and down the tree, unable to escape but pretty much unnettable.

The tension grew until, with a cry of triumph, Jose Gabriel emerged from the tree clutching a bat. In what must be one of his greatest captures yet he had grabbed the animal – in flight and in the dark! – as it buzzed past his head. Someday all biologists will be built this way! 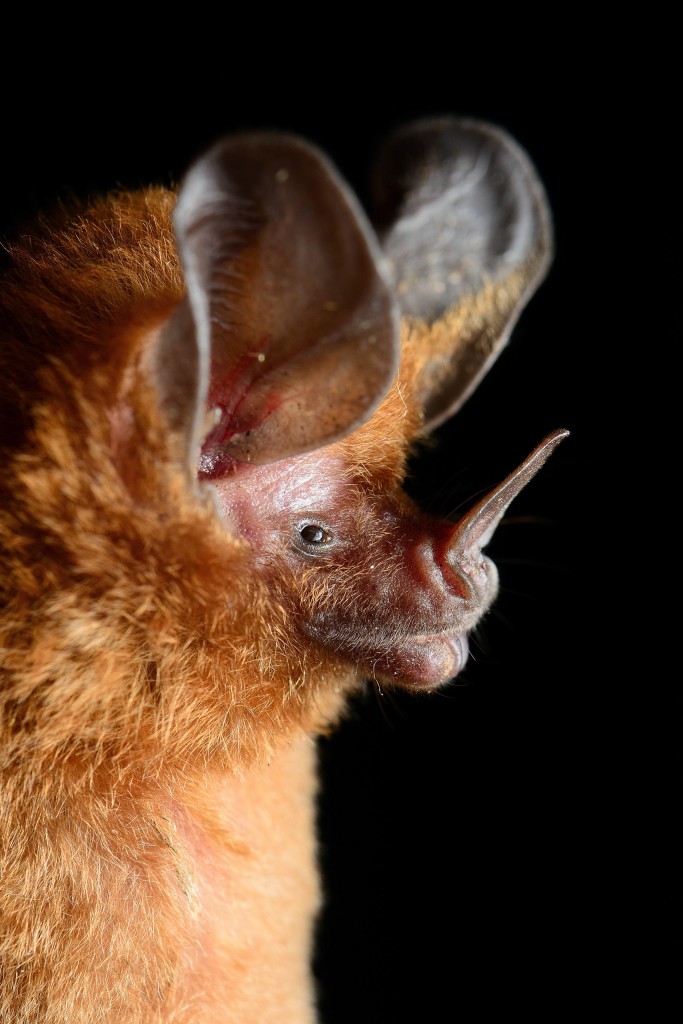 The bats were Little Big-eared Bats, Micronycteris megalotis, a lifer for both Jose Gabriel and me. Though I think I got even more enjoyment from watching him capture one than from seeing the bat itself.

On our first night, while Jose Gabriel was manning the nets Micah and I spotlit along a track through some tall forest (drive back towards Manaus for 5 km or so and take a right). It was pretty quiet until we spotted a Bare-tailed Woolly Opossum, its ears glowing bright violet in the spotlight. 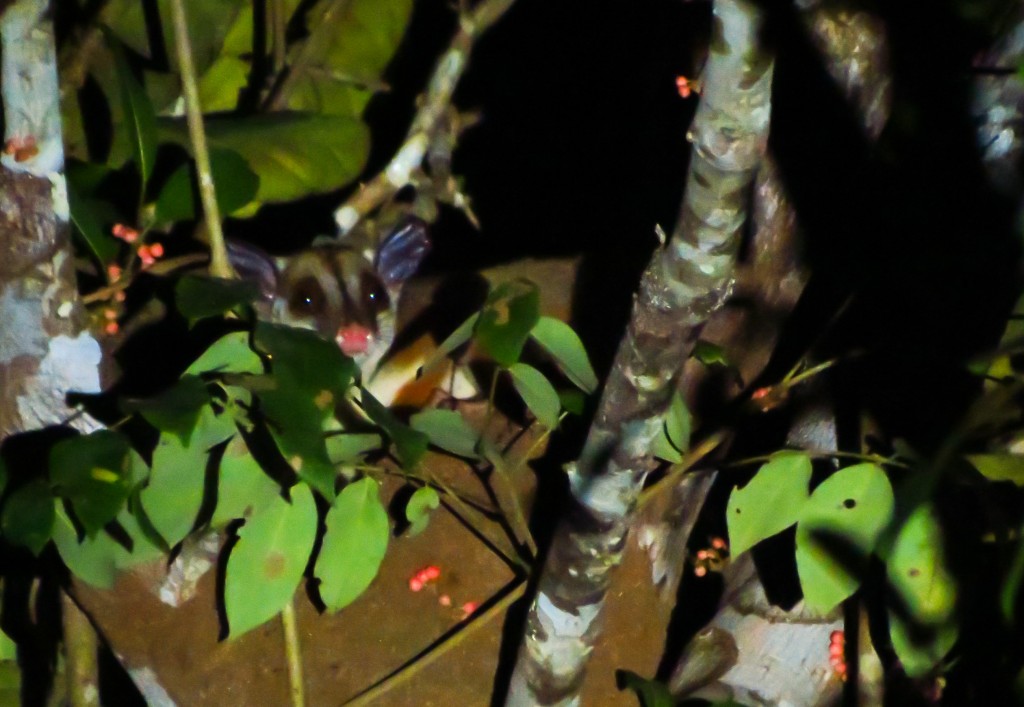 On our last morning we took a quick look at the Spix’s (Noisy) Night Monkeys in their roost tree behind the hotel and headed back to Manaus. A big thank you to Micah and Jose Gabriel (and for his all his excellent pictures): two very good guys to travel with. 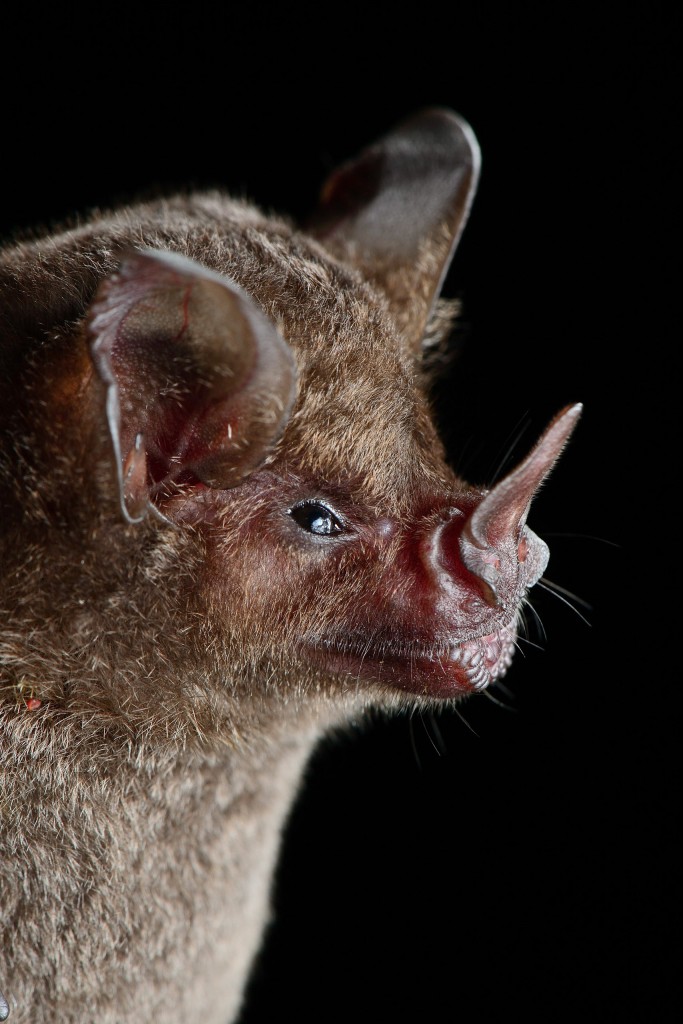 A fun way to end the trip and well worth an add on if you are interested in bats. We saw 21 species in three days, of which – somewhat surprisingly – 12 were new for the trip and five new for me, taking my list of lifers from the previous 17 days to 52.  More than I expect to see in a year! 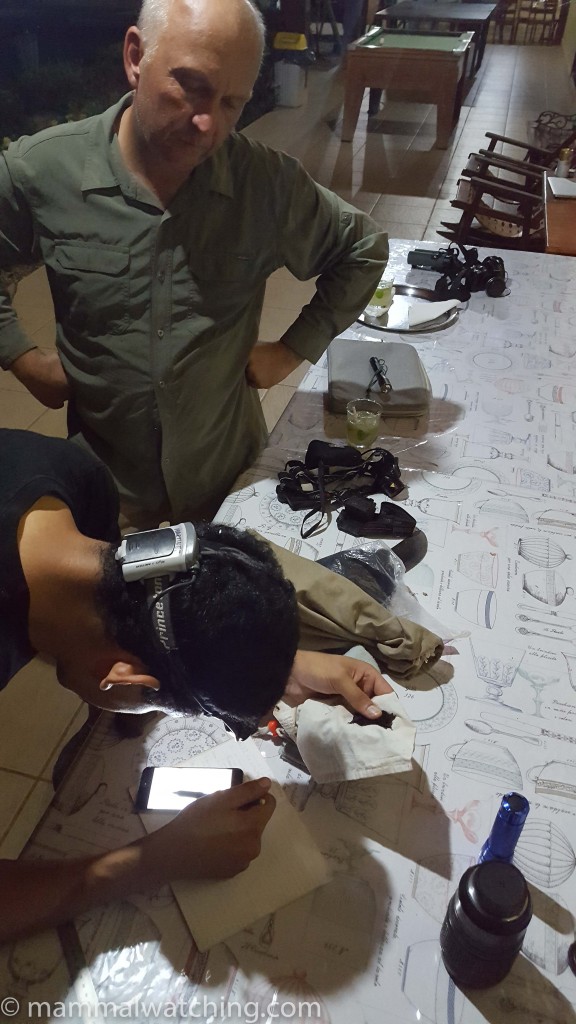 Jose and me trying to find another lifer. 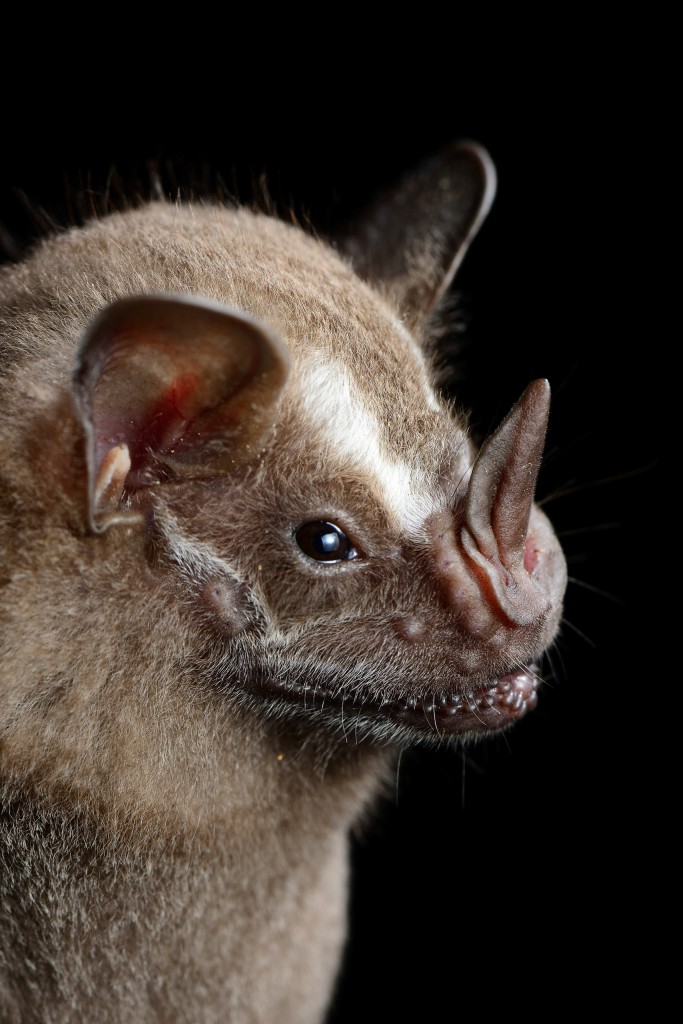