My family will be staying in Ventura this Thanksgiving and I probably can’t swing an overnighter on Santa Cruz Island, but I was wondering if a day trip would be worth it if Island Foxes are my main goal? Also, is one of the ports better than the other for foxes (or skunks, for future reference)?. Any other decent mammal spots around Ventura? I know Carrizo Plains is a 3-hour drive away. Would that be a worthwhile day trip if I arrive around dawn? Where in Carrizo Plains should one go if their main target is carnivores, pronghorn, and antelope squirrels?

On 2 recent trips to Point Reyes, I’ve seen Gray fox in the same location both times. I’ll probably try a third time this weekend to see if I can find it again. Anyone interested in the location can PM me, since I don’t want to disturb it too much if there’s a den around. Both times it was out a few hours after dawn and was pretty tolerant of me following it around for about 40 min: 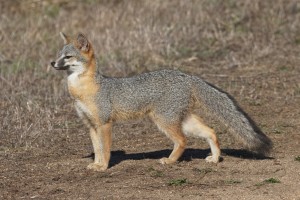 Other sightings included a bobcat (with perhaps a woodrat in its mouth) along L Ranch road, around 9 coyotes, the usual tule elk and deer, and Botta’s Pocket Gopher. I left in the afternoon both days.

Lake Tahoe: There were plenty of Douglas Squirrels and varied chipmunks around fallen leaf lake. A large Black Bear with a recently hurt paw (missing at least 2 fingers, from an incident with a dumpster, according to some others I met along the path) was catching salmon in Taylor Creek: 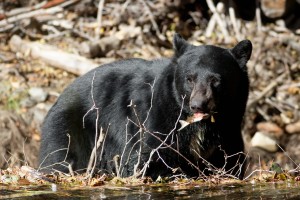