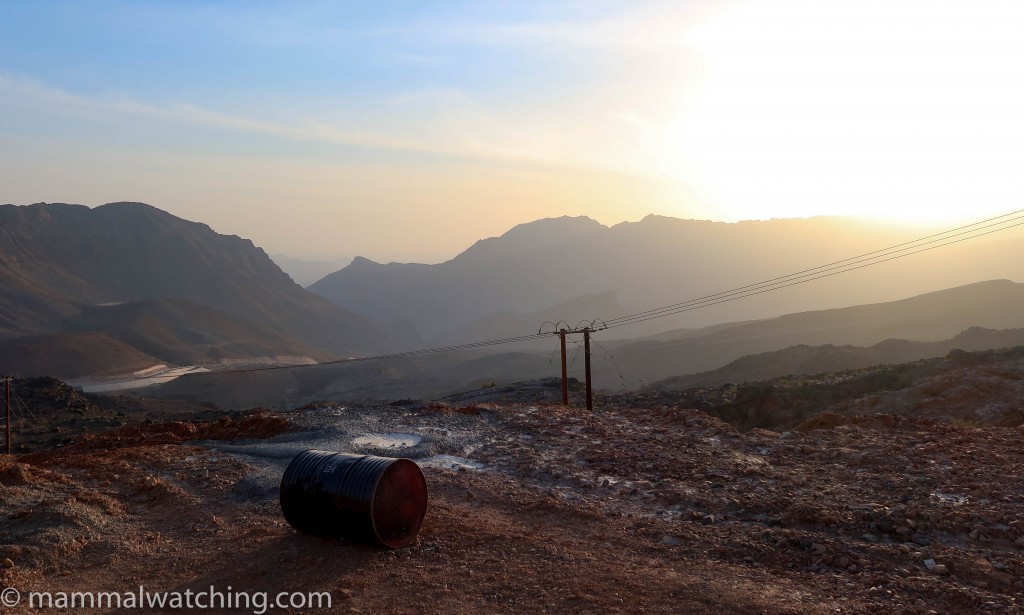 In mid February 2018 I was packing my bags for a work trip to Dubai when I got an excited email from Dominique Brugiere: after nearly two weeks looking in Oman he had just seen a Blanford’s Fox.

A few days later I was in Oman, following in Dominique’s footsteps on a 24 hour fox twitch.

Oman – as Dominque said – seems like a beautiful country. And while Dubai is full of glitz and glamour, most things in Oman seem understated, other than the mountains which dominate everywhere.

Just 20 minutes after leaving the airport I realised this was a country I wanted to return to. I drove the 90 minutes to the small town of Birkat Al Mouz, just west of Izki. Oman might also be the best signposted country on the planet. From Birkat Al Mouz it is easy to follow the signs to Jebel Akhdar and Wadi Al Muaydin. A couple of kilometres up the road, a dirt road – again well signposted – leads off to the left and into Wadi Al Muaydin. Dominique saw his fox along here.

You can also continue on towards Jebel Akhdar, though you will need a 4WD to get through the police checkpoint a mile or so up the road. The steep drive up the mountain, along a perfect highway, doesn’t seem to need a 4WD but those are the rules it seems. 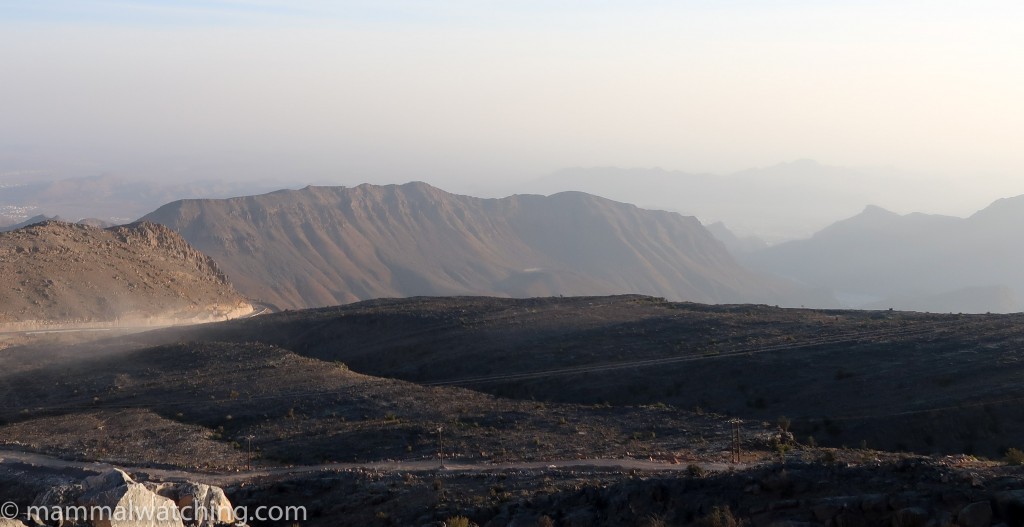 Back in the wadi I drove the dirt road to make sure I could find the spot where Dominique saw the fox. After considerable correspondence with him, we are pretty sure the animal was on the cliffs on the west side of the road almost exactly 2.5 km from the start of the dirt road. 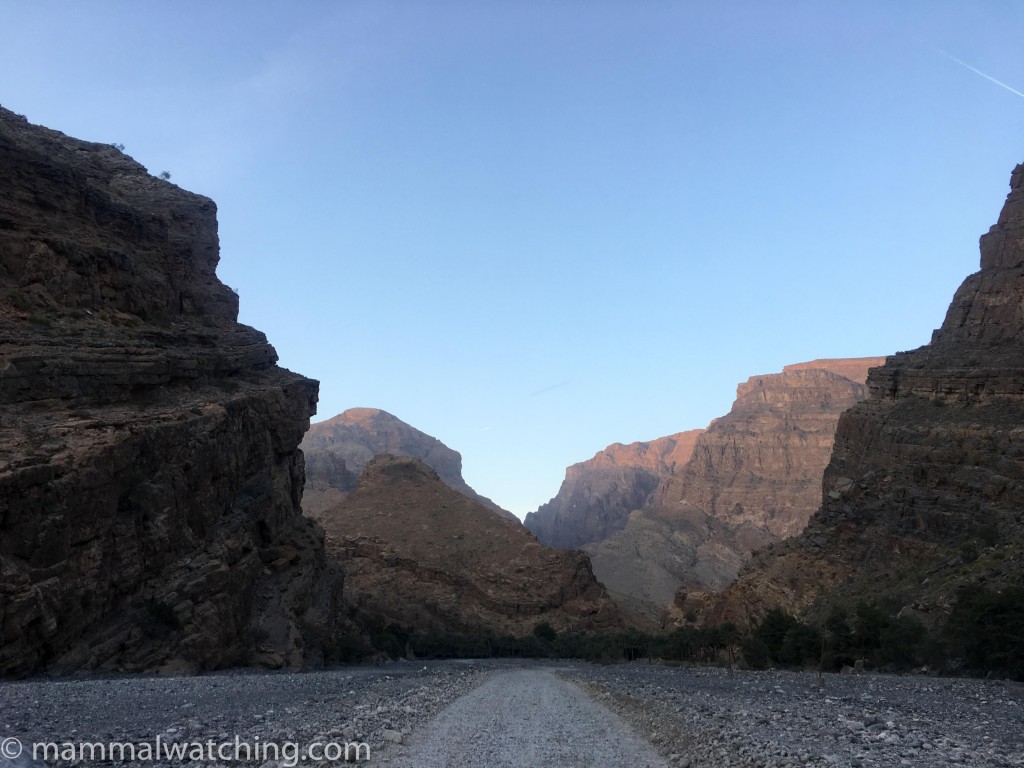 It is worth checking out any small caves in the gorge. The first cave I checked contained a mouse-tailed bat which I think must have been a Small Mouse-tailed Bat, Rhinopoma muscatellum, and a lifer for me. 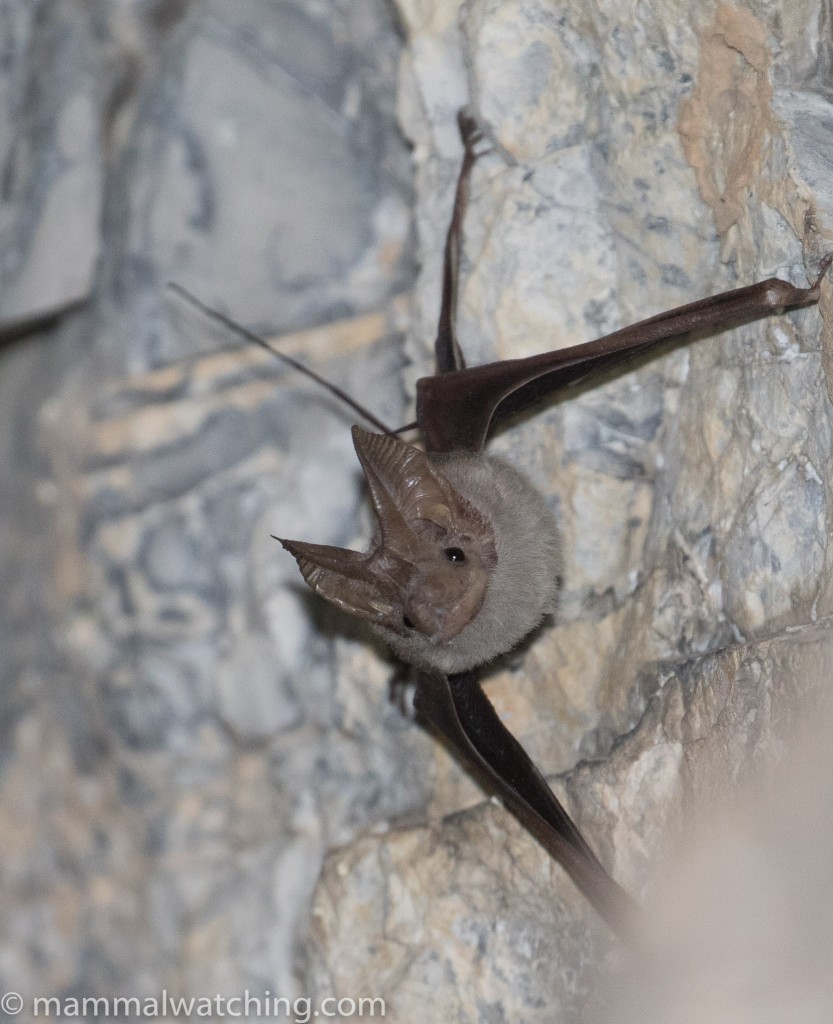 After dark I spotlit, mainly from my car, through the wadi, focussing on the stretch of road 2-3km from the start: the cliff face here is a little less steep and seemed to provide better habitat for a Blanford’s Fox.

The road was surprisingly busy, with vehicles travelling along it every 15 minutes or less. I didn’t drive to the very end but after about 5km it reaches an oasis and some farms.

I didn’t see any sign of life until after 8pm, at which point some eyeshine raised my pulse rate: there was a fox in the base of the wadi, apparently sniffing around a spot where I had seen a large group having a picnic. But when I got a better look at the animal I could see it was a particularly scrawny looking Red Fox.

An hour later I got more eyeshine in the same area, a Red Fox again, but then, high up in the cliffs there was another animal: I got the spotlight and the binoculars on it long enough to see a greyer, shorter-legged and bushier tailed beast: a Blanford’s Fox. But I saw it only for 2 seconds before it climbed over some rocks at almost exactly 2km along the road (on the west side). I got more eyeshine later in the evening in the same area but not when I was close enough to see the animal properly in the light.

I spent the night at a hotel in Nizwa, a 2o minute drive from the wadi.  The Golden Tulip Hotel – only 5 minutes from the wadi I suppose – would have been more convenient, though you could also camp in your car without any problems I imagine. I returned just before dawn but, other than a domestic cat, didn’t see any mammals.

Blandford’s Fox is likely not uncommon in the right habitat but it seems a difficult animal to see: the habitat is often inaccessible because of either the terrain or security concerns. So perhaps Oman where they seem relaxed about spotlighting, is the place to see it. I want to go back to get a better look, especially to see properly the fabulous bushy tail. I read a report (from non wildlife people so I am wary of of its accuracy) that this species wass common in the Musandam Peninsula in the town of Khasab. Worth checking out perhaps…. anybody?

A big thank you to Dominique for doing all the legwork and for his detailed (and frequent) instructions to me. 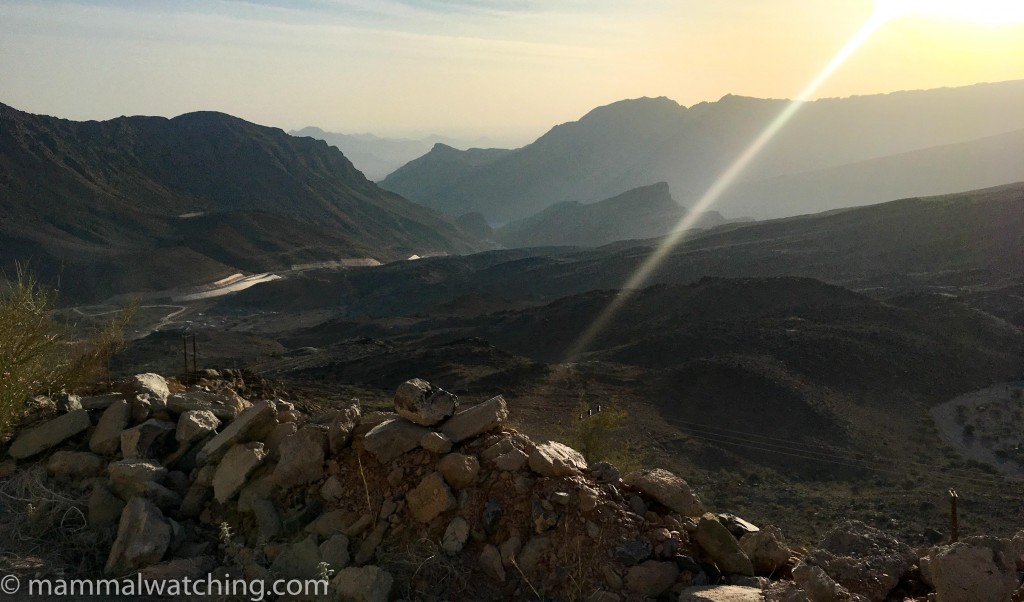