Here’s a short report that Chris Cook of Japan Nature Guides forwarded to me about a night on Mount Takao, on the outskirts of Tokyo, in the middle of April. Chris was kind enough to give me some advice with my Japanese Badger quest while I was in Japan. Takao-San sounds like a good spot, especially if you are in Tokyo and don’t have time to travel further afield.

Soon after 2130 last night I began hiking up to the top of Takao-san. The forecast rain held off, but in its place a strong wind was blowing.

On the way up I did not hear any birds — not really a surprise — but I did have some luck with mammals. I heard a Giant Flying Squirrel, but could not locate it among the thick canopy of leaves.

About 200 metres before Yakuo-in temple, I heard something moving in the dry leaves among the trees below the road. After waiting for a couple of minutes and peering in the gaps between the bushes, I was able to locate a Japanese Badger (Anaguma) scratching about in the dry leaves. It was not too concerned about me watching it, and a couple of photos out of about 10 turned out OK. After about five minutes it dropped down deeper into the trees and disappeared. 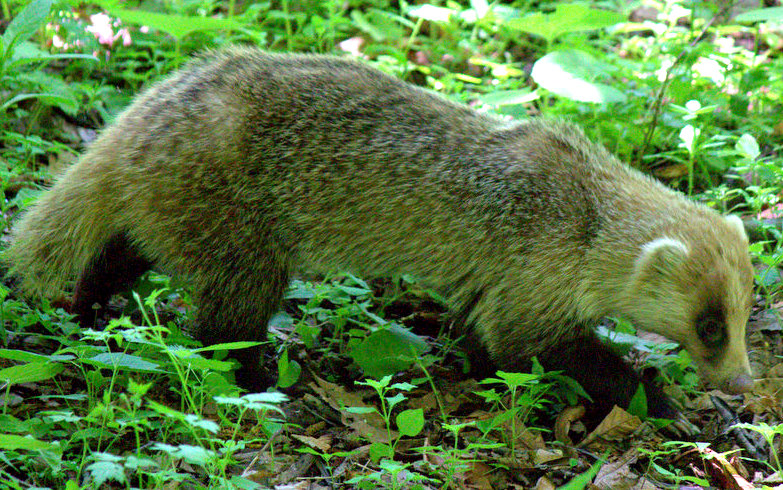 Due to the wind I did not hear any squirrels calling from the tall sugi trees at Yakuo-in, so I went up to the top of Takao-san. All was quiet there, but as I walked near the visitor centre I saw eyeshine behind a low wall: it turned out to be a Masked Palm Civet (Hakubishin) on the prowl. As I left the civet I noticed a nora-neko near some tables.

The only thing of note as I hiked to Icchodaira was a single Raccoon Dog (Tanuki) crossed the track about 250 metres from the west side of Takao-san.

It was just before midnight when I arrived at the shelter at Icchodaira, and as I had not eaten dinner, I sat down and had coffee and sandwiches before getting into my sleeping bag. The wind was blowing directly into the shelter, but once I was inside my sleeping bag, snug and warm, I soon fell asleep!

At about 0300 it began to rain, but by the time I woke up again at 0430, it has eased off. But, by the time I’d finished my sandwiches and hot coffee for breakfast, a steady rain had started to fall.

The first bird to sing today was a White’s Thrush (Tora-tsugumi) soon after 0430, and then Grey Thrush (Kuro-tsugumi) and Japanese Bush Warbler (Uguisu). By 0515, with my backpack wrapped in a waterproof cover and wearing raingear myself, I was ready to go. A few tits were calling, a Japanese Green Woodpecker (Ao-gera) called in the distance, and a Japanese Pygmy Woodpecker (Ko-gera) flew over the trees. About 10 minutes after leaving Icchodaira I heard what I thought was subsong — but it turned out to be an Asian Brown Flycatcher singing from the top of a tree. The rindo was very quiet in the rain, and just a few birds were actually singing or calling.

Some new birds for the year list today (heard only) included Blue&White Flycatcher (Oruri) and Asian Stubtail (Yabusame). I might have heard a Narcissus Flycatcher (Kibitaki) calling, but it was in the distance and I could not hear it clearly.

By 0745 I was back at Takaosanguchi Station and heading home — to catch up on my sleep!

Mammals:
Raccoon Dog (Tanuki) One seen crossing the track between Takao-san and Icchodaira
Japanese Badger (Anaguma) One searching for food in the forest about 200 metres from Yakuo-in temple
Striped Palm Civet (Hakubishin) One at the summit of Takao-san
Giant Flying Squirrel (Musasabi) One heard calling about 20 minutes after I started hiking
Feral Cat (Nora-neko) — One at the summit of Takao-san