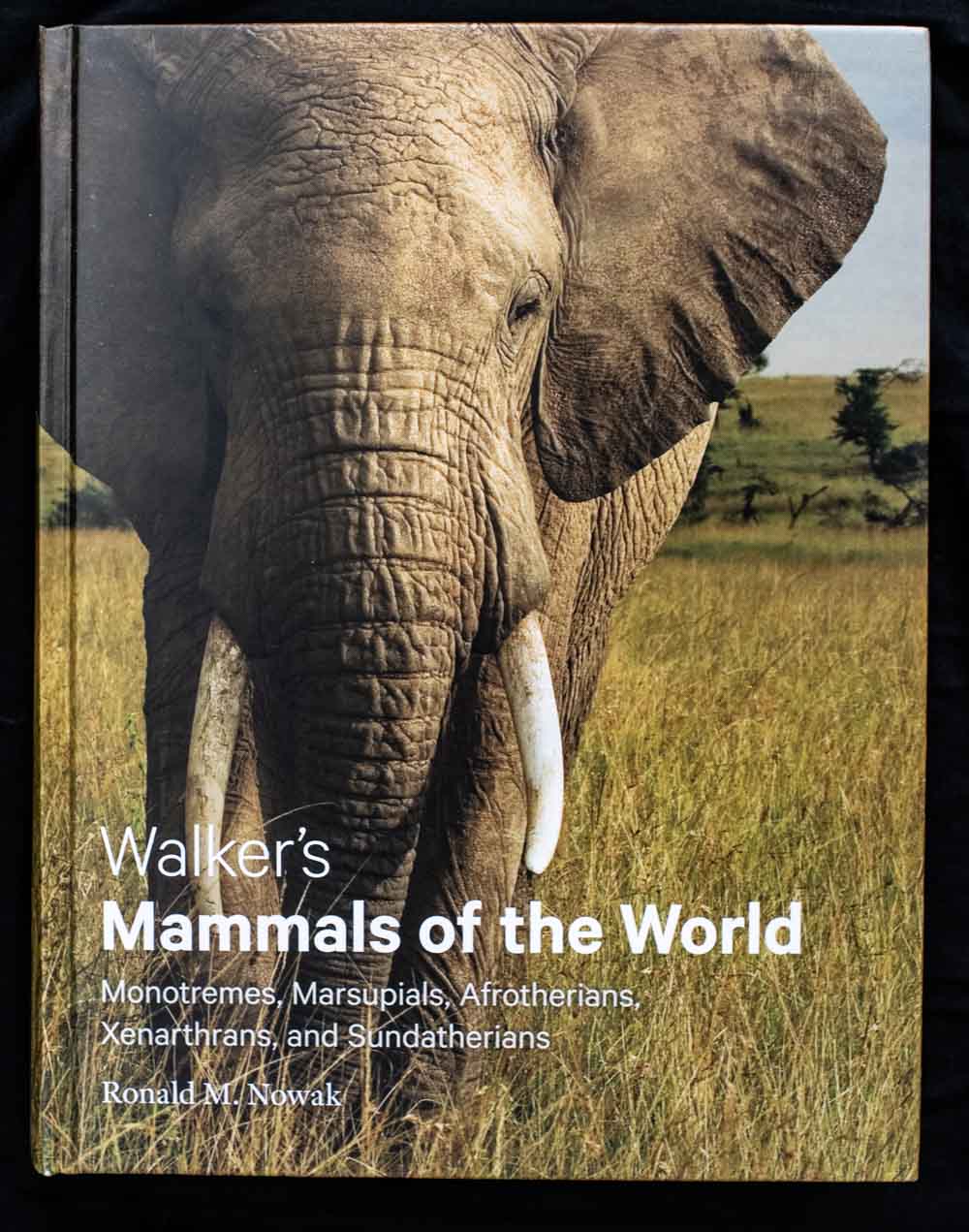 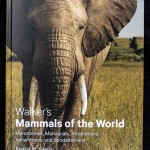 The first edition of Walker’s Mammals of the World came out in 1964, and the most recent version, which is sorta kinda the 7th edition, was released this week. In between, I have used and enjoyed each iteration. This book was in the local library when, in primary school, I began discovering a love for animals, and discovering too, just how bloody many of them there really were. (I once wrote a story that was about the zoo I planned to open. There was no plot or characters, just a five-page list of animal species, arranged alphabetically.) In graduate school, I used the third edition’s distinction between gorillas and humans—which mostly had to do with the shape of our pelvis, as I recall—to prepare my first lecture on Hamlet, centering my study on his exasperated comment, “What a piece of work is man!” In 2000, the 6th edition was the basis of my first world mammal list, and so when Amazon told me there would be a new version now in 2018, I ordered it without hesitation. I was ready: I have been waiting for an update for 18 years.

It has now come, and what a strange beast it is. Lavishly illustrated, it forgoes the previous “complete in two volumes” goal in trade for what appears to be a multi-volume approach. This un-numbered first entry may or may not be launching a new and serial dynasty; in any case, it barely covers the first 10% of even a conservative list of world mammals. This version starts with the marsupials, moves through sloths and elephants and manatees, and ends with tree shrews.

It is a pretty book but perhaps a useless one. Who needs a “mammals of the world” book that excludes 90% of species? (The text itself refers to this version as an “update.”)

I want to use this review to ask three questions: (1) Have reference books reached an evolutionary dead-end; (2) Do competing taxonomies so Balkanize nature study that a world book of mammals has become inherently impossible; and (3) Is a flawed or incomplete book better than no book at all?

First, the product itself. It is big (8.5 x 11 inches), it is thick (757 pages), it is heavy (6.6 pounds), and it is expensive ($100). It is also entirely in color, even the thylacine or Tasmanian tiger, whose archival black-and-white photo has been colorized a la Ted Turner’s Classic Movies. The extinct Steller’s sea cow has three color illustrations (a great one, an okay one, and a rather terrible one), and even the not-often-seen dugong receives 9 color photographs, each of large size and impressive resolution.

Indeed, there are a LOT of fabulous photos in this book. Some of you may even have seen these specific animals in the field, since there is a yapok shot by Fiona Reid. There just might be too many photos: not counting the cover shot and the painted illustrations of mammoths, this book includes 47 photos of Asian and African elephants. The image rights to so many high-end stock images must have been horridly expensive, and yet in this book there are no range maps at all: for dugong, what it “looks like” is fairly basic (it’s a walrus-faced sausage), but what I don’t know from memory is just where it lives. Africa and Australia somehow, but just where, exactly? There are no maps and the basic unit of the book is the genus, not the species; this is not an ID guide, or not directly.

One of the particular strengths of this book is academic rigor. Everything is cited, even if the citation lists make sentences unreadable. This book will say, “There are 19 species of tree kangaroos,” and then parenthetically cite a dozen multiple-author sources to support that. In theory, I am all for this: I teach citation style for a living, and too few students understand that listing Wikipedia as a source is NOT the same as anchoring work to refereed journal articles. Yet the level of citation I expect in a technical article is not necessarily the same as what I need in a 750-page book. At some point I just want to turn control over to the editors and say, “Look, I trust you. If you say there are 19 tree kangaroos, I believe you. Just list them and get on with it.”

So whose book is this? Is it “ours”? (Mammal watchers who experience animals in the field?) If so, it is too big even to pack in the car on most trips: it clearly as an “at home” (or “in the university library”) product. Or is it for research scientists, folks who would consult it before publishing a paper on kangaroos? That seems unlikely: in that case, one would go directly to refereed articles. Is it for the common man, whoever that strange beast would be? Hardly likely: the subtitle on the front cover is “Monotremes, Marsupials, Afrotherians, Xenarthrans, and Sundatherians,” which seems guaranteed to clear a room in a hurry.

Reference books may be an impossible genre now. Prior editions of this book could be in two volumes because we knew less, expected less, and lived in a more stable, less frequently revised world. I remember when there were just two elephants, African and Asian, and no debate about those boundaries. This book goes with the “two-elephant” theory for Africa, and it spends ten pages reviewing evidence. Yet even after all those cited reviews, I remain confused…is forest elephant truly a unique and valid species? (Um, probably?) Yet the discussion here is hardly authoritative, since the elephant split is a political issue too, both for ivory trade and for conservation laws. It is a cultural issue—unlike tree shrews, elephants exist in a complicated cultural and historical context—and it is a conceptual issue. (Shouldn’t different species look different?) Even if we limit ourselves to DNA studies and skull morphology, future work could invalidate the work presented here. Since any elephant discussion will be inherently truncated (pun intended), then being tidier and briefer could make this book more useful, not less.

That is because at the pace of coverage this version achieves, there will need to be nine or ten more volumes after this one, and if that is their intent, neither the preface nor the website promise that, nor, if they are coming, are we told what the publication schedule will be. I have no interest in waiting another 18 years before a second volume comes out. In the case of this specific title, there is an e-version, but having bought the hard copy (I do love books, to be clear), I am not willing to get an e-version for a separate purchase price. If anybody has the e-version, please comment below. Is it easy to use? Can you zoom in on the images? Are the citations hot-linked?

Taxonomy has become a problem as well. It seems that each species list I check disagrees with the next one, and as an outsider to systematics, I can’t figure out what the underlying patterns are. This book says that it generally follows Wilson and Reeder, which makes sense, since their list is released by Johns Hopkins U Press, just as this book is. I would like to know better what’s been left out (and why), and even would accept a bit of speculation about pending splits. To quote Wilson and Reeder, “Because of the inherent fluidity of mammalian taxonomy, with dramatic changes occurring in relatively short periods of time due to new data and interpretations and new species discoveries, we anticipate continued changes to the arrangement presented here.”

Perhaps a hypothetical “mammals of the world” reference book should be digital and updateable, as is the Wilson and Reeder master list. I usually travel with an iPad, both for books and music while flying, and because I teach online, so I need to do work chores while abroad. Others use their phones the same way. Digital versus analog is becoming less and less of an issue. Would any big book like this be better as a digital version? Indeed, would ALL field guides make sense that way? I love books, I have a house (and two campus offices) filled with many thousands of books, and yet holding this book (or trying to: it’s really heavy), I wonder if this same information should be delivered differently.

Of course, flawed books (like flawed people) can still be fascinating. Browsing at random tells me that Florida’s manatees sometimes swim to Cuba, that aardvark meat tastes like beef, that the tamandua’s mouth is no bigger around than a pencil, and that even in the 19th century, mammoth ivory was already being dug up and sold—6000 tons of it, 1809-1910.

Yet what if this turns out to be the end of the line for Walker’s? We get marsupials and colugos and some odd bits like the pink fairy armadillo, but after this, no follow-up volumes appear? I will confess I will feel a bit “had.” If this book won’t be part of a robust and swiftly released series, then fooey. Even if it eventually goes through the entire fauna aardvarks to zebras, we already have Handbook of Mammals of the World well on its way to completion. Say what you want about it, at least it is out, or nearly so.

What the market does not have is what this series used to do best, which was to be a compact yet reliable guide to mammals of the world, as the title promises. In modernizing and updating, enlarge the trim size, sure, and even go from two volumes to three, but don’t try to be something that we already have. Rather, be “yourself,” Walker: be a guide to the world that I can keep on one shelf and whose installments will come out all at once (or at least inside of a year or two). Have some way of releasing digital supplements to keep up to date and don’t go hog wild on illustrations. (47 elephants? A few more shots and it could be a stand-alone title, “Pachyderms of the World.”)

Romantic poet Samuel Coleridge had a vision of the mythical palace of Xanadu, developed in “Kublai Khan.” Inspired by an opium-fueled dream, he was writing the poem in a trance when he was interrupted by a knock on the door. When he sat back down, the rest of the poem was gone, never to return. The extant fragment is elegy to itself: a testament to what might have been.

I hope that is not what the current version of Walker’s Mammals of the World has become.