This last-minute 3-night visit with Juan Cruzado Cortes was arranged as a follow-up to a longer trip focusing on the peninsula’s mammals in March 2018. Both of us were less prepared than usual as we were originally intending to spend a week visiting sites in Oaxaca and Chiapas. Despite touch-and-go planning and numerous logistical issues, the trip was quite successful and we managed to find 27 mammal species, including most of the peninsula’s remaining key species and several real rarities.

Note that this report should be used in conjunction with my March 2018 report as a reference to this region. All bat IDs were by detector, using Juan’s personal library of calls from animals he has captured by mistnet as part of his project to catalogue echolocation calls of all relevant bat species of Mexico (not useless auto-ID features included in some detectors). 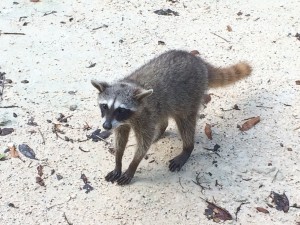 + Cozumel Dwarf Coati is more difficult—2 seen on the track to the wasteland at (20.2997, -86.9741) after much searching; no current stakeouts with habituated animals

+ The island is a ghastly tourist trap—highly recommend spending the minimum time possible; I’d recommend taking the passenger ferry from Playa del Carmen (every hour) and leave your car in secure parking on the mainland—rent a car on the island, 4WD recommended for the raccoon site

+ Cozumel has a roadkill problem; we saw roadkills of both raccoon and coati in our short visit…

+ Gray Fox is also common; reports of brockets at the site are misidentified White-tailed Deer

+ Visited as a last-minute alternative to wilder Reserva el Eden (closed for the holidays), this site has a fantastic mammal list but I didn’t have too much luck this time around

+ No captures in 40 traps, despite many presumed pocket mouse burrows nearby; 2 roadkill Gaumer’s Pocket Mice also seen on the Xocen-Chichimila road. We could only set traps at 10PM, so if this species is a priority, try setting them at nightfall when it is likely more active

+ Margay is resident ~3-4km down the road and tall forest past the gate holds Yucatan Brown Brocket and likely Yucatan Vesper Mouse; spotlighting was ruined by rain and a morning drive/walk here only yielded a Central American Agouti

+ My favorite mammal watching site on the peninsula, which combines a great mammal list featuring several impressive and/or rare species with spectacular Mayan ruins and huge expanses of intact forest

+ A 3-hour night drive on the first 20km yielded a fabulous Margay walking off the road as well as Gaumer’s Spiny Pocket Mouse, Common Opossum, and Big-eared Climbing Rat

+ It’s worth noting the first 20 km are ejido land (not park) so the best drive would be to leave the ruins as late as possible and drive the road back through the reserve at dusk/night where large mammals are more likely; I’d only use thermal imager however, not spotlight

+ A 2-hour night walk at Campamento Yaax’che yielded a Mexican Mouse Opossum; the resident troop of Yucatan Black Howlers were easy to hear the next morning

+ See my March 2018 report for more details on bats; according to Juan’s friend who researches Chrotopterus auritus at Hormiguero, Yucatan Vesper Mouse and Wrinkle-faced Bat are reportedly quite common in forests surrounding the site

+ There is a roost of Yucatan Yellow Bat and extremely local endemic Alvarez’s Mastiff Bat in the north of the city; contact Juan for details on the location

+ An interesting area for many endemic species of the arid zone of NW Yucatan, though mammals are a bit thin on the ground and the mosquitos are diabolical; pack insect repellant or prepare to suffer—Juan had over 30 bites, while I got ~50 in just a night and morning…

+ A 3-hour night drive on the road heading South from (21.2835, -89.6375) yielded Northern Raccoon in mangroves, fabulous Big-crested Mastiff Bats hunting over the wasteland at (21.2835, -89.6375), and Eastern Cottontail as well as abundant Davy’s Naked-backed Bat and distinctive Yucatan Yellow Bats in the thornscrub

+ 70 traps in the thornscrub got 5 Yucatan Deer Mice and a White-footed Mouse; we set traps at 10PM so I suspect, again, we were too late for Gaumer’s Spiny Pocket Mouse (reportedly common here)

+ There is also a roost of Alvarez’s Mastiff Bat at Santa Clara, 70 km to the East