I spent a weekend in Arizona last month. I went to visit my son Patrick, who is in Flagstaff for the summer chasing a two-legged mammal. Purely by coincidence, of course, there were some rodents nearby that I simply had to look for.

We spent the weekend in the small town of Springerville, at two sites that Jose Gabriel Martinez put me onto. 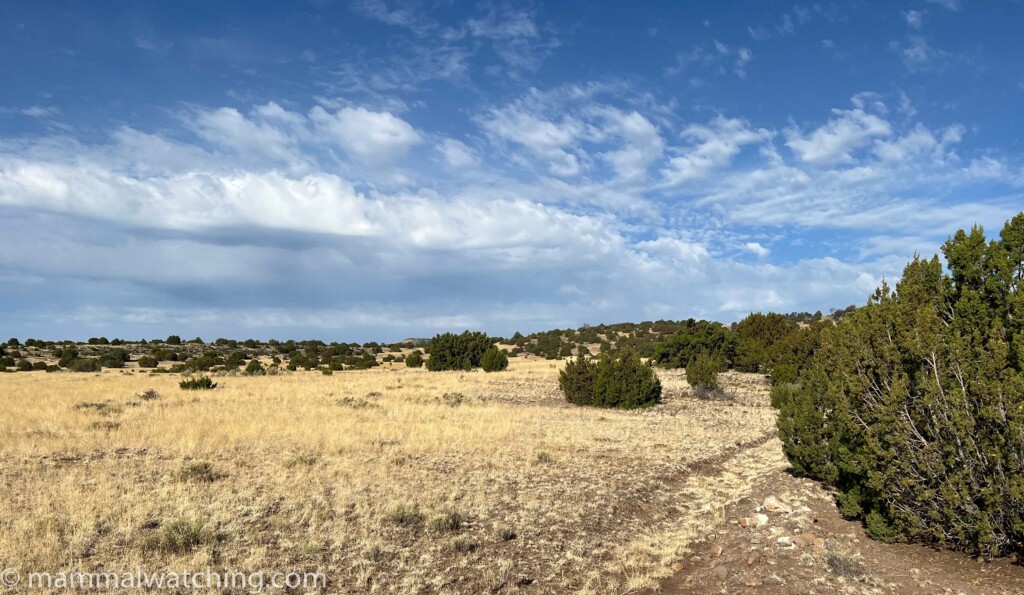 We spent a night looking around grassland and open forest just outside Springerville. Jose recommended this spot as a place to see Banner-tailed Kangaroo Rats and Mexican Woodrats.

We saw several Banner-tailed Kangaroo Rats along the road. Their large communal burrows were slightly raised and bare of vegetation, with multiple entrance holes. We saw half a dozen animals, nearly always very close to their burrows. They dashed underground when the spotlight hit them. No photos but good views of this large kangaroo rat with a distinctive tail. 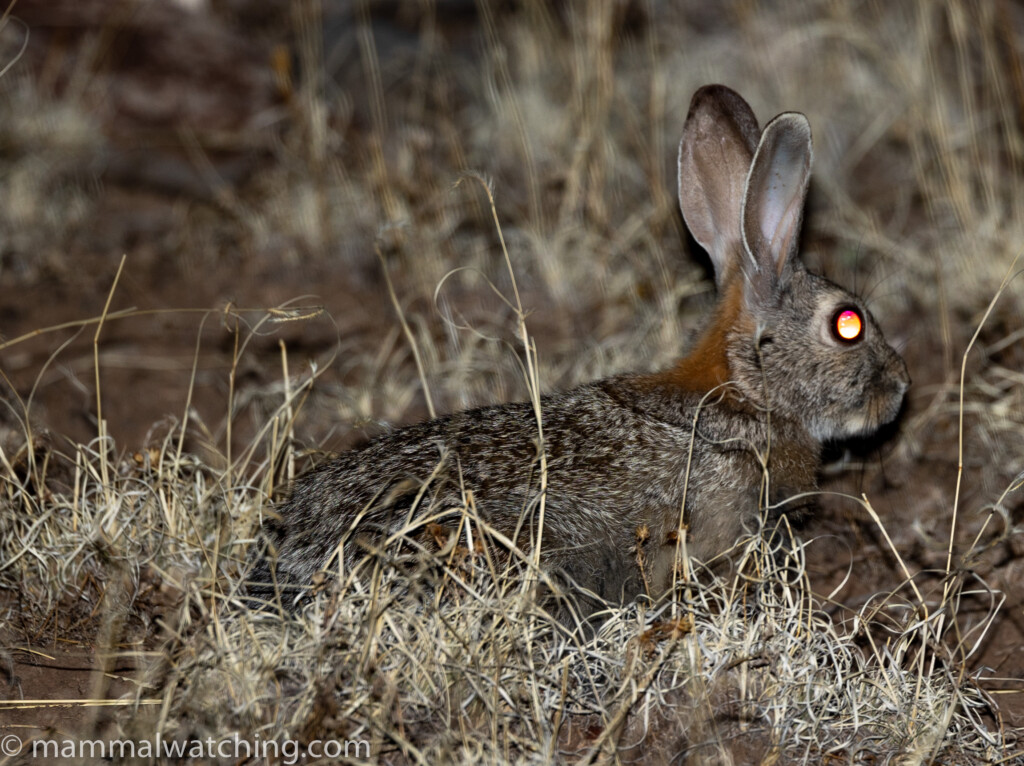 There were numerous tiny mice dashing through the short grass, that were fairly easy to spot with the thermal scope. Those I got a decent look at were all Silky Pocket Mice: Jose had said they are common here. This one froze conveniently in the open and Patrick caught it by hand. 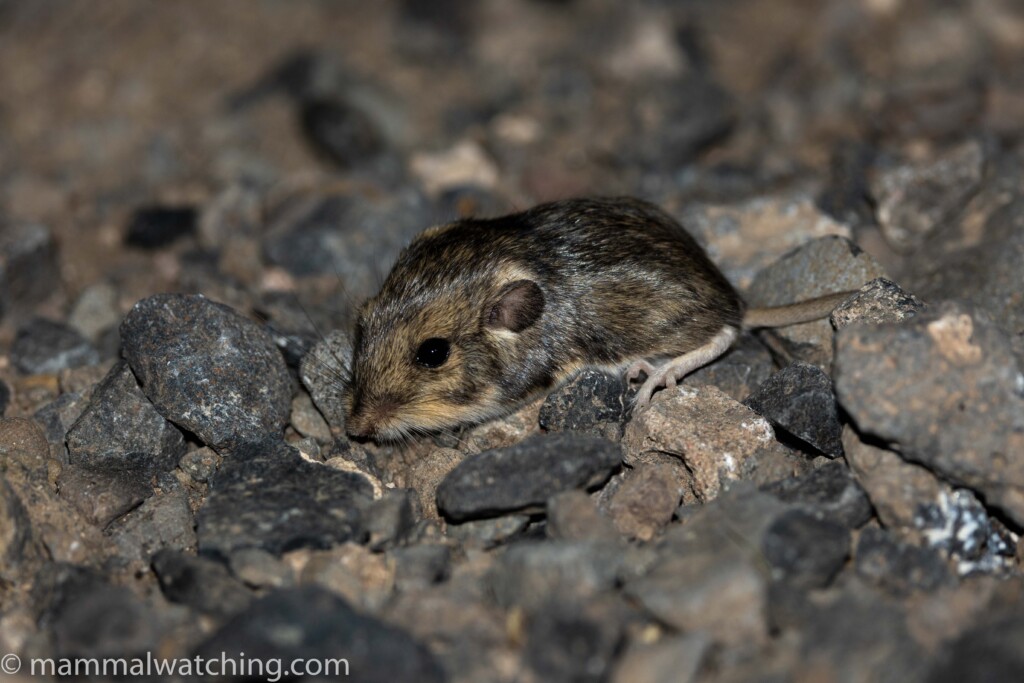 A tiny mouse, one of the smallest in North America, and my first good view of this species. 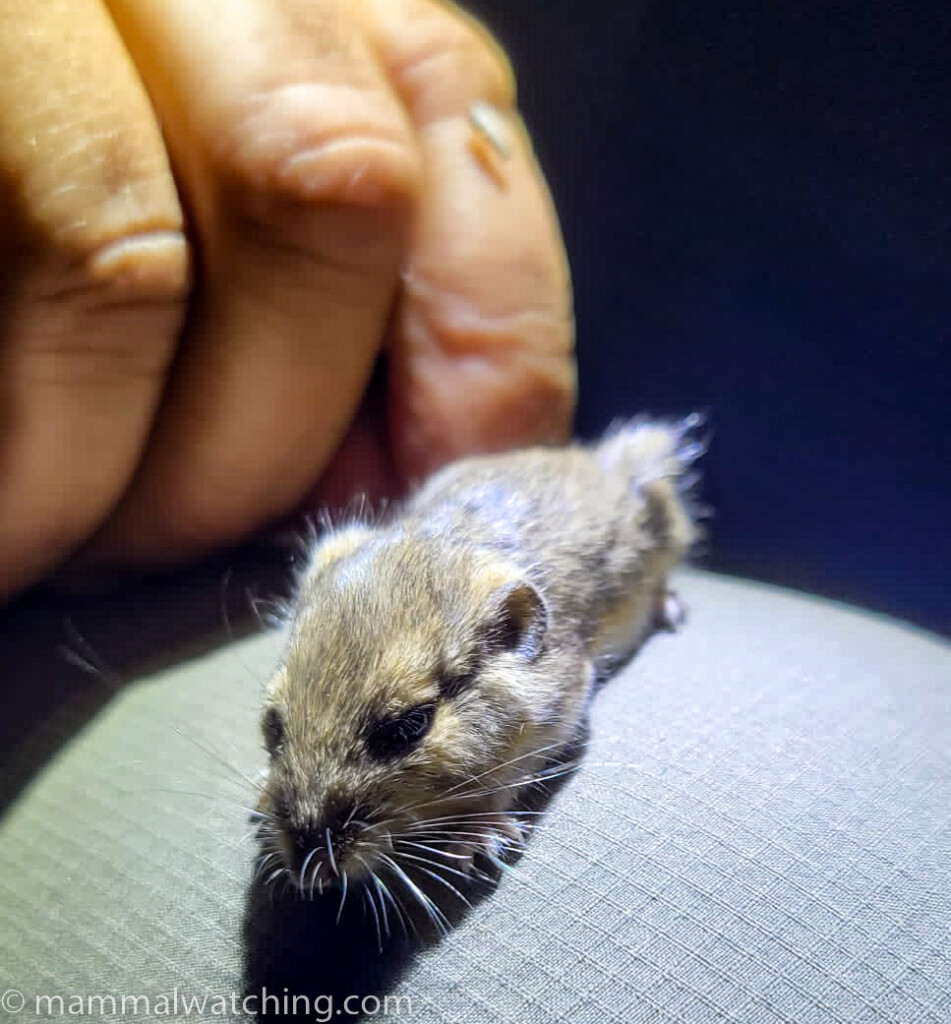 Wandering around for an hour or so with a thermal scope among the trees at the end of the track produced more Silky Pocket Mice as well as several (probable) woodrats at the bottom of – or low down in -trees.  I say “probable” because I often find it quite hard to gauge size through a thermal scope and I wasn’t able to find any woodrats with my flashlight. They all seemed to melt into the undergrowth when I turned the light on them.

But we set Sherman traps and the next morning caught one Mexican Woodrat. When I got back to the hotel and my field guide I realised I should have checked the base of the throat fur to ensure the roots were grey, not white: this is the way to rule out a small Western White-throated Woodrat. I started fretting. I messaged Jose. He talked me down off the ledge, reassuring me that he had caught a bunch of Mexican Woodrats here. And he had only caught Mexican Woodrats. So I was almost able to relax. Almost. 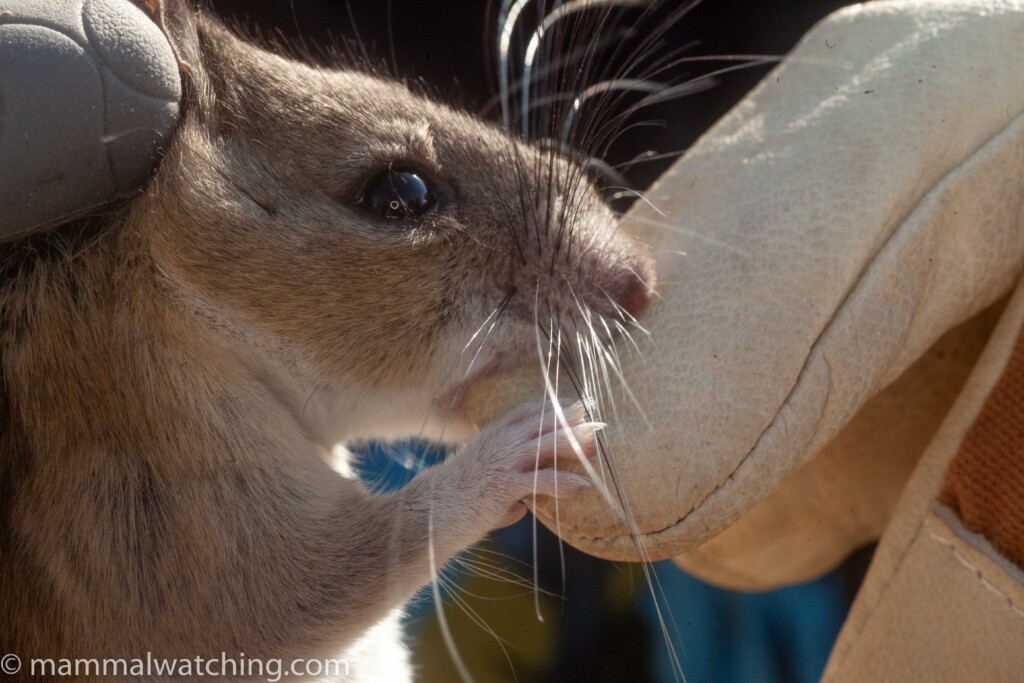 I was also almost able to convince myself I could see some grey roots in the chest fur too. Almost. But on the strong balance of probabilities given previous captures it seems this is a Mexican Woodrat.

The deer mice were more problematic, not helped by the fact that we took down measurements of several animals on a phone, but I don’t remember whose phone and now I cannot find the measurements. So my ID’s are mainly based on these pictures and in particular each animal’s ear size, with a bit of relative tail-length thrown in. Though we did check the measurements as we went along and they aligned with the following species.

The first is a Western Deer Mouse: small ears and a short tail. 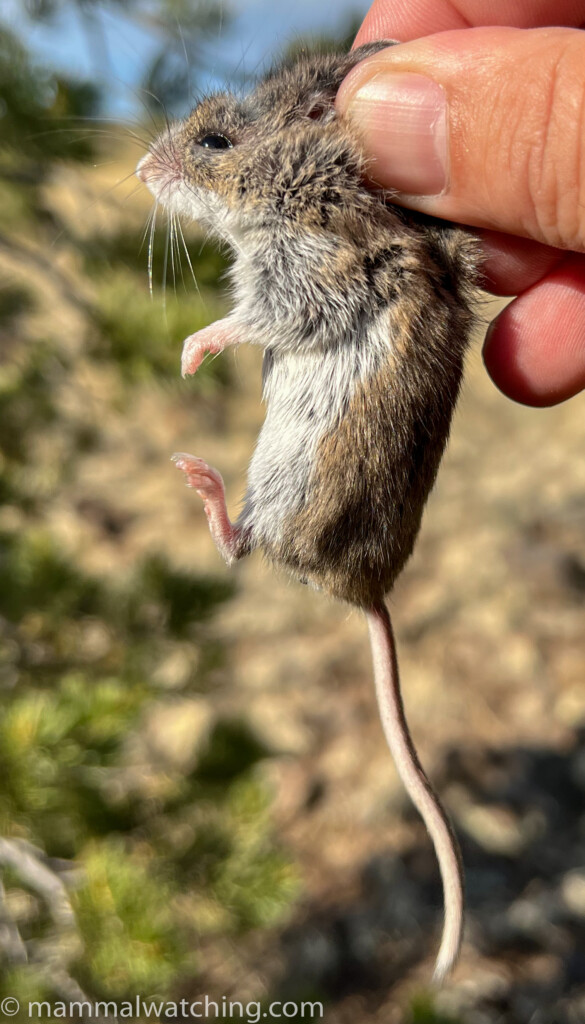 This, with larger ears looks like a Brush Mouse.

The following photos are from two animals. Both look like Northern Rock Mice, a species I had not seen in the USA before (though I have in Mexico). The ears seem too big to be anything but a Rock or a Pinyon Mouse (both of which have been caught here). They don’t seem big enough for a Pinyon Mouse to Jose or me. The tail looks to be about head-body length, perhaps a bit longer which also makes me lean towards Northern Rock Mouse. Though the fur colour – in some pictures at least – seems to be a better fit for Pinyon Mouse. 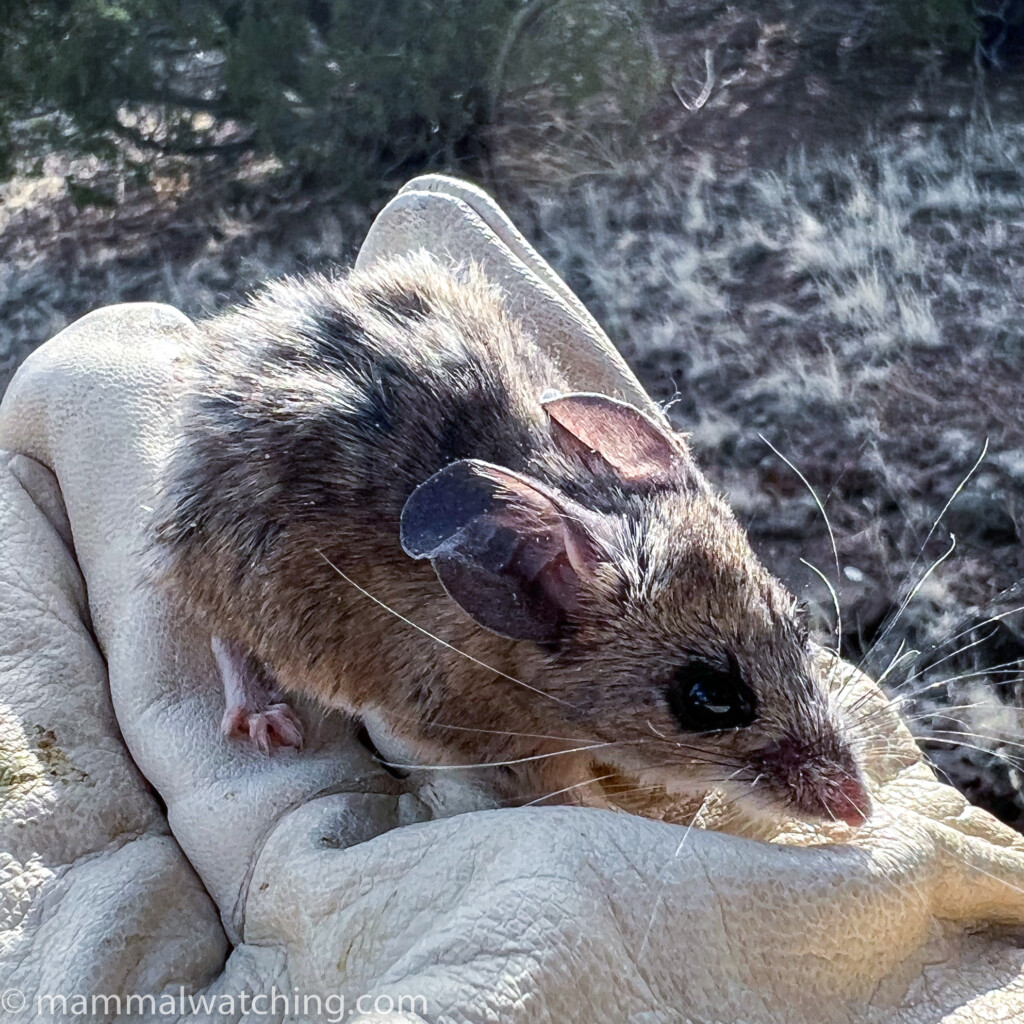 Here are several photos. If someone more expert than me has an opinion please let me know. 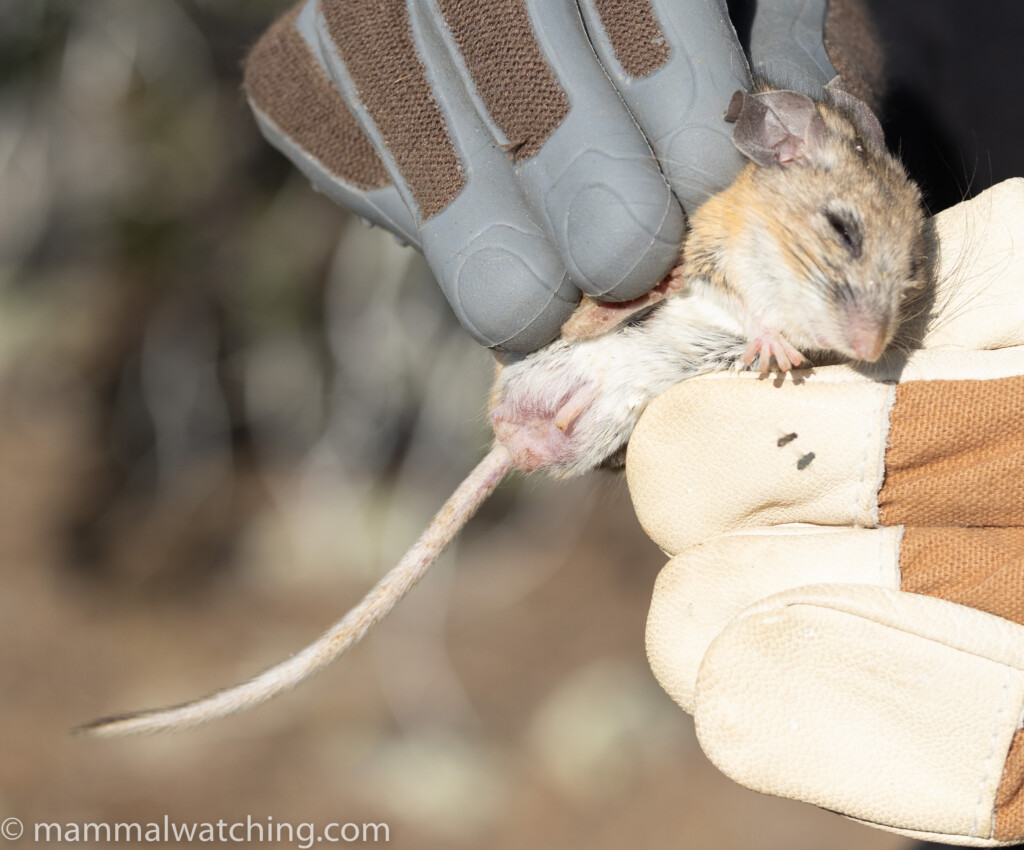 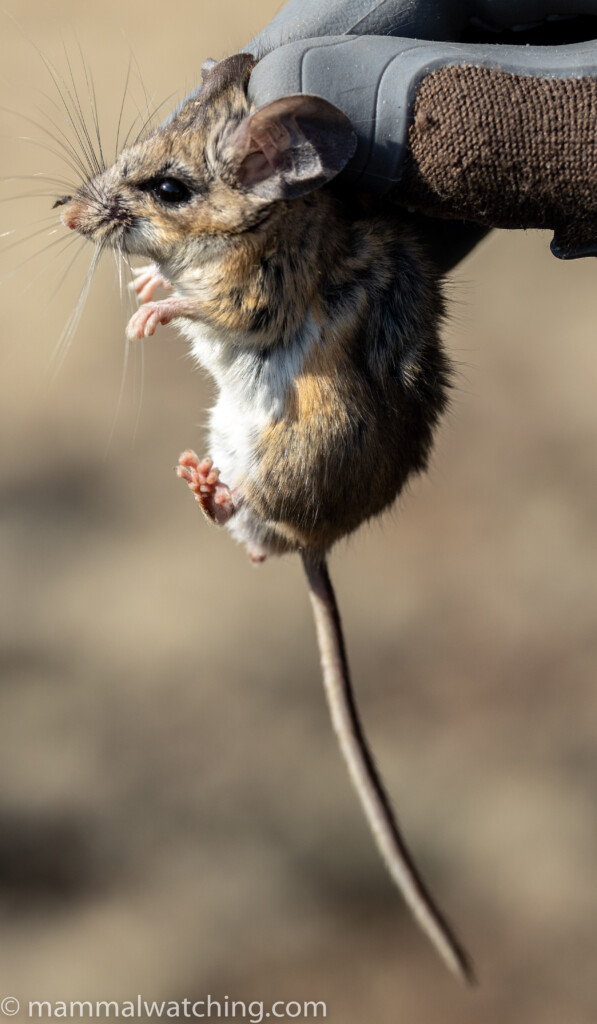 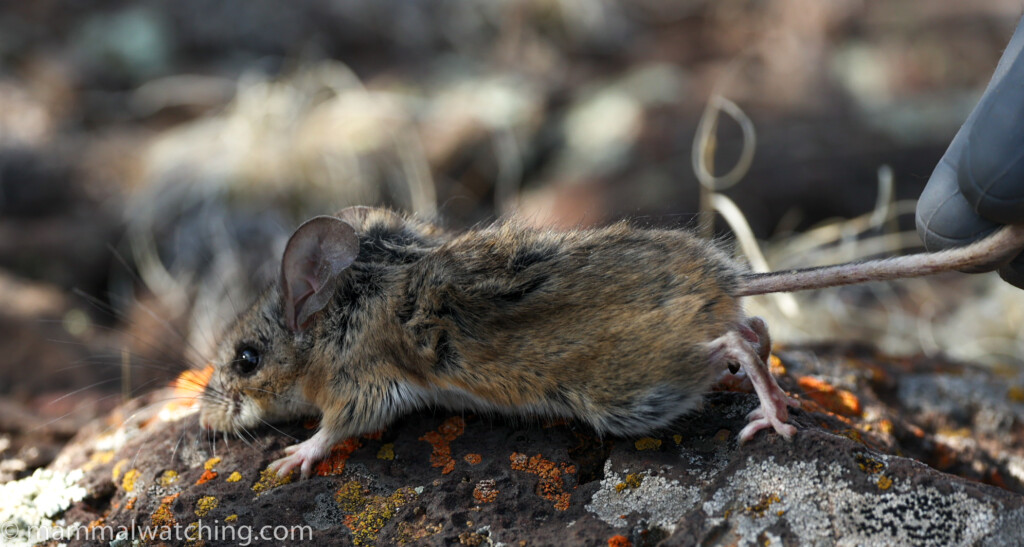 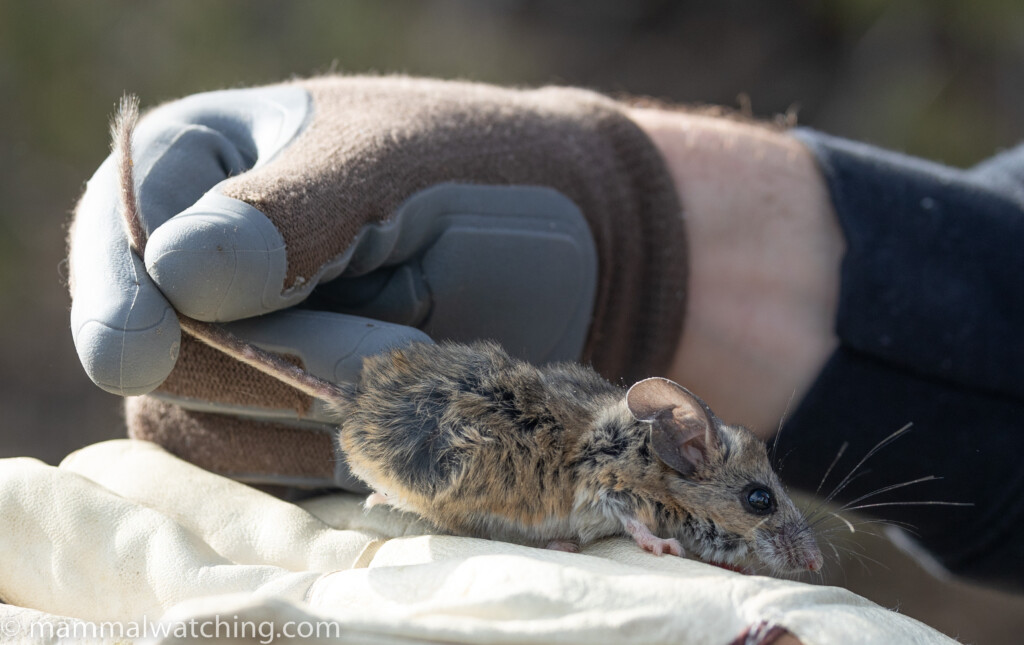 We also saw Gunnison’s Prairie Dogs, Black-tailed Deer and Pronghorn in the area. 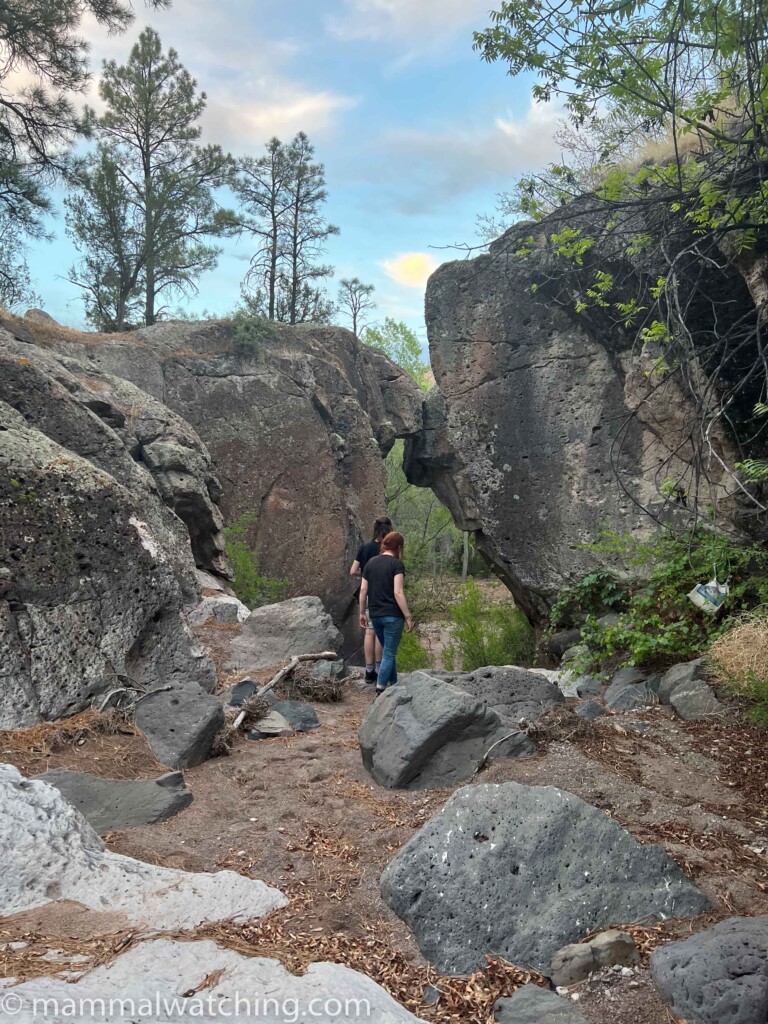 The next evening we drove for an hour or so and crossed the New Mexico border to reach a spot close to the small town of Reserve. This too was a site that Jose Gabriel had recommended: he had seen several Stephen’s Woodrats along a dry river bed here.

An hour at dusk produced one woodrat (that for once I found without the help of a thermal scope). 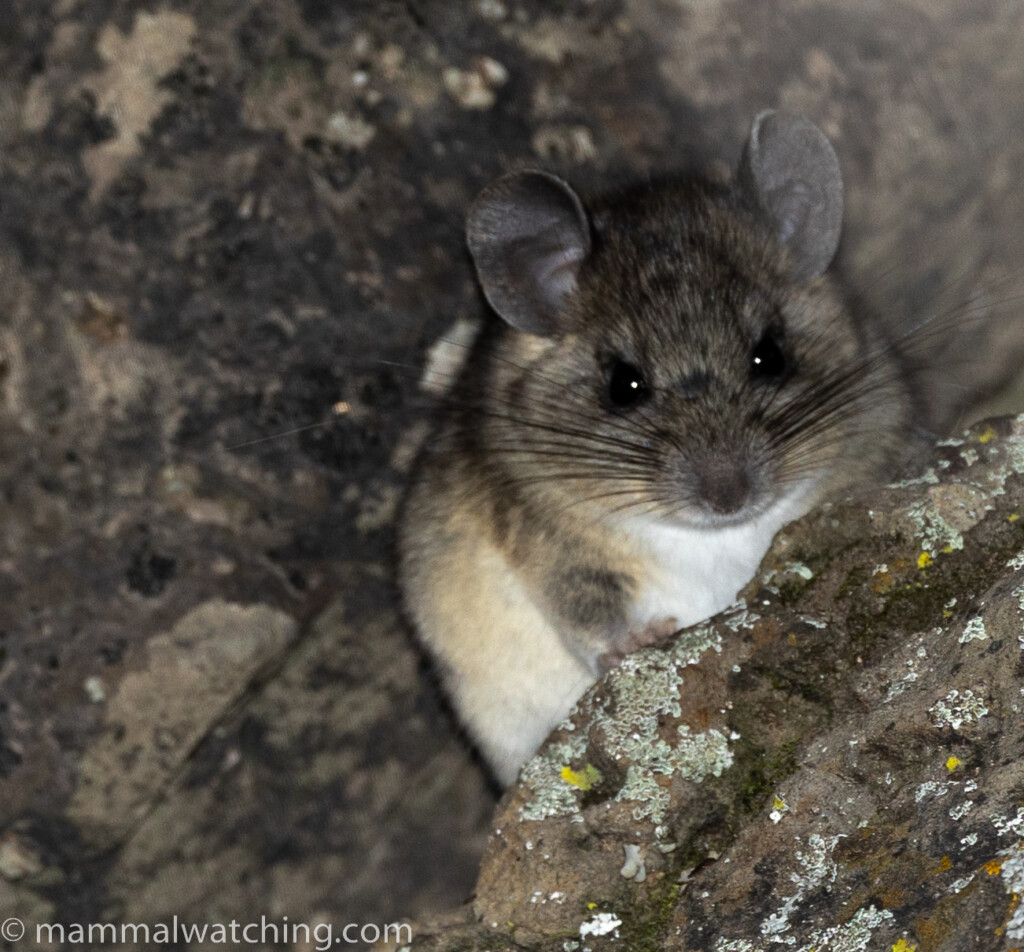 The animal was in a crack in the rockface bordering the creek, just before the river bed drops by 20 meters down a very steep incline. It did not show its tail tip, which I needed to see in order to identify it accurately. It was not a large woodrat and it was most likely Stephen’s Woodrat, but I cannot be sure from this photo as Jose has also seen Bushy-tailed Woodrats in the area. 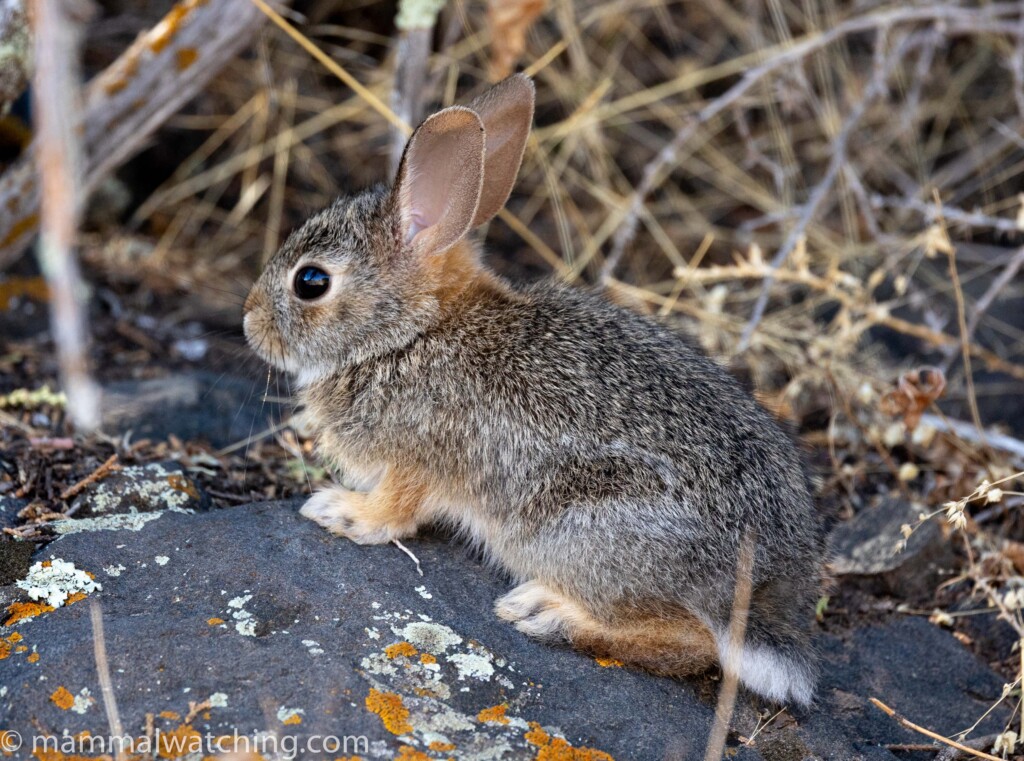 Other mammals that evening and the next morning included plenty of Elk along the road (one of which we helped released from a fence it was tangled up in), an Abert’s Squirrel (along the road), a Mountain Cottontail and another Brush Mouse at the woodrat site. 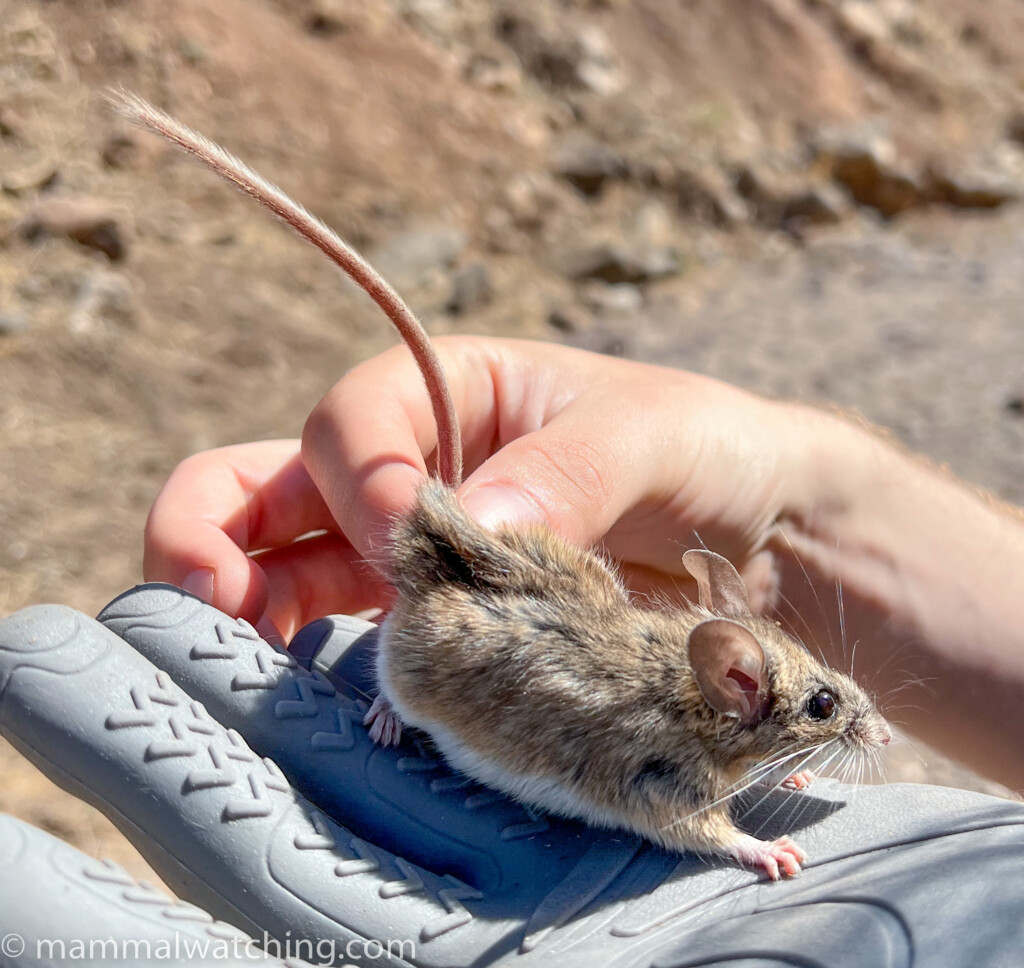 Thanks to Jose for all the detailed site info and to Patrick and Kylie for their help and company.