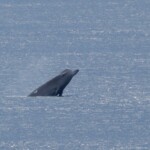 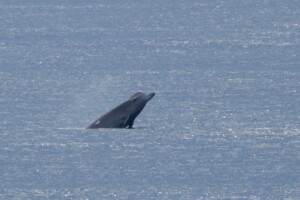 (edited to include photo)

I did a last minute cruise with Adventure Canada, which is one of the only ways to try for the resident population of Northern Bottlenose Whales in the deep canyon known as the Gully. The Gully is a Marine Protected Area just east of Sable Island and the Canadian government makes it hard to go there.

Sable Island is a Canadian National Park known for lots of shipwrecks in the 1800s, wild horses introduced a couple hundred years ago, and the world’s largest breeding colony of Grey Seals. What I found interesting is that it’s a giant sandbar, there’s not a rock on it. Other than barrier islands along various coasts I don’t know of any other island like that.

So at 5 am on our fourth day we were at the mouth of the Gully, at the continental slope, and ran a transect at 12° for several hours. After a few hours and as I was getting anxious a group of 6-7 Northern Bottlenose Whales breached maybe 400 meters off the starboard bow, even bare eyed they were easy to ID.

Soon after there were some beaked whales off the starboard bow, they went down and then four surfaced off the port bow with their beaks first, at about 45°, and their heads were above water. Sowerby’s Beaked Whales was the consensus after looking at photos, so far there are no photos of an adult male with a diagnostic tooth.

Through the day several pods of Atlantic White-sided Dolphins, maybe 50+, showed up. A couple Minke Whales and a Blue Whale were reported but I didn’t see them. The biggest Sunfish/Mola Mola I’ve ever seen floated past and a Bluefin Tuna leaped out of the water amongst a small commotion of birds and dolphins.

If you’re ever on a boat in those waters you don’t have to risk the ire of the Canadian government and sail the Gully without permission. Only 30% of the resident ~160 NOBWs are actually in the Gully at any one time and there is another deep canyon east of the Gully with lots of sightings, according to OBIS-SEAMAP: