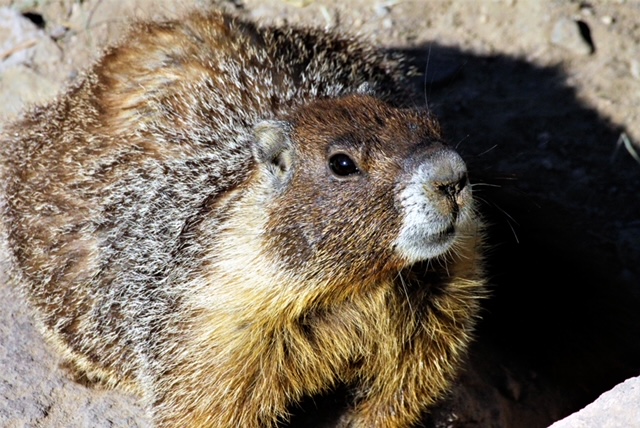 On Friday, July 29, my wife and I spent the day at Crater Lake National Park in Oregon.  By far, the most abundant squirrel is the Golden-mantled Ground Squirrel.  They are very easy to find and photograph at any of the many “overlooks” around the rim drive around Crater Lake.  Yellow-bellied marmots are also found in meadow habitats but they certainly are not what I would deem common.  They can be found but require lots of scanning with binoculars and spotting scopes and they tend to be fairly skittish.  One area, where I had great success was at the very first rim over-look after leaving Rim Village Visitor Center.  Upon leaving Rim Village, you take a right to do the rim drive, in a clockwise direction.  At the first over-look, which is on the right, there is plenty of parking in a dirt pull-off.  As soon as I got out of our jeep, I heard a marmot whistle.  I scanned with my binoculars and found an adult yellow-bellied marmot about 100 yards out, standing up-right at is burrow.  I walked across the road and noticed movement in a rock pile where a culvert passed under the road.  It was one of those observations where fast movement caught my eye but I was not sure what I had seen.  I backed away and waited a short time, then very slowly approached the culvert from a distance further down the road.  There were two very young yellow-bellied marmots peering out of a burrow in the small rock pile.  I was able to get a few photographs, then I retreated again for about 20 minutes.  When I approached this time, there were 4 baby marmots.  I was able to get some very nice images with a 400mm lens.  I whistled and two of the young ran for the burrow but the adult female emerged and perched on a rock near the burrow entrance.  She was very accommodating in allowing a good number of images. 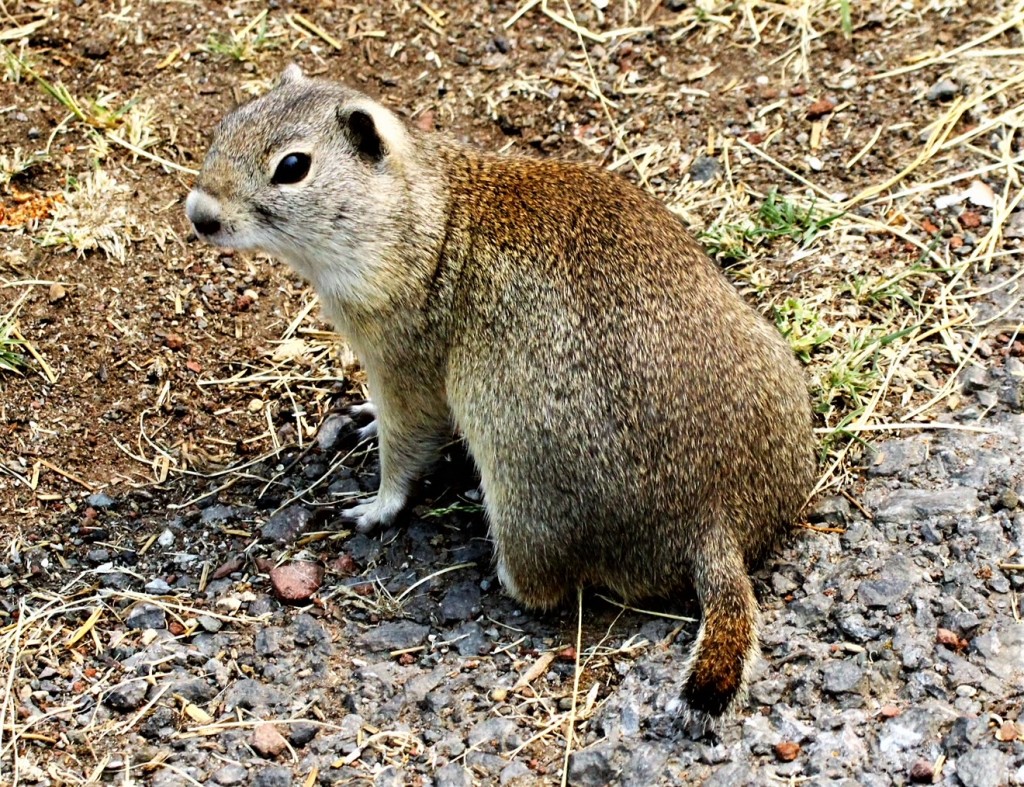 On the following day, Saturday, July 30, we drove to Diamond Lake Recreation Area in Douglas County, Southern Oregon.  The Lake is at an elevation of just over 5,000 ft. and is surrounded by forests, meadows, small areas of marsh and numerous camp grounds, picnic areas and it is surrounded by an asphalt bike path that is 11 miles long.  We arrived at the South Shores picnic area where we were to begin our bike ride.  I walked to the lake edge, only 60 feet away, to view some golden-eyes (ducks) that were just off shore.  As I approached the shore, I noticed a very tiny furred creature, running in some tall grass.  I soon found the little creature in my binoculars and it was a baby Belding’s Ground Squirrel.  I quickly went and got my camera and found that there were quite a few very young, but weaned, Belding’s ground squirrels in the area.  I was surprised at just how small these squirrels appeared but all were foraging on different seeds and grasses in the area.  All appeared to be very “rotund” and thus were already storing fat reserves for their estivation / hibernation.  I walked around the area photographing baby Belding’s but was surprised not to see any adult squirrels.  My thoughts were that they had already stored adequate fat and had already entered estivation as it was incredibly warm and very dry.

Later in the day, we visited the Diamond Lake Resort Area.  There are cabins on the edge of the parking area as well as some grass with picnic tables.  Here, the Belding’s were habituated to people and there were a number of adult Belding’s begging food from people at the picnic tables.  So, the adults in this area, with an abundance of food, were up and actively soliciting for food.  There were a few babies as well, but nothing like the numbers of babies at the South Shore Picnic area.

Of note, while on our 11-mile bike ride, I found a dead Siskiyou Chipmunk on the bike path.  The chipmunk appeared to have been struck by a bicycle.  I did observe two other Siskiyou Chipmunks but I was unable to secure photographs.  Also observed were two Douglas Squirrels and on the drive in a Dead of Road (DOR) red squirrel.