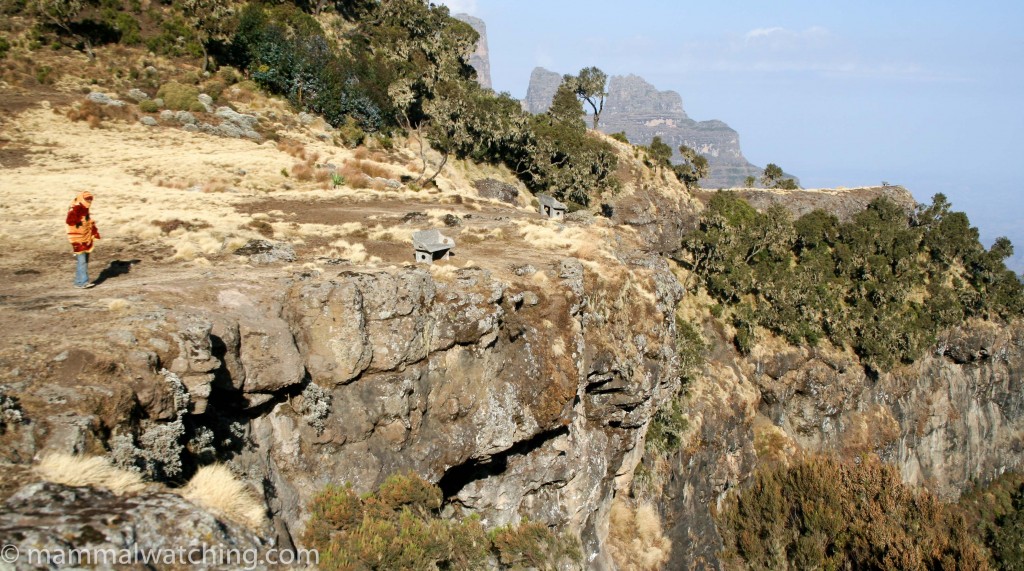 The Simien Mountains are a quite remote and scenically stunning national park in northern Ethiopia. They are home to good numbers of Gelada Baboons, a few Ethiopian Wolves and the world’s last few hundred Walia Ibex. I visited for a weekend in January 2008.

Travelling to the mountains is part expedition and part job-creation scheme. I wrote to several operators and they all insisted I needed a driver, a guide, a cook and an armed guard. If I had had to walk anywhere with my gear then I would also have need a mule and mule driver. Several thousand tourists visit the mountains each year so they generate a sizeable chunk of income for the locals. 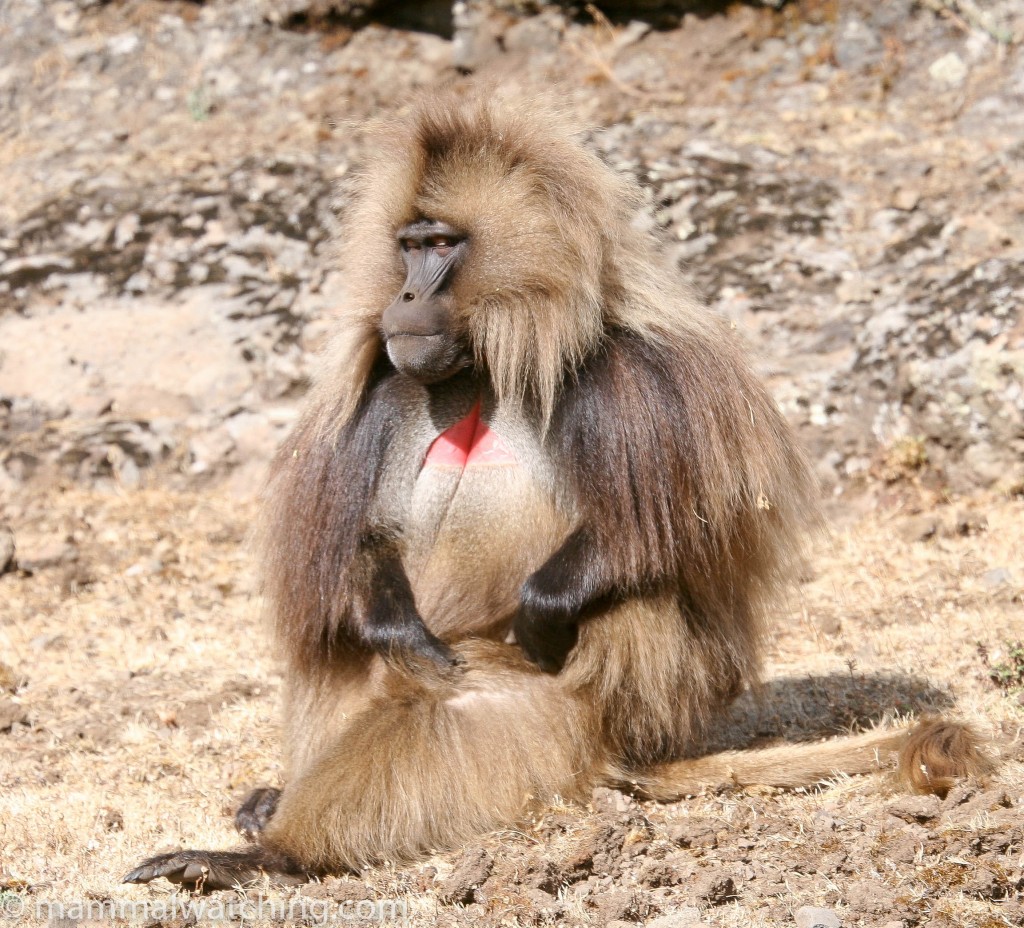 I ended up arranging my trip through an agent based in Gondar called Bedassa. He was quick to answer my emails and also offered the best price. I recommend him highly: he even paid for my air tickets Addis-Gondar without asking for any money beforehand.

The team he provided were all very friendly, though I am not entirely sure of the purpose of “the man with the gun”. I suspect he had never so much as raised his gun, let alone fired it. But whenever I wandered off somewhere he and his gun would materialise close by. My guide – Meles Yemeta – based in Debark was good on the mammals and again is someone I would recommend. 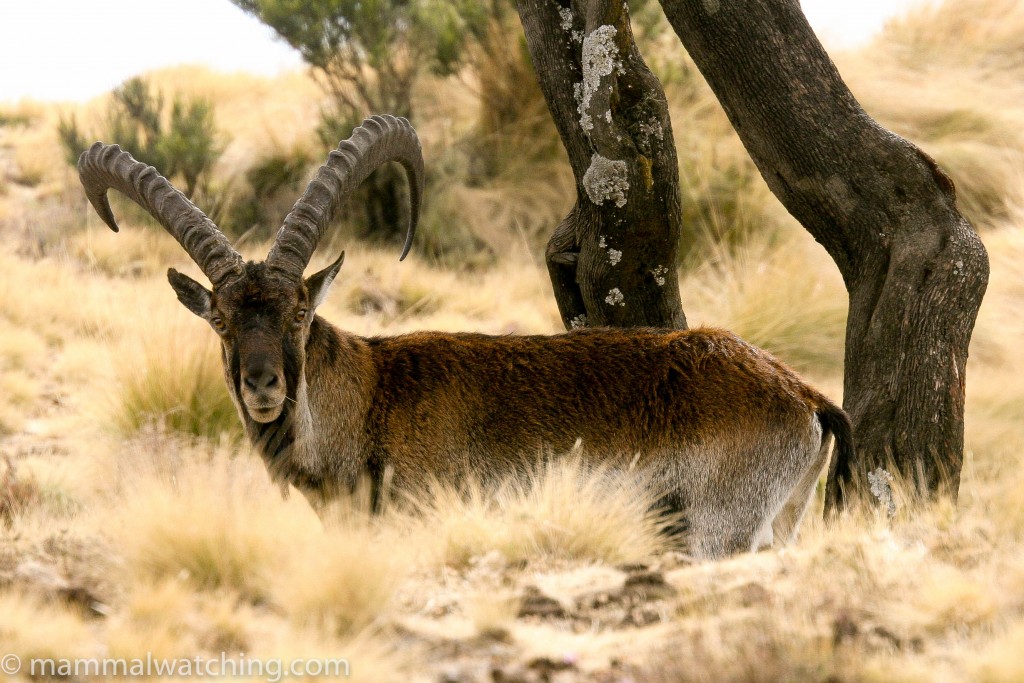 There are various routes to take to visit the mountains. I only had a weekend so I headed straight for Chenek Camp which is the best area for wildlife. It is a 2 hour flight from Addis to Gondar. Then a 4.5 hour drive to Chenek via the village of Debark. 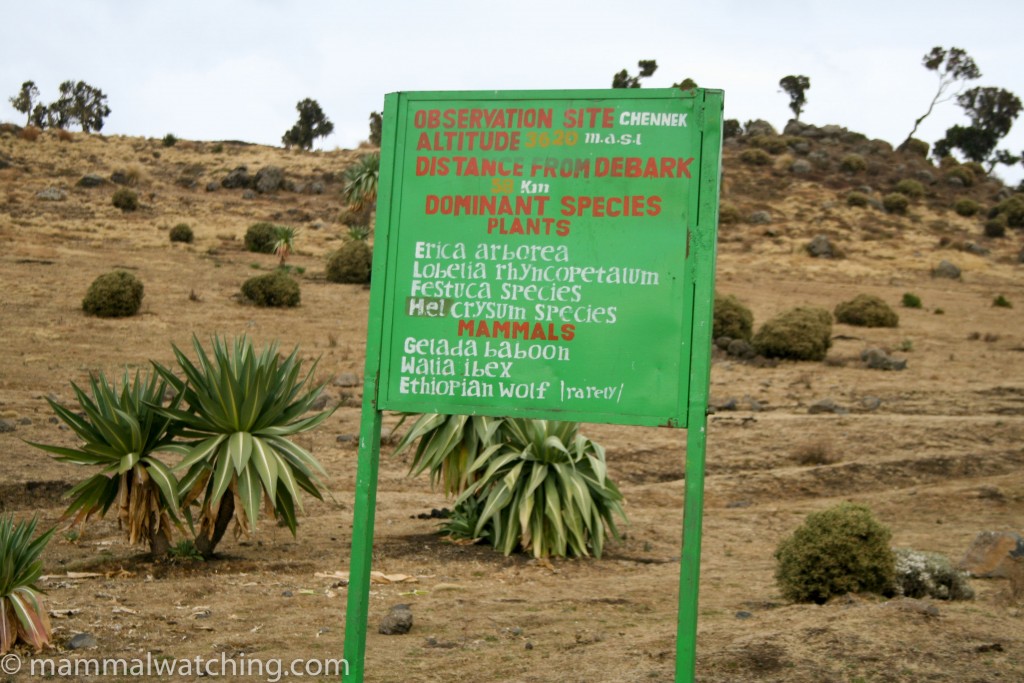 The trip was fine, although Gondar had been out of fuel for 24 hours when I arrived. The Landcruiser was empty but eventually Bedassa found a stash of fuel set aside for – now get this – set aside for emergency vehicles and tourists! Sure enough there was nearly a riot when we arrived and filled up surrounded by the crowds who had been waiting overnight. Imagine the reaction in Australia, Europe or just about anywhere else if the locals couldn’t get fuel but tourists could….. 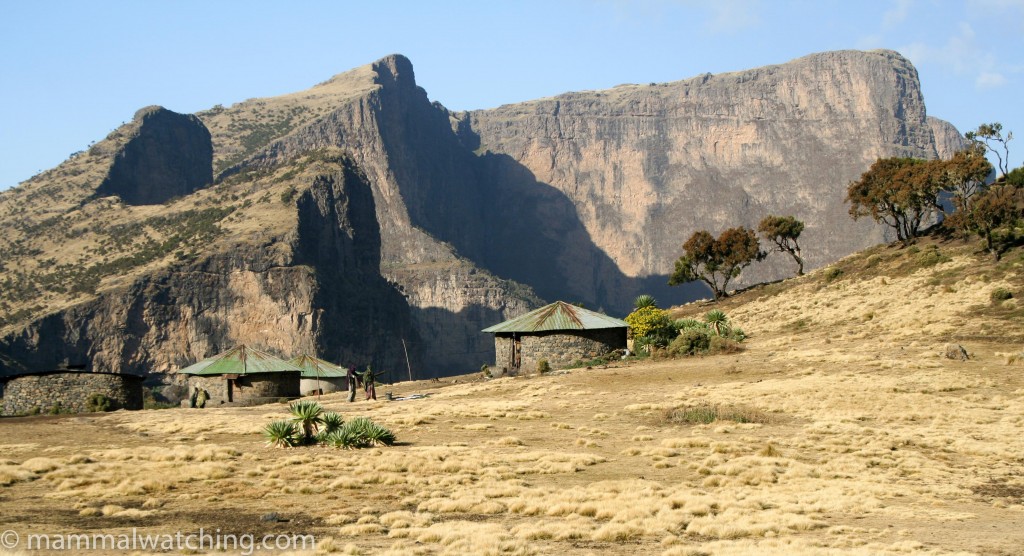 Chenek Camp is up at about 3600 metres. Apparently November through January is peak season for trekking because the skies tend to be clearer. Nevertheless, on my first night I had the camp to myself.  We camped basically and I ate something tasty in my tent.  The second night, my team decided to lay on the red carpet treatment.  A table cloth and candles appeared and the chef put on his combat gear.

Much to my shame this was also the moment when a dozen rugged cross country hikers arrived.  I lost count how many times I heard “Ha ha.. Hilton on the road” as they marched past. Kill me now. 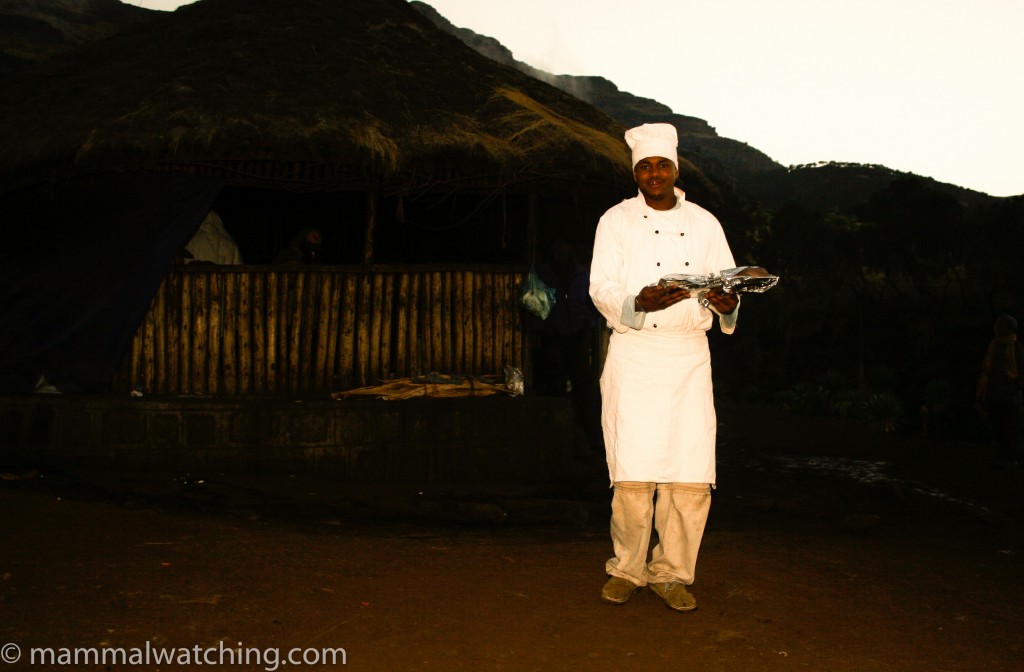 Hilton on the road

All was forgiven though the next morning. It was hard to think about much other than the view. 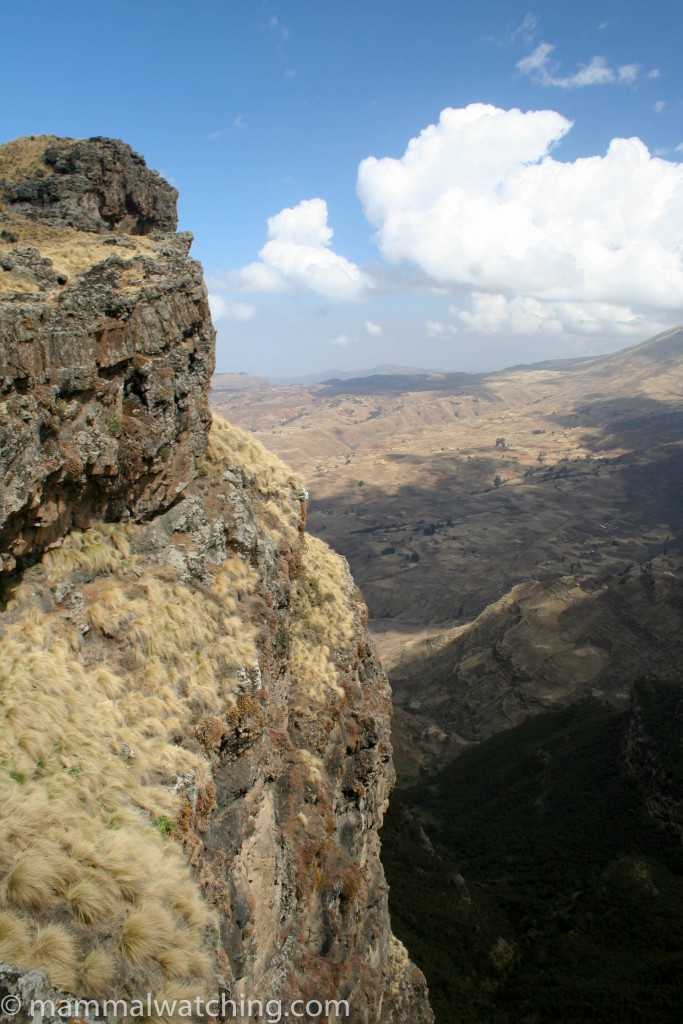 The camp has an extraordinary setting, perched on a plateau covered in giant ancient plants with cliffs dropping away in front of the camp, and more cliffs rising up around it. 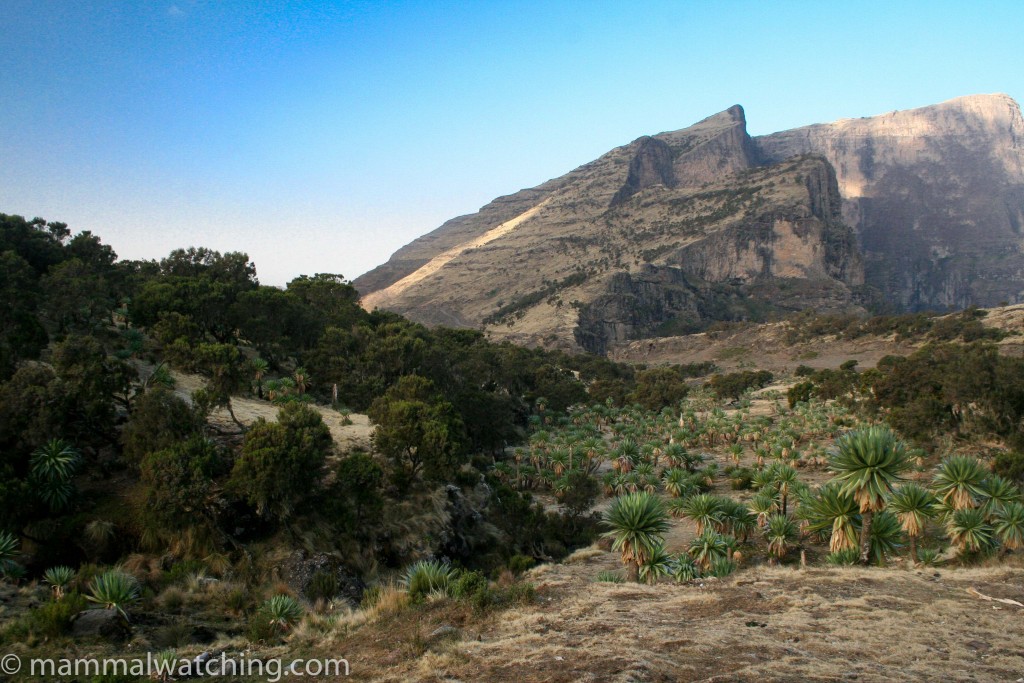 Gelada Baboons were common around the campsite and oblivious of Homo sapiens even the two Homo sapien italianos who arrived the next morning and were loudly dressed and even more loudly voiced. We saw plenty of Baboons on the drive in and out too. 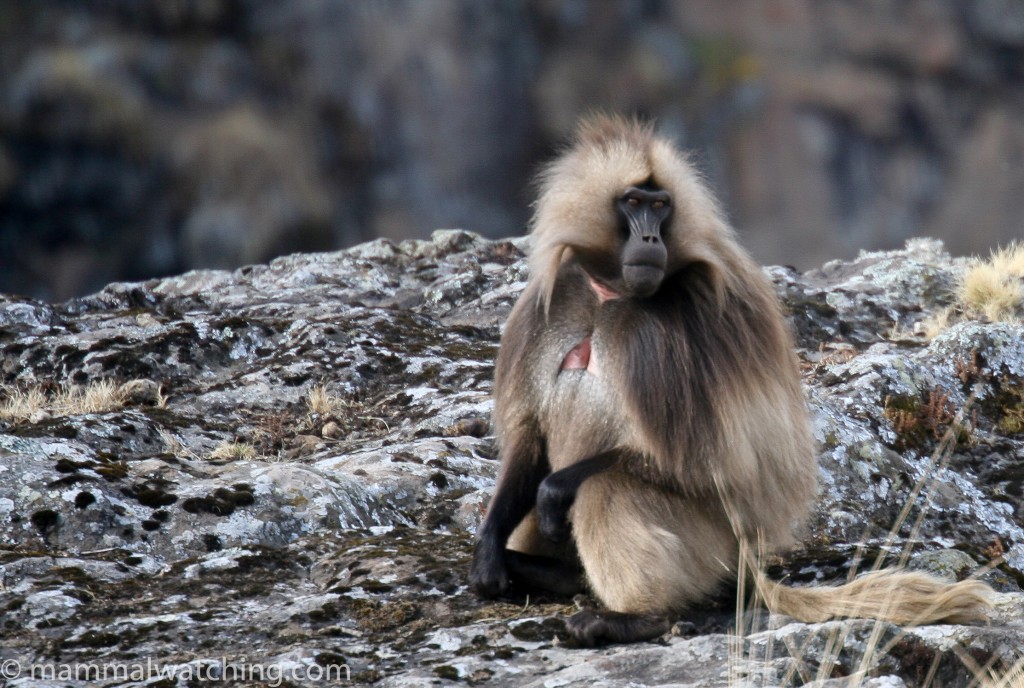 Walia Ibex were also quite easy to spot. A dozen or so were on the cliffs below camp and we saw more the next day when we hiked up the nearest mountain. They were harder to get close to, mainly because they were hanging out on the cliffs where there were no paths. But one wandered through camp on my second afternoon and I got within 20 metres of it. 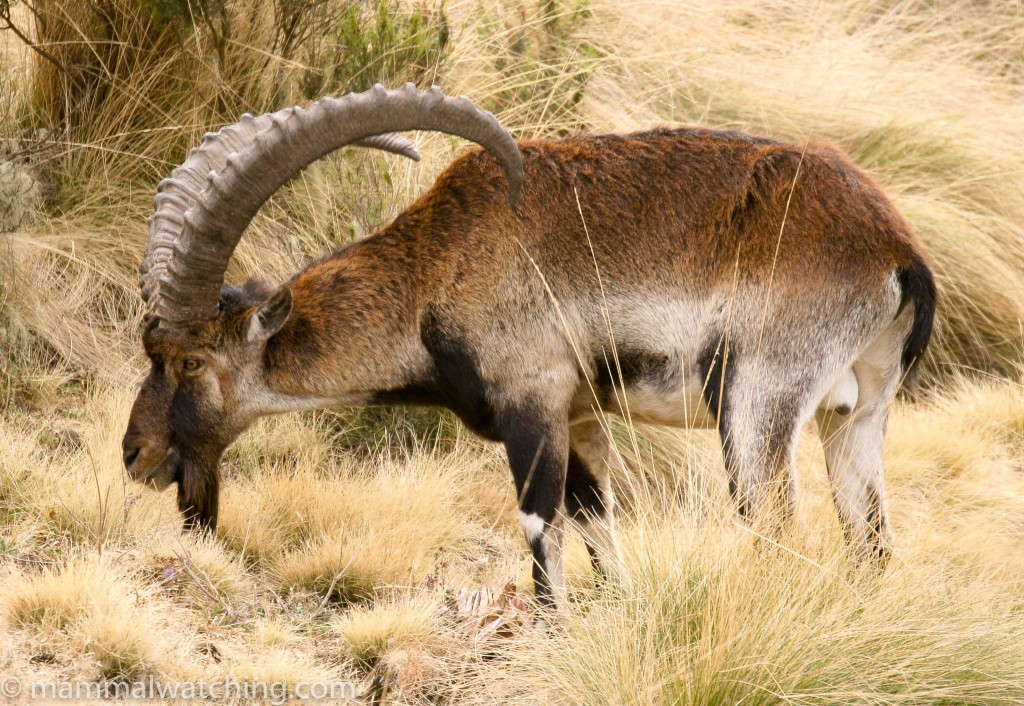 There were also good numbers of rodents around Chenek camp and along the creek up the valley. We didn’t see any Giant Mole Rats although there were plenty of fresh mounds. 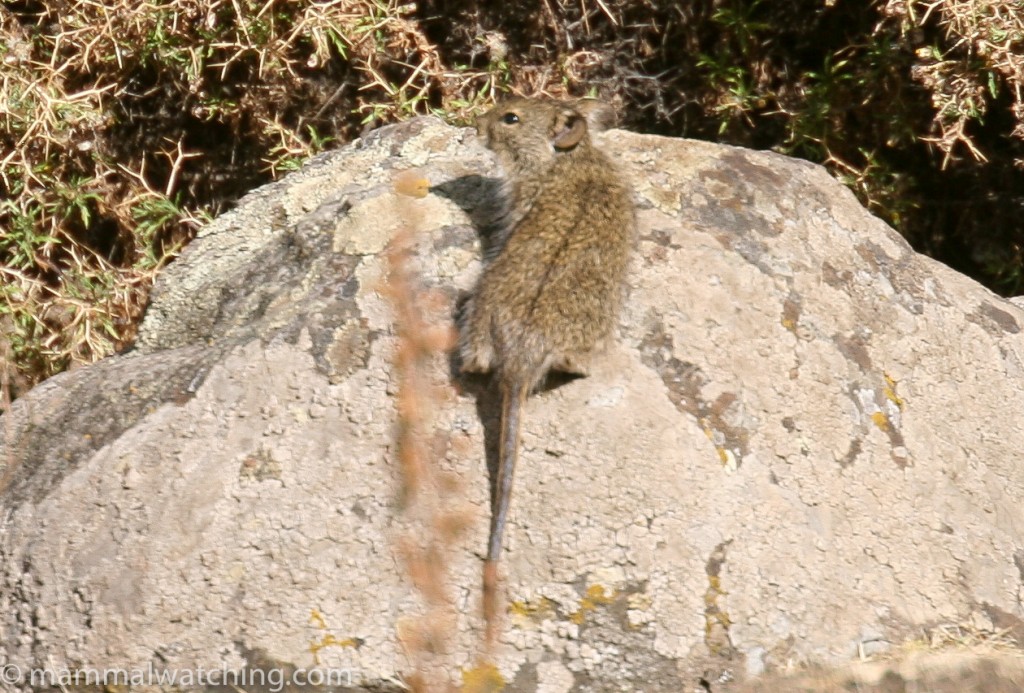 But I did see at least two rodent species. Abyssinian Grass Rats (Arvacanthis abyssinicus) were common. 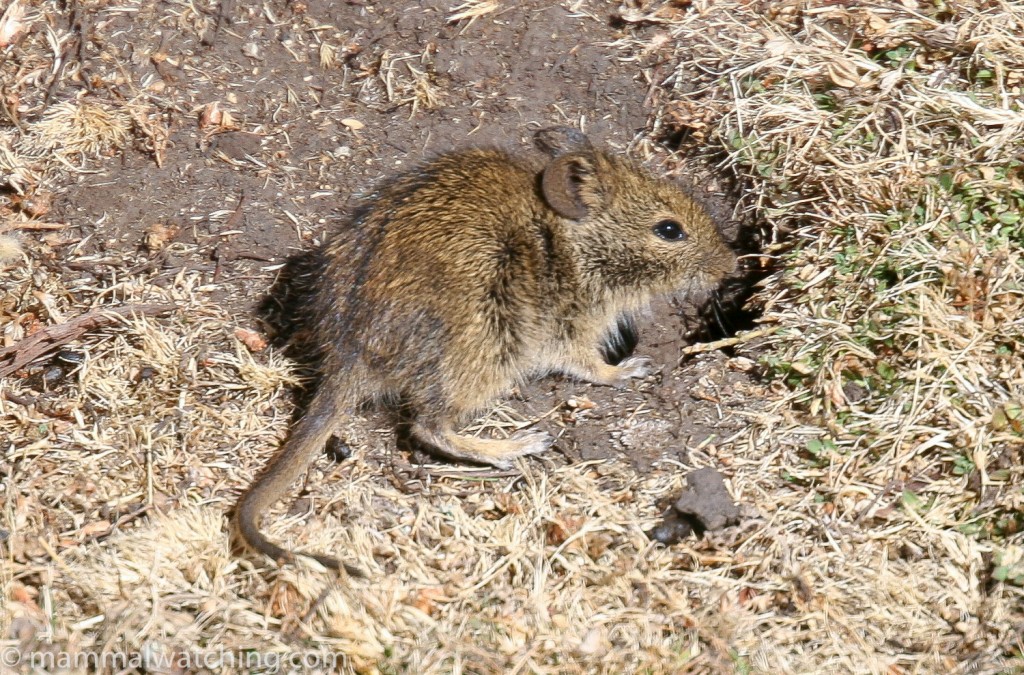 The other animals I am pretty sure I saw were Typical Vlei Rats (Otomys typus). I was told the best way to separate them is that the Otomys lacks the back stripe. 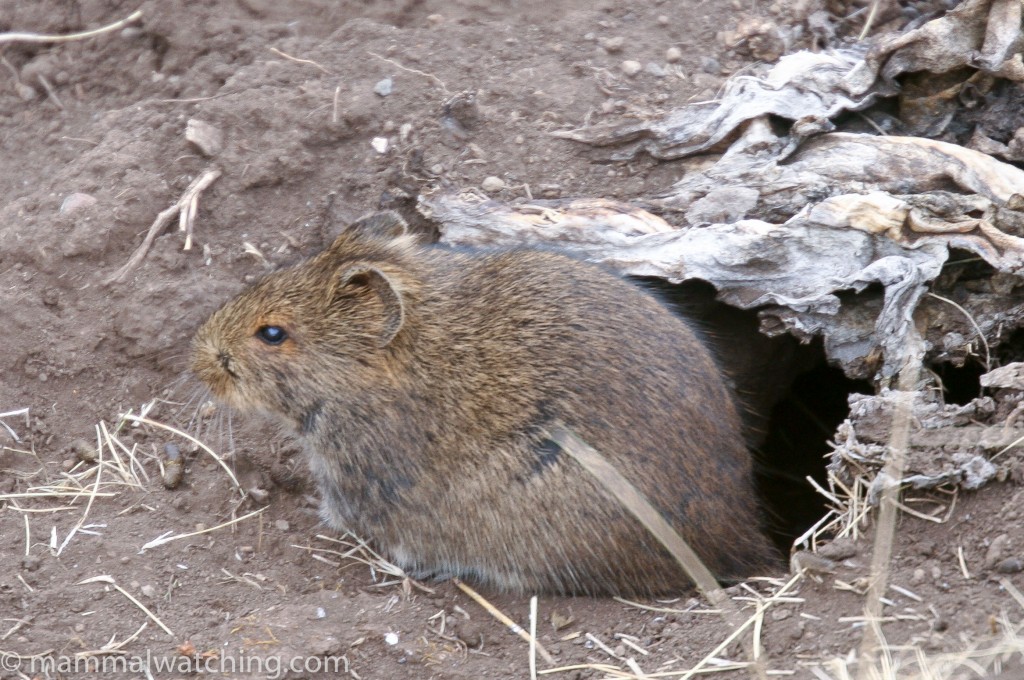 There are 40 or so Ethiopian Wolves left in the park and they are not seen all that often. Golden Jackals are quite common after dark, but I didn’t go looking. Other rodents include an undescribed Lophuromys species that I am not sure I saw.

Klipspringers and Rock Hyraxes can be tracked down quite easily in the right area and Leopards are occasionally seen too. I saw one microbat flying around Chenek camp on my second evening. It got cold pretty quickly so I cannot imagine it was airborne for all that long. 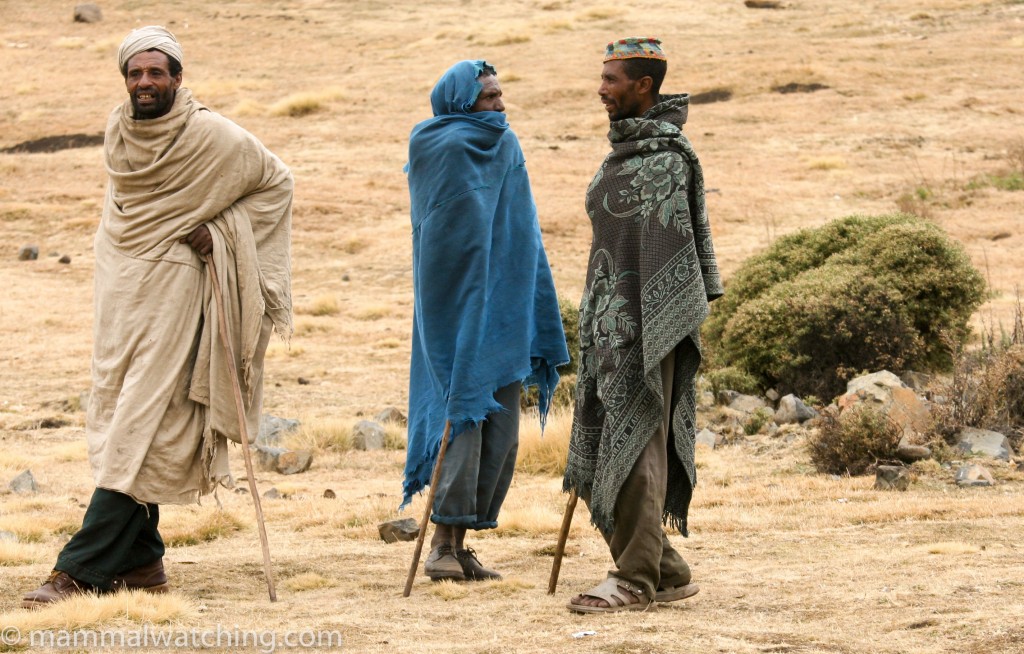 A group of researchers in the UK have produced a comprehensive report on Simien Wolves and other fauna. 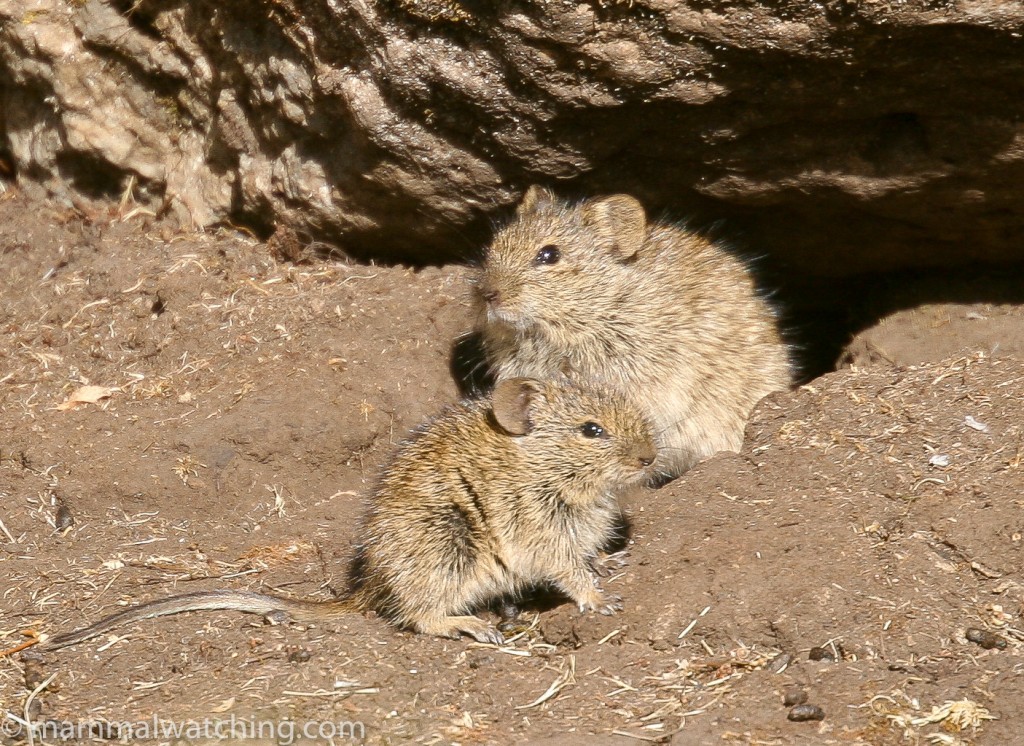 And of course if you tire of the mammals then the scenery is quite distracting…. 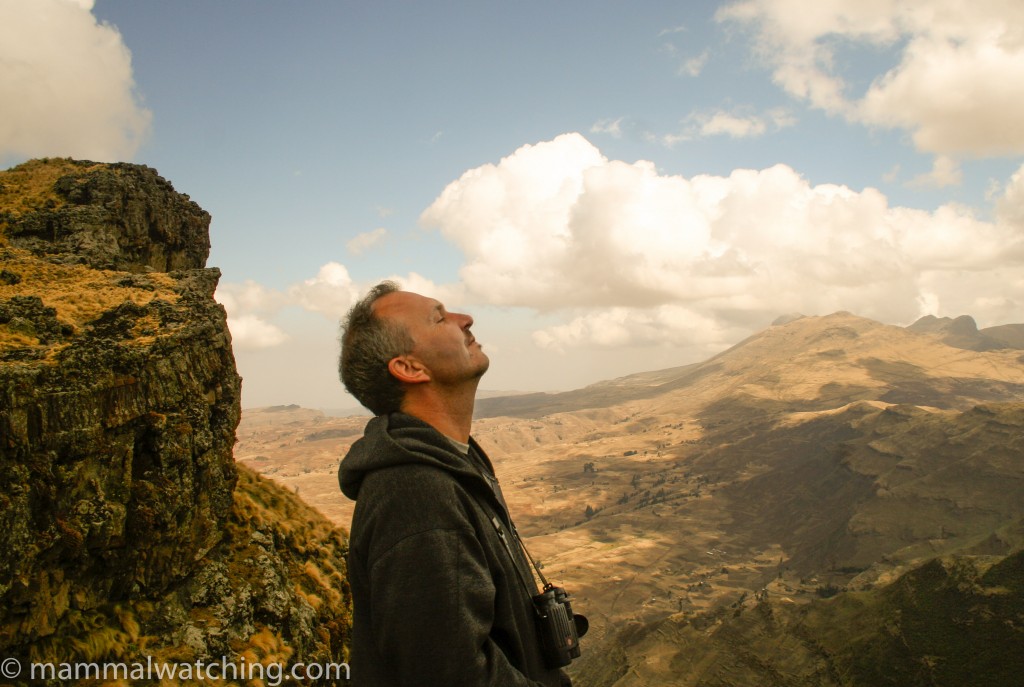