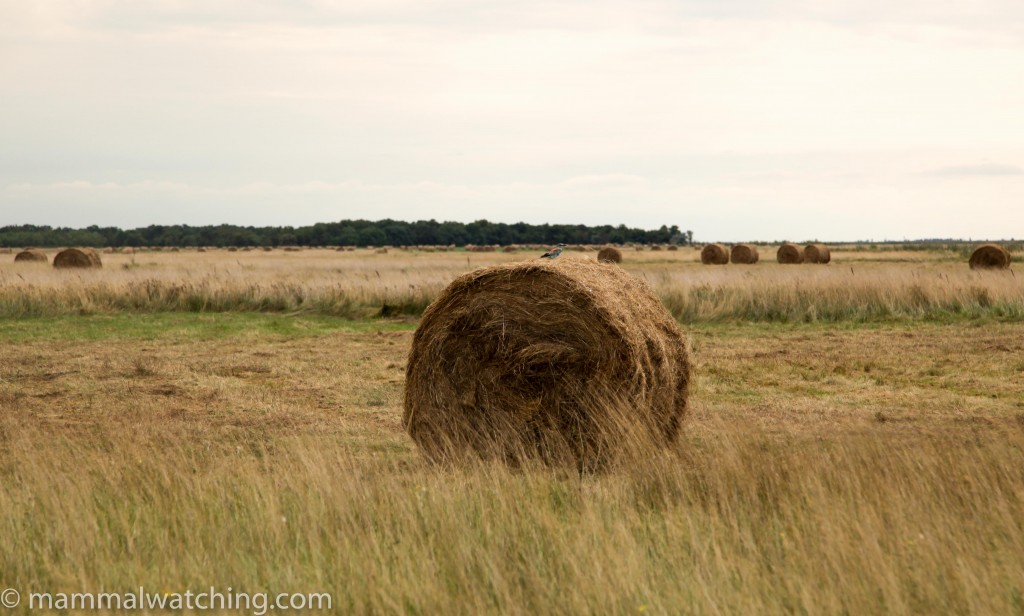 In summer 2010 I was looking for somewhere in Europe to take my kids – Patrick and Katy – for a few days mammal chasing and I thought Hungary might be the go when I learned there was a decent population of Greater Noctules there along with several other animals I wanted to see. So a quick google search for “ecotour hungary” led me, not surprisingly, to ecotours.hu. Writing to them was serendipitous indeed: my email found its way to Balazs Szigeti, one of the partners and principal guides. Turns out he is one of the growing number of ecotour leaders who can see the potential in promoting mammal watching. Moreover, when I wrote Balazs happened to be on a tour with Dominic Couzens, the British author and naturalist. Dominic, I was flattered to hear, had seen this site and so Balazs was persuaded to take me and the kids on a custom tour looking for some of the many Hungarian mammals I wanted to see. 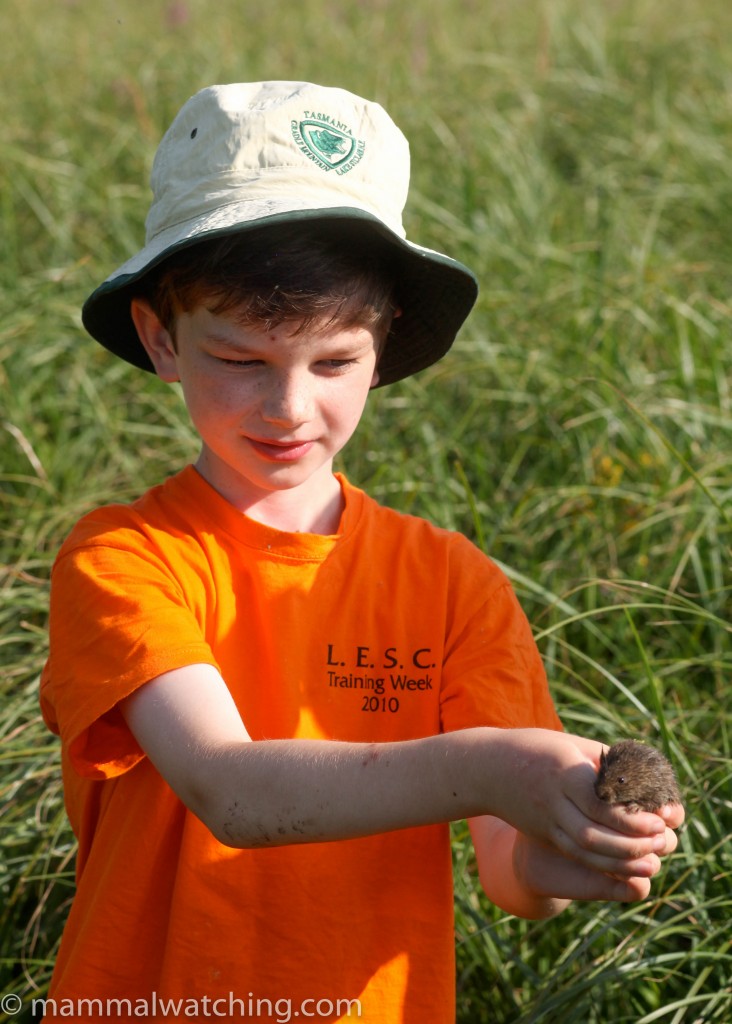 Patrick and a Root Vole

Hungary has a lot of potential I think. There are some interesting – and difficult to find – species there, very nice forest and wetlands, and its a cheap place to get to and travel around. If I got tired of looking at the wildlife I could admire the scenery of the thriving sex industry (or try to distract my 9 year old son from admiring the scenery: every lay-by had its own resident female in full – if scanty – breeding plumage). 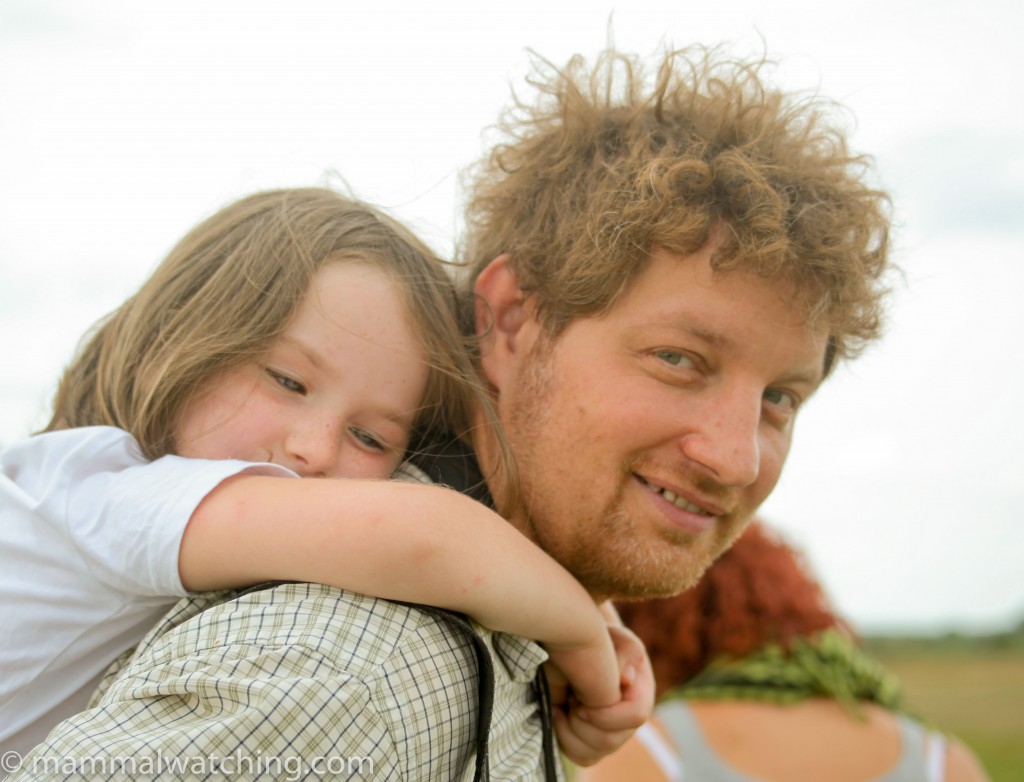 Hungary is also a useful size. It is small enough to cross in a day, so no site is very far from the next. While Balazs knows most of the mammalogists. And he knows people who know the rest. So with time he might be able to track down every one of Hungary’s mammals (other than perhaps a Lynx).

We arrived late on Thursday evening into Budapest and headed straight to Little Balaton, a couple of hours west, speeding past a Northern White-breasted Hedgehog en route.

The next morning we met with Gyozo Horvath and his team who were trapping for Root (or Tundra) Voles in the wetlands. They had been generous enough to schedule their survey around my visit. 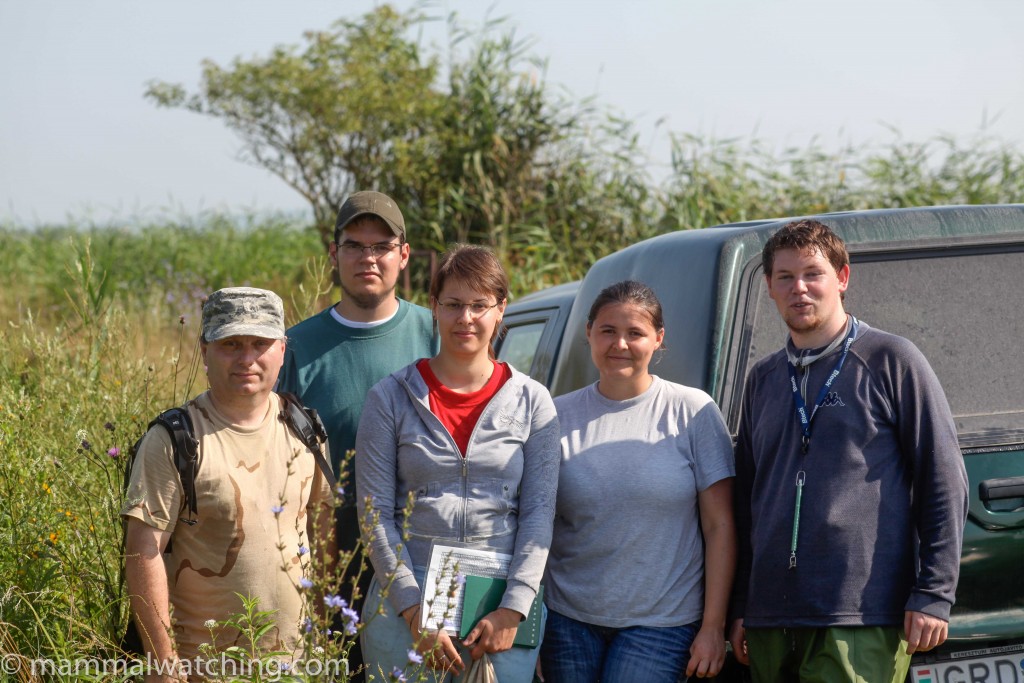 Gyozo Horvath and his research team

In a couple of hours trap checking we caught several Root Voles, which were remarkably placid in the hand. 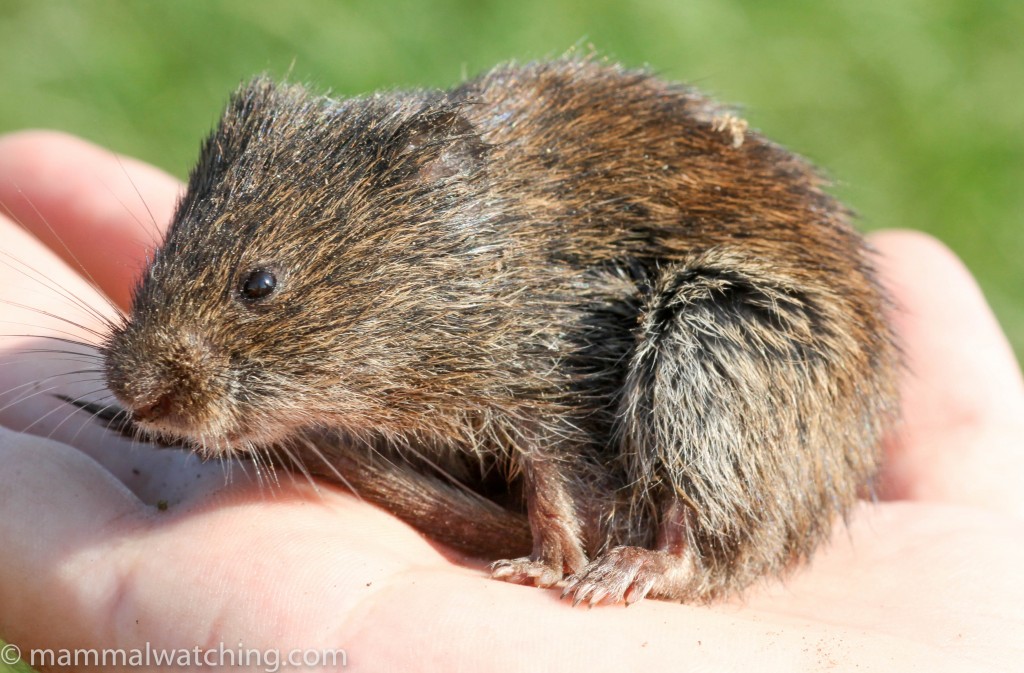 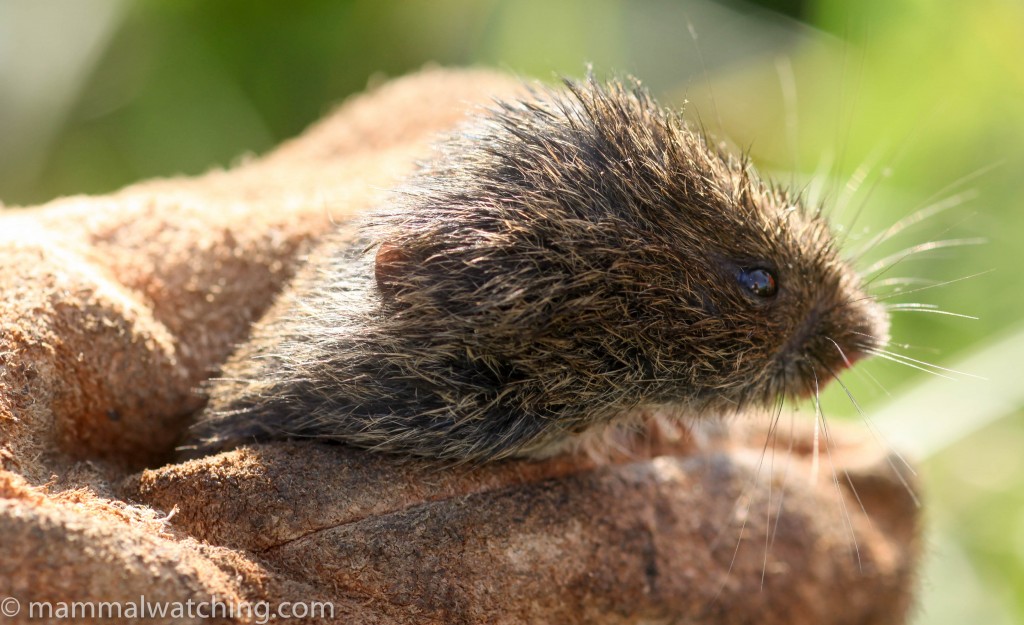 and a Field Vole. 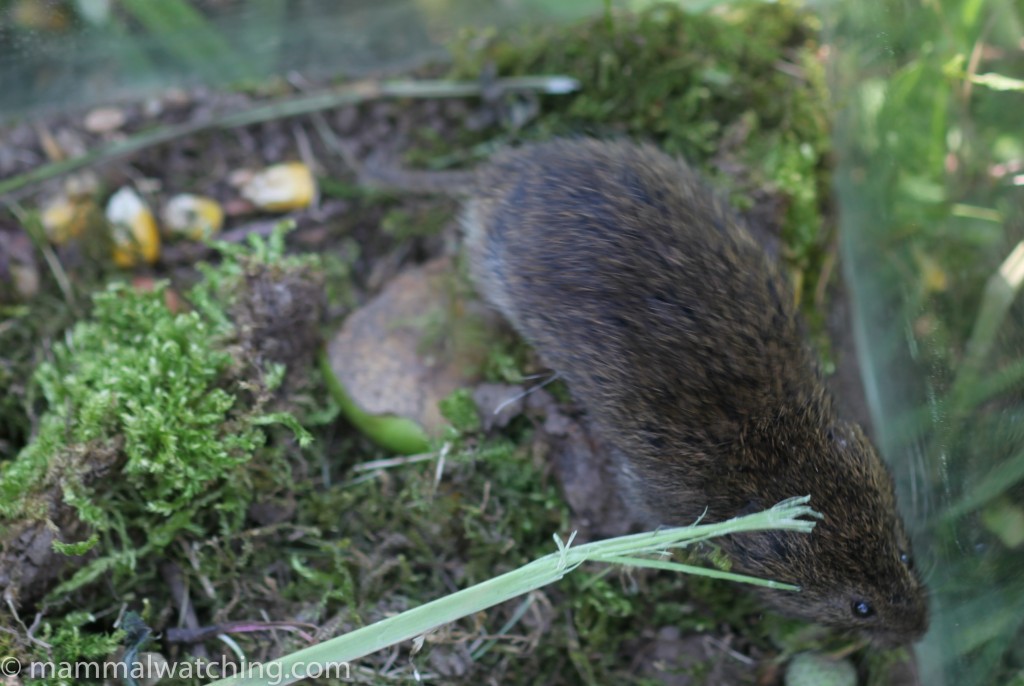 And the final capture was a beautiful Striped-field Mouse (a second lifer for me). Two new species before breakfast. Things were looking good. 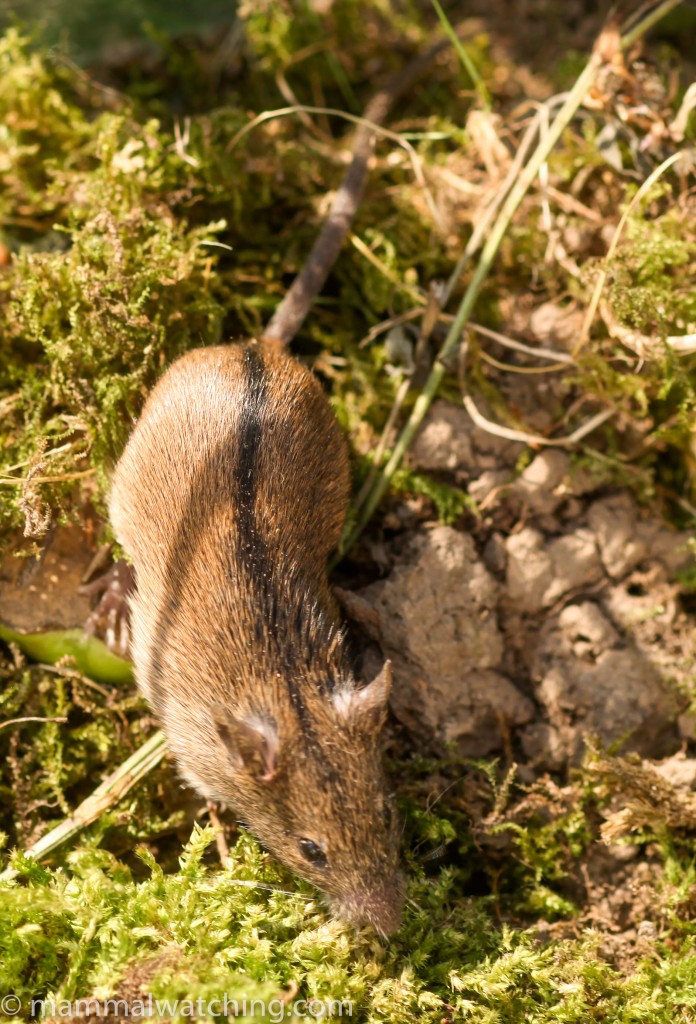 After brekky we headed south for 3 hours or so to the Gemenc region where we met another of Balazs’s friends, this time a bat researcher.

We battled through mosquitoes to take a look at several hundred Pond Bats, one of the rarest bats living in Europe, roosting under a road bridge alongside about a thousand Soprano Pipistrelles. The bright sunlight made photography very difficult.

Pond Bats, Myotis dasycneme, believe it or not!

From there we drove to the Bukk Mountains to spend the night near Eger in the Nomad Hotel (a great place to stay or camp), where I met up with Toulon-based Jean-Michel Bompar and his wife Mary who had also decided to take a vacation in Hungary. 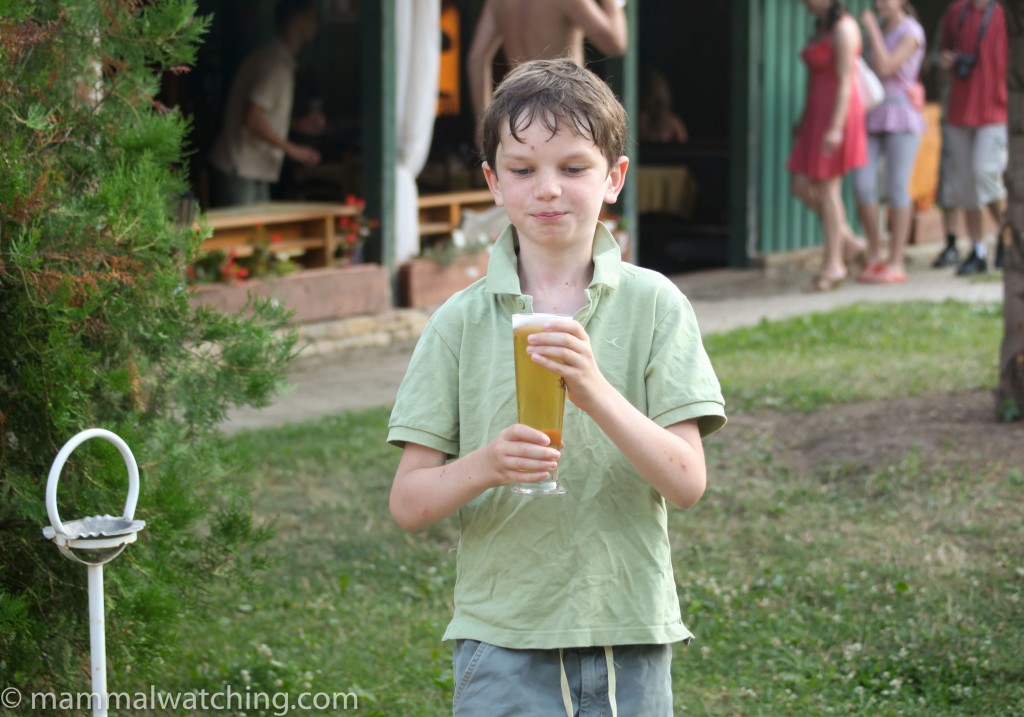 Proud but careful: Patrick buys me a beer for the first time … but not the last

After a swim and dinner we drove to the Bukk National Park and met another of Balazs’s bat researcher buddies. A thunderstorm kicked off as we arrived at the study site but the rain stopped after an hour and we set up a mist net once we saw Daubenton’s Bats skimming the small pond in the small patch of primary Beech forest. I was sceptical that we would catch anything but within 20 minutes we caught a superb Greater Noctule: Europe’s largest bat and one of the rarest and least understood. It was closely followed by a much smaller Common Noctule. I cannot imagine I will have many more opportunities in Europe to see four lifers in a day. 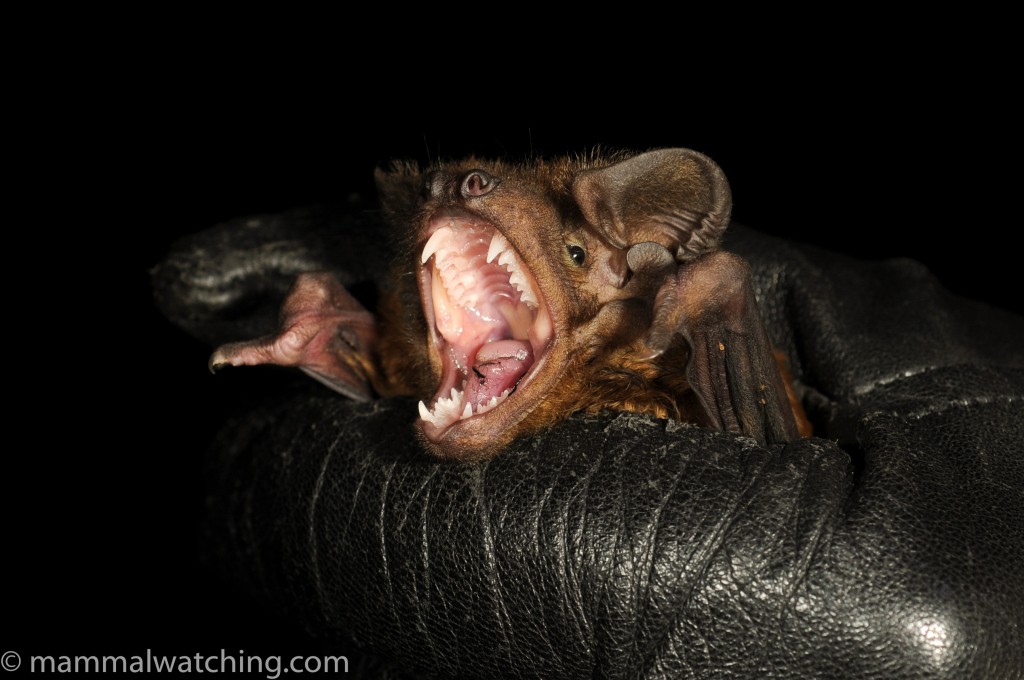 The next morning we had a rendezvous with a researcher working on Lesser Mole-rats at an airbase near Hortobagy National Park. The study site was interesting in itself. Kunmadaras Airbase is a soviet military airport that was abandoned in 1992 but was once  home to 5000 people. It is impressive how quickly nature takes over. 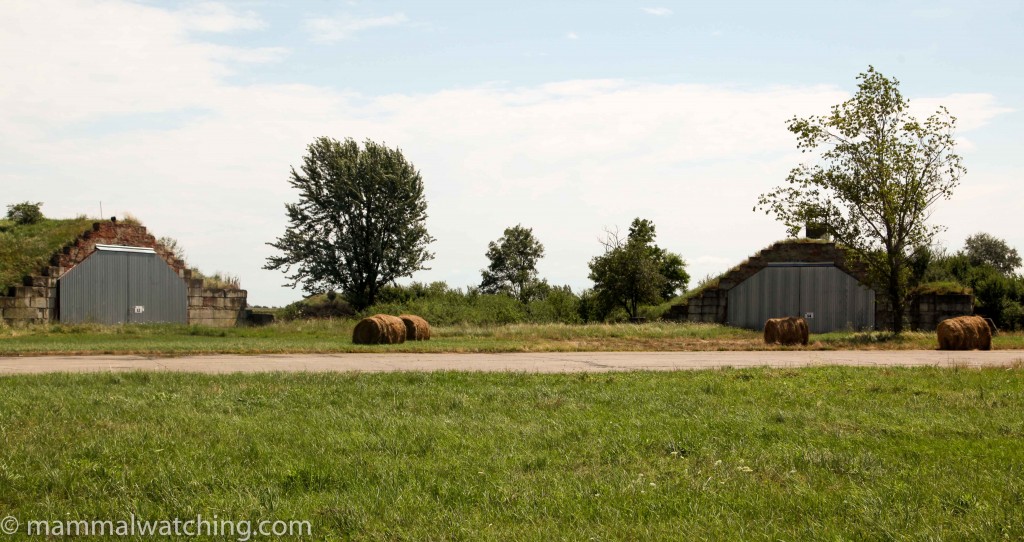 There are at least three Mole-rat species in Hungary although the taxonomy is evolving quickly as more and more species are discovered: they may look the same but the chromosomes are different.

Mole-rats are extraordinary animals, having no eyes to speak of (they have something similar but covered by skin) and spending their entire lives underground. They never venture above the surface voluntarily and have no natural predators. 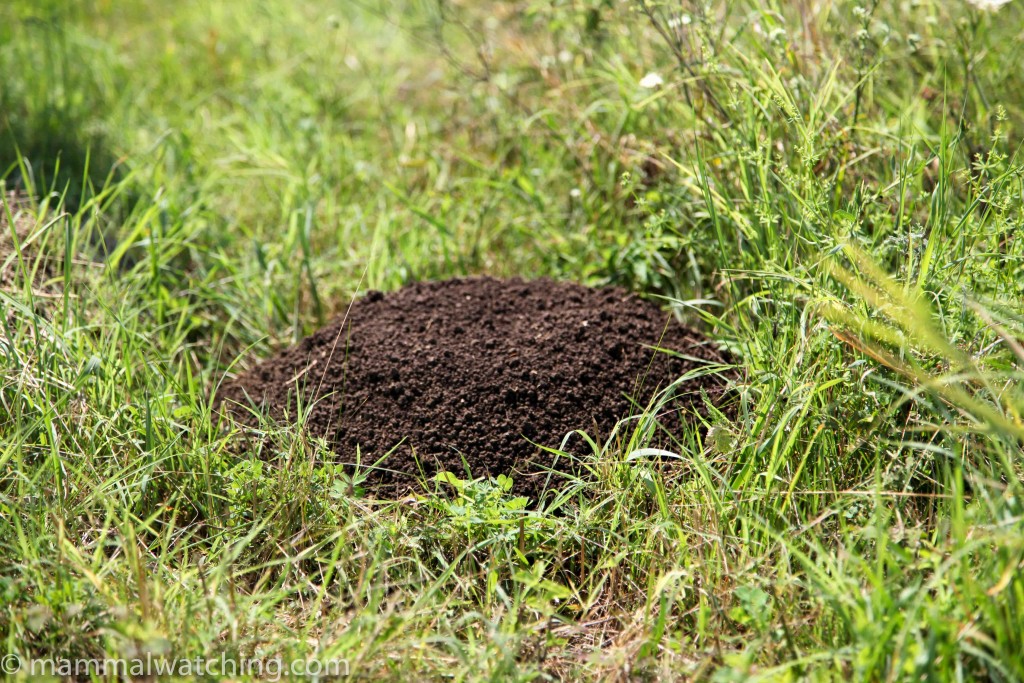 They are, essentially, a stomach with a hole at either end and feet attached. I’ve never seen anything like them, except – one time – for a few people at an all you can eat buffet in Las Vegas.

Mole-rats don’t enter traps readily either, so to catch them you need to partially excavate their tunnel system, wait for them to start repairing the damage and dig them out. 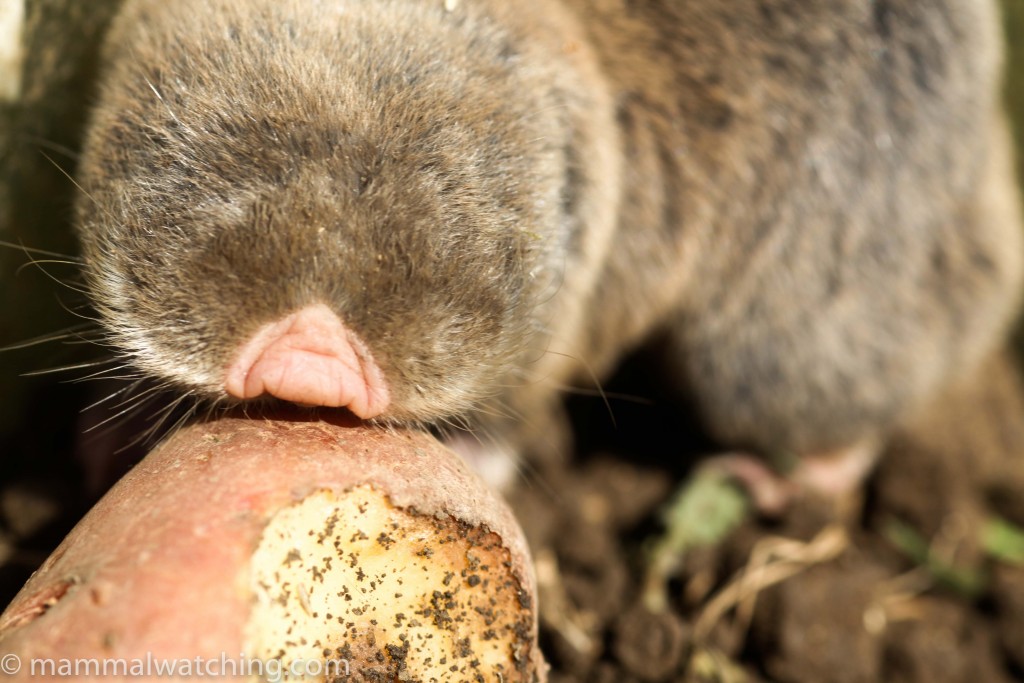 There was a freshly caught animal waiting for us when we arrived. One of the Lesser Mole-rat superspecies – as the species officially known as Spalax leucodon is now thought to be. This species which will probably be described as Spalax (leucodon) hungaricus. 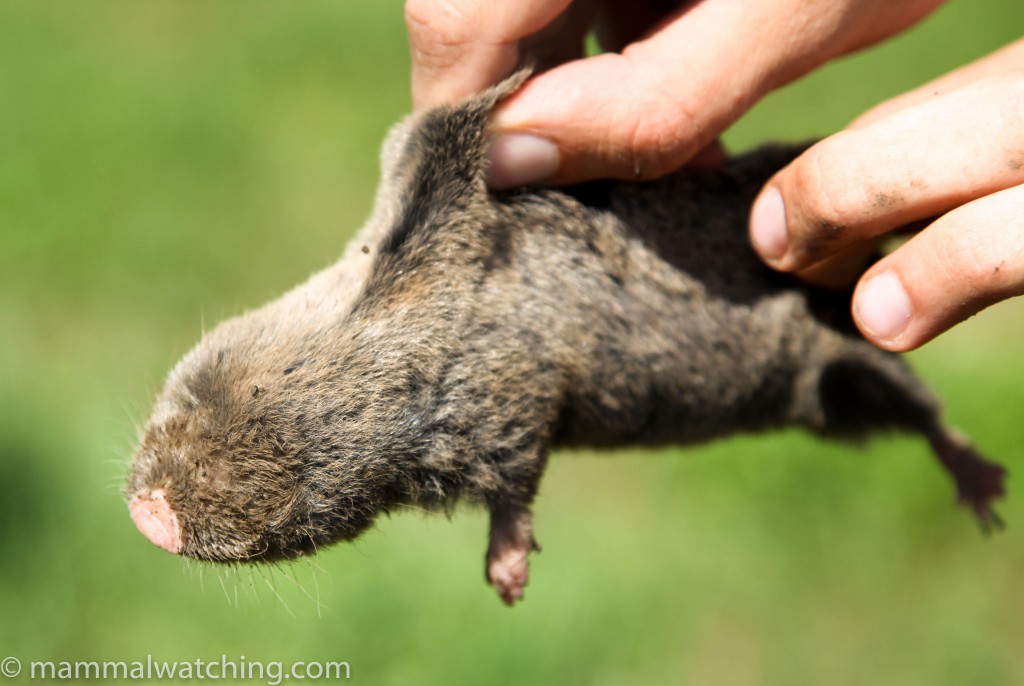 What a superb animal. As you can see from the number of photos here I was particularly excited – maybe because they superficially resemble a Marsupial Mole, almost certainly the most difficult mammal to observe in Australia and one I would dearly love to see in the wild. 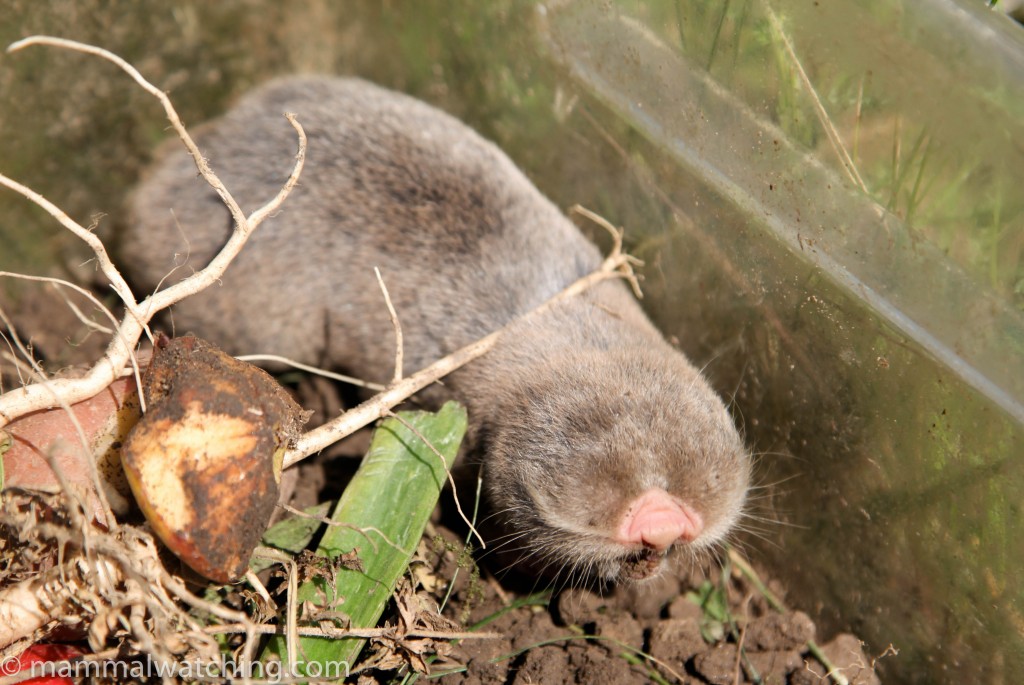 The animal we saw weighted about 200 grams, but the species in Transylvania gets up to 600 grams! I have got to go see it.

We spent the rest of the afternoon in the strictly protected zone of Hortobagy National Park, where 150 Przewalski’s Horses are living wild after being (re)introduced to a large enclosure. I personally didn’t feel happy about adding them to my life list but in many ways they were wild animals (I will need to see them in Mongolia if I want to tick them I think ).

The taxonomy of Przewalksi’s Horse is still being debated. Some see them as a unique species, others as a subspecies of horse, and some don’t even view them as having subspecies status. The IUCN redlist lists them as Equus ferus prezwalski, the only surviving member of Equus ferus. They certainly looked different to E. caballus and we spent half an hour watching a herd of 60 or so that approached us quite closely but are apparently aggressive from time to time. 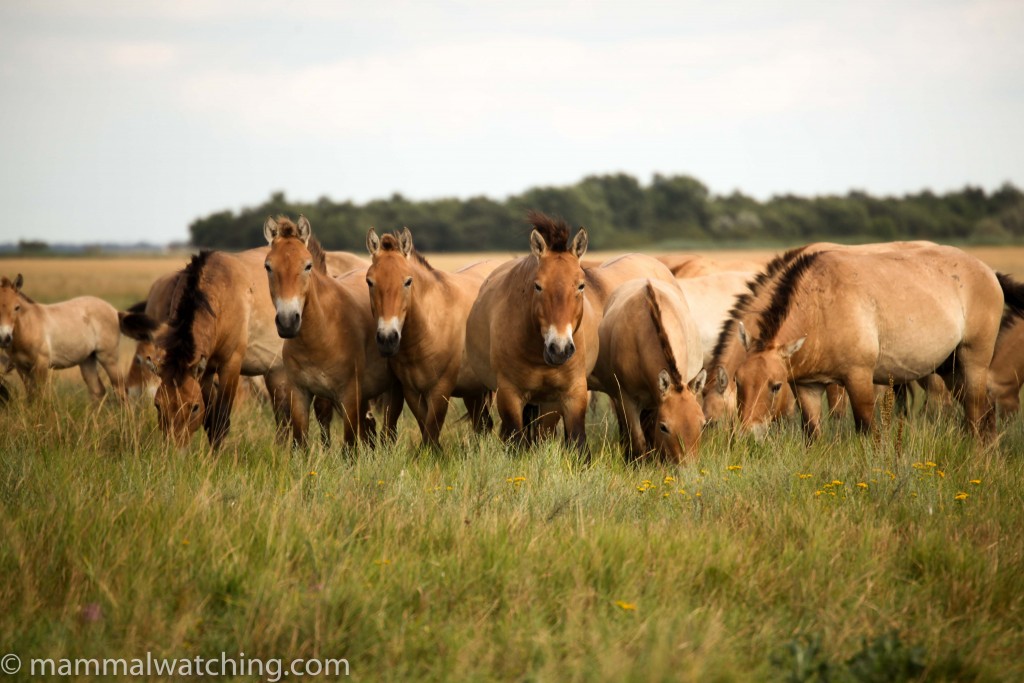 On our third day the hot weather broke and we drove a couple of hundred kilometres in the rain to a gorge on the the Slovakian/Hungarian border to visit a Parti-coloured Bat roost in the roof of a cafe (the location of which I promised not to mention) . Unfortunately there were only a few Serotines (I think) at home.

Balazs knew of another Parti-coloured roost in Hungary’s Bukk mountains but the bats leave in mid-July each year and I just missed them. Lynxes are occasionally reported from the Hungary/Slovak border.

We spent our last 24 hours in Ocsa. European Sousliks are widespread across Hungary but not so easy to see without local knowledge (as Jean Michel will testify from his experiences failing to see them on a wild Souslik chase around Hortobagy). But Balazs knows many sites and took us to one of the easiest (if you arrive by plane): a soccer pitch sized patch of grass about 200 metres in front of Budapest Airport. Despite the drizzle we saw 10 or more animals in an hour there. 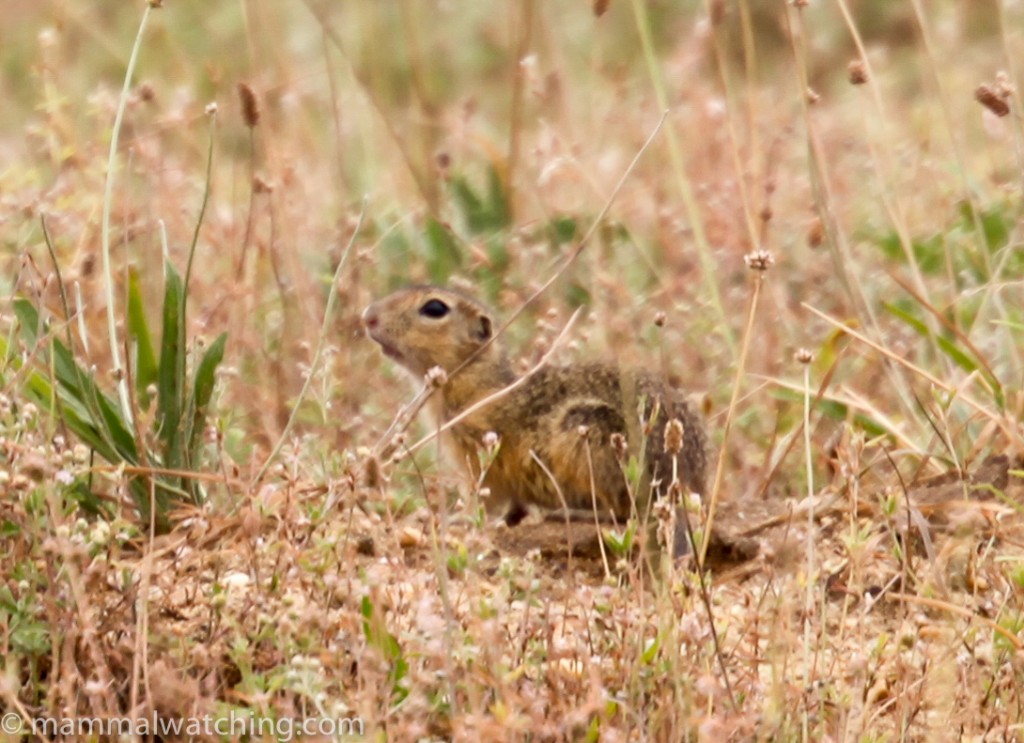 We had arranged to meet someone from the university for our last night to trap shrews around Ocsa. He changed his plans but Balazs and I pressed on and I was introduced to a new low-tech trap: a litre plastic water bottle with the neck cut off, baited with oily fish and sunk into the earth until the top is level with the ground. This trap is probably too shallow to catch rodents but works very well for shrews.

In a few hours we caught my first (live) Pygmy Shrew and also a Common Shrew. It is unfortunate we didn’t have more traps as the peat bog there is home also to both European and Miller’s Water Shrews, as well as Lesser and Bi-coloured White-toothed Shrew. 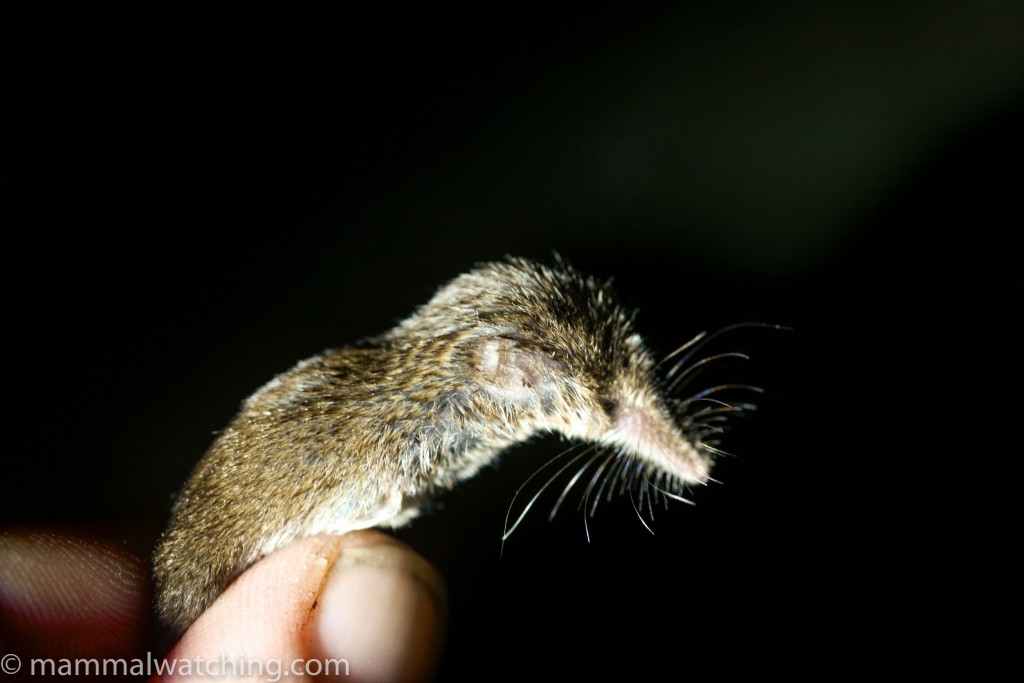 So a successful trip for me and my kids. A very big thank you to Balazs for his excellent organisation and help, and also for tolerating my children so well. He did a great job and was fabulous company to travel with. Mammal discussions aside, we enjoyed swapping Ali G and Eddie Izzard quotes. I am looking forward to returning as soon as I can.

Given how short our trip was we didn’t miss a great deal we’d been targetting, other than some of the shrew species we had been hoping to see in Ocsa. There are several other mammals I would like to look for when I go back including Common Hamster (rather uncommon apparently though in good hamster years they can be prolific and Jean-Michel Bompar saw one in Slovakia as he was heading home) and Steppe Polecat (again quite rare). Balazs also knows somebody working on Southern Birch Mice plus there are at least another two Mole-rat species to see . Other nice mammals include many species of bats (in swarming caves they can catch 18 species in an evening), Forest Dormouse, Beech Marten, European Beaver and Wild Cat.