I was in Jerusalem last weekend for a night. Indian Porcupines are easy to see at the Jerusalem Bird Observatory in the middle of the city (quite well signposted between the Knesset and the Supreme Court). They usually feed in front of the bird hide in this tiny reserve just after dusk and I saw at least 2 animals here, along with a Southern White-breasted Hedgehog (Erinaceus concolor). Many thanks to Ohr Tregger, Jonathan Meyrav and Amir Balaban, the manager of the reserve, for their help.

Mountain Gazelles are quite common in Israel and if you are in Jerusalem they are easy to find in the Valley of the Gazelles, a small patch of scrub that has been isolated in the middle of the city, still home to a population of gazelles. I asked the taxi driver to drop me off at the busy Pat Junction, at the southern end of the valley, early in the morning. I found a hole in the fence and wandered through the bush, flusing 3 Gazelles in the middle of the grassland. There used to be 20 or so animals living here, but someone told me that fewer than 5 remain. 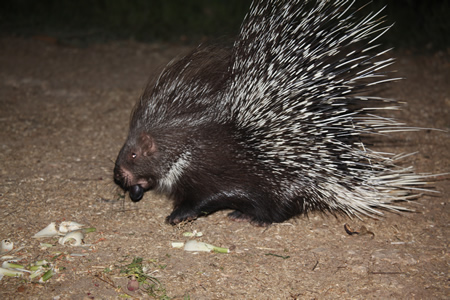