Rodents in the Red Centre 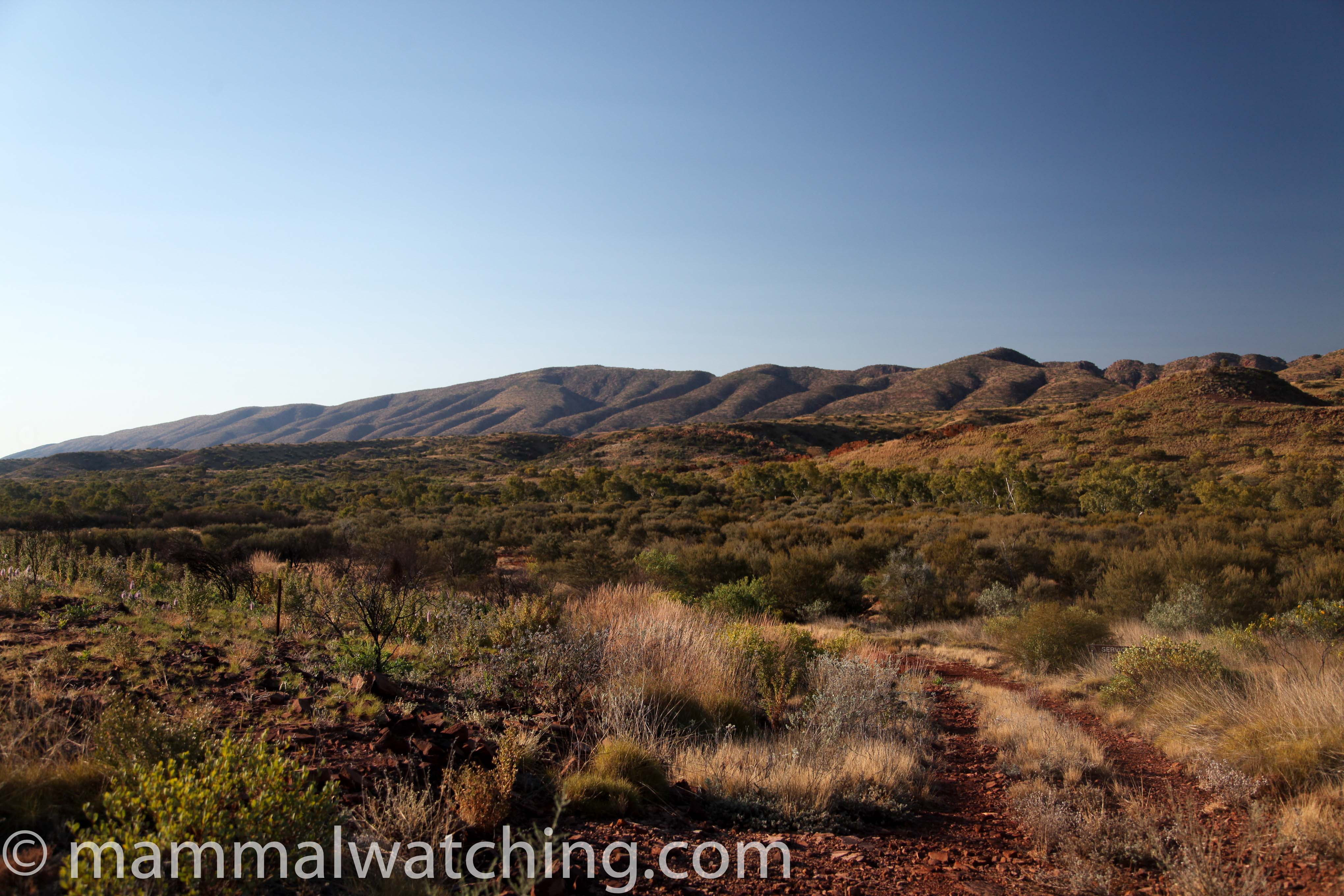 When I last went to Old Andado Station, back in 2005, I was with my 4 year old son. We’d just seen Ayers Rock and he was using Ayers as a superlative. We named the bone chattering drive to Old Andado “Ayers Bumpy Road”. It was much better in October 2011 (though I remember last time the bumpiness didn’t perturb Patrick – he spent the entire 6 hour drive in total silence, quietly absorbed in making a variety of paper aeroplanes from his book of special designs).

I was heading back to Old Andado to look for some of the small desert mammals that I had failed to see last time. In particular after very good rains last year there were reports of large numbers of Long-haired (Plague) Rats and Plains Rats in the area.

It is 300km to Old Andado from Alice. I saw my first dead rodents after about 200km. There were several Long-haired Rats dead on the track, presumably dropped by raptors. 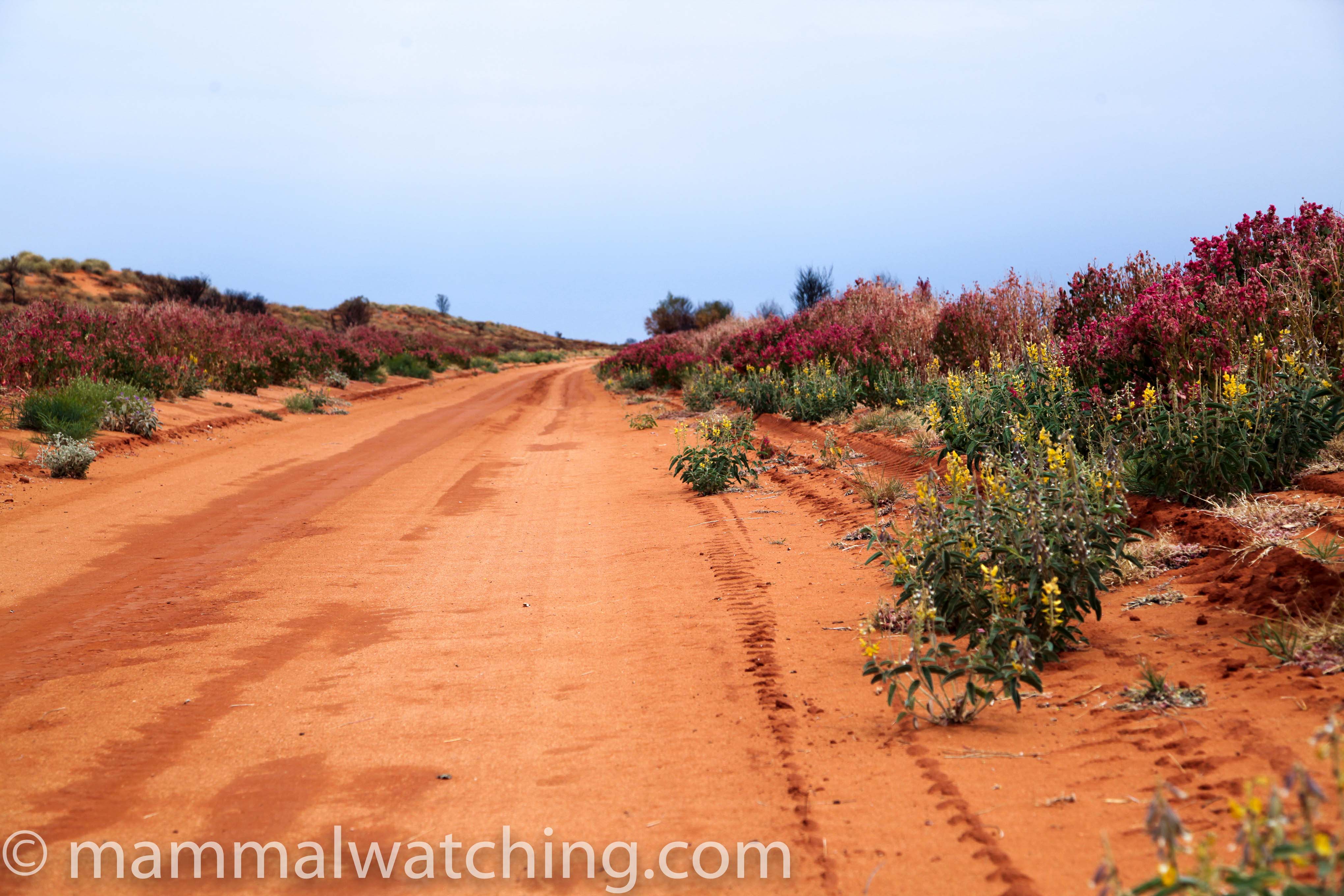 The Mac Clark Conservation Reserve is about 40 km before Old Andado. Set up to protect a stand of rare Acacia Peuce trees, the signs there talk about a colony of Plains Mice that irrupt after good rain. There was plenty of signs of activity but no animals at 4pm, and I planned to return that night. 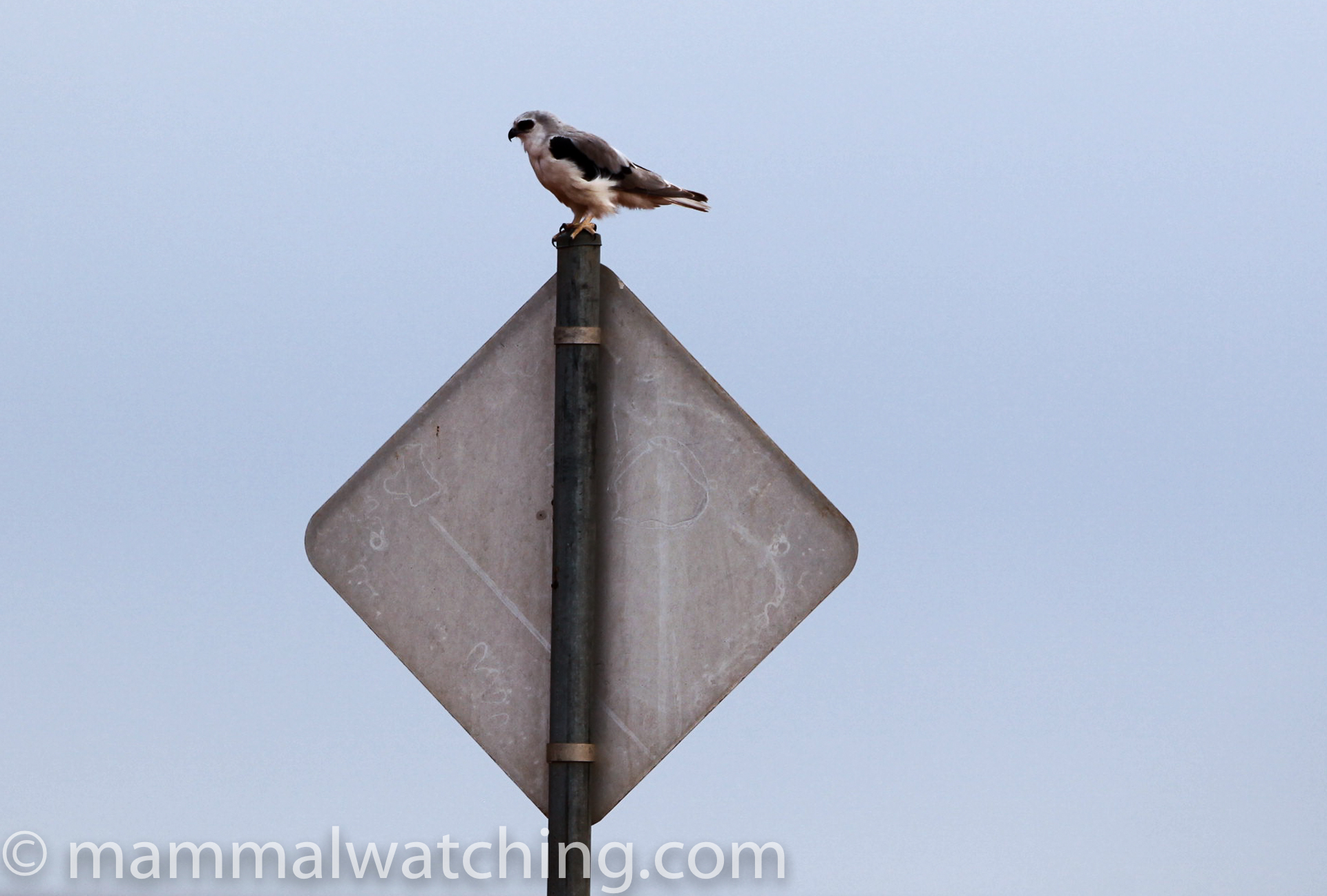 Just past the turn off to the reserve I saw my first Letter Winged Kite (the world’s only nocturnal raptor and a sure sign that there were lots of rodents around).

I also saw the first of several Dingos. 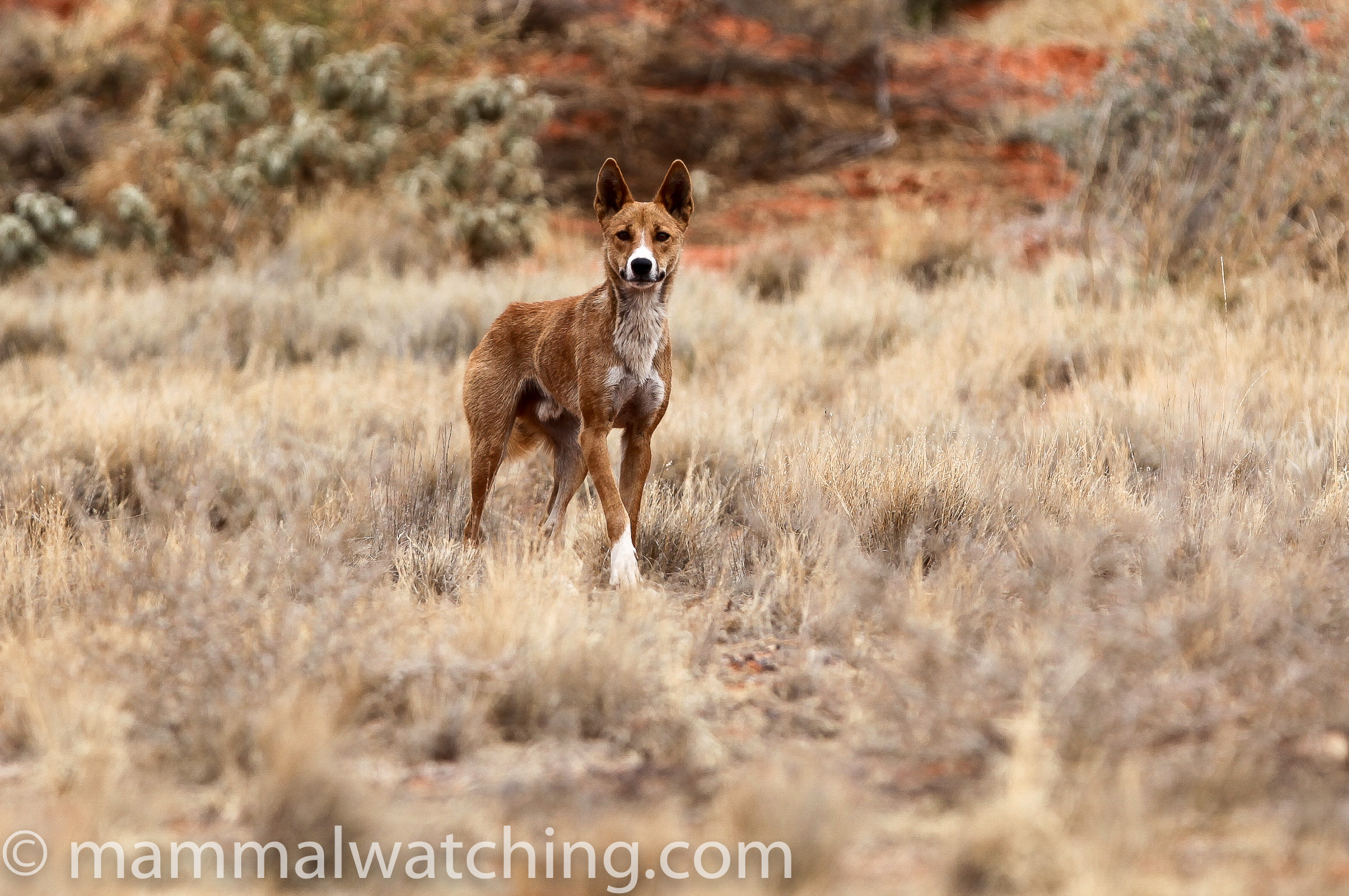 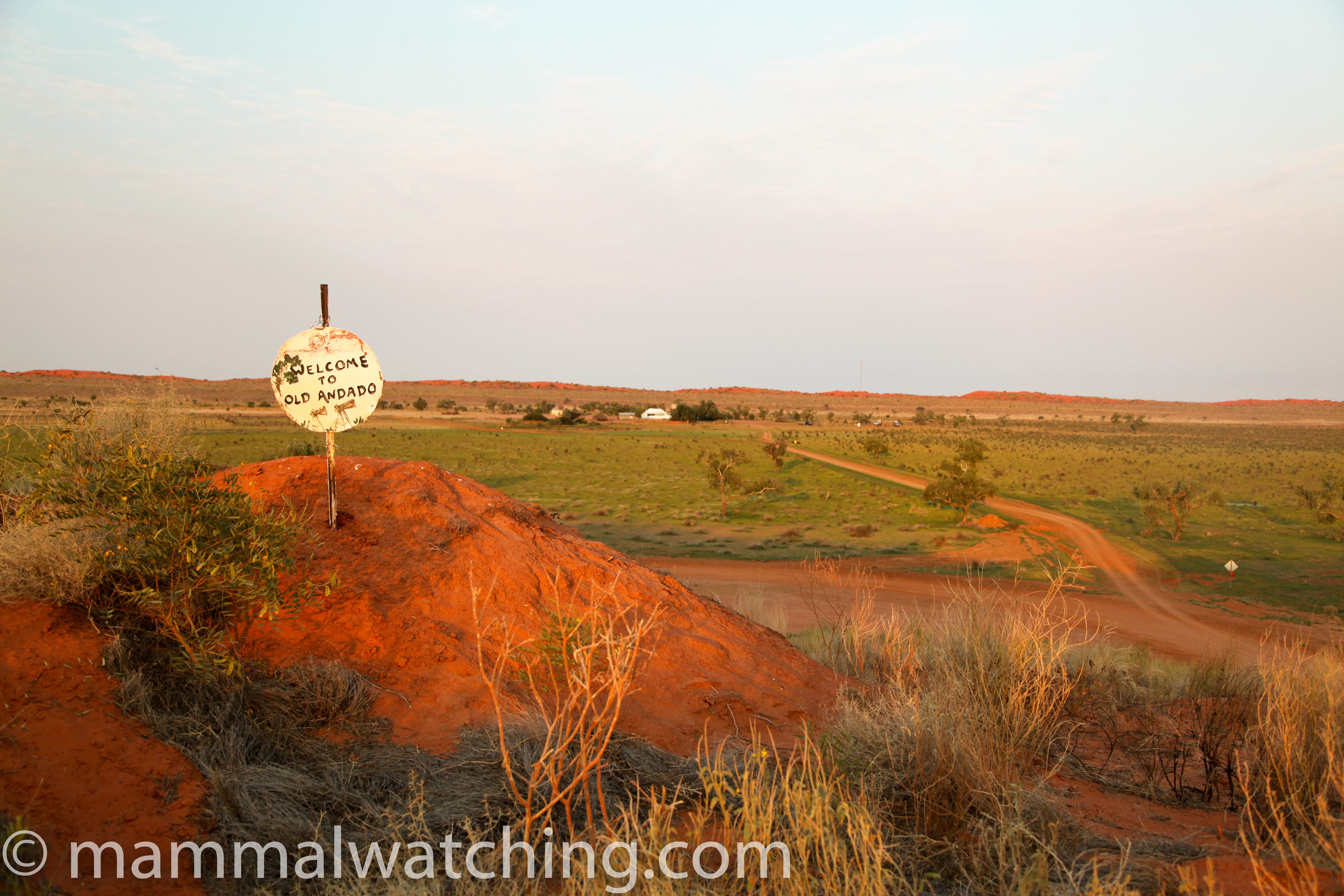 Plague (Long-haired) Rats were scattered all along the track but most common near the homestead it seemed, particularly around the base of the big sand dune immediately to the west of the house. The rats would scamper for a burrow when caught in the spotlight. If the burrow was too small then just so long as the head went down …. 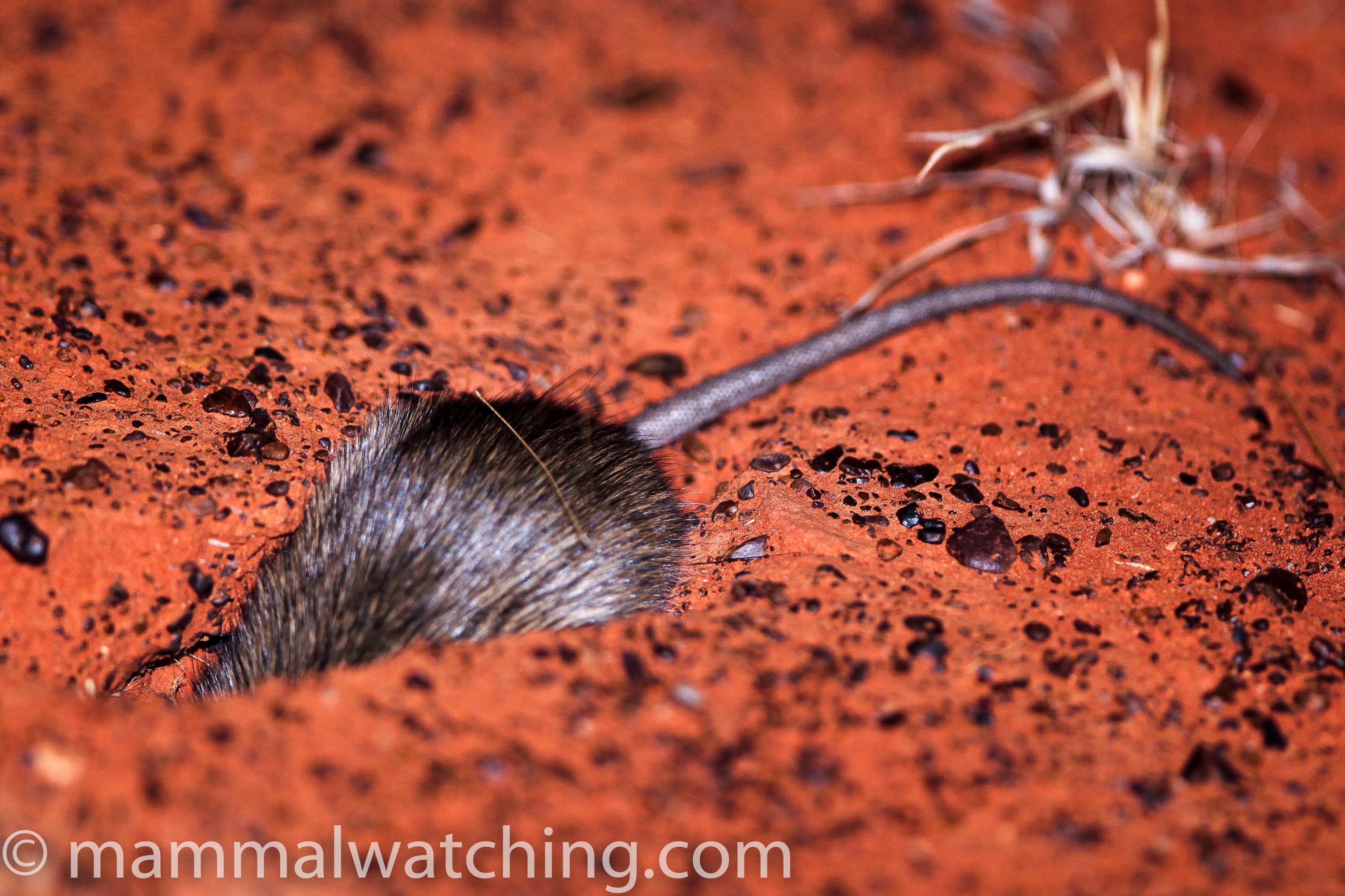 There were several colonies of Plains Mice along the road and they seemed to increase in density as I got closer to the Mac Clark reserve (I saw my first confirmed sighting about 20km from Old Andado) but many many more after that including this animal which obligingly froze in the light. A beautiful animal and one of the nicest looking rodents I’ve seen. 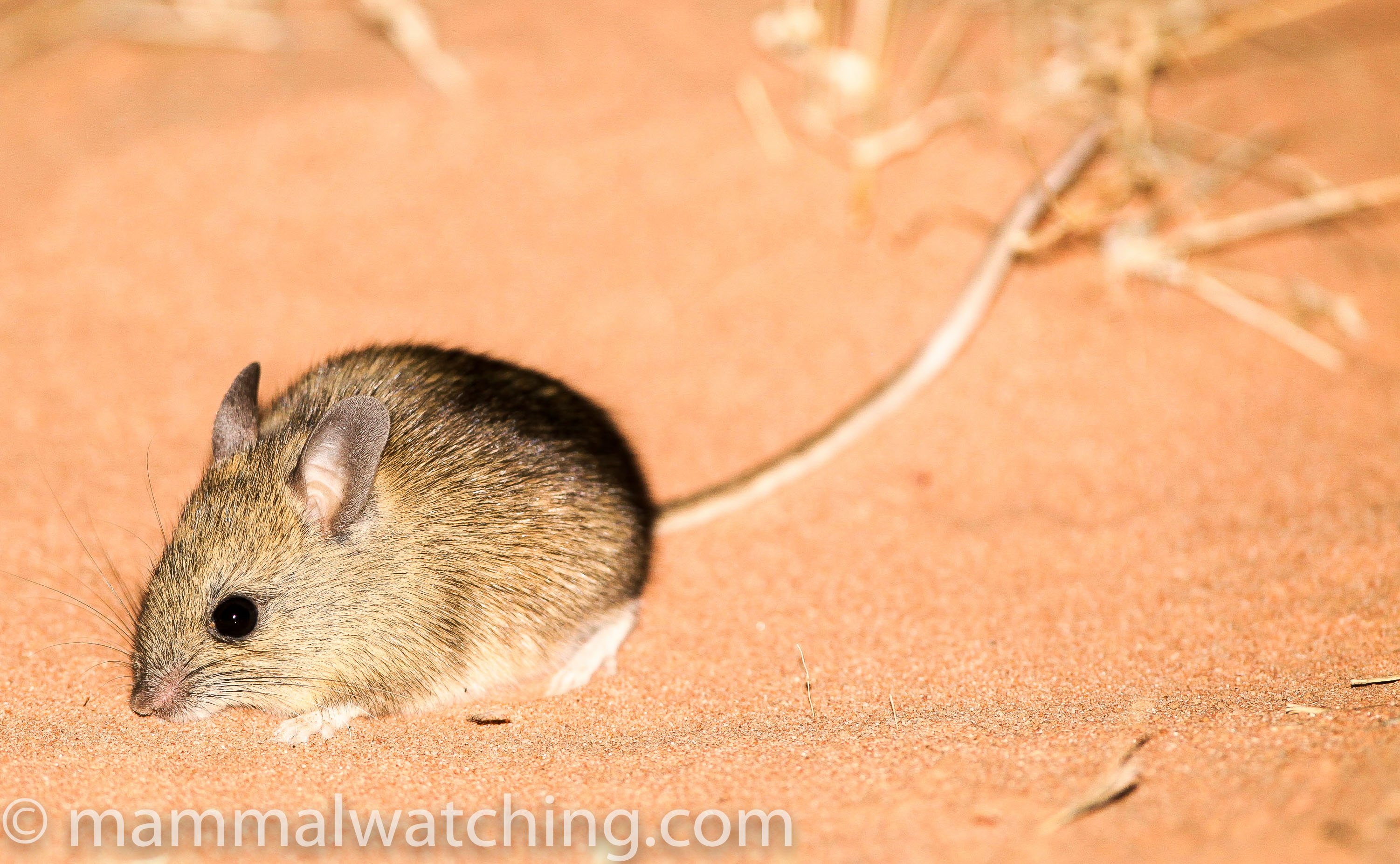 There are Kultarrs on the gibber plains all through the region and I imagine they too increase in numbers after good rains. I saw several animals briefly that might have been this species, finally seeing one well as it bounded across the road, its very long tail with black tuft clearly visible. The second lifer of the evening. They are unusual little things and I wish I had had a longer look.

Back at Old Andado there were a few Sandy Inland Mice in among the Plague Rats as well as some Spinifex Hopping Mice in the dunes behind the homestead. Several Dingos, some Rabbits and the odour of a decomposing Camel rounded off a great night.

The next morning I headed the 100km south to Mt Dare, just 10kms south of the NT/SA border. There were several flooded lakes en route with plenty of bird life.

I headed out back up the Binns Track (into Witjira National Park) that night for a couple of hours spotlighting. There were more Long-haired Rats and Plains Mice, more Spinifex Hopping Mice and some House Mice. 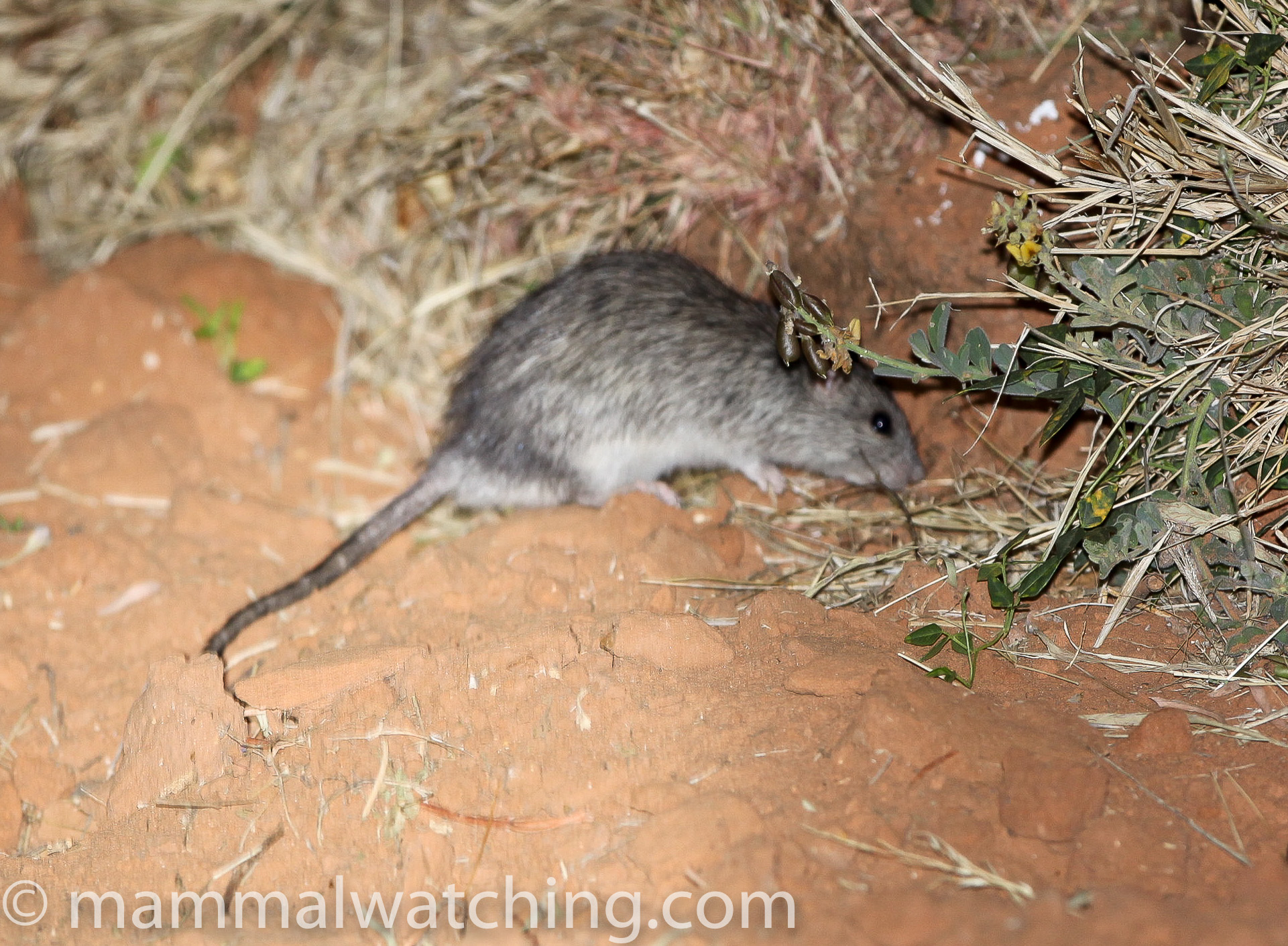 I ran over a small mouse that dashed under the car: it turned out to be my first Desert Short-tailed Mouse (Leggadina forresti). The rodents had attracted many Barn Owls and a feral Cat. 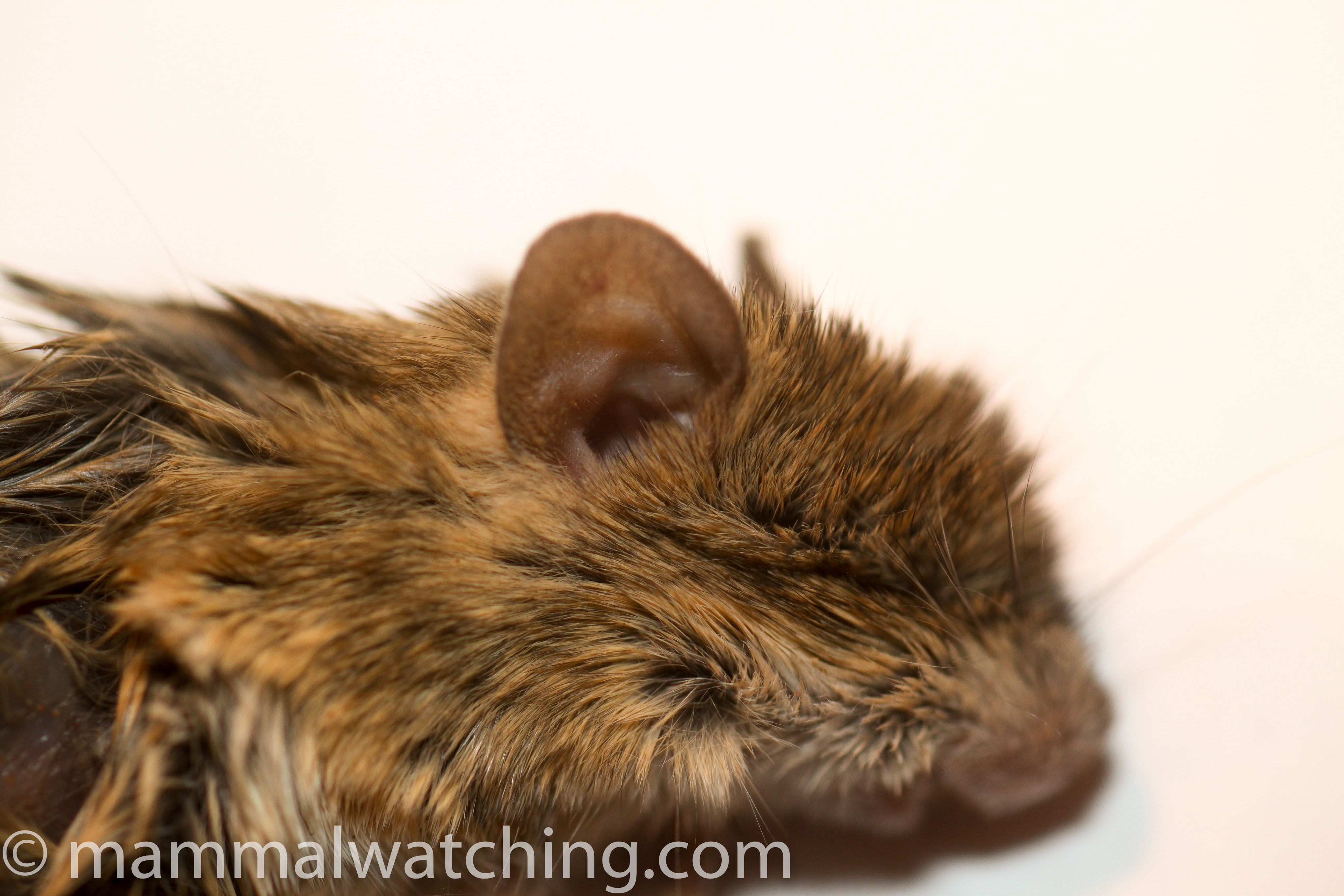 The next morning I drove the long drive to Uluru stopping to look at some Flock Bronzewings at the start of the Binns Track. A great bird…. As far as birds go.

After 250km of muddy dirt I got back on the bitumen at Kulgera and came within a metre of hitting a couple of Red Kangaroos. As I was driving at 140 kmh, and hadn’t reduced the excess on my rental car, I think I was nearly as relieved as the roos.

I went back to Uluru to try again for Mulgara, which are – or at least were – reputed to be relatively common in the dunes. Six years ago I’d been told to try the dunes around the bus (as opposed to car) Sunset Viewing Area. I failed then and I failed again this evening, though as you are meant to leave the park by 8pm I only spent an hour looking. Spinifex Hopping Mice were particularly common there though.

And the sunset over the Rock was more spectacular than I remembered.

On my last day I headed back to Alice and then to Ormiston Gorge in the Western MacDonnell ranges in the vain hope of seeing a Central Rock Rat or Long-tailed Dunnart. 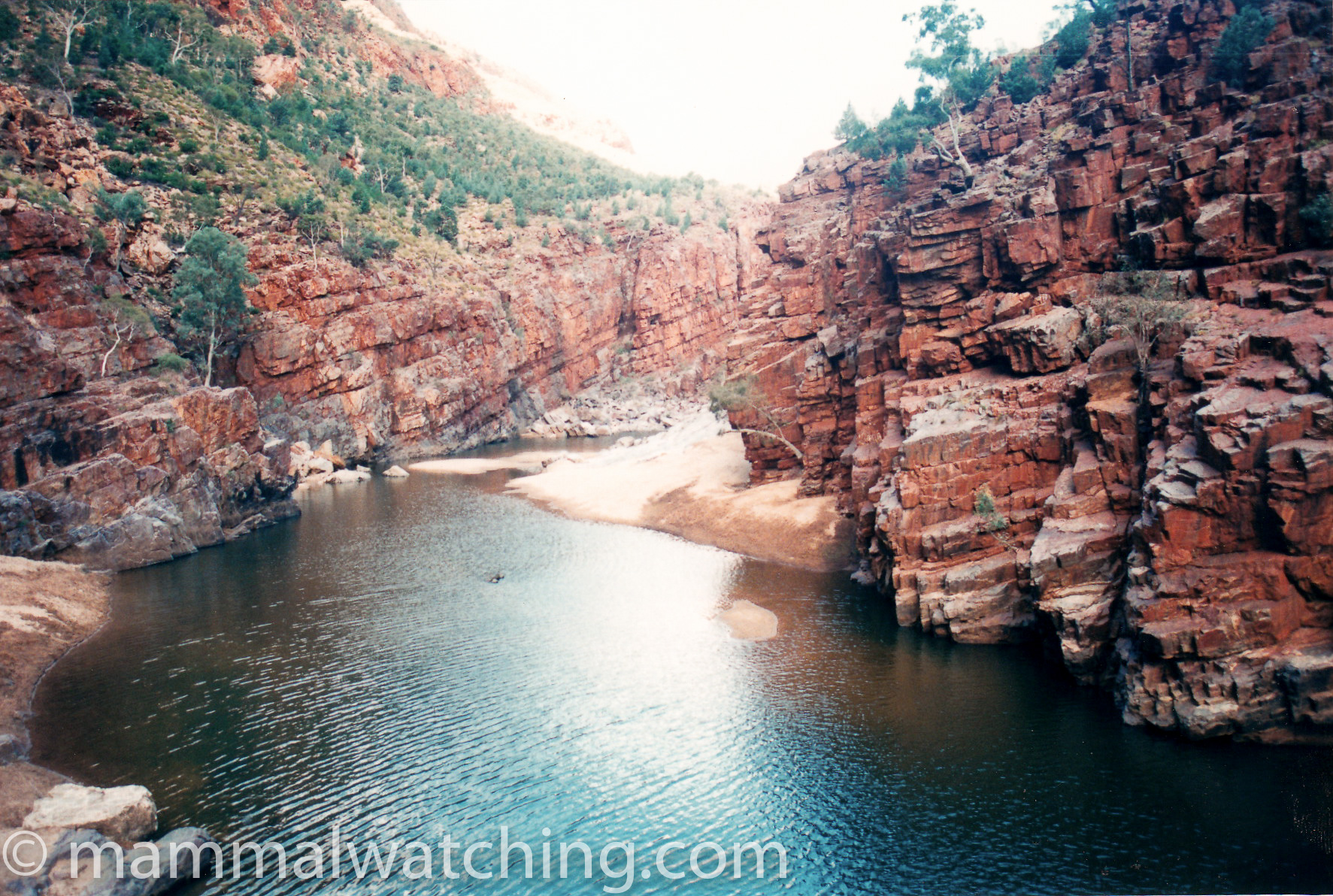 I had camped at Ormiston with the Australian Mammal Society back in 2000 and we had tried to catch some Central Rock Rats (a species lost to science in the 1960s and then rediscovered in 1996). The rats had irrupted in the late 1990s and were being caught inside the tool shed at Ormiston among other places. But they disappeared again in 1999 and we didn’t catch any. In 2010 they were caught again on the top of nearby Mount Sonder. I’m not sure when Rock Rats were last seen in Ormiston but the only mammals I saw during a beautiful 2 hour walk in the moonlight were a few Black-footed Rock Wallabies with a Red Kangaroo on the drive back to Alice.

And now I am flying to India.