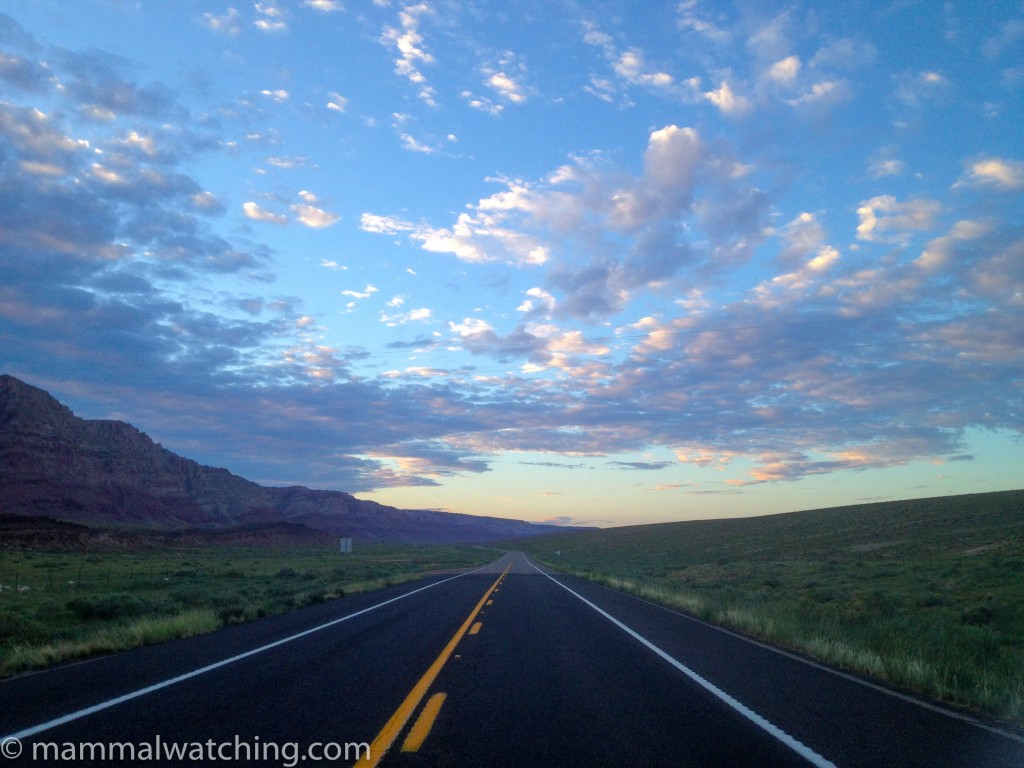 I spent the Labor Day weekend in New Mexico and Arizona mainly looking for chipmunks, ground squirrels and other rodents that I’d yet to see. Once again I was reminded how spectacularly beautiful this area is, and also how rich in wildlife. It is also big: I picked up my hire car late on Friday night and returned it early Tuesday afternoon with an extra 2300 miles on the clock.

My first stop on Saturday morning was the Manzano Mountains, an hour south of New Mexico, which are wonderful in early September.I’d love to camp there. I spent a couple of hours at dawn looking for the little known Manzano Mountains Cottontail. It has hardly been described though the type locality is from 2,900 metres on the north east slope of Bosque Peak. I drove to the 4th of July Campground (from Tajique) along the Tajique Torreon loop road but didn’t see any cottontails. I did see a Rock Squirrel, Mule Deer and Elk.

At the township of Manzano – at about 7,000 feet – I saw three cottontails along the road, on the edge of the forest, early in the morning. If the IUCN range maps are to be believed these were Manzano Mountains Cottontails (no other cottontail is in range). Driving up into the forest from Manzano I saw a beautiful Abert’s Squirrel, White-tailed Deer and several Elk.

Then to Sandia Crest, just to the east of Albuquerque, which has impresive views and impressive numbers of Colorado Chipmunks too more importantly. I saw a couple in the late morning along the trails to the view point from the summit carpark and another under the balcony at the coffee shop there. A cablecar runs up the mountain and I suspect they are even easier to see at the end of the line.

Least Chipmunks were also common and there were Mule Deer on the road. Cottontails here might well be Manzano Cottontails. I didn’t see any but didn’t expect to in the middle of the day. 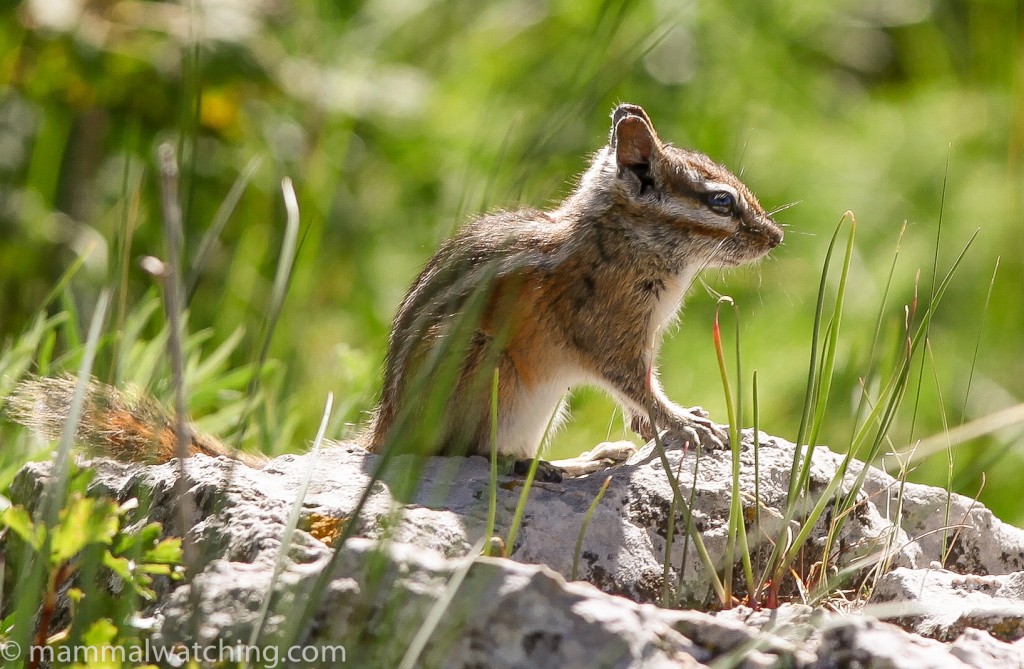 Four hours later I was in Las Cruces, where Coke Smith had found a colony of Mexican Ground Squirrels on the campus of UNM a couple of years ago. I looked around the area he recommended in the mid-afternoon (the desert scrub around the junction of Arrowsheads Drive and Wells Street) and found several ground squirrelish burrows but no animals. At about 5 p.m. I spotted my first ground squirrel which I eventually realised was a Spotted Ground Squirrel (a lifer for me).

I couldn’t find any Mexican Ground Squirrels but the early morning might be a better time to look for them. The Spotted Ground Squirrel was denning in an old concrete storm drain cover (or something like that) along the dirt track that runs through the patch of scrub bordered by Wells Street to the north, and Arrowshead Drive to the east. There were Black-tailed Jackrabbits here too. 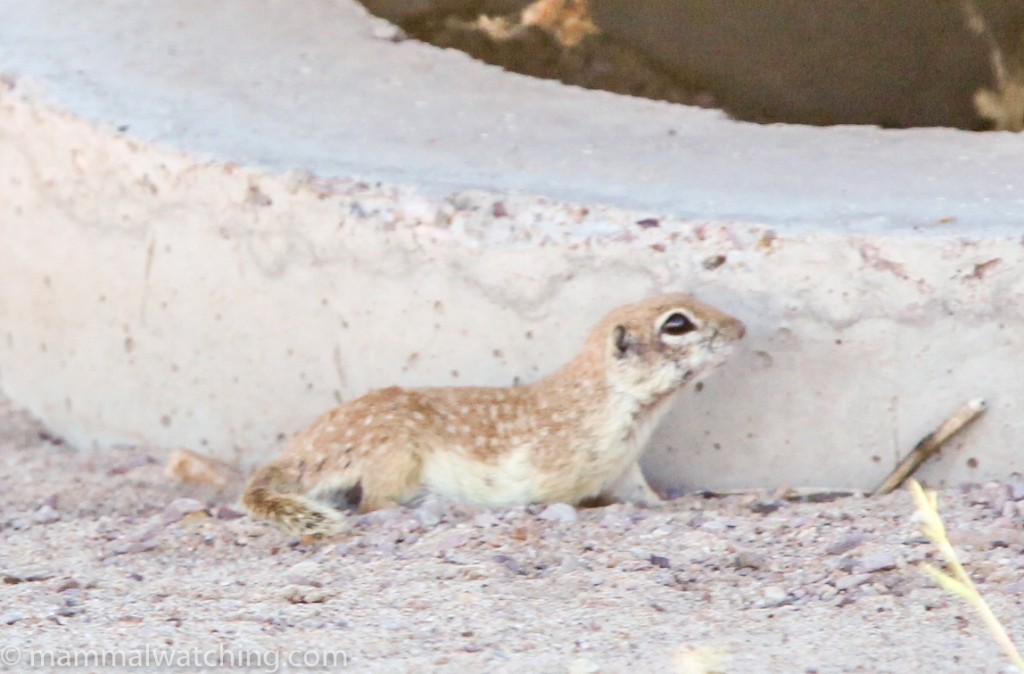 And then it was another 3.5 hours to Carlsbad Caverns. I slowly spotlit up and down the park entrance road from 22.00 to 00.30 and saw five(!) separate Ringtails, a few kangaroo rats (at least one of which was Banner-tailed I think), several tiny Silky Pocket Mice on the road, at least one Hispid Pocket Mouse, Mule Deer and a Striped Skunk. I think the road is likely a good spot for Hog-nosed Skunks, my main goal, though I didn’t see any. 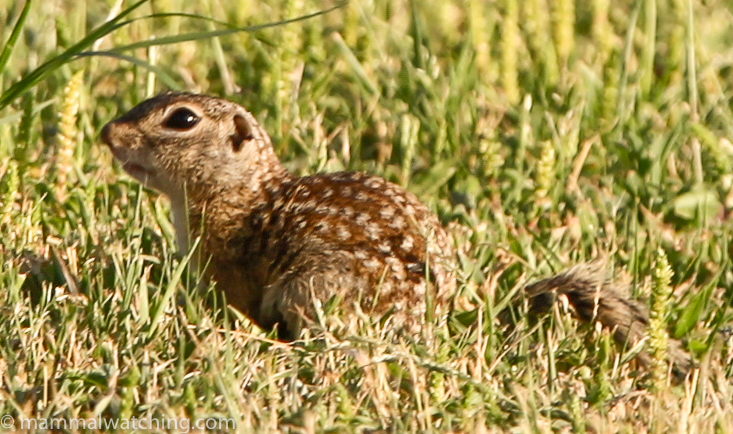 Rio Grande Ground Squirrels (split from Mexican Ground Squirrel) are easy to see in Carslbad City from May to mid September before they hibernate. There is supposed to be a colony in the city park that flanks the river in the centre of town, though I saw several easily on the grass of the Martin Luther King Jr park, along East Plaza street (east of South Canyon Street) at 7.30 a.m.

Three hours later I was in the settlement of Sunspot, about 15 miles from – and above – Cloudcroft. Coke Smith told me that Grey-footed Chipmunks were everywhere and, sure enough, as soon as I set foot in the forest I saw one: at the start of the very short trail to the Cathey Canyon Vista, about 12 miles up the road from Cloudcroft. It responded well to my squeaking.

I arrived in Portal (Arizona) in the late afternoon, mainly to look again there for small mammals after my successful visit in 2012. They didn’t disappoint and I caught more Desert Pocket Mice, plus my first Bailey’s Pocket Mice out in the desert and a Brush Mouse up at Cave Creek. 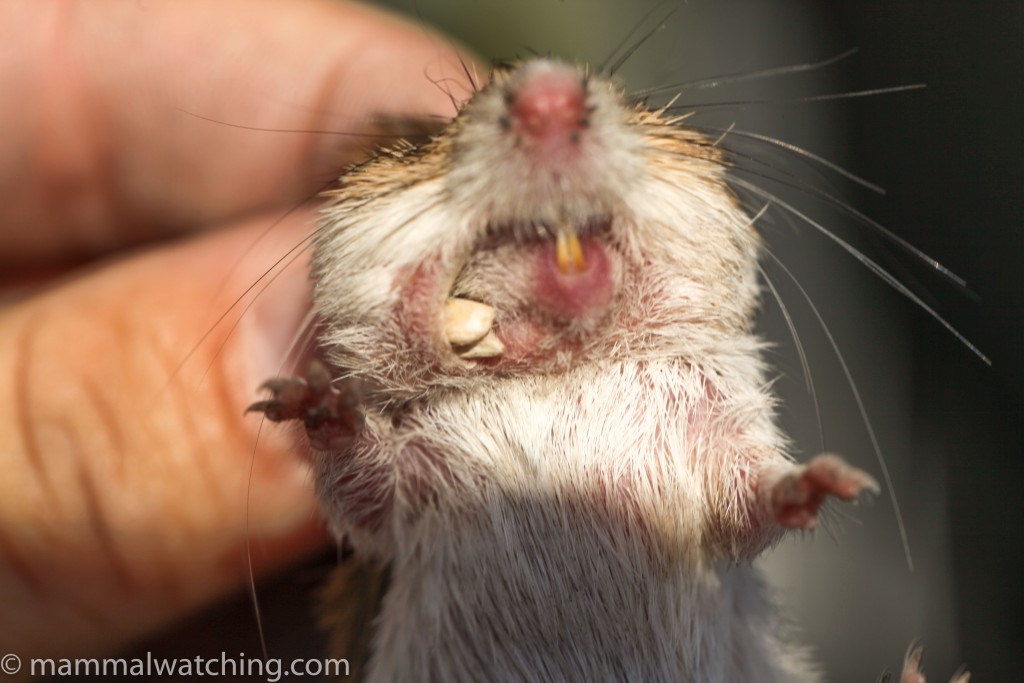 Richard Webb was, coincidentally, staying at Cave Creek too and it was good to finally meet him after corresponding for eight years.

After looking at some Mexican Long-tongued Bats at the hummingbird feeders at Cave Creek, we spent three hours spotlighting. We didn’t see a great deal on the road to Paradise. But down in the desert, along State Line road, there were lots of kangaroo rats (I guess a mixture of Merriam’s and Ord’s). I tried to get a better look at a Banner-tailed Kangaroo Rat than I’d had the year before but we couldn’t find any along Sunrise Road, other than a possible glimpse of an animal among many smaller kangaroo rats. It disappeared before we could get a good look.

The highlight of the night were a couple of rattlesnakes on the road, and a Bobcat running across the road near the Portal store. I saw both a Javelina and a Striped Skunk crossing the same stretch of road during the day too. There were Black-tailed Jackrabbits along route 80. 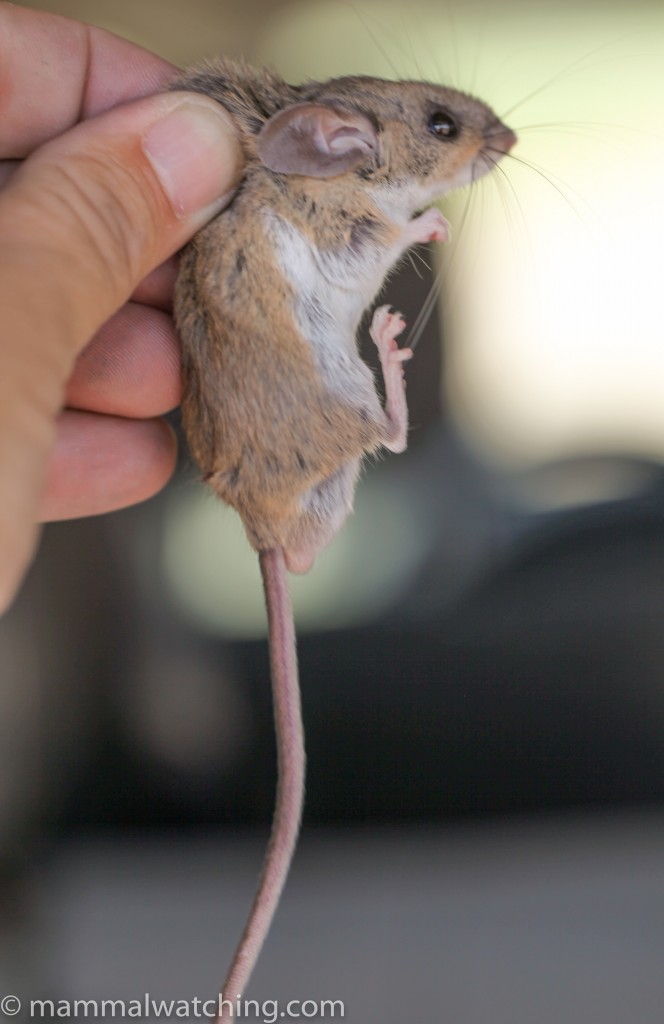 The long long drive from Portal to Vermillion Cliffs goes through Tucson so I stopped in at the Sweetwater Wetlands, a sewage treatment works, just off Interstate 10, north of the city centre, to look for Arizona Cotton Rats, allegedly common and often diurnal.

I didn’t arrive until 11 a.m. so it was perhaps not surprising I didn’t see any during my hour there (there are plagues of lizards here too so its not possible to check out every rusting you hear either). Apart from Desert Cottontails and a Rock Squirrel I also got a great look at a Bobcat (the second in about 12 hours after seeing one at Portal the night before). 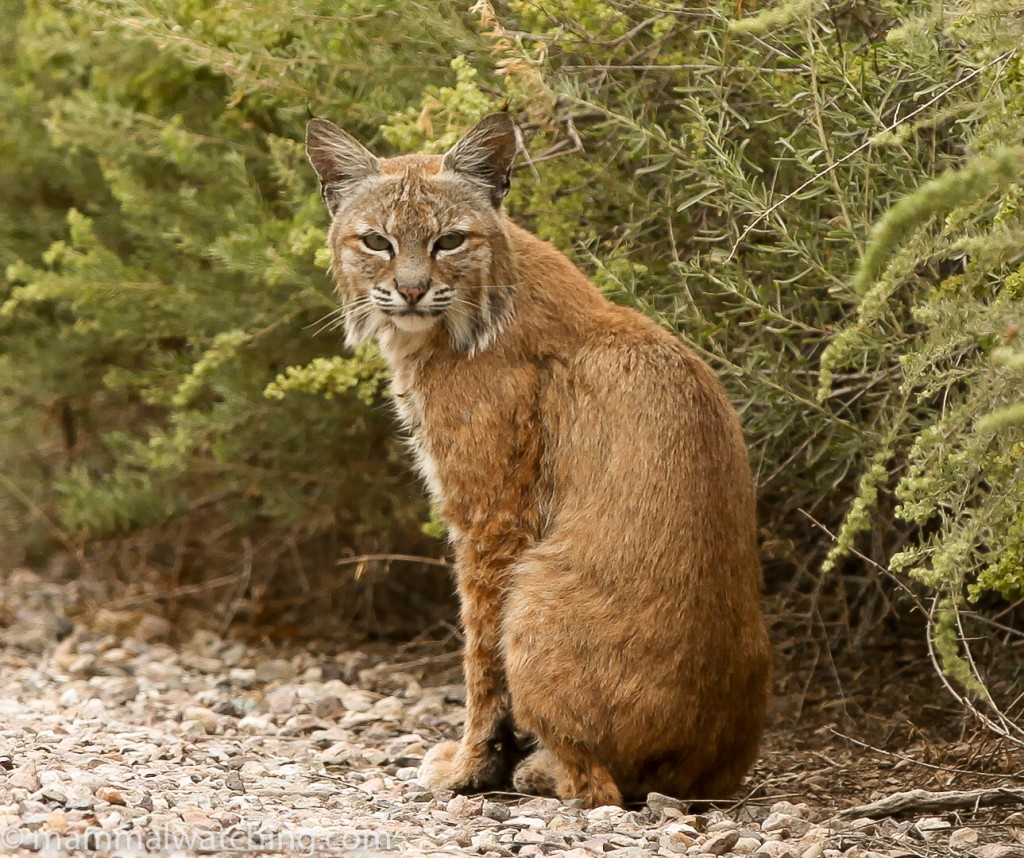 It was another seven hours to Vermillion Cliffs, and the scenery was stunning especially after Flagstaff. There were lots of kangaroo rats along BLM road 1065. I suspect most were Chisel-toothed Kangaroo Rats given the habitat they were burrowing in was lots of pebbles and heavy soil (Ord’s are the only other possibility there). As usual it was hard to get them to stay still long enough for a good look, but I did see one well enough to be sure it was a Chisel-toothed. There was a Coyote out there too, and Elk in the forest just a bit further north along Hwy 89a.

It took six hours to drive back to Albuquerque airport on Tuesday, through more spectacular scenery. There was a Gunnison’s Prarie Dog by the side of the road coming into Window Rock.

An intense trip, with a heavy carbon footprint, but I saw ten lifers (marked F below) among 29 species over the long weekend.