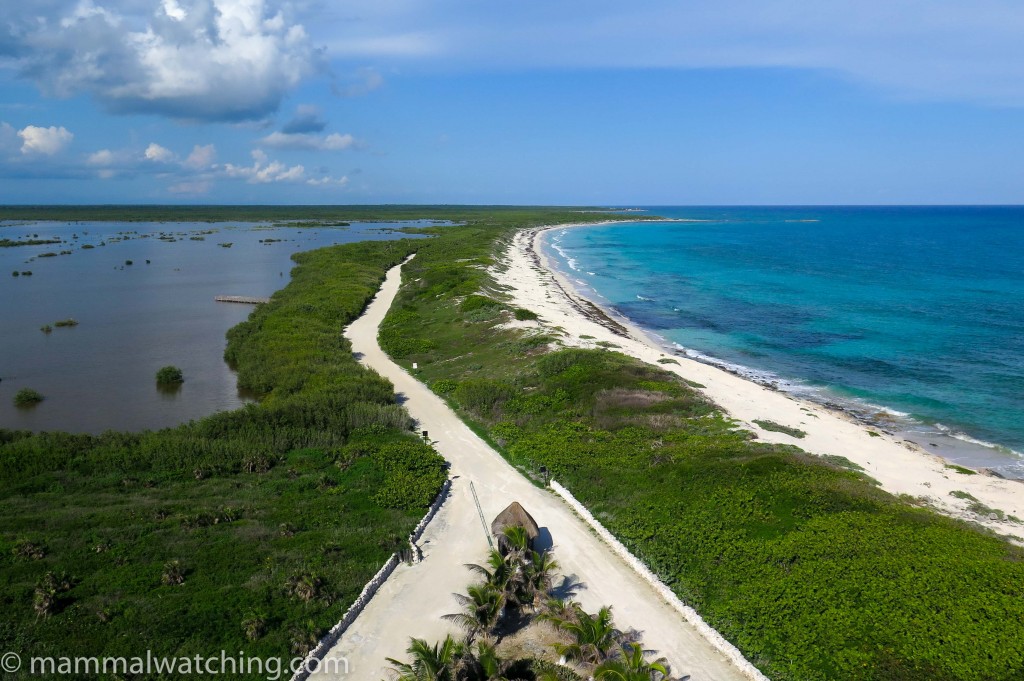 A work trip to Mexico in October 2015 provided the perfect opportunity for a weekend stopover on Cozumel Island to look for the endemic Dwarf Raccoons and whatever else I could find.

I checked in with the very awesome Fiona Reid about mammal watching on the island. She put me in touch with Kevin Schafer, a photographer who’d recently visited Cozumel. He gave me some great advice on seeing both the Raccoons and the Dwarf Coatis, and seconded Fiona’s advice to get in touch with Cozumel mammal expert Alfredo Cuaron, head of the Conservation NGO SACBÉ (Servicios Ambientales, Conservación Biológica y Educación A.C). Alfredo, in turn, was good enough to connect me to David Valenzuela and his colleagues who were working on the island. They very kindly agreed to show me around for an afternoon.

Cozumel’s mammals are both endemic and threatened. General pressure of human development coupled with invasive species (boas introduced by a film maker, feral dogs and more) are key threats. And from what I could tell just about every species was critically endangered. That said, some species show signs of recent recovery (perhaps because the boas are declining). The mammals also show a large degree of endemism.

My targets were the endemic Cozumel (Pygmy) Raccoon (I think universally accepted as a distinct species) and the Dwarf Coati, first described as a full species but then demoted to a sub-species on the basis of a study involving a sample of just three animals. I was told that recent work on the DNA is inconclusive as to whether the Coati should, or should not be, given full species status. There’s also an endemic Harvest Mouse (now extremely hard to find), a Grey Fox (that hasn’t been seen for 10 years) and subspecies of Peccary and Coues’ Rice Rat.

David guaranteed I would see Raccoons and Coatis at spots where they had learned to beg for food (details below). So we decided instead to start by visiting the Punta Sur Park, on the southern tip of the island, to try to see some wilder animals. 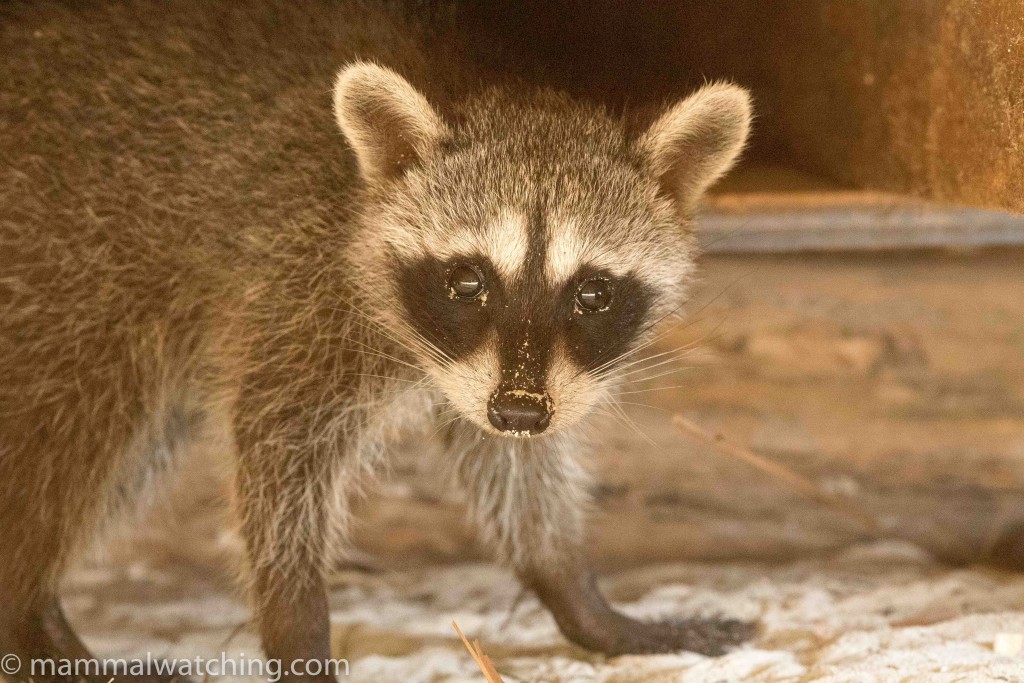 We arrived at the park at about 4 p.m. and visited the restaurants (already closed for the day) on the beach at the end of the road a couple of kms past the Celerain Lighthouse. We found a Pygmy Racoon within 10 minutes and a Coati shortly after. 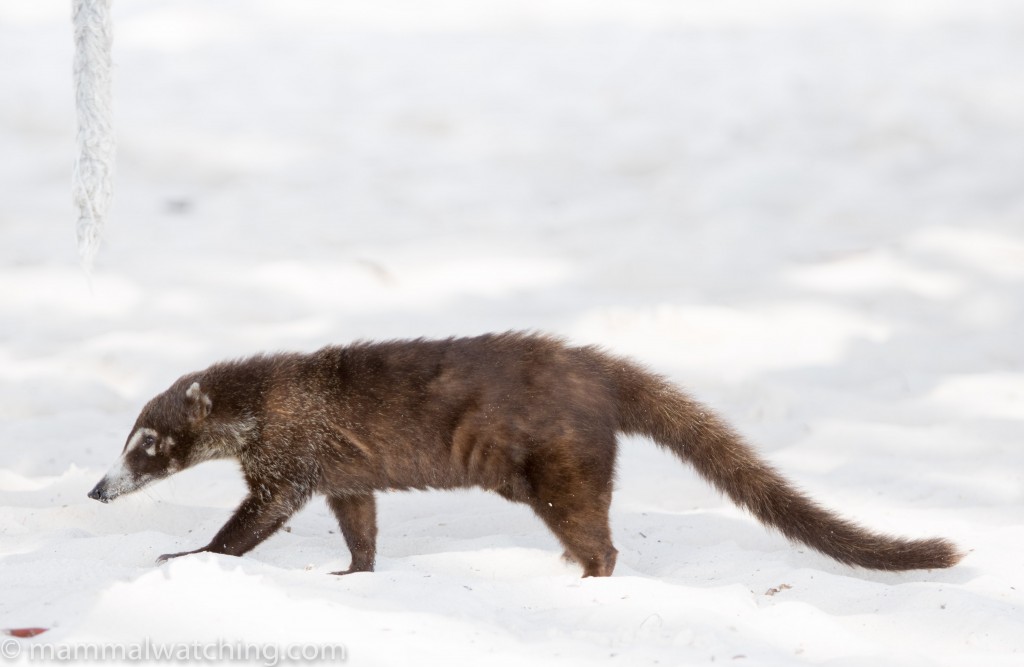 We drove up the east coast a couple more miles and visited a disused quarry where David had recently seen White-tailed Deer and a Peccary. We weren’t lucky. Driving back north towards the town another Coati crossed the freeway. 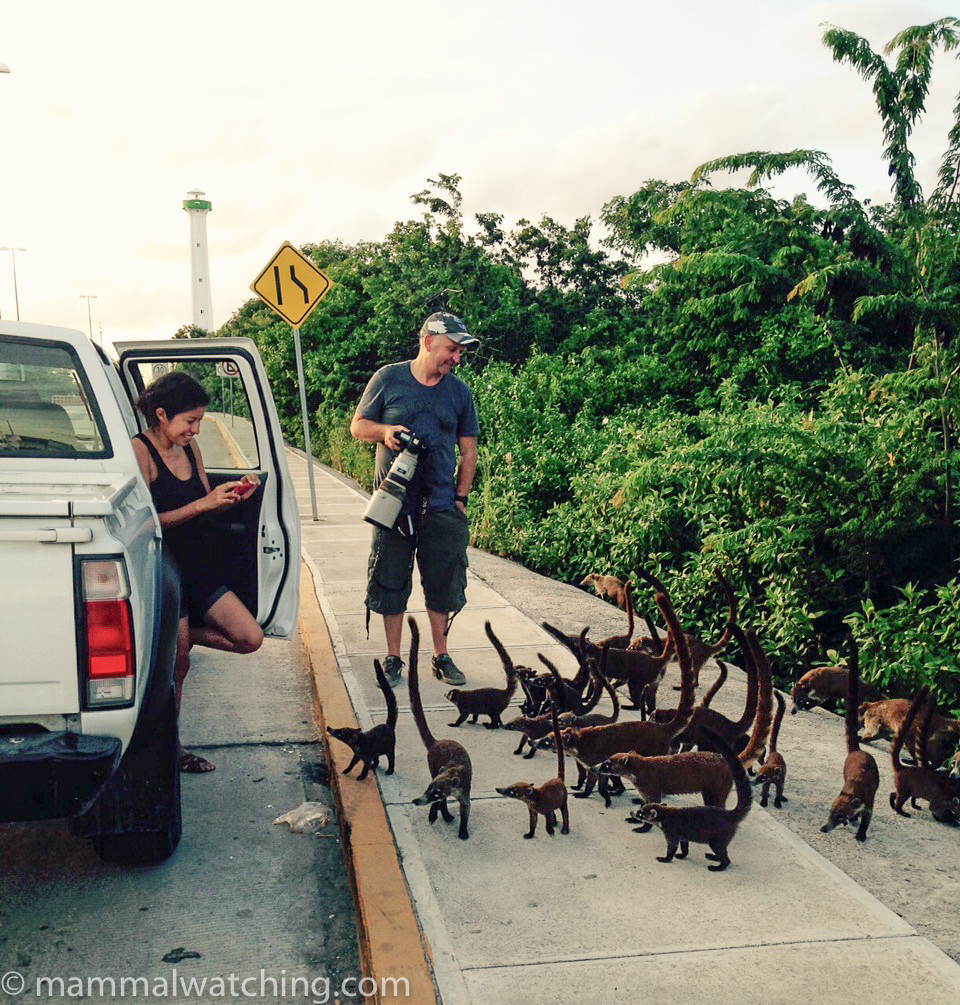 Our last stop for the day was an area, just south of the city, where the locals feed the “Pizotes” (Coatis) late every afternoon. Sure enough there were 30 or so animals swarming the sidewalk and then  swarming me when I got out of the car. 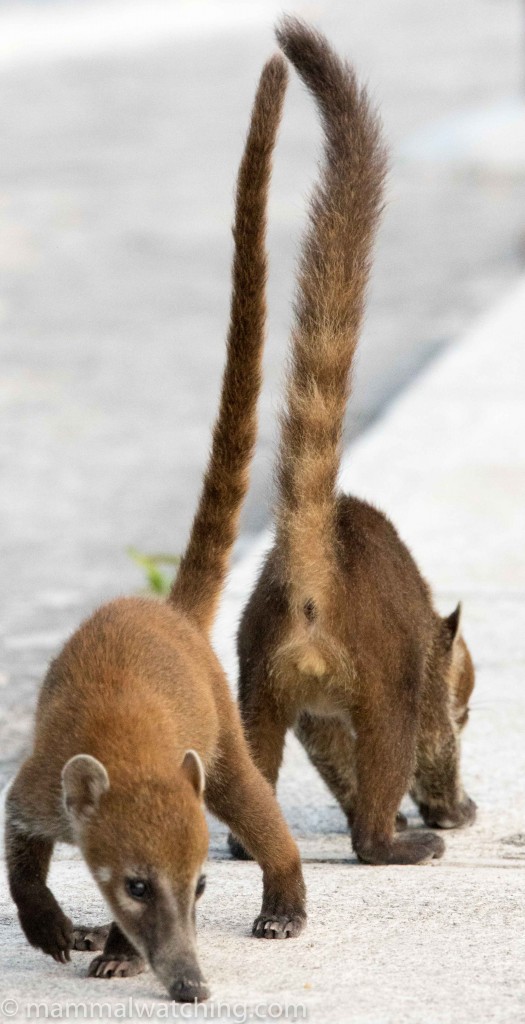 To reach this spot you should drive south from the main town. As you are leaving town you will see a lighthouse on your right (obviously … because that is where the sea is!) at Caletita Beach. On your left is a road is a road signposted “Caletita”. The Coatis are along here just before the guard post and car park for a ferry dock.They seem to live in some scrub on the northern side of the road but emerge in the late afternoon for handouts. 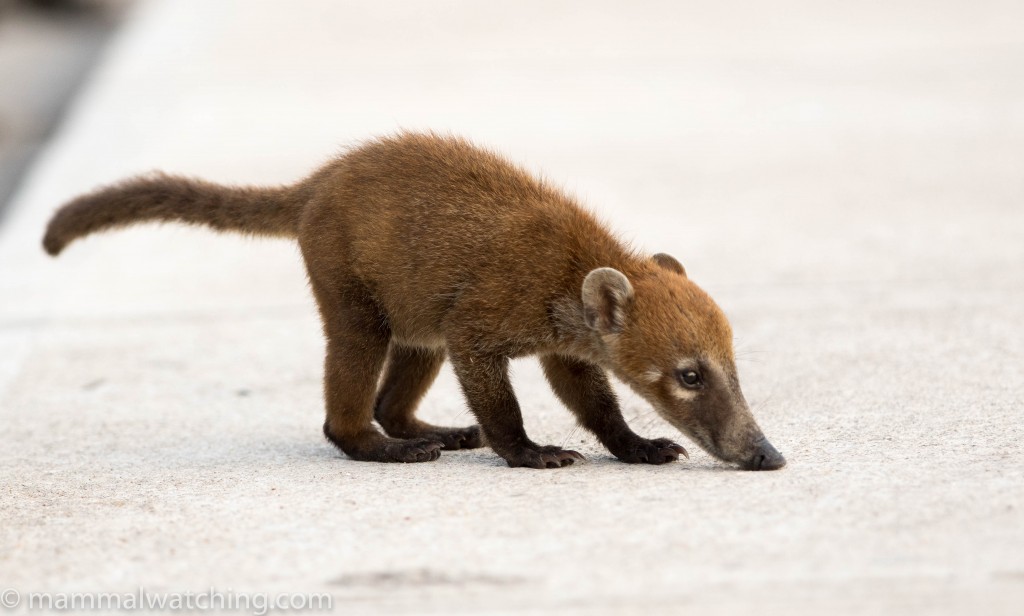 The next morning I drove a few kilometres north on a dirt road that leads to a beach and jetty where boats depart for Isla Pasion (marked on every tourist map). The Racoons would be everywhere, I was told, begging for – or stealing – food. Not this morning. I presume I was in the right place (judging by many raccoon tracks in the mud) but that dawn was too early for the animals as the tourists had not arrived. 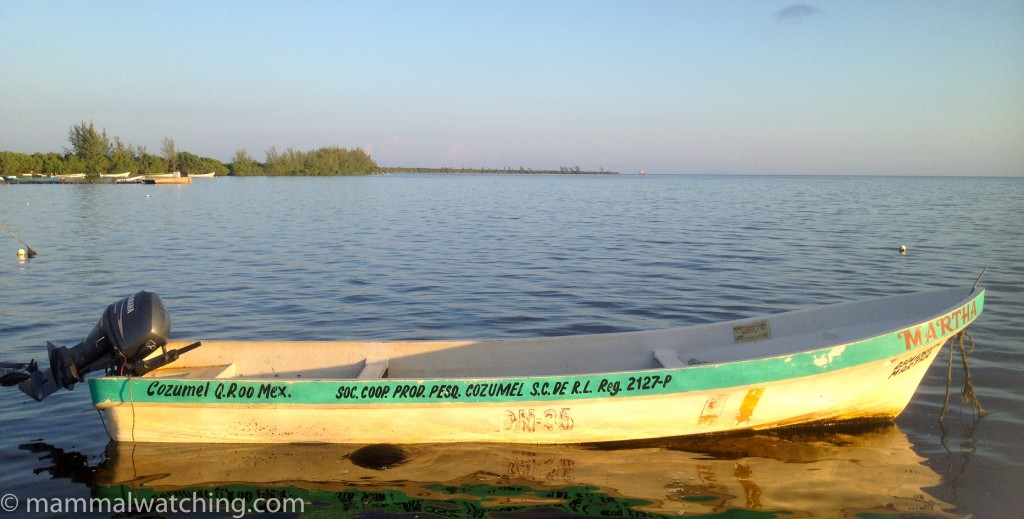 The mosquitos were so bad I gave up after 30 minutes. I wish I had noticed the warning in Vladimir Dinets’s report to pack a lot of insect repellent.

A big thanks to all who helped. Particular David Valenzuela and his colleagues Luis Bernardo and Ariadna for showing me around.

I left Cozumel on the 40 minute passenger ferry to Playa Del Carmen on the mainland, picked up a car and headed south for my second night. The only mammal left on my lazy agenda was a Yucatan Squirrel. A species not present on Cozumel but apparently easy to see on the mainland. 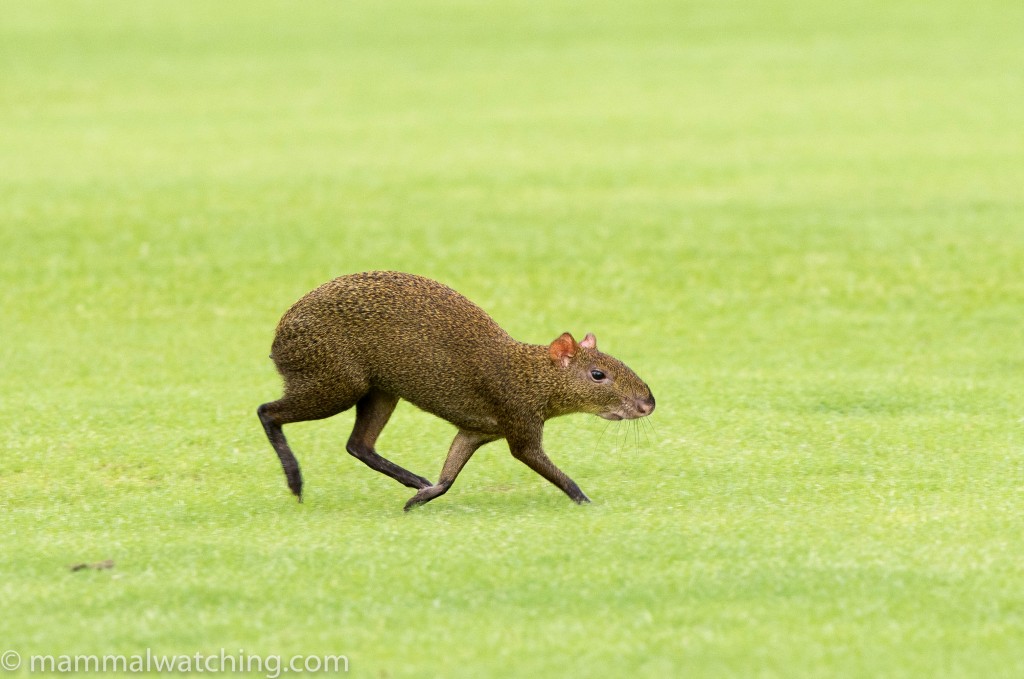 I was told of a small park in Playa del Carmen near to the ferry where I ought to be able to see the squirrels. The only park matching the description was Parque La Ceiba (on the corner of Calle 1 Sur and 60 Agenda Sur): it was raining heavily when I got there and I didn’t see any mammals.

I drove south to Puerta Aventuras: part small town, part gated resort community. I was staying in the latter section at the very pleasant LM Boutique Hotel. The quiet streets were home to Central American Agoutis and in the evening I saw a Coati on the golf course. 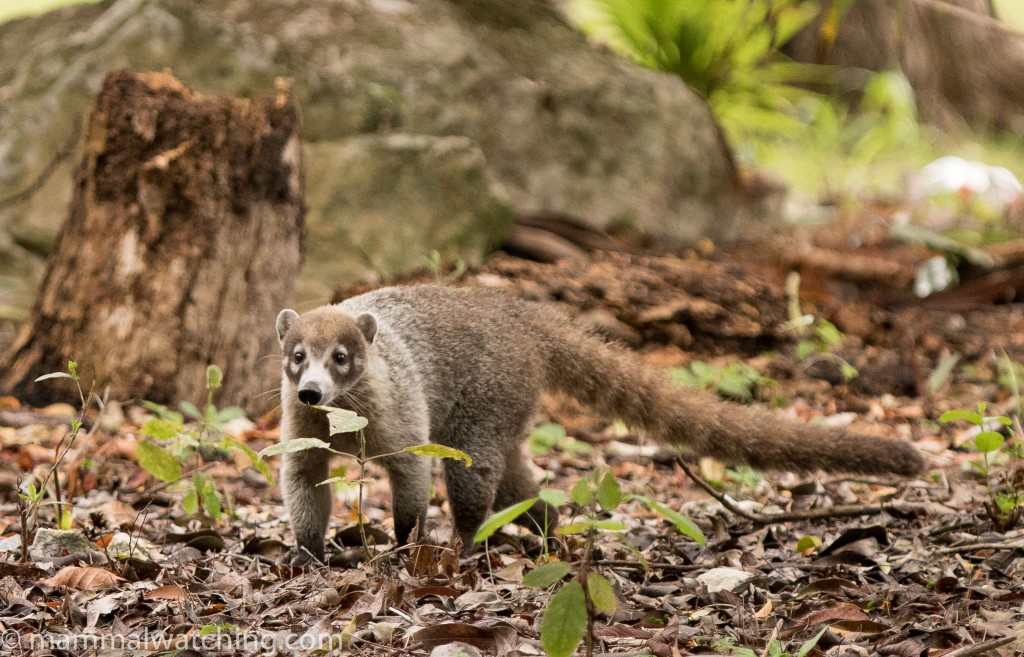 Heavy rain that night put paid to spotlighting. The hotel staff told me the squirrels should be easy to see at the edge of the golf course the next morning but I saw one at dawn in a coconut palm right outside the hotel. There was another in nearby trees at 9 a.m. 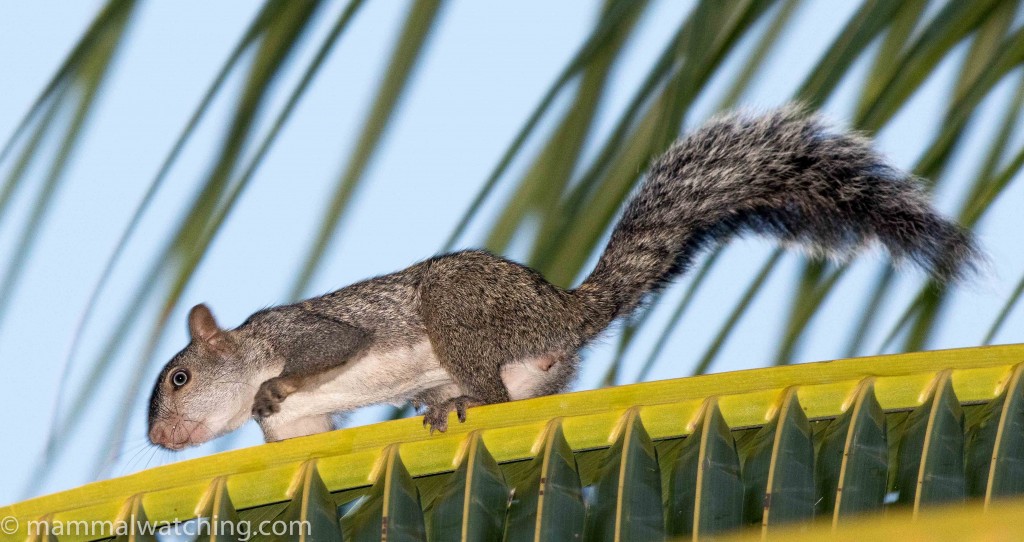 It started to rain shortly after sunrise which, coupled with a flat tire, put paid to more squirrel searching. And a brief wet walk along the golf course didn’t produce any mammals at 8 a.m. So I left for a flight to Guadalajara.