I went on a week-long trip to the Peruvian Amazon near Iquitos in August. I spent five nights at the wonderful Tapiche O’Hara Reserve (which is described thoroughly in Jon’s trip report), where the highlight was Bald Uakari. It’s a mammal I’ve wanted to see since I watched National Geographic’s flooded forest documentary as a kid. We had to spend long hours hiking through the palm swamp to find them, though the search probably would have seemed easier if I hadn’t been sick (something which happens very rarely on my trips). It seems that the Uakaris are easier to see in the wet season, when they range more widely through the forest. However, unless one is very unlucky, three full days should be more than sufficient to locate them at any time of year. Other highlights included both river dolphins, Tamandua, and Yellow-crowned Tree-Rat. I also photographed this rodent at the boundary of an oxbow lake, which I have been unable to identify: 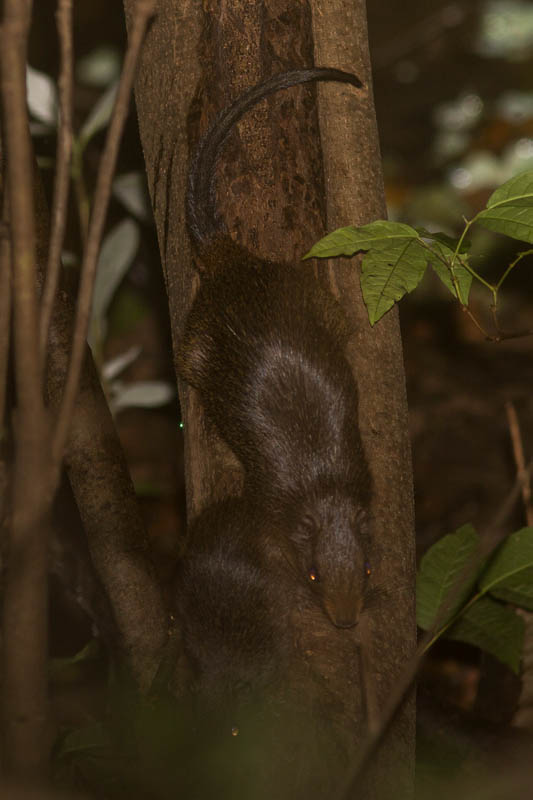 Does anyone have thoughts on the identification?
After Tapiche, I spent a day birding the white sands forest in Allpahuayo-Mishana with Jacob Socolar (who, on my suggestion, originally posted here about Tapiche in 2013). While birding, we saw Kinkajou and Spix’s Night Monkey, and heard Olingo and Yellow-handed Titi-Monkey. Equatorial Saki is also possible. I was planning to spend most of another day at Allpahuayo-Mishana searching for the Saki and more white sands birds, but there was a strike in Iquitos and I couldn’t leave for the forest.
Jacob also told me about his sighting of a Water Opossum at ACTS near Iquitos:
“In brief, it was in the evening, maybe sometime around 20:00, from a boat heading along the tributary of the Sucusari river that flows past the ACTS buildings, but downstream from the ACTS buildings. I could look up a date, but it was definitely mid-August.  Saw it swimming across the stream.”
Ben
P.S. Katoo (who is originally from Brazil) suggested this site in the Pantanal for Bush Dog: “Fazenda Boas Sorte. Km 28 estrada parque from Buraco das Piranhas.”
Share this
0 likes
Related Articles
5 Comments