Anyone any good on Indian bats? There seems to be a paucity of literature on the subject, but I was hoping for some input on the below two species photographed by Will Soar on our recent trip. 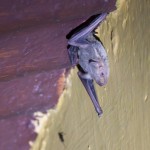 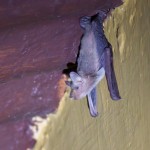 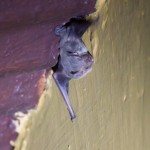 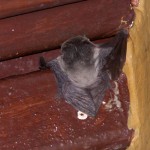 Body length estimated to be 8-9cm; these were photgraphed emerging from a roost in one of the bungalows in Blackbuck Lodge, Velavadar, but we also had good binocular views of what I’m sure is the same species at Sasan Gir, where they were alighting briefly on a tree trunk to glean ants. At both sites they were out relatively early in the evening, flying circuits with fast wingbeats but slow progress and occasional glides. This matches the flight action described for Dormer’s Bat (aka Dormer’s Pipistrelle) Scotozous dormeri in Menon’s mammals field guide; I also believe the size and coloration are good for that species. However, I can’t find any images to back up my identification, any ideas on how to be sure? 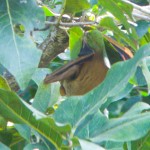 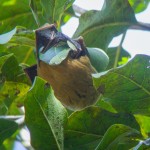 I have even less of a a clue about this handsome individual from Gir NP. I put the bosy length at ~10cm, maybe a little more; some of the other saw it fly into the tree and thought it looked quite substantial and long-winged.  A house bat sp. has been suggested, but I’m not sure (quite happy to be wrong though!). I think the dorsal fur is too long and orangey; I got a brief look at it’s face before it hunkered down (no pics sadly) and the muzzle was narrower than I’d expect for a Scotophilus. The contrast between the fingers and the membranes seems interesting, but it may not be possible to put a name to it.