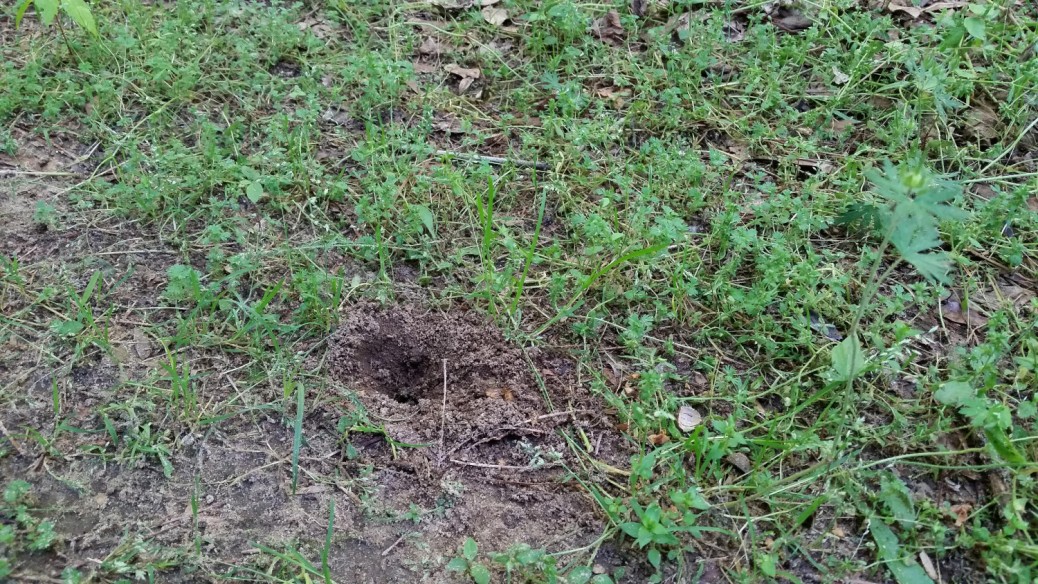 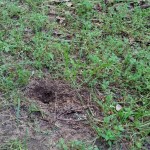 Recently I explored a riparian tract along the Chattahoochee River just north of Atlanta, Georgia (USA). In open, wooded thickets, some distance from the water and rather steep river bank, I found a number of small, shallow mammalian digs – photo of one attached herein. These were situated in several locations, some distance apart. The soil was moist and soft. The digs were rather neat and showed no claw marks, unlike canine digs (for which these were also too small). No tracks were evident.

As far as I know, such digs are a classic sign of Striped Skunk, which would constitute a very good find for this area. Skunks do occur here but they are scarce and seldom observed.

However, Virginia Opossum is also a possibility and it is common locally. Further, someone raised the possibility of a Nine-banded Armadillo which makes similar digs. This animal does not inhabit the immediate vicinity but does occur in adjacent areas of the state, not terribly far away, so its local presence cannot be ruled out entirely. It has been expanding its range. Nevertheless, it is unexpected here and much less likely than a skunk.

Less likely, it was a Raccoon, which is a regular resident. I believe that the other possible candidates – Shrews, River Otter, Mink, Bobcat, Red or Gray Fox, Muskrat and other rodents – wouldn’t dig repeatedly like this.

Would anyone be able to advise on the digger’s ID ?

Thanks in advance and best regards,