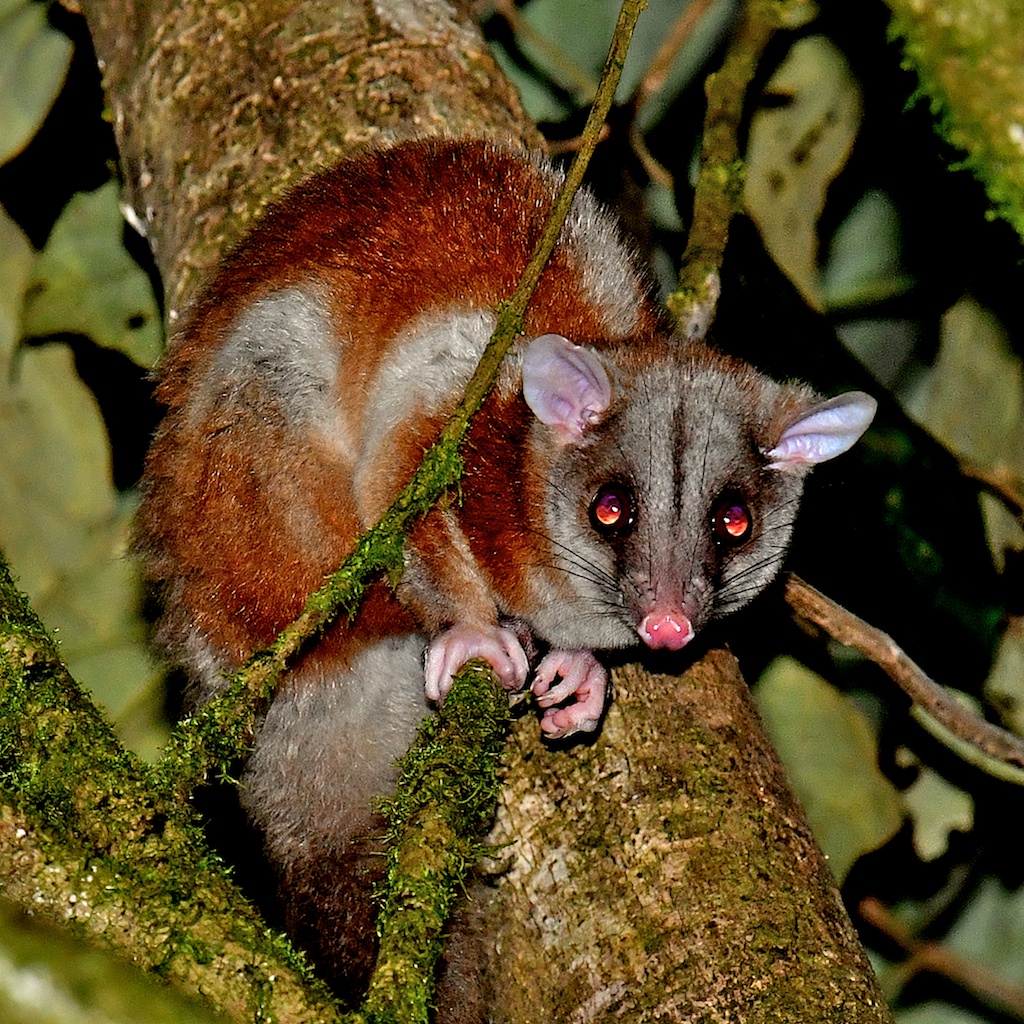 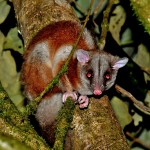 In December 2017 I did a six-day trip to Nicaragua, the trip’s brevity being due to work obligations on each end. I also was rushing a bit given that Jose Gabriel, the famous Yapok-catcher and King of Brazilian Bat Netting, starts graduate school in Arizona in Jan 2018. Arizona’s gain is Nicaragua’s loss; after he starts school and related field work, he won’t be home very often to guide.

This was my first visit to Nicaragua but I hope not the last; if you have been to Panama or Costa Rica, the terrain and general species will be familiar. Nicaragua is better known to surfers than to birders or eco-tourists but has strong potential to be a great neotropical destination.

We did not try for yapok this time. Because I had less than a week, we had to narrow our radius. (Besides, I promised to save that one for Phil Telfer and Venkat Sankar.)

While we had a fun time each day, the trip list is 20% smaller than it might have been due to a string of bad luck. In the lowlands, high winds limited bat net success. In the mountains it was rain plus wind that did us in. At Masaya Volcano, our after-hours access was rescinded by the bureaucracy, so I didn’t get to go up and see the red glow, though I had a chance quickly to tick two bats netted by others during survey work.

Throughout the route, two prior storms—one this fall, one the previous fall—had washed out roads, uprooted roost trees, and in the case of the El Abuelo Caves, made access there utterly impossible. This last was a bit of a shock to Jose Gabriel and his chums Maynor and Luis; even being willing to go into the swamp up to their waists didn’t let them find a route through the fallen trees, thick vines, and flooded landscape. Here the guys are on the shore of the big lake, trying to figure out what to do. (We already had had to leave the car about a kilometer away.) I knew it was going to be serious thrashing when they left their cell phones with me before trying again. 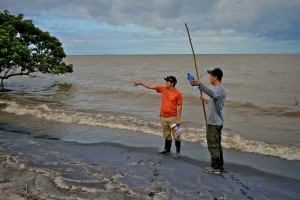 Because of these problems we missed loads of expected stuff: we had no sloths at all and we had only one monkey species (howler), only one skunk (hooded), and many of my targets just could not be located, despite Jose’s best efforts. He really is an amazing field biologist. He did his best. 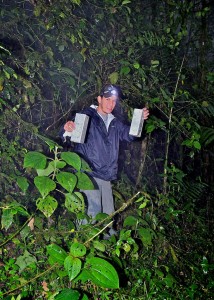 We started at the village of El Ostional (“the oyster beds”), which is on the SW coast near the Costa Rican border. The best place to stay is the basic but charming 4-room hotel, Manta Raya. For nature study, one needs access to a private reserve / cattle ranch, Escamaca Grande, a few miles back north on the road to Managua. 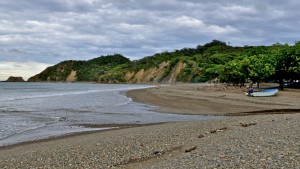 With the Abuelo Cave unreachable and dusk falling rapidly, the guys netted nearby on a random river at something marked Sardina Puente. It was actually productive, but we got rained out early in the evening. 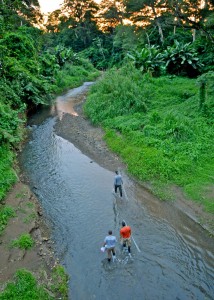 In order to pick up a snake specimen we drove the long way around to El Jaguar, a “Monteverde” kind of place that mixes forest remnants with well-managed coffee plantation. I won’t say the trip was ruined exactly by the arrival there of 45 middle-school students on a sleep-over, but it certainly limited things like bird photography at the feeders around the main reception area. I am personally not fond of gangs of kids, not least of which since the arrival of a similar pack in Brazil wrecked my chances to see the maned wolf at the usual monastery site. With middle schoolers, one is okay, two almost too many, and three or more is a disaster of pushing, shouting, and cell phone waving. 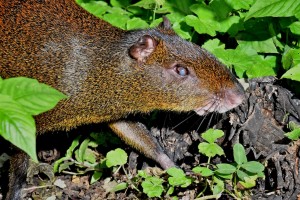 We next went to another well-managed forest / coffee plantation, La Bastilla inside La Reserva Natural Cerro Datanlí El Diablo. This is mid-altitude cloud forest, quite scenic, on a very large and well-run estate. You need a 4wd (or high clearance, low-geared truck) to get to the lodge. 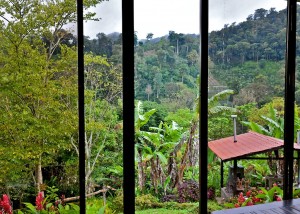 My final in-country day was in and around Masaya Volcano and adjacent lakes. 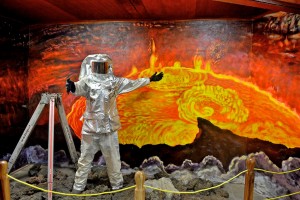 So that others know what to expect, here is a sample night’s results above La Bastilla.

Jose and I shoot Nikon and so could pool lenses and share flashes. Relying on his technical skills and some borrowed tripods, we interconnected two infrared triggers, four flashes, and four cameras to try and get in-flight shots as netted bats were released in a fabric-lined box and then flew out into the night. We also tried using a “portrait” style light box for in-hand work. Three shots by me: 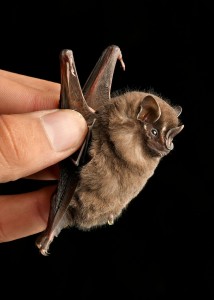 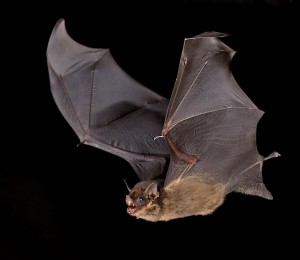 During one of our shots we were photobombed by another bat (not one of “ours”), which can be seen on the bottom left. 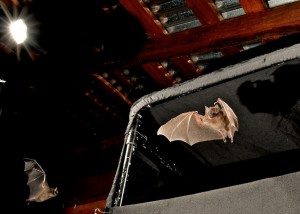 Jose with some of the gear: 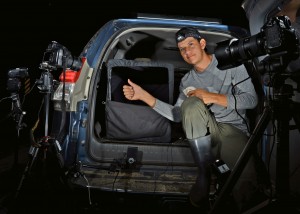 Nicaragua has diverse, robust bird list. Word of advice: don’t go down that path. If you see a bird, avert your eyes, make the sign of the cross, and say loudly and clearly, “Spawn of the devil, be gone! You do not tempt me!” 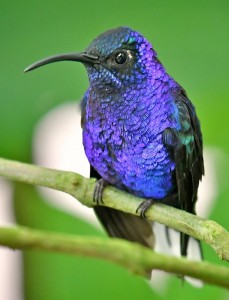 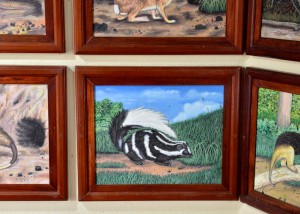 Gray Sac-winged Bat (Balantiopteryx plicata) some Ostional I did not see, and storeroom at Masaya Volcano HQ

Tricolored Bat (Glophonycteris sylvestris) 1 netted at Bastilla was at 1,200 meters in a new locality; we probably will write it up for publication

Big Brown Bat (Eptesicus fuscus) counted via detector at Jaguar, at a site has been netted in previously

Mexican Porcupine (Sphiggurus mexicanus) one in a roost tree that I could not get to; Jose Gab ended up carrying a ladder 3 km roundtrip to help out the fat gringo. Two more on night walks, Escamaca

Gray Fox (Urocyon cinereoargenteus) 1 each night on drives near Ostional

White-tailed Deer (Odocoileus virginianus) 1 at Masaya after dark; this taxa is under revision? 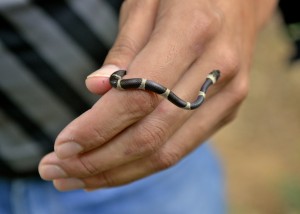 cat-eyed snake “sp” #1 (caught in a house? released near El Ostional; photo per above)

These lists do not rival those generated on tours run by Fiona Reid, but given my brief time slot and the bad weather and no caves, we still did okay — and more importantly, we had a grand time. (Better than being at work that week, that’s for sure.)