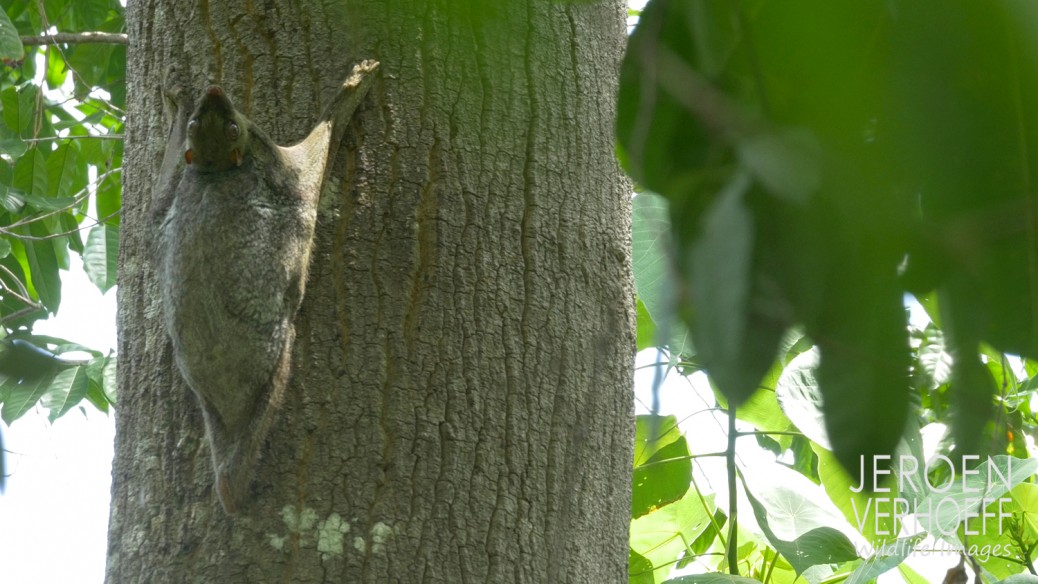 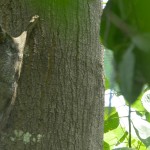 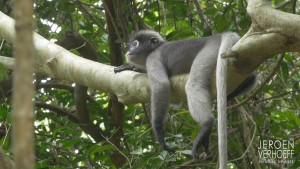 As mentioned before, my 10 year old son wanted to see the jungle and coral reefs, so we went for a 12 day, low budget, hardcore back-packing trip to Thailand. Here is a very short report, please just have the patience until my beautiful 4K film is finished!

We stayed at two camp sites, the higher one: Phonoen Thung Campsite is nice. Indeed very crowded in the weekend and somewhat hard to reach by car, but beautiful virgin rainforest everywhere. There is little walking around the campsite, it seems to be mainly good for birds and landscapes, though a sun bear was seen the day before at the restaurant. White handed gibbon, dusky leaf monkeys and Himalayan porcupine. (Please remember I had limited mammaling possibilities because I was with my ten year old 24/7).

The lower, bigger campsite Ban Crang Campsite seemed better for walking, spotlighting and mammals. The stream alongside is great with tadpoles, fish and loads of drinking butterflies (so is one close to the camp). We saw White handed gibbon, barking deer, some (giant) squirrels and dusky leaf monkeys on the campground and up to 7 Himalayan porcupine almost on our lap behind the kitchen! I @#*&$%# missed another sun bear the same day here at the restaurant too! Their visits seem rare and irregularly though. A copperhead racer, a huge nest of giant honey bees, gliding lizards and fighting green crested lizards falling and out of the canopy were nice too.

A bit disappointing was the fact that most mammals will be seen on the road and not in the forest itself. In fact driving up and down the road might be your most successful way to score new species. Like a herd of about 70 stump-tailed macaques.

I checked Baan Maka lodge (outside the park) shortly but was not really impressed, too many loose dogs anyway. The reticulated python there was a great bonus though! 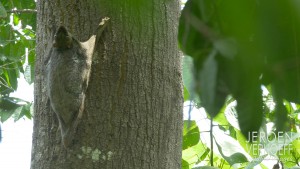 Mammals were not the main goal at the Surin islands, we went for sharks and stuff! We stayed at the second camp site at the more quite Mai Ngam Bay Campsite. Laying in our hammock at the high water line in the shade of the forest with nothing but pristiness in sight sure feels quite like pure paradise! A colugo hung around just outside camp, northern pig-tailed macaques plunder your tent, and great water monitors, fiddler crabs, mudskippers, mantis shrimp, ghost crabs and hermit crabs are plentiful. The state of the coral reefs was pretty awful in many places, but snorkelling was still way better here than in Rotterdam harbour. Loads of parrot-, puffer-, porcupine-, damsel-, clown-, surgeon-, trigger-, angel-, needle-, rabbit-, lion-, lady-, bat-, cat- and pipefish, a stingray, barracudas, snappers, one hawksbill and two green turtles, a banded sea krait and four blacktip reef sharks completed some fine swimming.

We stayed at Lam Ta Khong Campsite. Again a pretty nice place, with large greens and sambar that can literally be petted. Nice rainforest everywhere, but not as pristine and fine as Kaeng Krachan. Nice walking on the campsite, with Finlayson’s squirrels, white handed gibbon, naughty northern pig-tailed macaques, himalayan porcupine, barking deer, and two common palm civets. We did one night safari, but just like 15 years ago; it did not deliver much but 2 common palm civets and a small Indian civet. A 4 meter rock python taking and leaving her bath was really nice, just like the banded kukri snake, a tropical leatherleaf  and a majestic white lipped pit viper.

The Haew Suwat nature trail, although in dry season and almost mammal-less, still was simply beautiful. I did not spoil the dream by telling my son that the Siamese crocodile here probably was a released hybrid, also because it put up a great show for us. Grays’s forest lizards, spotted forest skinks, asian arowana’s, whirligig beetles, pond skaters and the most astonishing damsel flies I ever saw, ridiculously colourful with bizarre displaying behaviours, completed a short but very nice stay here. Guess next time I better camp on the campsite here right next to this trail! 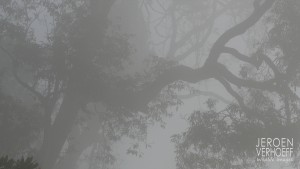 Camping in Thailand is great (why did I ever only use cabins and hotels!?), hearing all the sounds and staying right in the middle of all animals beats better bedding by far! Everything can be rented in the parks for a few bucks, often you do not even have to put up your rented tent yourself. Staff varies from non English speaking and bored to a tiny bit English speaking and a little less bored. Food and shop are not so great (ask my son!). Hitchhiking is super easy here, although be sure to watch the one way traffic schedules in KK. And don’t forget to stuff your undies with loads of towels before doing 100 km per hour rides in the back of them pickup-trucks!