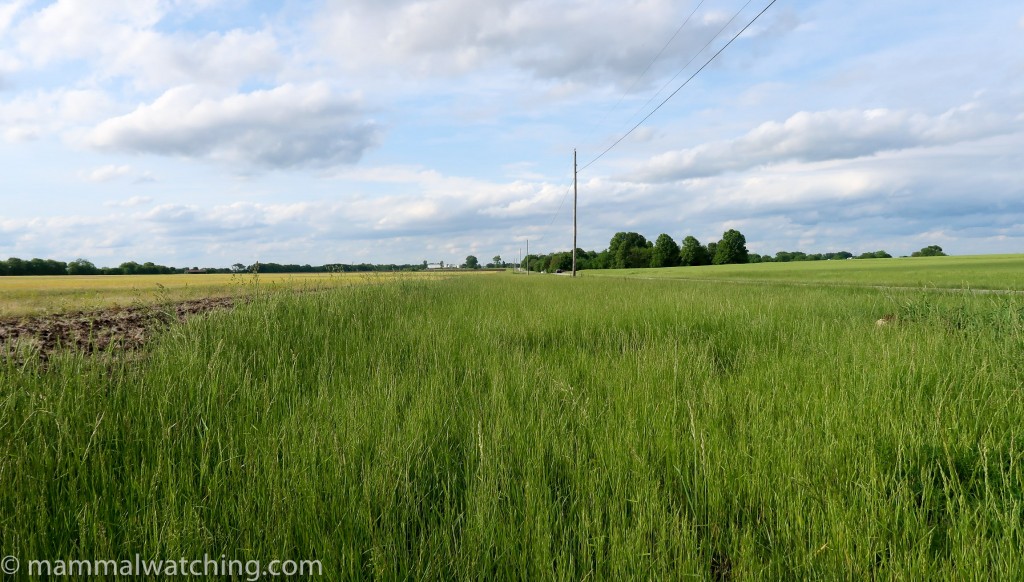 Some expiring frequent flyer miles prompted a 36 hour excursion to the USA’s midwest over the weekend. It is an area not often visited by mammalwatchers and I drove through four states – Oklahoma, Arkansa, Kansas and Missouri – that don’t as yet have any trip reports on mammalwatching.com.

In addition to four new states, I wanted to look for my first Grey Myotis, get a better look at a Swamp Rabbit and try to find a Prairie Vole. I visited three parks and 7 states, drove 1200 miles and slept very little. These weekends don’t seem as easy as they were 15 years ago, even if the scenery was a lot prettier than I had been expecting. I don’t think I saw any “Make American Great Again” bumper stickers, but I lost count of the number of billboards advertising gun shows and/or instant salvation from the perils of hell. 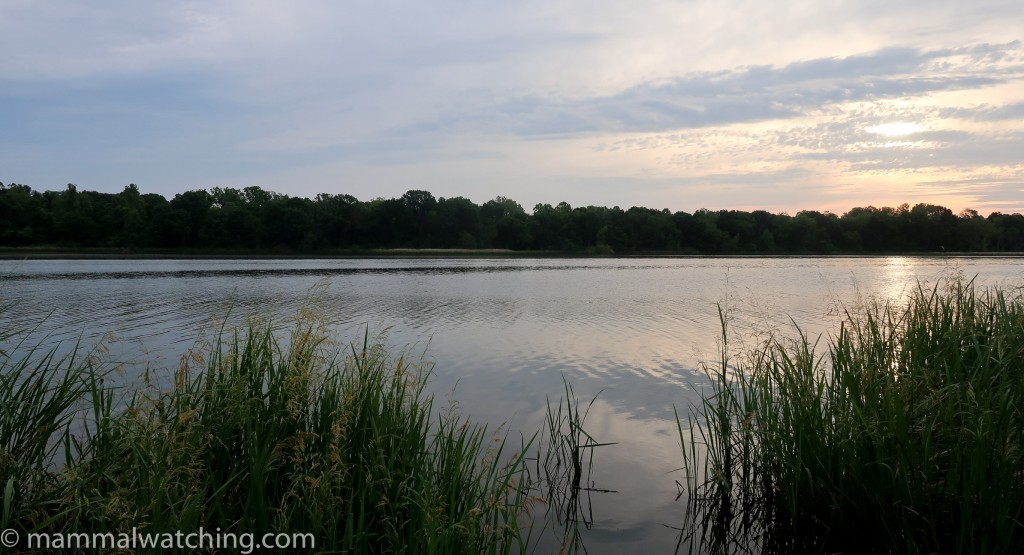 Sequoyah National Wildlife Refuge is about 3 hours’ drive from Oklahoma City airport, and I spent a couple of hours there at dawn. I couldn’t find a Swamp Rabbit – supposedly common here and my main target – but I did see a Striped Skunk out in an open field at 7 a.m an hour after sunrise. 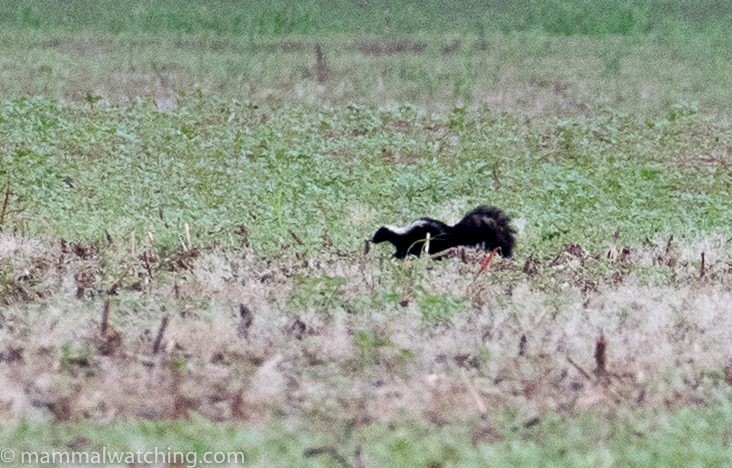 A few minutes later I was surprised to see a Bobcat dash across the road into some woodland. In the surrounding forest there were many Eastern Fox Squirrels and just a single rabbit (for a split second at the side of the road) that was most likely an Eastern Cottontail. 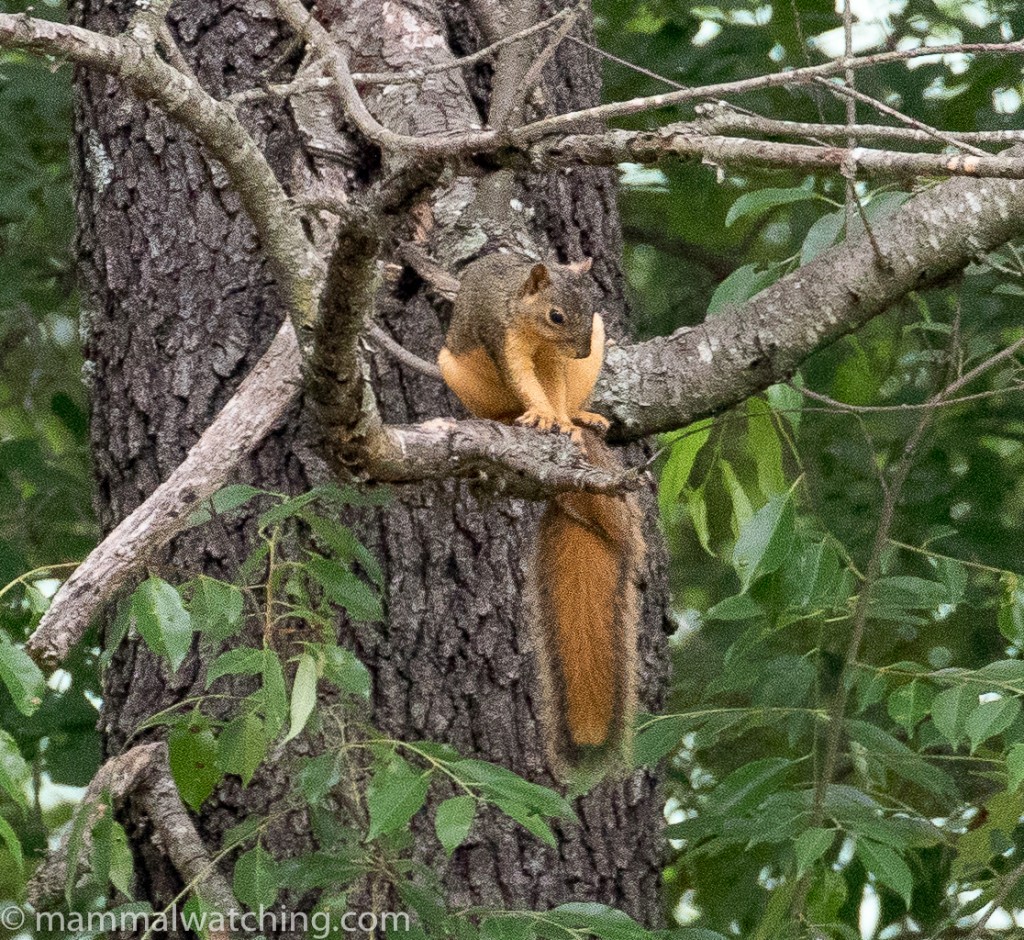 A nine hour drive which included breakfast in Arkansas and lunch in Kansas got me to Columbia, Missouri. 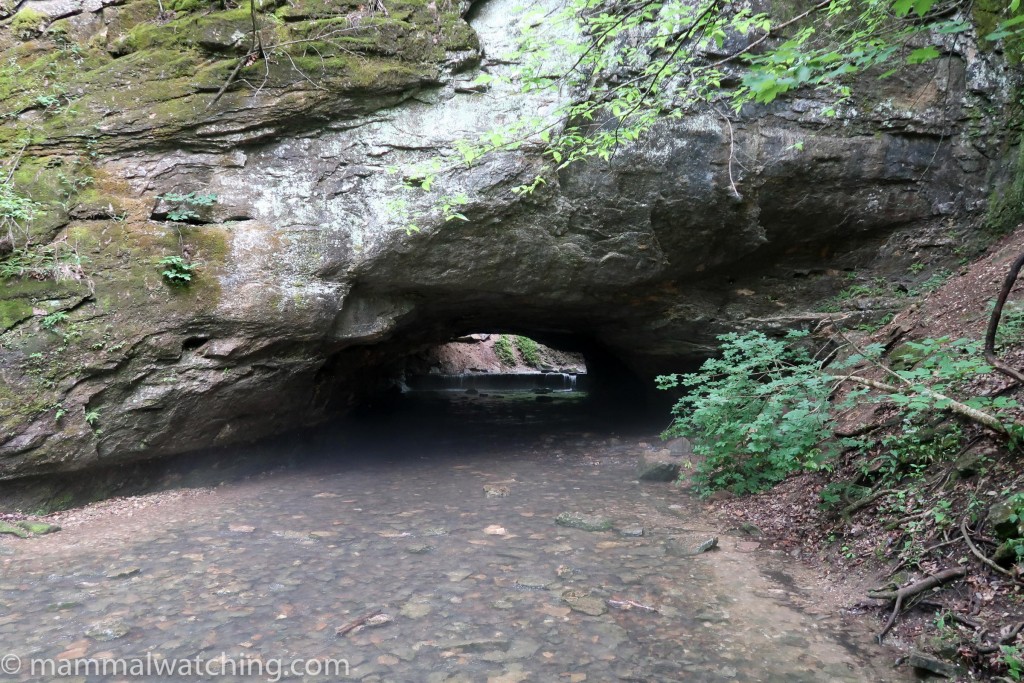 Rock Bridge State Park is home to several species of bats including Grey Myotis. The Devil’s Icebox Cave here provides home to a maternity colony of several thousand Greys, which appear not to have been badly affected by White Nose Syndrome. The same cannot be said for Little Brown Bats and Northern Myotis, both of which have been lost from the caves here. In the summer a few Big Brown Bats are also in residence, with additional species in the winter. 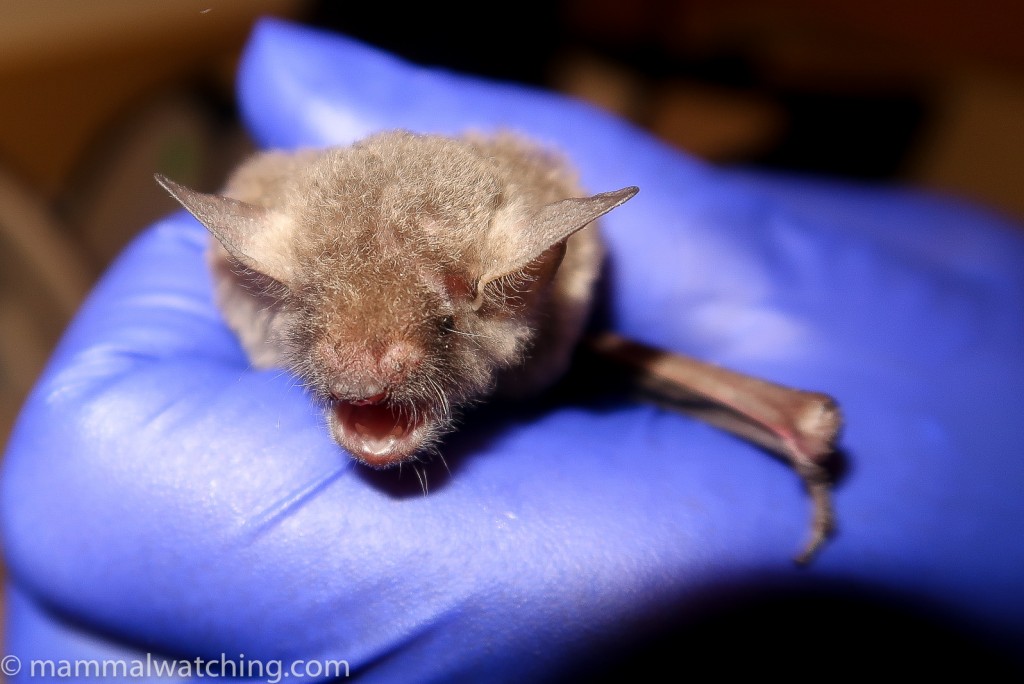 When I told Fiona Reid I wanted to see a Grey Myotis she put me in touch with Missouri bat scientist Sybill Amelon. Sybill, who runs bat surveys throughout the summer, was generous enough both to invite me along and to organise netting while I was there at a spot that ought to produce a Grey Myotis.

But Sybill couldn’t do anything about the weather even though we tried to pretend the forecast was wrong: a torrential thunderstorm began just as we had almost finished setting up a triple high net near the rock bridge. We gave up on the bats and went back to Sybill’s place where she showed me a few of the many bats she is caring for including a Grey Myotis. It was interesting to see Grey and Northern Myotis side by side. Colouration apart, the Northern Myotis has much longer ears (which pull forward past its nose), plus the tail membranes of the two species are quite different.

In Grey Myotis, the membrane fastens to both the inside and outside of the bats’ ankles. 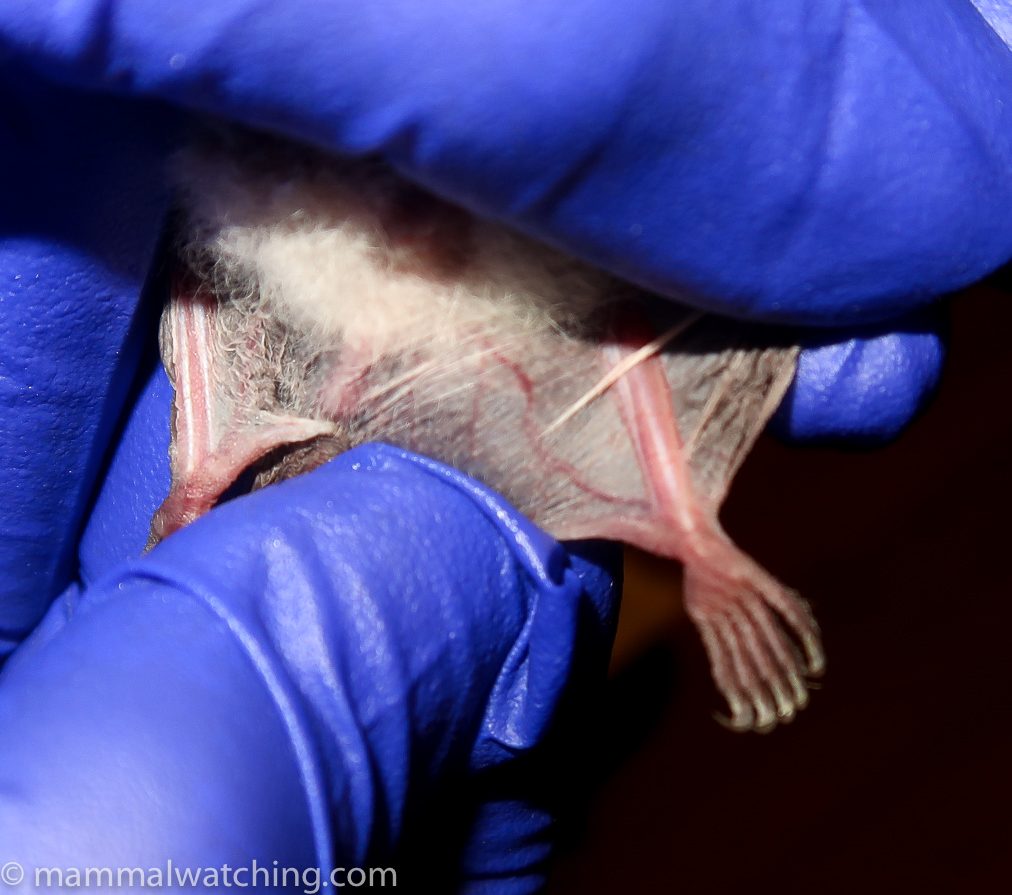 In the Northen Myotis, the membrane fastens to the inside of the ankle too. But on the outside of the feet it attaches at the base of the toes. 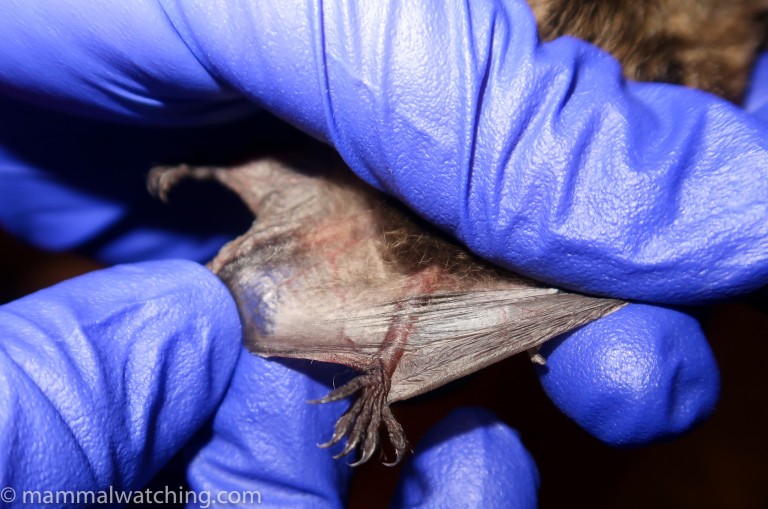 Next morning the rain had almost stopped at 5 a.m. so I returned to the caves. Sybil and her Ananbat met me there (which was above and beyond the call of duty and proving yet again that bat biologists are the absolute best!). There was very little bat activity but from the boardwalk above the Devil’s Icebox Cave I did see one or two bats fly into one of the cave entrances just before sunrise. Sybill’s bat detector confirmed they were indeed Grey Myotis (which have a distinctive call trace). Mission accomplished. In better weather you can usually see the Grey Myotis flying around the parking area here.

I saw a few Eastern Fox Squirrels and a White-tailed Deer in the park too.

I looked for Prairie Voles at Tucker Prairie briefly (30 minutes east of Columbia), but the foul weather at night squashed my plans to look around there at night. 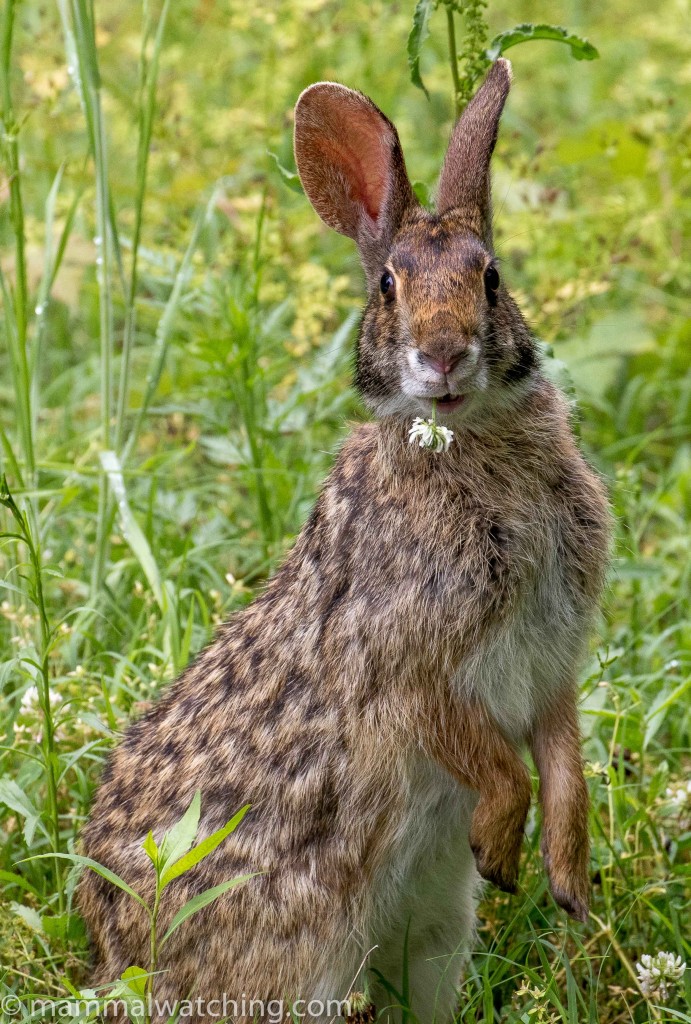 My final stop – in the south east corner of Missouri – involved an hour’s detour along the 6 hour drive from Columbia to Nashville Airport.

Curtis Hart told me that Swamp Rabbits are easy to see here at dusk and dawn. I stopped in for 20 minutes at midday and found a confiding animal at the start of the trail (which begins at the end of the short park road). I also saw several Eastern Fox Squirrels along with – what I assume was – an Eastern Chipmunk shooting across the road. 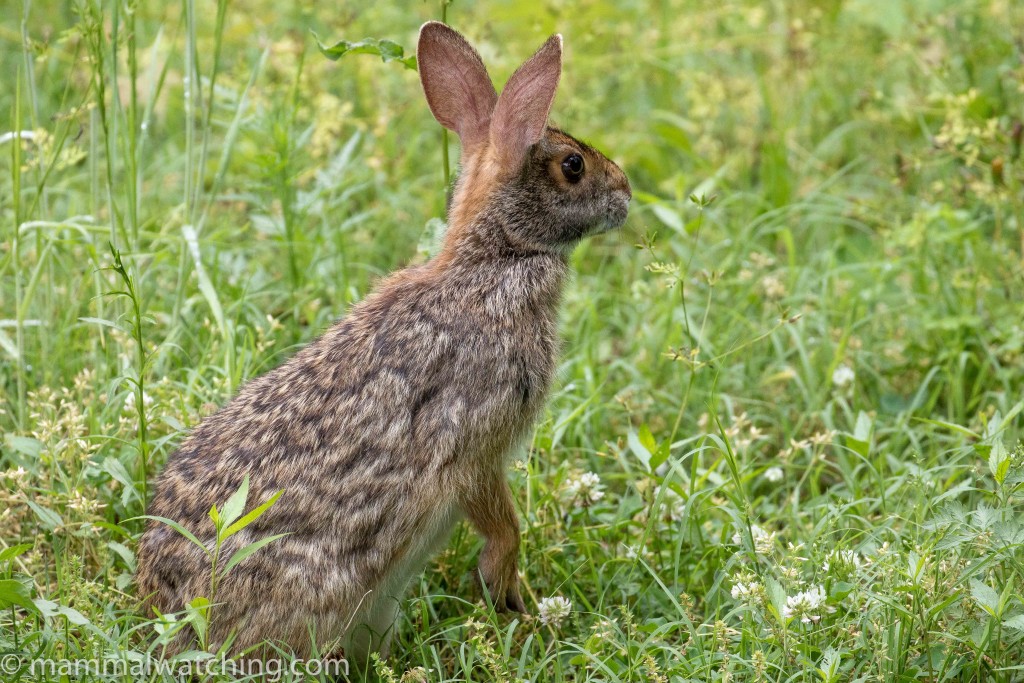 And from there it was another 3 hours, across the Mississippi River, through Illinois (very briefly), Kentucy and Tenessee to Nashville Airport.