A few sites (and fewer mammals) for Albania, Macedonia and Greece 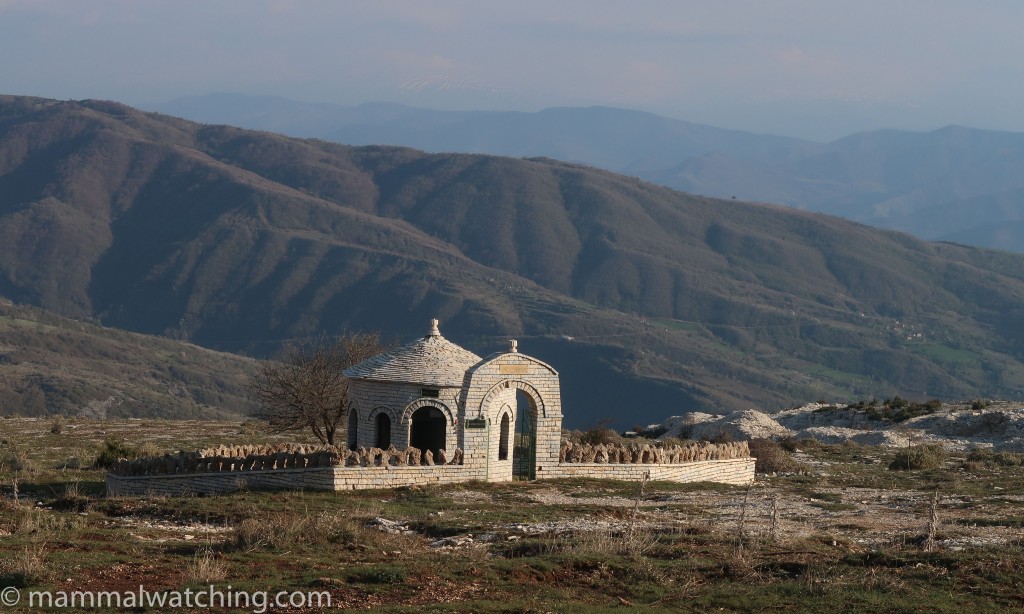 I spent the easter week driving through the Balkans with my daughter Katy. This was not a mammal trip: Katy made sure of that in her own inimitable way. But I did bring a box of traps along, even if I didn’t spotlight or do much else mammal related. I did though find out a few interesting snippets of information and get lots of advice from some very helpful  mammalogists which I share here.

We spent a couple of nights in Albania. Driving around was easy though be cautious using Google maps with Albanian roads. What was meant to be a 3 hour drive from Polican to Gjirokaster, on what I imagined was a “main” road, ended up 5 hours on a 4wd track that was rugged even by Australian standards. 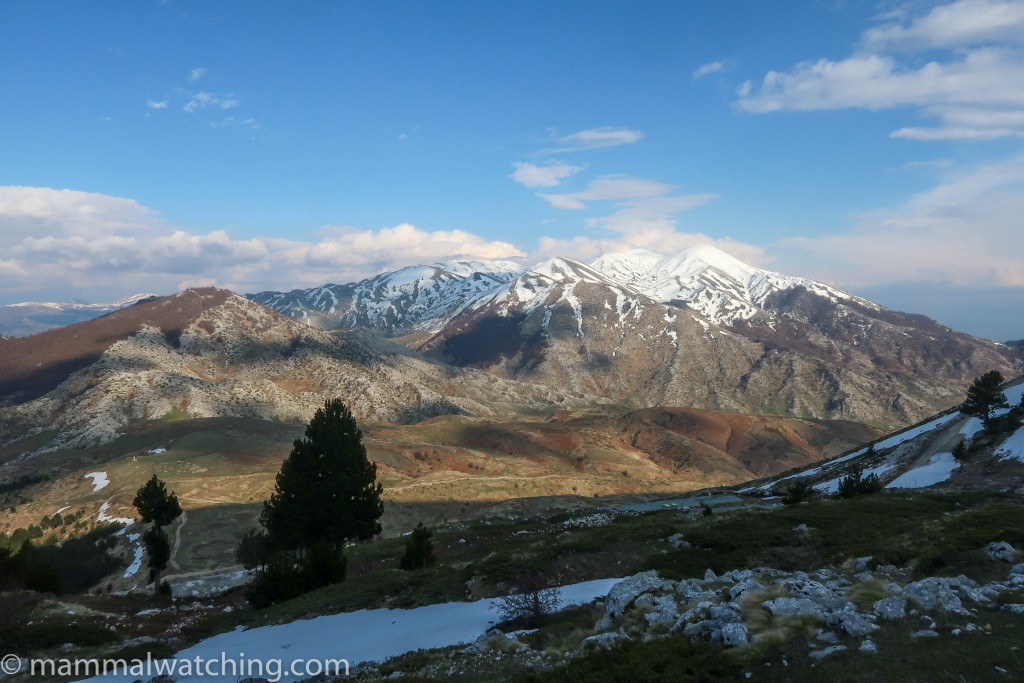 Professor Ferdi Bago from the University of Tirana was very helpful in advising me on sites I could look for several species (see  this paper of his for instance). He put me in touch with Daniel Jablonski from Slovakia who was one of the authors of this paper, describing the first records in Albania of Snow Voles and European Pine Voles. Daniel was also super helpful about sites on Mount Tomorr.

The closest accommodation to the trapping site that I could find was in Polican at an AirBnB. Another hour or so’s drive up Mount Tomorr (along a good dirt road) would have got me to the right area. But there was still snow on the mountain and we ran out of road near Teqeja e Abaz Aliut, a well known tomb/shrine, 15 minutes and several kms short of the trapping site.

In the summer time you might be able to stay at the shrine. Camping would also be possible I imagine just about anywhere here.

Daniel had caught Snow Voles and Pine Voles in the autumn and above the tree line, 2000 metres up. We caught three Wood Mice in traps near the shrine (around 1500 metres elevation). 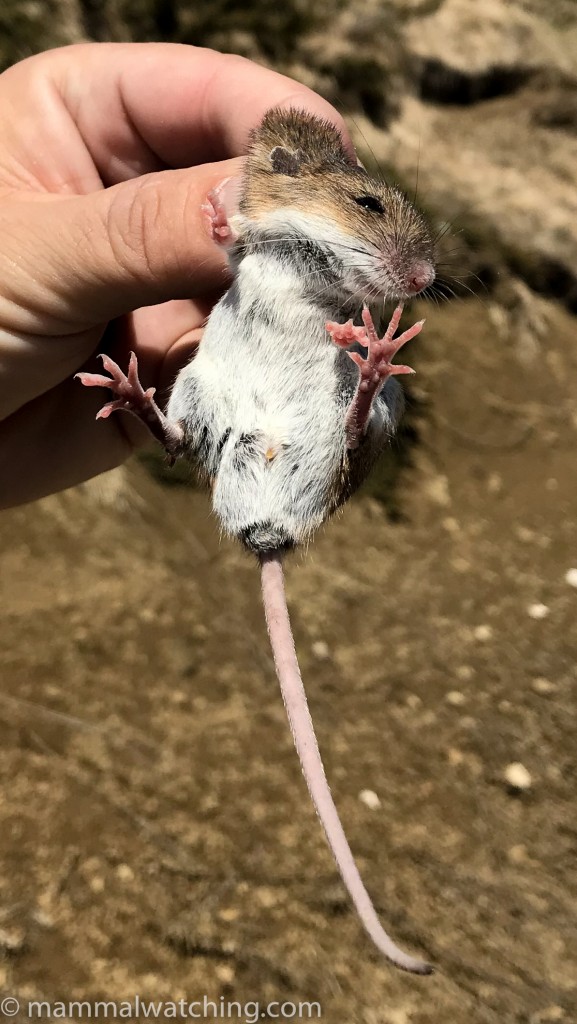 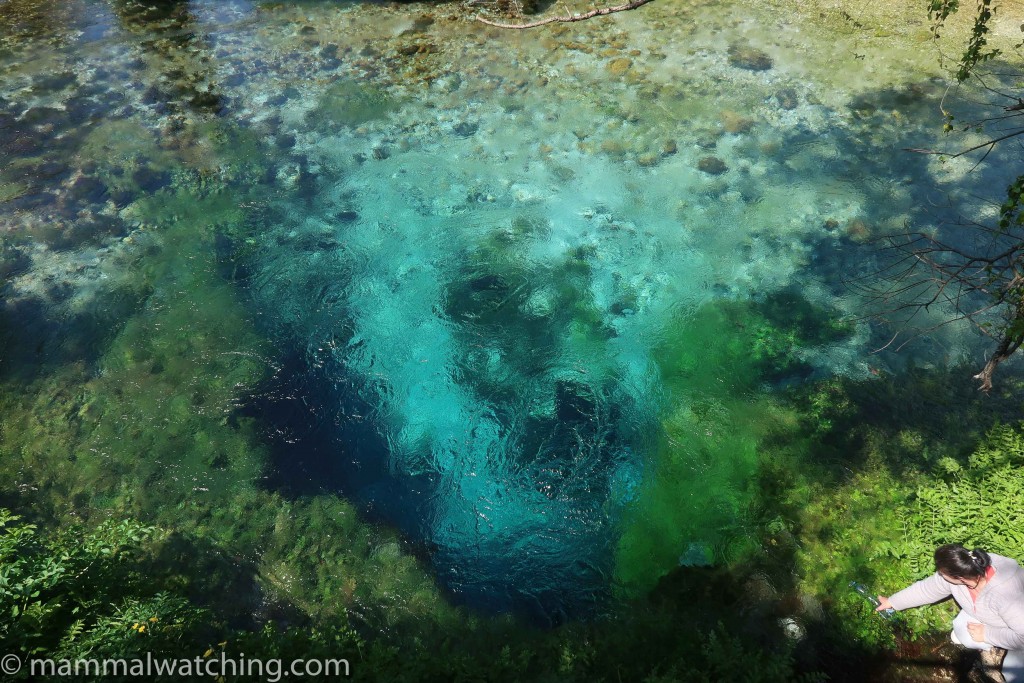 The Blue Eye is a well known tourist spot about half an hour’s drive from Gjirokaster. The information board said the caves around it are home to Albania’s only known colony of Bechstein’s Bats. I don’t know anything more than that.

Albania’s recent history means that very little work had been done on mammals there and there is lots to be discovered in the country still.

We spent a night near Lake Kerkini in northern Greece, at the Hotel Villa Belles. I caught two Macedonian Mice in grassland along the road close to the hotel. Quite easy to identify from House Mice by their short tails (much shorter than their head body). The only new species of the trip for me. 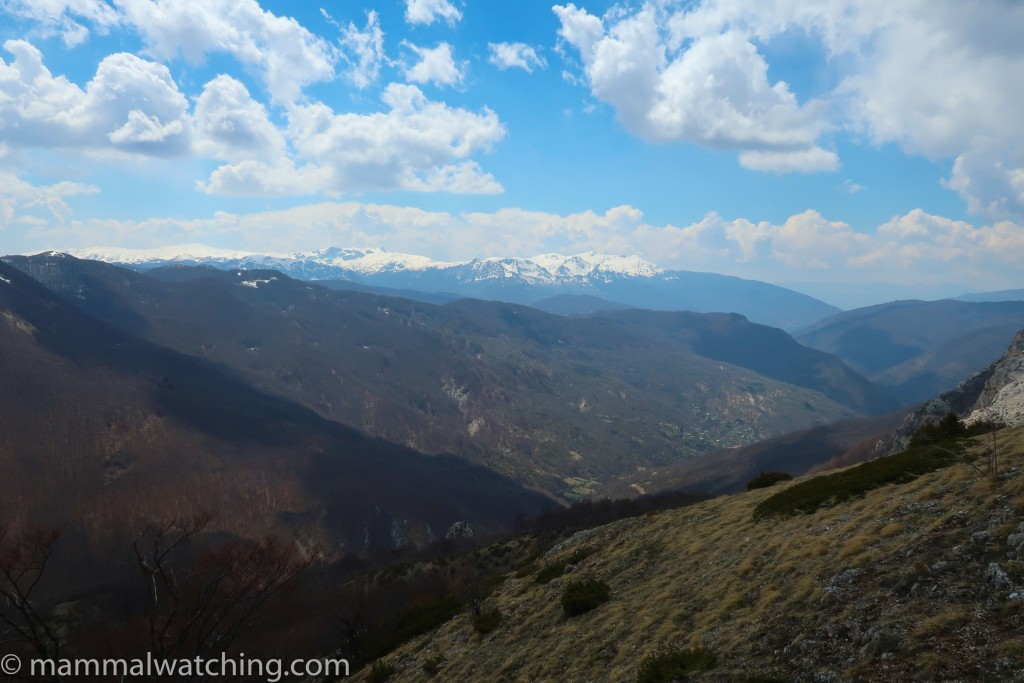 Mavrovo is a stronghold for the Balkan Lynx, the smallest and rarest of Lynx subspecies. Perhaps fewer than 60 animals remain in the Balkans and there are at least 10 using Mavrovo National Park. I got in touch with Dime Melovski from the Balkan Lynx Recovery Program.  Although he was extremely busy with field work he offered to take me around the park for a day though there was very little chance of actually seeing a Lynx. 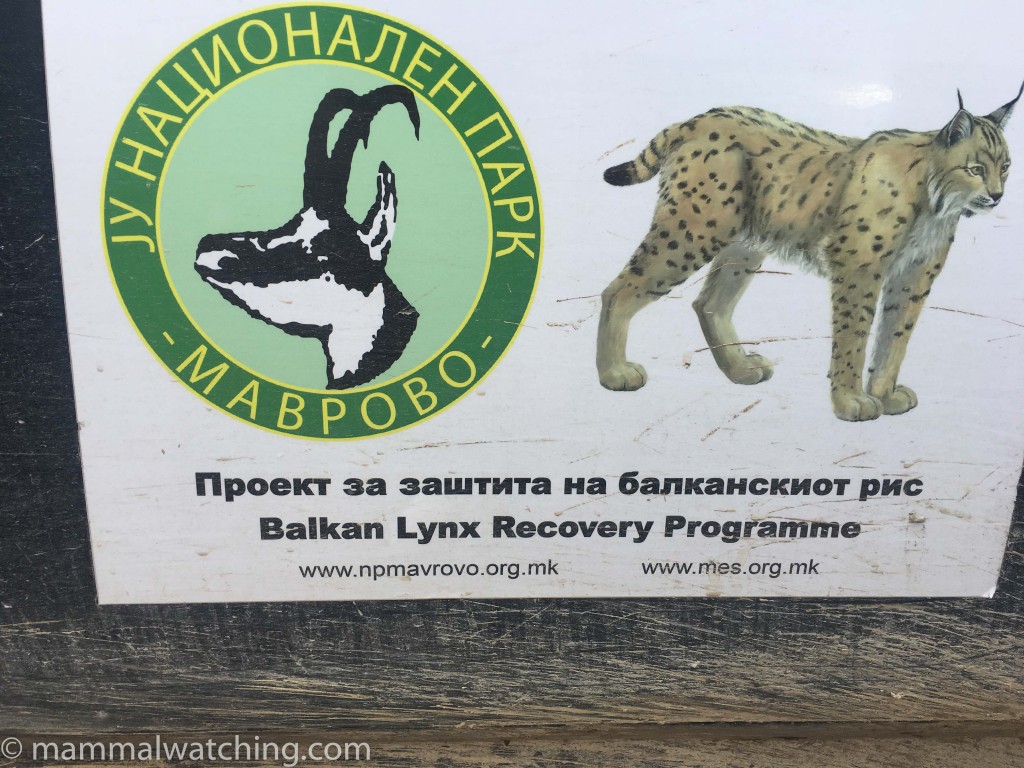 Mavrovo is beautiful and Dime was a fantastic guide, passionate about his work and generous with his time. Unfortunately I had missed the Lynx fieldwork for the year: between February and April they had been trying to catch and collar Lynx, and had caught two animals.

Lynx are seen once in a very long while outside of fieldwork: Dime has never seen one by chance in all his years. He arranged for the pair of us to meet up with a ranger for the day to hike through the southern area of the park and count Chamois. Lynx are in the area, as are Brown Bears and Wolves. Great scenery was guaranteed. 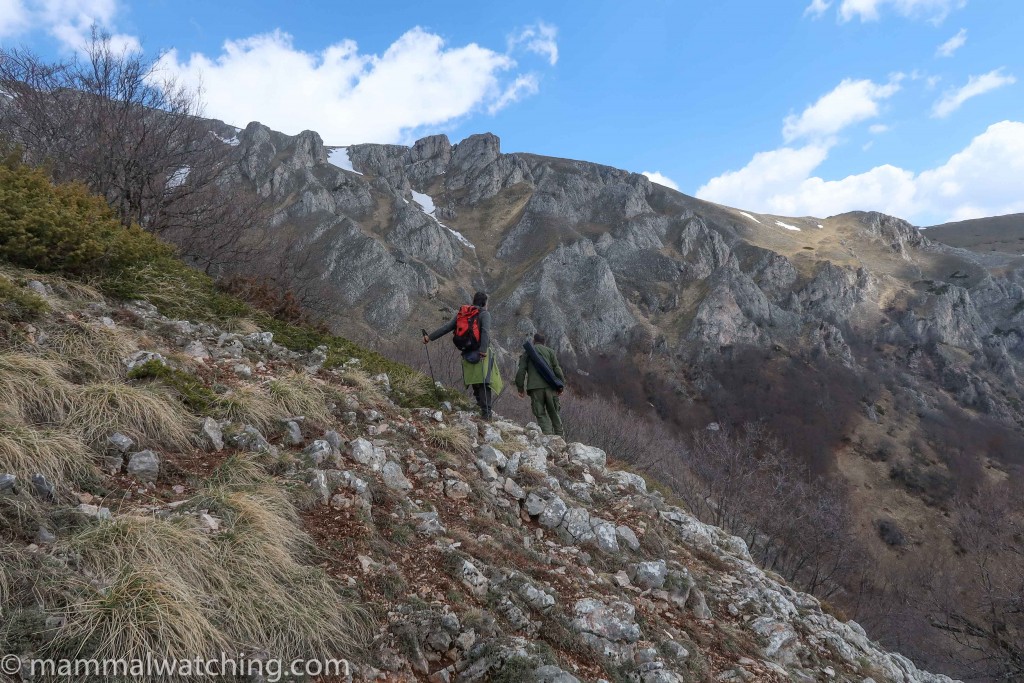 We hiked along an old trail that had been built for President Tito who had had exclusive rights to hunt this section of the park back in the days of Yugoslavia.  Lynx are camera trapped along the trail fairly often. We didn’t see any but did see fresh Bear poop, old Wolf poop and at least 30 Chamois (from the Balcanica subspecies) on the high pastures. There was also a lot of rodent activity above the treeline. Presumably from voles but I am not sure which species.

The Balkan Lynx Recovery Program also covers Albania and Kosovo and has been working for 14 years. Though the Lynx remains critically endangered here, it does sound like the program has had success and is helping to both study and protect the last animals. Dime and his team must be the best hope the subspecies has to survive.

Dime was kind enough to invite me back to visit the project during fieldwork next winter (yes, Balkan mammalogists are the friendliest of all). I would love to get there. Naturetrek are also running a trip next year to coincide with the trapping I was told.

Although Lynxes are extremely hard to see here, it must be one of the most attractive places on earth to look for them. So well worth a visit if you are in the area. 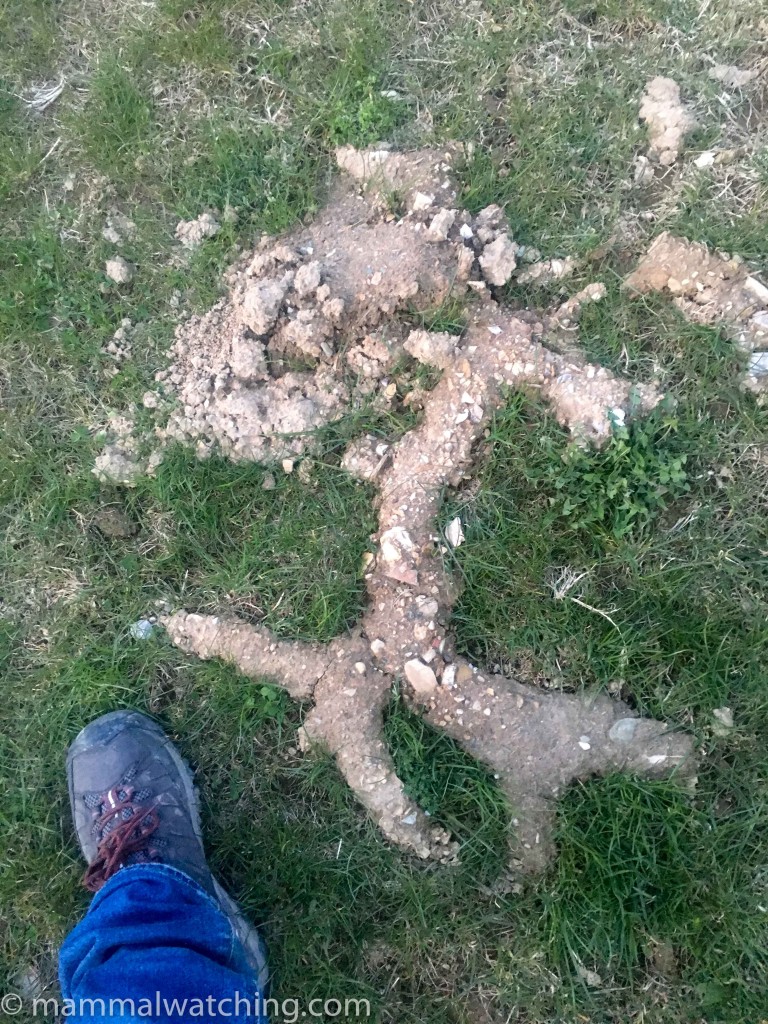 Back at the fancy Radika Hotel on the shores of Lake Mavrovo, the lawns were alive with diggings. I am still not sure if the network of holes and tunnels were made by moles or voles, quite possibly both. I got a very partial view of one animal at the entrance to a tunnel in the late afternoon. It looked like a mole, but there are three species there: European, Balkan and Blind Moles, and impossible to say which one from what I saw. Indeed my view was so brief it could have been a vole.

The only other mammals I saw in Macedonia were a House Mouse and a Wood Mouse, both trapped at Kriva Palanka close to the Bulgarian border. 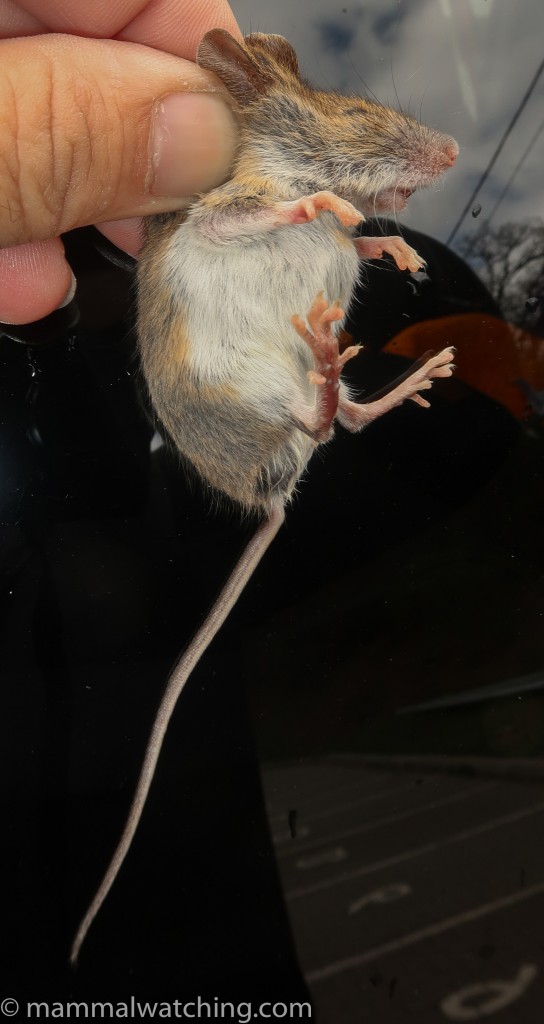 Thank you again to all those who answered my emails. And thanks especially Dime Malovski from the Balkan Lynx Recovery Program for showing me around Mavrovo. Balkan scientists are the best! I hope to return before too long during a better season for small mammal trapping. There is some nice stuff to look for in Bulgaria too. 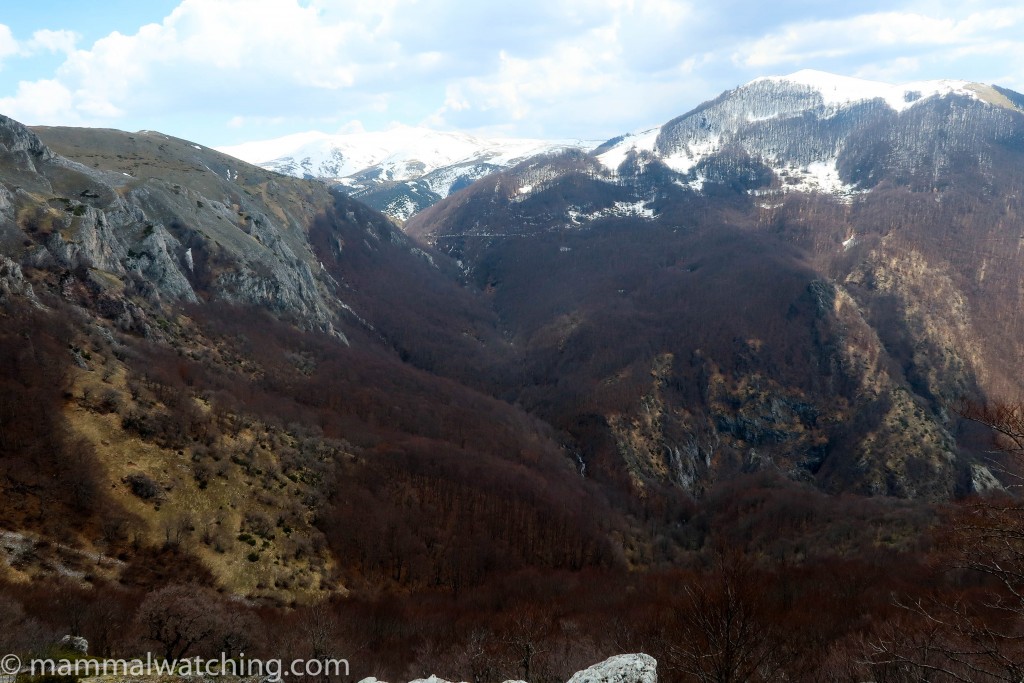