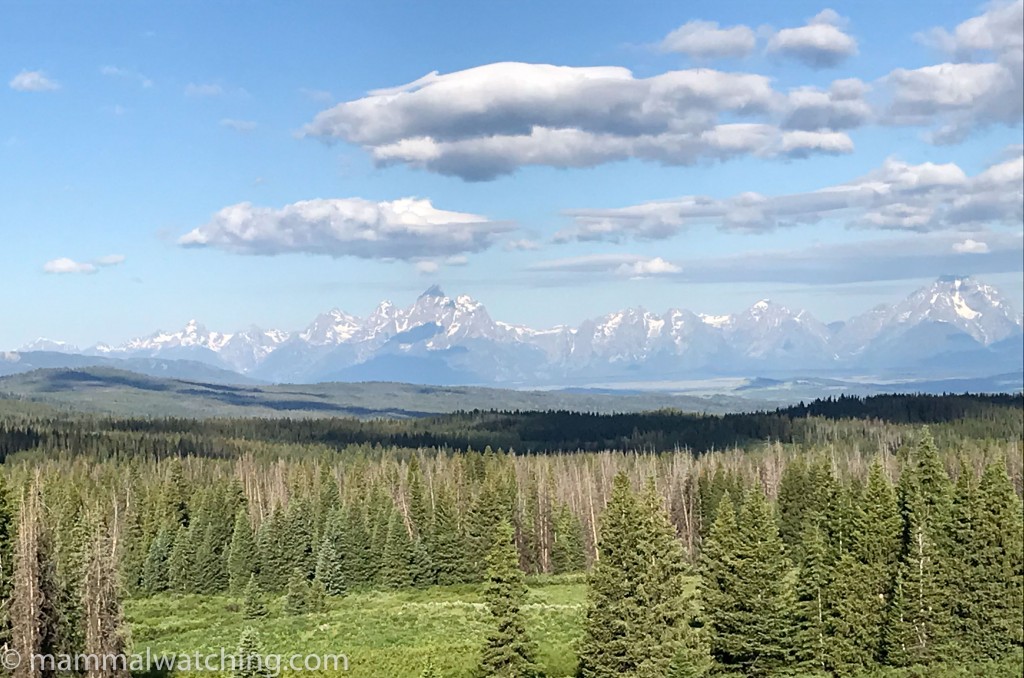 My two teenage kids – Patrick and Katy – spend each July in the USA with me. The days when I could drag them off – especially my daughter – on an intensive mammal watching trip are long gone. In fact, looking back, I am not sure those days ever truly existed. Trouble is I suffer a panic attack if I imagine spending more than a day or two of my vacation anywhere without even the chance of a new mammal.

So this year I sold them on a road trip across the middle two thirds of the northern USA, from Cleveland, Ohio to Salt Lake City, Utah. We would, I promised, visit countless theme and water parks; enjoy delicious ice cream; spend just a few hours in the car each day; see several US states that we hadn’t yet set foot in; and have quality time with friends. And I muttered – maybe, just maybe and only if there was time – I would look for a mammal or two on the way. I swear my intentions started out good. But the kids made a significant mistake in leaving the details to me. The plans very gradually shifted: a grassland here … a national forest there… a skipped amusement park there. Death by a thousand voles.

In the end we drove 4500 miles in 11 days. Even by my usual standards this became a bit excessive: it meant a minimum of 6 hours in the car every day. We visited just two theme parks and only one water park (and then only for 2 hours). But – upside -I did see 6 new states (leaving just West Virginia and Hawaii to go), two sets of good friends, four new mammals, a bona fide tornado and some stunning scenery. And we are all still speaking to each other (though – I must be honest – that was often not the case during the trip). 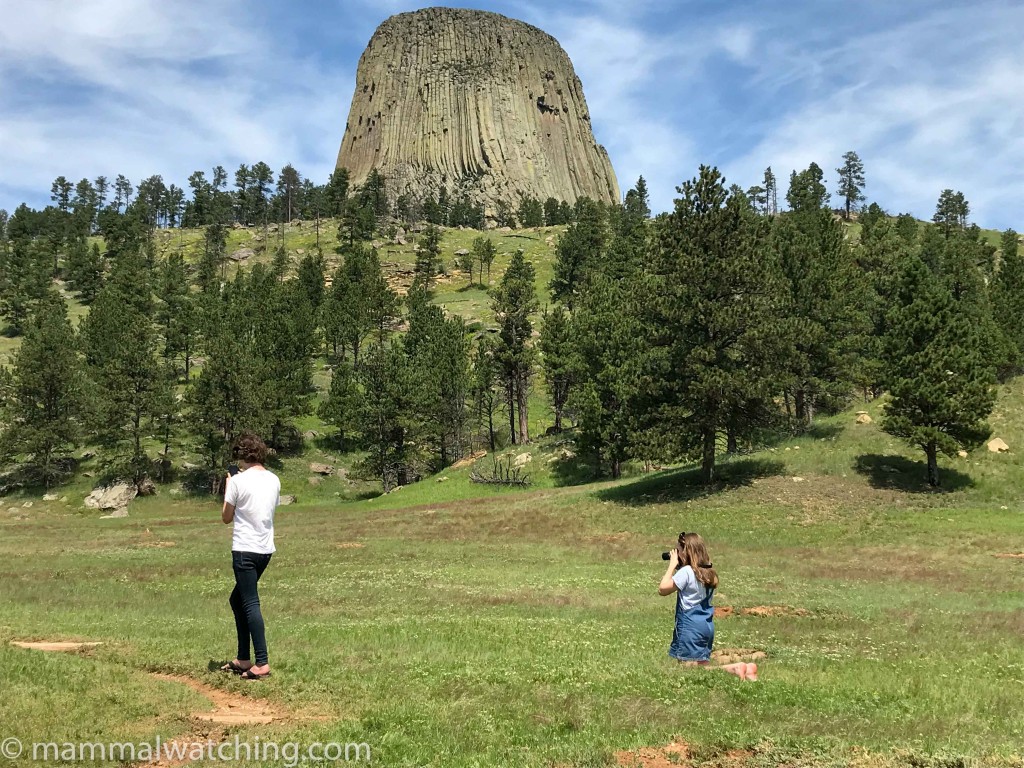 Patrick and Katy Prairie Dog watching at the Devils Tower

And so the vacation fell somewhere between a road trip with mammals and a mammal trip with roads. The mammaling mainly comprised me setting a few sherman traps most nights, plus a couple of hours spotlighting in North Dakota and a day with Matt Miller in Idaho.

Here are a few of my more interesting observations and misses. 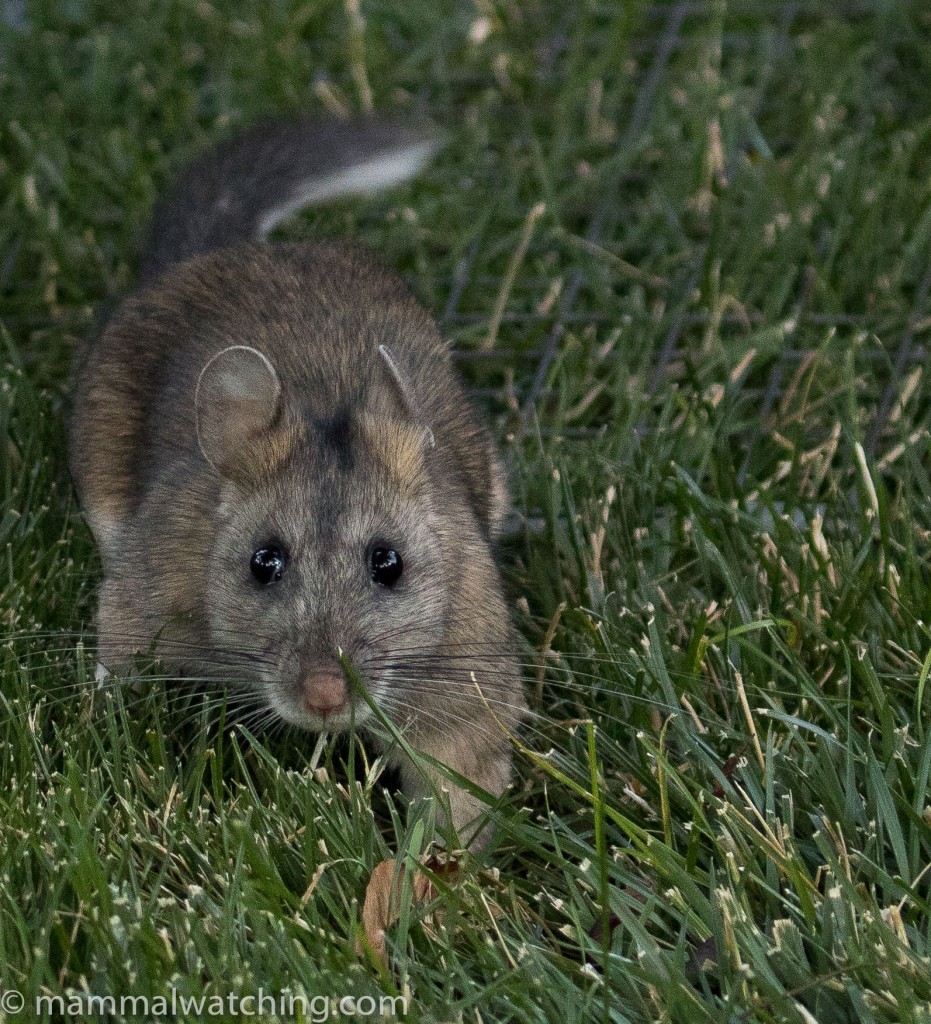 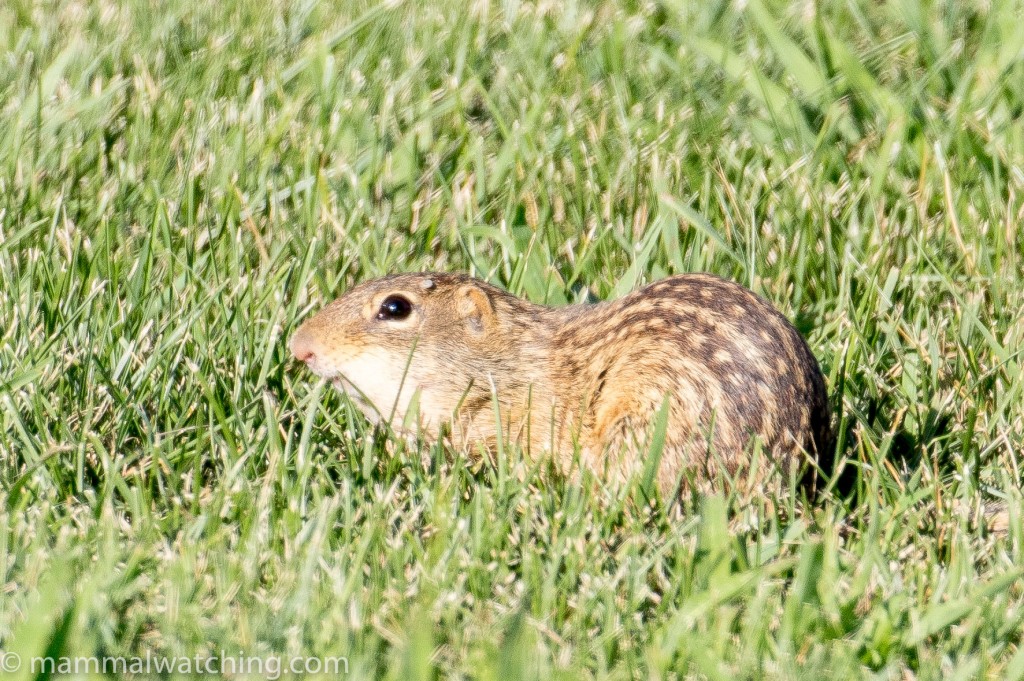 The cemetry – in the middle of Hazel Green (close to Dubuque and the Iowa border) – was swarming with Thirteen-lined Ground Squirrels in the late afternoon. I saw a Black-tailed Jackrabbit here too.

We drove up to North Dakota mainly so we could say we had been to North Dakota. But I had found some video on youtube of both Northern Flying Squirrels and Prairie Voles near the  town of Grand Forks. I got in touch with Carl Barrentine – the guy who shot the videos – who gave me some pointers and also connected me with Bob Seabloom a local mammalogist. Despite their advice on where to look I struck out with both species.

During a couple of hours thermal scoping among large trees near the university campus and in Riverside Park we could not find any flying squirrels.  And the traps I set in fallow fields just south of Kelly’s Slough NWR caught nothing other than a lone Deer Mouse: Carl had filmed his Prairie Voles around here. 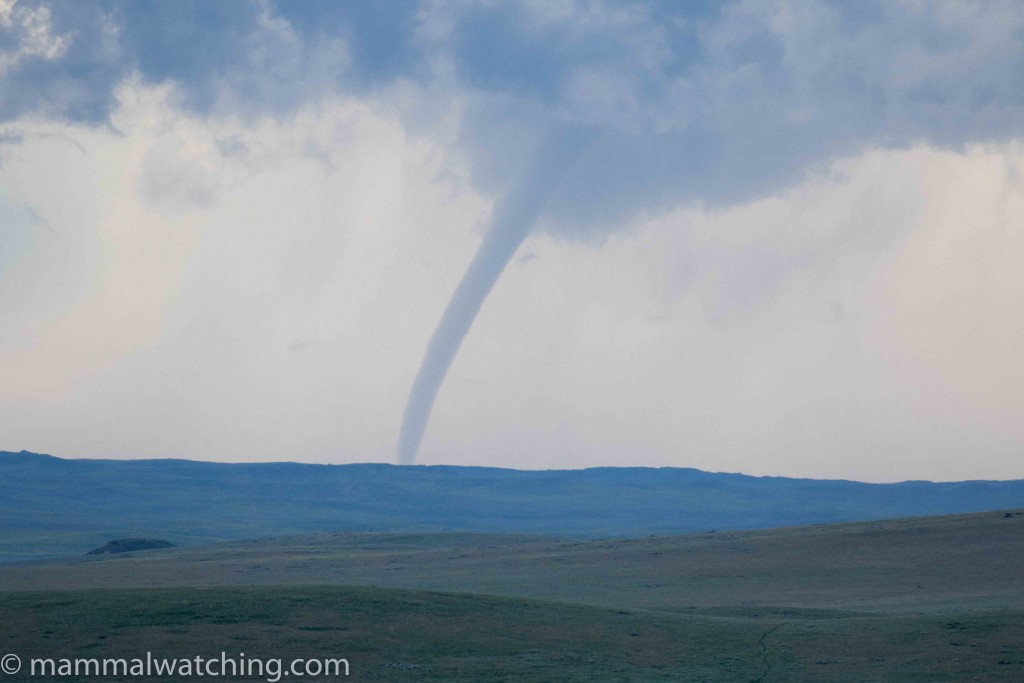 I had planned a night on the Thunder Basins National Grasslands, where I wanted to cruise the roads in search of Prairie and Sagebrush Voles and Northern Grasshopper Mice. But a tornado across the valley from our campsite, followed by an enormous lightning storm overhead, cut short our camping plans. My kids, it seems, are wimps. No mammalwatching that night. 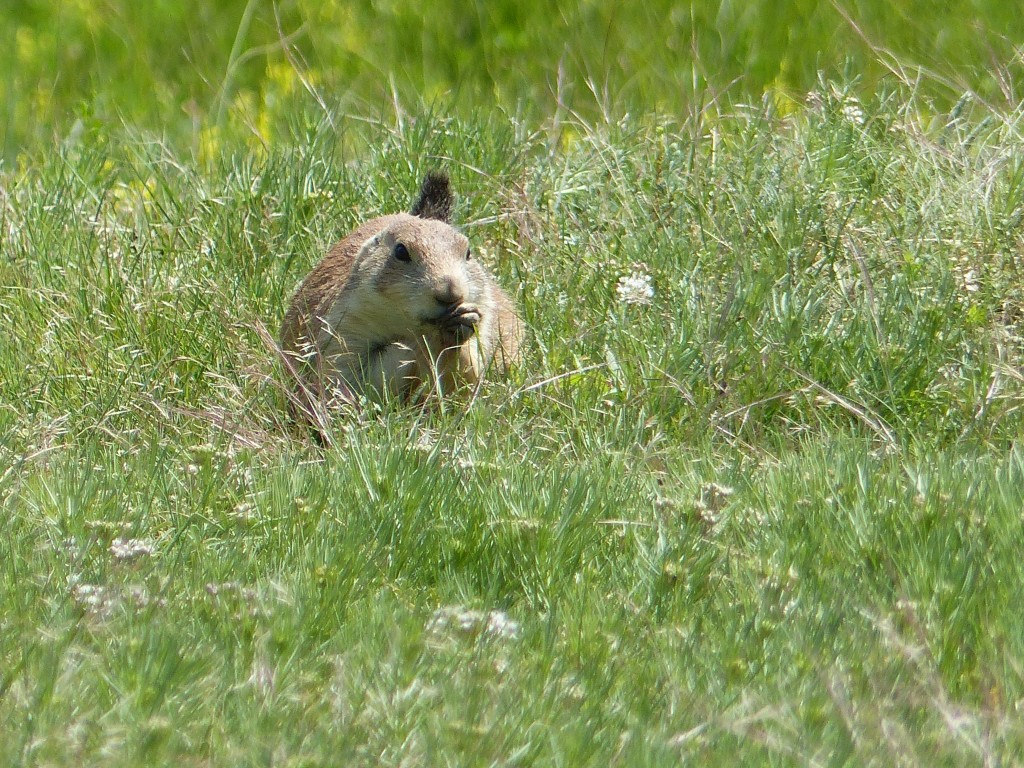 We spent a night near Dubois, south east of Grand Tetons National Park, where I set some traps among dense cover along a minuscule forest creek. Both Long-tailed Voles and Water Voles have been trapped here before. I caught a single Long-tailed Vole (my first new mammal of the trip) and three deer mice. 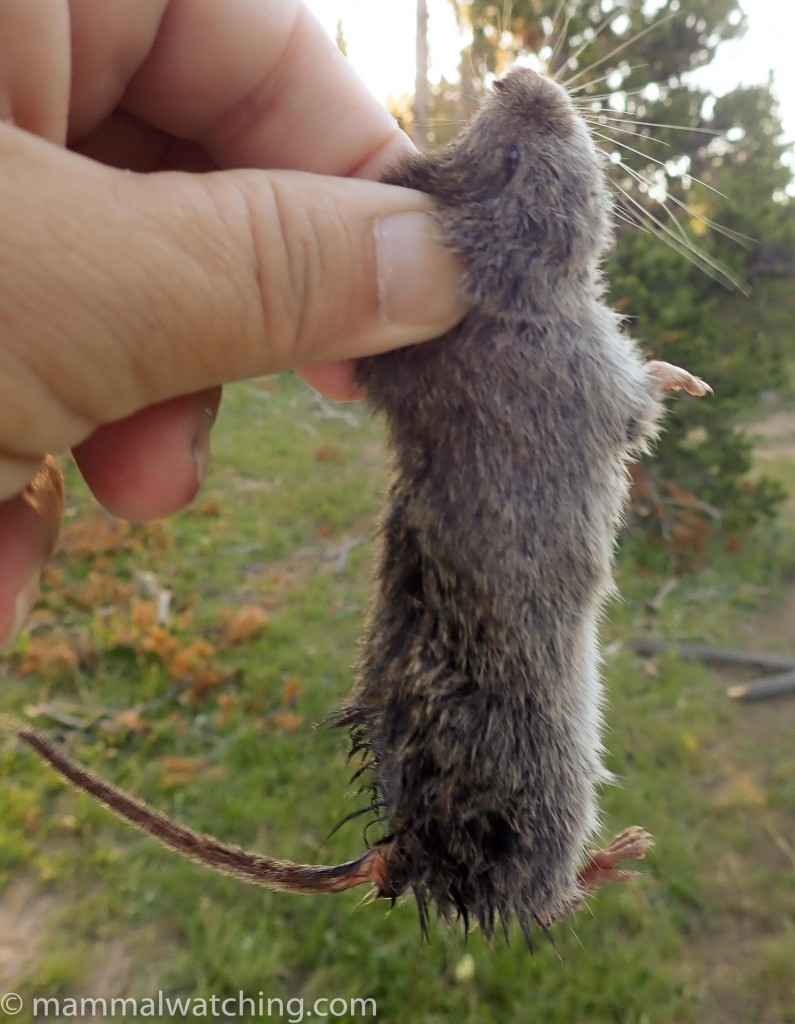 It took me a while to decide whether this animal was a large Long-tailed Vole or a small Water Vole: the measurements overlapped with both species. The six pads on its hind feet was the determining factor (Water Voles have five). 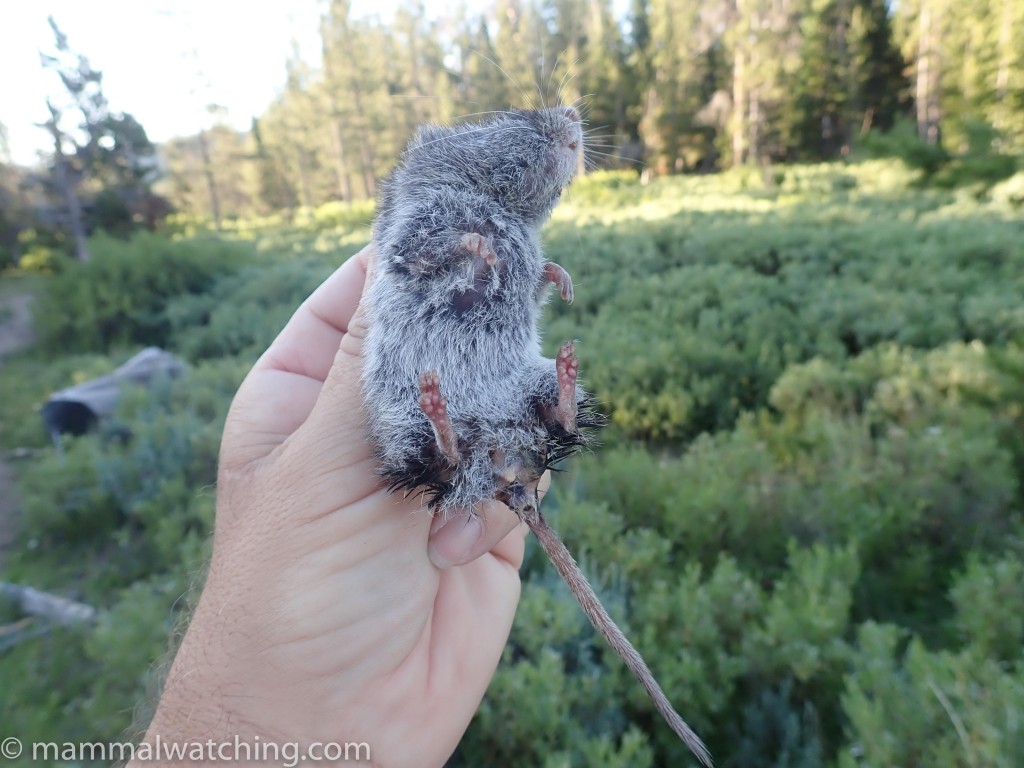 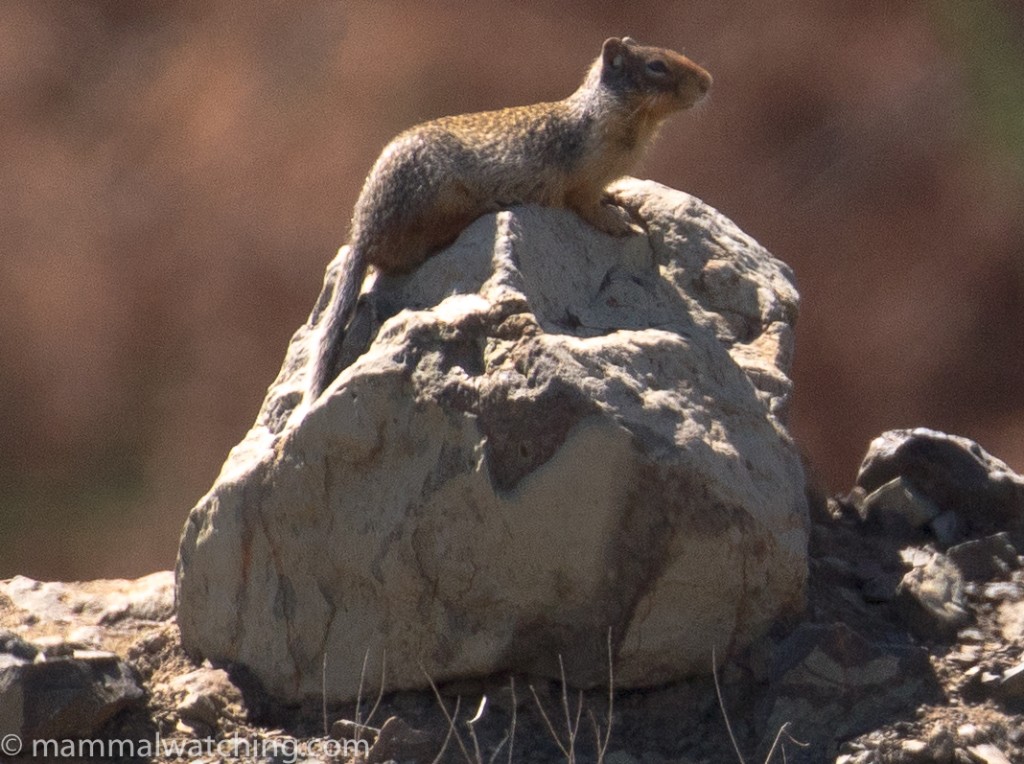 I saved the best mammaling for the end of the trip, with a return to Boise to stay with Matt and Jennifer Miller.

Matt is a regular contributor to mammalwatching.com and writes a fabulous blog for The Nature Conservancy. I’ve known the Millers for 10 years since Matt first got in touch offering to help find me an American Badger (an offer I was impolitely fast to accept). He has also helped me, and other mammal watchers, to find a variety of ground squirrels and other Idaho specialities over the years. I was very happy to see them again and meet Derek, a 4 year old addition to the Miller family, and budding mammal watcher (he has already seen a Long-tailed Weasel of course).

When I told Matt I was thinking about coming to Idaho he suggested we could go see the recently split Northern Idaho Ground Squirrel. In fact it was Matt who had first shown me Idaho (now Southern Idaho) Ground Squirrels near Boise. He also thought we might be able to turn up a Bushy-tailed Woodrat and Northern Pocket Gophers around his house: both were species I had looked unsuccessfully for last time.

As always Matt delivered the goods during our two night stay. 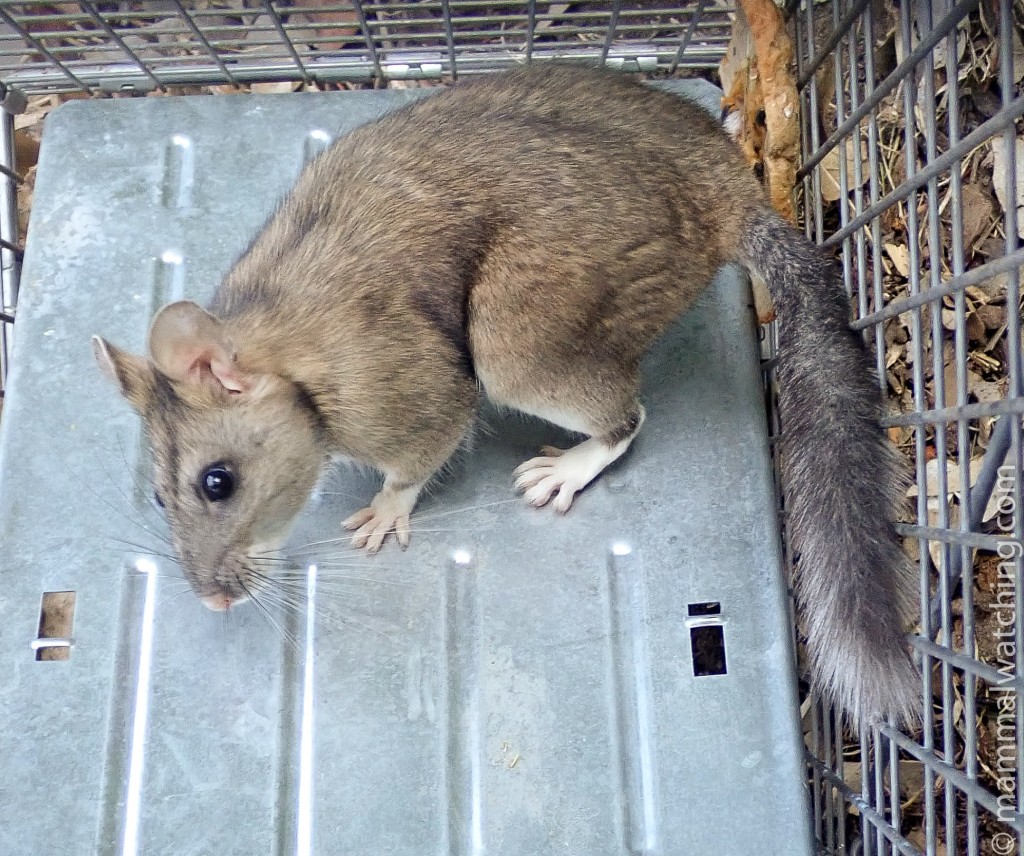 Although it had been several months since he had seen the Bushy-tailed Woodrat that used to live in his woodshed we set a few traps. Next morning we had one: caught in Matt’s large havahart trap. The rat ignored the 15 sherman traps I had scattered across the garden. A lovely rodent with a fabulous tail.

Just look again at that tail. 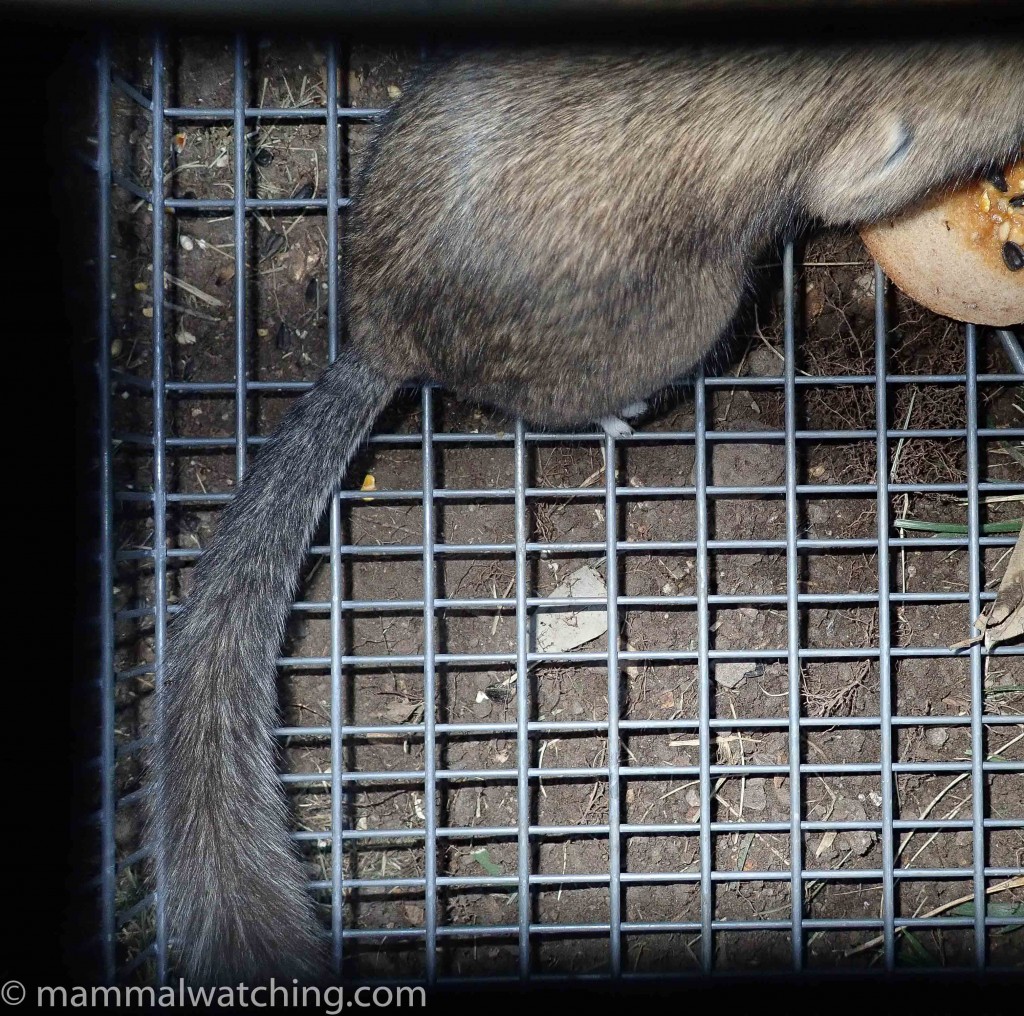 Our next stop was a well-studied colony of Northern Idaho Ground Squirrels near Tamarack, 2.5 hours from Boise. Although the adults were already aestivating, the researchers thought the juveniles would still be active.

It didn’t take Matt long to spot one.  It took me a nervous 15 more minutes to spot mine. Once again I had seen all of the USA’s ground squirrels. And peace was restored to the universe. 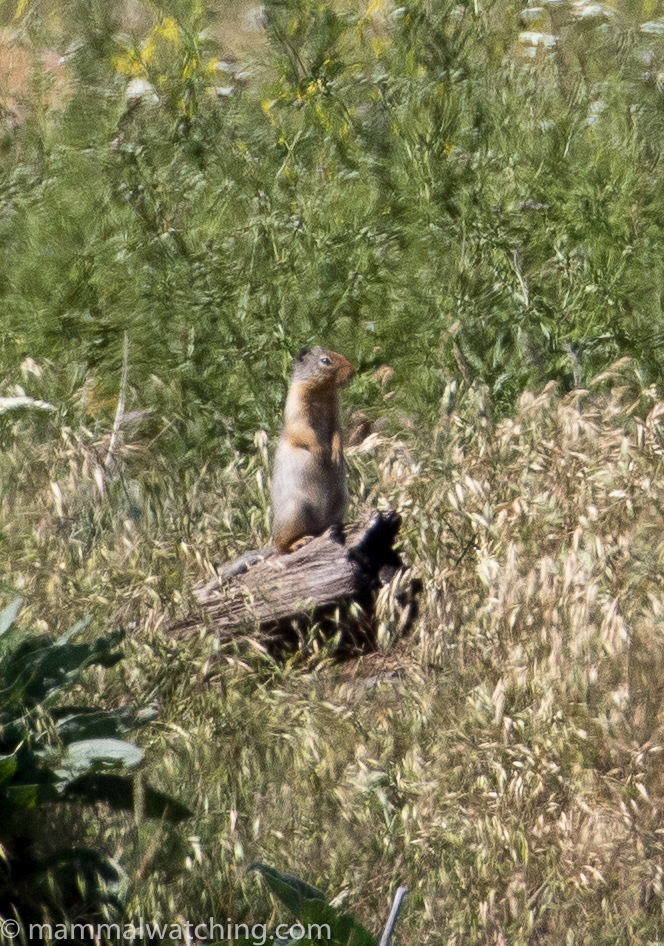 There were larger Columbian Ground Squirrels here too. 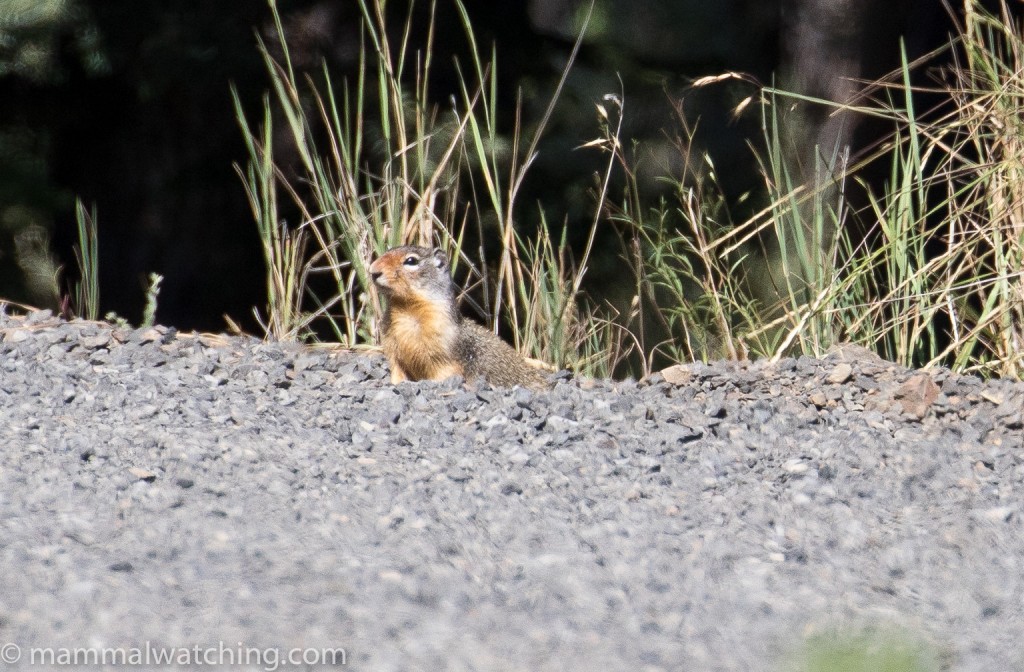 In the evening, back in Boise, we headed out on a gopher safari. I’d looked for Northern Pocket Gophers before with Matt but without success. But now I knew how to see one. 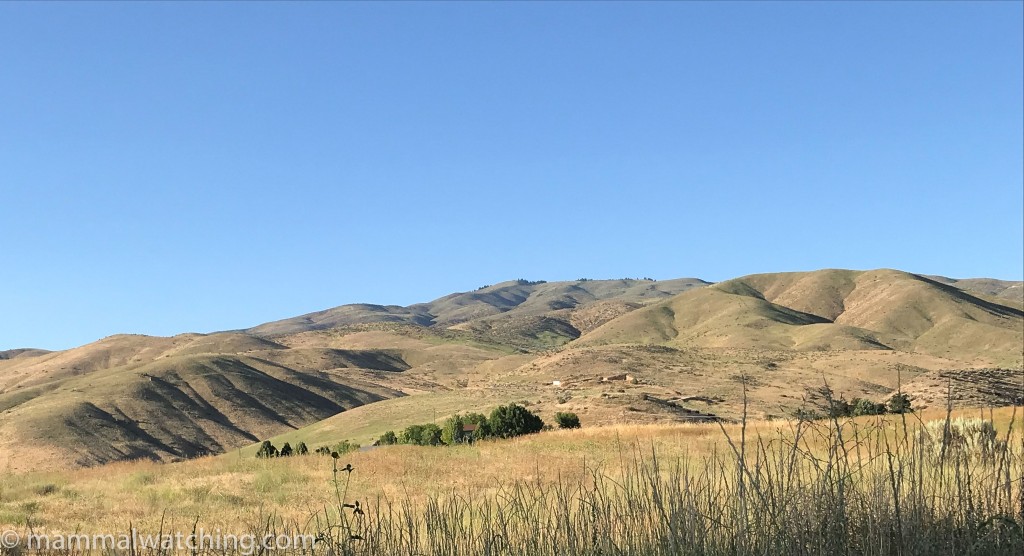 The Miller’s back yard

After dinner Matt, the kids and I took lawn chairs, beer and a couple of sticks out into the land behind Matt’s place. It was alive with gopher diggings. We found a few fresh mounds and gently opened the entrance holes. And we waited. 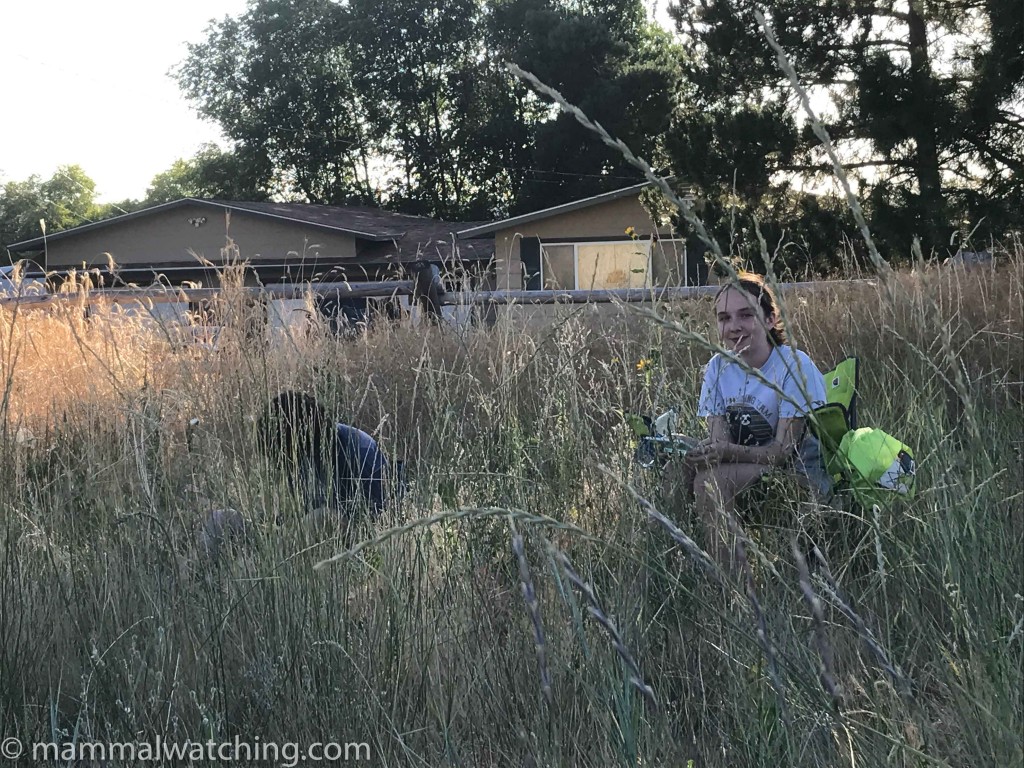 Patrick and Katy: gaming with gophers

We had no success with the first set of holes and so after 45 minutes we searched for something even fresher. Matt found a very new mound and sure enough – after 15 minutes of waiting (including shining a flashlight down the hole) – we scored. 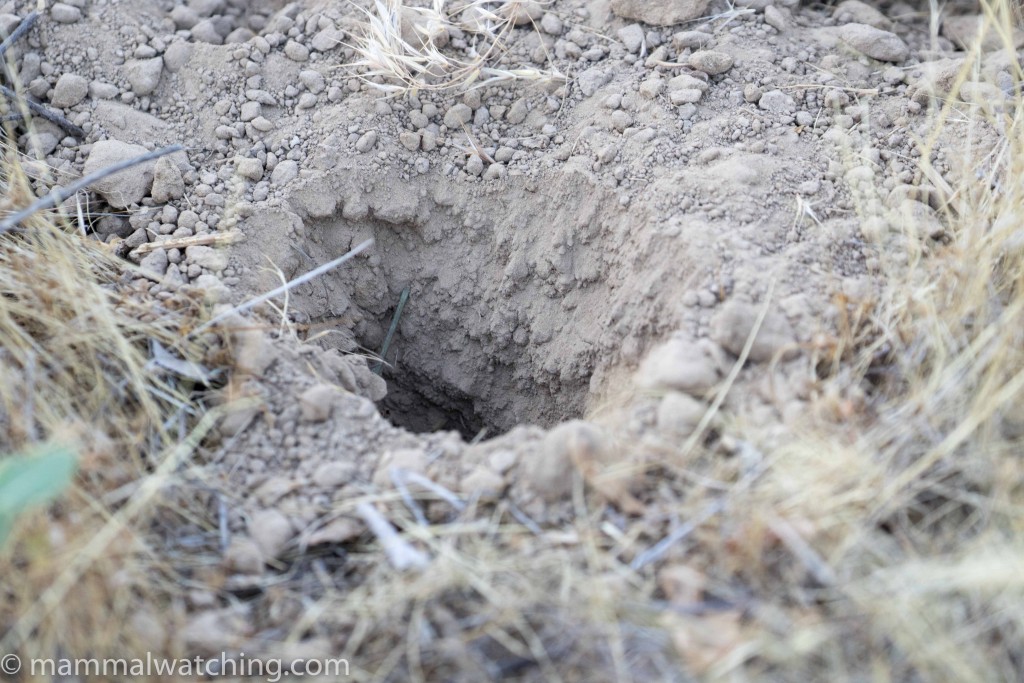 Matt describes the moment perfectly in this piece he wrote about my visit. 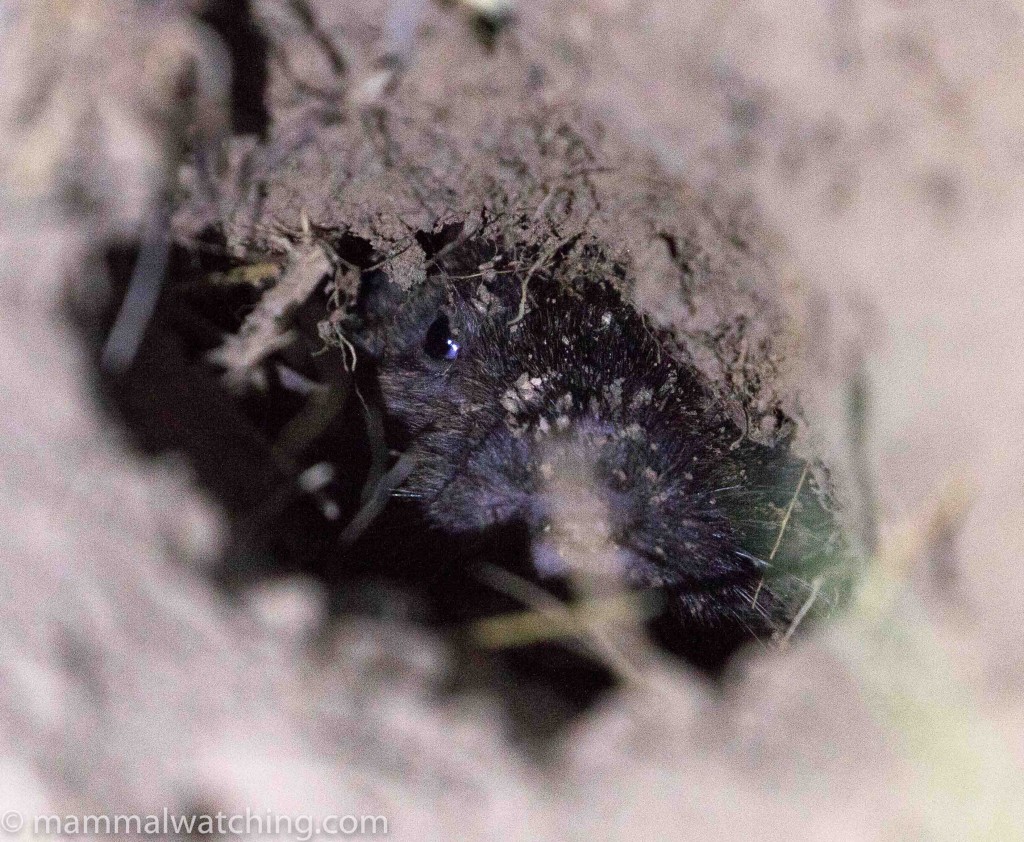 Three new mammals in a day.

After dark Matt and I drove to the Intermountain Bird Observatory in the hills behind Matt’s house. Northern Flying Squirrels live in the conifers up here and occasionally get into mistnets set for owls. We wandered around with heatscopes for a couple of hours but saw nothing other than a mouse and a sleeping bird.

On Sunday we looked for Pygmy Rabbits, in an area of old growth Sage Brush that had been quite reliable for the species over the past few years. I’d seen a Pygmy Rabbit once before but wanted a better look. But we didn’t see any, nor any sign of them.  We did see impressive numbers of Jerusalem Crickets swarming along the road in their thousands. 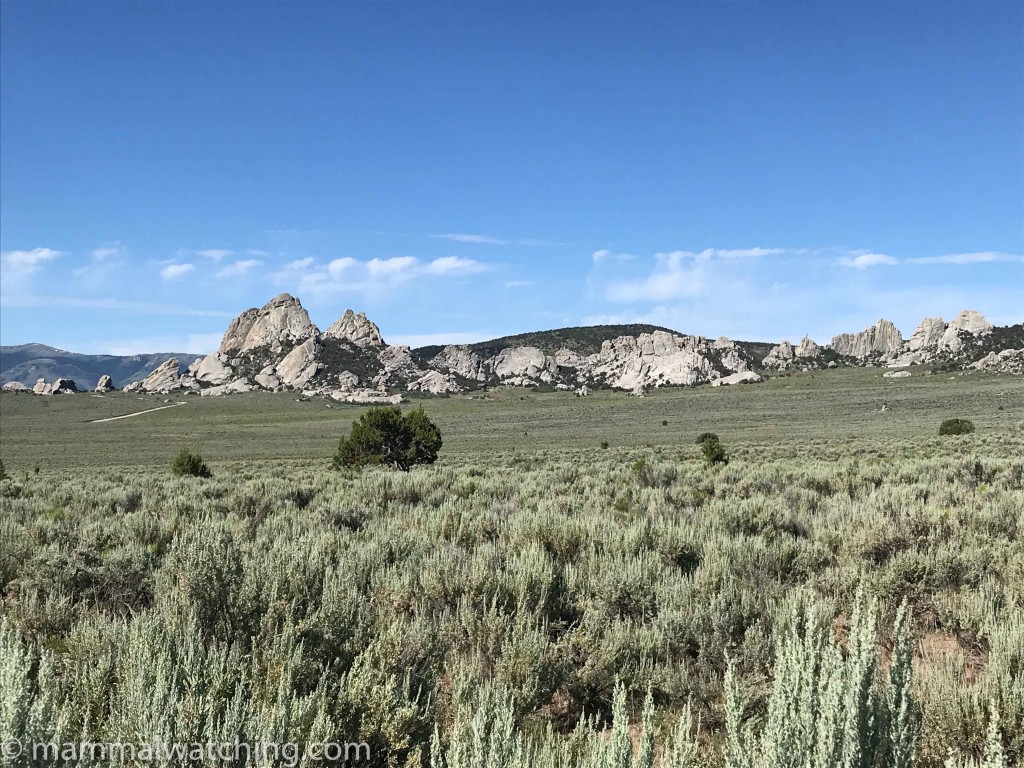 We spent our final night near City of Rocks National Reserve on the Idaho/Utah border. It was a convenient break in the drive to Salt Lake City airport, and also offered a chance for species like Sage Brush Voles, Northern Grasshopper Mice and Western Spotted Skunk (thank you Ranger Jennifer Mccabe for typing up the entire mammal list for the reserve to email it to me).

I spent an hour road cruising at night but saw only a few Great Basin Pocket Mice crossing the road. I caught one in a trap just outside the reserve the next morning, 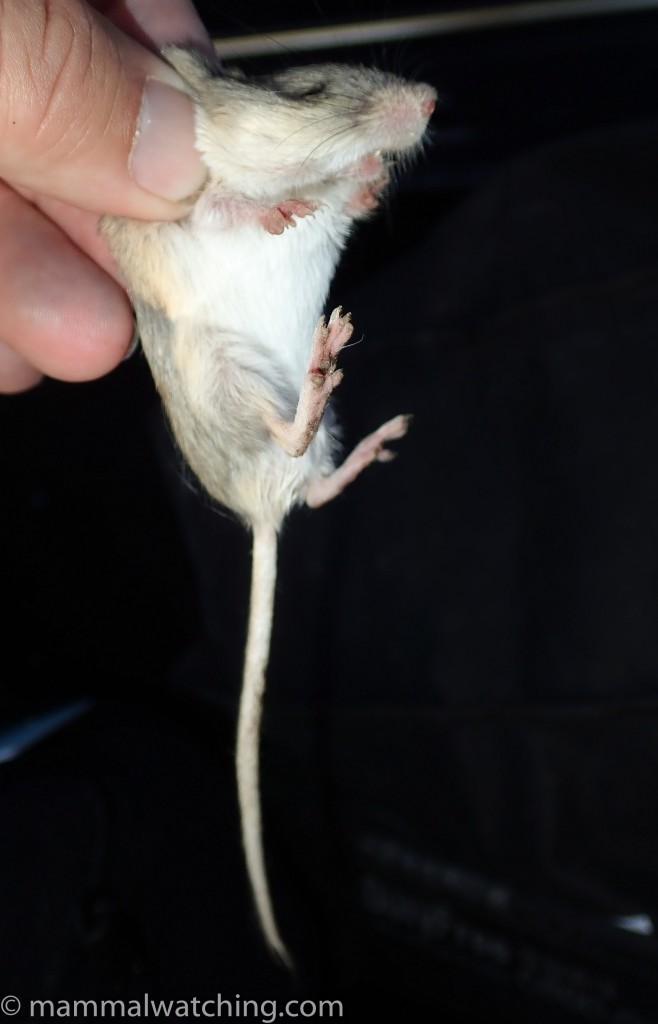 And then it was down to Salt Lake City and a flight back to New York.

Thanks again to Matt and Jennifer Miller in Boise, and to all the Foleys in Minneapolis, for looking after us so well.