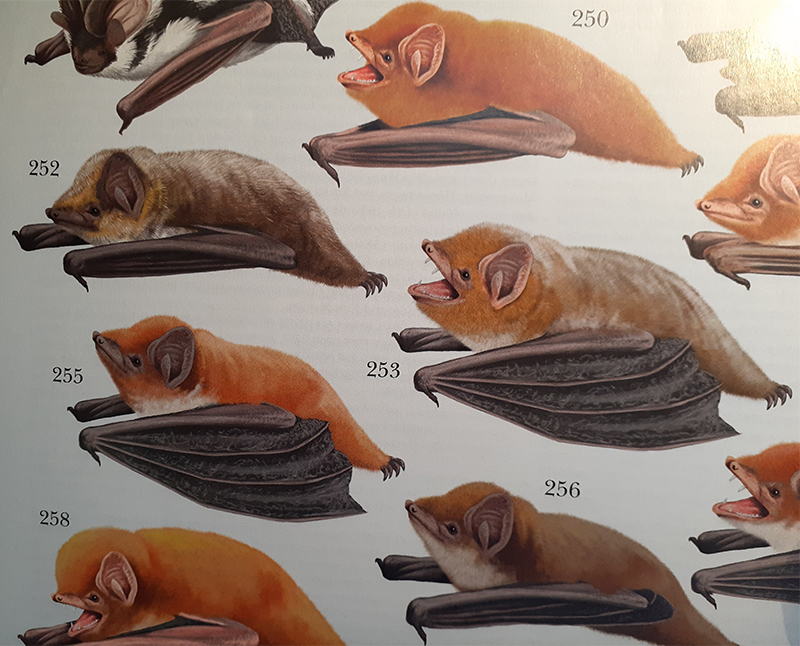 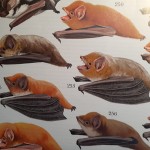 I finally finished going through the last volume of Handbook of Mammals of the World. It is the best one in the series: parts of the text look like they’ve actually been proofread, and only a handful of maps are misplaced or don’t correspond to the text.

The plates are also better. Alas, one of the illustrators obviously wasn’t up to the job: his images are all copypasted and often don’t look even remotely similar to the animals they are supposed to portray, including some common and well-known species with hundreds of photos easily available online, such as North American Lasiurus. Just look at the photo of one of the plates: #252 is supposed to be the hoary bat.

Other serious issues are: (1) there is no introduction explaining various technical terms used in describing bat morphology and echolocation calls; (2) many bats were apparently painted with all details of their facial structure accurately shown, but printed so small that those details are not visible, rendering many plates useless, particularly those showing horseshoe bats; (3) some authors show serious pro-splitting bias, ignoring or refusing to follow recommended lumps but almost always accepting splits; (4) many recent publications were missed, particularly on taxa occurring in East Asia (could be the same for Africa and Latin America, I just don’t know).

Taxonomic changes are too numerous to list, but for those interested I have an updated global checklist; it mostly follows HBW, but incorporates more recent papers and a few that the authors of the volume apparently missed. Just let me know and I’ll send you a PDF.