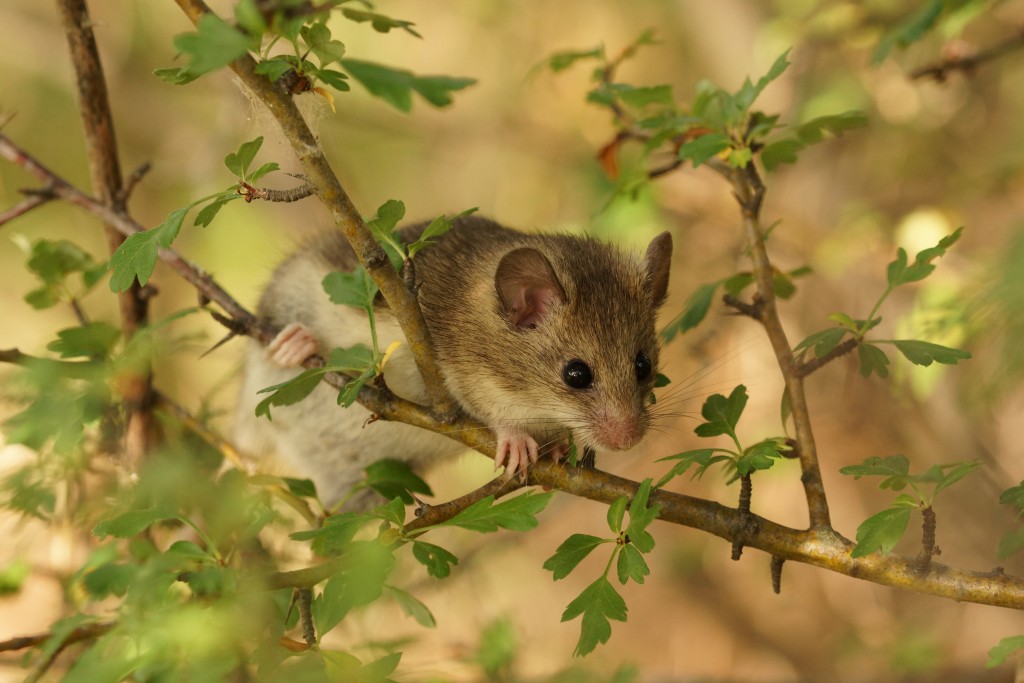 I wanted to spend a week with my son, Patrick, before he went to the UK to study zoology. With three quarters of the world still shut for travel, we thought we would visit Bulgaria, a mammalian melting pot where species from the Balkans, Western Europe and Asia minor come together. Bulgaria also has Nedko Nedyalkov: a fabulously helpful mammologist who works at Plovdiv’s Natural History Museum. 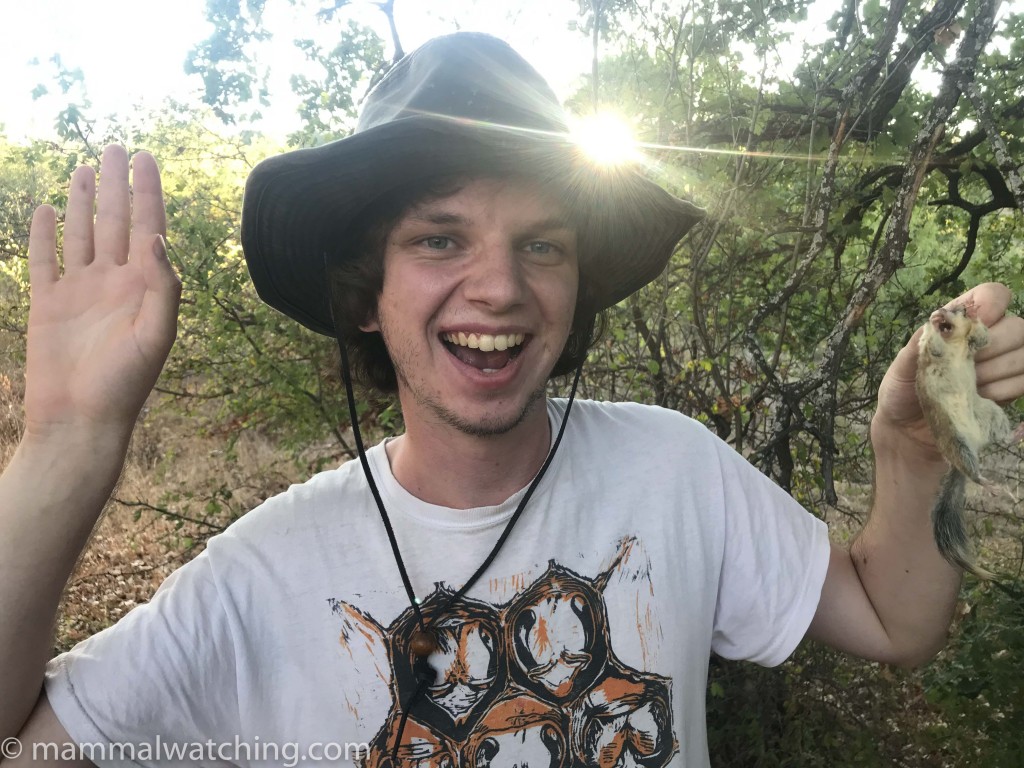 Nedko and I had talked a bit about mammals last year and so I was delighted when he said he would be free in early September to look for some of the species on my ambitious target list. Nedko works with all the Bulgarian small mammals and is researching both Mouse-tailed Dormice and Romanian Hamsters, my two top targets. 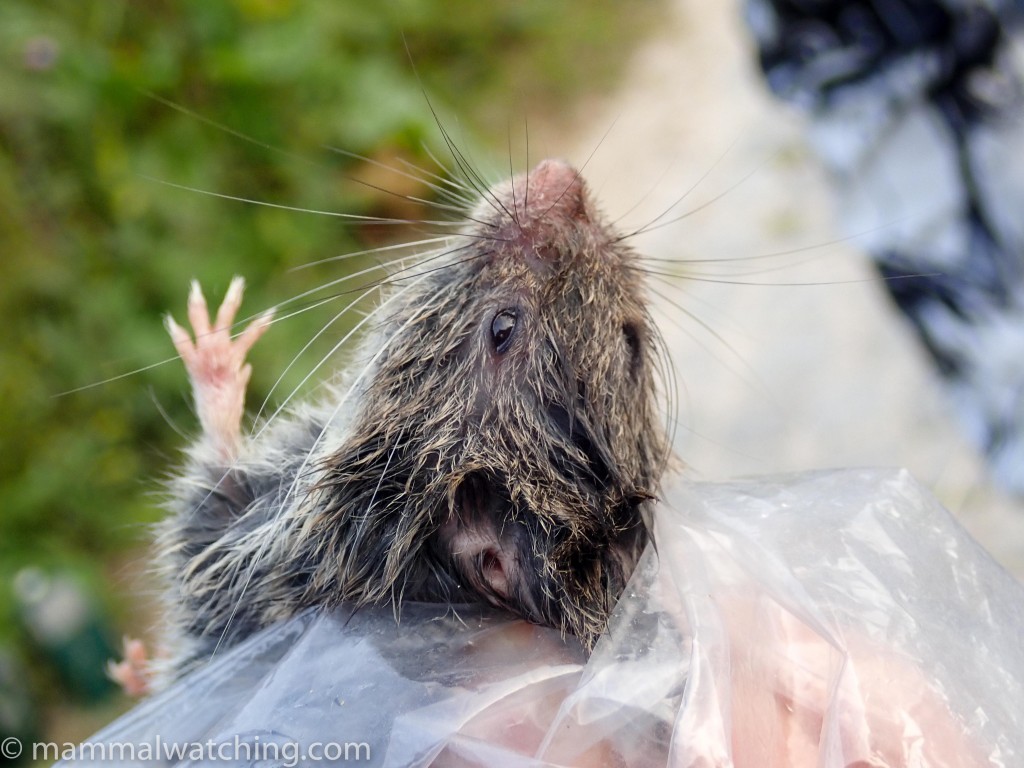 I sent Nedko a list of a dozen or so species I hadn’t seen in Bulgaria and he designed a five night itinerary, going around the whole country, that would give us a shot at seeing most of them. 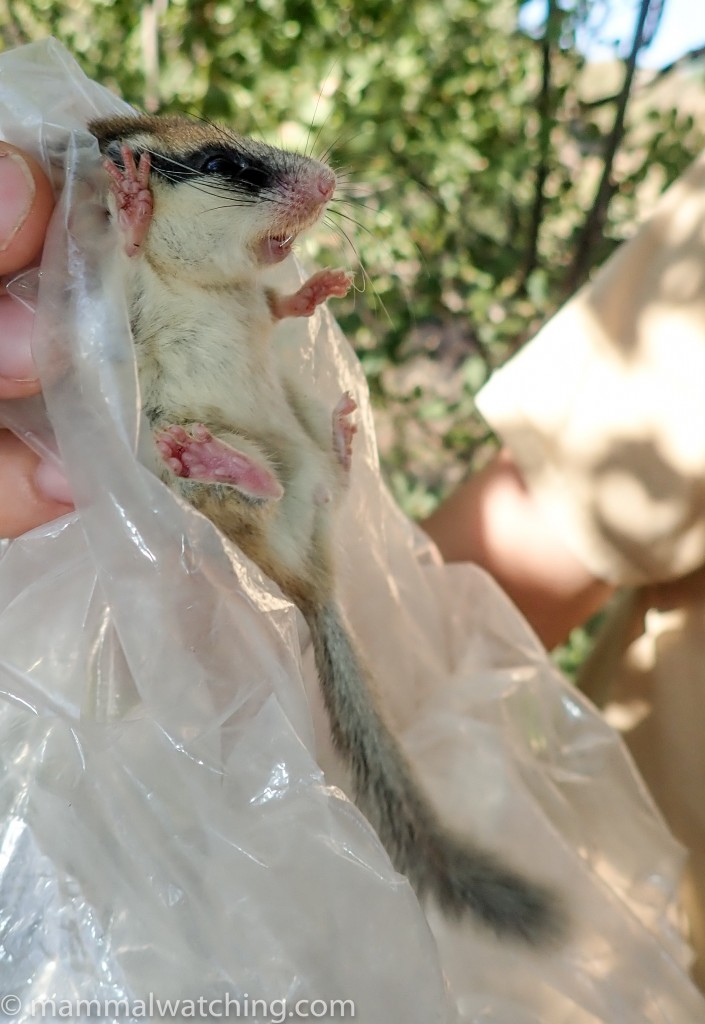 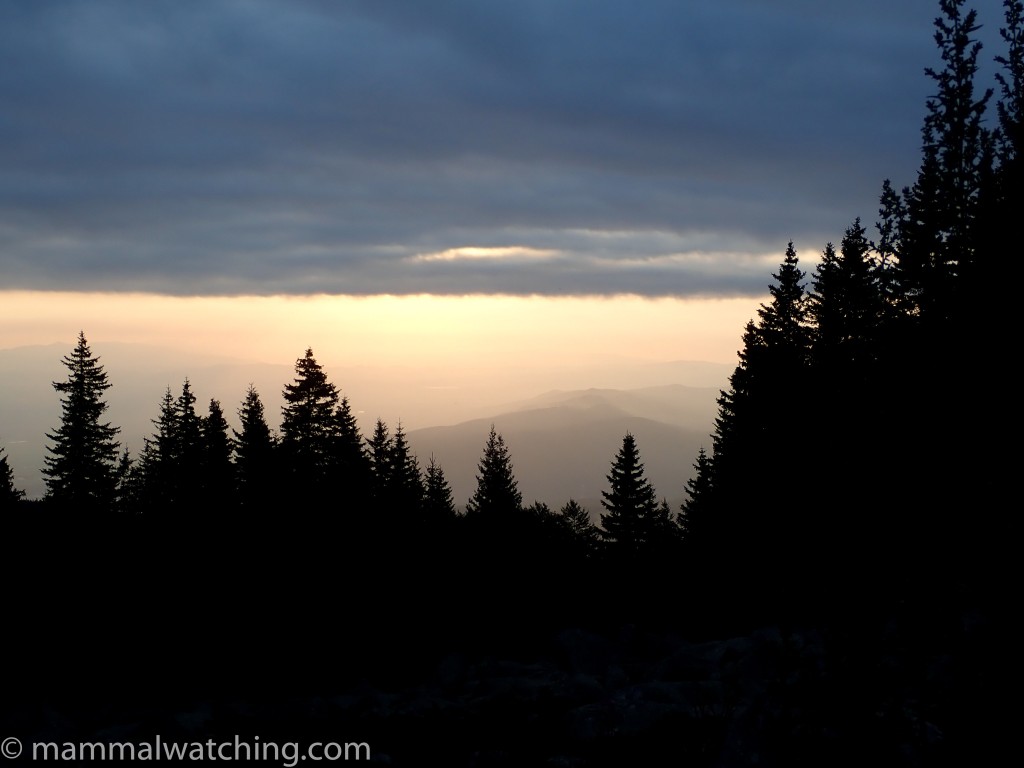 The view from Vitosha Mountain

We landed in Sofia at 6pm and had just enough time to meet Nedko, hire a car, pick up some bait and drive up through the Bistrishko Branishte Biosphere Reserve to Vitosha Mountain south of Sofia. 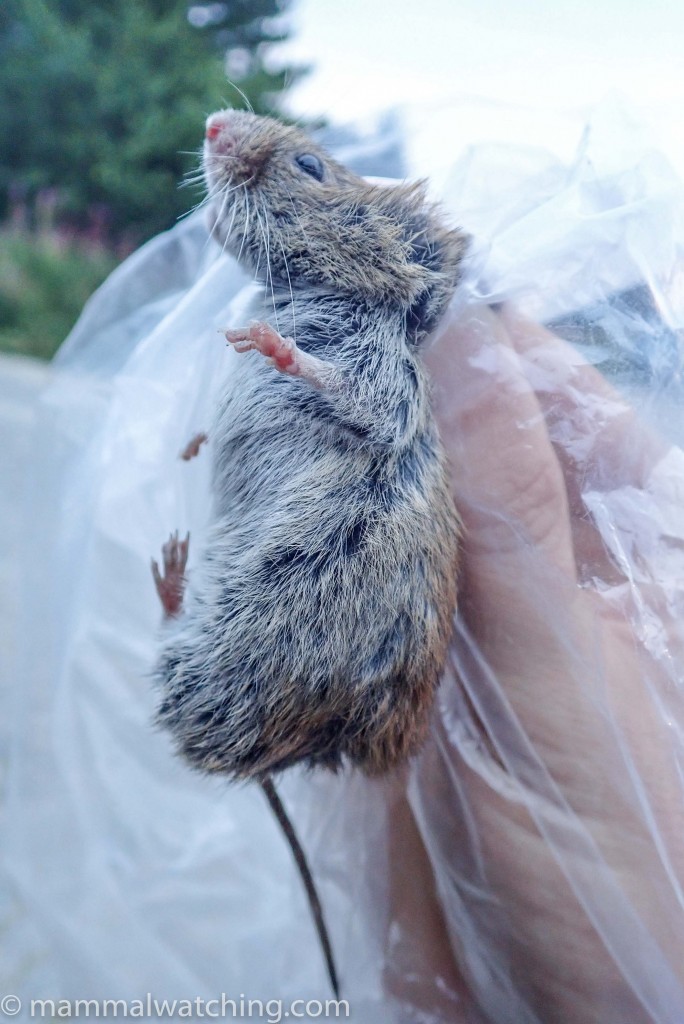 We set a bunch of traps in the boulder fields next to a ski lodge, got a room after dark, and – after learning the kitchen was closed – had a nutritious dinner of beer and Pringles. 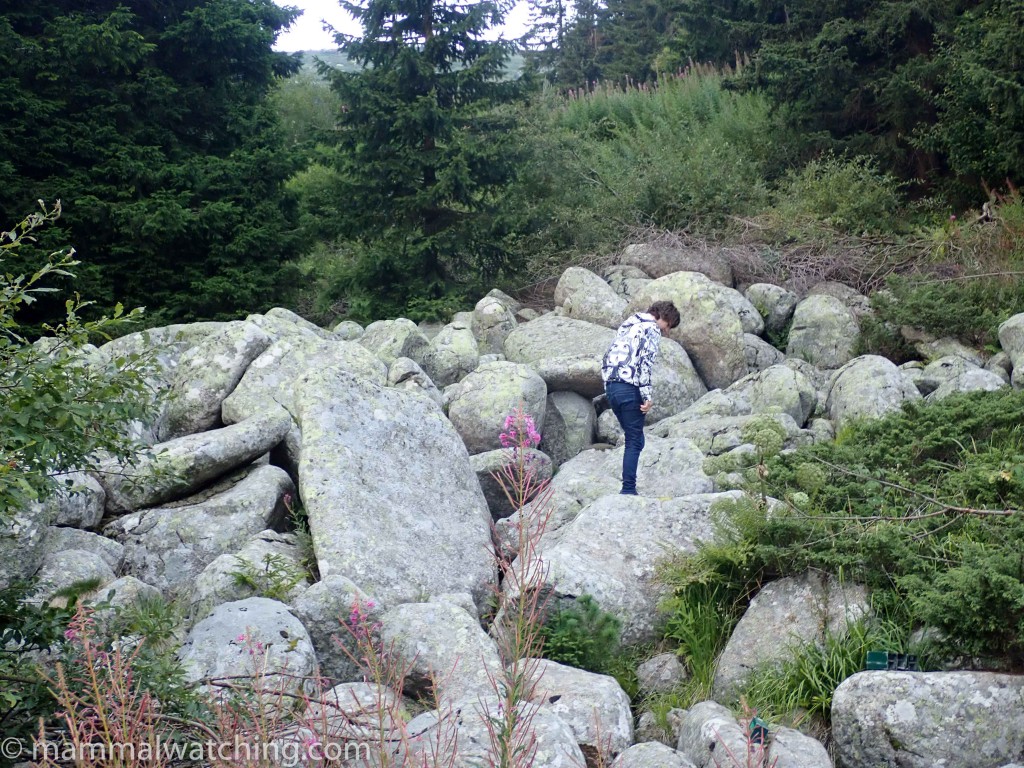 In the morning, as Nedko had hoped, we caught a couple of European Snow Voles among the boulders. Their whiskers are impressive. We also caught several Bank Voles. 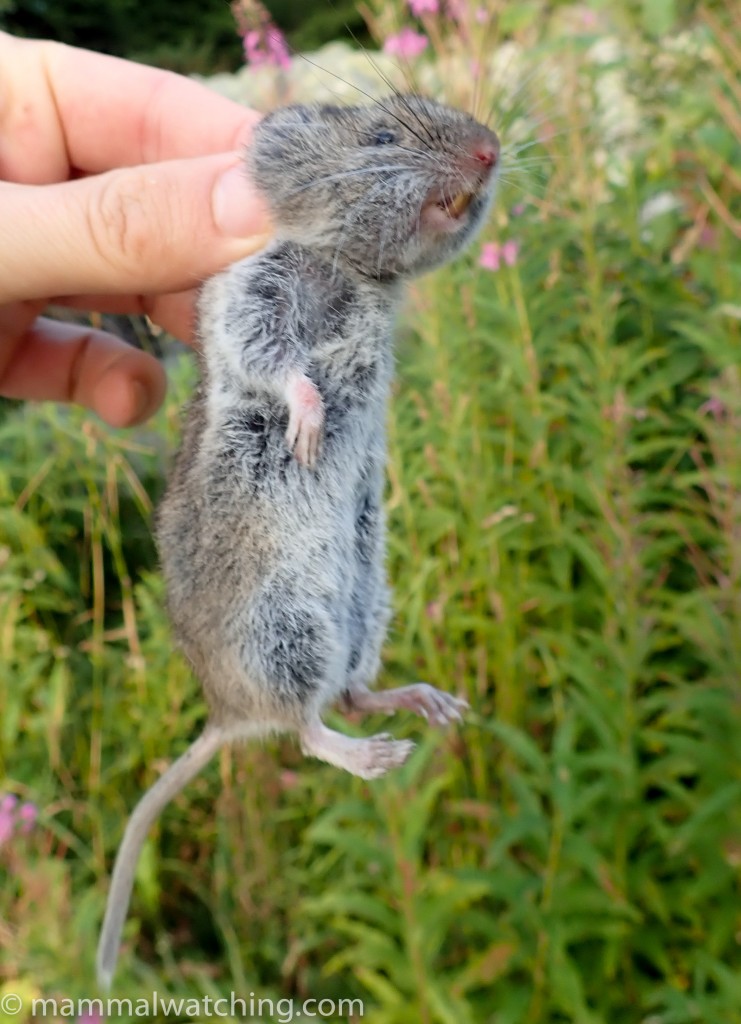 We got lucky with a Miller’s Water Shrew (Neomys milleri – now split from N. anomalus which is widespread in western Europe). A neat shrew that was caught in traps along a tiny stream running under the boulders. 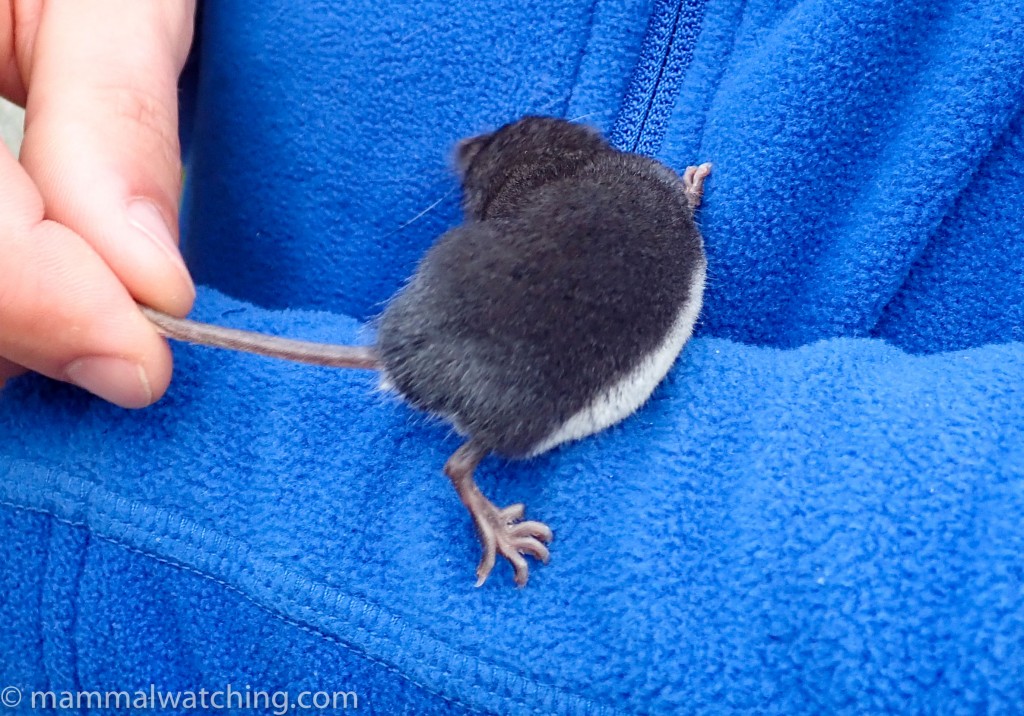 Eurasian Water Shrews (Neomys fodiens) are also in Bulgaria, though their tails have a prominent keel of hair that is absent in Miller’s. 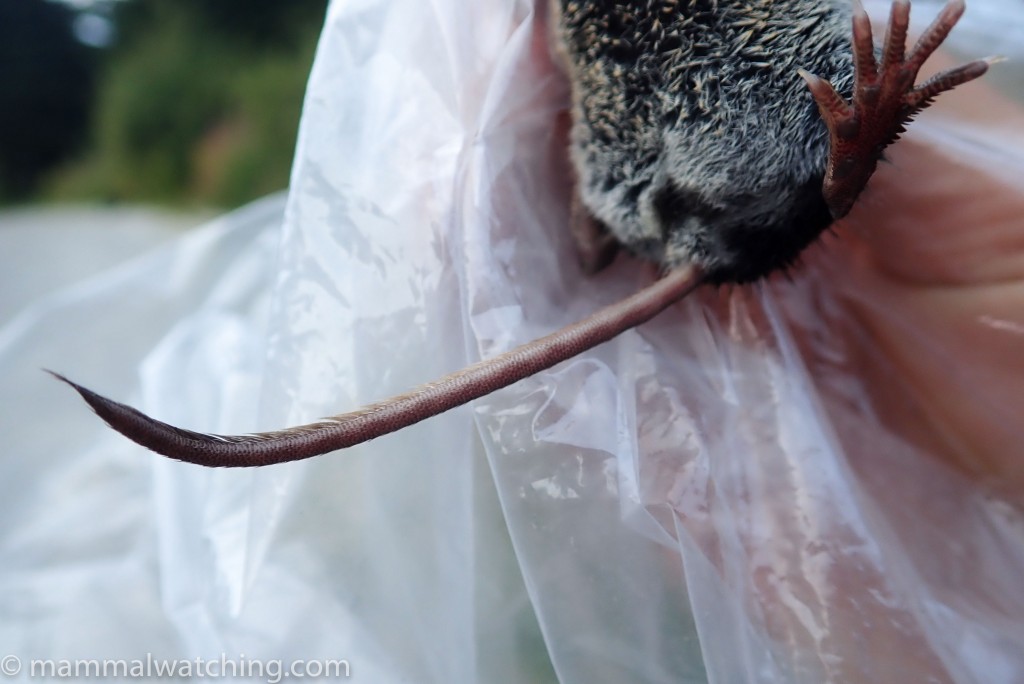 Driving back down the mountain in the early morning we saw a Red Squirrel on the road. 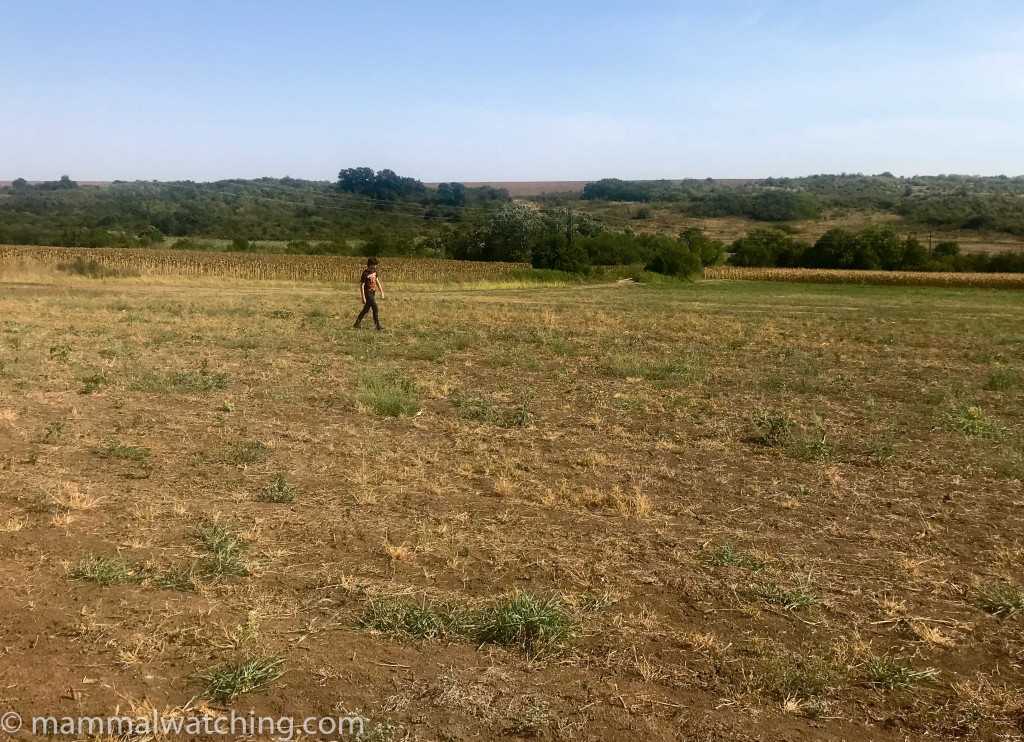 Our next destination was Pleven, two hours north east of Sofia.

The fields around Pleven are one of the better places to find the beautiful Romanian Hamster. Though Nedko warned this would not be easy. The species has become very rare, with the population declining dramatically in recent years, probably because of the move away from traditional agricultural practices.

Romanian Hamsters likes alfalfa fields, which are now much fewer than they used to be. We spent the afternoon checking out sites east of Pleven where the species had been caught recently. We found plenty of fresh hamster burrows, along with very many Common Vole burrows.

We had a nice look at a European Souslik here.

My rental car had a disagreement with a rock on the way to dinner. It pierced the water pump so the car was not driveable. This would have presented a significant problem in many countries, not least because we had traps to collect the next morning, some of which were 3 miles along a dirt track. But Bulgarian taxi drivers are a lot more relaxed than those in New York. The next morning the driver didn’t bat an eyelid at the road, nor carrying 80 ant-infested traps back to Pleven. 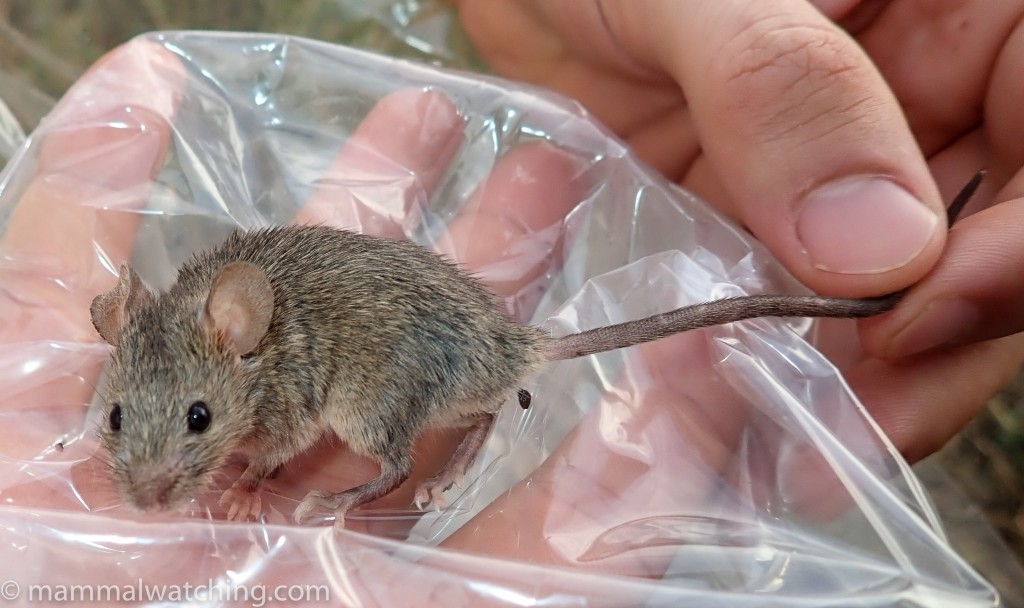 We caught several Mound-building Mice (Mus spicilegus) along the edges of the alfalfa field, and a pretty Striped Field Mouse. But no hamsters: very disappointing given the numbers of traps we had set outside burrows that were almost certainly occupied. 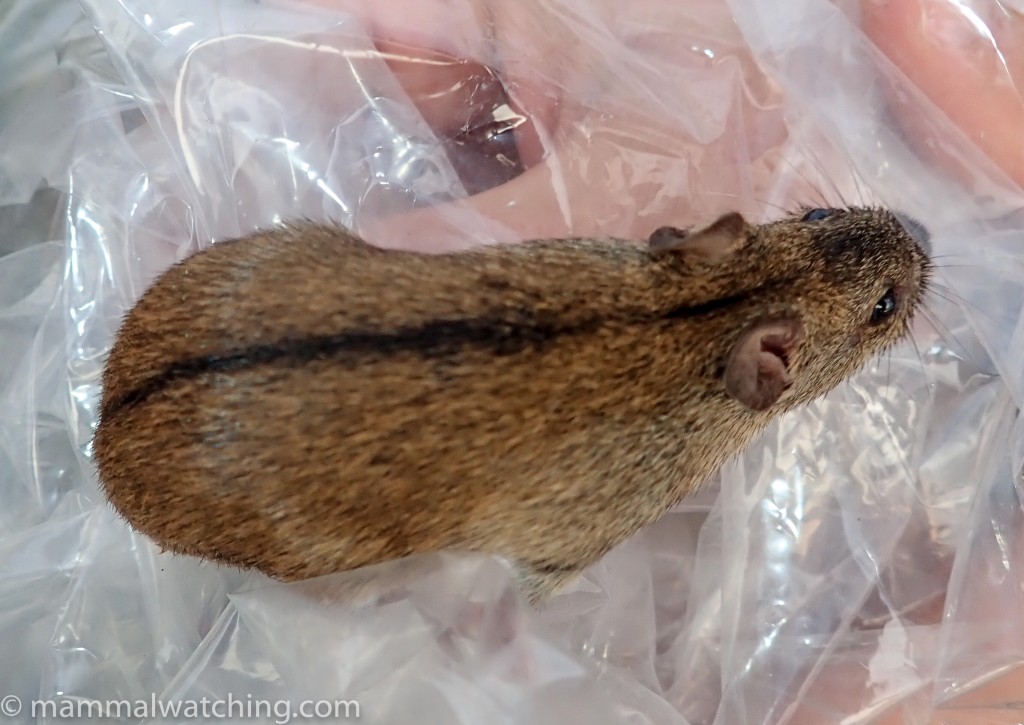 Though Avis were able to deliver a replacement car very quickly, it was still mid afternoon by the time it arrived from Sofia, so we gave up on our plans to travel further east to a second hamster site. Instead we returned to one the most promising alfala fields after dark with a thermal scope.

It was raining so we only spent an hour wandering around and there were a few things running about. I was almost sure one was a hamster until I got a decent look at it, when it turned into a Wood Mouse. Golden Jackals were calling and we had a distant canid in the spotlight that was most probably a jackal but might have been a Red Fox. 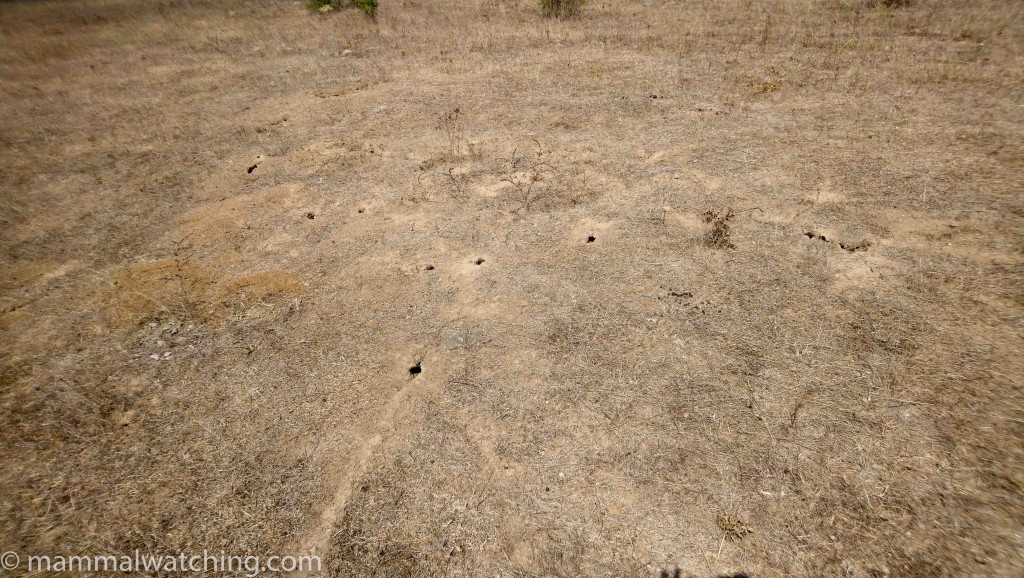 We drove east to the Black Sea and spent the night in the busy tourist resort of Tsarevo. Our two targets here were a very newly described Martino’s Mole (Talpa martinorum) and Harting’s Vole. Nedko described the new mole species in 2018 and it made the news as Europe’s newest mammal. This species is not a (boring) genetic split: it is considerably smaller than the regular European Mole so markedly different.

While the moles are easy to find in the winter months, they are hard work to track down in summer, particularly after the drought this year. The moles follow earth worms, which like damper soil. Trouble was we couldn’t find any damp spoil. We spent most of the time searching for diggings along a river near here but couldn’t find any fresh burrows to set traps in.

However there was plenty of evidence of a healthy Harting’s Vole colony here and we set a few traps overnight. This species should be easy to catch but the next morning the traps were empty. 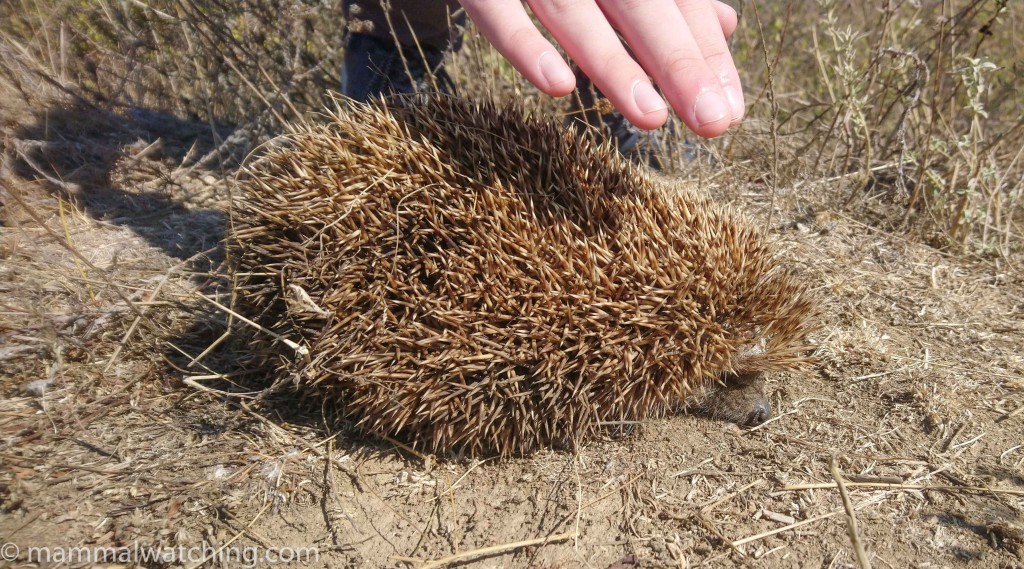 Harting’s Vole are partly diurnal so we spent several hours wandering through large vole colonies on our way to Svilengrad.

Nedko was almost sure he saw a vole here. I thought I spotted another until I realized it was a young Weasel sticking its head out of a vole burrow. Patrick and Nedko found a Northern White-breasted Hedgehog under a bush, while we found a freshly squashed Wildcat on the road.

We stopped at a second site site, saw some European Sousliks and I am almost certain I got a glimpse of a vole retreating back into its burrow here. But not quite certain enough to claim my lifer. 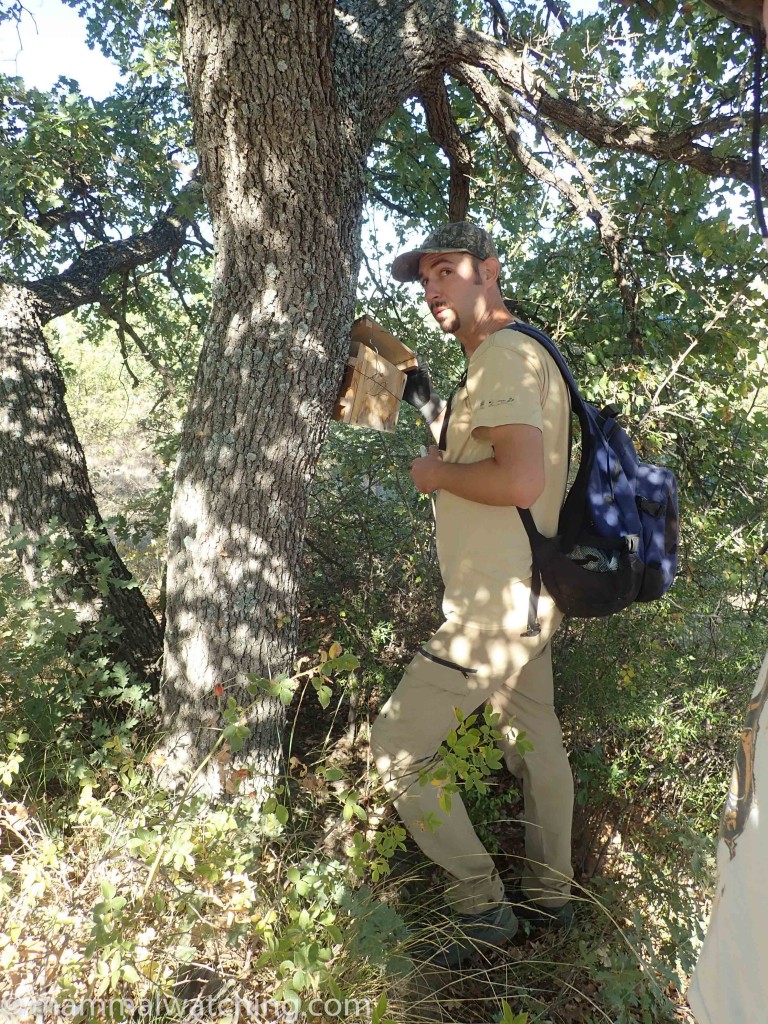 Nedko and a nestbox

Four nights in Bulgaria and I had only seen two new species. I tried to console myself with the thought that I was having a good time with my son. I was … but it would be so much better with a few more mammals. 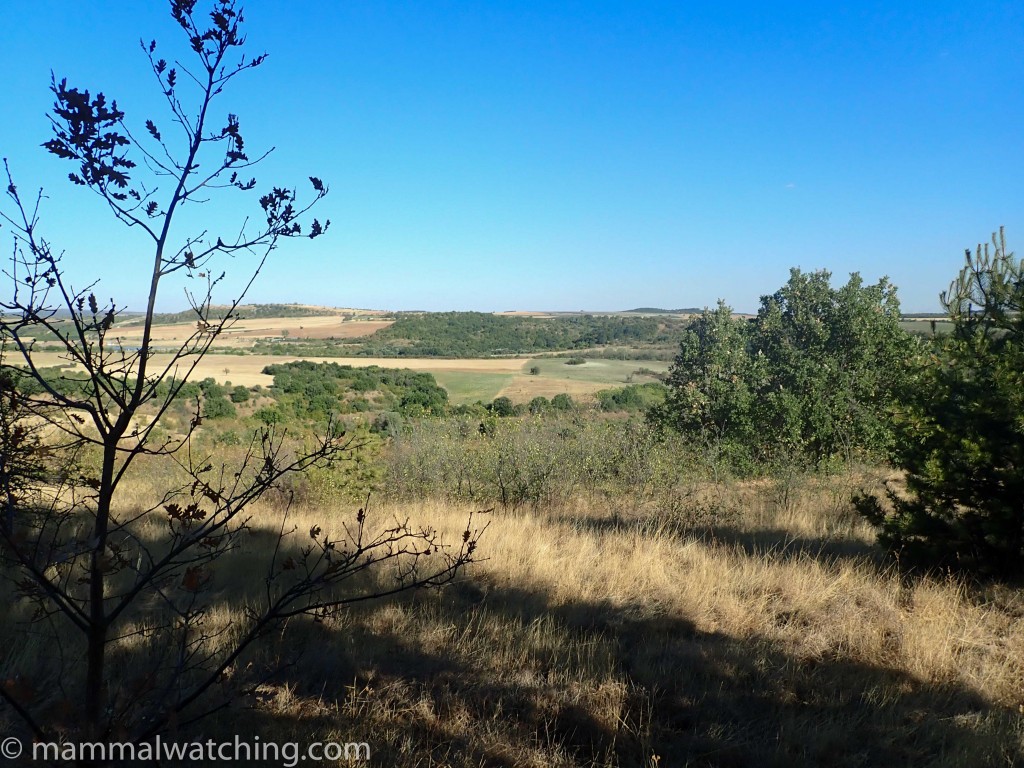 Last year Nedko installed 70 nest boxes for the local dormice close to Svilengrad. There are three species here: Edible, Forest and Roach’s Mouse-tailed. The latter was my number one target for Bulgaria. Beautiful little things and one of the rarest rodents in the Western Palearctic. 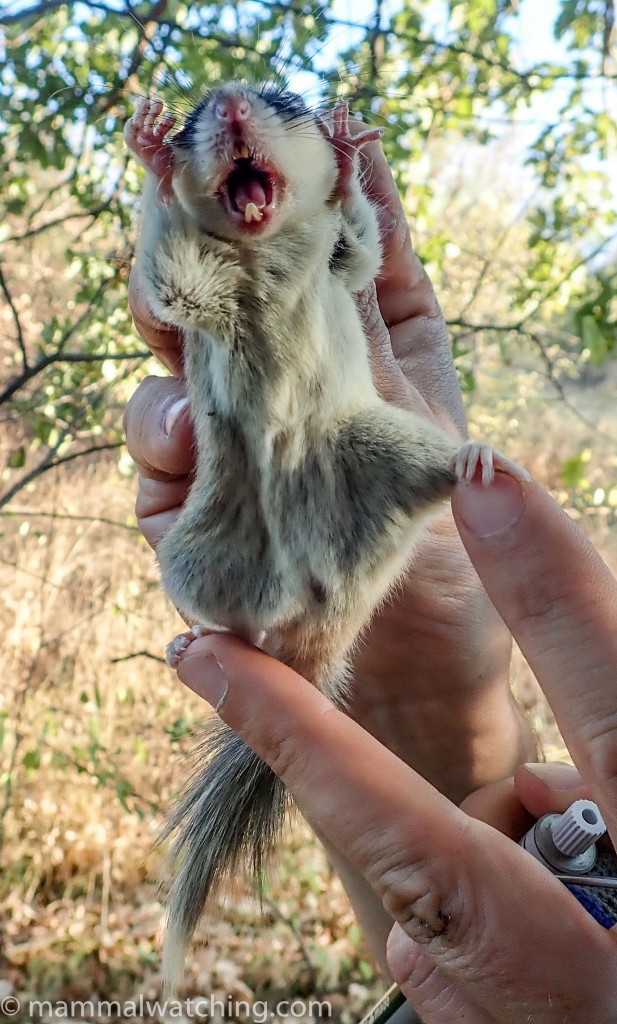 We spent a happy few hours in the afternoon and following morning checking the nest boxes in a patchwork of forest and grassland on hills close to Svilengrad. It’s a lovely area, full of life, and also dormouse central. Nedko checks these boxes twice a month and microchips all the new captures. The project is providing vital information about the biology of both Forest and Mouse-tailed Dormice. Many of the boxes were occupied and we saw an Edible Dormouse, several Yellow-necked and Wood Mice, six Forest Dormice and – finally – a Roach’s Mouse-tailed Dormouse. 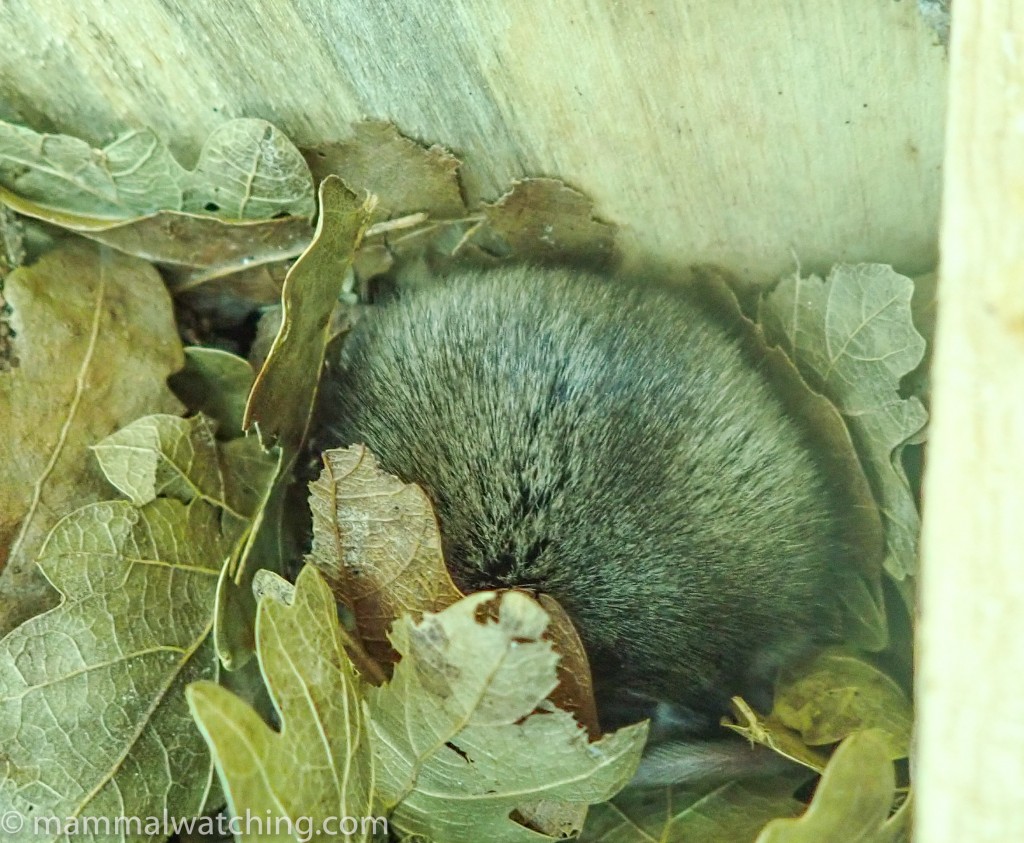 Roach’s Mouse-tailed Dormice are seriously rare. Nedko caught the first Bulgarian specimen in 40 years at this site back in 2017, while there are just a handful of records from Western Turkey. They are also superbly fluffy, and generally a very smart rodent. 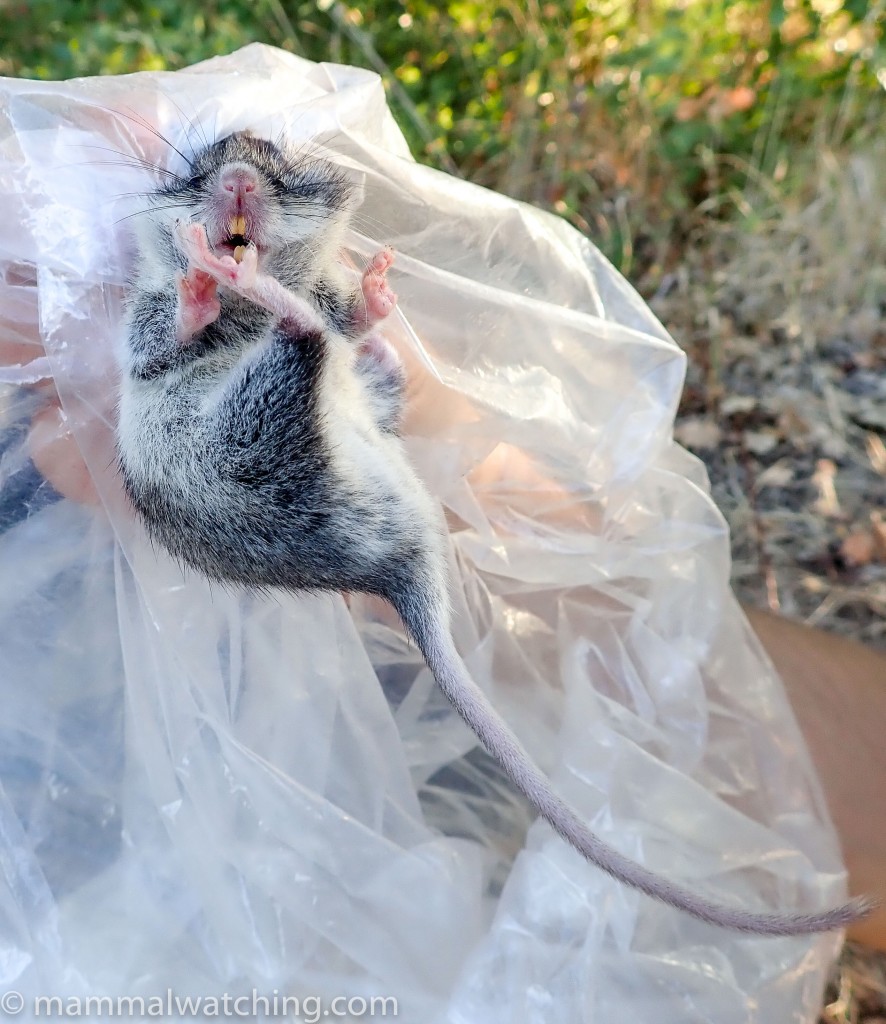 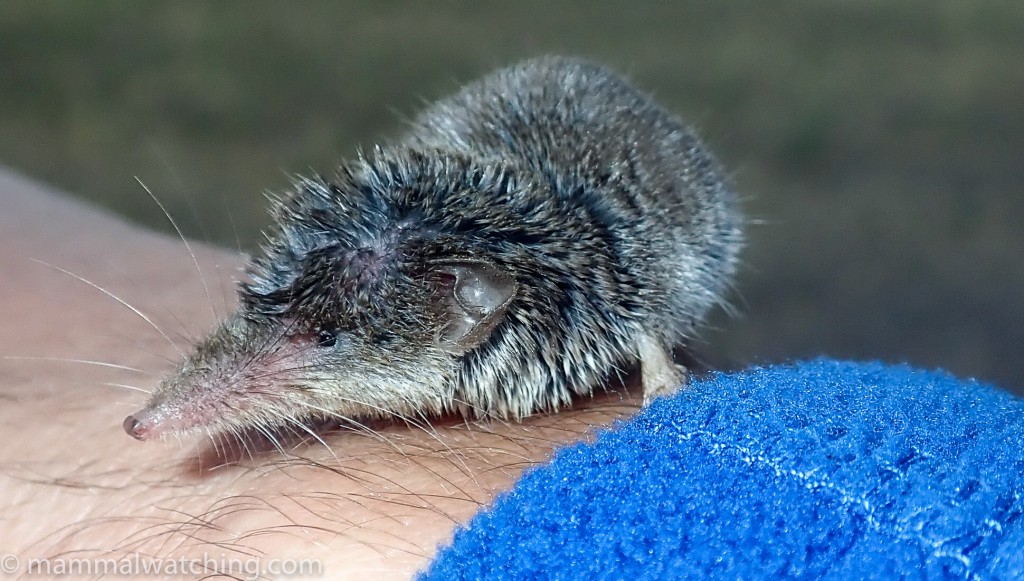 These fields are also home to a healthy population of East European, Southern or Sibling Voles. The taxonomy is in flux for this species: IUCN has them as Microtus levis; the Handbook of the Mammals of the Word goes with M. mystacinus, but according to Nedko the most recent research argues they should be M. rossiaemeridionalis. I will stick with mystacinus for now. We caught several. Another lifer. 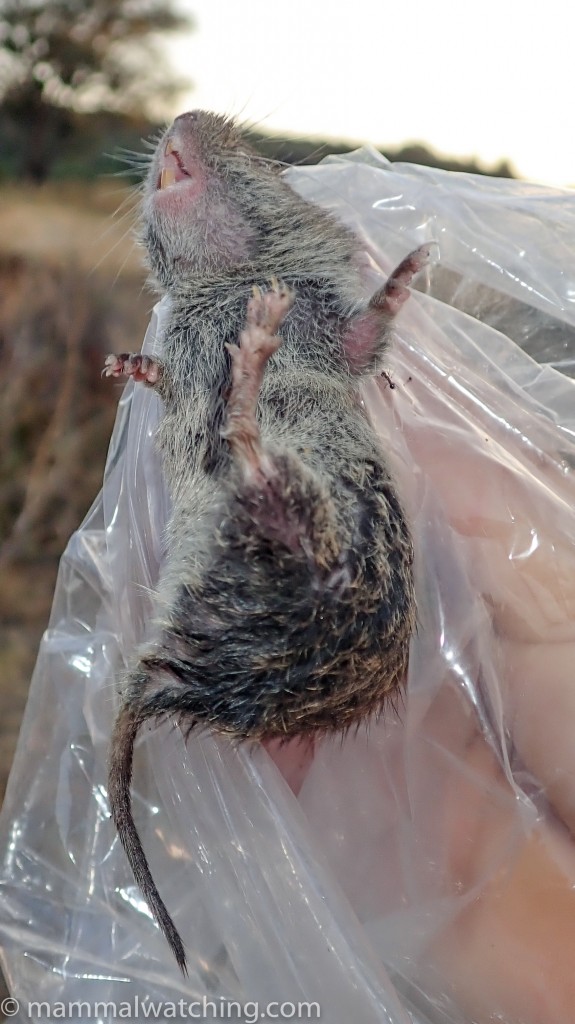 Three new species in 24 hours. All was right again in my universe. 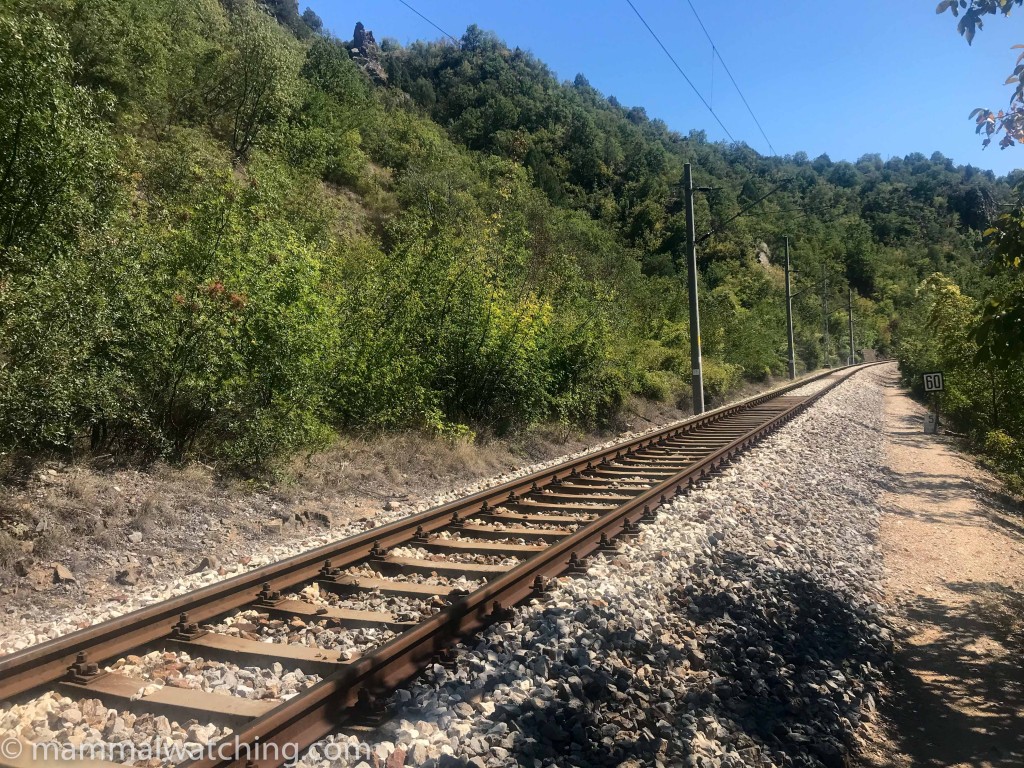 We dropped Patric at the airport to catch his flight to the UK and two weeks quarantine.

Nedko I drove south towards the Greek border for our final night at a site where we ought to catch Western Broad-toothed Field Mouse, Nedko’s favourite mouse.

We set traps below and along a railway line in rocky habitat and the next morning caught several of the lovely mice as well as a few Yellow-necked and Wood Mice. 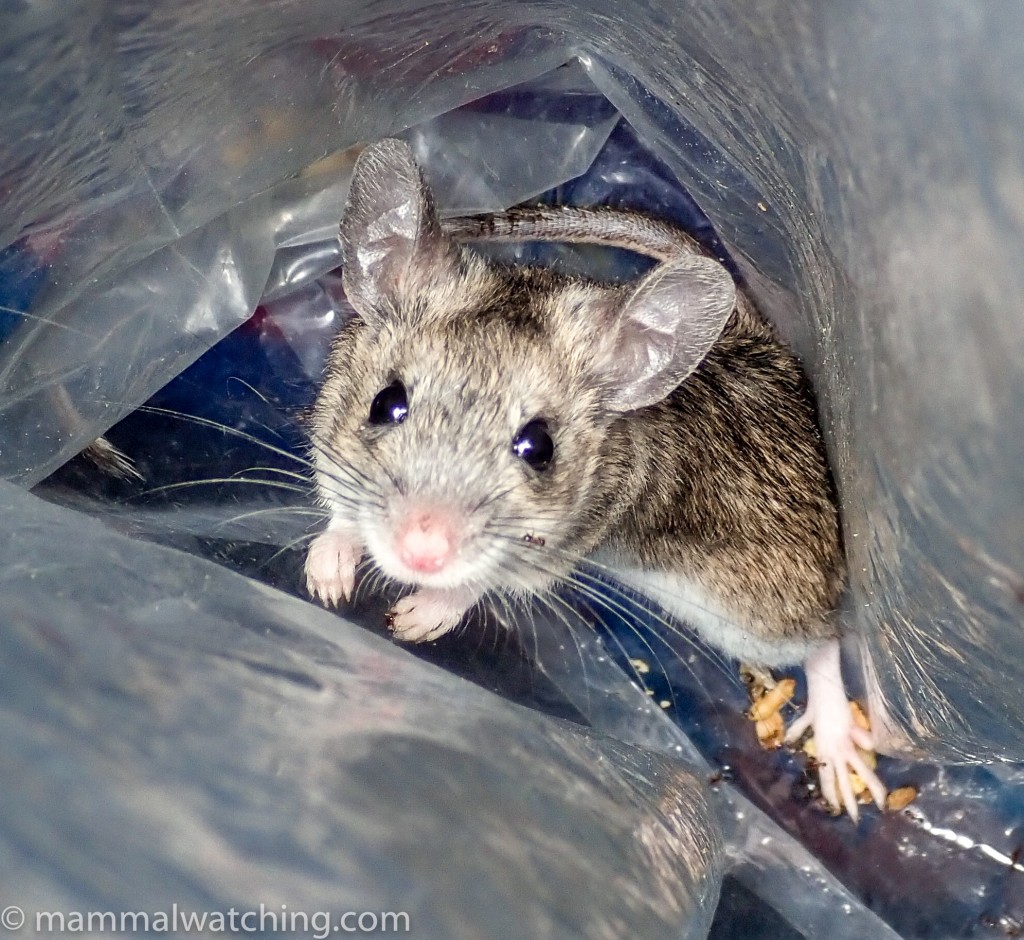 Some traps along a stream near our hotel did not produce the Bicoloured White-toothed and Common Water Shrews we had a small chance of capturing. 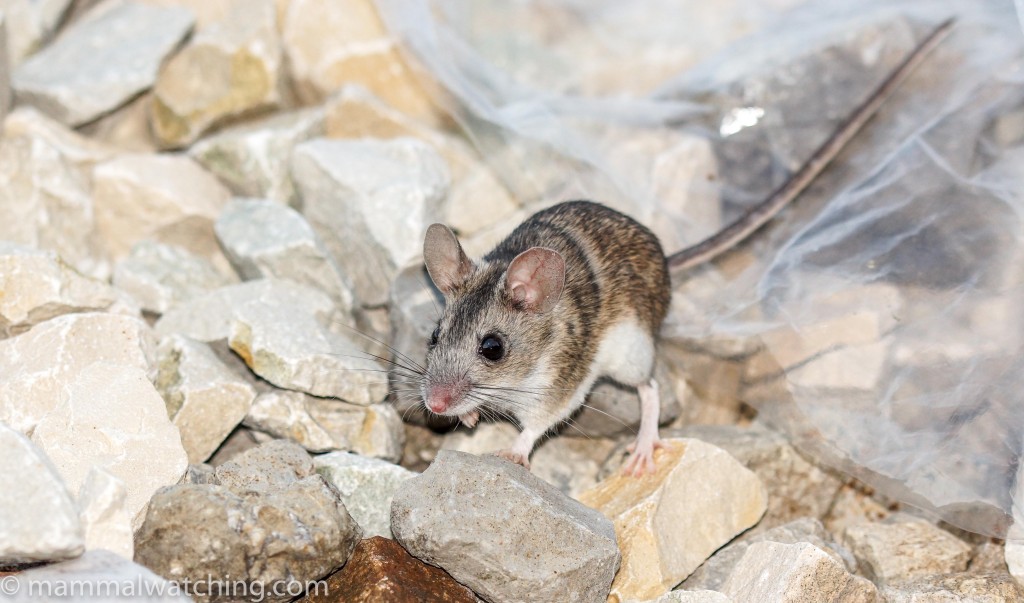 Back in Sofia we celebrated Nedko’s birthday, drinking cognac with his colleagues at the natural history museum. It seems there are many worse jobs than working as a museum researcher. In fact I cannot think of many that could be better. A very friendly group of people who get to spend a lot of time in the field and will happily spend all afternoon drinking. 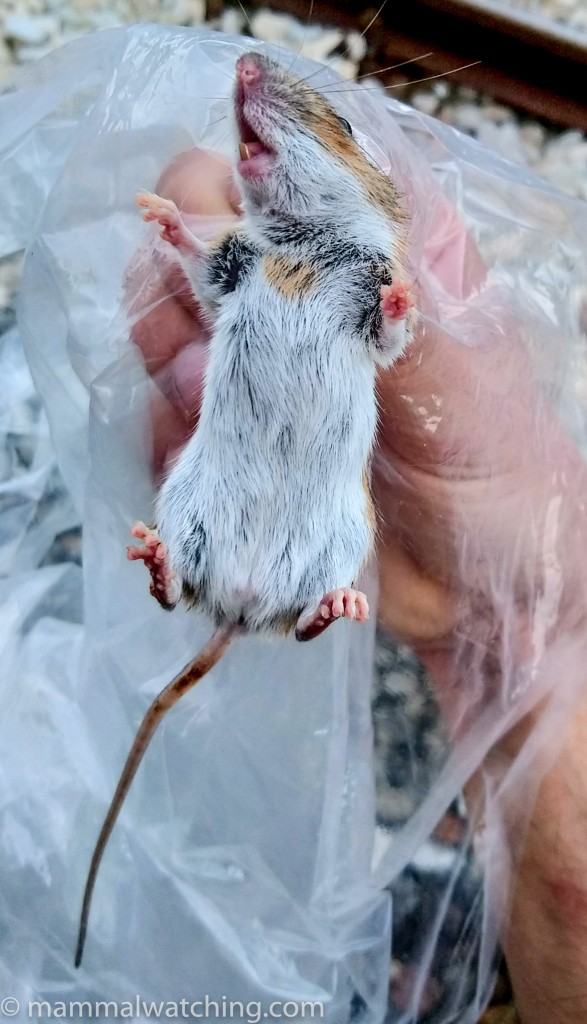 A big thank you to Nedko both for his expertise, good humour and patience. It was a genuine pleasure to spend time – and drink wine – with him. Both Patrick and I learnt a great deal. This was the first tour Nedko had led and I sincerely hope it won’t be the last  (I don’t think we put him off too much). I’m already thinking about returning next spring to catch up with the rest of Bulgaria’s mammals. The report already mentions several mammals we missed. Romanian Hamsters are now rather rare but the other species would be quite findable with a little more time. There are of course many other good mammals in Bulgaria, though we made no attempt top look for them. The most notable is probably Marbled Polecat, which can be seen with a little luck in the right places.