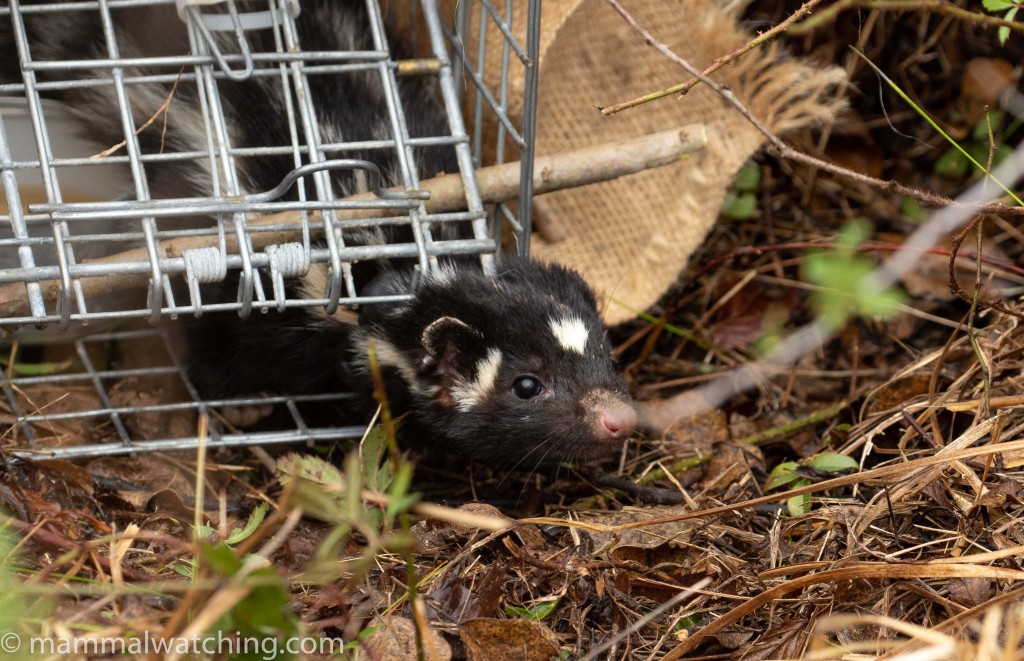 Long long ago, in 2020 BC (Before Covid), I was about to take a trip to Texas to meet up with Eastern Spotted Skunk researchers near Houston. I cancelled the trip at the very last moment just as the pandemic was getting real in New York. I spent the next 9 months wishing I hadn’t. The project kept running, the skunks kept coming but visiting was Covid-complicated.

I finally got down there late last year. I travelled with Jose Gabriel Martinez (of Nicaragua fame). This was partly a humanitarian trip: Jose had been showing frightening signs of developing an interest in birding and an intervention was needed. 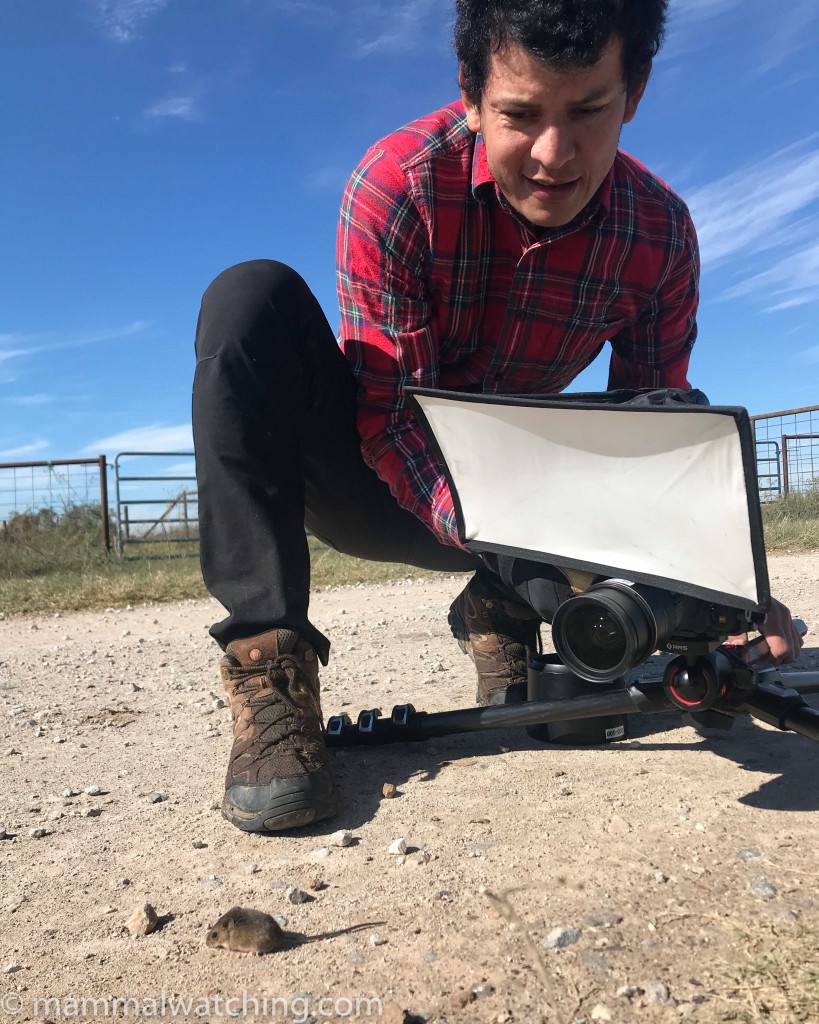 A Jose Gabriel photo shoot with a Fulvous Harvest Mouse

Bob Dowler, skunk expert and all round legend – who had shown me several Texas mammals in 2014 – paved the way for the visit. I just cannot say enough good things about Bob, who is hands down one of the planet’s friendliest, most generous and talented mammalogists. Bob, in turn, introduced me to Clint Perkins, a PhD student at Texas Tech University, running the skunk research. So, after dozens of messages to Clint along the lines “do you think I can visit next week? How about next month? Please can I visit. Please.” we were able to set something up that worked for Clint, Bob and COVID-19. 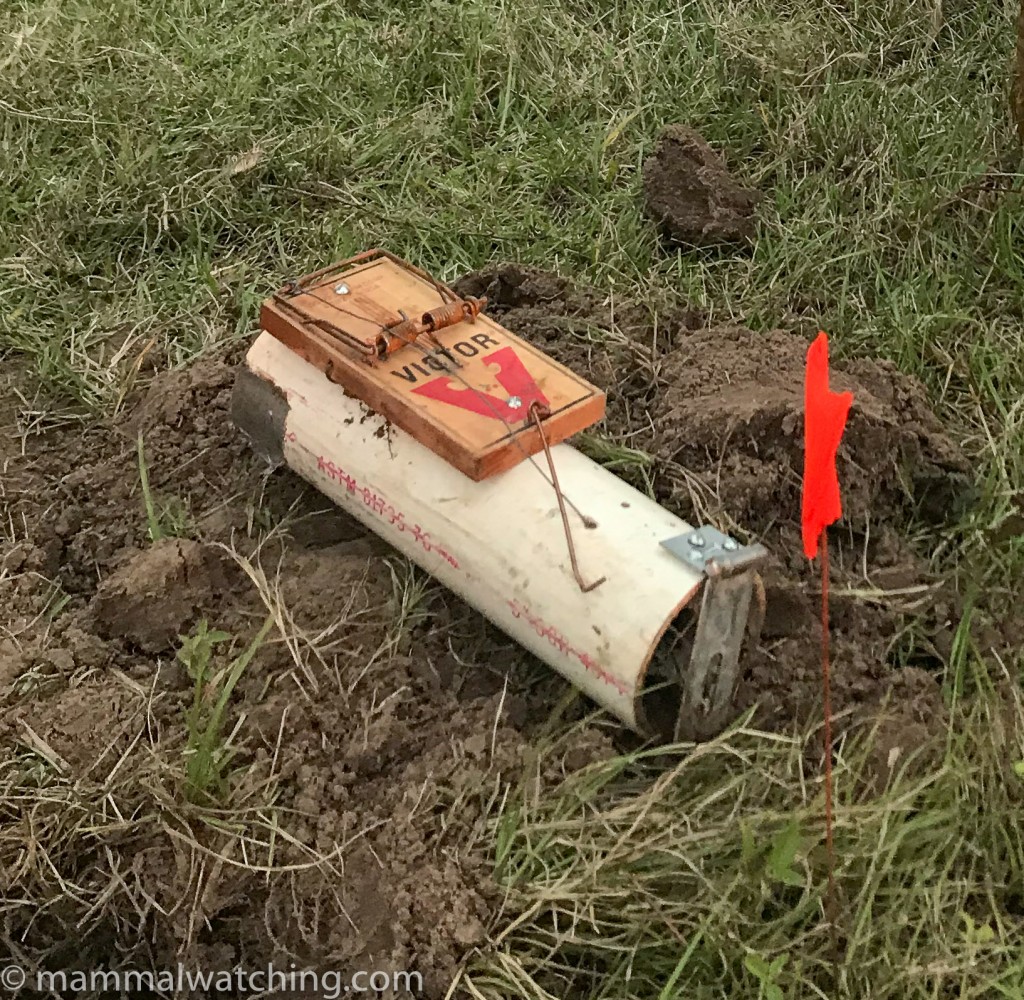 When I looked closely at the mammals of Texas I realized that the state is home to around 30 species I hadn’t seen, a third of them pocket gophers. So I decided to focus on the south east of the state during this short visit, picking a route through the ranges of four pocket gophers. We began with skunks just to the north of Houston and then drove down to Padre Island and up to Dallas stopping for gophers along the way. Clint Perkins and one of his study animals: Eastern Spotted Skunk, Spilogale putorius

The spotted skunk study site is on a ranch near Cypress that is working with the Katy Prairie Conservancy (KPC). The KPC is a non-profit looking to preserve what is left of the tall grass prairie around Houston. They work primarily with local landowners, setting up conservation agreements with those who want to ensure their land will provide a home for wildlife for generations to come. And judging by what we saw they are a success. 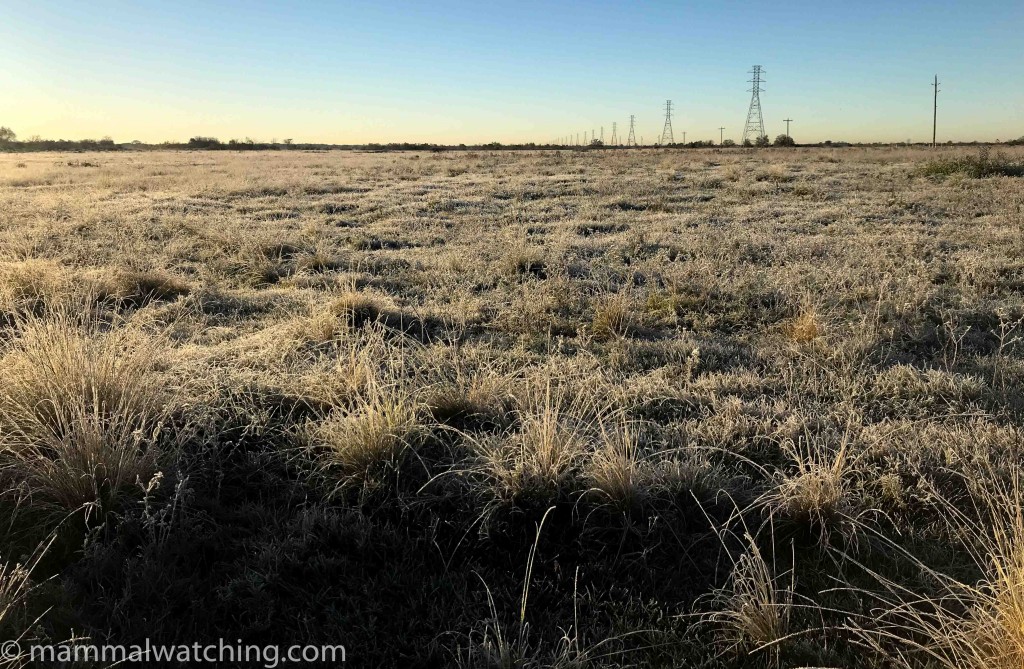 Eastern Spotted Skunks must be one of the most difficult mammals to find in the USA. They are in a rapid decline across most of their range, and have a love for thick – really thick – brush. So even if they are around they are often pretty much impossible to spot. I looked for them several times in Florida without success.

Because of the skunks’ rarity it took Clint many months to find somewhere to study them. He eventually settled on the KPC. The population of skunks, on this ranch at least, was fairly robust, though still not easy to catch, with an average of one skunk per 100 cage trap nights. Nor were the traps easy to set, requiring a uncomfortable amount of wading through dense thorns and mud.

But the difficulty in catching them suited me perfectly. I was in no rush to see one immediately. My mammal lifelist was on 1896 species and with a bit of luck – three species worth – there was a chance an Eastern Spotted Skunk would become mammal 1900. 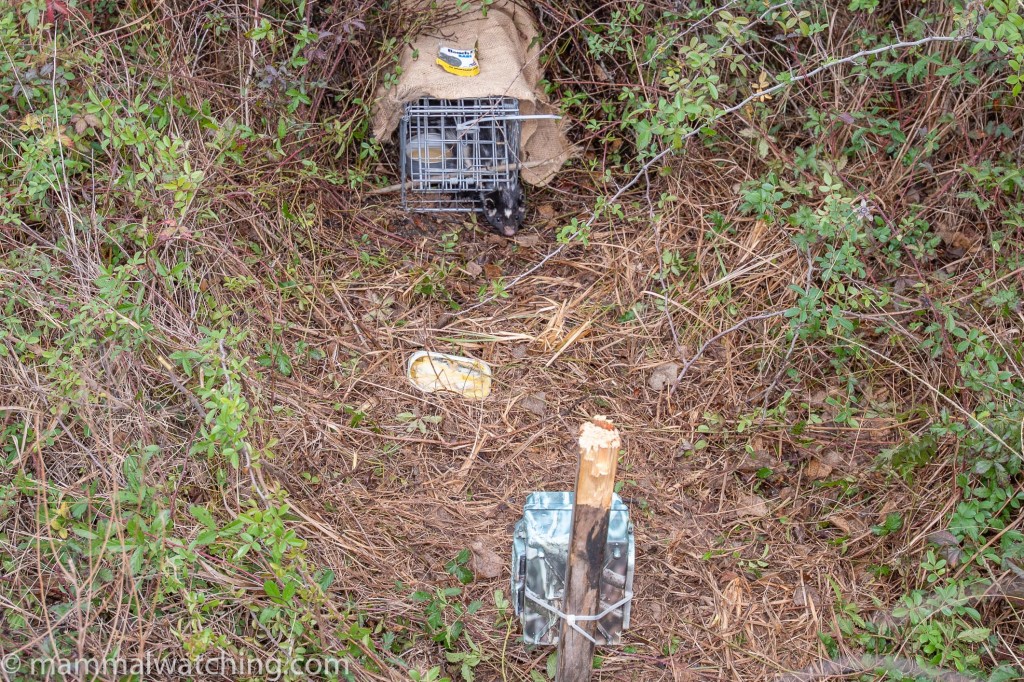 It took all morning to set the traps. In the afternoon we looked for Baird’s Pocket Gopher, which are abundant on the study site and particularly visible after the recent heavy rain. Catching pocket gophers is one of Bob’s specialties and it took him a couple of hours to catch one in a live trap. Mammal 1897. 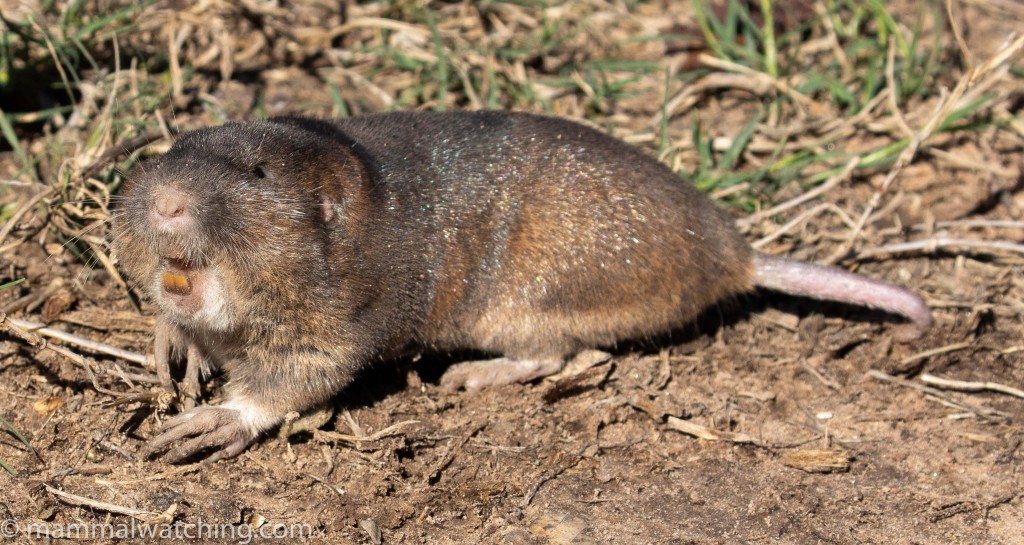 If you think seeing a wild pocket gopher is not up there with a Snow Leopard or a Giant Panda, then think again.  I realise my expectations may have been tempered a little after 9 months of trying to mammalwatch in a pandemic but I am sure that gopher watching is going to be huge in 2021. Why? Because it is a heady mixture of sweat, skill, suspense and serendipity.

First, find a fresh mound, or better mounds, which may require some time.

Second, locate the tunnel (a long pole works well) and dig down to open it to the air. This takes a bit of practice. Bob is an expert. 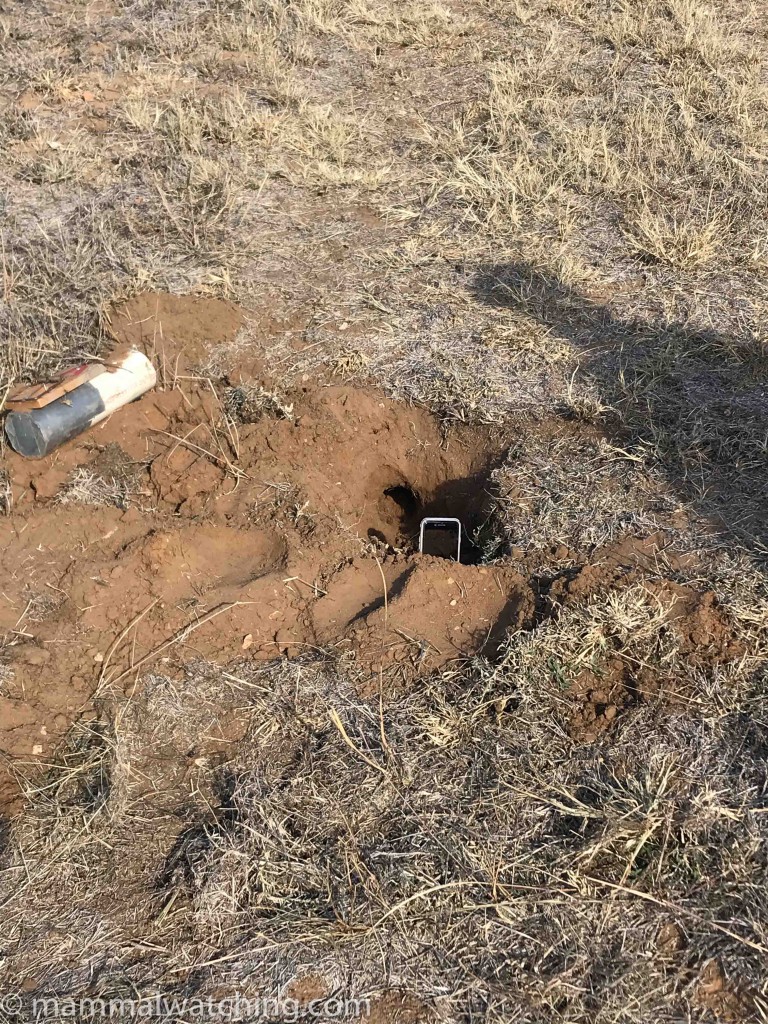 If the gopher is close by it will often arrive within an hour – even within a few minutes – to plug the hole. This waiting – and then watching – is where it gets really fun. Staring into the hole I start to imagine movement. Damn.  Just an ant. But then, no…. surely that was a puff of soil.  A puff more. And then a mini-avalanche announces the gopher’s presence. With every fibre tensed we wait to see whether … it … will … appear. Yes, after almost unbearable suspense, timed to a perfection that Hitchcock would be proud of –  a nose emerges, then the head and we watch it enthusiastically plugs its hole. Cue high fives and general elation.

This 4 minute video from Jose Gabriel gives a sense of the adrenalin charged hunt. It might also help anyone who wants some meditation practice.

I like to think this alone was enough to remind Jose why mammals are so, so much better than birds.

We perfected our technique over the trip. I think the most efficient method is to open a few burrows and go for a beer. Return an hour or so later to see which have been repaired. Open one again and stake it out for 20 minutes. Then go for another beer. 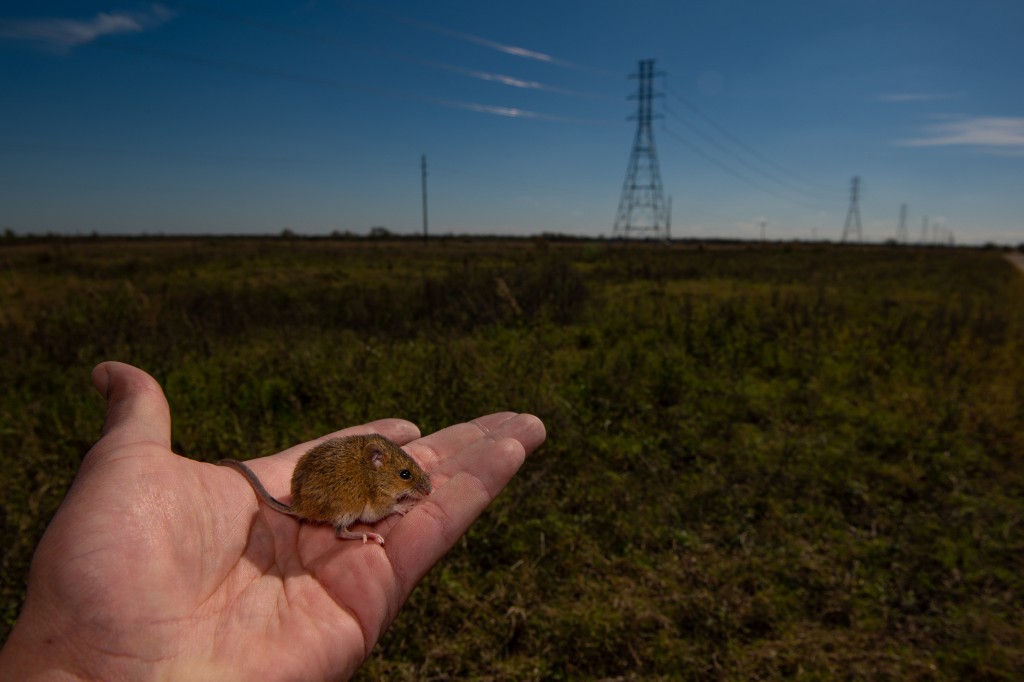 We set Sherman traps on the ranch and the next morning had several tiny and lovely Fulvous Harvest Mice (mammal 1898) in long grass near a creek as well as Hispid Cotton Rats, which are very common and were also in many of the skunk traps. 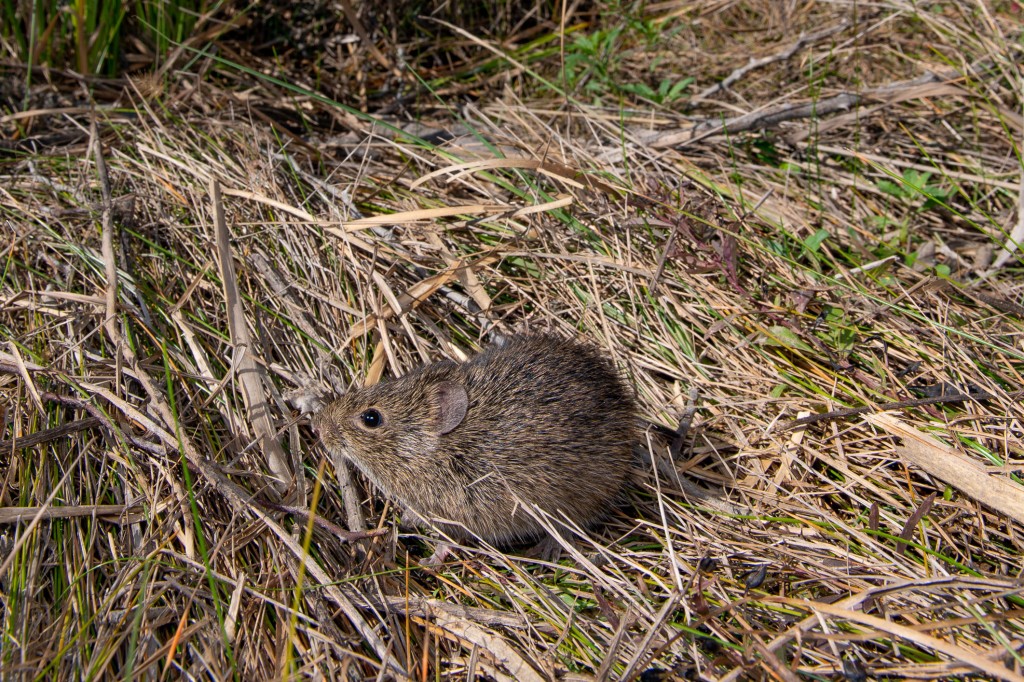 No skunks. No worries. I still had my 1899th mammal to find.

Bob accompanied Jose and me to the other side of the Brazos River to look for Attwater’s Pocket Gopher around the edges of Aransas National Wildlife Refuge. It took us several hours to find a fresh burrow on a roadside here but, after dark and just as we were about to leave, we caught one. 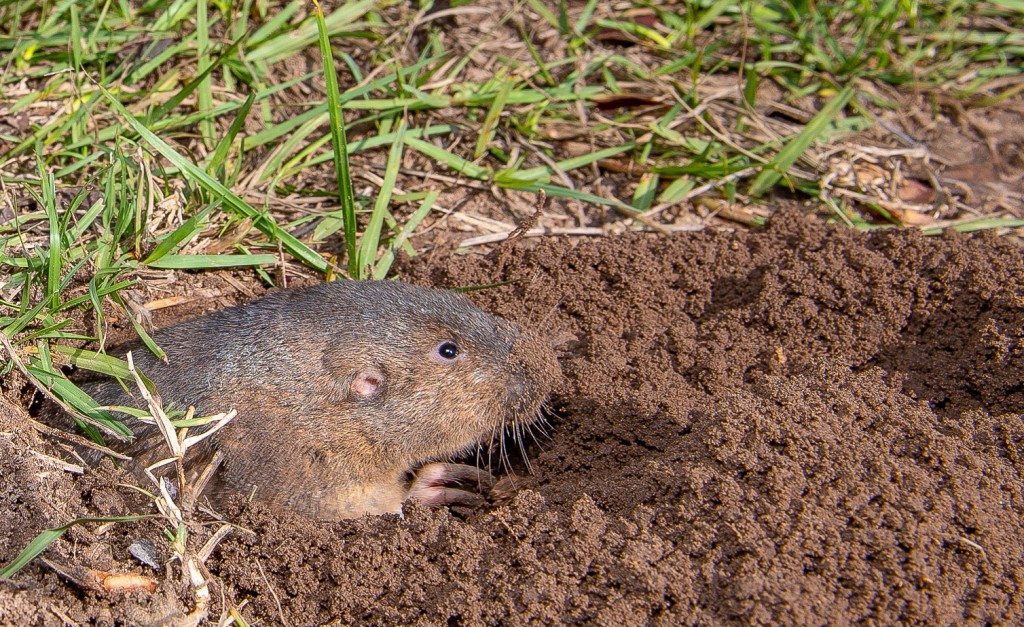 With my mammal life list now at 1899 it was time to see the skunk. And now I was stressed. So the next day, after a very muddy hike, we were able to get reasonable glimpses through the vegetation – of a collared animal (very impressively tracked down by Kamren). 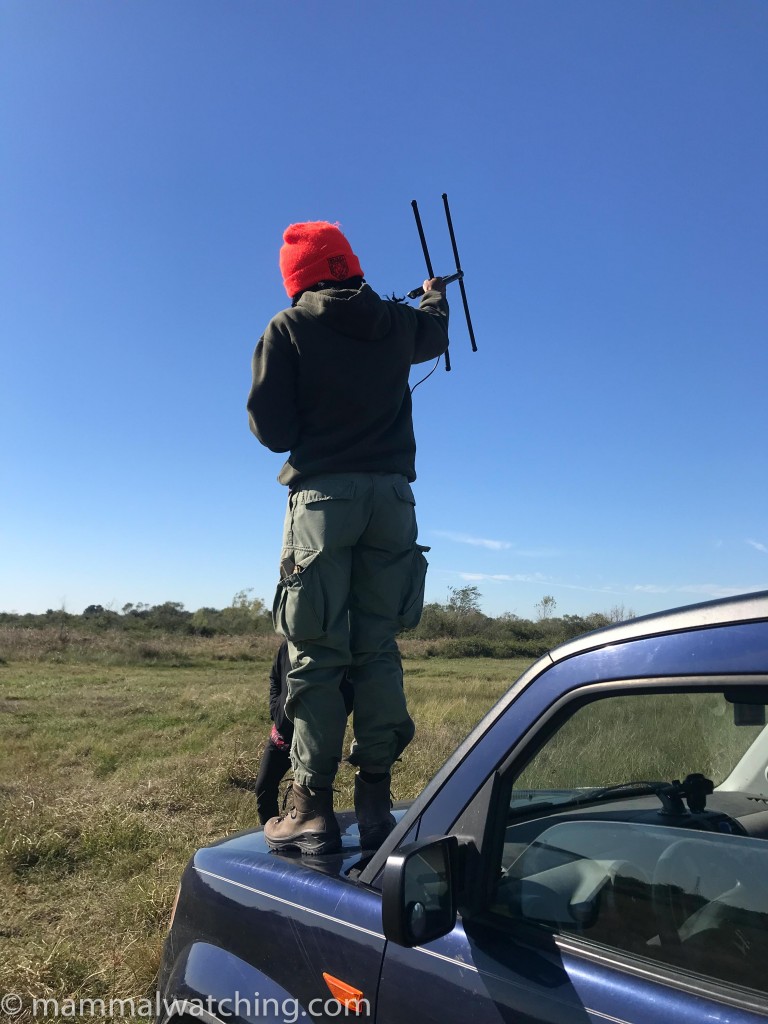 Kamren with the radio tracker 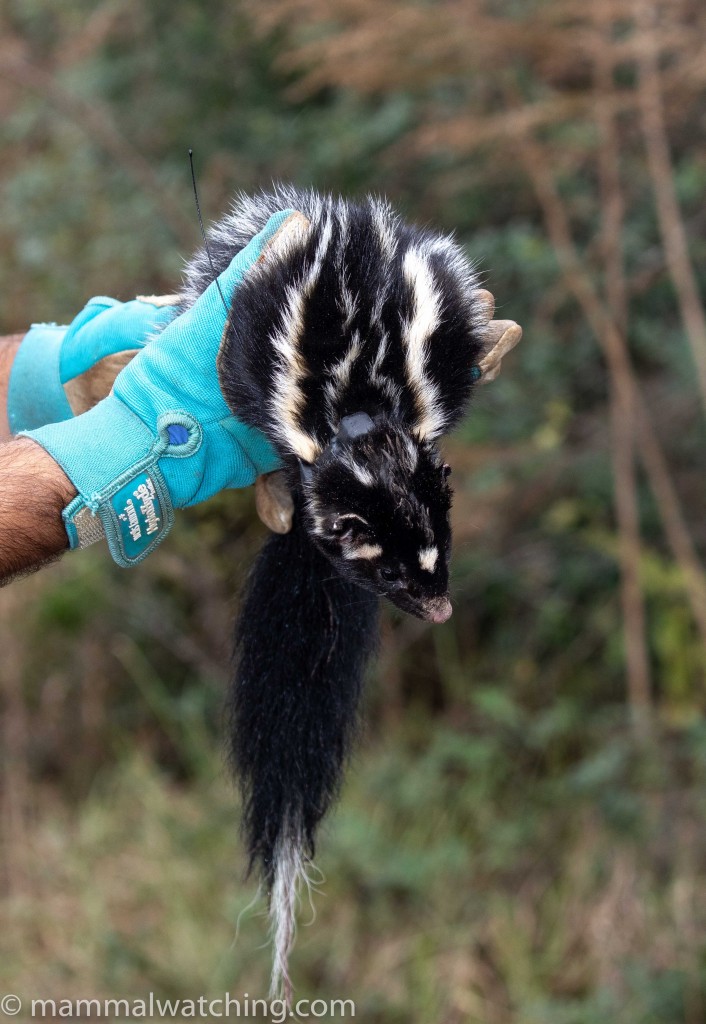 We caught another in a trap the following morning and were able to get a much better look at this beautiful species while Clint and his team performed a full medical check and fitted a radio collar.

Around the ranch we also saw a Coyote, White-tailed Deer, Raccoons, Striped Skunks, and caught a North American Least Shrew in a pitfall trap. Sadly the shrew did not survive the night and went to the museum. 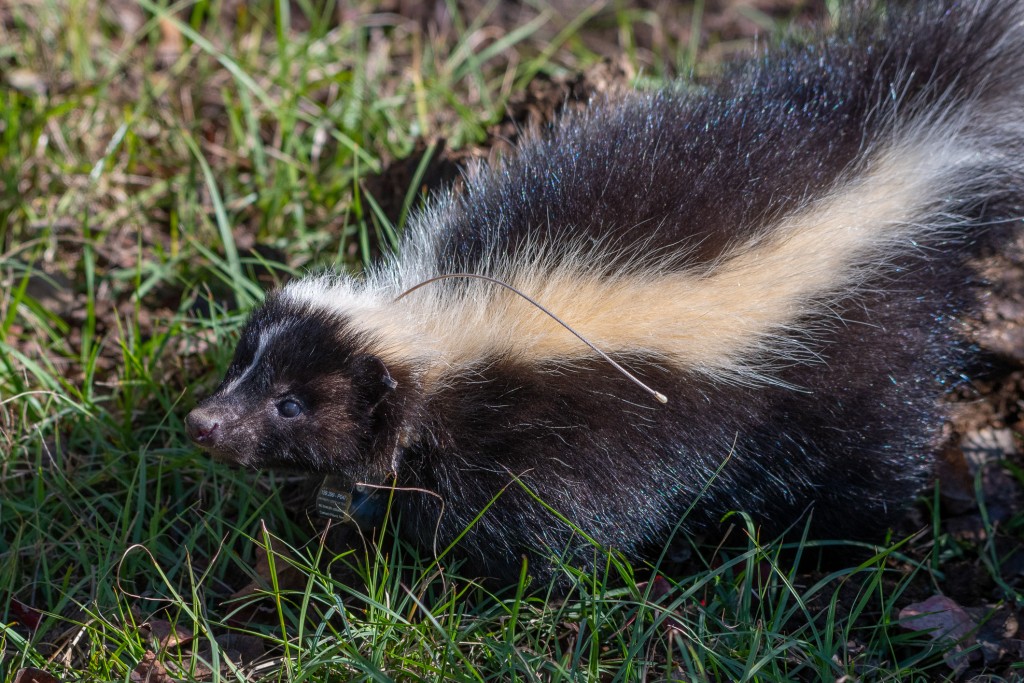 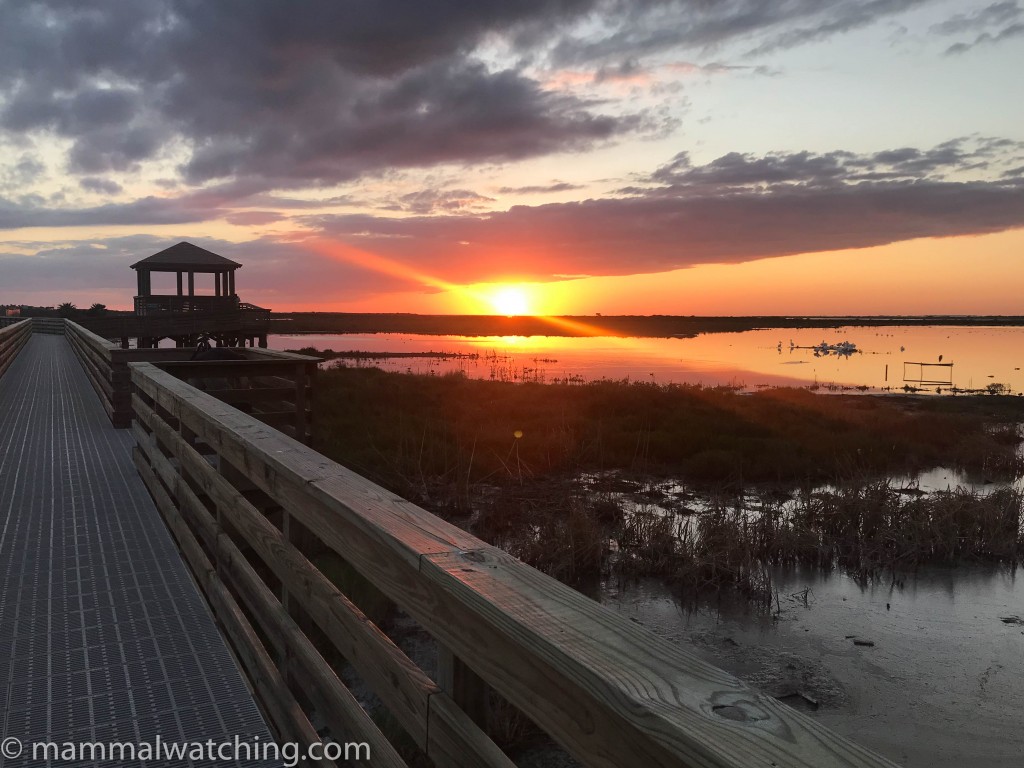 Jose and I headed south in search of Texas Pocket Gophers. There were many fresh mounds around Port Aransas and it didn’t take long to find an animal emerging from a burrow we had opened. Noticeably larger than the two species we’d just seen around Houston. Texas Marsh Rice Rats (Oryzomys texensis), a fairly recent split from Marsh Rice Rat (O. palustris), seem quite common in the vegetation along the board walk at the Port Aransas Leonabelle Turnbull Birding Centre. We saw at least two just after dark, after locating them with a thermal scope and – after considerable difficulty – finding them in a flashlight’s beam. We saw other smaller rodents here, probably House Mice, as well as Hispid Cotton Rats and we caught these species and a Black Rat in traps set in marsh scrub nearby. 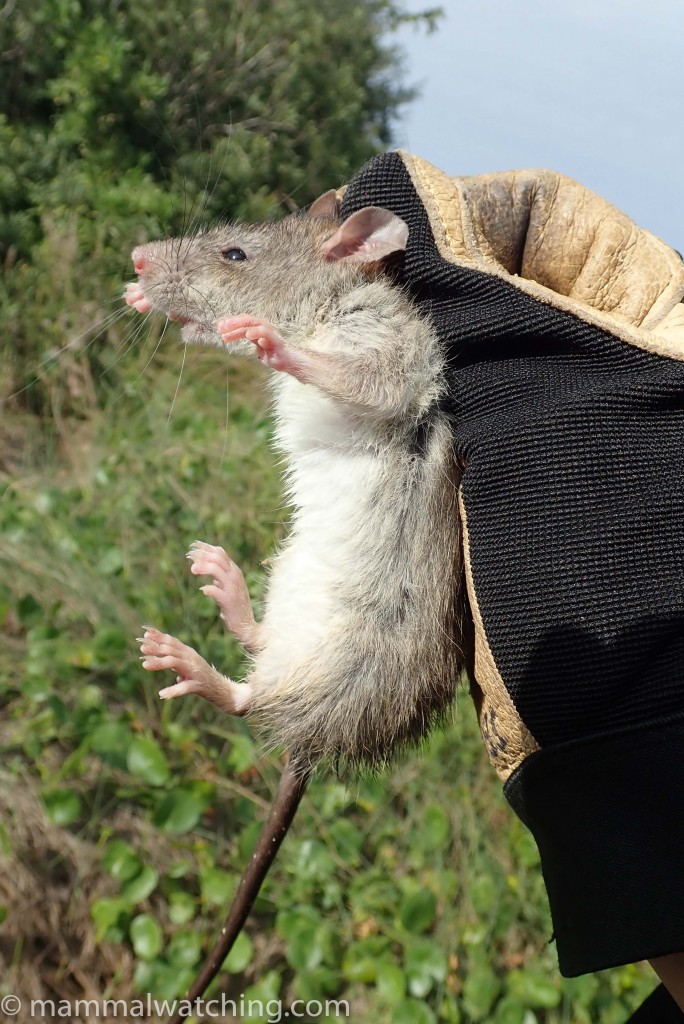 A night drive south of town produced a glimpse of a Gulf Coast Kangaroo Rat in the dunes, as well as a Gray Fox, Virginia Opossum and Raccoons. 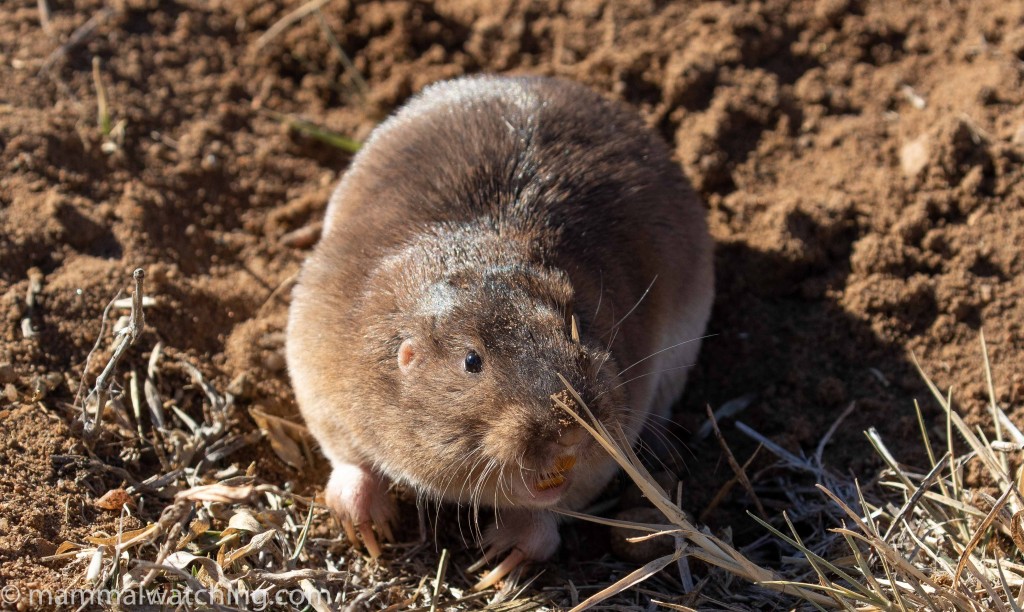 Our fourth and final target gopher was the Llano or Central Texas Pocket Gopher. Bob recommended we look around the town of Mason. Despite having caught thousands, he couldn’t resist the chance to catch another and he drove over from San Angelo to help us find one. Bob is a star.

There were plenty of fresh burrows along the road to the Mason County Airport and we caught an animal within two hours of arriving. Two hours that was largely spent explaining repeatedly to passers-by what we were up to. 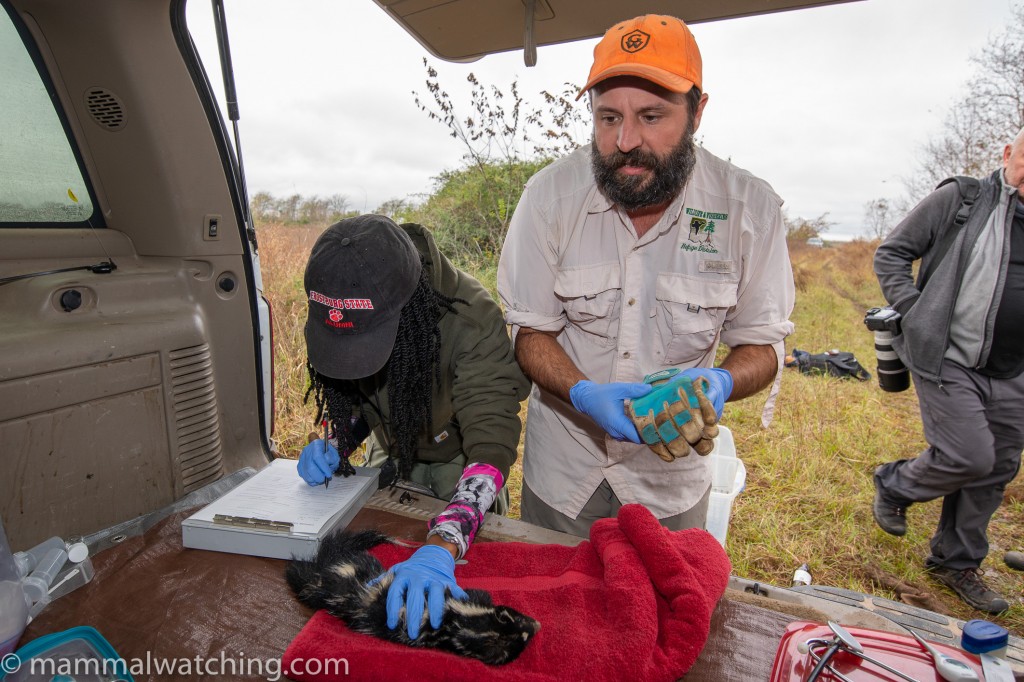 Enormous thanks to Clint Perkins and the rest of the skunk crew for sharing their time, knowledge and trying so hard to find our target mammals despite their heavy workload. Thank you Jose Gabriel for your always excellent company and photographs and for your willingness to stop looking at birds for a bit. And special thanks to Bob Dowler for everything, particularly for inducting us into the secret world of gopher watching. 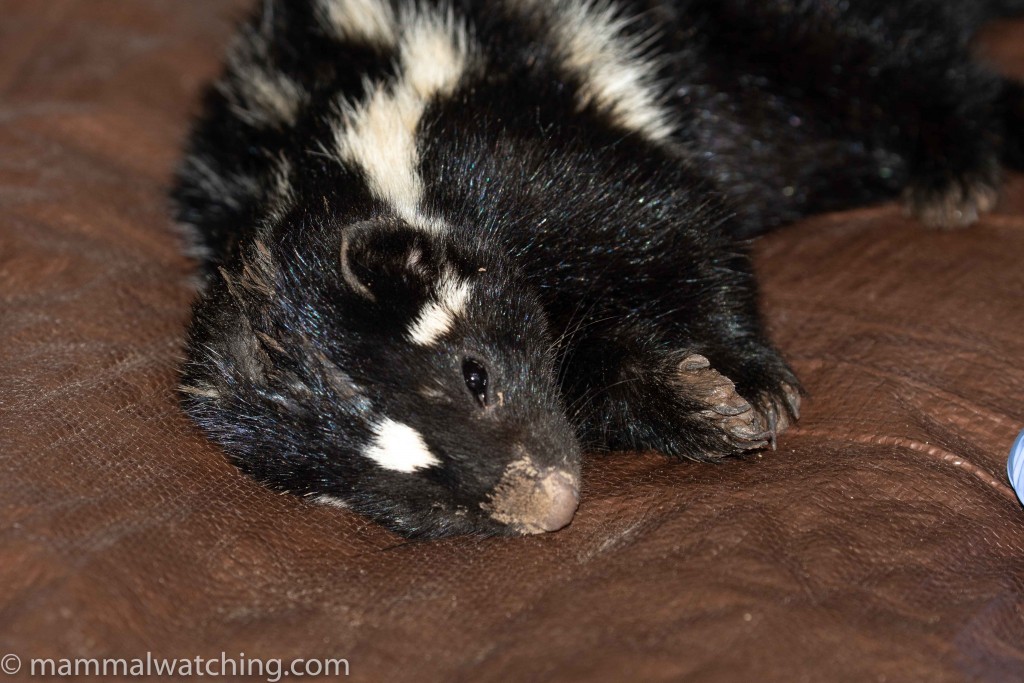