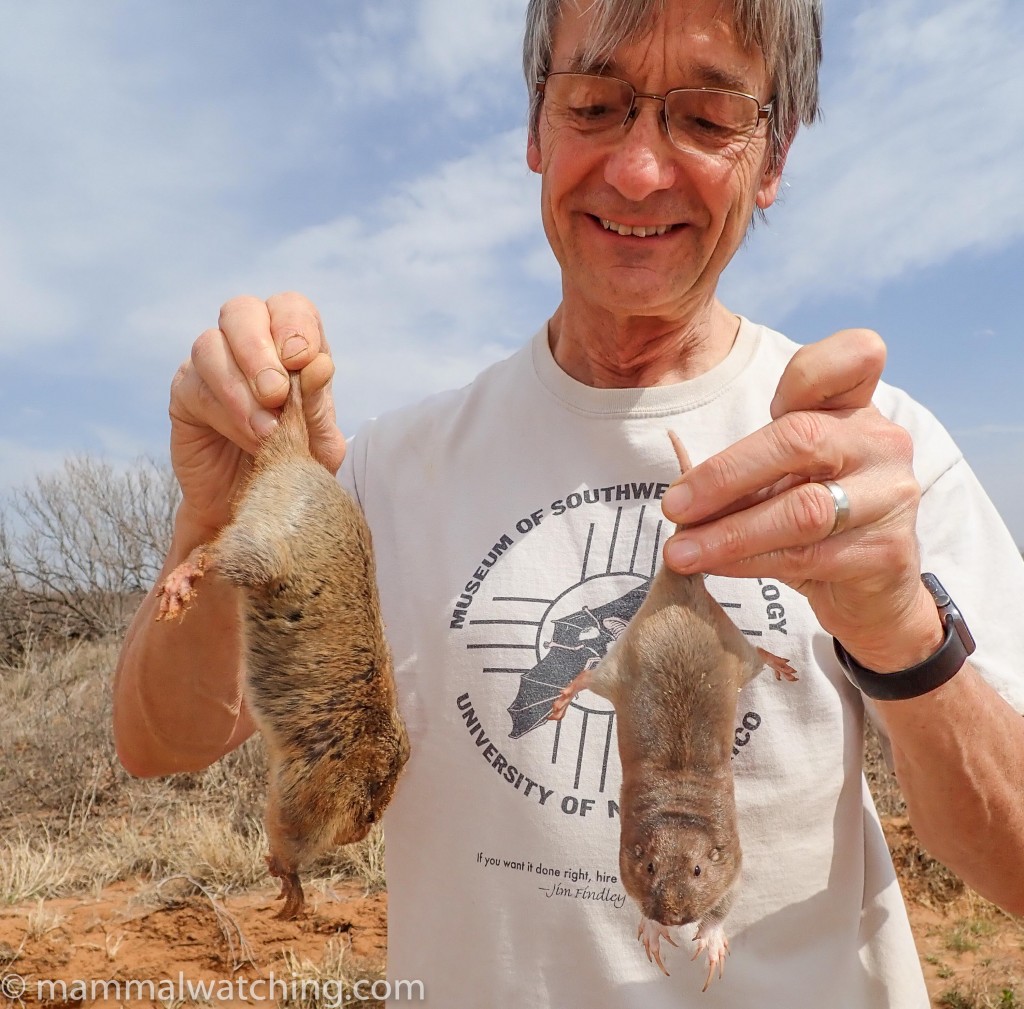 I spent the Easter weekend looking for rodents in central Texas.

Texas is, I often forget, really really big. At almost 3 times the size of the UK it is home to around 150 native mammal species, and so is one of the most diverse mammalian US States  (only beaten by New Mexico and California I read). It probably also tops the USA record books for the most Country and Christian Radio Stations per capita, and has more enormous pick up trucks per square mile than a lumberjack convention. It also wins the USA’s most friendly mammalogist competition. They came through – again – to help me see a lifer or 5.

I visited three areas, two people and saw all 5 of my key targets. 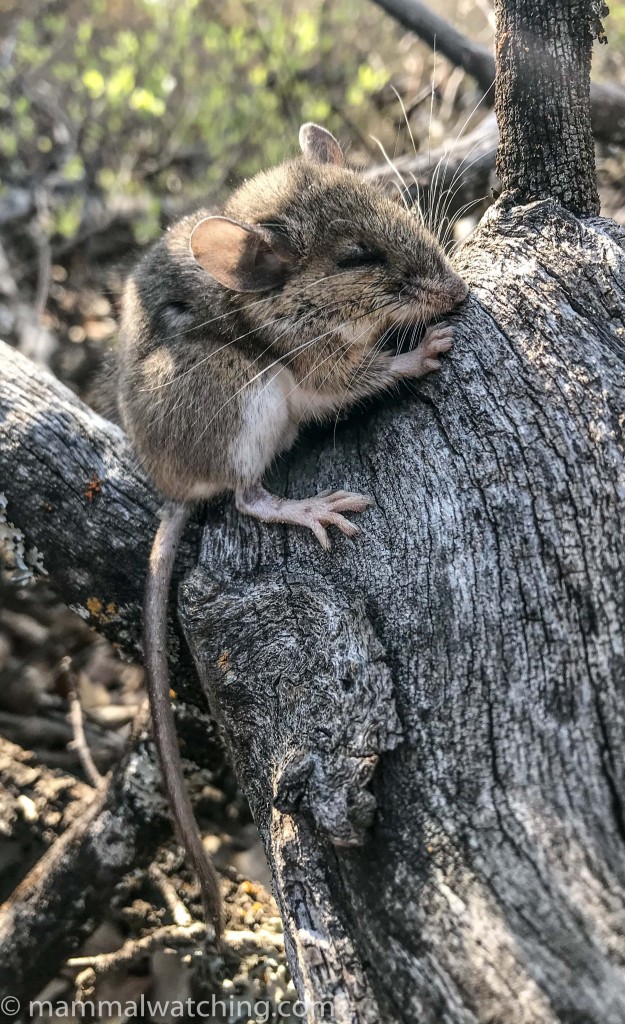 My first stop was Abilene, two and a half hours west of DFW airport, where I  met up with Professor Joel Brant from McMurry University. Joel has been running a long term trapping project on his property just outside of town and very generously offered to set all of his 320 traps with me.

The farm is a mix of oak woodland and grassland and has a diverse small mammal fauna. My main targets were Texas Mice, in the woodland, and Plains Harvest Mice in the grassland. We divided our traps evenly between the two habitats and the next morning checked all the captures, microchipping new animals as part of Joel’s study. 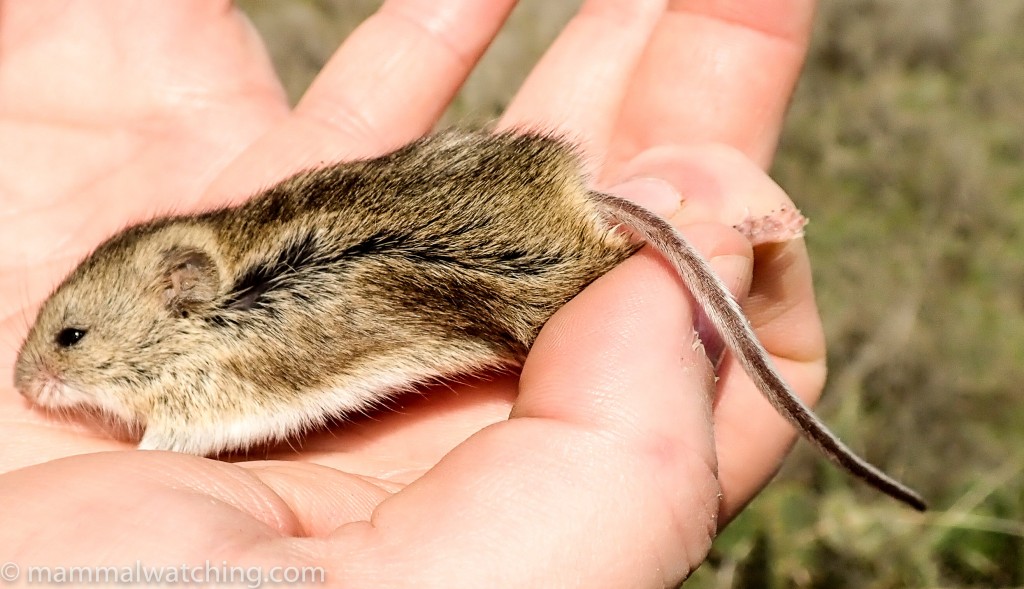 Plains Harvest Mice are smaller and have shorter tails than their Fulvous cousins.

We also caught a single Hispid Cotton Rat. We missed the other common species here – Northern Pygmy Mice – though Joel had caught them for me in pitfall traps back in December. 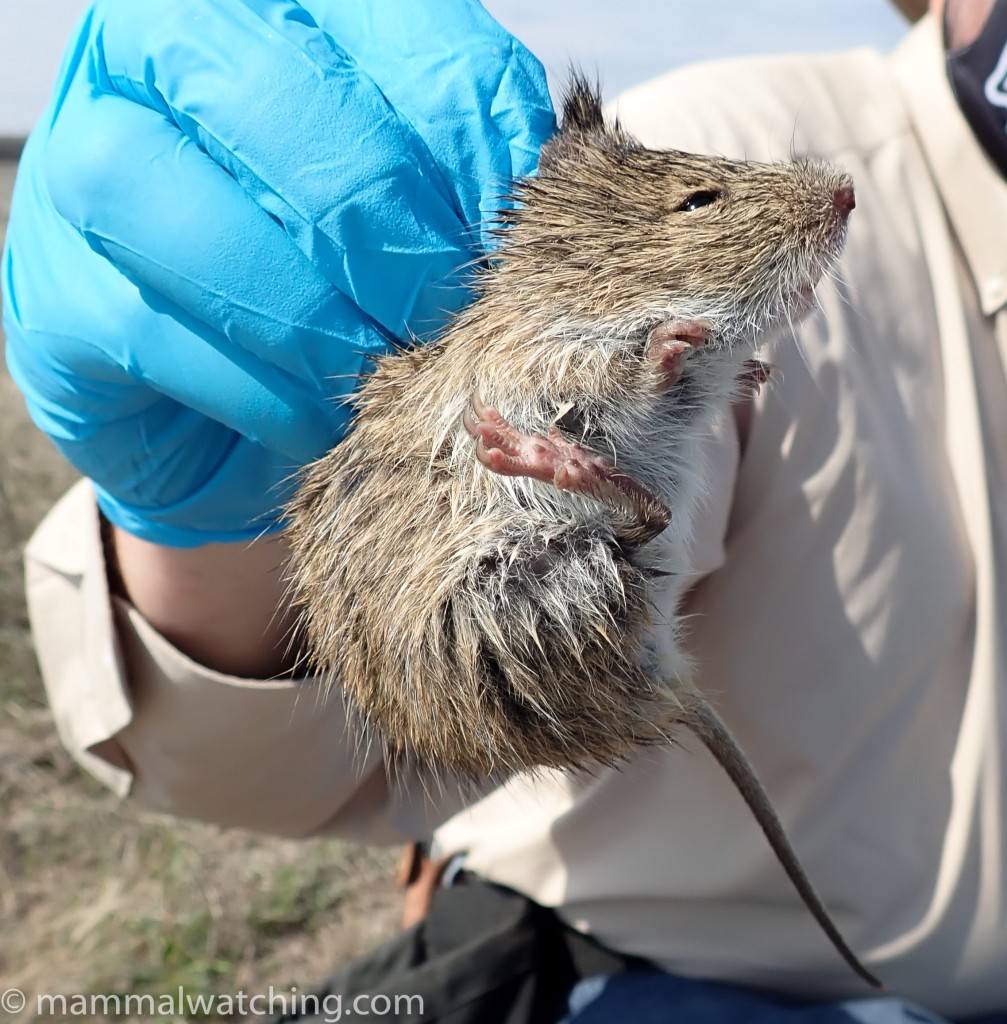 In the woodlands, we caught 16 Texas Mice in our 160 traps. The spring seems to be the best time to catch this species. Numbers – in the traps at least – decline over the summer and all but disappear by the winter. 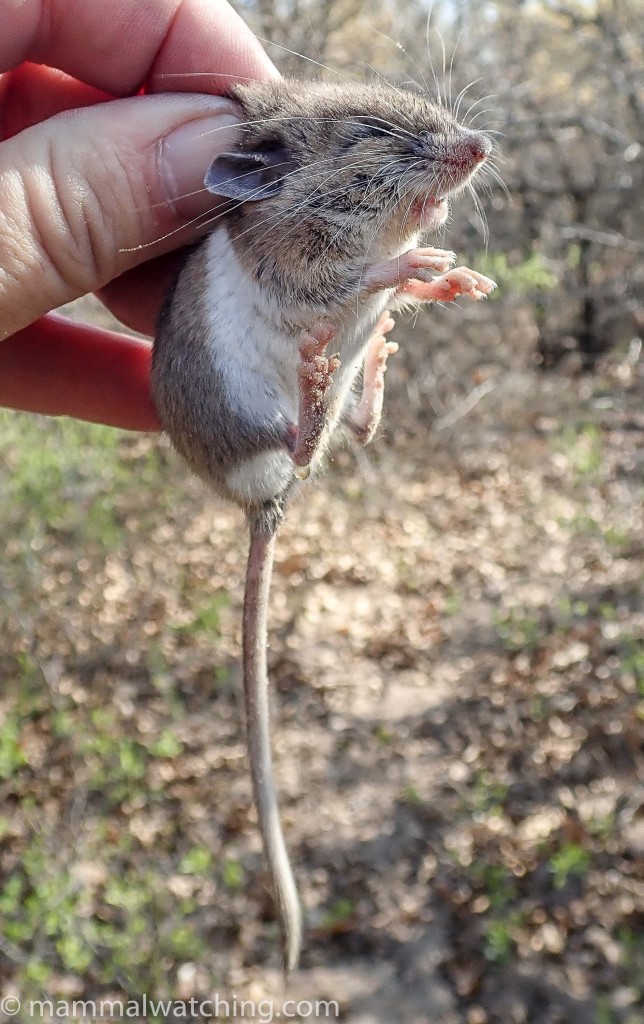 Though Joel occasionally catches White-footed Mice in the woods, the Texas Mice seem to be the dominant species there. 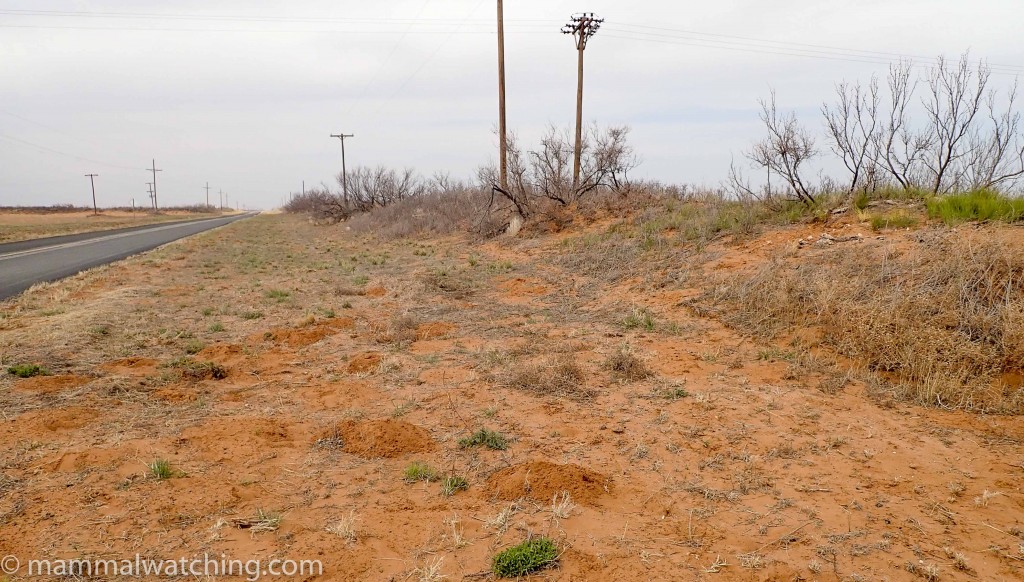 Ecstatic with my two new rodents (yes, I really was) I drove the three hours to Odessa in the sort of mood generally reserved for lottery winners. Plus I was meeting the legendary Bob Dowler, a professor from Angelo State University. If small mammal trapping is every considered a science in its own right – and of course I think it should be – then Bob would be up for a Nobel prize.

Texas has a lot of gopher species: at least 10 and with Bob’s help I had already seen five of them. The next two on my list were Knox Jones’s Pocket Gopher and – the much larger – Yellow-faced Pocket Gopher. And one of Bob’s students – Rebecca Scott –  knew a spot where we might be able to catch both, a half an hour north east of the town of Seminole (here). 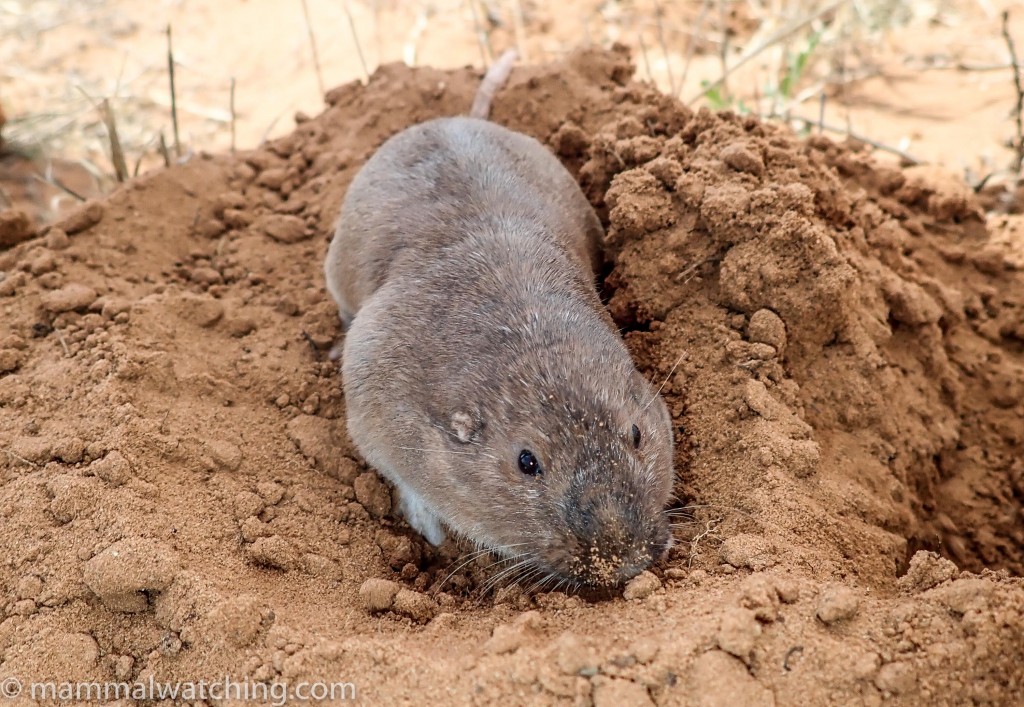 Without Bob’s help I would have tried opening up a few burrows and seeing if a gopher might emerge. But instead we set 10 or so live traps in various tunnels. Both species co-occur here and there seemed no discernible difference between their mounds. But, dig down and there was a noticeable size difference in the diameter of some tunnel systems. Though a small Yellow-faced Pocket Gopher might have a similar size tunnel to a large Knox Jones’s, there was no mistaking a full size Yellow-faced tunnel. If you can find the tunnel that is. I struggled. They are considerably deeper in the ground than I am used to and the $5 children’s shovel I had just bought especially wasn’t up for the job. Though it was worth the conversation with the lady in the Semiole hardware store when I bought my shovel and poking stick. “You planting over Easter?” she asked. She held her smile but her eyes betrayed her bemusement when I muttered something excitedly about looking for gophers.

We went for lunch after setting the traps and an hour and a half hour later Bob had caught both species. The Yellow-faced Pocket Gopher was twice the size of the Knox Jones’s. High fives all around and I was now in the mood reserved for two time lottery winners. 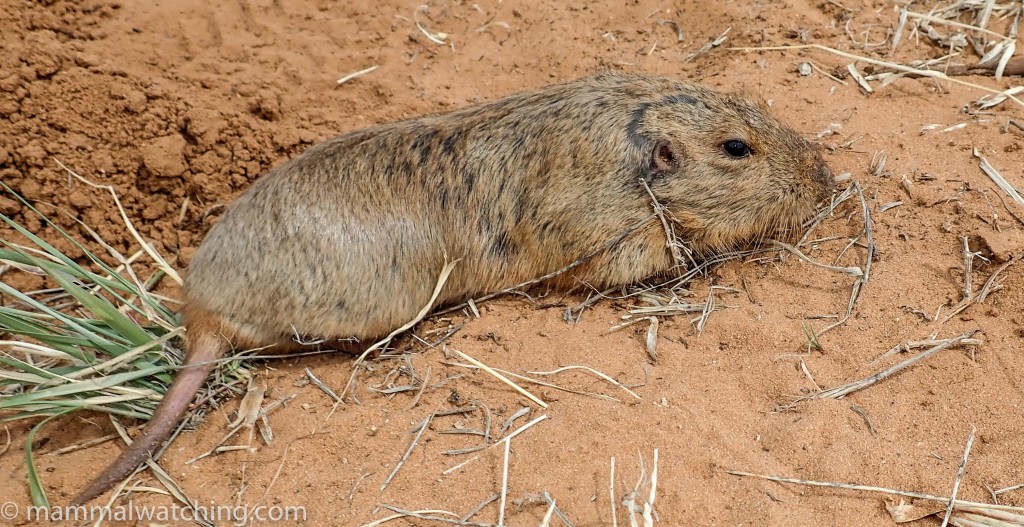 After scoring both species so quickly Bob was keen to add to my haul and we decided to spend the night around the town of Monahans, two hours to the south west. There might be a chance here to catch several interesting species including Plains Pocket Mice and one or both of Northern and Mearns Grasshopper Mice. Indeed Joel Brant in Abilene had said that grasshopper mice were very common in between the dunes in Monahan’s Sandhills State Park. 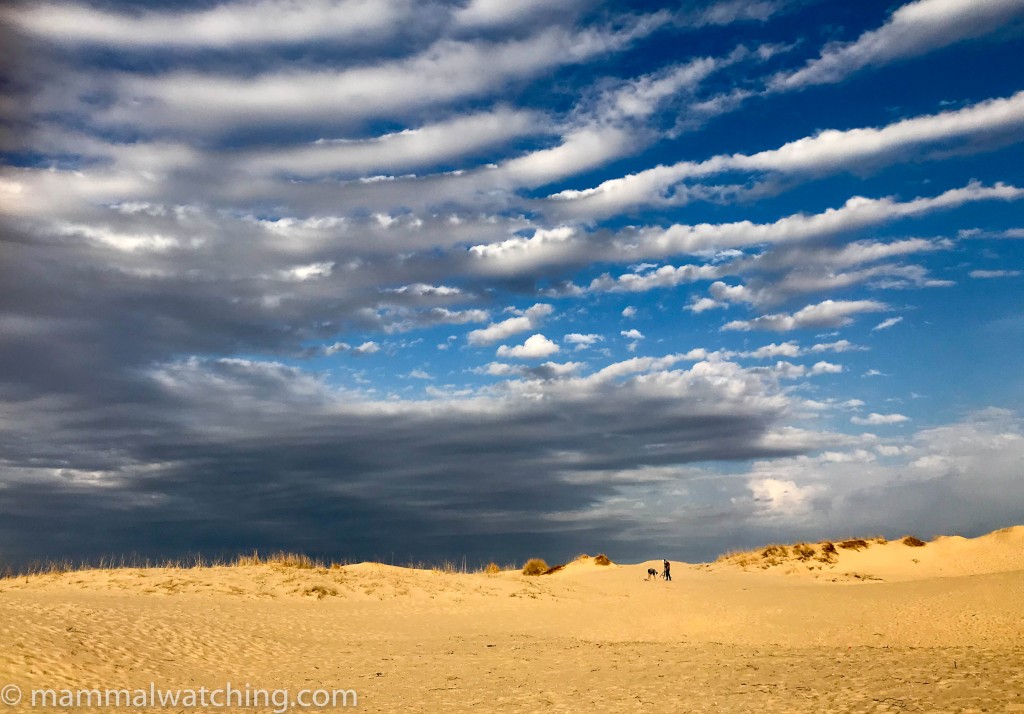 After taking a drive through the state park, and seeing three Javelina, we set 140 sherman traps along a highway close to town. Finding any sort of land to trap on is a challenge in Texas, even if – like Bob – you have the permits. There are fences and “trespassers will be prosecute” signs just above everywhere.

But my luck had run out. The traps contained just three Sonoran Deer Mice and an Ord’s Kangaroo Rat. We wondered whether the big Texas freeze in February might have knocked small mammal populations right down in this area after temperatures had hit 0 fahrenheit this year.

My last stop was Wichita County, two and a half hours north west of Dallas, and home to Texas Kangaroo Rats.

The endangered, and extremely local Texas Kangaroo Rat is one of the harder to see of the USA’s dipodomys species and is now restricted to just three counties in Texas. My chances of seeing one weren’t helped by a recent (and hopefully temporary) population crash last year. But again I had help. Clint Perkins, who is running the Eastern Spotted Skunk research I had visited in December, connected me to kangaroo rat research John Stuhler. John gave me some ideas on where to look and following his advice I spent several hours driving along unpaved roads west of Wichita Falls.

Road cruising – especially on the dirt – is a good way to find this species. I saw skunks, raccoons, opossums, cottontails and jackrabbits  but no rodents other than an unidentifiable mouse crossing the road. But when I got my thermal scope out close to midnight in some particularly good looking habitat it was a different story. Loads of rodents were out and about. There was no moon and the temperature was in the high 50s.

Seeing many of this heat blobs well enough to identify then was more of a challenge, though several generously froze in the fashlight beam allowing me to walk right up to them. Hispid Cotton Rats were common and I caught a Hispid Pocket Mouse by hand.  I finally saw two animals well enough to be certain they were kangaroo rats and I was, again, able to walk right up to one of them, hunkered down in a rabbit hole on the edge of the road.

Unfortunately it was sitting on its tail. Texas Kangaroo Rats have a distinctive white flag on the end of their tail, while Ord’s Kangaroo Rats, also in the area, do not. But I was able to see a a little white fur poking out from underneath the animal and John Stuhler confirmed later that while they had recorded multiple Texas Kangaroo Rats in this particular area the soil was not sandy enough for Ord’s.

My fifth lifer or the trip and the only USA Kangaroo Rat I hadn’t seen before. Yay me.

A very big thanks to all those who helped directly and indirectly with this trip but particularly Joel Brant and Bob Dowler for all their efforts in helping me add a few more mammals to my list during this long dark COVID winter. When Texas picked “friendship” as its state motto they probably weren’t thinking about mammal watchers. But they could have been.