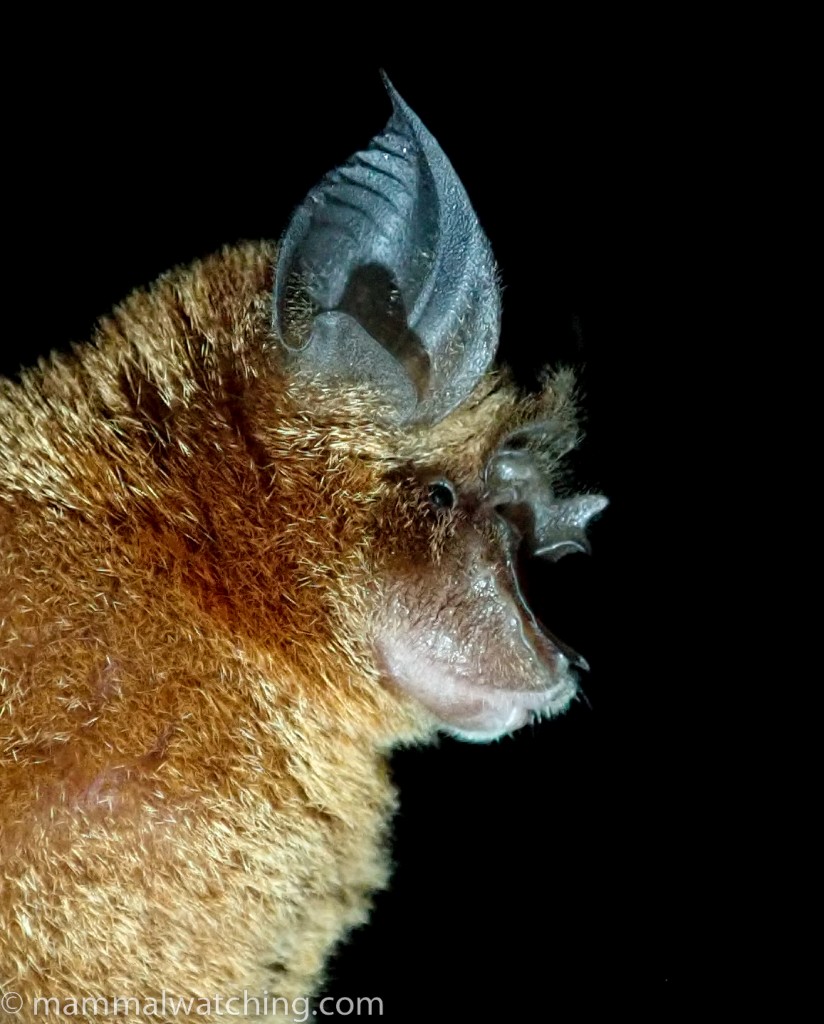 I spent 24 hours in Singapore on my way home to New York after two weeks in Borneo in July.

When I booked my ticket I had a vague notion of a day on the island, enjoying the hotel pool and a cocktail or two at the Raffles Hotel bar before a 17 hour flight home. Clearly I was not thinking straight and a week before I left for Borneo I realized there were a ton of mammals in Singapore I hadn’t seen. I needed help.

I put the word out on social media. I emailed academics. I asked Merlin Tuttle. And three separate people all replied suggesting I needed to talk to the same man: Benjamin Lee from Singapore’s National Parks Board.

I opened my computer to send him an email and there was one waiting from the man himself. He’d heard I was coming and very kindly offered to try to show me “a few” bats.

This was an understatement. He ended up meeting me at the airport and embarking on a 10 hour whistle-stop bat chase all around the city. I have said it before but I say it again. Bat people are the best. And Ben is one of the best bat people! 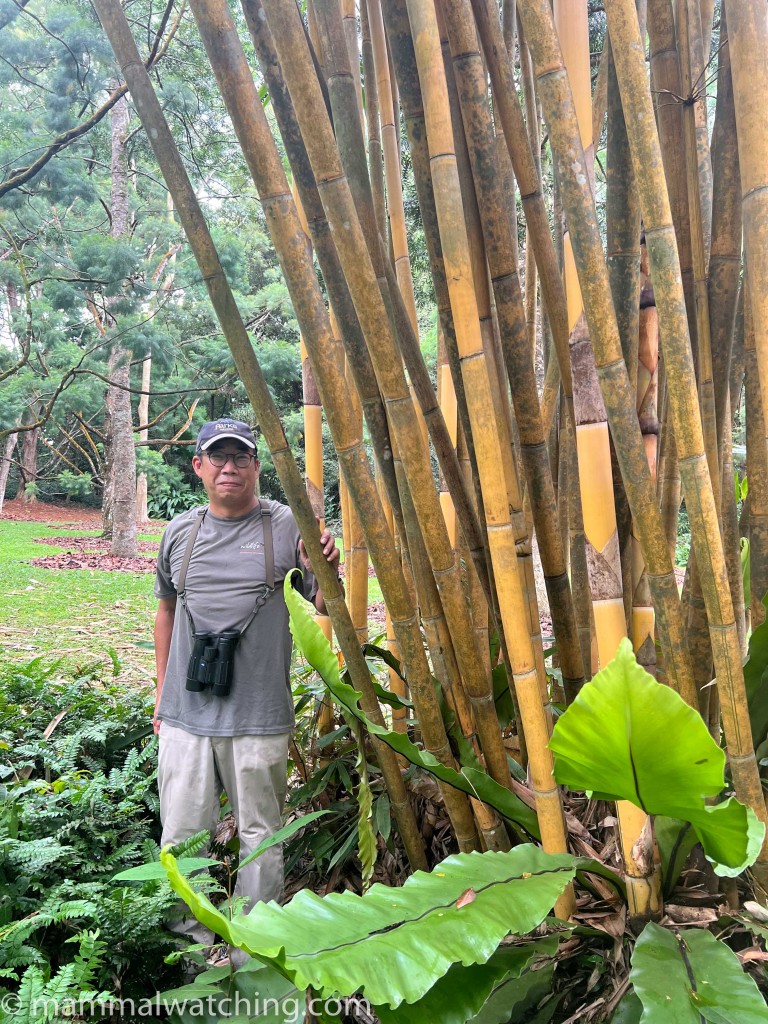 Ben, Bamboo and the Botanic Gardens

Ben is a Singaporean scientist who is now director of wildlife management research for their national parks board. He has worked on many species over the years – mammals, birds and herps – and is one of the authors of a lovely book on Wild Singapore (John Beaufoy publishing).

I arrived from Kota Kinabalu about midday and after a quick lunch stop Ben and I spent the afternoon criss-crossing the city from one bat roost to the next.

Singapore’s botanic gardens are worth a visit in their own right. The fact that you can find Greater Bamboo Bats roosting in the bamboo stands is obviously the highlight.

Although both Greater and Lesser Bamboo Bats have been recorded in Singapore, the former are much more common and Ben said no one had found a roost of the lesser species. So he was pretty confident we were looking at the larger flavour 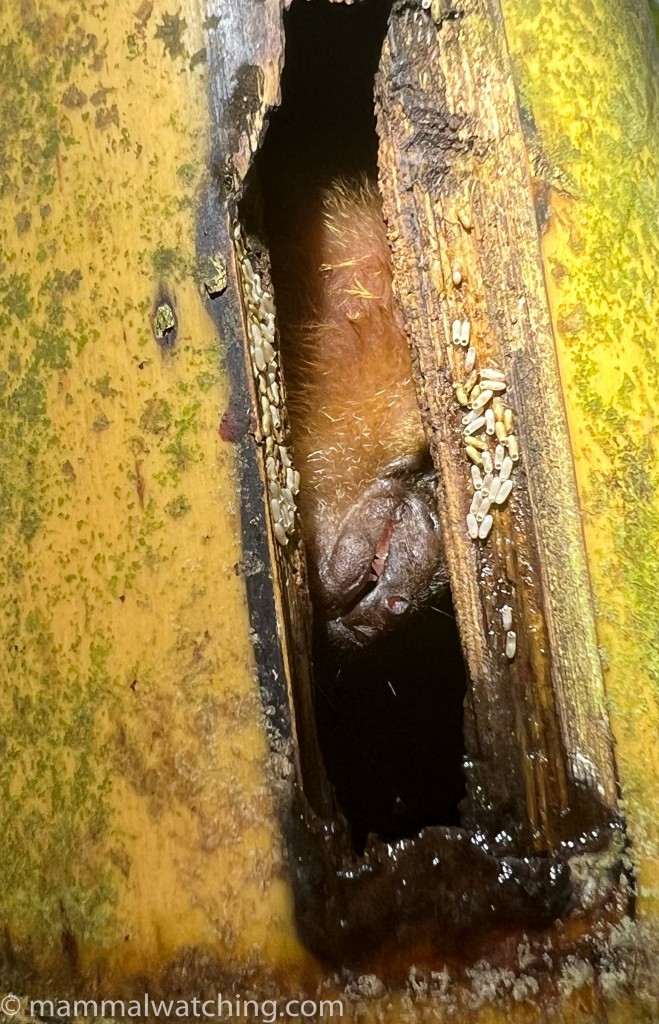 Smooth-coated Otters are common in various  watercourses around the city including in the botanic gardens where signs warn visitors “Do Not Feed the Otters”  We did not run into any but I am pretty sure with some dedicated effort we could have seen some. One of Ben’s colleagues sent him a photo of one sleeping in a bush that afternoon. 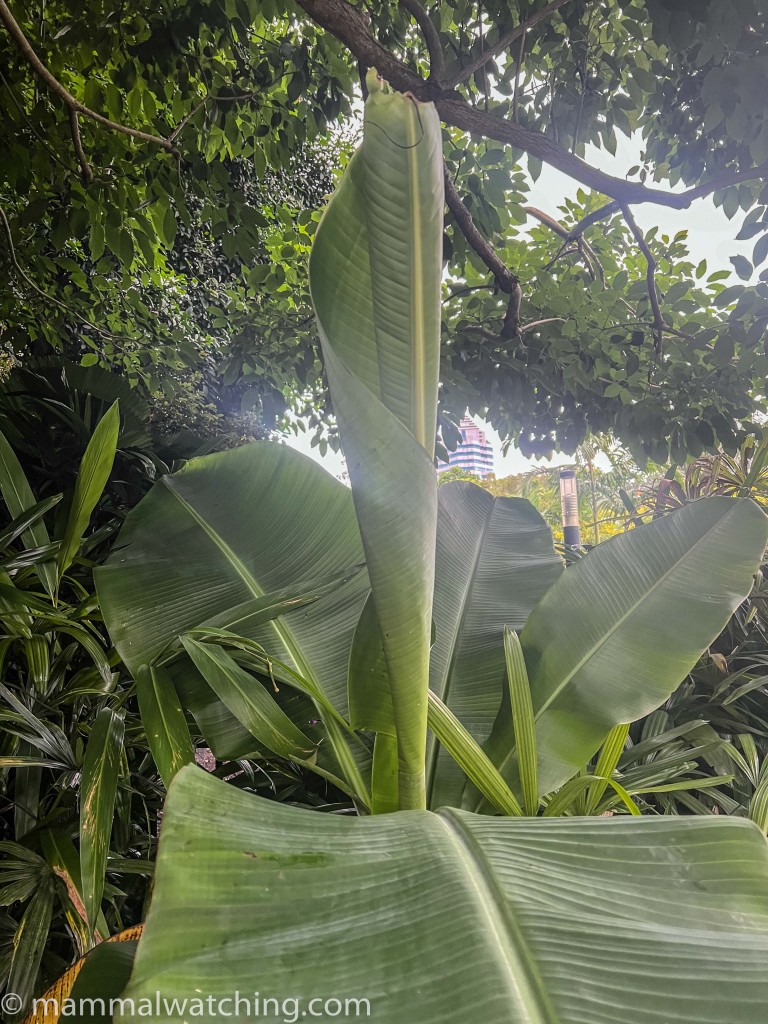 It took Ben longer to find me a Nepalese Whiskered Bat. They roost in rolled up banana leaves. After checking various banana plants in the botanic gardens Ben eventually tracked down one roosting bat in the HortPark. 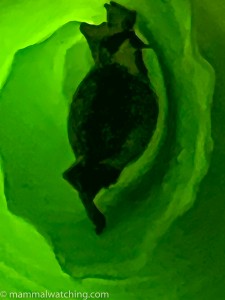 A quick visit to some apartment towers, home to a roost of Lesser Asian House Bats, was less successful. The bats – roosting a dozen or more floors above us – are still there judging by the fresh droppings. But we could not get an angle to see into the roof crevice they were in.

Nor did we have any luck finding the Horsfield’s Myotis that often roost in weep holes along a large culvert off Boon Lay Way. 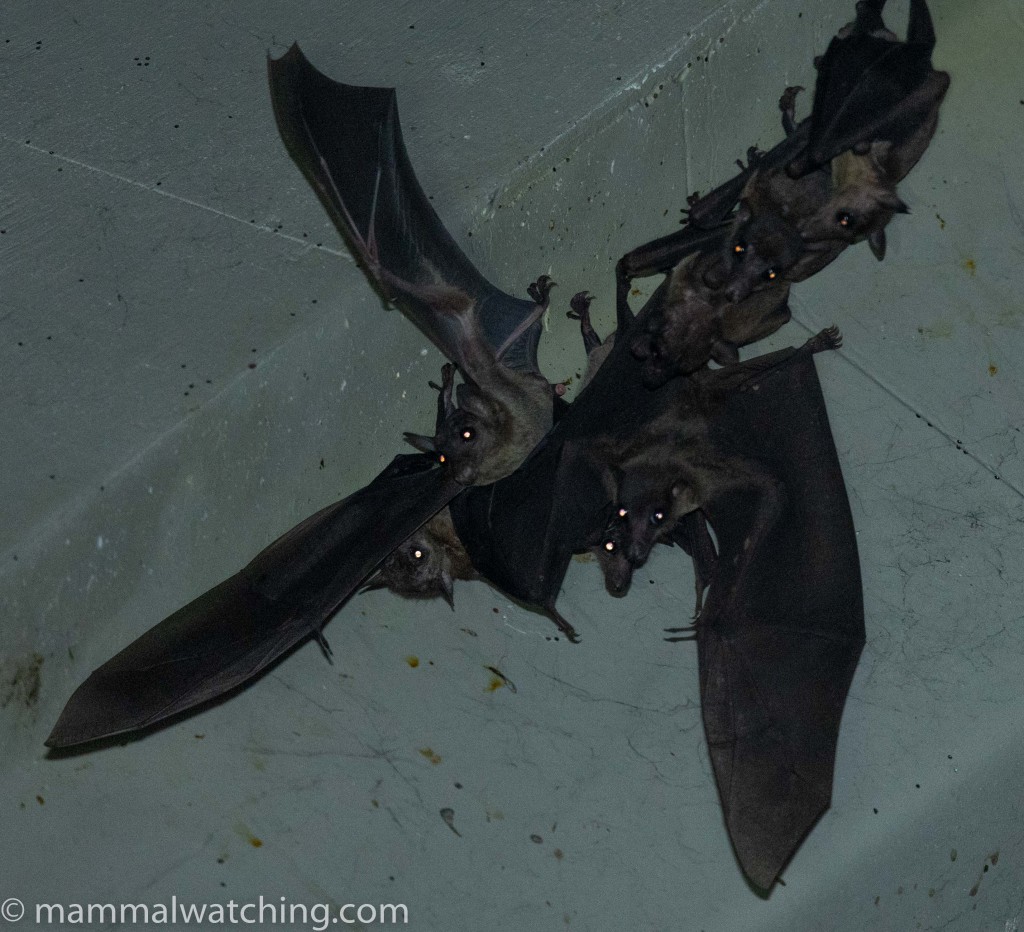 As the sun was setting we headed to dinner, stopping to see a colony of Dawn (Cave Nectar) Bats under a flyover bridge here. We parked briefly near the intersection of Rifle Range Road and Jalan Gaharu.

Ben and two of his colleagues – Dillen and Sandra –set up a harp trap at the Dairy Farm Nature Park in the late afternoon, just outside Ben’s office. Though the park is closed to the public at night, and capturing bats without a permit is obviously forbidden, Ben wanted to record some reference calls and so he arranged to set up the harp trap when I was in town.

Before we returned to the harp trap we stopped in at a house in one of Singapore’s oldest neighbourhoods around Binjai Park, where the owner was kind enough to welcome us in to enjoy the Javan Pipistrelles that roost in a gap above the sliding door to their kitchen. The bats were zipping in and out of the roost but would not pose for a picture. I was happy to see that the bats were so welcome inside the house. 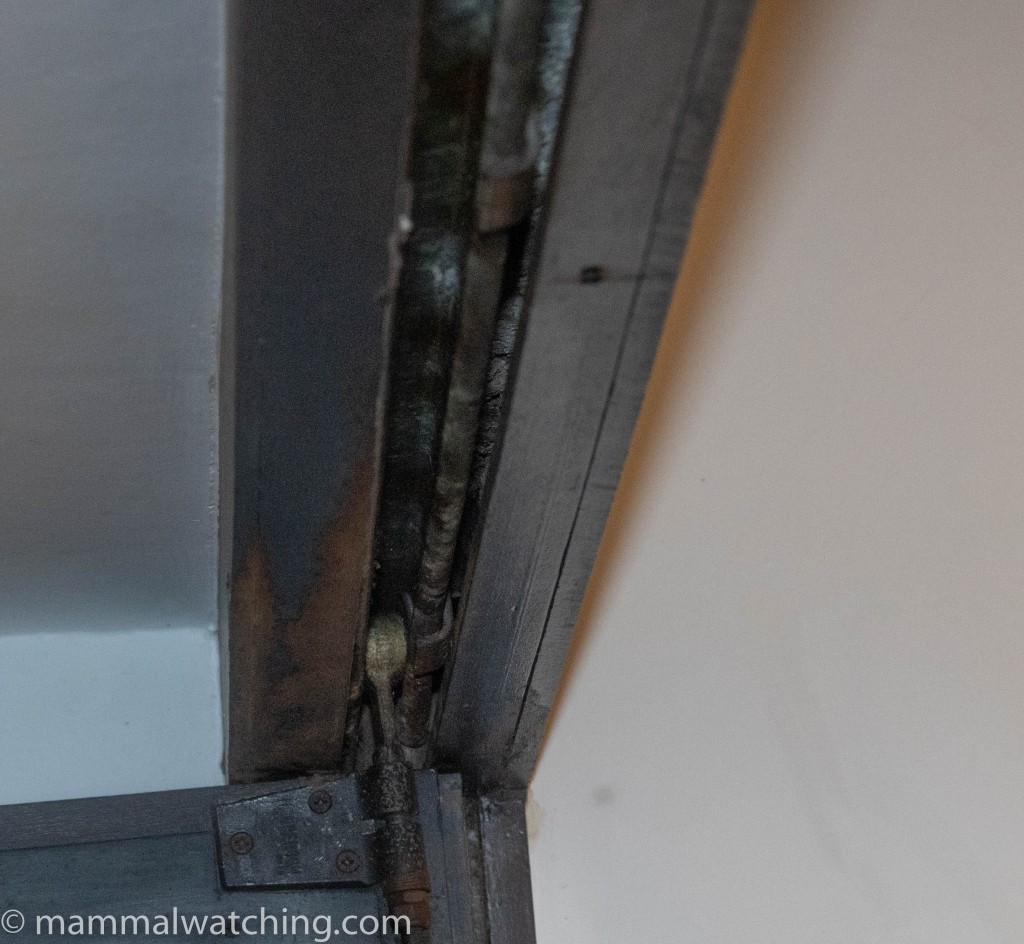 With three lifers already we returned to the Dairy Farm Park to check the harp trap.

Ben predicted we would catch two species. He was correct. We caught six bats and five of them were Glossy Horseshoe Bats, another lifer for me. 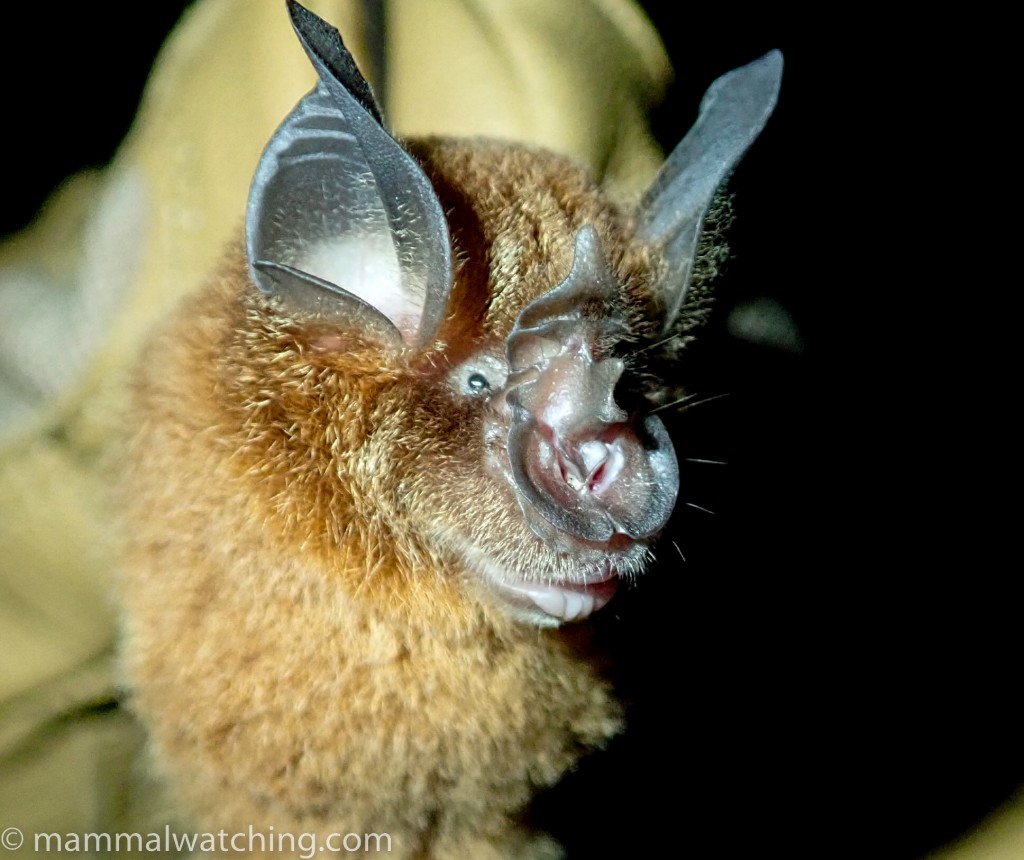 We also caught one Bicolored Roundleaf Bat, as Ben predicted.

I was only carrying a small camera so did not get a chance to photograph the Sunda Colugo that was conveniently parked on top of a small tree near the trail. We also saw a Sunda Palm Civet, Lesser Mouse Deer and Wild Boar during our 30 minutes in the forest after dark. There were plenty of Long-tailed Macaques during the day. 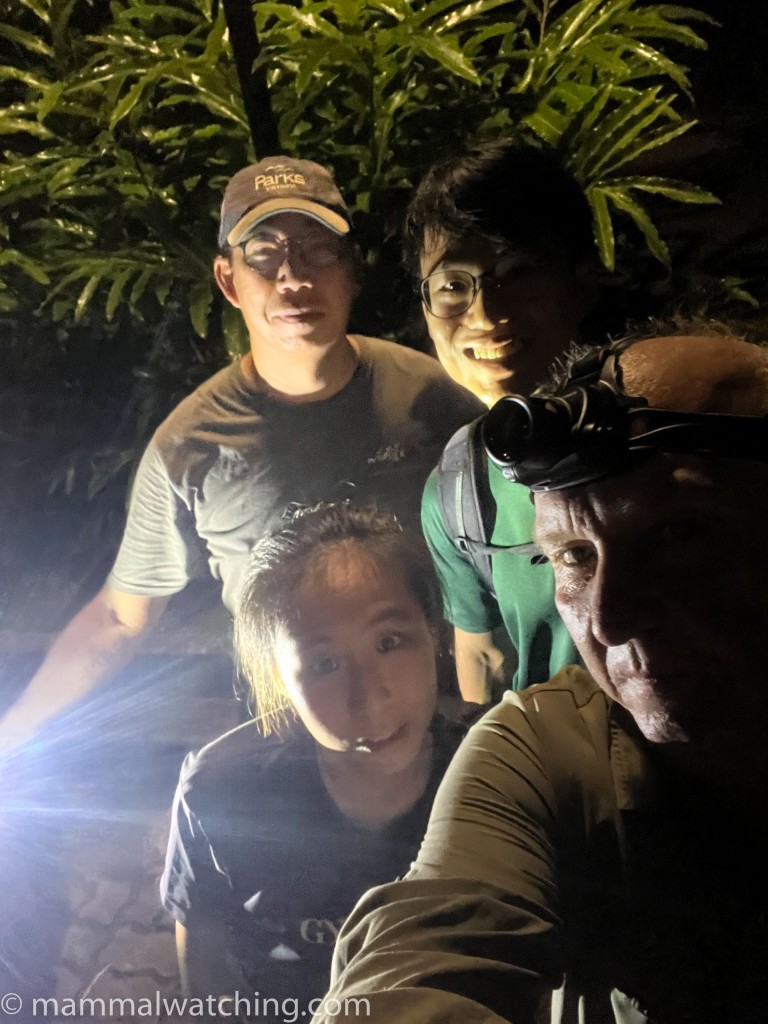 Ben, Dillen, Sandra and me

Ben dropped me back at my hotel at 10.30. I wanted to sleep but could not resist a trip to the forest to look for a Sunda Pangolin.

One of the difficulties in looking for wildlife in Singapore is that many of the parks close at night. One area of forest that is accessible after dark is the Mandai T15 trail.

Pangolins, while not easy to see in Singapore, are probably seen more here than anywhere else I can think of. I imagine that there is very little poaching in such a regulated country and Ben thought the leading threat pangolins face here comes from road fatalities.

I was joined by Kenneth Chin a talented photographer I knew from Instagram. He brought along his friend – Law Jai Bao  – who has been monitoring the local Raffles Banded Langurs, a species I was aiming to see the next morning.

We walked the trail from 11.30pm to 2am and it was quite productive.

I stopped counting the Lesser Mouse Deer after we got to 20.

A large hot lump on the forest floor turned into a sleeping Wild Boar on closer inspection. The pig was fast asleep, and half submerged in the leaves, oblivious to us as we walked up to within a few feet. I guess you can sleep soundly if there aren’t any leopards or tigers left to bother you. 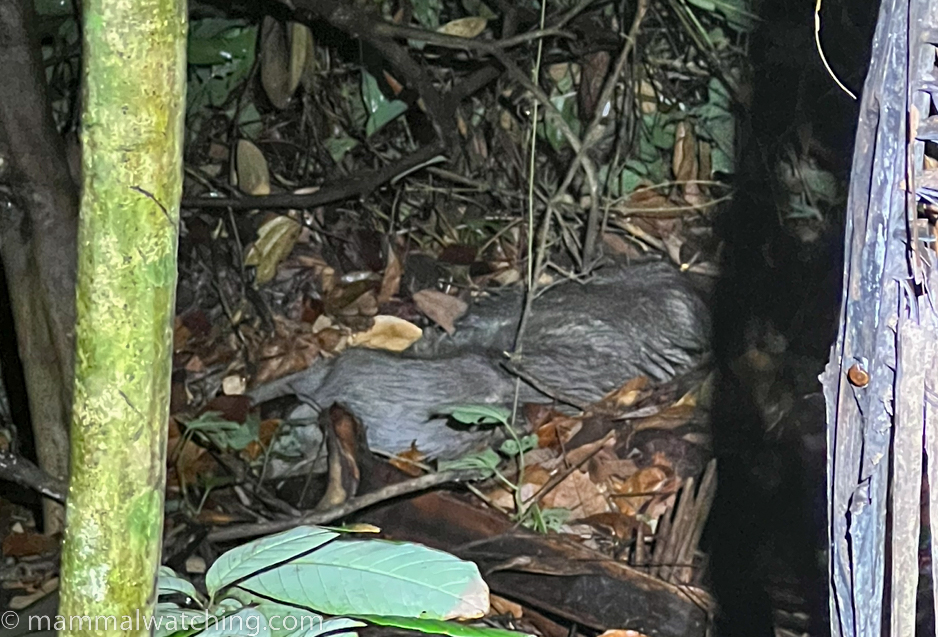 We also had one Sunda Palm Civet, and a smallish – Maxomys–sized rat went unidentified.

In the absence of pangolins, the best sighting for me was of a large, pale brown rat waddling through the undergrowth. It was too large and to fluffy to be anything other than Annanadale’s Rat, another lifer.

The fauna of Singapore is well documented which helps turn sightings like this into confirmed observations. My aching back and feet meant I had left my camera at home. 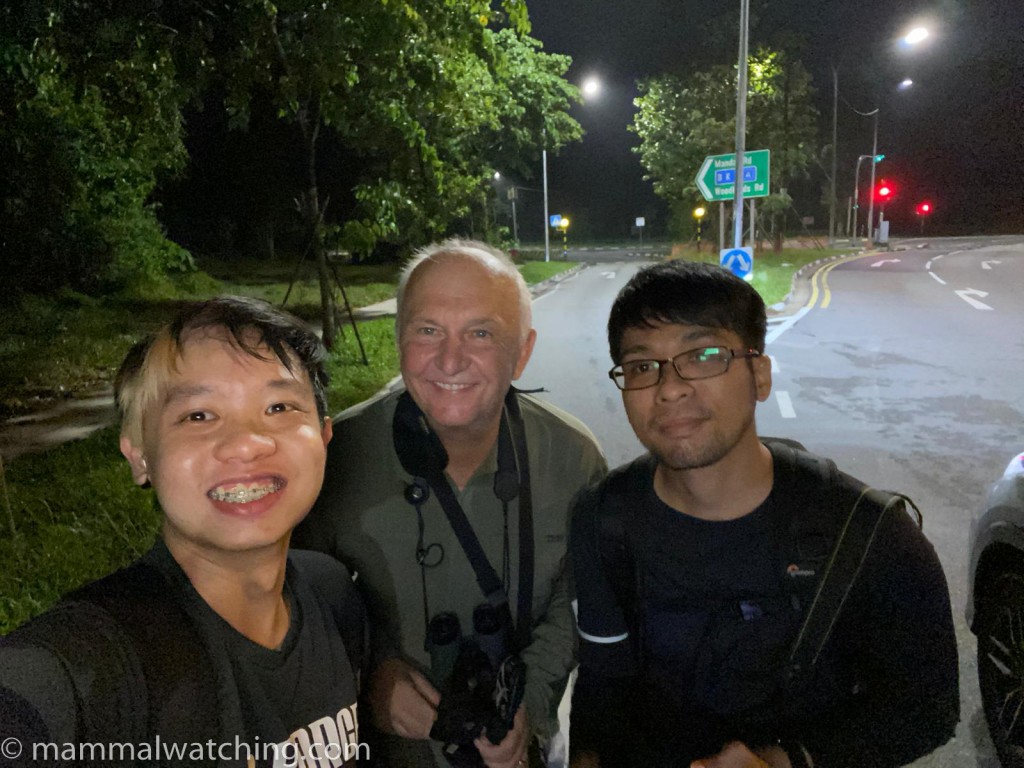 I had planned to look for Banded Langurs at dawn the next morning: a troop can usually be tracked down in Thompson Nature Park. But the timing proved ambitious when I realized I would have at most an hour of daylight to find the monkeys, before I had to return to the hotel for my luggage and continue to the airport. The thought of an extra hour in bed was also pretty appealing.

The monkeys can take a little bit of tracking down but the population in Singapore seems to be doing well so I will try next time.

Thank you again to Ben Lee for being so generous with his time and finding me so many species, and to his colleagues Dillen and Sandra from the national parks team. All three were good company and great naturalists. And though Dillen and Sandra are both birders at heart I could see they were on the path to conversion to the mammalwatching cause!  And thank you to to Kenneth and Law Jia Bao for their advice and company too.