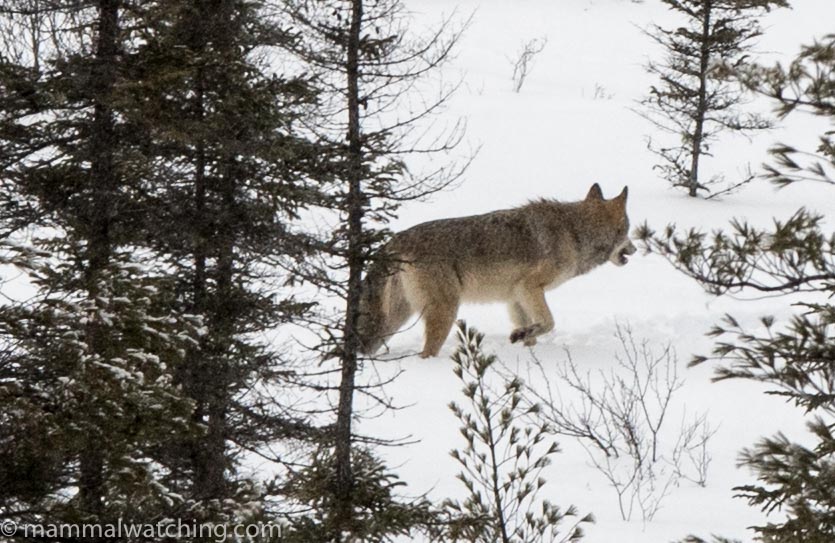 Fishers were at the top of my list of mammals I wanted to see in the USA when I moved here five years ago. And despite at least seven attempts to see one they had remained my most wanted. These were becoming more than just a bogey beast for me: I was starting to believe I might have  fallen victim to a Fisher Curse, after a string of bad luck of Tutankhamen’s tomb opening proportions. Previous trips had resulted in a speeding ticket, a run in with the Quebec cops, losing my rental car keys and what may well have been the low point of my daughter’s uneasy relationship with mammal trips. 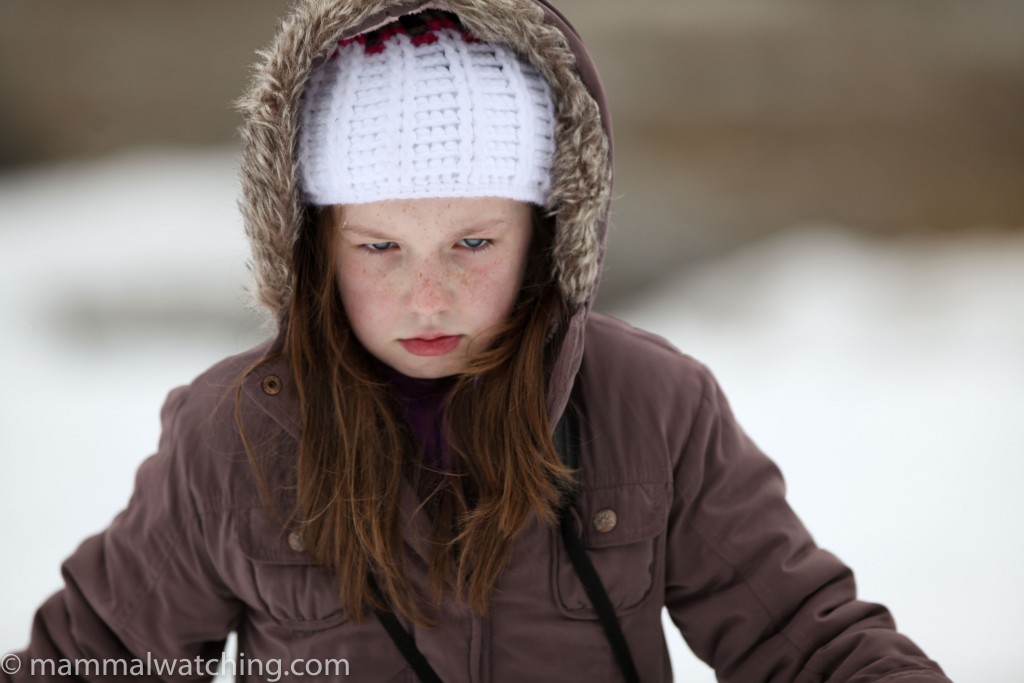 And I had gotten no closer to a Fisher.The species is making something of a comeback in the east of the USA, and is frequently reported in Connecticut and around Albany for example. I had even seen film of one taken by a cop in the Bronx just a few miles from where I live. But despite the comeback they remain a  very difficult species to run into in the wild. So when I got an alert from Algonquin Provincial Park announcing that animals had been feeding on a Moose carcass in front of the visitor centre it was hard to pull myself away from the webcam and the photos on their Facebook page.

I’ve been to Algonquin a couple of times to look for the park’s “Eastern” Wolves, which may or may not be a different species to the larger Grey Wolves that occur elsewhere in Canada. Biologists are divided over the status of this species but the last I heard was that they probably are a different species (Canis lycaon). I saw one here in 2015. 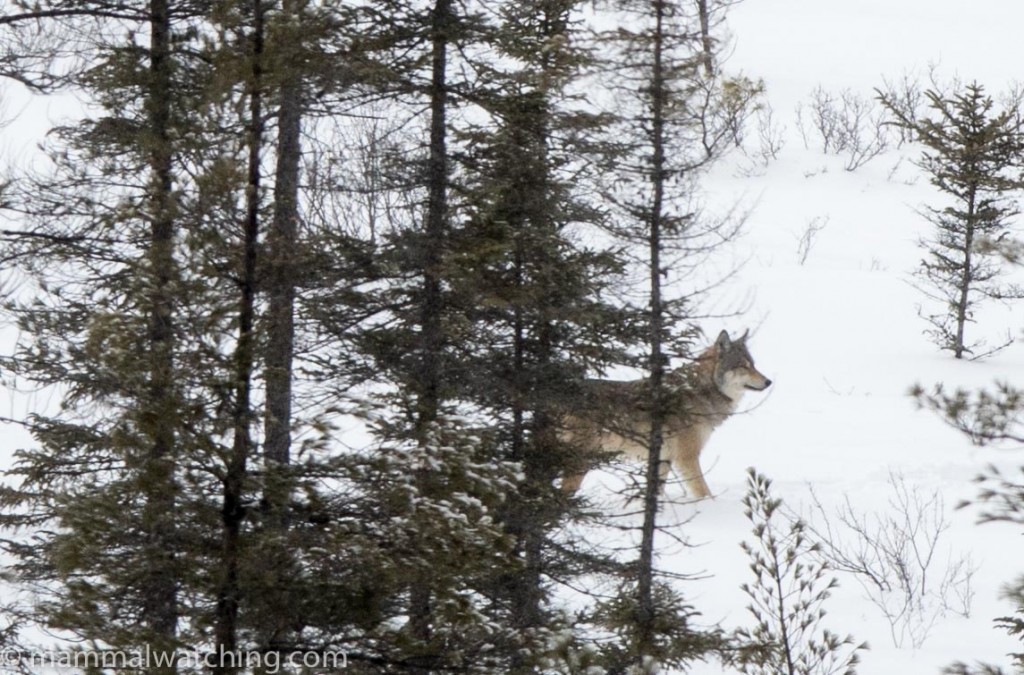 In winter time the park regularly places road-killed deer and Moose in front of the visitor centre – and a webcam – so that people can enjoy watching the carnivores that come into scavenge.

The view of the Moose carcass

Watching the webcam feed of Fishers, Eastern Wolves and Red Foxes was torment so, powerless to resist, I hopped on a flight to Toronto for a 24 hour Fisher twitch. Thankfully mammal twitches are few and far between and I guess this is only the third I time I’ve travelled at very short notice to look for a mammal that is generally hard to see (the other times were for a Southern Elephant Seal in Australia 15 years ago, and Northern Right Whale Dolphins in California last year). I say “thankfully” because these trips are addictive and if mammals flew around the place like birds I reckon I could kiss goodbye to the prospect of maintaining a job or any personal relationships.

Fiona Reid, who lives near Ontario, put me up for the night and came along for the three hour drive to Algonquin. The Moose carcass is a few hundred metres in front of the visitor centre but you can only see it from the deck, so there is no point in getting to the park before the centre opens at 9a.m, and we were the first people there. We had watched the webcam on my phone on the drive into the park and had seen a Fisher feeding on the carcass at 7.30 a.m. But was this good news, because the animal was still around, or bad news because it might already have fed for the day?  I decided I would have been stressed whatever I had seen on the webcam and gave up thinking about it.

The first mammals of the day were the many Red Squirrels running around the bird feeders. 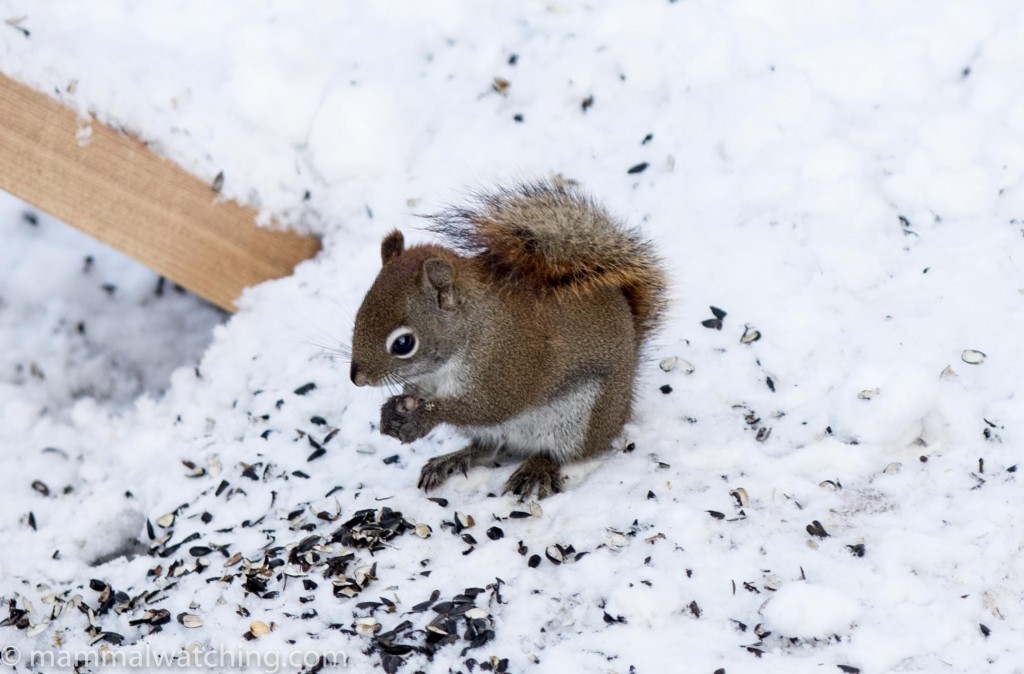 At 11 a.m. someone spotted a Fisher moving through the trees a couple of hundred metres in front of the viewing deck and heading towards the carcass.  I didn’t even pick up my camera for the first couple of minutes preferring to watch the beast moving through the snow and trees, thinking I could get better photos when it was out in the open and eating the carcass. I took one photo of it’s back half  as it moved into some trees. And then the animal disappeared. 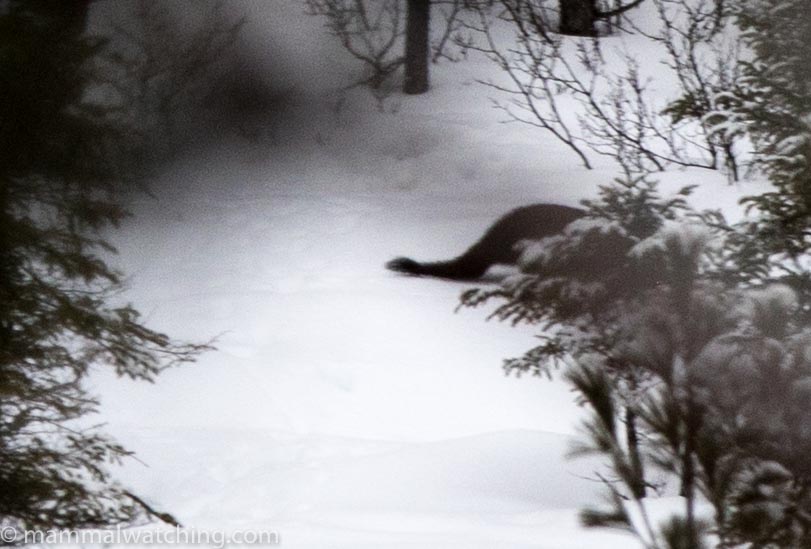 Half a Fisher, Martes pennanti

I was kicking myself not to have taken a more pictures but the sighting was excellent and the Fisher was every bit as beautiful an animal as I had thought it would be, the head and shoulders surprisingly golden.

Just before we were leaving, at 2.30 p.m, Fiona spotted a Fisher – presumably the same animal – in the same area moving away from the carcass. 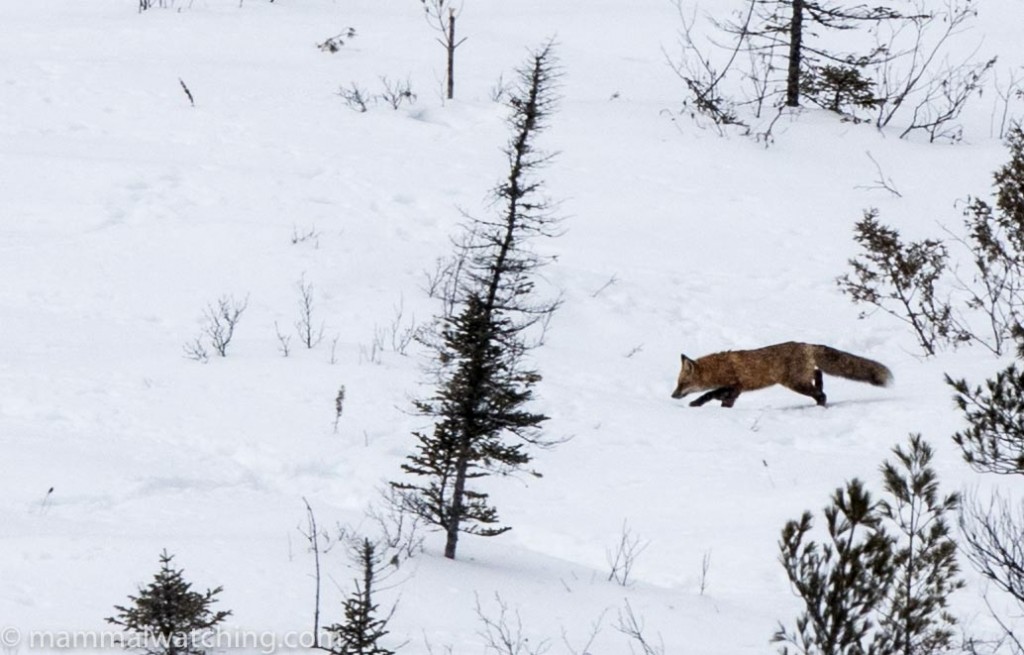 We heard Eastern Wolves howling when we arrived at the centre and they had, we were told, been feeding on the Moose during the night. We saw an animal at 12 p.m. and an hour later watched a couple more sitting out on the ice. But these animals  did not approach the carcass either. In fact the only mammal that did feed on the meat while we were there was a Red Fox that wandered up to the Moose, grabbed a large chunk, and trotted off. 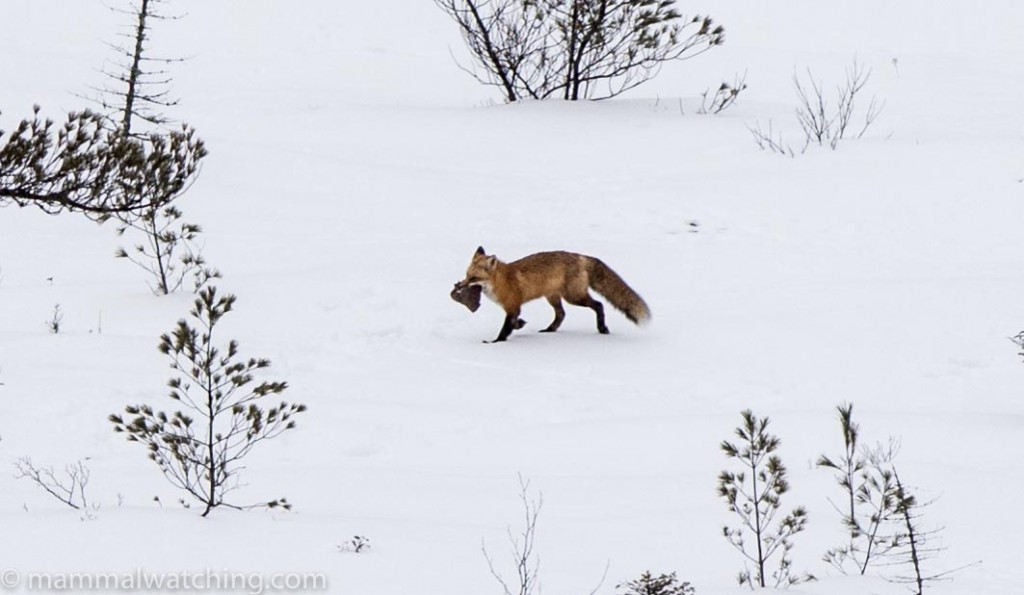 A fun twenty four hours and a very happy diversion from USA politics. 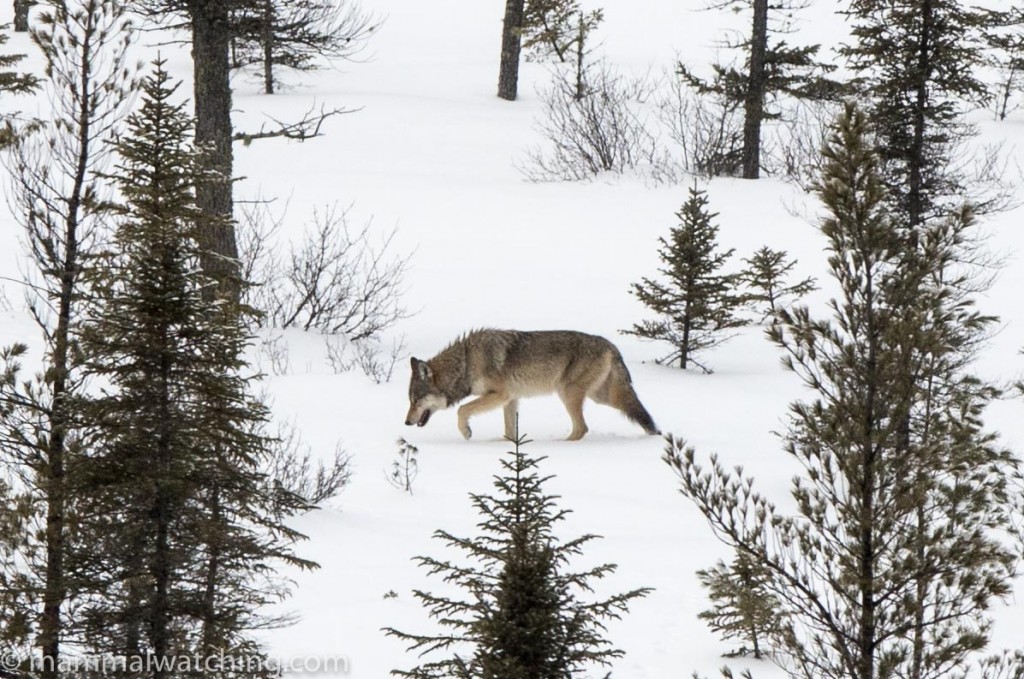