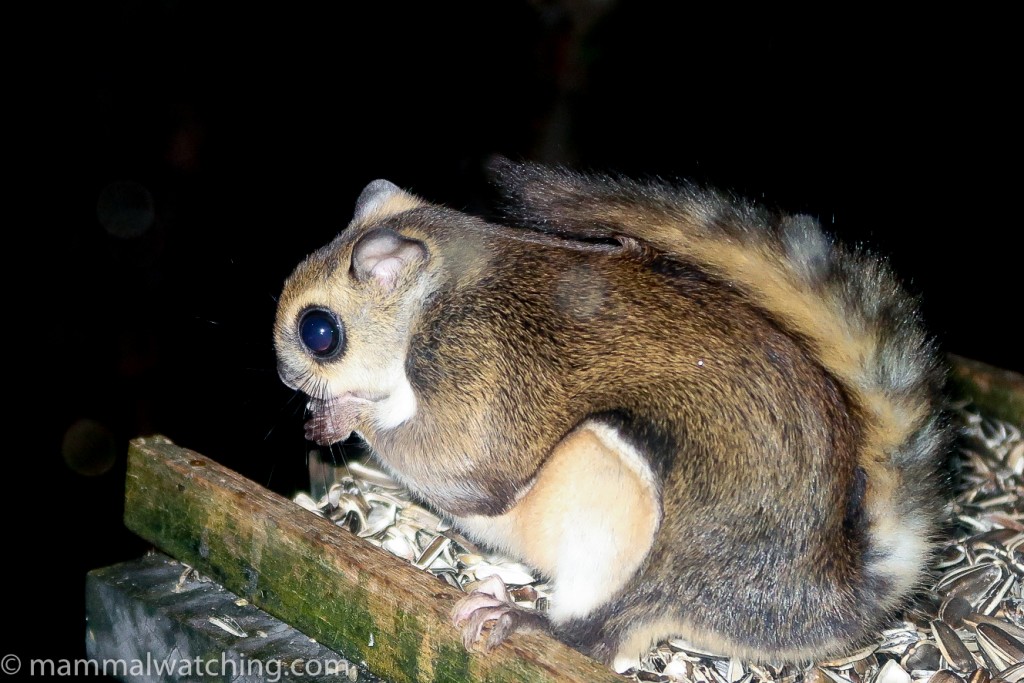 I spent a few days in Japan and Taiwan last month on a family trip. 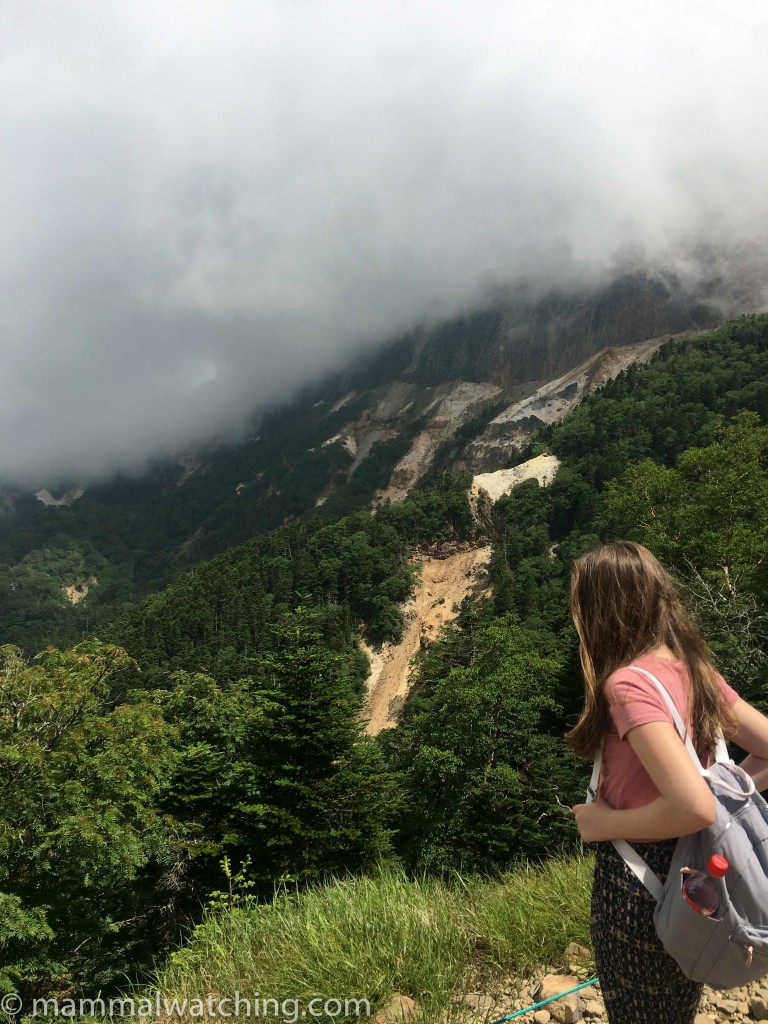 We spent 3 nights in Nagano Prefecture, an area I have visited several times before and most recently in April 2018.

A night in the welcoming Bergcot Guesthouse (details in this report) – I love this place – is always a pleasure and though the hosts were as friendly as ever, and the food as good, I once again did not see the Japanese Badger I was hoping for. Badgers were regular visitors in the summer the first time I came here in 2016 but this summer an animal has only been appearing once every two weeks. The only mammal I saw that came to the feeding station by the house was a Japanese Raccoon Dog and I saw no mammals during an hour long spotlight along the roads nearby.

I then returned to Karuizawa for a night, again in the hope of seeing a Badger. The local nature company – Picchio – are now running night safaris up Mount Yagasakiyama behind the Prince Hotel East. They see Badgers every 10 days or so and it seems there is a den near the buildings on the mountain summit. We weren’t lucky, but my thermal scope helped find four or five Japanese Hares, a lifer for me.  We also saw numerous Sika Deer and a Red Fox. Picchio are a useful source of advice and Takayuki Moshi there – our guide for the night –  speaks very good English and was (and still is) extremely helpful about my many mammalian queries. He told me they are working with Asiatic Black Bears,  have at least one animal collared and might be able to arrange a custom Asiatic Black Bear safari. 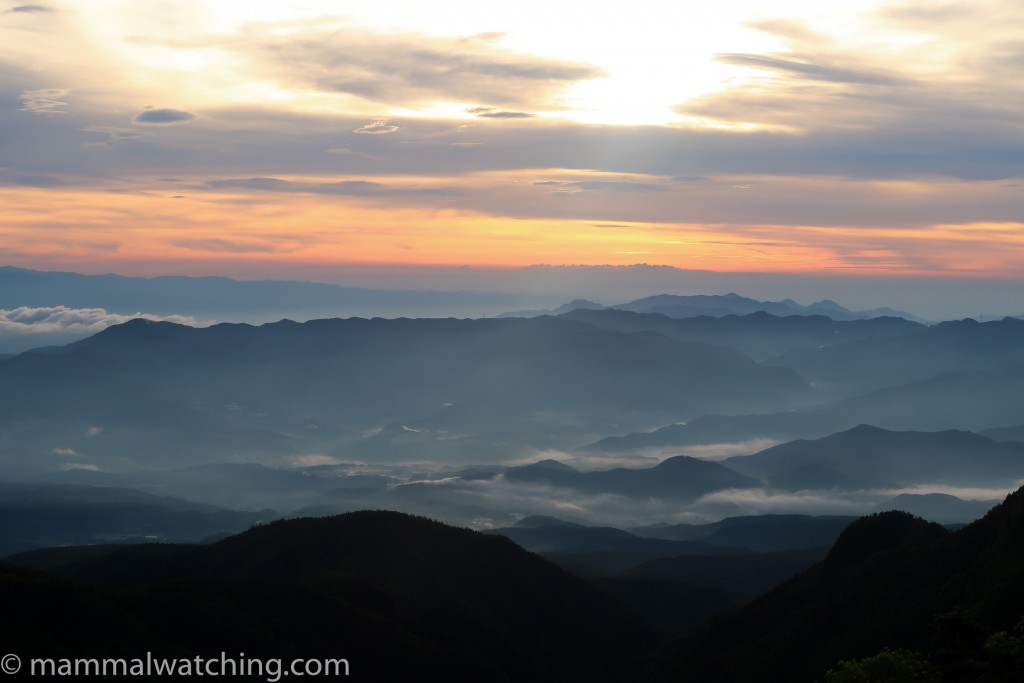 Our last night was on Mount Io, near Chino, in a mountain cabin called Yamabiko Sou. Dominique Brugiere had first drawn my attention to this place in his 2016 report, though he had not visited. It is a fabulous place for mammals and was the highlight of the trip.  The only information I could find online was in Japanese so I will give detailed instructions on how to visit. But first the mammals. 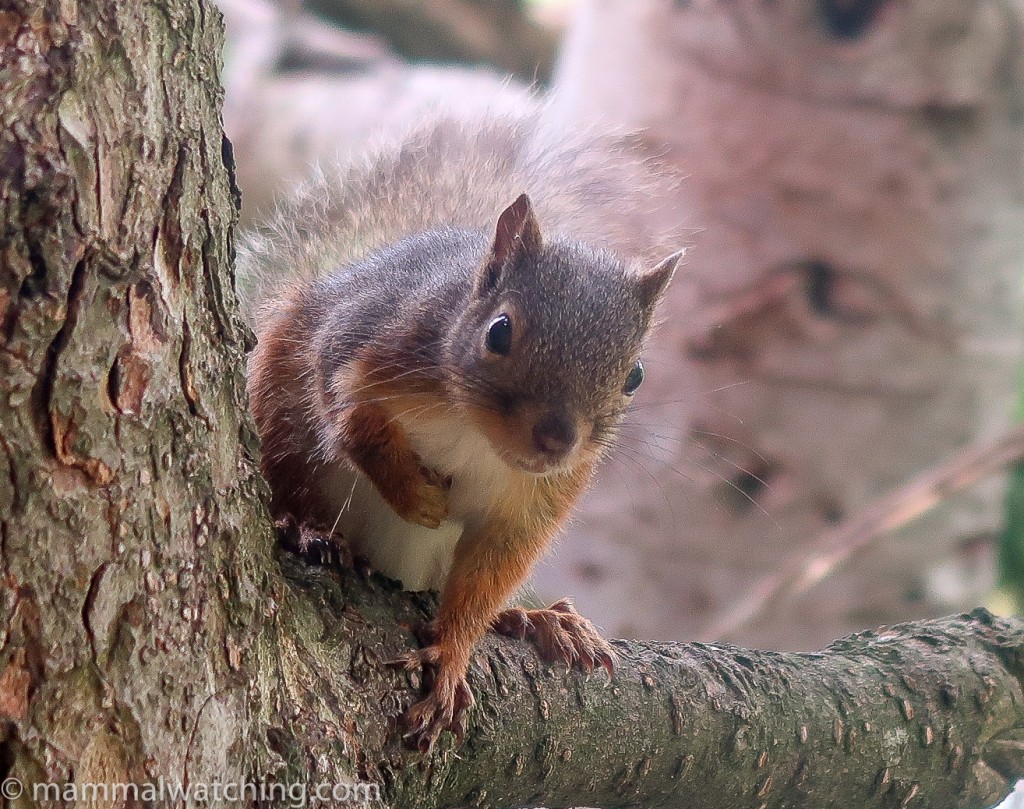 I came here primarily to see Dwarf Japanese Flying Squirrels (Momonga) and Japanese Domice (Yamane) which, if the website was to be believed, are regular visitors in the summer. 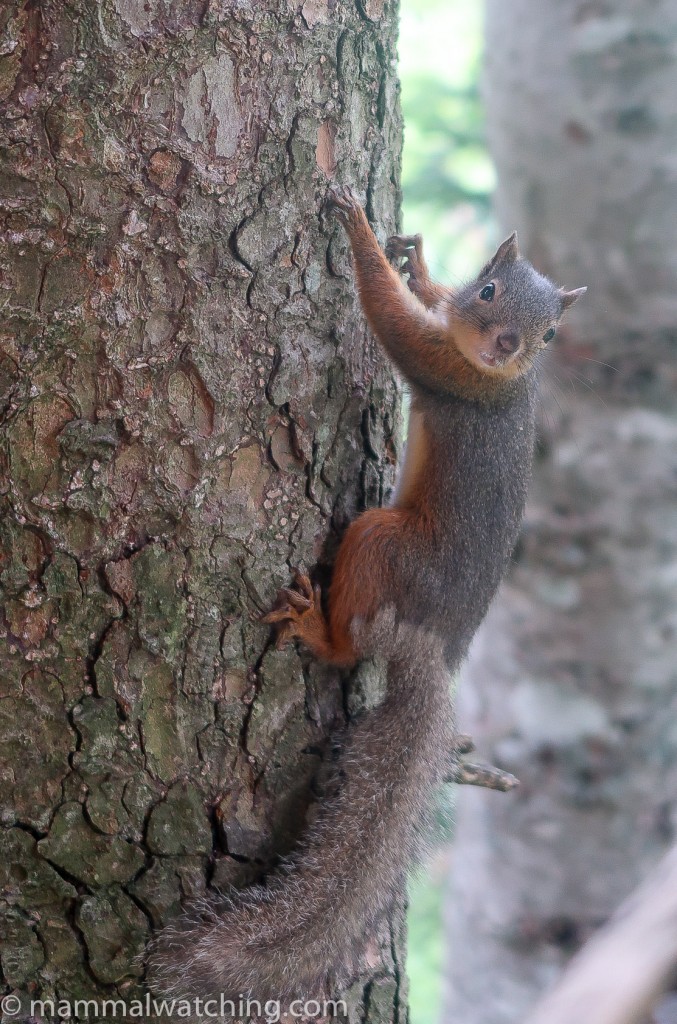 Soon after Katy spotted an animal scuttling in and out of the woodpile inside the cabin. A vole – and so far as I can tell – a Japanese Grass Vole, rather than one of the two red-backed possibilities here  The Red-backed voles can be similarly coloured but both seem to have longer tails relative to the head-body, especially Anderson’s Red-backed Vole. The animal I saw had a tail less than 30% of it head-body length. That said Smith’s Red-backed Vole can be very hard to tell apart from Japanese Grass Vole so I’m taking an educated guess, though either would be a lifer for me. 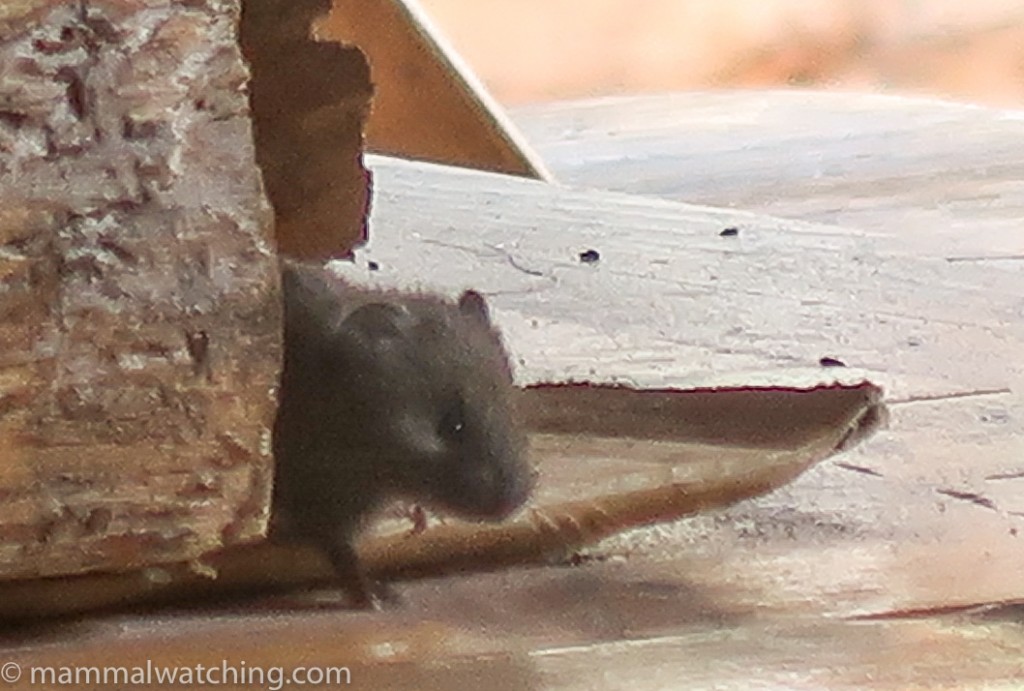 The guy working in the cabin spoke a little English. He told me that the Momonga visited every night in the summer but the Yamane were rare: he had only seen them twice. He also couldn’t do enough to help us. I know this is par for the course in Japan but it takes a lot of getting used to coming from New York.

At 7 p.m, an hour before sunset, I heard a lot of scuttling in the roof. I looked up and out of the window to the right of the rear (feeding station) window and watched numerous bats emerging from a crack in the eaves above me. Largish, with a pale belly and distinctive ears I am pretty confident these were Asian Parti-coloured Bats though I wish I had managed to take some photos. While the bats were emerging a small mammal popped out from the crack and scurried around the roof: a Japanese Dormouse. These guys move fast as you can see in this brief video. 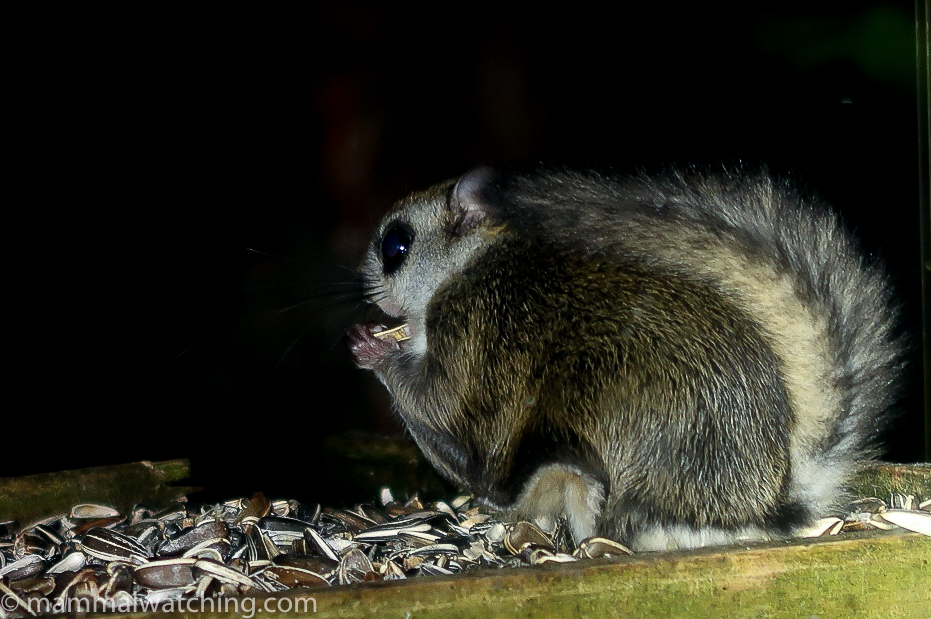 It was dark by 8 p.m. and a Dwarf Flying Squirrel arrived the first time I checked the seed tray.. It fed on and off for over an hour, not too worried by the camera flashes on the other side of the glass. The night before four animals had been feeding together but I saw no more than one animal at a time.

At 9.30 p.m. a Japanese Marten landed with a thud on the feeding station and ate some seeds. And that was the end of the flying squirrel show: perhaps they were frightened off. 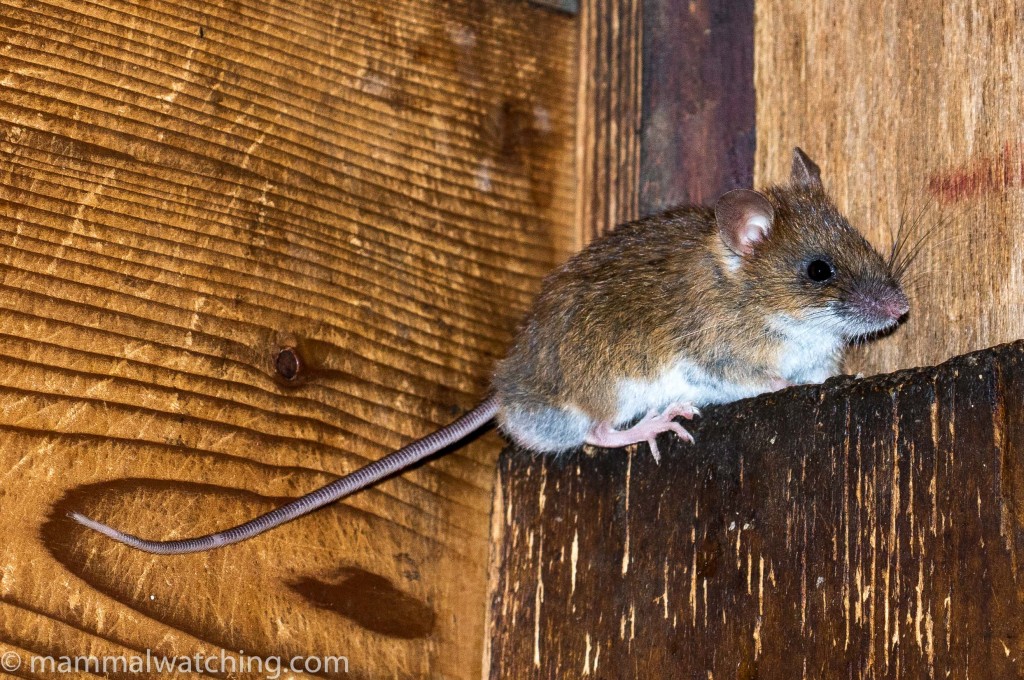 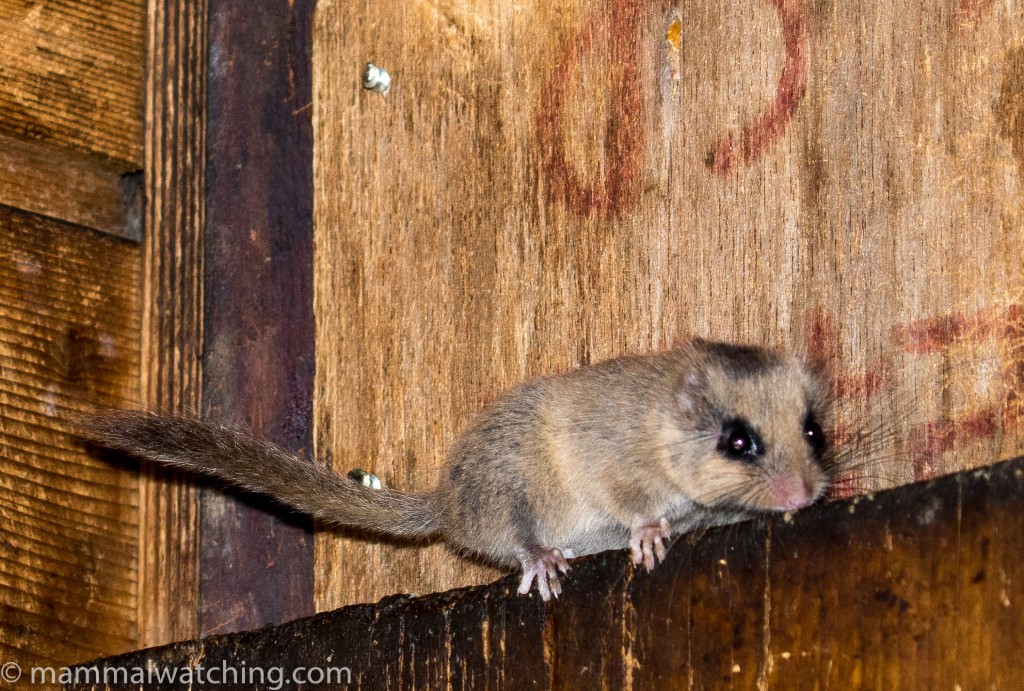 They are really great little beasts. 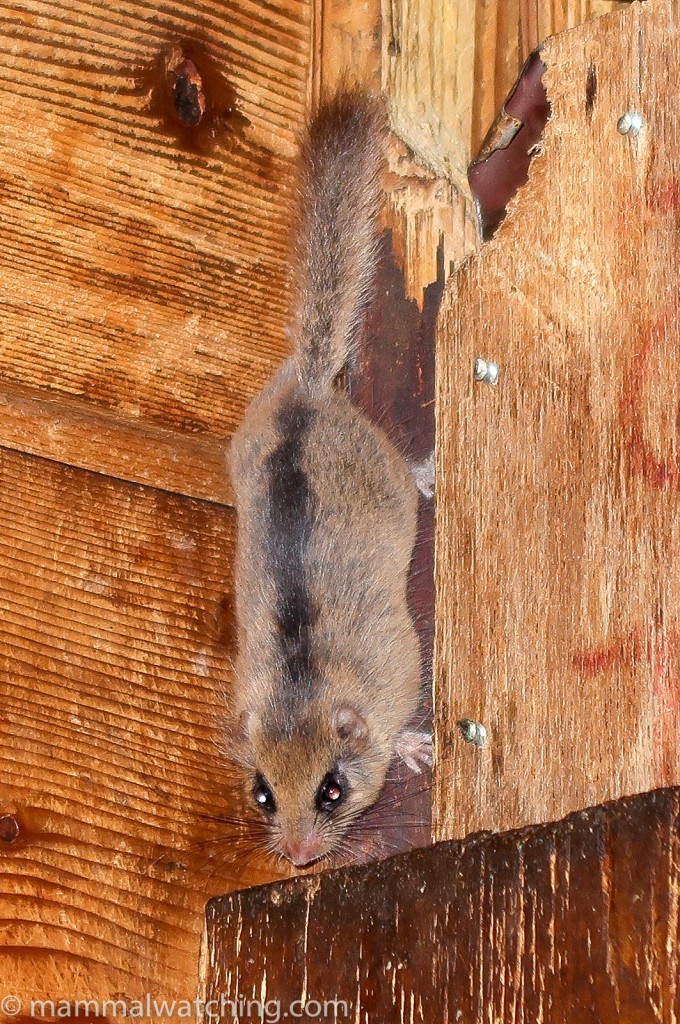 Just a fabulous place that gave me four lifers in nine hours! 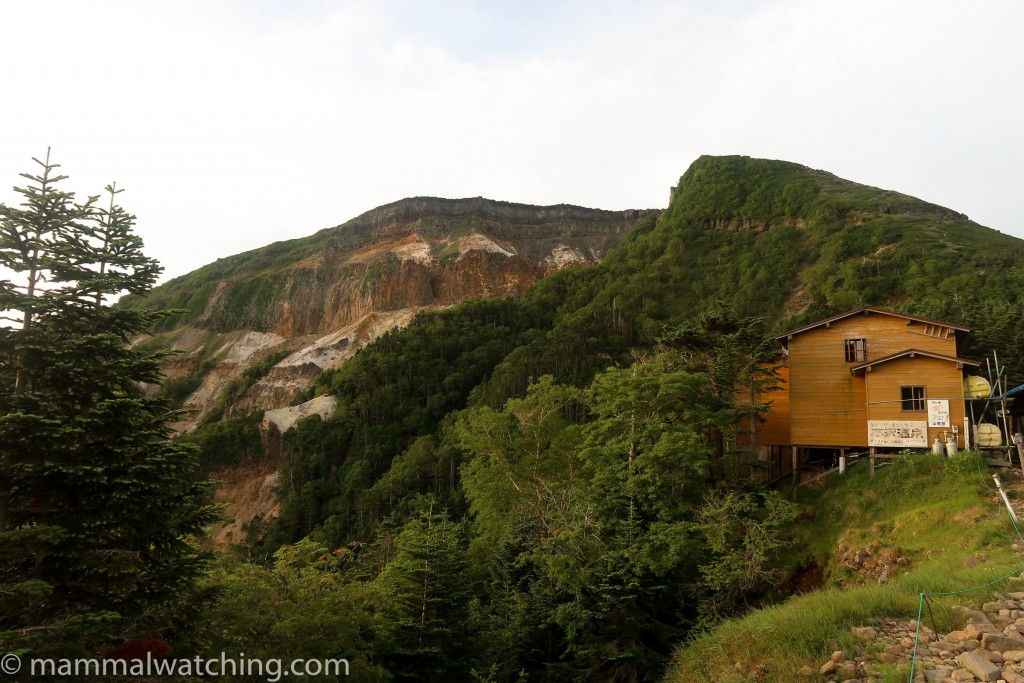 Getting to Yamabiko Sou is pretty easy, once you can navigate the language barrier. They don’t have an email address so a Japanese friend of mine was kind enough to call them – several times in the end – to book us spaces for the night. The number is +81 (0)90 5446 1205. The place must sleep 20+ people but we were told they were full on the Saturday night I originally wanted to say. This is possible but it is also possible they thought I wanted only to have a private stay as there were no people booked to stay the following night when we were there (though two walk-in hikers arrived in the afternoon). It costs 7500 yen per person to stay and that includes a tasty dinner and breakfast.

There are several ways to reach the cabin. We opted for the shortest walk and drove a rough – but 2WD-able road – to the Sakurataira parking area. I had hired an SUV (expensive in Japan) specifically to get to this spot but would have hired a 2wd had I known the road was OK. There were 50+ cars here: the area is very popular with hikers.

From the parking it is a 90 minute walk (or 2 hours if you have Katy with you announcing, every three minutes, that her legs were “literally going to break off”).  The trail starts at an altitude of 1800 metres and the cabin is at 2400 m. Despite the record-breaking lethal heatwave in Tokyo the temperature was very pleasant. 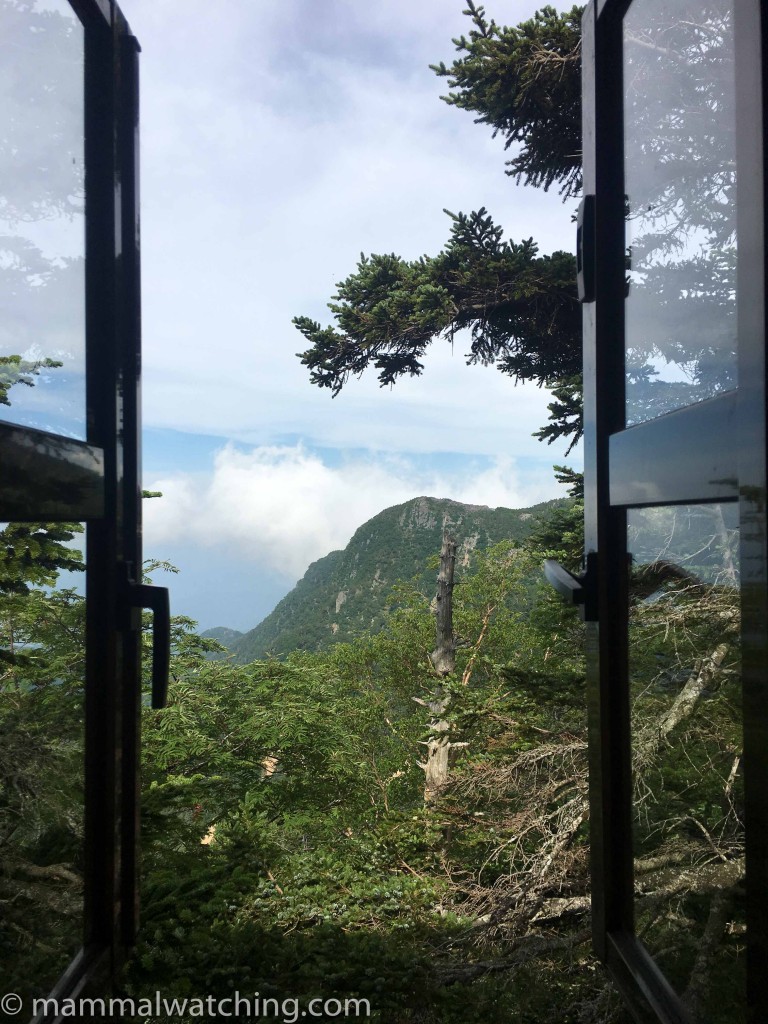 There is only one trail most of the way and it is easy to follow. About 30 minutes from the parking you reach the first hut. And in another 50 minutes you arrive at the Oren Hut. The trail splits here so ask for directions. Twenty minutes later you reach Yamabiko Sou (36.005858, 138.364809). All the huts sell food and drink.  It would – I imagine – be quite straightforward to stay for the squirrels and hike back to the car park after dark. There are Asiatic Black Bears around though and many of the hikers on the trails were wearing bells.  I don’t know the chances of bumping into them (and didn’t ask as it would have given my daughter yet another reason to complain). Seeing a Japanese Serow is much more likely.

The Dwarf Flying Squirrels are around from late May and the Japanese Dormice from June. I suspect both are hibernating again by October. The hut closes in November most years I think.  A really great place in beautiful forest and a highlight of my Japanese travels so far. 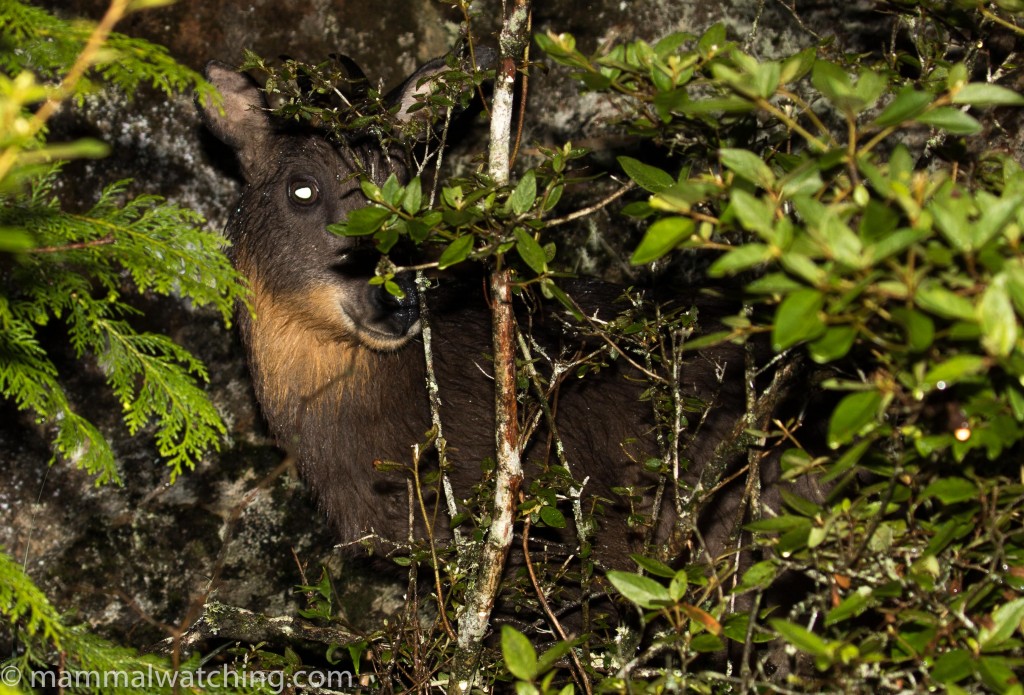 Almost exactly a year ago I was in Taiwan where a typhoon put paid our plans to visit Dasyeushan Forest Reserve. I was keen to return to catch bats and see a Taiwan Serow.

Once again Kuan-Chieh “Chuck” Hung helped me to organise the trip, though this time he wasn’t guiding. I hired a car in Taipei airport and drove a couple of hours south to meet Chao-Lung Hsu, head of the Bat Conservation Society of Taipei, near Taichung City., who we had travelled with in 2017. Once again he had organised permits to catch bats in Dasyeushan Forest, and had three harp traps with him. From Taichung it was another 90 minutes up the mountain to the park gate (only open during the daytime).  The Dasyeushan Visitor Centre and accommodation is a further 20 minutes drive up the hill. 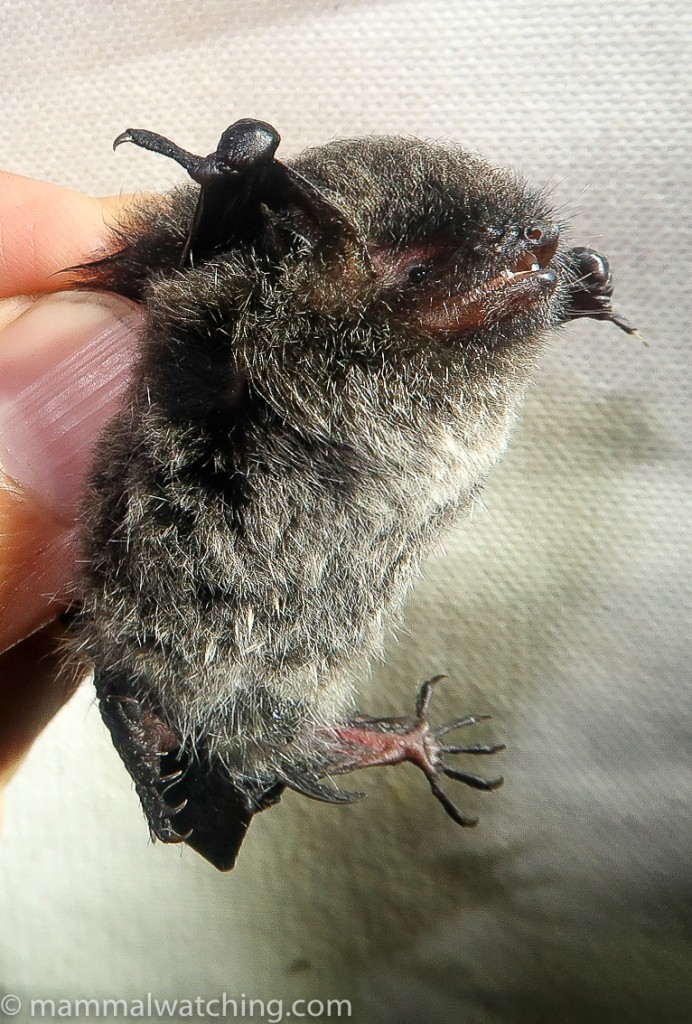 We set three harp traps along a trail, closed to the public, near the park gate. And we trapped for two nights. It is typhoon season in Taiwan, and though we avoided storms, it was pretty wet in the afternoon and early evening both days.

The batting was slow – not unusual in Taiwan it seems –  and we caught five species over the two nights, including several of the endemic Taiwanese Broad-muzzled Myotis and three uncommon Eastern Barbastelles. We had seen caught species on my last trip. 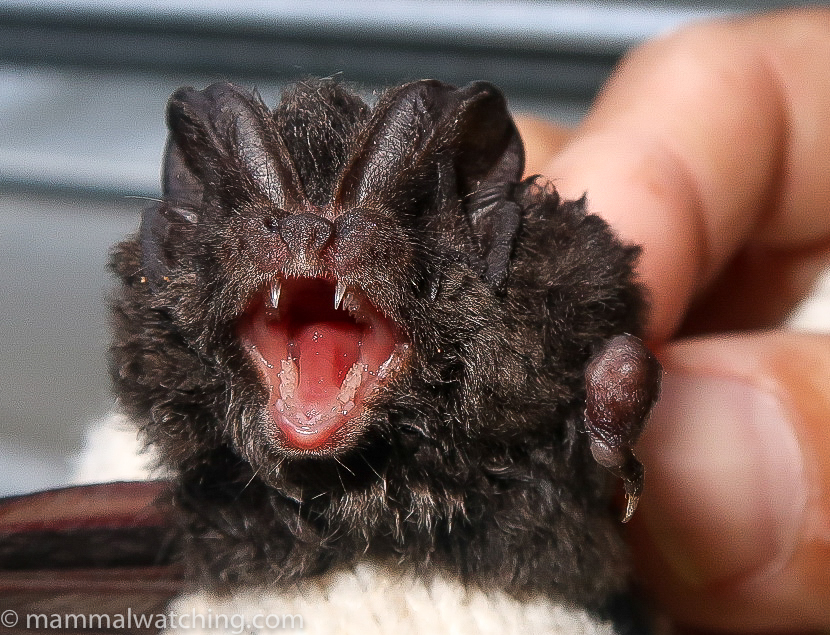 We also caught one Formosan Lesser Horseshoe bat, which some believe is a different species to that found in South East Asia though I will follow the IUCN in lumping them together. This too was a species we had caught a year ago. 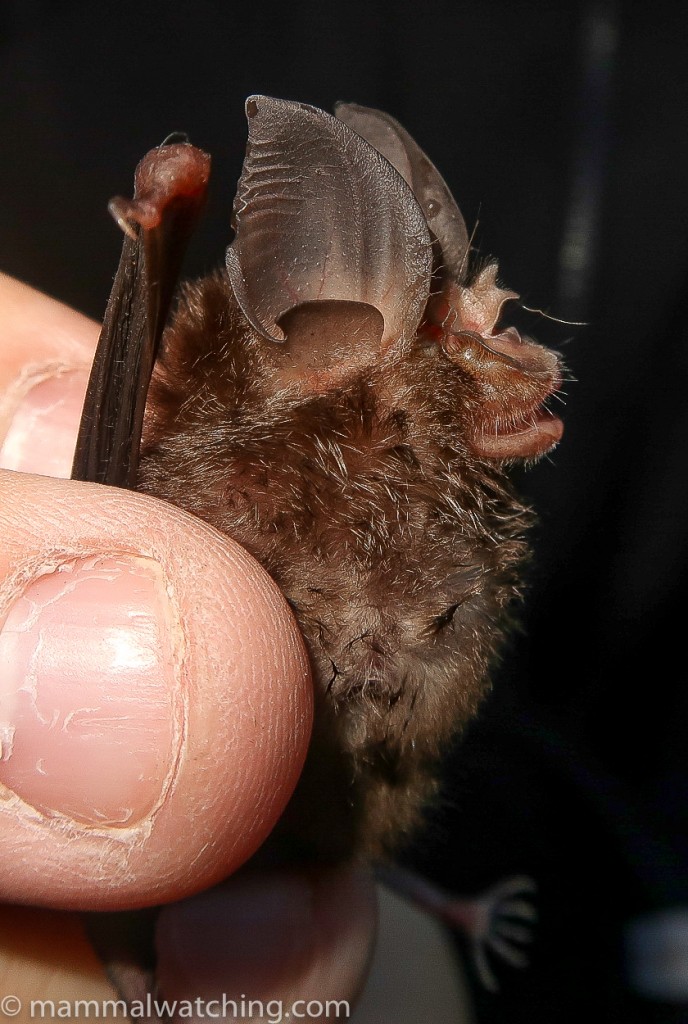 And we caught a couple Eastern Bentwinged Bats.

The chiropteran highlight was undoubtedly my first Taiwanese Long-eared Bat. An endemic and rather rare species: this was the first that Chao-Lung had captured in five years. 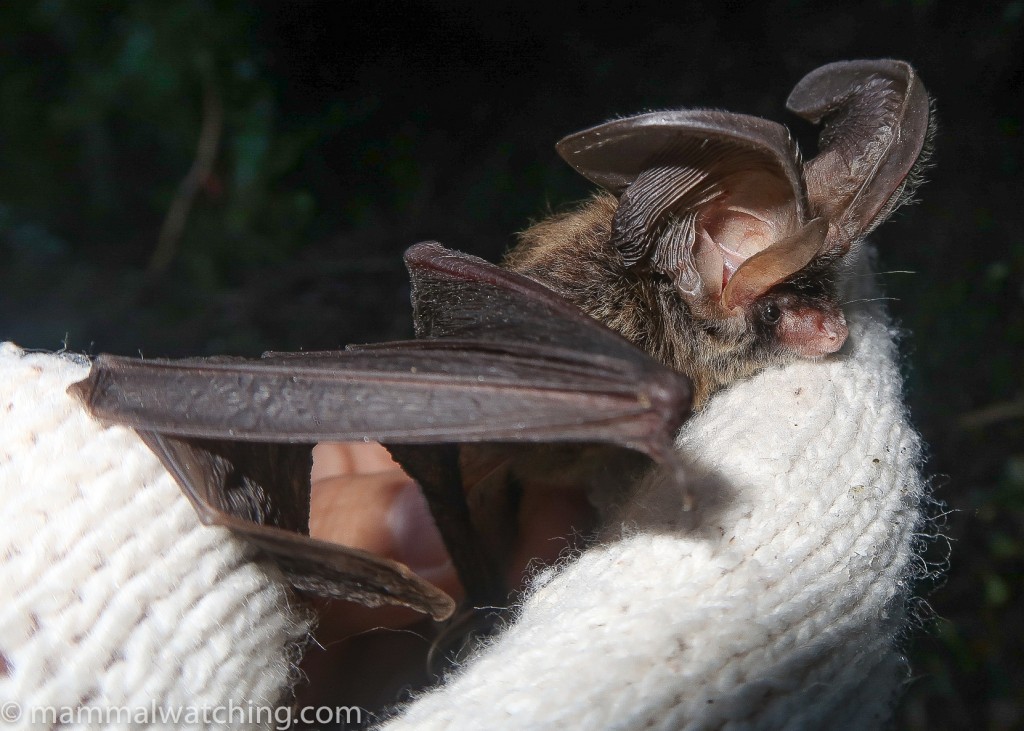 In the early mornings – before the clouds rolled in – the scenery was spectacular. 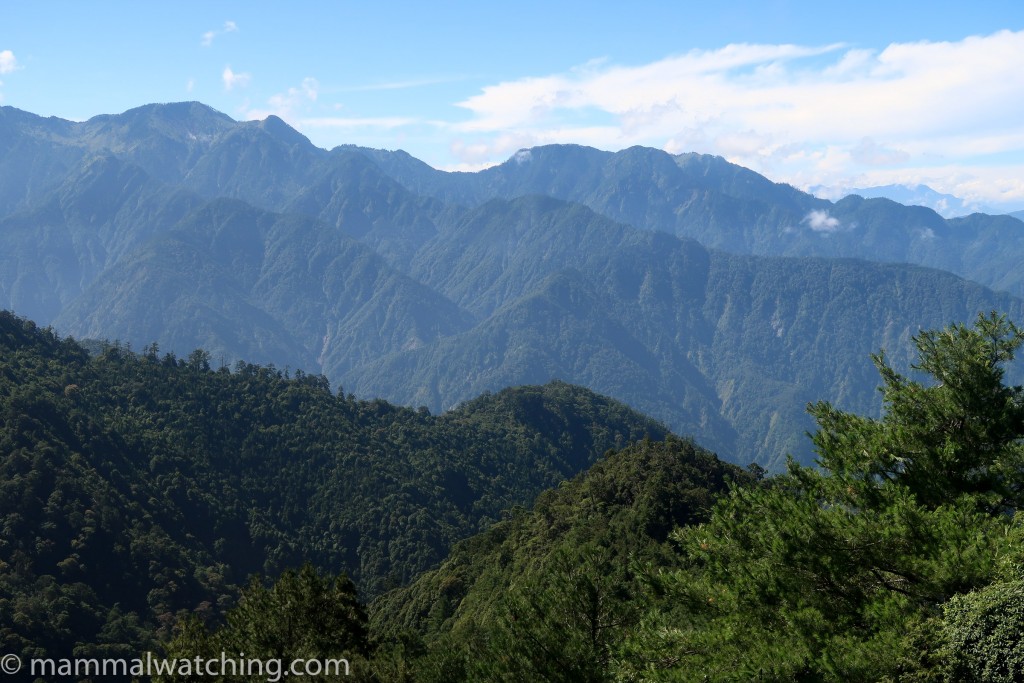 Batting aside, my target species here were the Taiwan Serows. As others have said, they are very easy to see here. I saw at least five in an hour’s spotlighting from 8 p.m on my first night along  three km of road up the mountain from the accommodation (between kilometres 43 and 46). And I saw several more – all at night – between the gate and the lodge during the rest of my stay. Because the park gate is closed at night I was limited to the road above the gate. I didn’t have the patience to take great photos. 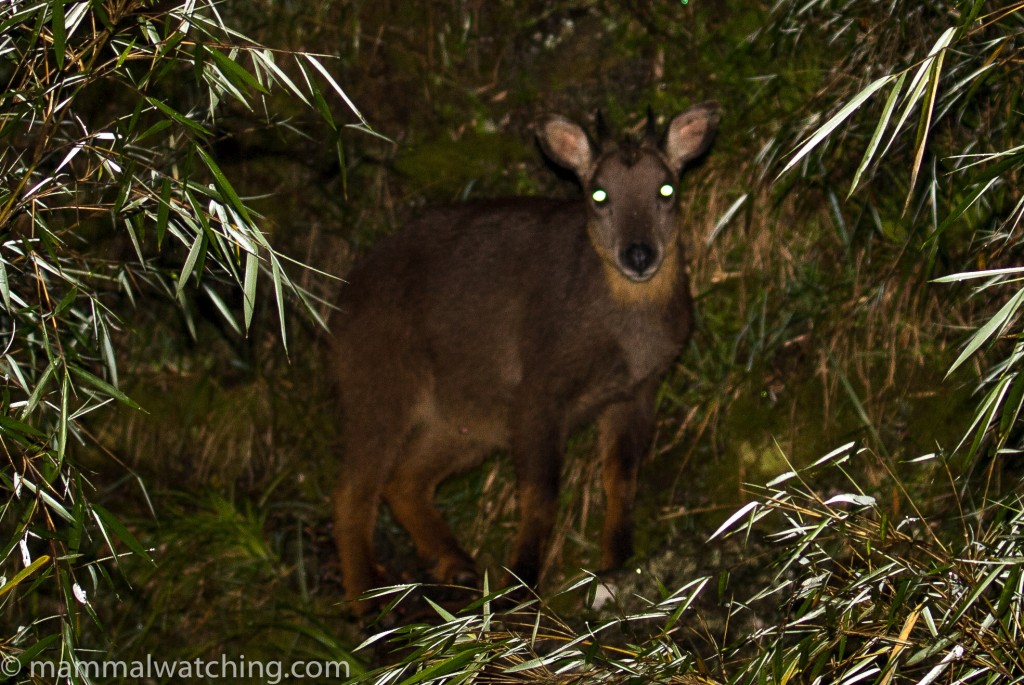 I also spent a few hours with the thermal scope, mainly trying to see a Hairy-footed Flying Squirrel, a small, difficult species to see which Chuck had seen once in Dasyeushan. I couldn’t find one. The search was hindered in part from the abundant Red and White Giant Flying Squirrels (at least ten an hour) that lit up my thermal scope and needed to be checked out. Though I didn’t get tired of looking at these great beasts. 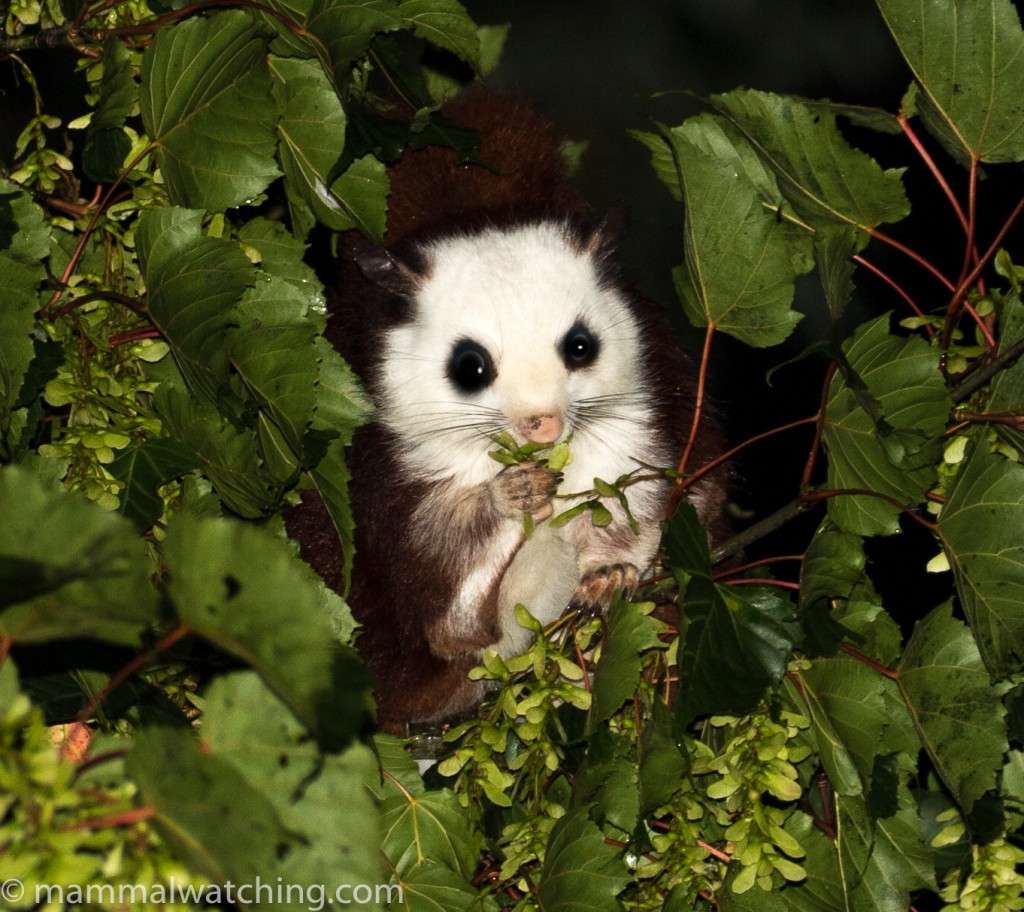 The only other mammals we encountered above the gate were several Reeve’s Muntjaks and a single Masked Palm Civet crossing the road near the gate. Had I put a little effort in I could probably have found some diurnal squirrels. 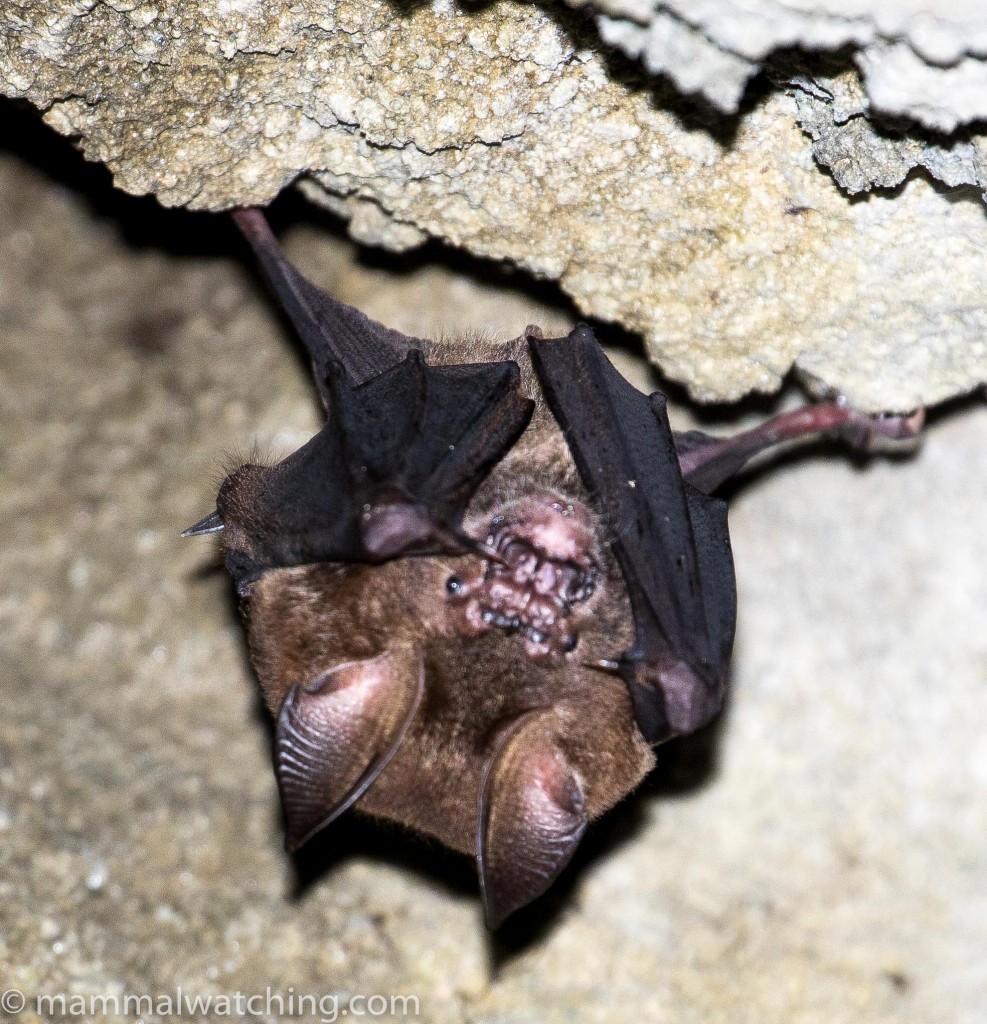 Leaving the park you drive through a short tunnel below the gate (at around km 28.5). Thirty or so Great Roundleaf Bats were roosting at the end of the tunnel (the end furthest from the gate). Chao-Lung thought they were probably males and that they are not always here.

Thanks again to Chao-Lung for all his help and to Chuck for making the arrangements. I still have lots of bats to see in Taiwan so somewhere to return to. 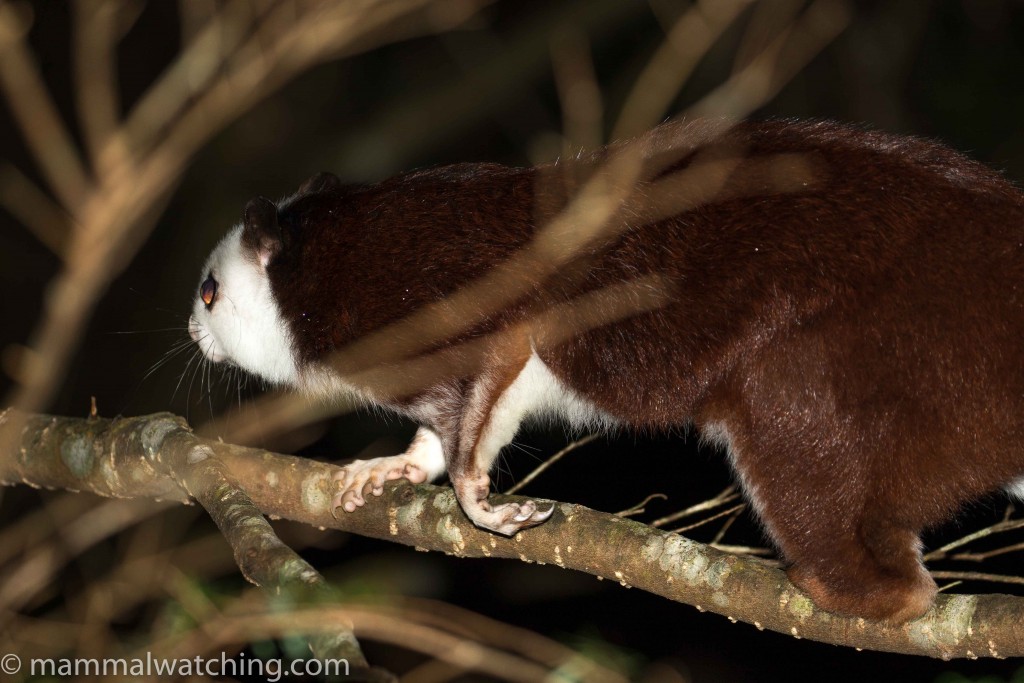