Western Weasels (and a few other things): California and Oregon 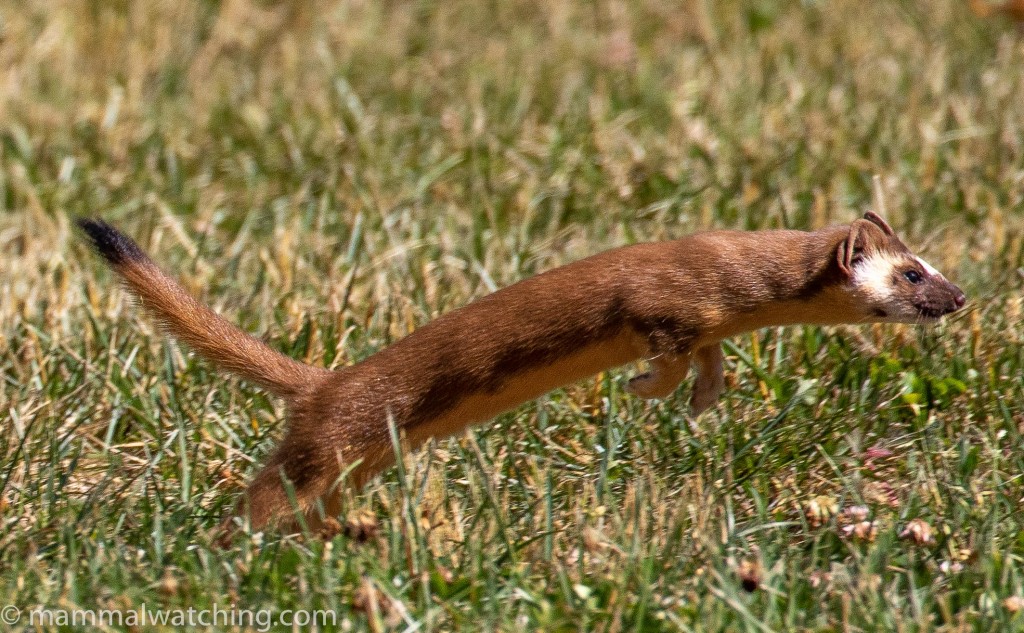 I have been living in the US for eight years and my failure to see a Long-tailed Weasel was becoming the stuff of legend. I spent the first five of these years sure that I was bound to bump into one. And the next three increasingly convinced that I was destined never to see a weasel.

In August 2018, three days before I was leaving for Gabon, I got a message from JoEllen Arnold that Long-tailed Weasels were being regularly seen in a small park in Sonoma County, California. I contemplated jumping on a plane for a day trip but learned the weasels had already moved on. 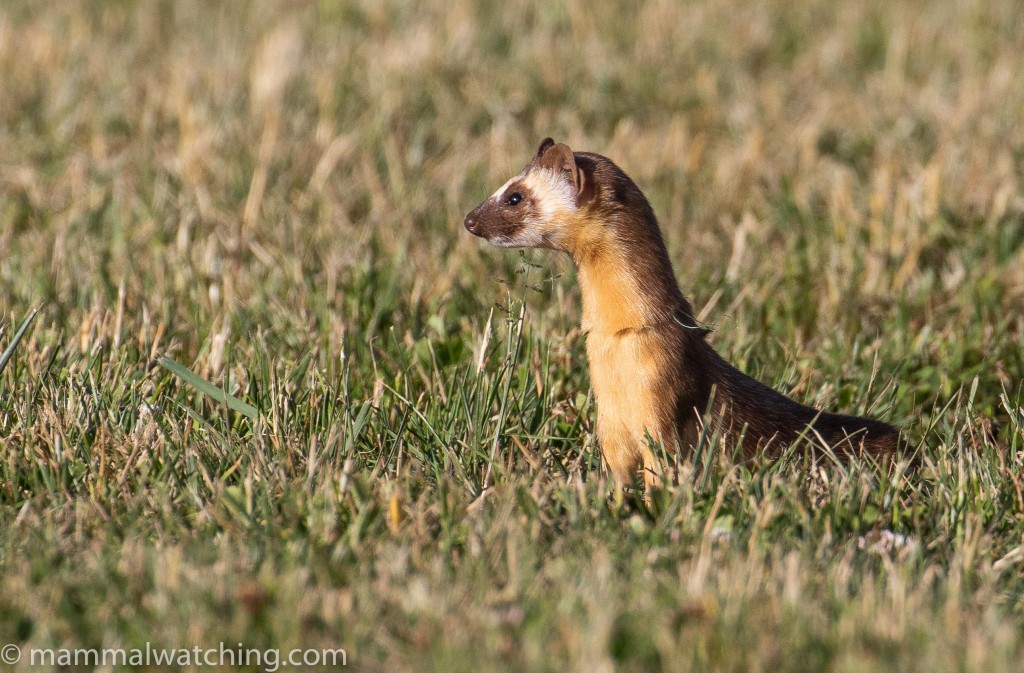 In 2019 they were back and breeding in the same area. But by the time I heard about it they had already left.

I was determined to find them this year but … COVID-19. The good news was that the weasels were back and not being disturbed as much as in earlier years. The bad news was that California was shut. 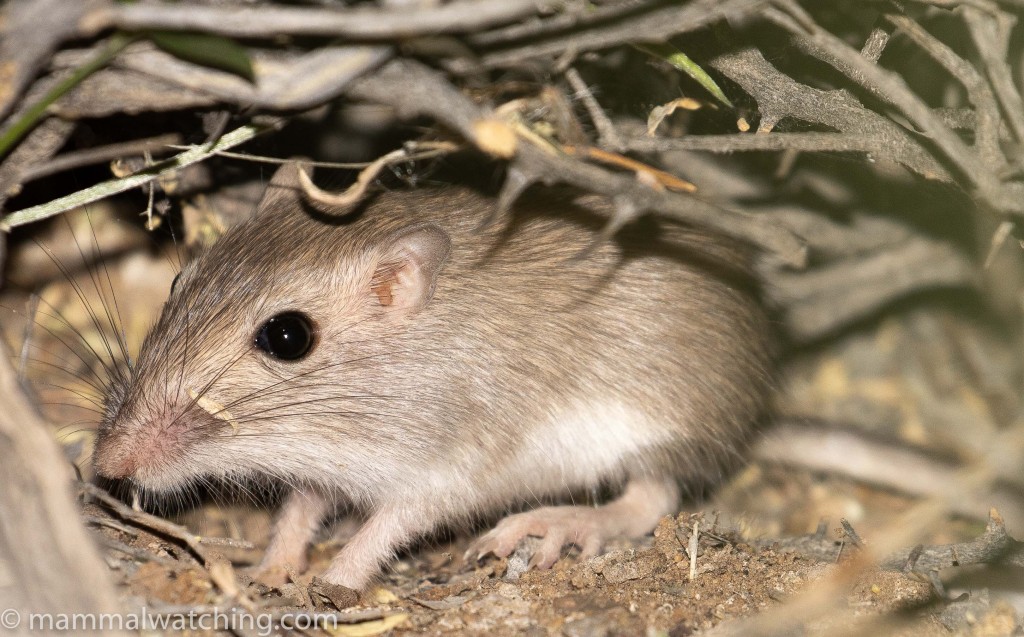 I spent weeks anxiously checking in on the weasels movements and the easing of travel restrictions. Justin Brown wrote to me about the weasels in May, saying he had just seen ten in a few hours and “thought I would want to know” … something of an understatement! This was torture. 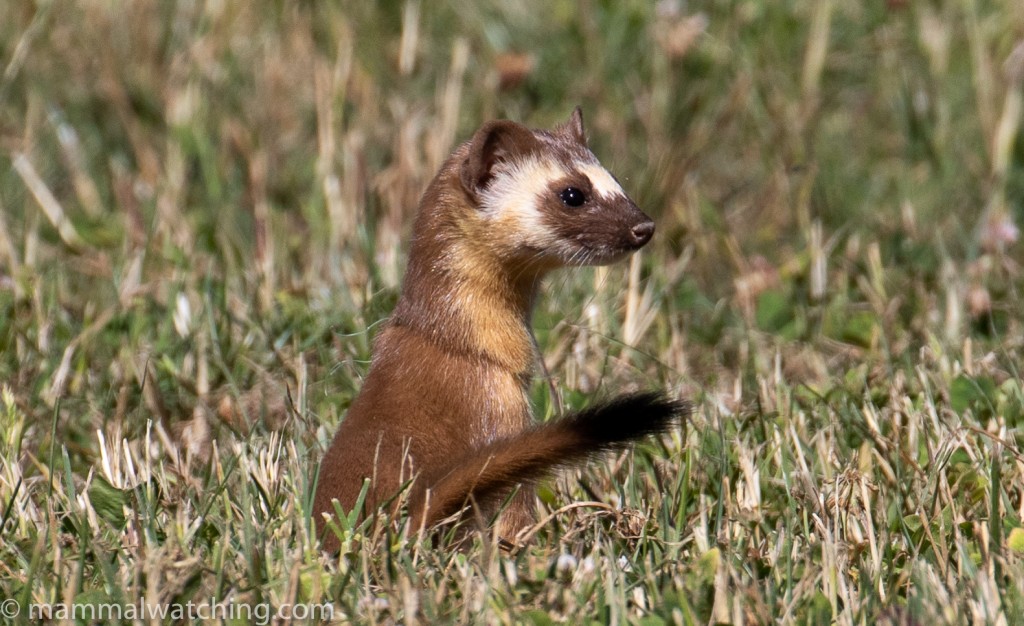 As California started to reopen Venkat Sankar posted pictures of a rodents he had seen around Joshua Tree including a Baja Pocket Mouse. This was the final straw. I was powerless to resist a quick trip out west.

This was a focussed trip, looking for several species that had so far eluded me. I won’t write about commoner stuff I saw on the way.

I was last in Joshua Tree at the end of May 2017 and there were rodents everywhere. I doubt whether it can be as good every year, but in May Venkat Sankar reported that once again there was a rodent explosion around Joshua Tree and he had seen 18 species in two nights (!), including several Baja Pocket Mice.

Almost as good as a lifer pocket mouse was the chance to catch up with Paul Carter, Charles Hood and Jose Gabriel, all of whom were in southern California and keen for some socially distant mammaling.

We spent a night camped out at Red Cloud Wash just south of Joshua Tree, where Venkat saw his pocket mice. He pinpointed the area after researching museum records and likely habitat via google maps. It was an interesting spot but looked forbidding: all black stones and bone dry scrub. 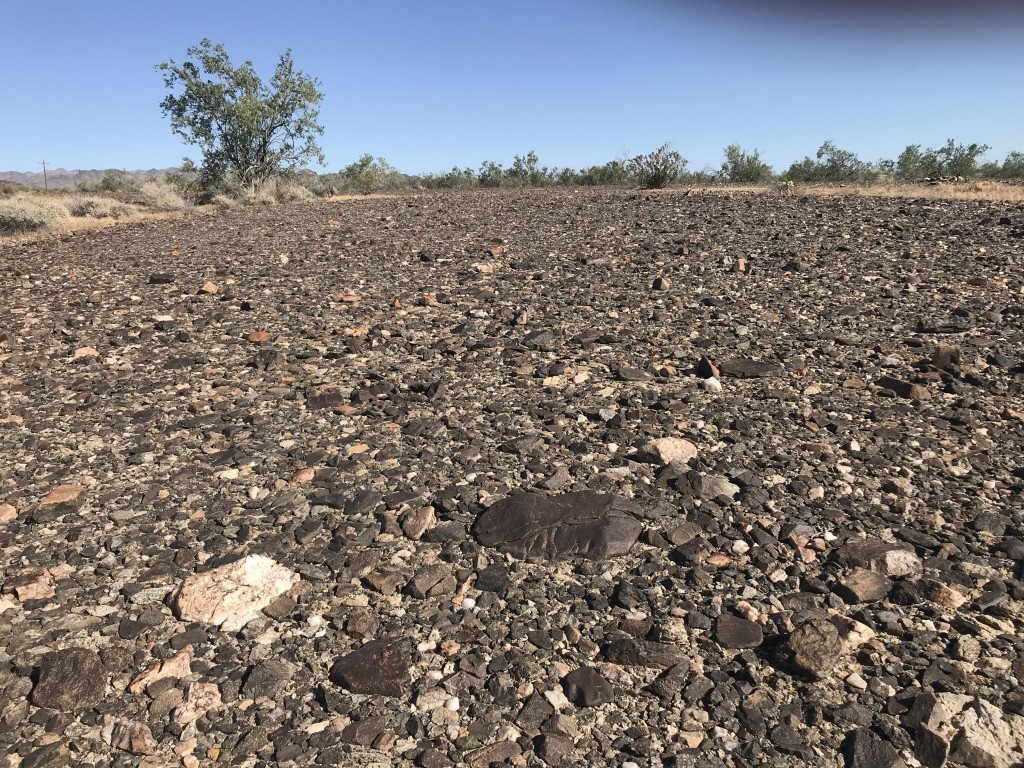 It was hard to believe there would be that much around. Yet as soon as the sun set the rocks were alive with the sound of rodents. As were the thermal scopes. There were small mammals everywhere.

We found our first pocket mice within minutes, and must have seen at least ten. After comparing photos we are sure some were Baja Pocket Mice, and at least one was a Long-tailed Pocket Mouse (probably best differentiated from a distance by the amount of hair on the tail). I wouldn’t like to try to ID many of the others: even with decent photos we found it hard. 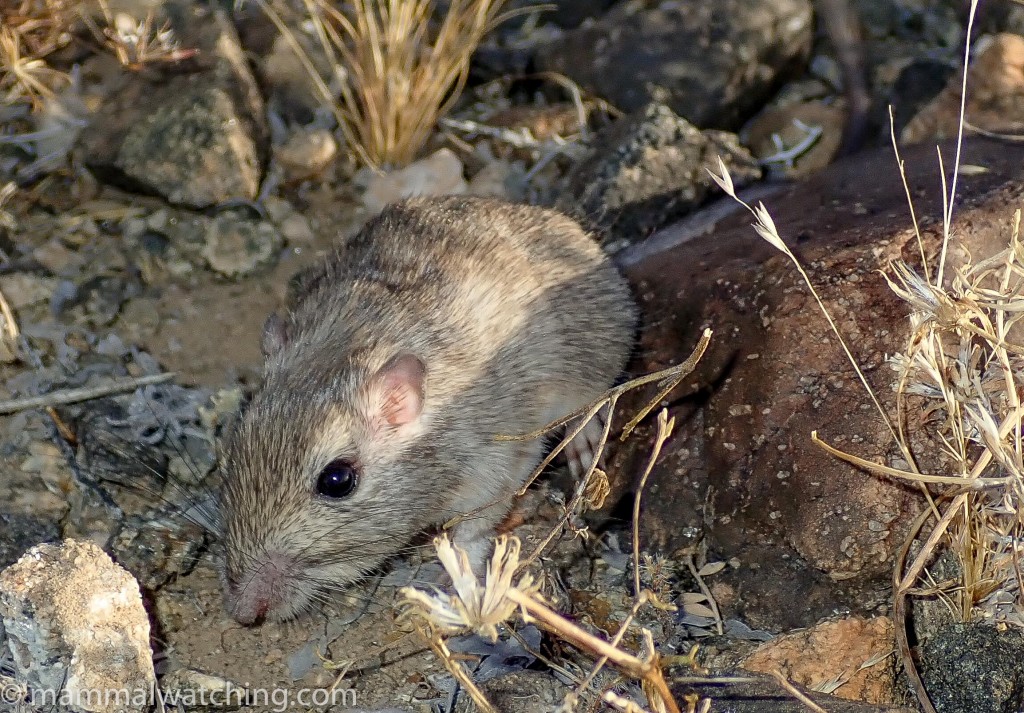 And this is a Long-tailed Pocket Mouse. 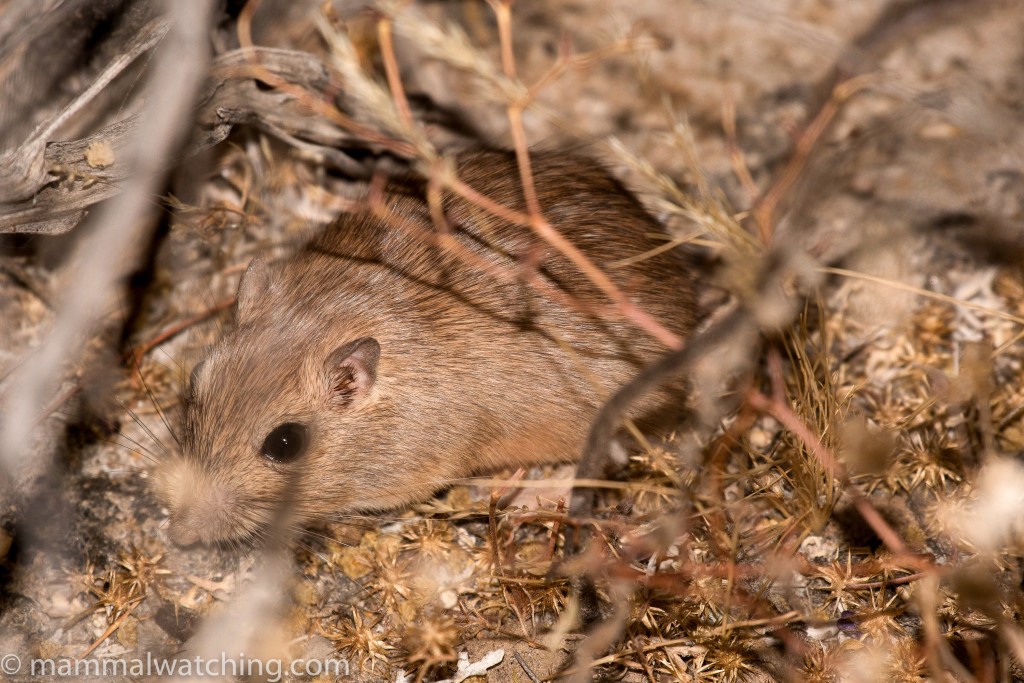 The difference between the tails seems most striking. Baja Pocket Mice have a crest at the end of the tail. 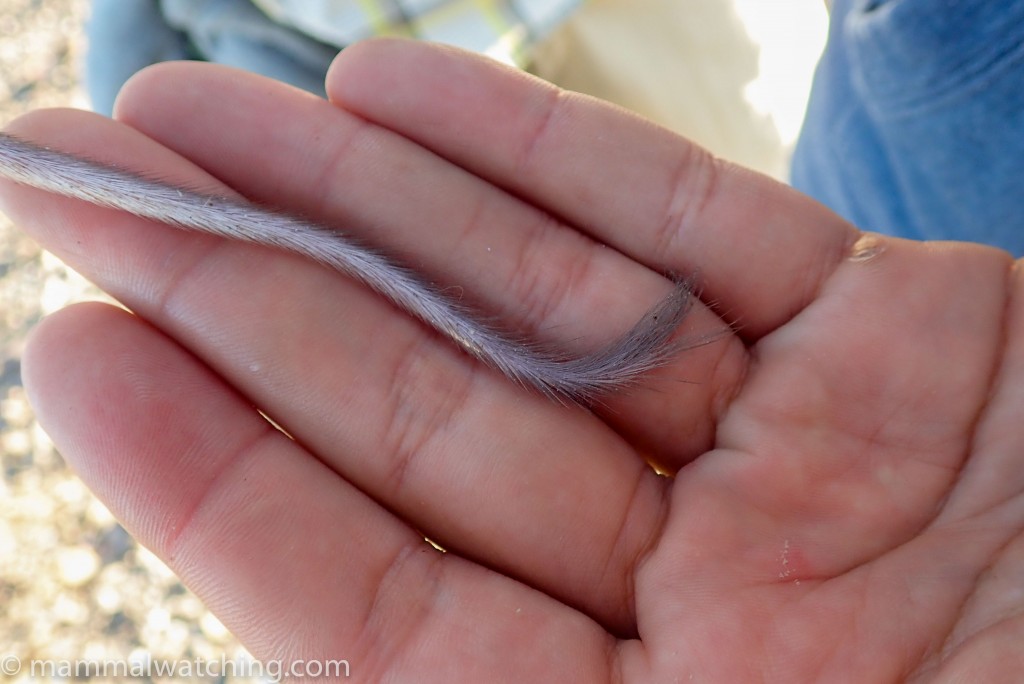 Whereas Long-tailed Pocket Mice have long hairs running along half of the tail. 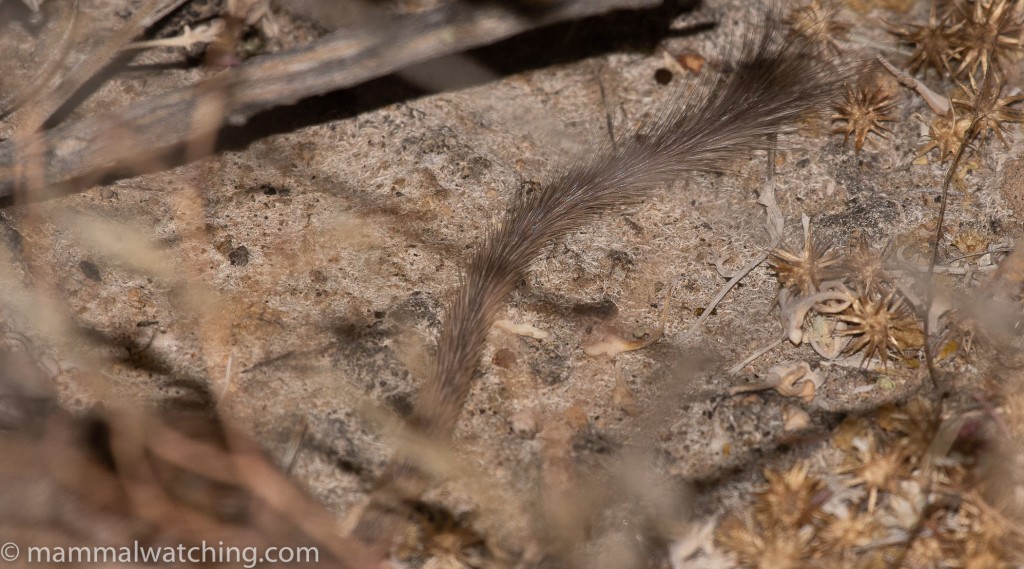 If there were an abundance of pocket mice, then there were a plethora of wood rats. I have previously seen only a few woodrats outside of traps. Here we saw at least 30 in two hours’ spotlighting. 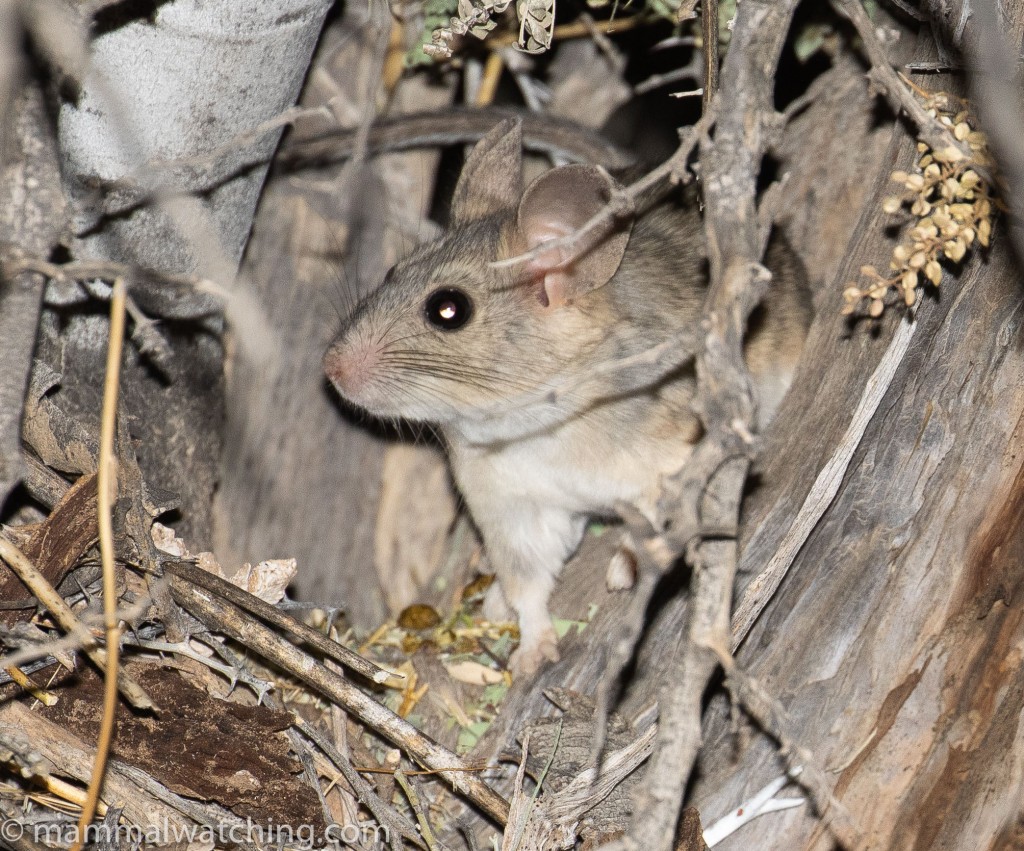 Most appeared to be Desert Woodrats, though some looked to have larger ears (and were generally bigger) and we put these down as White-throated Woodrats (we caught both species the next day). 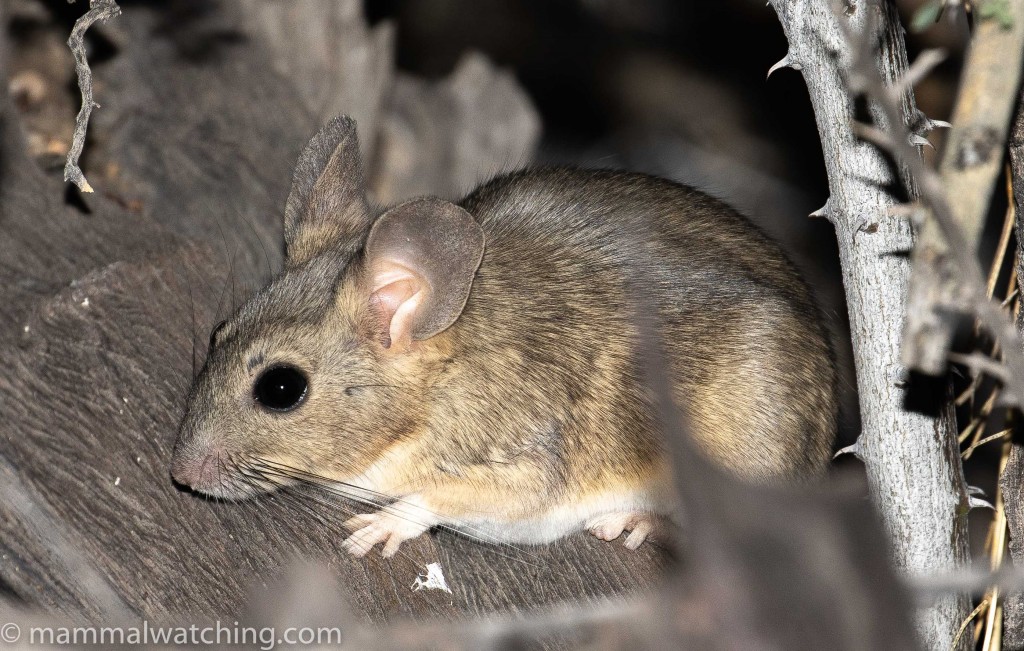 There were a few Kangaroo Rats hopping around too, though we did not catch any in our traps the following morning to ID them properly. Presumably – given the stony ground – they were Merriam’s Kangaroo Rats. 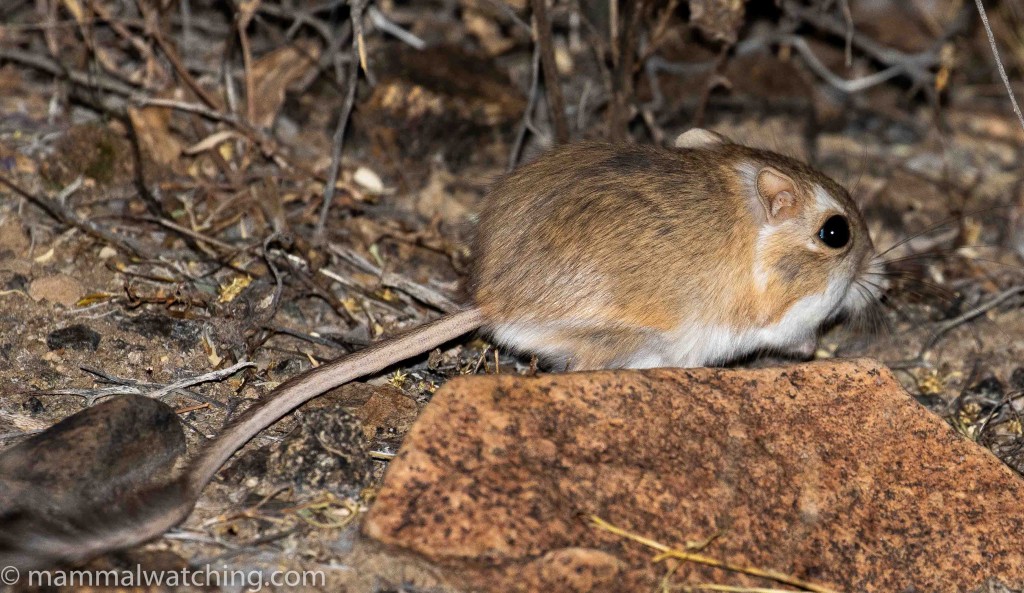 We put out about 50 live traps and caught a bunch of Desert and White-throated Woodrats around larger bushes close to the road, plus one Long-tailed and one Baja Pocket Mouse in traps placed at the bases of bushes scattered over the stony desert. 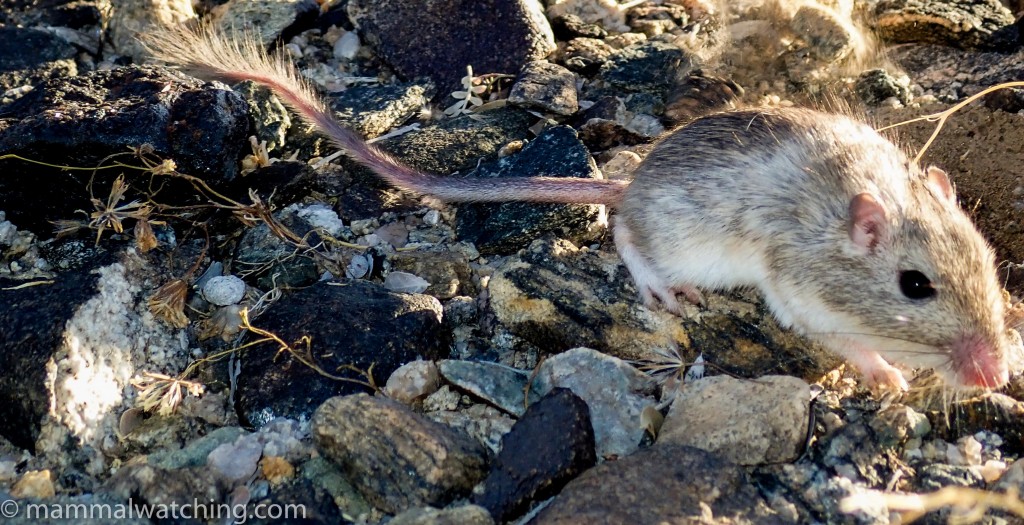 A fun night! Thanks to both Venkat Sankar and Adam Walleyn for researching the area so successfully, and to Charles Hood, Paul Carter and Jose Gabriel for photos, rodents, breakfast and beer.

I returned to Dyer in the beautiful Eastern Sierra to look for Pale Kangaroo Mice which had eluded me in September 2017.

Charles Hood and Jose Gabriel Martinez visited two or three days before me on a kangaroo mouse hunt and saw two in an hour’s spotlighting close to town (around here). When I arrived so did a cold front. There was a full moon, a strong wind and the temperature was near freezing. I was not optimistic that much would be out and about.

I was wrong. There were plenty of small mammals bouncing around and I spent four hours from sunset patrolling – on foot and from the car – the area where Charles had been successful. I saw plenty of Gambel’s Deer Mice, and plenty of kangaroo rats, though did not try to identify any of them to species. But I struggled to get proper looks at several rodents that looked like like potential Pale Kangaroo Mice.

At around 1 am I had prolonged binocular views of a very pale, small, kangaroo-like rodent that’s most striking features were its pale color and pure white tail. I did not though get a clear look at the end of the tail, just a glimpse when it bounced under a bush. And with that glimpse I had the impression there was some black at the end of the tail and my heart sank. But everything else looked good for Pale Kangaroo Mouse and wrong for other species. So I was able to convince myself that the “black crest on the tail tip” I saw was more likely shadow from the spotlight. In any case one for the “Want Better Views” list. This is such a pretty rodent I won’t be truly happy until I see it in the hand. 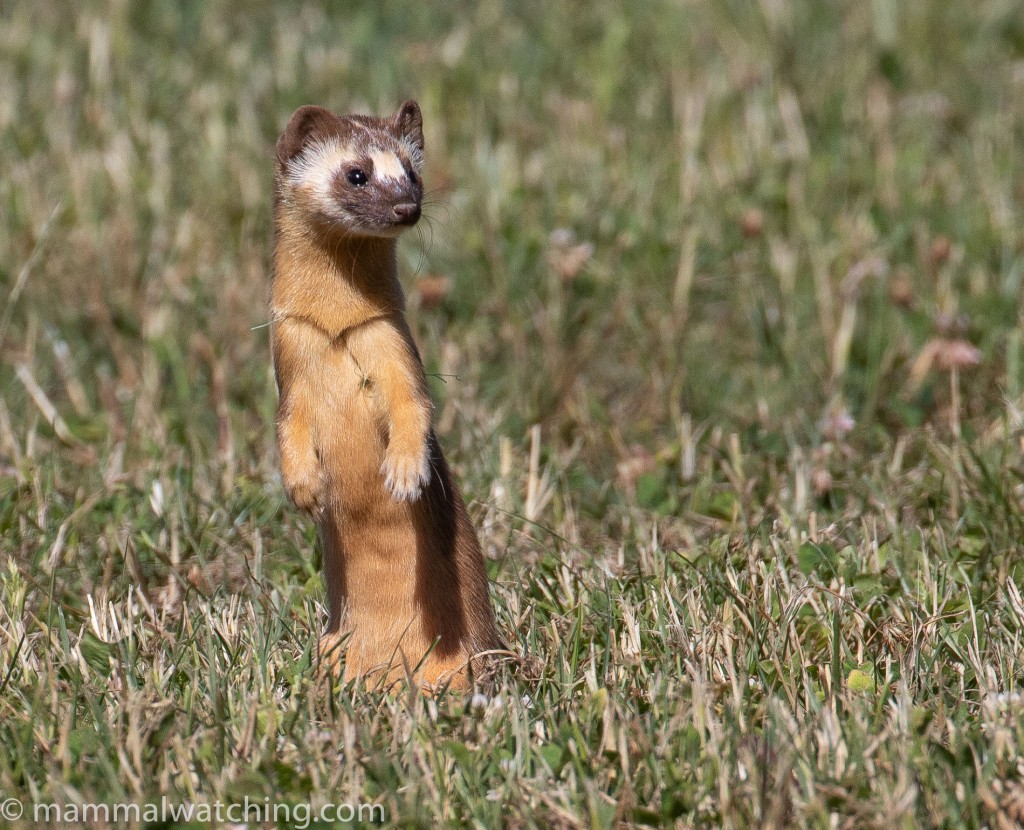 I won’t give detailed information about the weasels’ location because it was given to me in confidence.

Several families have bred in a town park in Sonoma County at least since 2018. And though they usually don’t stay beyond the end of May, this year they have lasted longer, possibly because of less disturbance (thanks Covid-19!). The animals must be well used to being photographed given the number of people taking pictures when I was there and so not shy. They presumably thrive on the healthy population of Botta’s Pocket Gophers. 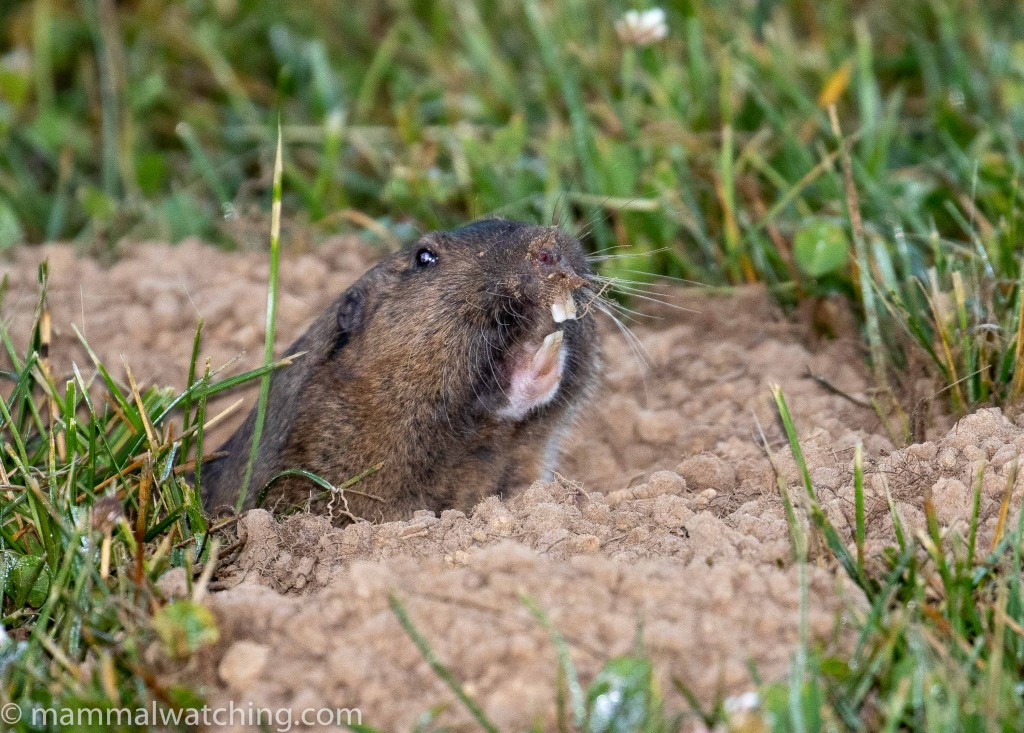 I saw one animal in the evening at 6pm. None at dawn the following morning, but three in the same area at 10am. I suspect all the animals I saw were sub adult given they were a similar size and all seems to be playing – practicing pouncing and more – close to burrows.

They are absolutely beautiful things and well worth the eight year wait!

The animals move around a bit and your best bet of seeing them would be to contact Daniel Dietrich from Point Reyes Safaris: Daniel is a wildlife guide who will show you the weasels if they are around (he took Justin Brown to see them), and many more mammals too including Bobcats (see this report from Stuart Chapman). Unfortunately I wasn’t able to meet up with him but he was able to point me in the right direction.

Thanks to Daniel and also to JoEllen Arnold who first alerted me to the weasels and has been very helpful ever since in letting me know their movements. 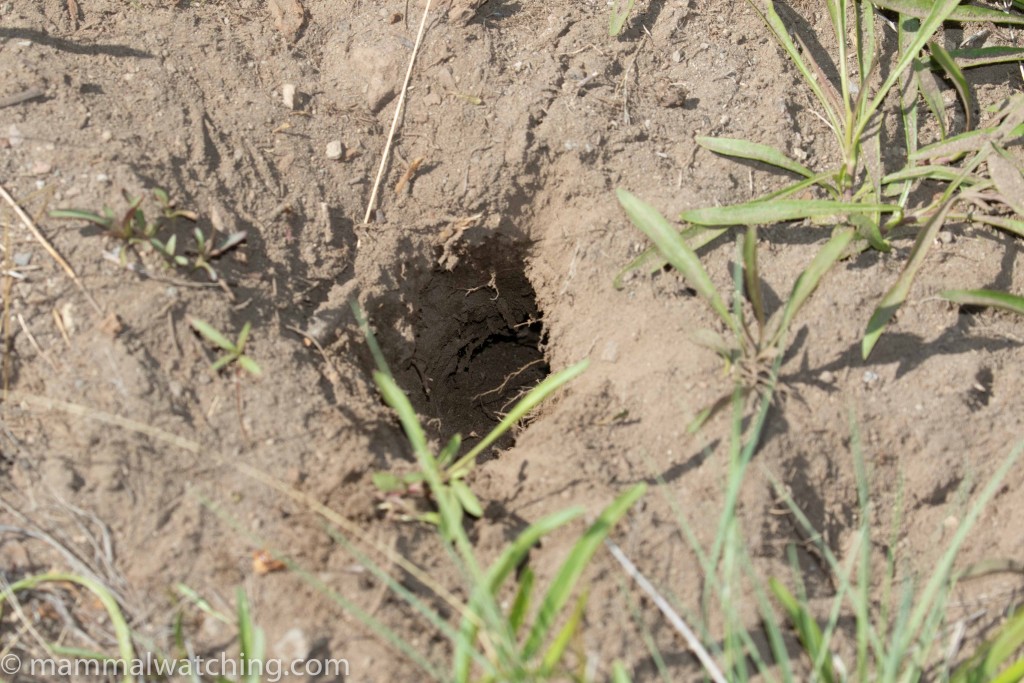 I stopped at Mount Shasta on the drive north to Portland to try to see a Mountain Pocket Gopher. This species is supposed to be fairly to easy to see in Yosemite National Park, as they become accustomed to people and remain active throughout the summer at high elevations. But I had never seen one.

I imagined the there would be gopher burrows scattered around the small town but I couldn’t find any, so I drove up the mountain itself and eventually found a few fresh burrows in grass around McGinnis Springs.

I opened one fresh mound up with a stick and waited. After 30 minutes I glimpsed a flash of Mountain Pocket Gopher fur before it resealed its hole. I opened the entrance up again and 20 minutes later I saw the dirt fly to plug the hole but couldn’t see the gopher (mental note to next time pack a flashlight when gopher hole staking out). Another one for the Want Better Views list. 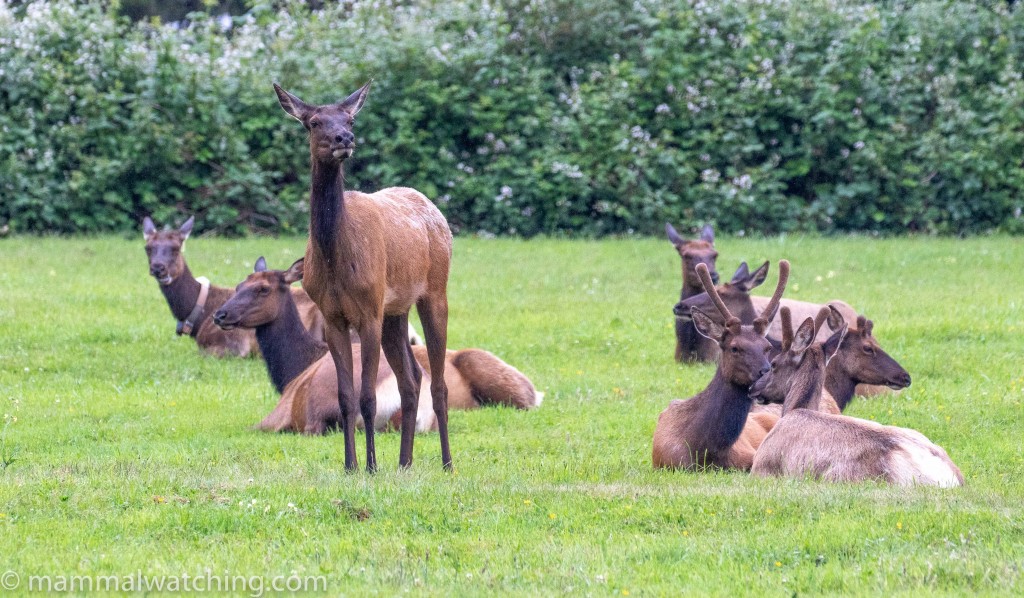 I looked in vain for Sonoma Tree Voles (I couldn’t even find any nests), flying squirrels and Western Red-backed Voles around Arcata including Stagecoach Hill Azalea Reserve where Venkat Sankar saw several. The only mammal of interest was a Pacific Jumping Mouse (Zapus trinotatus) which I saw in my headlights sitting on Bald Hills Road, just past the Lady Bird Johson Grove at about 10 pm. I didn’t get a photo but these are easy animals to ID with their long tails. 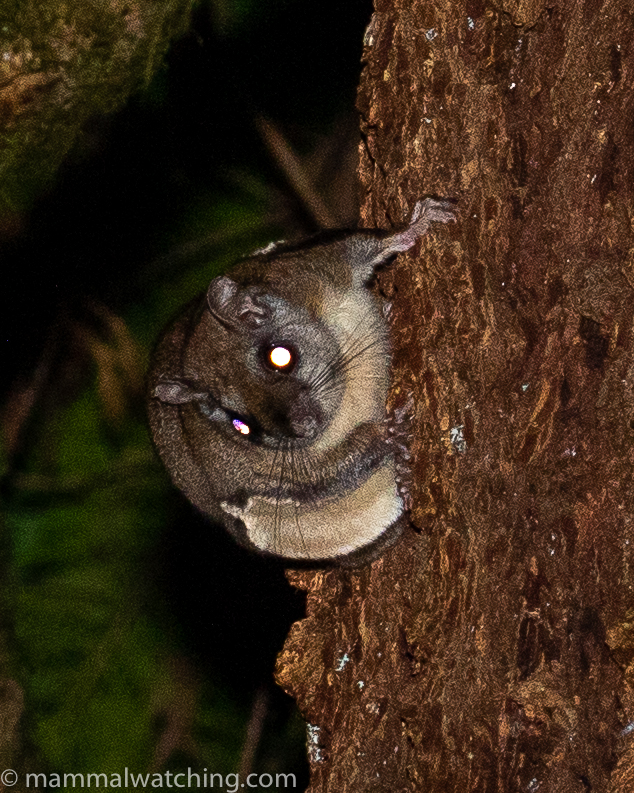 A few years ago Northern Flying Squirrels were split into Northern and Humboldt’s Flying Squirrels. And, annoyingly, the animal I had seen on Mount Rainier was exactly on the dividing line of the two species and could have been either.

I saw a guaranteed Northern Flying Squirrel in Maine in 2019 but still needed to see a Humboldt’s Flying Squirrel before I could again claim to have seen all the US sciurids.

Humboldt’s Flying Squirrel is probably common along most of the California, Oregon and Washington coast especially in old growth forest. I tried the area around Gold Beach mainly because it was a convenient place to break the drive to Portland. 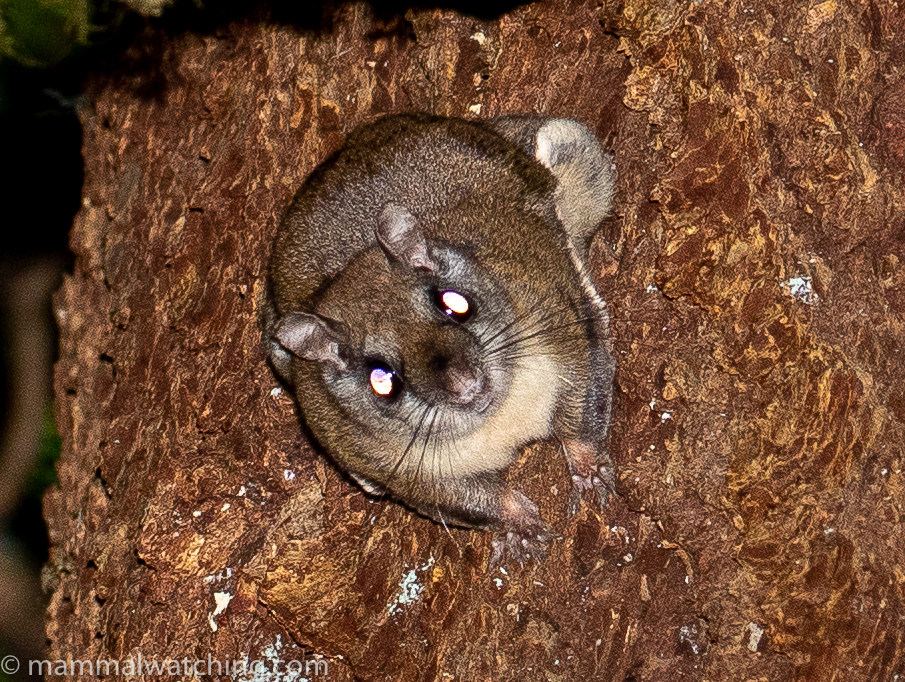 I saw one Humboldt’s Flying Squirrel here, which I noticed first with a thermal scope before it flew over the trail and posed nicely for ten minutes.

I got a glimpse of one, or probably two, more alongside the road close to the parking lot. 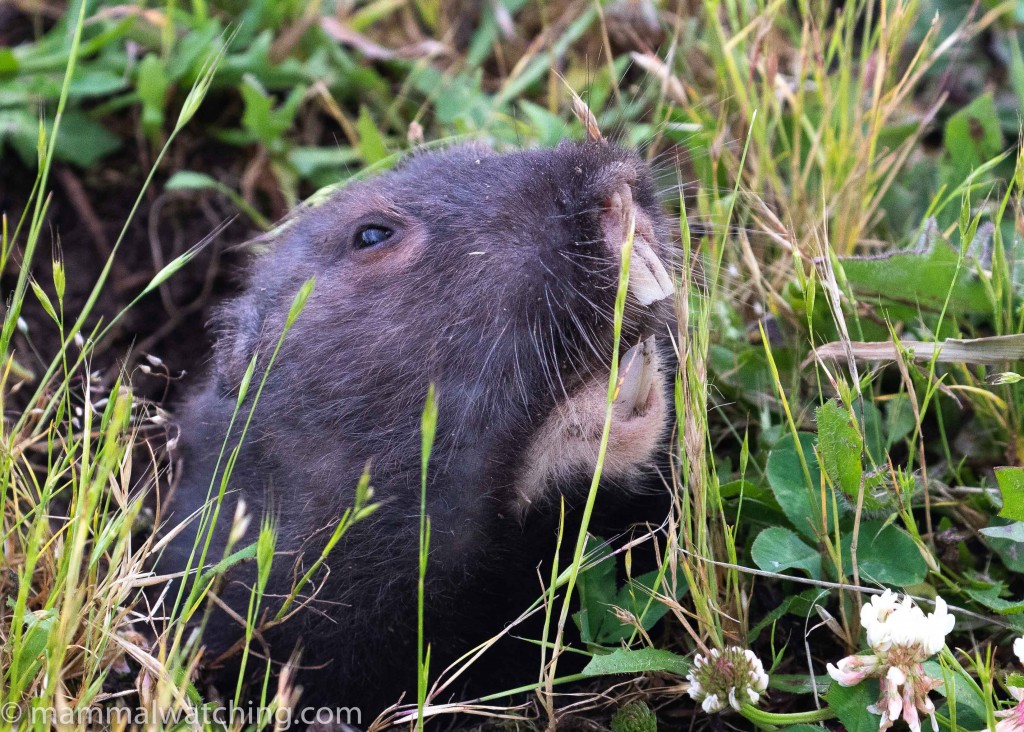 I flew back home out of Portland and was looking in particular for two mammals endemic to the Williamette Valley: Grey-tailed Vole and Camas Pocket Gopher.

I saw what looked like fresh vole activity on the northbound side of the Oak Grove Rest Area on I5, an hour and a half before Portland. But I couldn’t see any voles during a short mid afternoon stake out.

It took me ten minutes to find a Camas Pocket Gopher out of its burrow in the Emerald Estates Park in Bethany here at about 5pm. Though it would duck down every time someone walked past, it only stayed below ground for a few seconds before re-emerging to feed. This is a large pocket gopher, getting up to twice the weight of Botta’s Pocket Gopher. Best advice to see one would be to walk the trail with your eyes peeled and if you see any open gopher tunnels then wait for a few minutes. 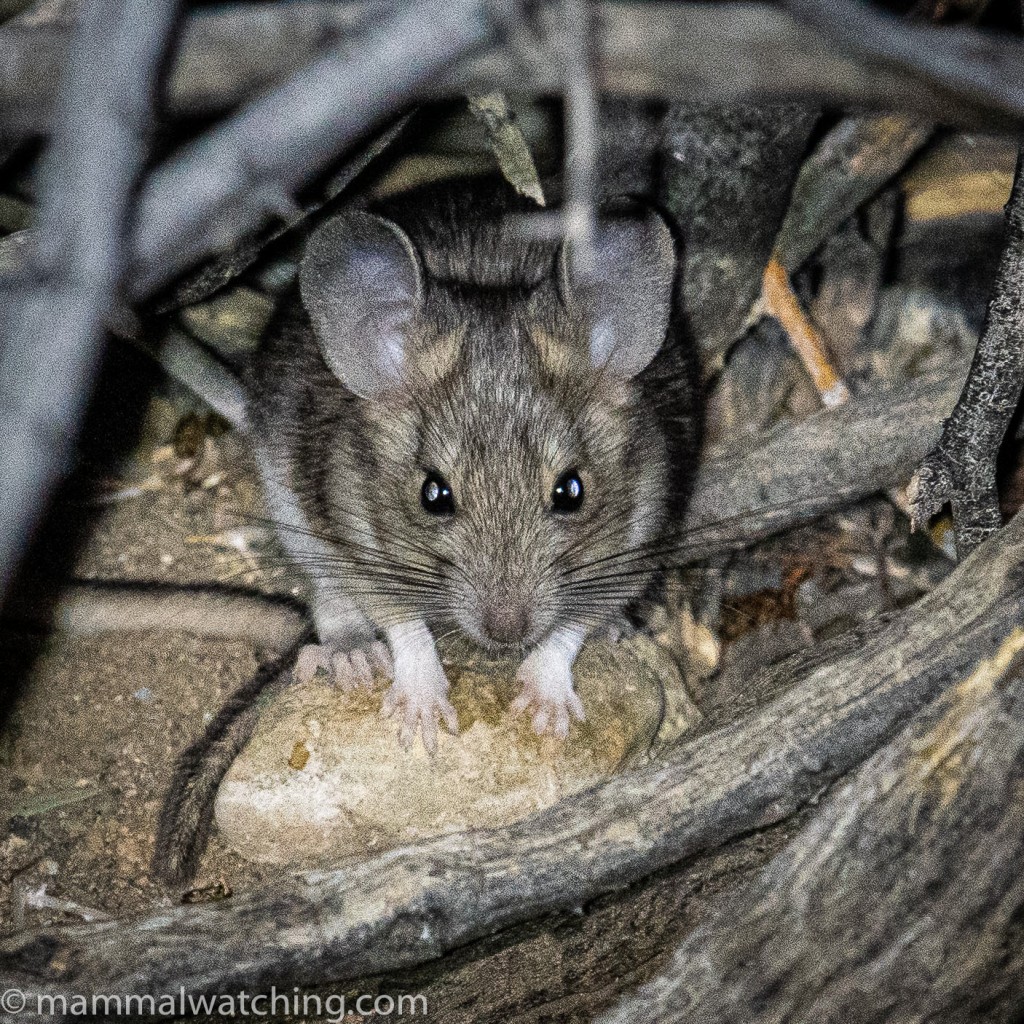